Star-shaped sand is a fascinating attraction in Okinawa, Japan that you should visit at least once in your life. Take a walk along the beaches in Japan in the Okinawa Prefecture, and marvel at the intriguing sand grains shaped like stars. It’s one of the best things to do in Okinawa! Learn more about it in the following sections.

What Is Japanese Star Sand?

Despite its name, star-shaped sand isn’t actually sand. Rather, these “sand grains” shaped like stars are hard shells left over by dead microscopic creatures that lived in the western Pacific ocean many years ago.

These tiny organisms in question belong to the phylum Foraminifera, a group of single-celled protists (organisms that do not belong to any animal, plant, fungi, or bacteria group). In fact, these “sands”  are closely related to amoeba. Throughout their life, they accumulate calcium carbonate from the water, forming tiny shells which they leave behind in the sea when they die. So when you closely look at this so-called “beach sand” under a microscope, you’ll see that it’s actually very porous. 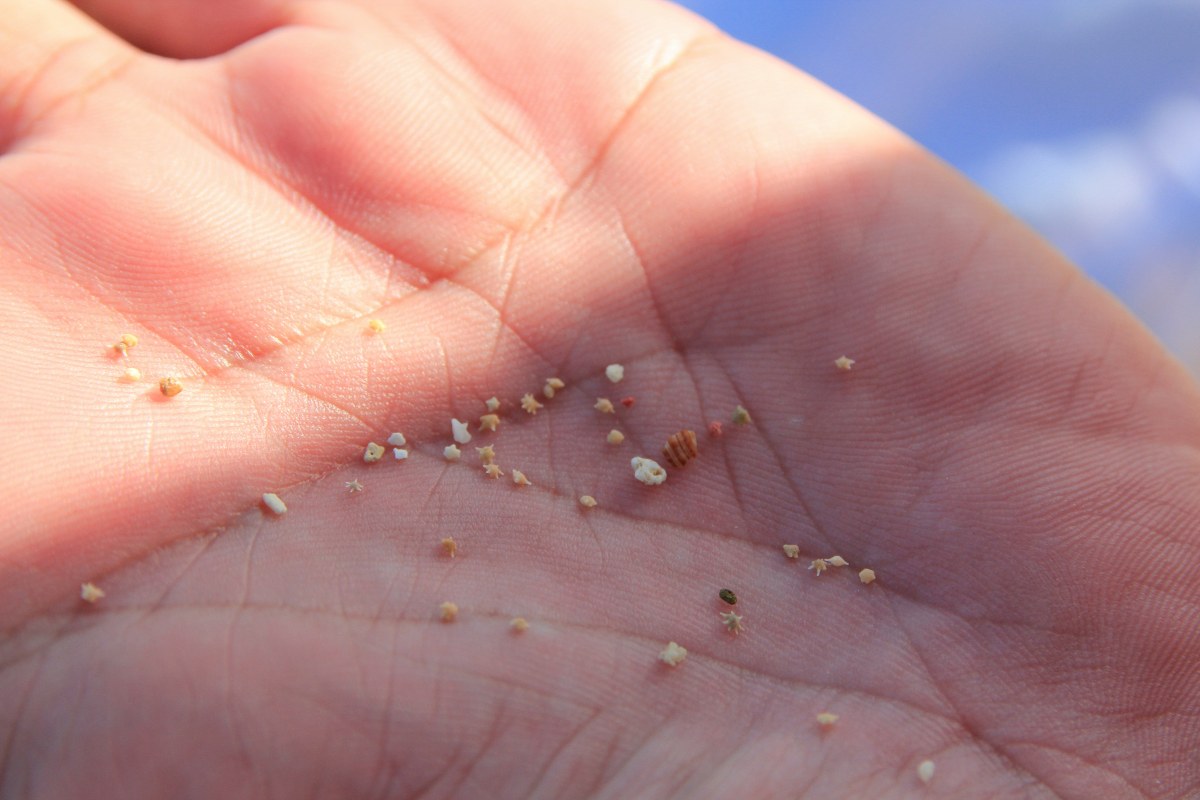 Photo by RaksyBH on Adobe Stock

All in all, there are about 10,000 species that produce these “grains of sand” in varying shapes. So, why is the Okinawa sand a star? The answer is simple: it’s because these star shells are produced by a single species. It can only be found in the reefs of East Asia, washed ashore on certain Japan beaches.

The Folklore About Japanese Star Sand 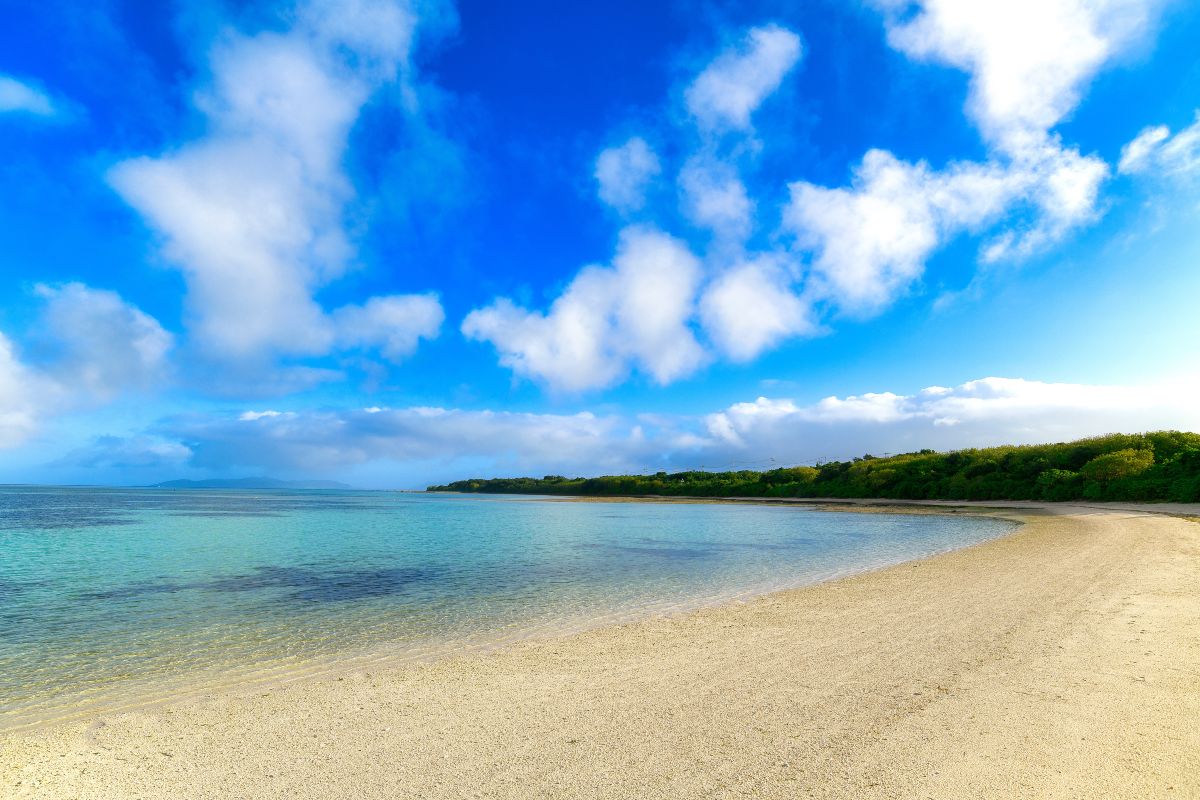 Photo by Segawa7 on Adobe Stock

To the locals, star-shaped sand also bears cultural significance. On the island of Taketomi (Taketomi-jima), for example, they have a folktale about the origins of this peculiar Japanese sand.

According to the legend, the Southern Cross conceived star children with the North Star and bore them on the coast of the island’s white sand beach. The god of the sea wasn’t pleased, so he instructed a serpent to swallow the star children. Only their skeletons remained, washing up to the shore to form what we now know as a star sand beach.

Whether the legend is true remains a mystery but there’s no denying that these star sand beaches make a perfect getaway. Taking a trip to these islands is a great way of immersing yourself in the rich culture of Japan. So ready your beach packing list for this excursion, and you’ll get to learn more about Japanese beliefs while relishing the natural beauty of coastlines with star-shaped sand.

Where to Find Star-Shaped Sand in Japan 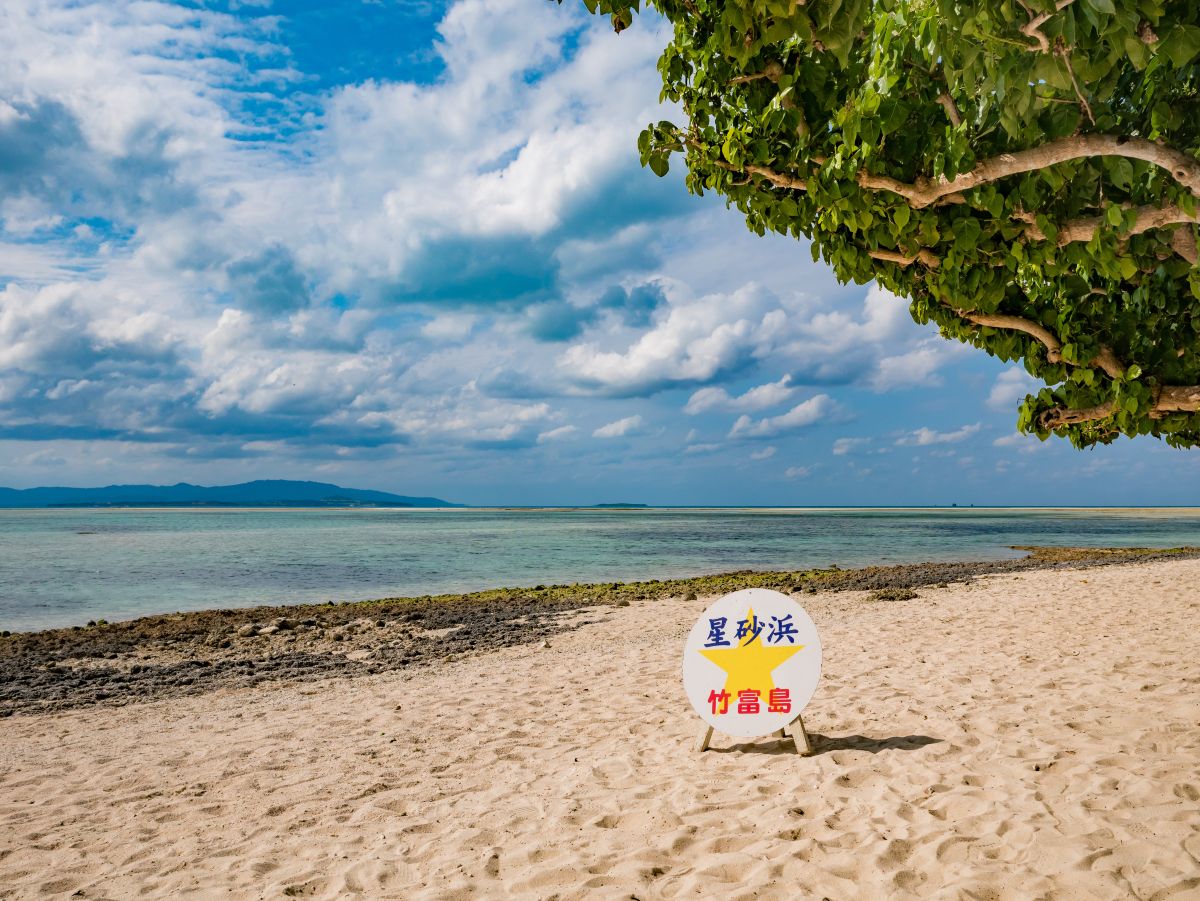 All star-shaped sand beaches are located in the Okinawa prefecture. It consists of 48 inhabited islands in Southern Japan, but you’ll only have to choose among four to see the famed star-shaped sand of Okinawa.

Here are the beach locations to add to your itinerary:

You’ll have the most luck finding star-shaped Okinawa sand on the island of Hatoma. It’s a small area that’s barely a kilometer in diameter, but tiny shells cover most (if not all) of its beaches. Boasting lush greenery, pristine reefs, and a small population, this island is an ideal destination for a quiet vacation.

The island of Iriomote is the bastion of some of the oldest festivals in Japan. Along with thriving traditions, it also boasts thriving forests and marine life. Though to see star-shaped sand in particular, you have to visit a specific Okinawa beach on the island. It’s called Hoshizuna no Hama which literally translates to “Star Sand Beach.”

Another good place to see star-shaped sand is Kaiji Beach in Okinawa, Japan. It’s located on Taketomi Island, another Japanese island that’s rich in culture. Here, you can marvel at the majestic beauty of nature and also learn traditional crafts.

The last Okinawa, Japan beach that you can visit for star-shaped sand is Aharen Beach. It’s located on the island of Takashiki, which is closer to the capital of Okinawa compared to the previous islands mentioned. This is also a good destination for water activities like riding a jet ski or a banana boat, snorkeling, and kayaking.

There are lots of places to explore if you’re planning a trip to the Land of the Rising Sun. Explore the most amazing cities in Japan, and if you get tired of the hustle and bustle, you can always retreat to these remote islands to rewind and explore hidden wonders like the star sand of Okinawa.

When to Visit Okinawa: The best time to visit Tokyo, Sapporo, and other places in Japan varies, but Okinawa is especially great during spring (March to early May) and fall (late September to December).

Why You Should Visit These Star Sand Beaches 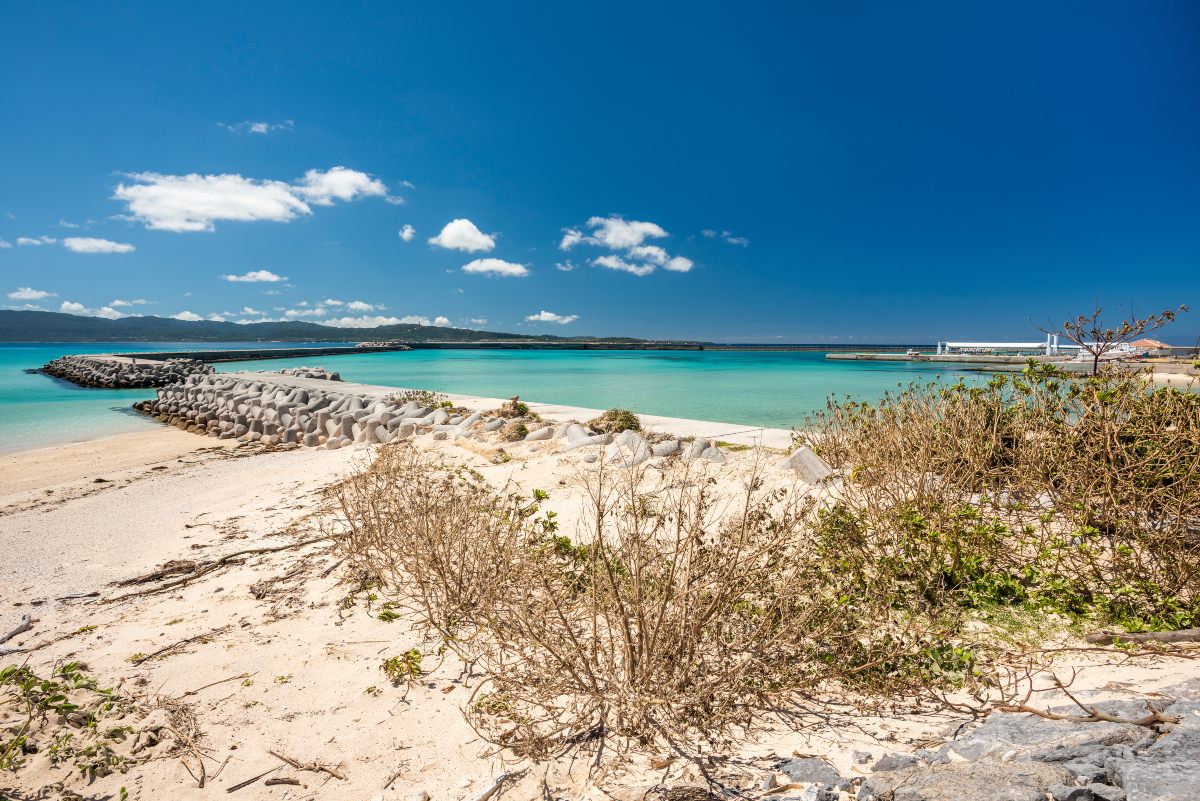 Among other things, star-shaped sand brings tourism to far-flung islands in Japan. Sprawling over certain beaches in the Okinawa Prefecture, these Okinawa star sands give shorelines an extra creamy white color from afar. But what truly sets this destination apart from other tropical beaches is what’s seen up close. 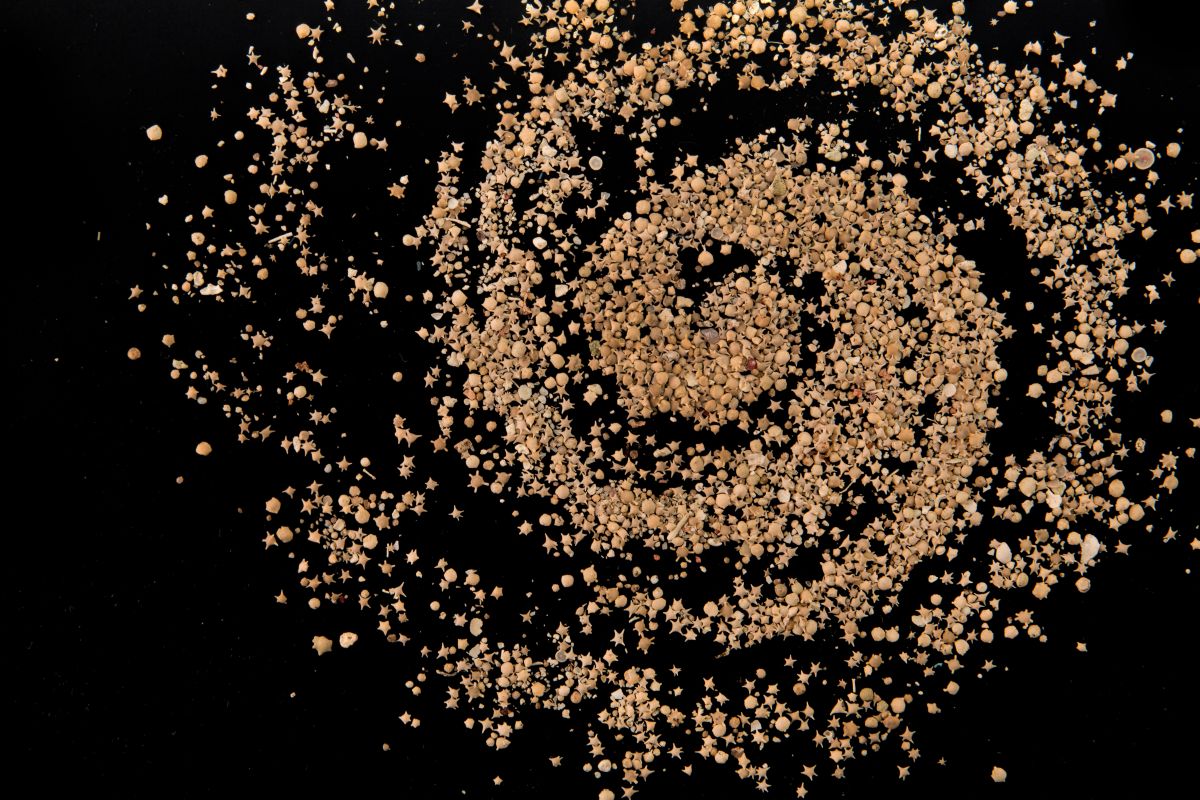 Photo by Mushika on Adobe Stock.

The intricate, star-shaped shells impart a unique charm to the otherwise regular coasts of Japan. Tourists can freely frolic on the sand, and in some places, take some of the star-shaped sand back. In a few tourist shops, you can even find vials of it for sale. And if you are into craft making, you can make resin crafts and other forms of art with these star shells. But on other beaches, people are not allowed to take the shells home. These regulations have been put in place with the hope of preserving the star sand beaches for future generations.

The star-shaped sand of Okinawa is also a valuable resource for science. Scholars and scientists have long been using these exoskeletons to study and understand ancient climate patterns. Scientists are currently studying how to save shorelines from rising sea levels by artificially reproducing these star-shaped sands. So if you love natural science as much as you do traveling, this destination deserves a spot on your bucket list.

Other Fascinating Beaches to Visit Around the World

The star-shaped sand beaches of Okinawa, Japan are among the most fascinating getaways in the world. Put it right next to black sand beaches and pink sand beaches when it comes to destinations that offer one-of-a-kind experiences. You can even try fun activities in the area, like scuba diving! That way, you can fully admire what the southernmost region of Nihon has to offer.