Batanes Philippines may be the country’s smallest province, but it packs a lot of beautiful scenery and landscapes. Find rugged cliffs, stunning seaside views, and ancient houses made of stone. Batanes is also a historically and culturally rich province and has some of the most well-preserved cultures in the country. Its strategic location made it an easy target for invading forces during the war. Today, its location helped further preserve the area’s heritage and simple way of life. In Batanes, you’ll find more hills and mountains than skyscrapers — truly a perfect destination if you want to escape the hustle of the city.

While Batanes isn’t as lively as other island destinations like Boracay, Cebu, or El Nido, you’ll be surprised at the many things you can do here! If you want to go somewhere less crowded or if you’re looking for a place where you can appreciate the beauty of nature, plan a visit to Batanes.


Where Is Batanes, Philippines? 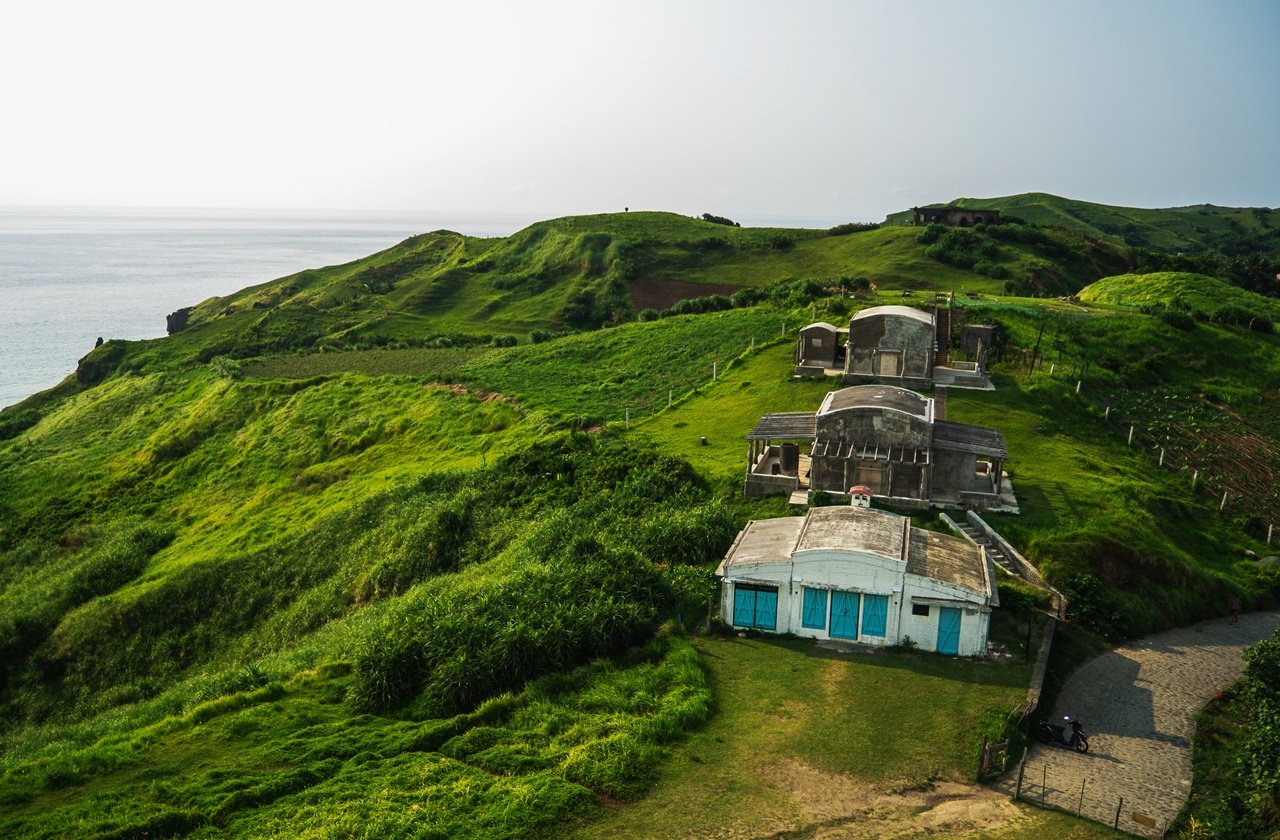 Photo by Rene Padillo on Unsplash


Located in the northernmost part of the Philippines, Batanes is actually an archipelagic province. It is made up of 10 islands, with the three biggest islands, Batan, Sabtang, and Itbayat, the only ones inhabited. Basco is its capital city, located on Batan Island.

Batanes is 162 kilometers away from Luzon with the Babuyan Islands on its south. On its north is Taiwan, the Philippine Sea on its east, and the West Philippine Sea (also known as the South China Sea) on its west.

How to Get to Batanes

The best and easiest way to get to Batanes Philippines is by air. Almost all Philippine airline carriers like Philippine Airlines, Cebu Pacific, and SkyJet have regular commercial flights to Basco Airport (BSO). You can either catch a flight from Manila or Clark to Basco. There are also commercial flights to Basco from Laoag and Tuguegarao, although most travelers prefer flying from Manila or Clark. Travel time takes around an hour to one hour and 45 minutes, depending on your airline and point of departure.

There are currently no ferries or boat trips from Manila to Batanes.

From the airport, you can find tricycles or motorcycles that can take you to your accommodation. On the other hand, you can also walk to your hotel if it’s near the airport.


What You Need to Know About Batanes 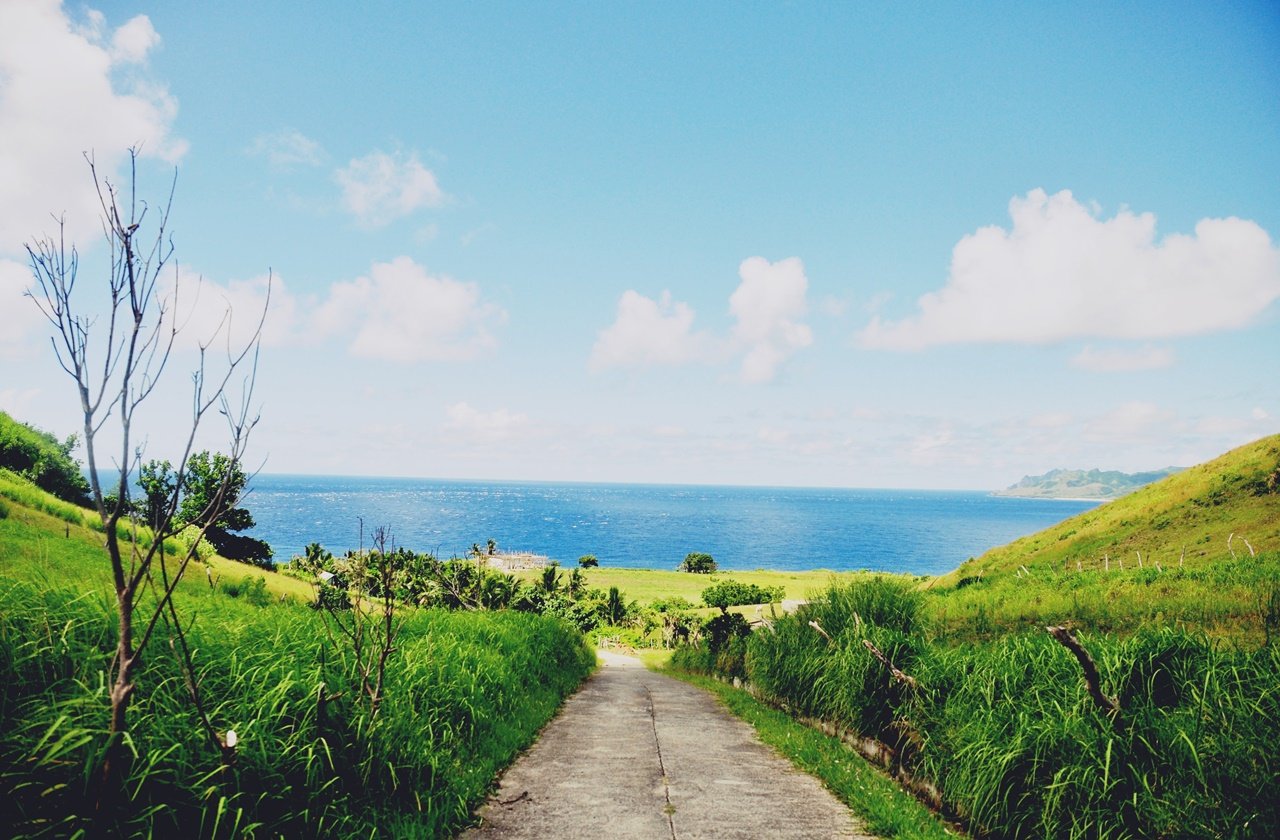 Photo by Lavinia Arances on Unsplash 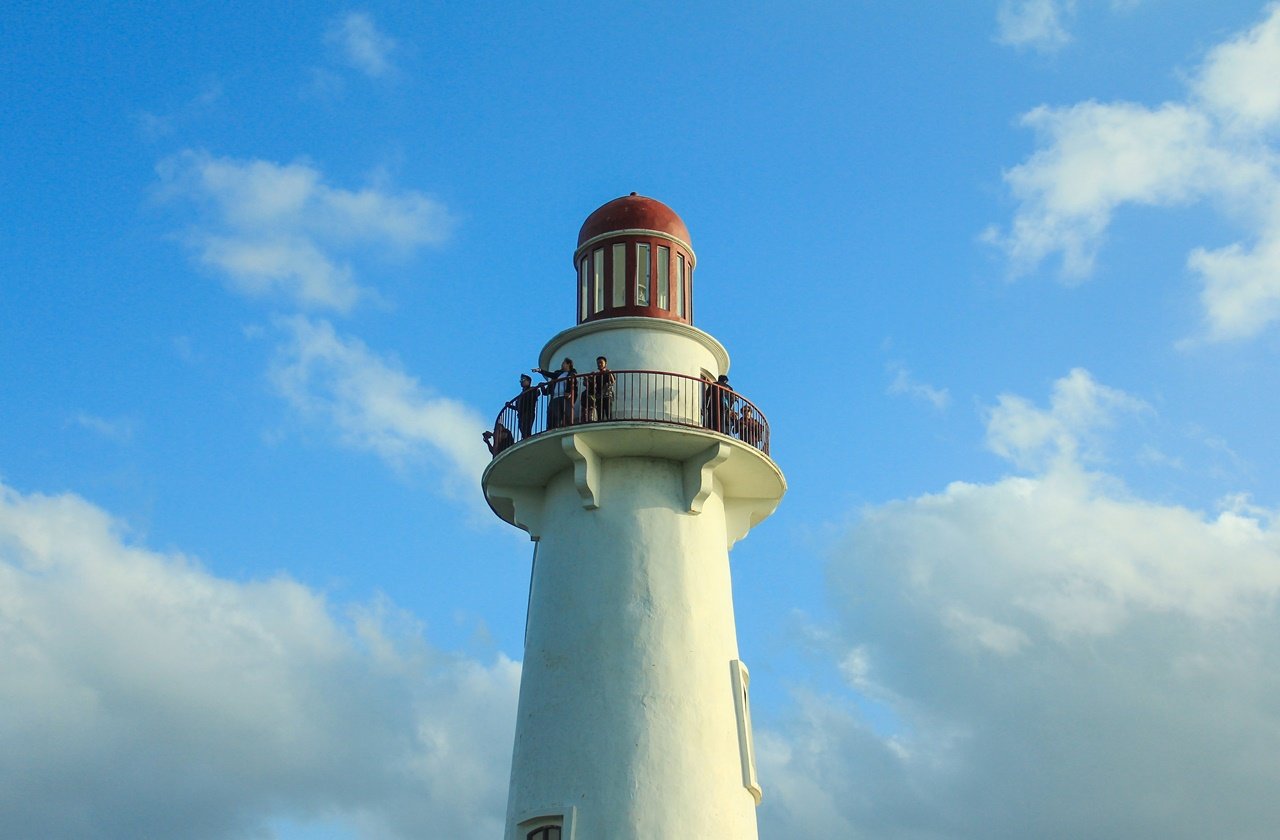 Photo by Rexy Quieta on Unsplash


Like Coron and most destinations in the Philippines, the best time to visit Batanes Philippines is during the dry season, which starts in October and ends in June. From March to June, there is little to no rainfall in the islands and you won’t have any problem exploring the hills, beaches, and mountains. Less rainfall also means that you can enjoy your trip without delays since most of the tourist attractions in Batanes Philippines are outdoors.

If you prefer the cold weather, plan your trip sometime from December to February. However, the weather is cooler but there can be sudden chances of rainfall. Since the province is in the northernmost part of the country, there can be typhoons that pass by the area. Additionally, rainfall and strong winds may lead to possible flight delays and cancellations.

Most budget travelers plan their trips during the off-peak season, which normally coincides with the wet season. Traveling to Batanes from June to November is still okay, but expect rain showers that last for more than an hour. Most typhoons, however, hit the island from August to September, so be sure to avoid traveling within those months.

However, travelers should take note that since Batanes is surrounded by large bodies of water, the weather can be unpredictable. The day may start out sunny, but around noon there can be sudden rain and by afternoon, the skies are clear again.


Where to Stay in Batanes, Philippines 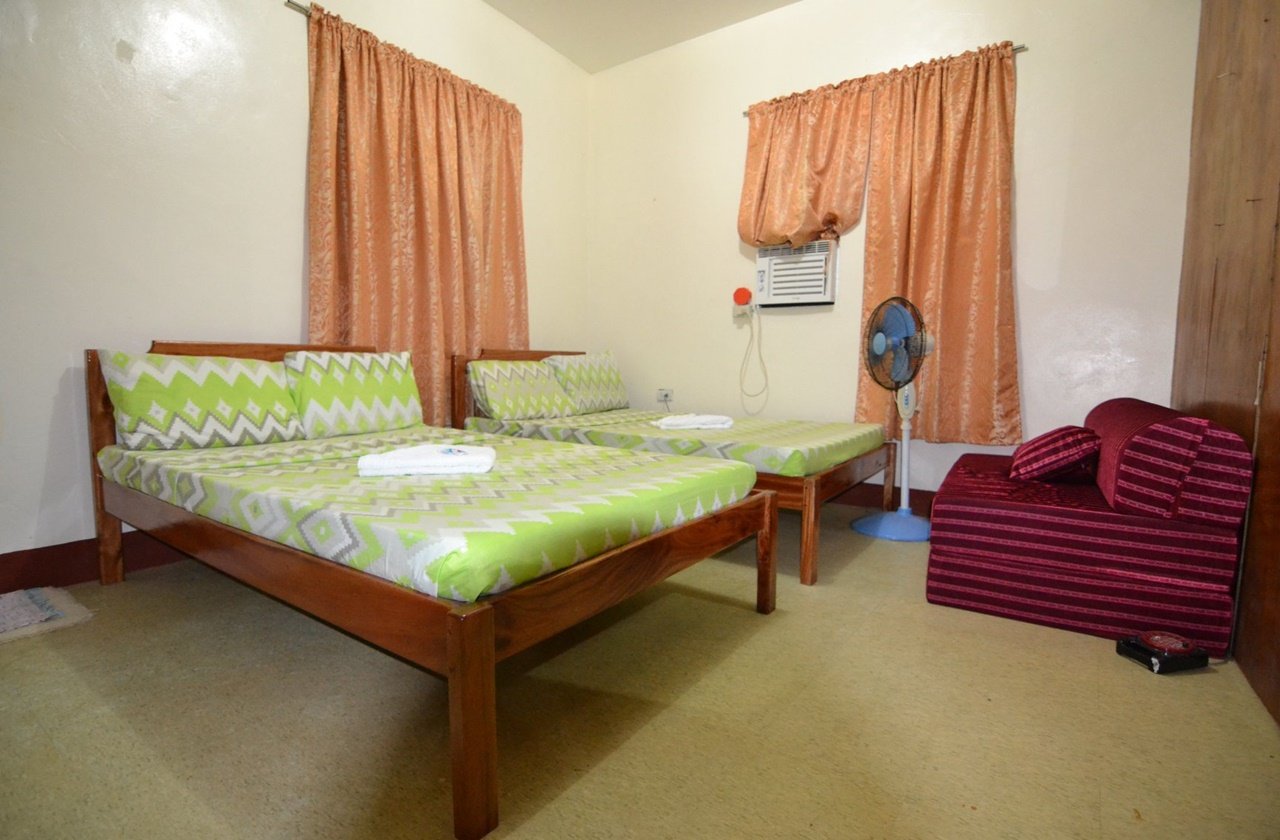 At affordable rates, Marfel’s Lodge is a favorite among budget travelers. It started out as a single house but eventually extended into separate lodges. They also operate other budget homestays and houses for rent for families or those traveling in groups. All houses have a kitchen, free towels, and heated showers, although not all rooms have air conditioning. You can upgrade for a certain fee per day, but given Batanes Philippines’ chilly weather, this shouldn’t be an issue. The lodge also offers tricycle or van tours around the island, and guests can rent bikes for easier navigation around the city. 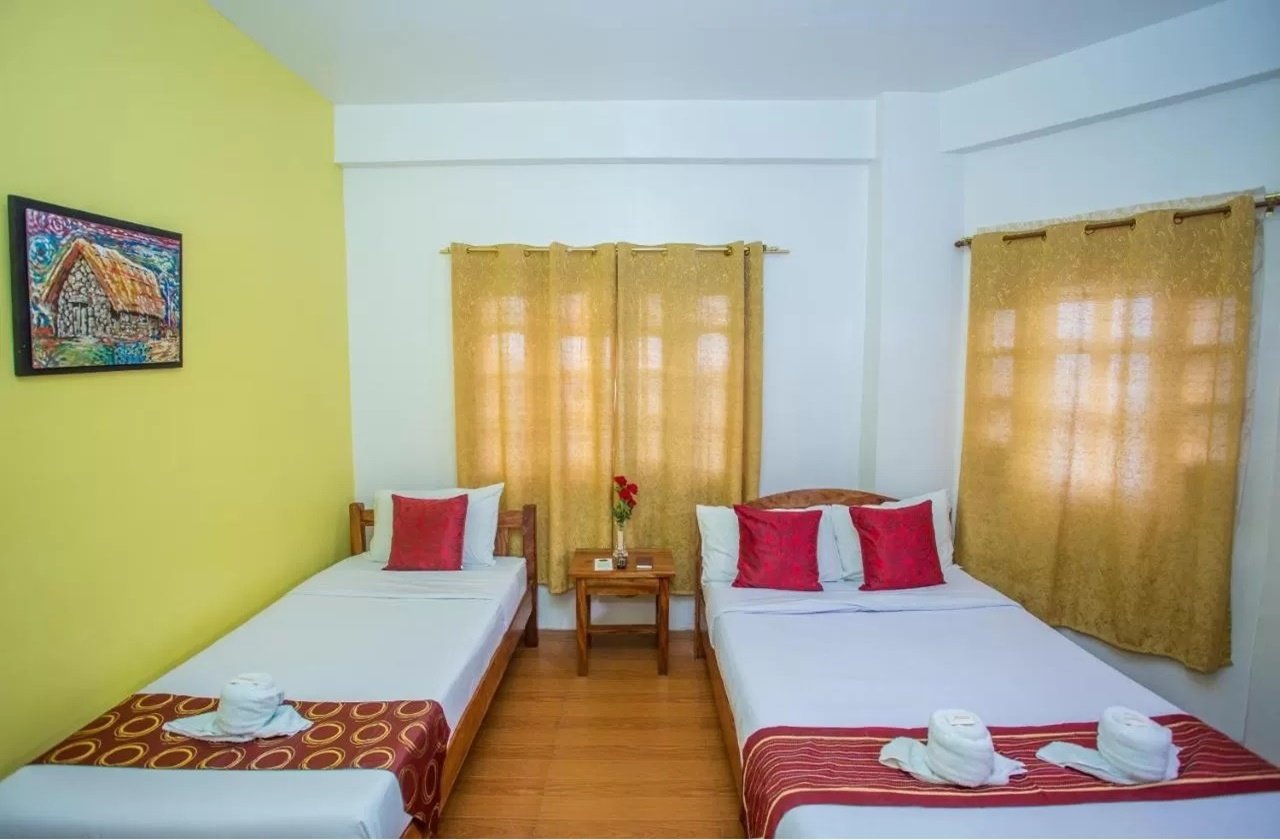 For travelers who want a hotel with a central location, Midtown Inn Batanes is the best choice. Located at the town center, the inn is within a walking distance from banks, restaurants, convenience stores, and the airport. It is also a short 10-minute walk from Basco Lighthouse, making it the best hotel in terms of location. The rooms all have air conditioning complete with private bathrooms, heated showers, and a TV. WiFi is available but only at the reception area. Enjoy free breakfast every day and complimentary drinks at the on-site restaurant. Midtown Inn Batanes also offers airport transfers and private parking for an additional charge. 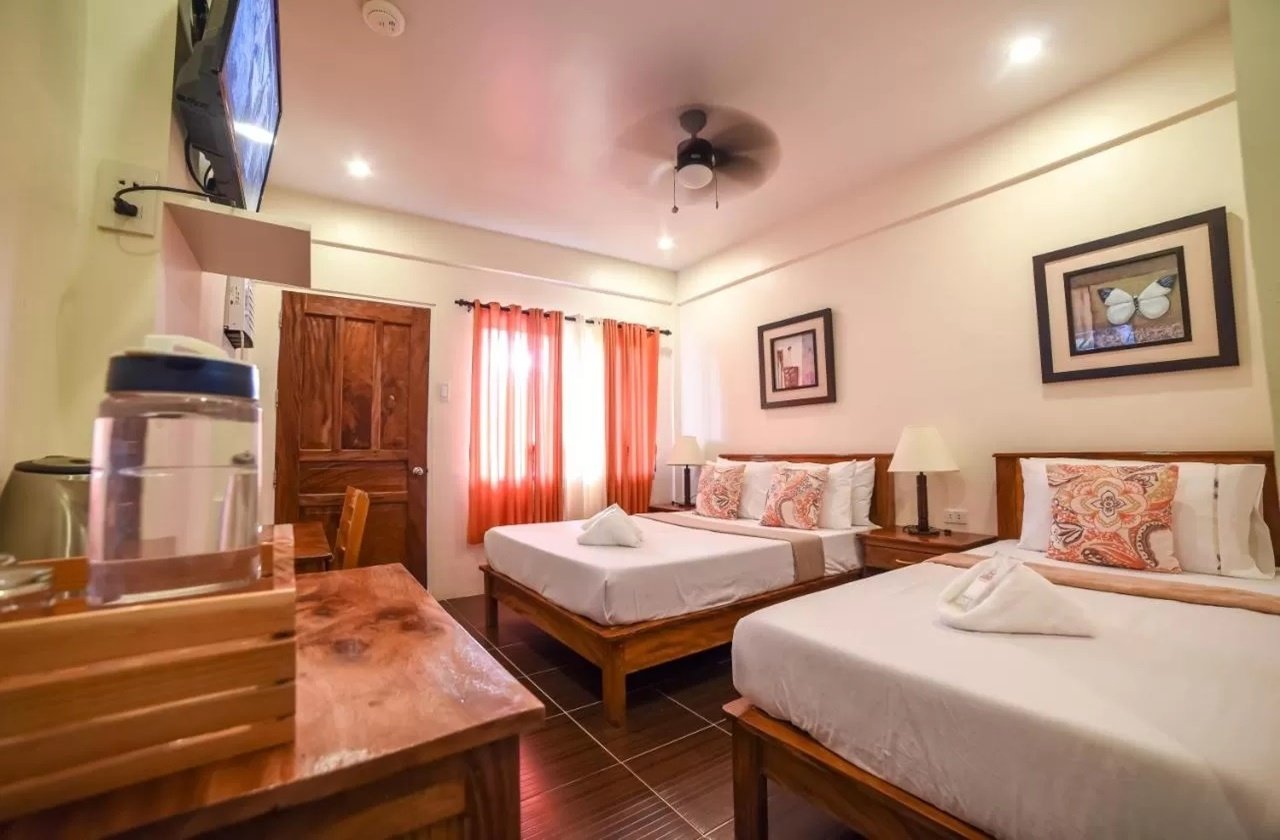 Although Batanes Amboy Hometel is near the main highway, it provides guests with a quiet escape from the city streets. The accommodation is also close to Chanarian Beach, perfect for travelers who want to take a quick dip on the beach or enjoy a leisurely stroll. The hotel has 27 rooms equipped with air conditioning, hot and cold showers, flat-screen cable TV, and views of the sea or the gardens. Travelers also prefer staying at Batanes Amboy Hometel because of the free WiFi connection, a rare perk among hotels and guesthouses on the island. Aside from Internet connection and beachside access, the hotel offers free shuttle services to and from Basco Airport. 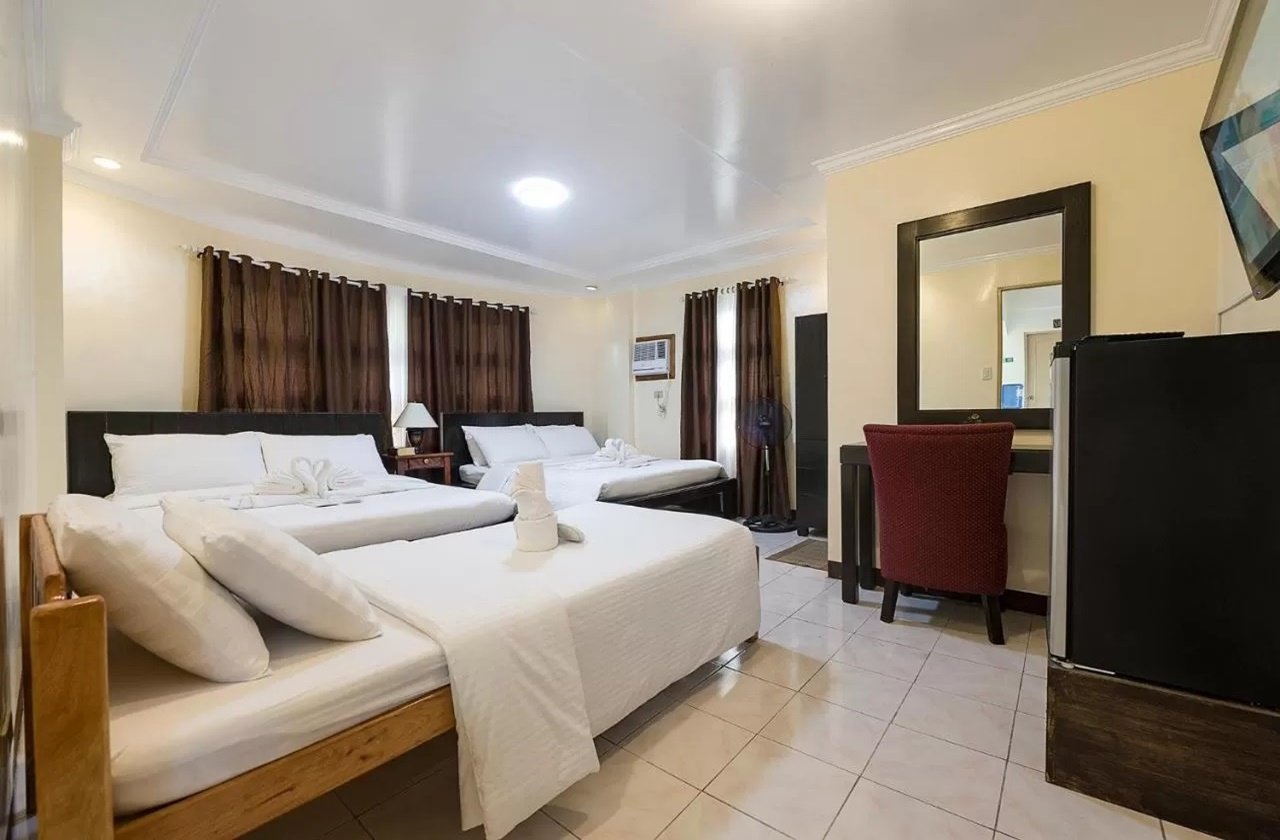 Batanes Seaside Lodge & Restaurant prides itself on being one of the first hotels in the whole Batanes province. It offers top-quality amenities at an affordable price with two branches around Basco. All rooms have air conditioning, a wardrobe, desk, private bathroom, and a flat-screen TV. The hotel is also near the airport and known attractions like Basco Cathedral, Basco Plaza, and Valugan Boulder Beach. Enjoy continental or a la carte breakfast at the on-site restaurant. Batanes Seaside Lodge & Restaurant also arranges land tours which include registration fees and permits, transfers, and meals. 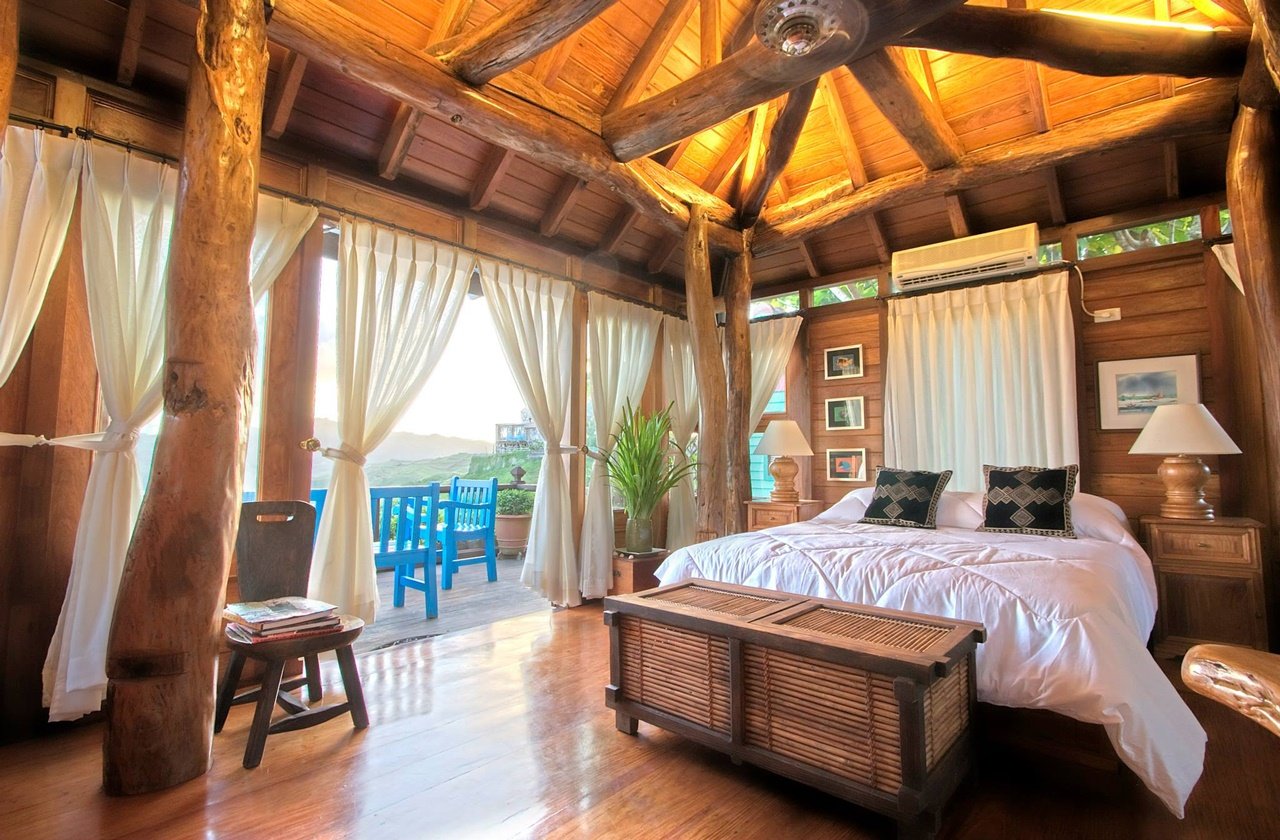 Nestled on a hilltop overlooking the Luzon Strait, Fundacion Pacita is one of the most beautiful places to stay in Batanes. The hotel is a 5 to 10-minute walk away from the town proper and is also close to popular landmarks like the Basco Lighthouse and Valugan Beach. Its 12 rooms have unique interiors and design by Pacita Abad, an Ivatan artist. Aside from its on-site cafe, the gardens and villas are a must-visit, even for those not staying at the hotel. Although a stay at Fundacion Pacita doesn’t come cheap, the views and overall stay in the hotel are worth every penny. Additionally, all proceeds from every stay go to local livelihood projects and conservation efforts.


Things to Do in Batanes, Philippines 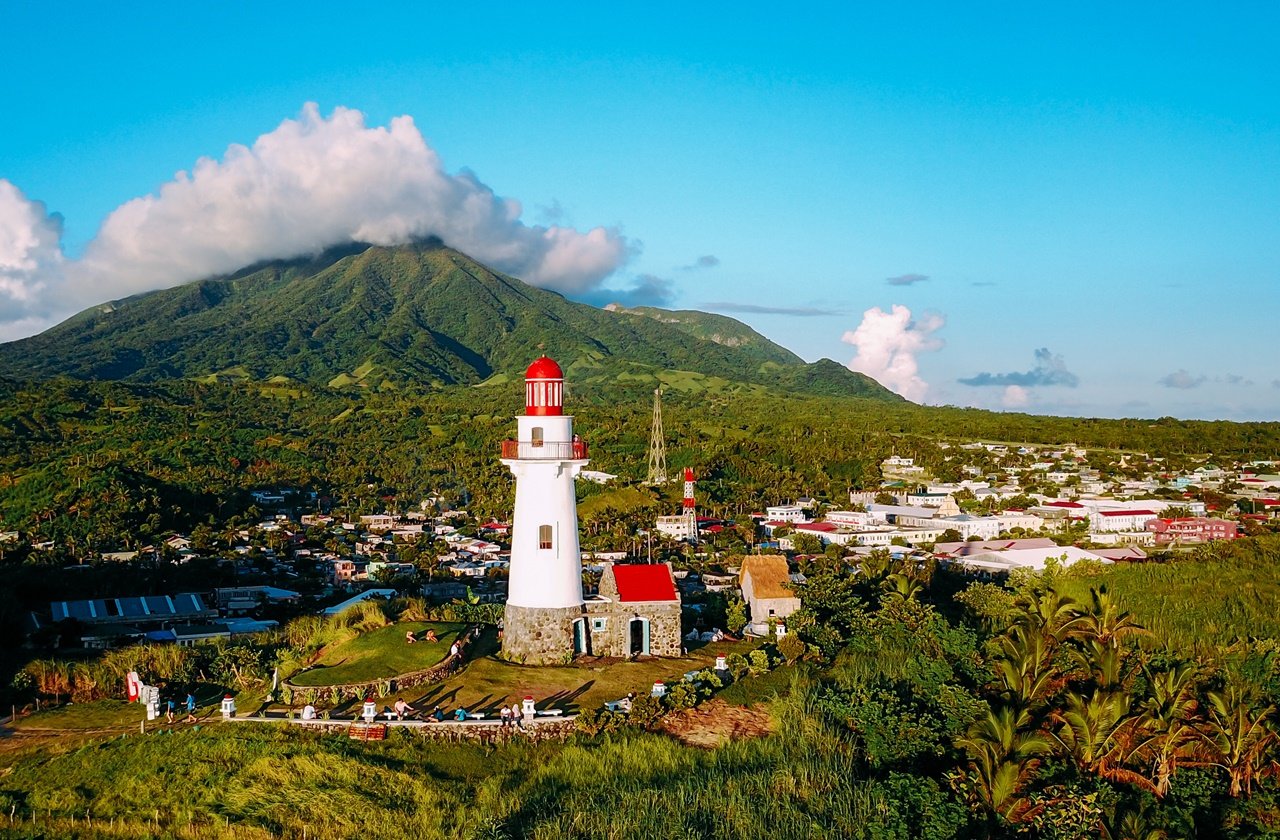 
North Batan is one of the most popular and quintessential places to visit in Batanes Philippines. This part of the island includes vast hills, a picture-perfect lighthouse, and a stone chapel perched on top of a hill. It includes the following tourist attractions:

Although North Batan has two popular beaches, its rocky shore isn’t ideal for swimming. A day trip around North Batan can take around half a day or a whole day. This depends if you choose to venture alone or join an organized tour. Nonetheless, this is the first step into discovering the beauty of Batanes Philippines.


Go on a Day Trip to South Batan 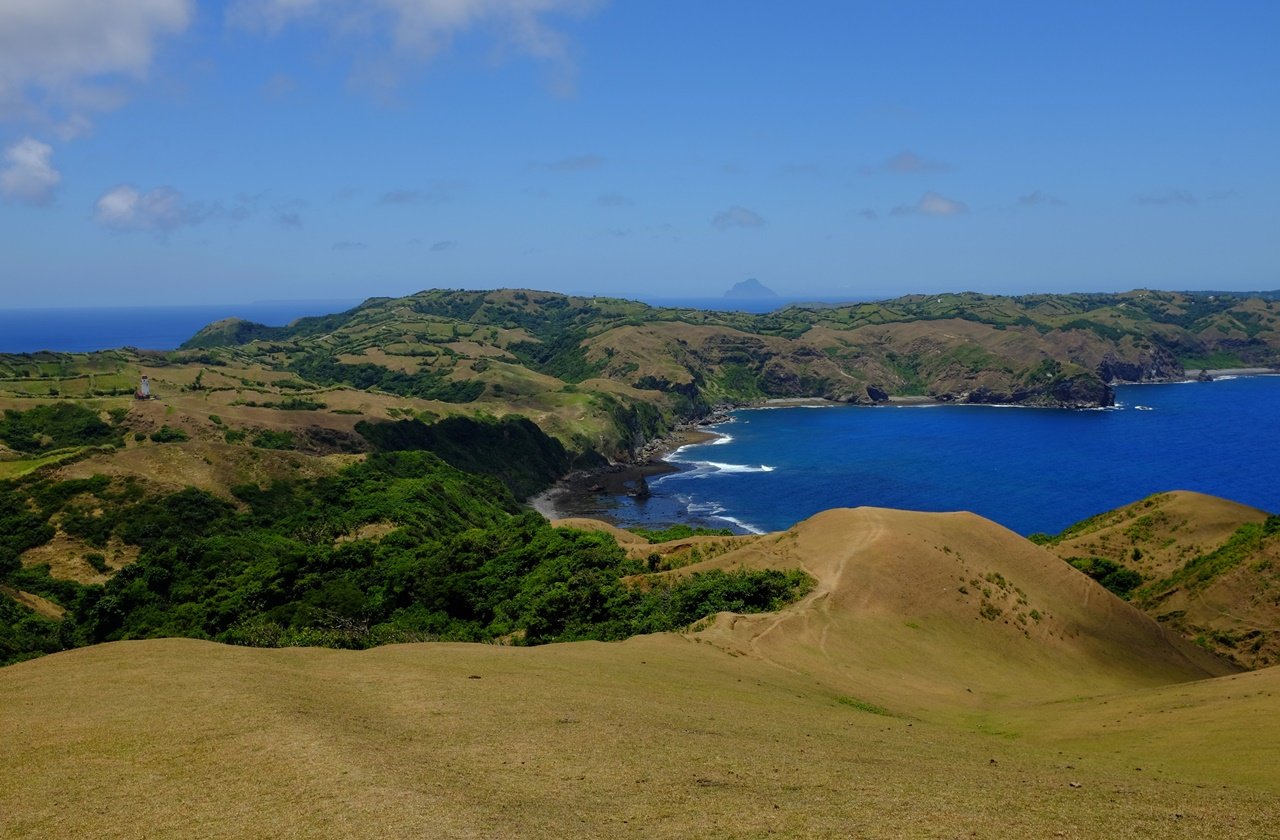 Photo by sulit.photos on Adobe Stock


Unlike North Batan, South Batan has plenty of attractions, including a lighthouse, several beaches, and stone houses. Although the list of attractions and landmarks in South Batan is quite long, here are some of the must-visit spots:

Given the number of tourist hotspots in South Batan, it normally takes a day or more to explore the place. This is also one of the places where you can take a dip on the beach, so make sure to bring appropriate swimming attire, extra clothes, and sunscreen! 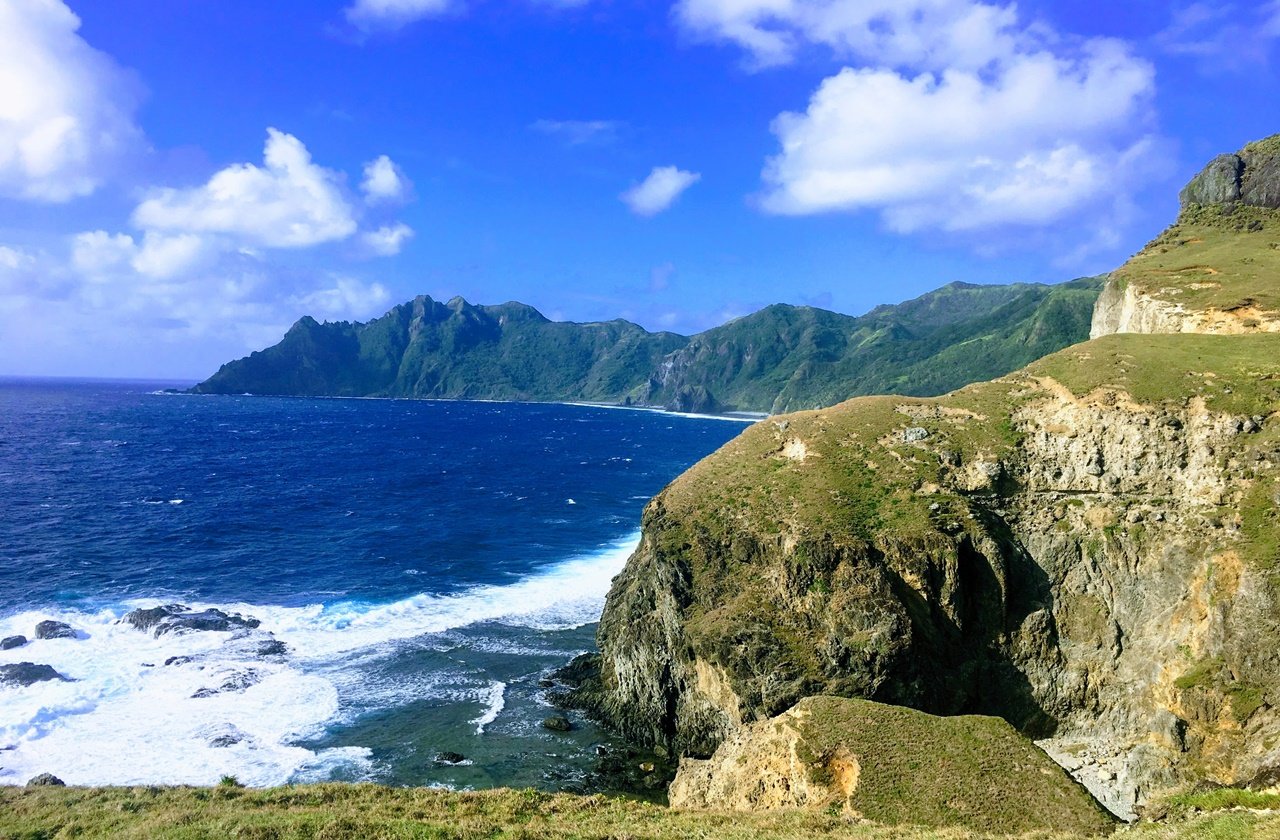 Photo by Samaria on Unsplash


Board a faluwa, a traditional open-deck boat, and head to Sabtang Island. This is one of the three inhabited islands in Batanes Philippines and is home to the beautiful Sabtang Lighthouse. On the island, you’ll see traditional stone houses, gorgeous beaches, and more. Here are some of the island’s main sights:

There is only one trip from Sabtang back to Batan, so make sure to ask the boatmen or the locals when the last trip is. Otherwise, you can choose to stay overnight and make the most out of your stay on the island. Although there aren’t that many hotels on the island, you can stay at guesthouses and homestays for an affordable overnight price.


Discover the Natural Wonders of Itbayat 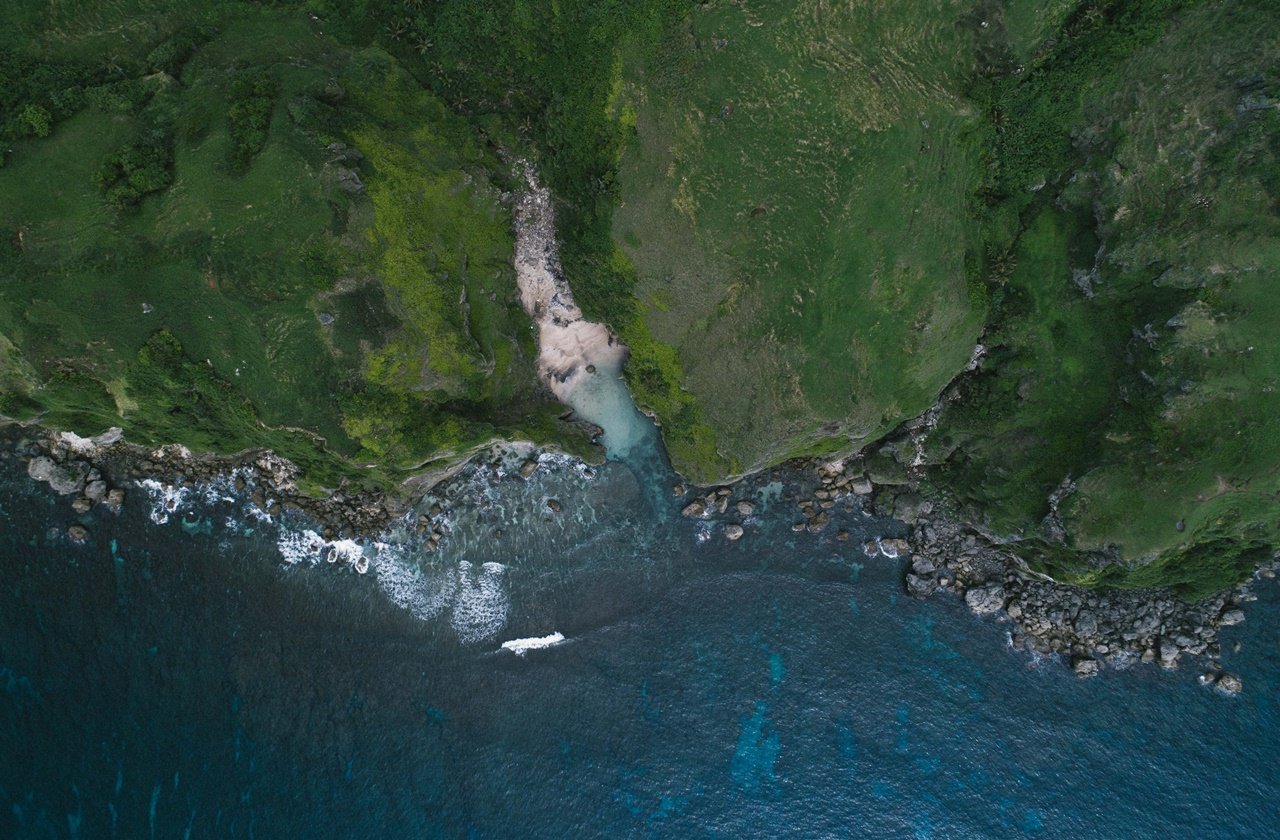 Photo by JC Gellidon on Unsplash


Itbayat Island is the largest island in all of Batanes Philippines and is also one of the most unsettled. The island offers unparalleled cliffside views, rugged yet scenic nature trails, and quiet but charming life. If you plan on visiting Itbayat Island, don’t miss these landmarks and places:

Take note that boat trips to Itbayat are limited and subject to weather conditions. If you have a flexible travel itinerary, don’t miss a visit to Itbayat Island! Like Sabtang Island, there are no hotels, but you can stay at local guesthouses and homestays where you can mingle with the locals.

With unspoiled lands, rugged cliffs, and pleasant meadows, Batanes Philippines is the perfect destination for travelers who want to step away from bustling cities and lively beaches. You’ll find few commercial establishments and zero high-rise buildings and only traditional stone houses. Its distance from Luzon also helped preserve the heritage of the Ivatan people. Being away from the mainland also gives the islands their rural charm, with a life away from modern technology.

While most travelers overlook the province and instead visit classic destinations like Cebu, Palawan, or Boracay, Batanes is a welcome change for those who want to see a different side of the Philippines.