San Diego is one of those great places on earth that really has it all. The city offers picture-perfect beaches, a thriving downtown, and plenty of historical interest. There are so many things to experience in this beautiful city.

The locals are relaxed and laid back, which probably has to do with their surroundings. It’s sunny year-round, you can play beach volleyball, surf, or just sunbathe at pretty much any time of the year. On top of that, the city has plenty of cultural activities and a thriving downtown scene.

The city was originally centered around one of the Spanish Missions along the Camino Real. Today, San Diego is a thriving city with a bustling downtown and miles of beaches.

The coastline itself is diverse, with both white sand beaches and rocky shoreline cliffs. The city is special for so many reasons and a San Diego vacation is sure to leave a lasting impression on any visitor.

Things to do in San Diego

San Diego is a place that has something for everyone. There are places to visit in San Diego for people who are interested in wildlife, architecture, history and more. A San Diego vacation can mean many things, whether you’re looking for a city escape or a beach vacation. In fact, with such a variety of activities in one city, you will never run out of things to do!

Take in the Wonders of Balboa Park 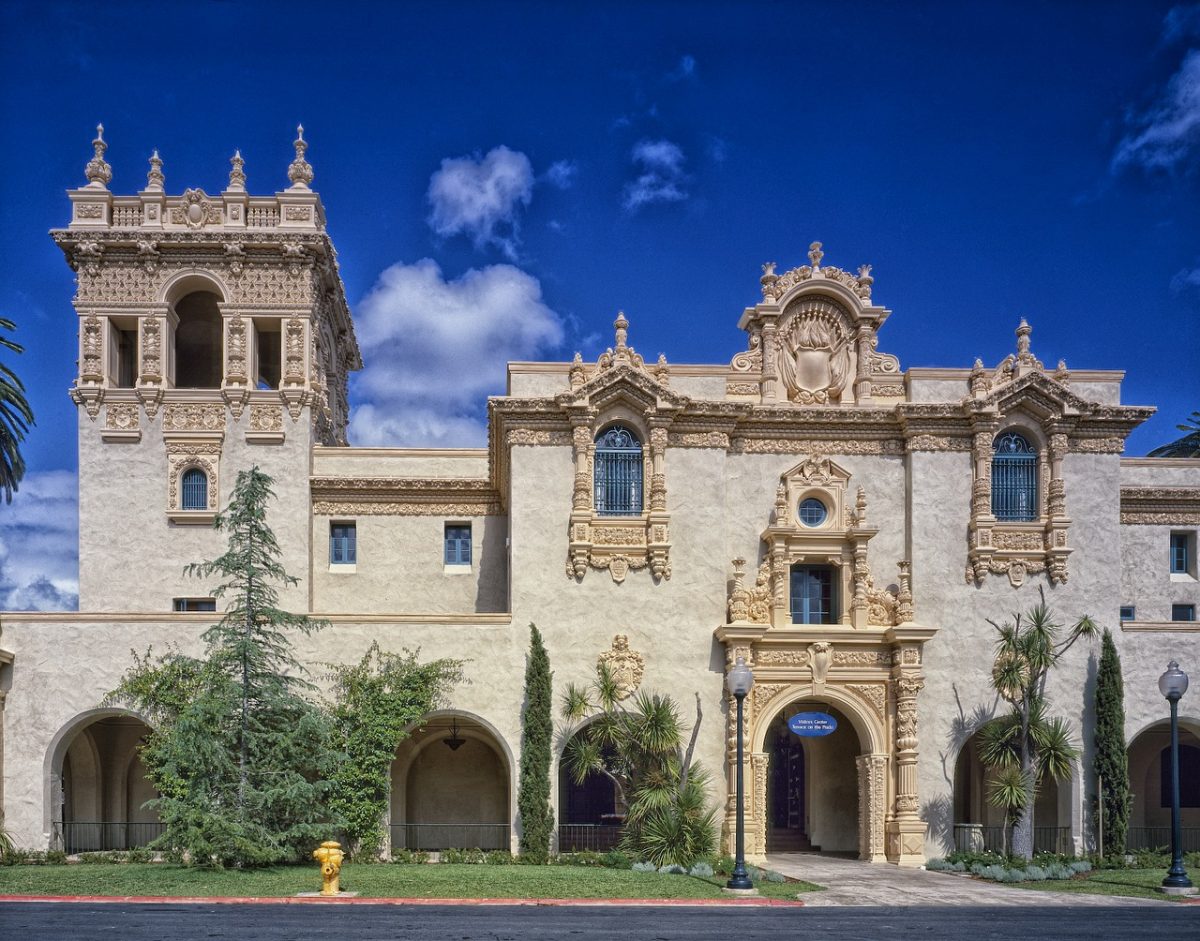 Balboa Park is a favorite gathering place for locals and visitors alike. The space is a 1200-acre park in the middle of San Diego with lots of different things to explore. In fact, it’s the largest urban park in North America, even larger than Central Park. Most of the buildings in Balboa Park were built for the Panama-California Exposition in 1915. Later, the city added more buildings for the California Pacific International Exposition in 1935.

Balboa Park has an impressive Botanical Building with lots of tropical plants on display. Wandering around will show you plants from all over the world right in one location. It’s a dreamy place that is often the site of professional photo shoots. There is also an outdoor cactus garden which has been in Balboa Park since 1935. Another favorite outdoor space for visitors is the Japanese Friendship Garden.

Locals love wandering around the historic Spanish Colonial Revival buildings. Walking in Balboa park is like walking in a different country and era altogether. There are also 17 museums within Balboa Park. These range from the San Diego Natural History Museum to the San Diego Air and Space Museum and everything in between.

Check the calendar of events happening at Balboa Park during your trip to San Diego. There are frequent events and arts shows offered for the public. Some of the best public events are their symphony orchestra concerts and the free weekly concerts every Sunday in Spreckels Organ Pavilion. Balboa Park even has its own Old Globe Theater for live theater performances.

Balboa Park is also the location of the world-famous San Diego Zoo, although a visit to the zoo is worth an entire day itself. The Zoo was originally built as part of the California Expositions within Balboa Park and has evolved to the conservation center that it is today. It is the most visited zoo in the United States with over 4 million visitors per year.

The San Diego Zoo is one of the best places to visit in San Diego and is the largest zoo in North America. It houses over 3500 animals from 650 different species. The zoo is one of the pioneers in the concept of cageless exhibits, where natural barriers like moats keep the animals safely in their habitats. The zoo is also unique in how it tries to replicate the natural habitat as much as possible. In fact, most of the animal habitats feature several species that coexist in the wild.

Its claim to fame is that it was one of the few zoos in the world with a successful giant panda breeding program. Conservation is at the center of the zoo’s mission both breeding and reintroducing animals into the wild. The Zoo dedicates lots of time and money on habitat conservation projects in 45 countries all over the globe. In fact, they have reintroduced over 44 species back into the wild, including the almost-extinct California condor.

It’s a thrilling and educational experience to spend the day at the zoo and the San Diego Zoo is one of the best in the world.

Have a Wild Experience at San Diego Zoo Safari Park 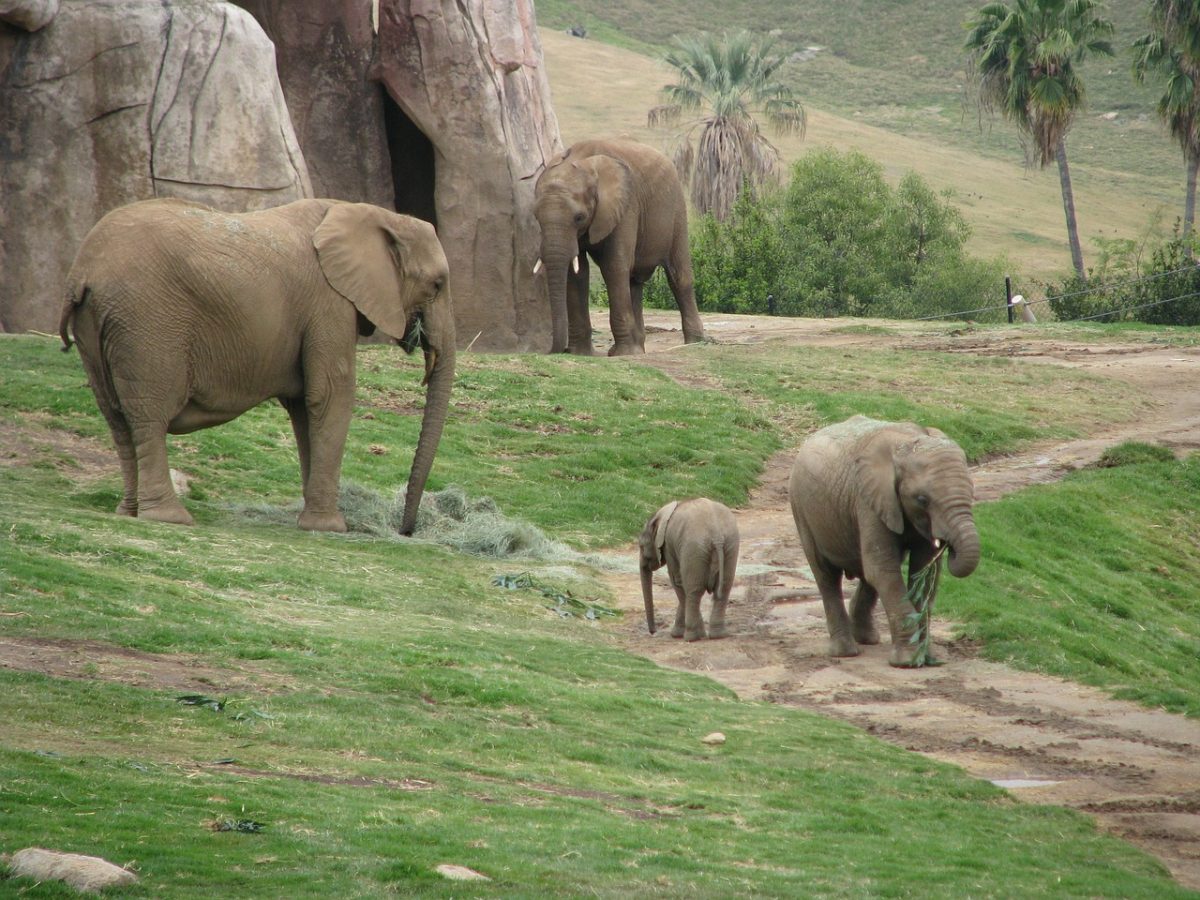 Photo by kelkel118 on Pixabay

The San Diego Zoo Safari Park is actually an open-air animal habitat and one of the most unique zoos in the world. The animals live in free-range enclosures which groups animals from similar habitats together. There are also large tiger and lion habitats, though these are separated from the rest of the animals for obvious reasons!

To experience the park and see the animals, visitors can take various types of Safaris, mostly by vehicle. However, there is even have the option to zipline over the enclosures. Imagine getting a bird’s eye view of the amazing animals below you!

Believe it or not, the wild animal park offers the opportunity to do overnight tent stays in the park. You’ll get to do Safari walks and to see the animals after the crowds have gone home. Guests can sleep in Safari tents right next to an animal enclosure with rhinos, giraffes, antelope, and more. We just wonder how you’ll get any sleep just knowing that these majestic creatures are all around you.

The Safari Park’s main goal is species conservation. One point of pride for the Safari Park was their role in rejuvenating the population of endangered California Condors. In 1987, there were just 22 Condors in the wild. Thanks to the breeding program and conservation efforts, the population is now 369, with 191 Condors reintroduced into the wild. 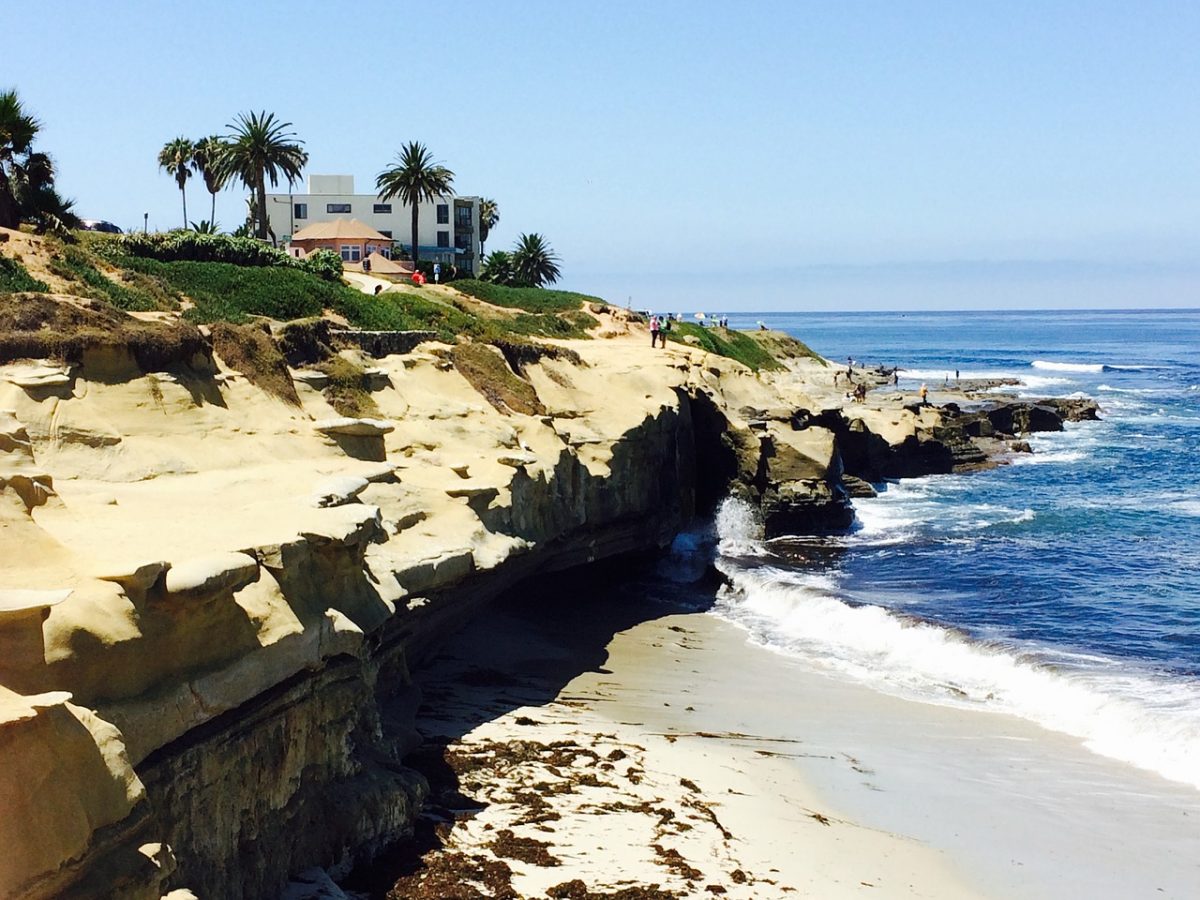 Photo by CyndS on Pixabay

In contrast with the soft sand beaches in the Southern part of San Diego county, the northern coastline is full of rocky cliffs, pebble beaches, and lots of caves. The La Jolla Caves are a unique San Diego attraction in this part of the coastline. They are close to nearby La Jolla Cove and most are only accessible by water.

Each of the La Jolla Caves has its own name. One of the fun things to do in La Jolla is to take a kayak tour through the largest of the seven caves, called Clam Cave. The only one that can be reached by foot is Sunny Jim Cave because back in 1902, a local resident carved a footpath down the cave. There are 145 steps but the view at the end is worth it!

One of the San Diego attractions that is a bit off the beaten path is Cabrillo National Monument. The monument is located at the place where the first European set foot on the American West Coast. It is named after Juan Rodriguez Cabrillo who landed here in 1542. If your San Diego vacation takes place in October, you might be able to catch the reenactment of the historic landing.

The area is worth visiting simply because of the view of San Diego’s harbor and skyline. You can also visit nearby old military barracks and a lighthouse which has stood at the spot since 1855.

Wander Along the Embarcadero 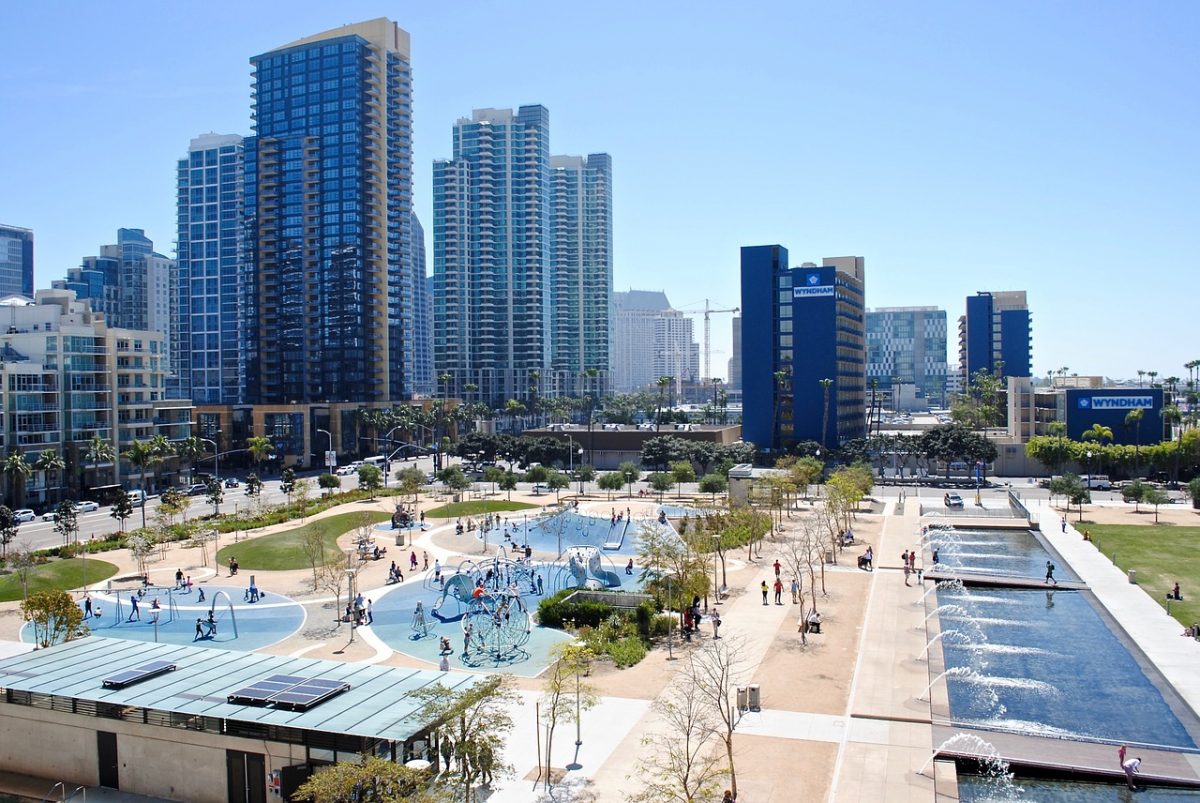 Photo by larsen9236 on Pixabay

Embarcadero means ‘landing place’ in Spanish so it follows that this is also the main harbour of San Diego. Most of the large cruise ships come into port in the San Diego Embarcadero.

The Embarcadero is an area around the San Diego harbour where visitors can see historic boats and museums dedicated to Maritime history. The area also includes a public park with shopping, splash fountains and lawn areas perfect for a picnic. Be sure to check the events at the Embarcadero during your San Diego vacation. The district hosts food and wine festivals, Symphony concerts, as well as the Big Bay Boom 4th of July celebration. One of the most interesting festivals which takes place at the Embarcadero is the U.S. Sand Sculpting Challenge and Art Expo event.

If you’re interested in seeing some spectacular sea life, Sea World should be at the top of your list. There is an abundance of sea life at this huge aquarium and park. In addition to the wildlife, visitors can also enjoy theme park rides and roller coasters.

The main attraction at SeaWorld is of course the killer whales. In 2017, SeaWorld ended their Killer Whale shows in which the animals were trained to perform tricks. There is now an educational show which teaches the audience about these magnificent creatures.

Climb Aboard the USS Midway Museum 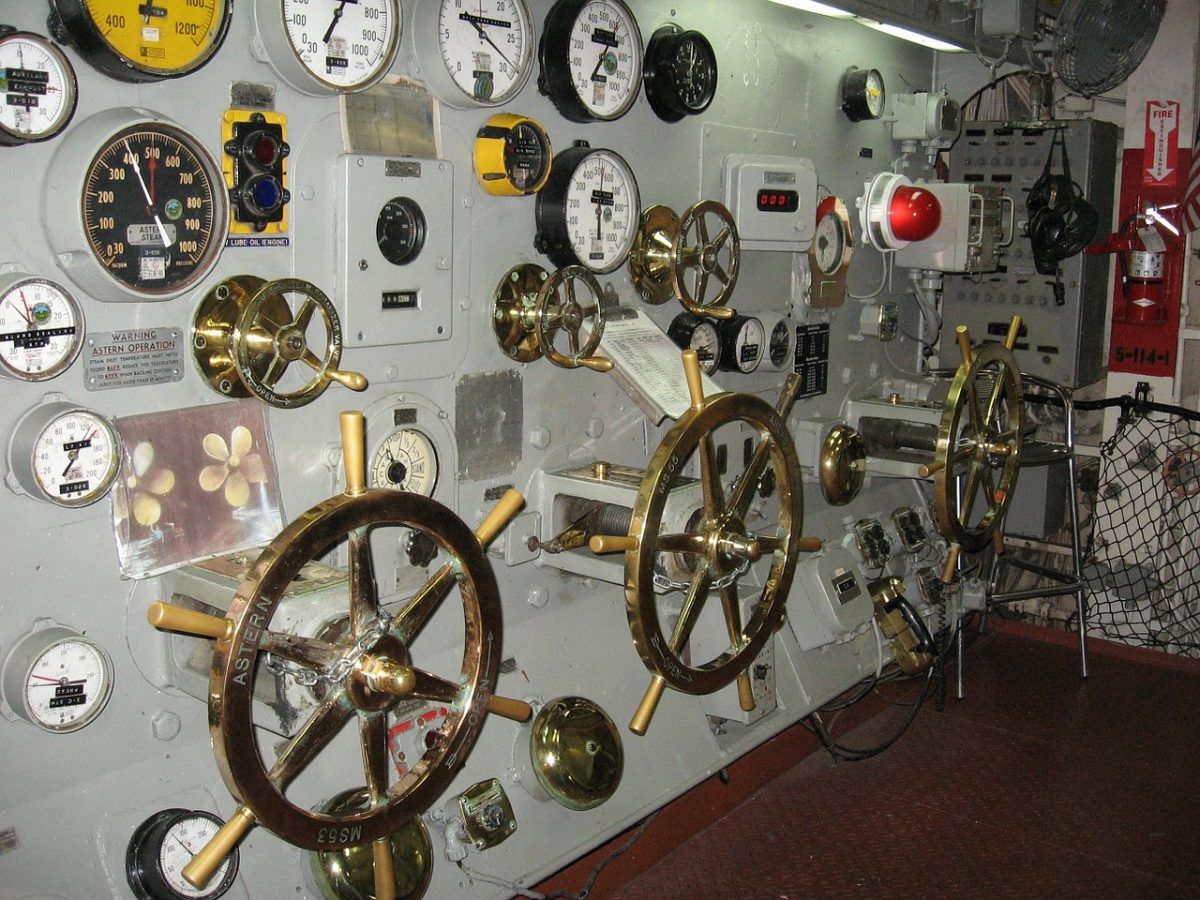 Photo by PublicDomainPictures on Pixabay

The Museum now houses military aircraft and other exhibits. Guests can see what life was like for the military personnel on board an aircraft carrier. You can tour the sleeping quarters, engine rooms, control rooms, and more.

Visitors love the interactive exhibits on the USS Midway Museum like the flight simulator. There is even the opportunity to climb aboard some of the aircraft on display at the museum.

Go Back in Time in San Diego Old Town

Old Town San Diego is the preserved historic center that was the site of the first settlements in San Diego. Spanish missionaries founded Mission San Diego de Alcala and the San Diego Presidio in 1769. The town slowly grew around these early roots. San Diego became a city long before California was part of the United States. This means that the old town still has a lot of Mexican influences in its architecture, shops and restaurants.

Around the 1860s, people started migrating to what is present-day downtown San Diego, and more or less abandoned Old Town. This is good news for history buffs since it means that many of the original buildings are still standing. Old Town became a community frozen in time. Later, other historical buildings were relocated and are preserved as museums in San Diego Old Town.

Nowadays, Old Town is a great place for San Diego tourism because it’s full of restaurants, museums, and specialty shops. The neighborhood is still the central place for celebrating traditional Mexican holidays. If your San Diego vacation happens during Cinco de Mayo or Dia de Los Muertos, you should head to Old Town.

Check the schedule of events in Old Town to see if there are any festivals during your trip. For example, Old Town hosts an annual stagecoach days celebration in July and August. Visitors can take part in activities that show what everyday life was like in San Diego’s past. 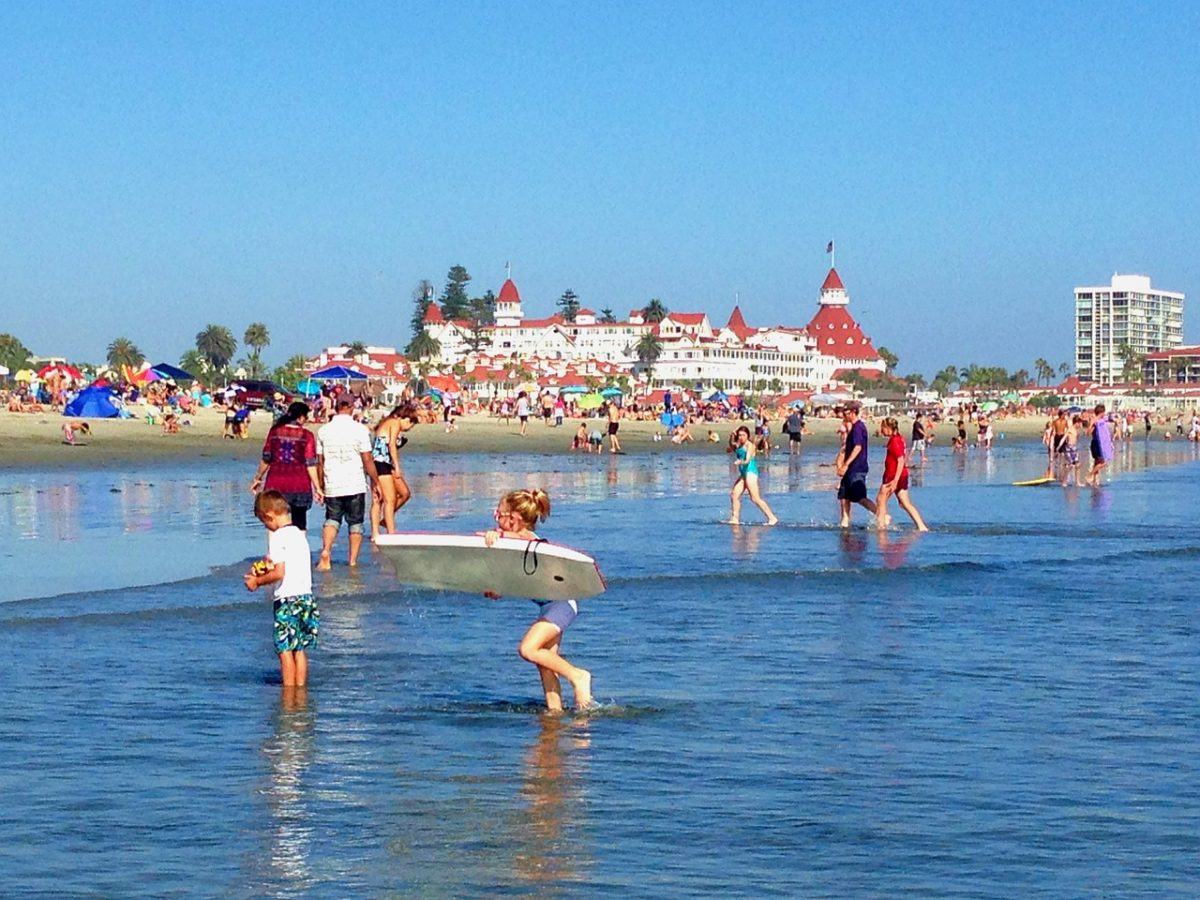 Photo by nathanhill0070 on Pixabay

Coronado Beach is located on Coronado Island near the San Diego Bay. You’ll have to drive across the 200-foot tall Coronado bridge which gives you a great view over San Diego. Another fun way to get to Coronado is by using the Coronado Ferry or water taxi directly from downtown.

Once you’ve reached Coronado, you’ll see that the island is almost like a mini-community within San Diego. It has a bustling main street called Orange Avenue which is full of shops. Don’t miss a visit to the Hotel del Coronado, a chic hotel which provides an amazing backdrop during sunset. Beer fans will enjoy a stop at the Coronado Brewing Company, one of the west coast’s award-winning craft breweries.

It’s easy to see what San Diego is such a great place to visit. Regardless of how you spend your time in this exciting city, you’re sure to have a memorable time!

Top 8 Things To Take Note When Flying With Frontier Airlines
Prev: South Africa Tour... Next: 15 Things To Do I...