If you’re travelling to Osaka in Japan, visiting Osaka Castle should be at the top of your to-do list.

This spectacular oriental-style castle located in the Chuo-ku ward of Osaka is not just a magnificent sight for tourists. Its intricate architecture and tranquil atmosphere are pretty good reasons alone to visit. The castle played a key role in the unification of the nation towards the end of Japan’s Sengoku period.

Each year, thousands of natives and tourists visit this cultural spectacle. They travel to pay respect, learn about the country’s rich history or appreciate the stunning traditional architecture. The castle’s history takes you back almost 450 years. It is no wonder that Osaka Castle – or “Osaka-jo” in Japanese – is one of the most famous landmarks in Japan.

Before visiting Osaka Castle Park, you might want to read up on some key information first!

Osaka Castle Park is spread out over approximately 61,000 square metres (15 acres). It is home to over thirteen structures that hold great cultural significance to the Japanese. You should devote half a day, or at least 2-3 hours if you want to see everything.

The Tenshukaku (castle building itself) has five floors on the outside and eight on the inside. It sits on a 30-metre-tall stone wall foundation. Thanks to its height, the tower provides some of the best views over the surrounding area.

It is also the most iconic (and photogenic) location within the castle grounds. If you’re lucky enough to visit during the spring months, you’ll see the surrounding cherry trees burst into full bloom. If you visit later in the year, you’ll get to see the falling leaves and changing colours of autumn.

A Brief History of Osaka Castle

Osaka Castle was built by the powerful warlord and samurai Toyotomi Hideyoshi in the year 1583. Hideyoshi started the construction during a period of unrest which followed a series of wars in the country. He chose to build the castle on the Uemachi Plateau, the most militarily sound location in the area. The height of the plateau combined with the various rivers that surrounded it made ambush almost impossible.

When it was first built, the Tenshukaku central tower was the largest and best castle in the country. It was also one of the most striking. Unlike the white walls of the castle today, Hideyoshi’s walls were jet black and decked with gold. Although the tower has been reconstructed since, it still holds the unparalleled beauty and air of power that it had back in its early days.

Hideyoshi later managed to unify the country and bring temporary peace to its people, using the castle as a stronghold.

However, this peace did not last long, and the castle was destroyed and rebuilt numerous times over the coming centuries.

The attacking Tokugawa forces burned Osaka Castle to the ground in 1615, and in 1665 a lightning fire struck the gunpowder room destroyed the main tower of the castle. After this incident, the central tower was not rebuilt for 300 years. Following various reconstructions, the castle was once again demolished in 1868, for preventing it from being taken over by anti-shogunate forces.

When Osaka Castle was most recently reconstructed in 1931, most of the funding had come from donations made by the city’s residents. The newest reconstruction suffered some minor blows from the Osaka Fire Bombings during World War II. Despite this, it stayed intact and is the magnificent creation we see today.

The Japanese Government recognised the castle as a historic site in the 1950s. The castle serves as a symbol of the city’s power, resilience and generosity. It is also a reminder of the country’s important history.

What not to miss when visiting Osaka Castle

Make sure to walk by this traditional Shinto shrine, one of many shrines built to honour Toyotomi Hideyoshi. Built-in 1599 under the orders of Emperor Meiji, the structure enshrines Hideyoshi, his brother and Hideyoshi’s son. You can find Hokoku Shrine in front of the Sakurabashi Bridge in the Osaka Castle Park.

Find calm and serenity in the beautiful lush gardens surrounding the lake. Here, you can get great views of famous structures such as the Senganyagura Turret, Enshogura gunpowder room. It is also close to the Osaka Geihinkan reception hall.

Sakura Gate and stone walls are famous for the large rocks that make them up. Some of the main ones include the Dragon Stone and the Tiger Stone on each side of the gate. They are the entrance to the inner castle and are one of the key things to see in Osaka Castle Park.

In the Japanese civil war, the bridge underwent a fire destructing the original wooden make, resulting in the reconstruction of the bridge using stones. 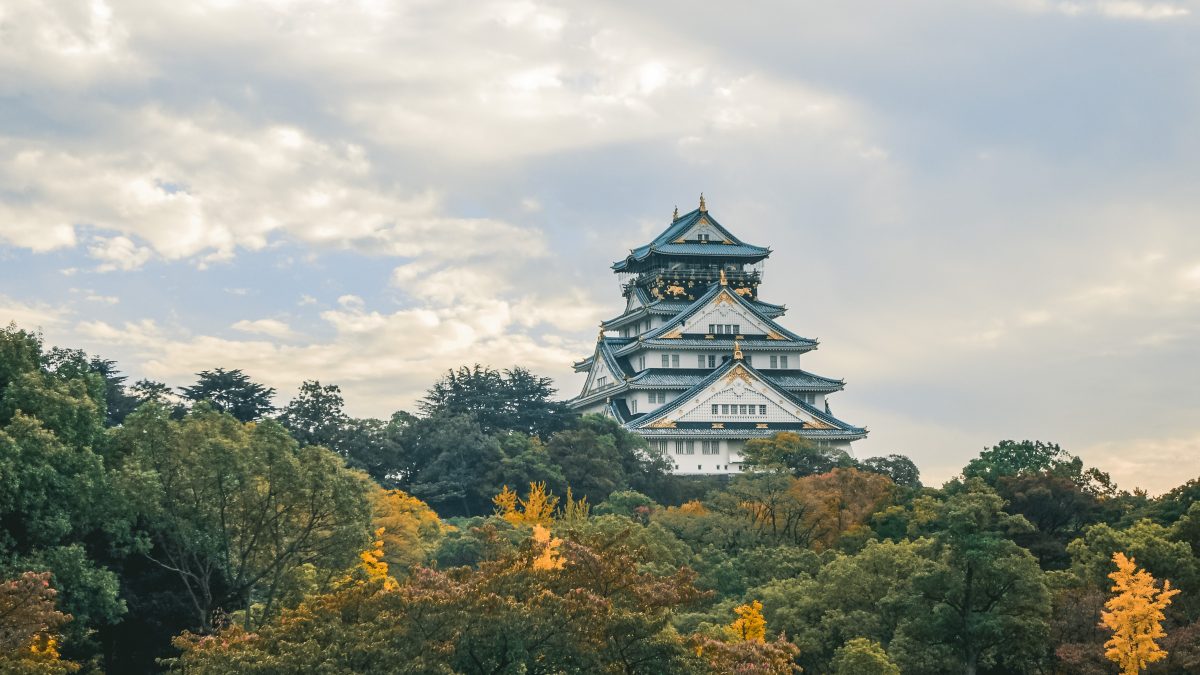 If you’re a first-time visitor to the Kansai region of Japan, Osaka Castle is a must-see destination. Immerse yourself in the rich culture and history of Osaka. Marvel at the breath-taking architecture. Take in the serenity and peacefulness of the castle park and gardens and maybe even snap some stunning photographs.

Tourists can visit Osaka Castle Park every day from 9 am to 5 pm throughout the year. The most popular time to visit is during spring and autumn.

Being in the heart of the city, Osaka Castle is super-accessible. There are five train stations that provide easy access to the castle. The best ones are Osakajokoen Station on the JR Loop Line and Tanimachi Yonchome Station on the Tanimachi and Chuo underground.

Entrance to the castle grounds and gardens are free of charge. Perfect for walking around and admiring the well-kept grounds and greenery.

Have You Visited Osaka Castle?

Have you travelled to Japan and visited Osaka Castle? What did you think of it? Do you have any pictures or stories you’d like to share with us about your experience?

If you’re yet to visit this magnificent castle, do you have any questions?

Drop a comment in the box below, we’d love to hear from you!

Hay On Wye: A Complete Guide to Wales’ Book Town
Prev: Top 10 Things You... Next: Your Complete Gui...