Why Osaka? Japan is one of the world’s most diverse countries. It is wonderfully weird how you can find, within the same country, such advances in modern technology from a people who are so respectful of tradition.

We found that compared to other popular locations in Japan, Osaka felt the most real. A city brimming with soulful people, breathtaking sights to see, and more delicious food than you can hope to imagine. Why Osaka, you ask? These are all the reasons why.

Feel Like A King When You Visit Osaka Castle (Osakajo)

This beautiful structure stands tall amongst blooming cherry blossoms. The castle’s construction began way back in 1583. However, it suffered a number of mishaps over the years and the building you see today came about in 1931.

Sturdier than its predecessors, the current Osaka Castle survived the terrors of war and air raids. If you’re visiting Osaka Castle, you’ll be pleased to know that one final round of renovation back in 1997 has completely modernised the insides of the building. 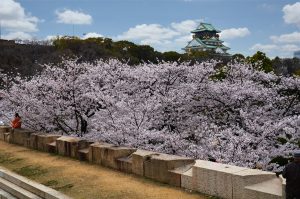 So while on the outside it has retained its traditional charm, you won’t need to climb flights of stairs while exploring the insides!

The cherry blossom trees we spoke of earlier grow in abundance in the castle garden. A total of 600 of them dot the area surrounding Osaka Castle. When in full bloom, it truly is a sight for sore eyes.

Admission to the castle costs just over USD$5 and it is open from 9am to 5pm.

Spa World Osaka is exactly what you’d expect it to be, a collection of various spas, saunas and swimming pools.

The spas and saunas within Spa World Osaka are designed to take you on a trip around the world all while you achieve maximum levels of relaxation. When you get to Spa World Osaka you will see that they have a European and an Asian Zone. 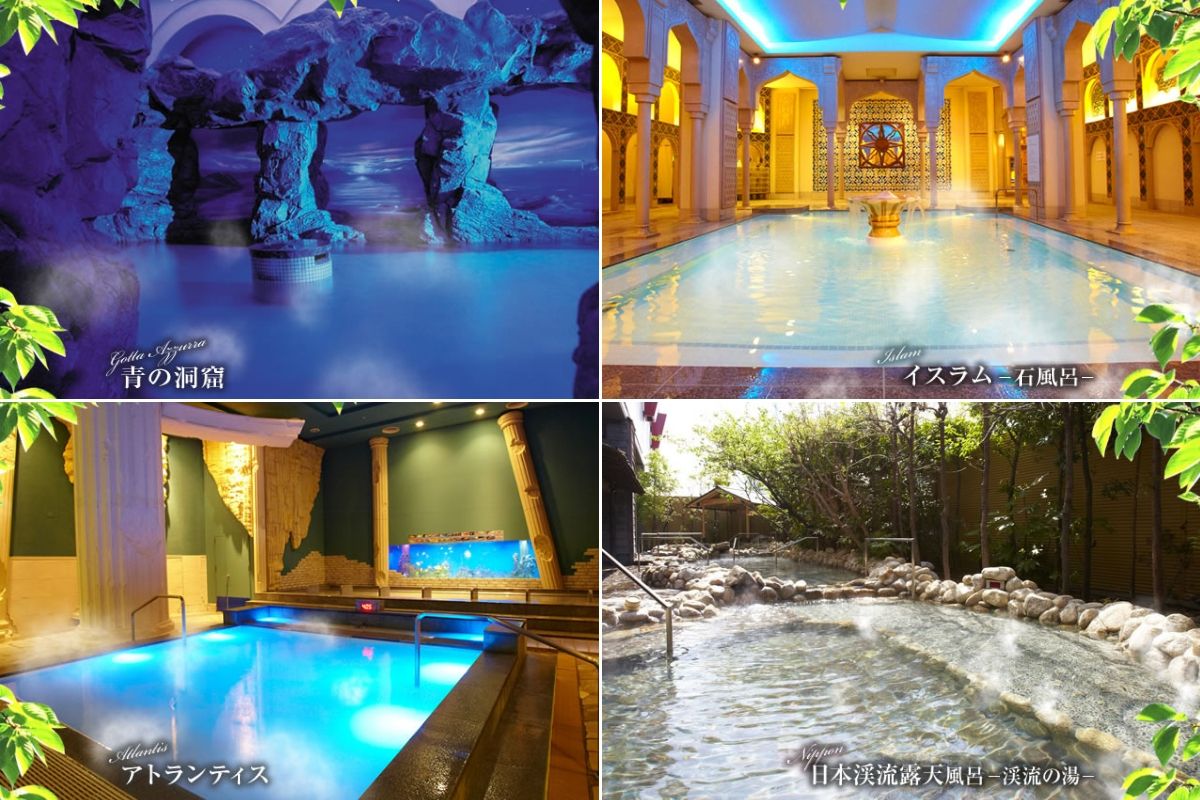 Within these zones, there are jacuzzis, pools, and saunas that look like they’ve been plucked right out of another country and planted before you.

Expect to be spoilt for choice at Spa World Osaka as you get to experience everything from the Mediterranean Sea inspired pool to a Blue Grotto bath.

Do note that Spa World Osaka has strict restrictions when it comes to tattoos. So, unfortunately, if you’re a lover and owner of body art you have to give Spa World Osaka a miss!

Get Your Geek On In Nipponbashi (Anime Street)

If you’re a lover of all things anime, Nipponbashi is the place to be. It is, after all, dubbed Anime Street. While it may not be able to rival Akihabara in Tokyo, it is worth a stop if you’re Japan trip is limited to Osaka. 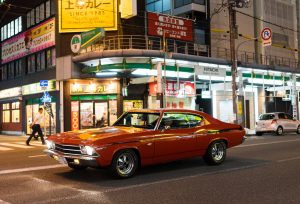 You can spend a good couple of hours walking through Denden Town of Nipponbashi simply browsing. They have quite a collection of Anime-related merchandise, various electronics, and knick-knacks.

Reserve a weekday for your visit to Nipponbashi if you want to steer clear of the crowds. It also makes your hunt for all the merchandise from your favourite anime that much easier.

Tantalise Your Tastebuds At Dotonbori Osaka

You’ve probably already heard that Osaka promises to be heaven for foodies. Discover the textbook foodie’s perfect slice of Osaka at Dotonbori.

There’s something you should know about Osaka and the word kuidaore. The term kuidaore means “to ruin yourself with your extravagance in food”. Osaka is known to be the City of Kuidaore, so you can only imagine the amount of food that awaits, especially within Dotonbori. 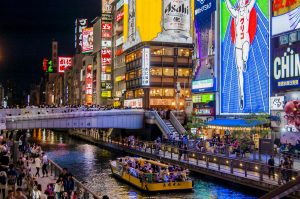 Consider yourself ruined by the extravagance that you will find in Dotonbori’s abundance of restaurants that line either side of the street.

If you’ve always wanted to try fugu (pufferfish/blowfish) but have never trusted anyone to prepare the poisonous luxury properly, pop into Zubora-Ya for some authentic (and safe) fugu.

While you most definitely can purchase tickets at the theme park, we advise you to get them online. This will save you the hassle of having to fight through the crowds, especially if you visit during peak season. 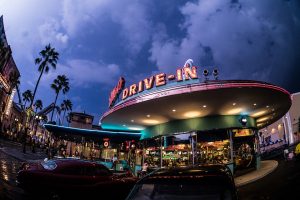 We also suggest that you splurge a little and treat you and your kids to Express Passes. These Express Passes will ensure you cruise past the long queues and straight onto the rides of your choice.

Alternatively, you can opt for the Universal Studios Japan VIP band which grants you access to the park before everyone else. Sesame’s Big Drive and The Flying Dinosaur were crowd favourites with kids and adults respectively.

A one-day pass to Universal Studios Japan purchased online from a third-party seller will cost you roughly USD$70. There are also various packages available depending on how much time you have to spare and the activities you wish to do.

One of our personal favourite things to see and do while in Osaka was the Momofuku Ando Instant Ramen Museum. Most of us spent a period of our lives, probably our college years, relying heavily on the tasty convenience that is instant noodles.

Visiting the Momofuku Ando Instant Ramen Museum is a deliciously perfect way to pay homage to that time of our lives!

At the museum, you absolutely must go to the CUPNOODLES Factory. You get to design your own, personal cup of instant noodles to take home with you. We suggest you make two, one to eat and one to save as a souvenir! 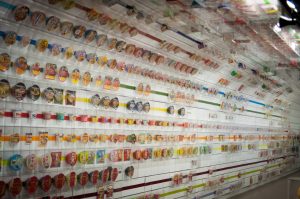 The Momofuku Ando Instant Ramen Museum also allows you to take your involvement in the preparation of instant noodles even farther with their Chicken Ramen Factory. Enjoy getting your hands dirty as you learn how to knead, spread, and steam the noodles from scratch!

The museum is open from 9.30am to 4.30pm, bear in mind that the last admission is an hour before it is due to close. The museum does not operate the day after National Holidays or during the end of the year holidays till New Year’s holidays.

While admission to the Momofuku Ando Instant Ramen Museum is free, certain exhibitions and activities will be chargeable.

Street food galore awaits you at the Kuromon Market. At Kuromon Ichiba vendors will prepare the food which you have selected right on the spot, so you can expect only the freshest of fresh!

Expect to be overwhelmed in the greatest way possible by some of the best sights, smells, and tastes that Japan has to offer. 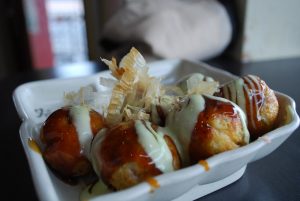 Servings of tuna and salmon sashimi, along with other things like takoyaki, are generous, to say the least. Go as a group and share so you will have space to sample a little bit of everything. Although, we wouldn’t judge you if you chomped through all of Kuromon Market on your own.

Have Mr Billiken Fix Your Luck At Tsutenkaku And Explore Shinsekai

Make sure you pay Mr Billiken a visit when you’re at Tsutenkaku Tower – he is rumoured to be even more effective than Lady Luck herself. Take a nice slow ride up to the top, once you’ve reached the viewing area you will be met with a stunning view of the city.

Mr Billiken, who appears quite content sitting on the 5th floor of Tsutenkaku Tower, has daily queues of people waiting to touch his feet. It is said that anyone who rubs Mr Billiken’s feet will be rewarded with good fortune. 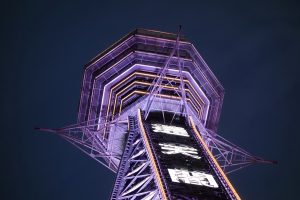 While the queue might take a little while, it could mean a lifetime of luck from Mr Billiken himself!

If you’re looking for late night activities within Osaka, Shinsekai is a great place for you. Shinsekai is actually the area that Tsutenkaku Tower is located in.

You’ll be pleased to know that plenty of restaurants in the area are open around the clock. Meaning that you can get your 2am tonkatsu or Kobe beef cravings satisfied! There is also an outlet of the much raved about Zubora-Ya and its stellar fugu.

Look for the tank that represents the Pacific Ocean, it is nine meters deep and home to the many species that inhabit the Pacific Ocean. Keep your eyes peeled for the aquarium’s main attraction, a whale shark, though we doubt you will need to try too hard to spot him! 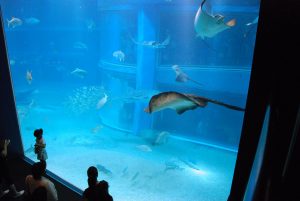 Some of the tanks that you see within the Osaka Aquarium are so large that they take you through several floors. At a certain point, you might even feel like you’re swimming right next to some of the sea creatures.

You can get on a tour that will start off on the 8th floor and take you to the various regions of the Pacific Rim. Admission to the Osaka Aquarium Kaiyukan will cost just over USD$20.

The Umeda Sky Building is certainly a sight to see, standing tall at 173 meters and comprising of 40 floors. Located within the Kita district of Osaka, you can get to the Umeda Sky Building by taking the Japan Rail to either Osaka or Umeda station. It is then a 10-minute walk either northeast or east respectively.

Once you get to the Umeda Sky Building, be sure you hit the Sky Walk that is located on the rooftop – be warned, you probably shouldn’t do this if you have a fear of heights. This is due to the fact that the Sky Walk is open air and it can be quite windy from time to time. 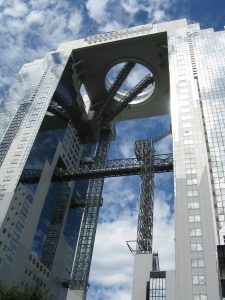 However, if you’re loving the feeling of being on top of the world and aren’t ready to leave just yet, swing by their cocktail lounge. The Sky Lounge Stardust gives you unparalleled views of the city as you sip on your cocktail of choice.

Alternatively, you can also check out the rooftop cafe and restaurant. Admission to the Umeda Sky Building is priced at roughly USD$7.

Catch The Hanshin Tigers At Their Home Field, The Kyocera Dome Osaka

It doesn’t matter if you’re a fan of Japanese baseball or if you’re just looking to revel in some history when in Osaka you should check out the Kyocera Dome. The Kyocera Dome is where the famed Hanshin Tigers play their home games during the season openers in August. 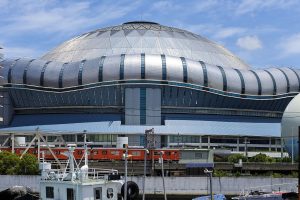 If you’re visiting Osaka and it isn’t baseball season, you can still take a dome tour and get up close and personal with where the magic happens! A tour around the Kyocera Dome Osaka costs a little less than USD$10.

Stop by the Kyocera Dome Museum on your way out and see if you’re lucky enough to score yourself some of the iconic Hanshin Tigers merchandise!

There you have it, our take on the best things to do while you’re in Osaka! We hope your time in food-loving Osaka was filled with some of the best sushi, sashimi, and takoyaki that Japan has to offer! Remember that the easiest way around Osaka, Japan is to make use of its highly efficient public transport system.

The Japan Rail will take you within walking distance of almost everywhere you want to go and it is extremely cost-friendly – unlike taxis that will eat into your budget quite a bit more.

Let us know which spots were your favourites and if you feel we’ve missed anything that you deem list-worthy in the comments below!