The city of Nara, Japan – the name of this city may not be the first to crop up in your head when talking of visit-worthy cities in Japan, but you are in for a surprise on this one.

Located in the Kansai region of Japan, it is the capital city of the Nara prefecture. During the Nara period, it was the capital of Japan, until the capital was moved to Kyoto later. As of today, UNESCO has made it the proud owner of the most number of World Heritage Sites in Japan. The Japanese people have a special place for this city in their hearts due to its cultural history. Nara hosts the oldest and the best known Daibutsu in Japan, which is a large effigy of Lord Buddha. You may regret your travel to this country if you miss out on the many important places in Nara, Japan.

Traditional festivals are held in Nara every year. The Neri-Kuyo Eshiki Festival, celebrated during spring in the Todaiji temple, has been taking place every year for over 1000 years. Another famous festival is the Kemari Festival in which people play traditional games and wear traditional Japanese clothes. The Nara temples are very famous in Japan and you will become a fan once you visit. They occupy a prominent place on any Nara map for everyone.

While Tokyo and Osaka are metropolitan in their look and feel, Nara has still been able to retain its natural and traditional aspect. The architecture in some parts of the city is adapted from traditional merchant houses. And a very surprising fact is that the local deer population is loved and taken care of by both locals and foreigners!

Getting To Nara, Japan 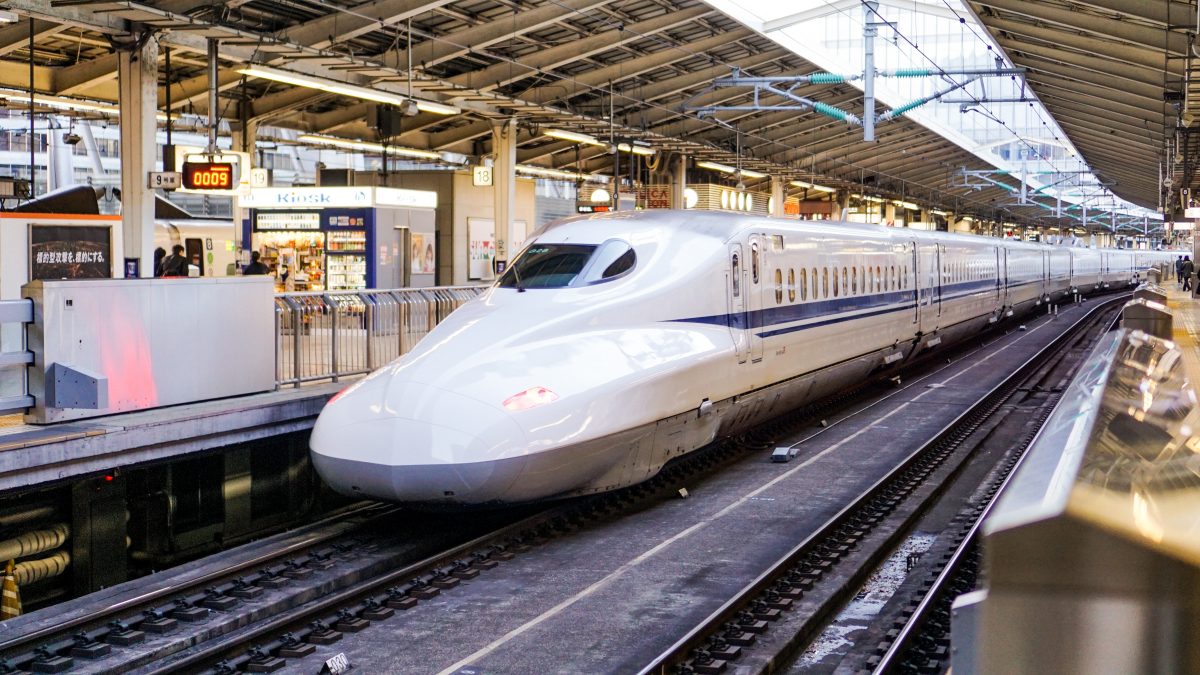 © Photo by Fikri Rasyid on Unsplash

When you are in Tokyo, the most convenient option is definitely taking the Japanese bullet train called ‘Shinkansen’, with the Kintetsu Nara Station and JR Nara Station as the connection points. It takes approximately 2.5 hours to reach Nara via Kyoto from Tokyo.

However, if you are not a fan of trains then flight options are available too. You can travel from Haneda or Narita Airport in Tokyo to Kansai Airport in Osaka, with the travel time being slightly more than an hour. Nara enjoys a special place on the Japan tourism map. 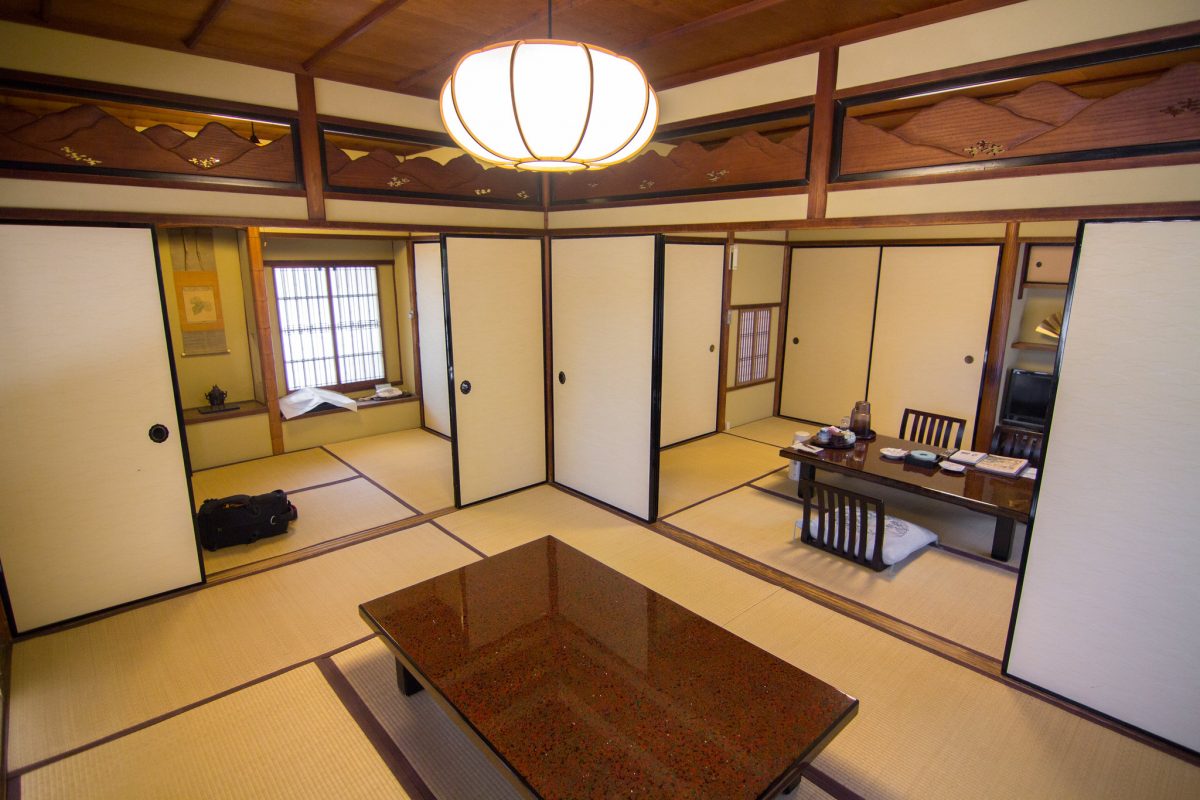 Nara may not a commercialised mainstream city like the other cities of Japan, however finding accommodation isn’t much of a problem. The charming city of Nara has many affordable housing options that you can avail as per your choice and budget.

If you are short on cash then you can definitely visit Guest House Oku, located at Takamaichi-cho 29. It is a small yet clean hotel that has a shared bathroom (like most Japanese hotels).

One of the oldest hotels in Nara, Nara Hotel has rooms that are western in style but housed in a 100-year-old building. This hotel is located on a beautiful hill at Nara Park, overlooking Nara’s historical sites.

The Kasuga Hotel is close to Kintetsu-Nara Station where you can enjoy traditional Japanese style hospitality. The rooms here are both western and Japanese in its style, you can pick according to your preference.

Super Hotel Lohas JR Nara Eki is a budget-friendly hotel that is connected to the JR Nara station via a walkway. So, if you want to save time travelling to your hotel, this is a viable option.

Why Visit Nara When You’re In Japan?

Is there more to the city than just its tradition and effigies? Yes, certainly. There is more to Nara than we can list down. Nara holds the capability to entice you with its natural beauty without having to even try! Before you ask in retort ‘What to do in Nara?’, we are providing a few of the many Nara attractions, adding to your reasons for visiting this city. 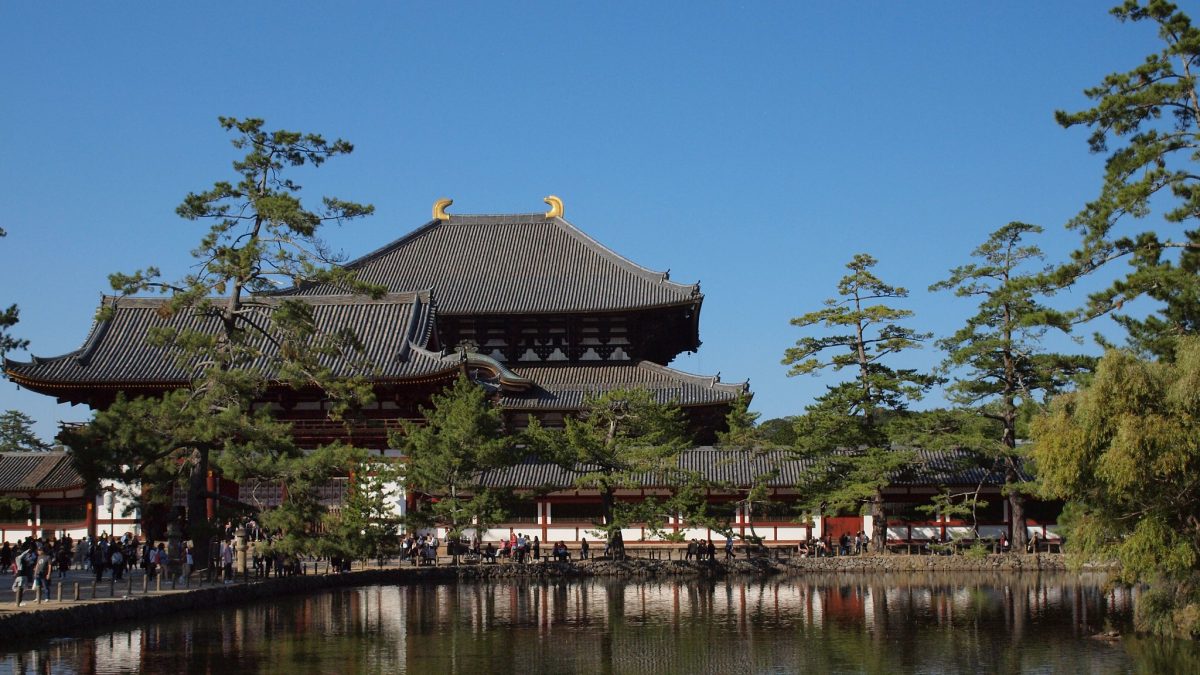 The Todaiji Temple in Nara is a star attraction and easily one of the reasons why people visit Nara when they are in Japan. In it, the world’s largest bronze statue of the Buddha, or the Daibutsu, is placed. Besides its historical significance and fame, the Todaiji Temple offers its devotees or visitors with a spiritual experience of Buddhism. There is a wooden column with a hole in the back of the statue which you will discover as you circle the statue.

There is a popular belief that if you can squeeze through the hole the size of which is exactly the same as one of the Great Buddha’s nostrils of the statue, then you are assured of enlightened. In the Nigatsu-do hall, you will encounter a beautiful view of Nara.

Mingle With Nature’s Bounty At The Deer Park 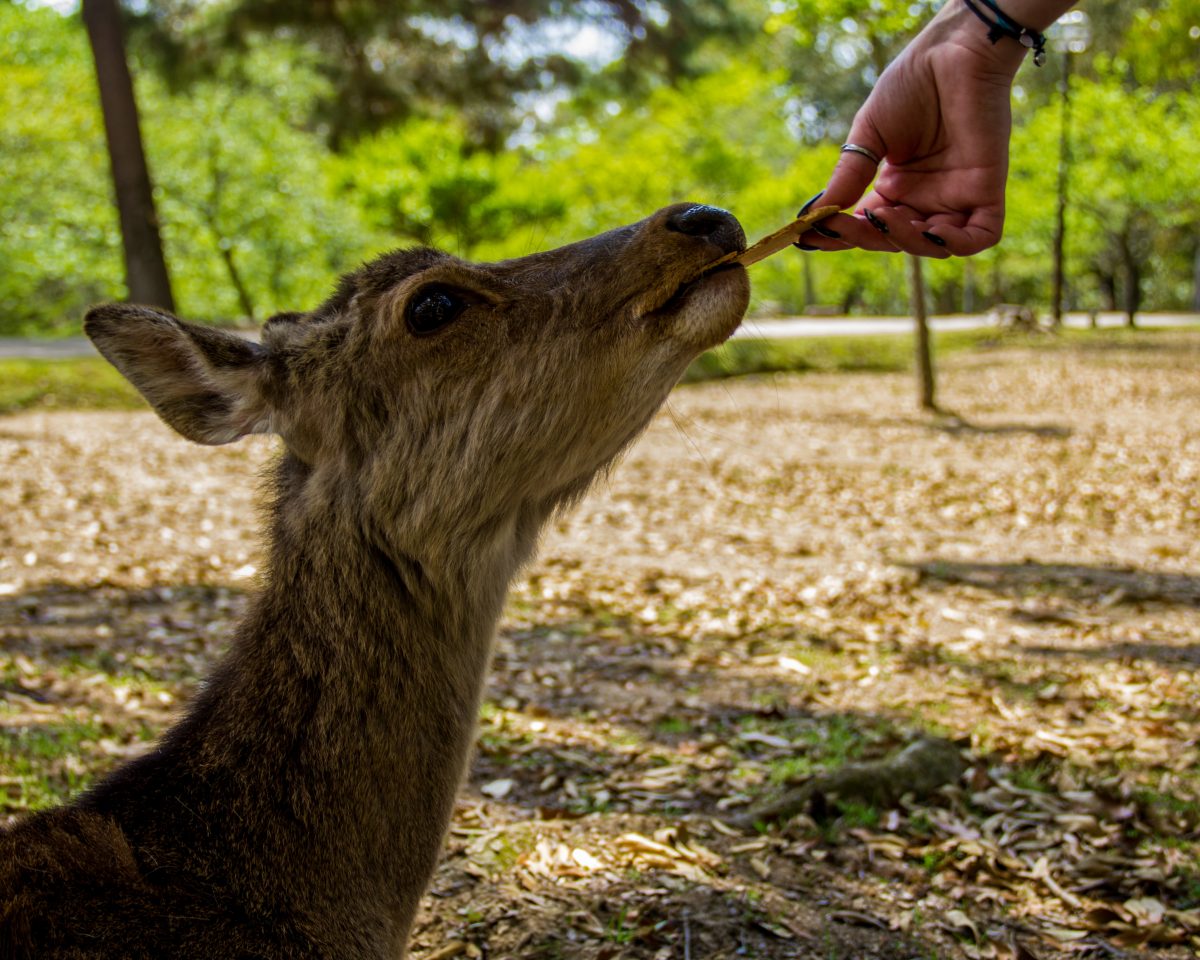 © Photo by Alessio Ferretti on Unsplash

The Deer Park, or Nara Park, is a top place to visit when you’re in Nara, Japan. Once you are there, you will encounter thousands of tame deers roaming freely in the park. Sounds unusual, right? But it’s true! Tourists and locals feed the deer with special ‘deer crackers’ that can be purchased from vendors at the park. The deer roam around the temples, shops and the streets freely and even bow when given food to. They sometimes head-bump visitors asking to be fed; who knew deers make such good pals?

According to a legend, a mythical deity rode into the town on a white deer and proclaimed himself as the protector of Nara. In fact, up until the end of the Second World War, deers were considered sacred after which they became a national treasure. The Nara Park entrance fees is nominal and you will certainly enjoy yourself there; just make sure you carry the map of Nara Park with you to save some time.

Light Up The Lanterns At The Kasuga Taisha 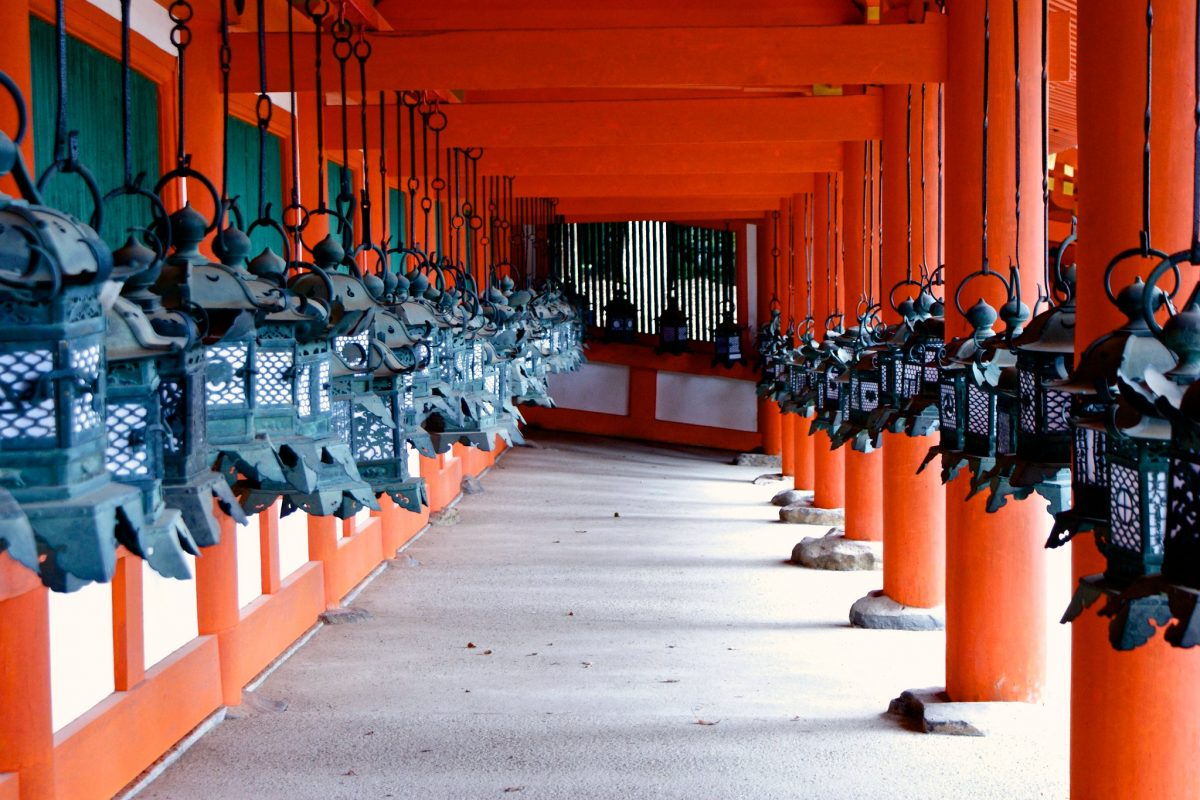 Built in the 768 CE, the Kasuga Taisha or the Kasuga Grand Shrine is a Shinto shrine (enshrines one or more kami). The Shinto shrines in Japan are not places of worship. Instead, they are structures where sacred objects affiliated to deities are kept safely.

The Kasuga Taisha was rebuilt every twenty years until the late 19th Century to protect the then newly christened capital, Nara. It is situated at the foot of Mikasa-Yama and is a UNESCO World Heritage Site. Every February and August, hundreds of lanterns lined on the corridors are lit up during the Mantoro-lantern Festival. 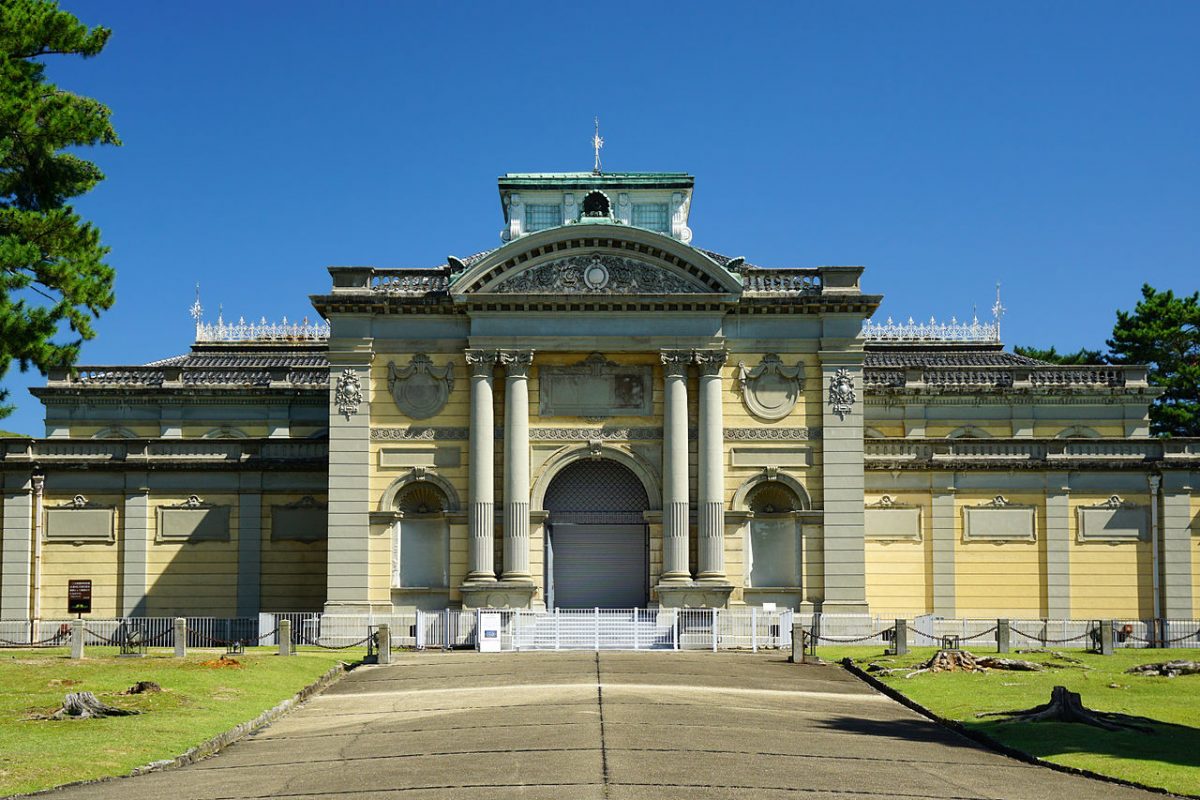 © Photo by 663highland on Wiki Commons

The Nara National Museum is located in Nara Park, which hosts a variety of Japanese Buddhist art. Built in 1894, it is not the only museum in the city but definitely the most prominent one. Also called Nara Prefectural Art Museum, it carries national treasures and each of them provides English explanations for your convenience. Every autumn, the properties at the Shosoin repository are exhibited. 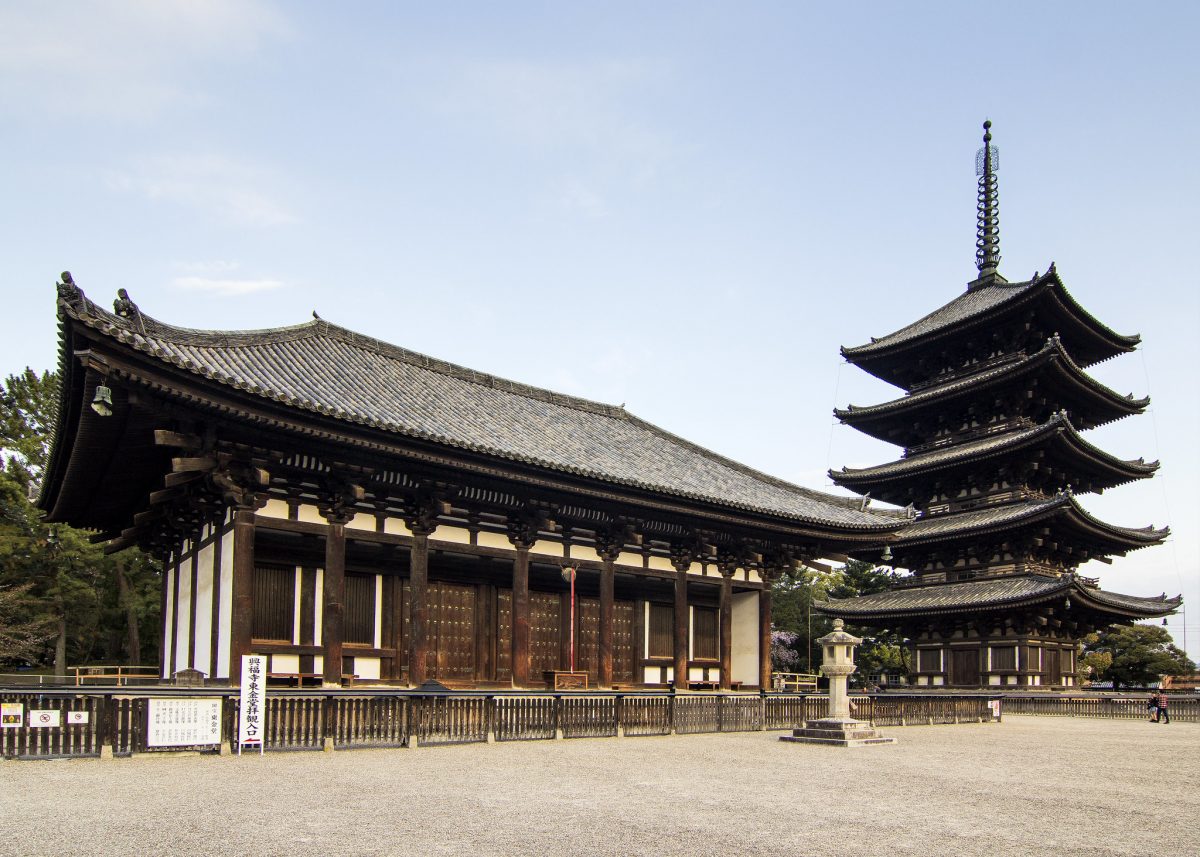 The Kofukuji Temple used to be a family temple of the Fujiwara clan during the Nara Period. It is one of the most famous buildings in Japan due to its historical importance. Originally built in 669 AD in Kyoto, it was shifted to Nara in 710 AD. Initially, it has a beautiful complex with 175 buildings, but after undergoing fires and medieval civil warfare, one of the three main halls, the Nandaimon, Chumon, and the corridor are missing. 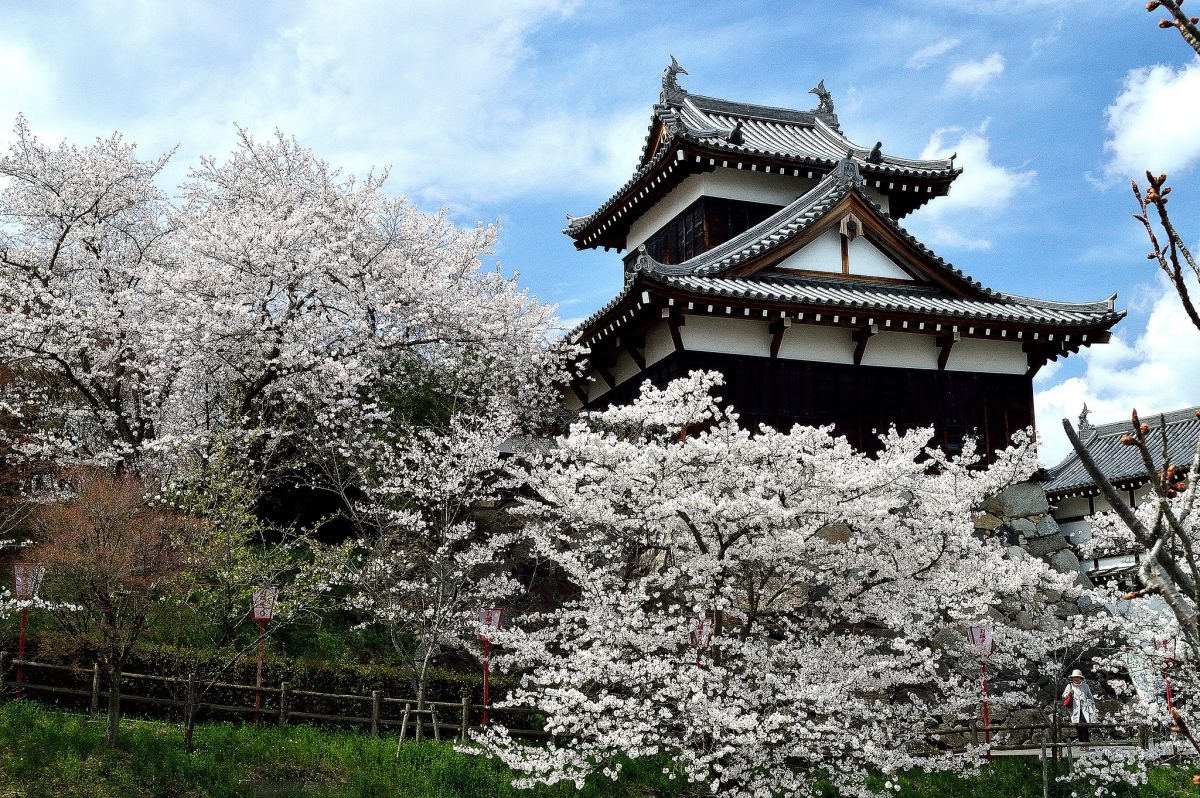 Situated in the city of Yamatokoriyama, this was a Japanese Castle, on the grounds of which the Yanagisawa Shrine stands. The high walls of the castle were built with stones and jizo figures from local temples. According to popular belief, in order to please the spirits that might have been offended by this, every spring an annual festival is held in April known as the Yamato Koriyama Castle Festival and the entry is free. The view of the castle grounds is breathtakingly beautiful as it is full of sakura or cherry blossom trees. 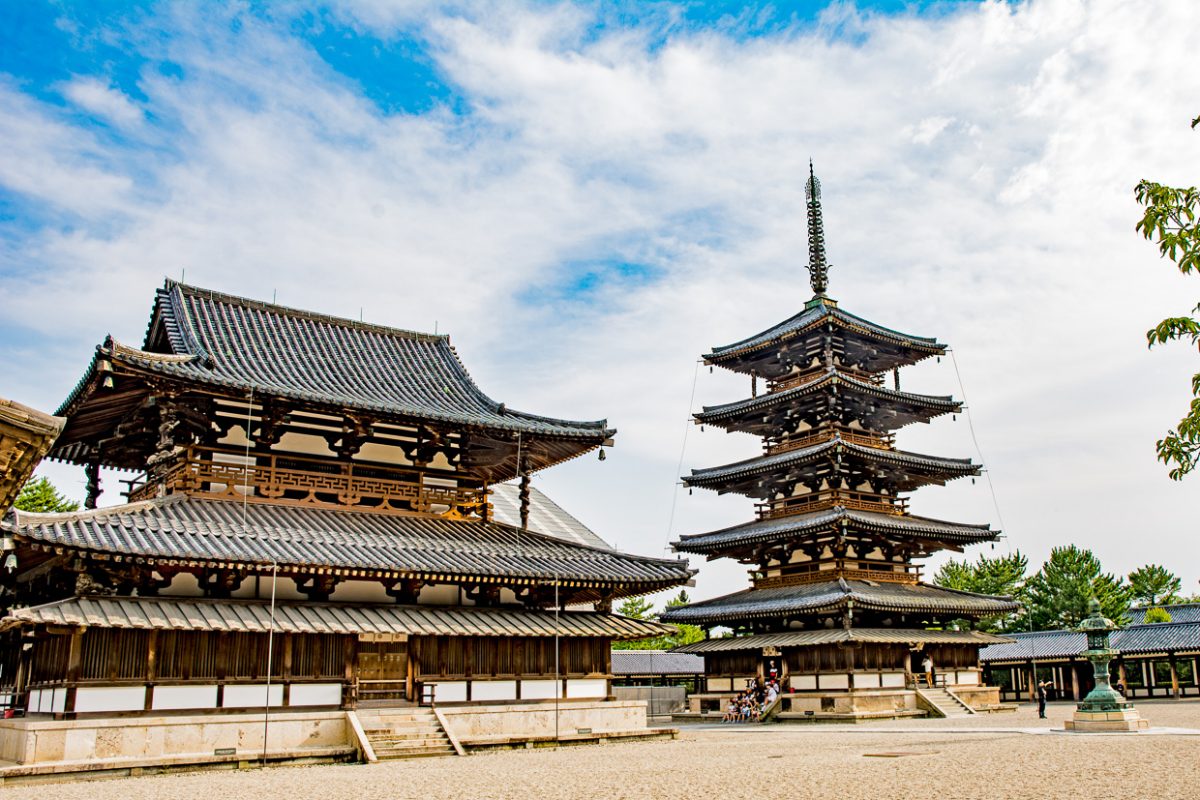 Prince Shotuku, considered a patron saint of Japanese Buddhism by many, built this temple in 607 AD. The temple’s pagoda is the oldest wooden building in the world, and was declared a UNESCO World Heritage Site in 1993. Being a treasury of fine Buddhist architecture, it holds more than 2,300 pieces of cultural and historical items.

Reconnect With Exotic Greenery At The Kasuga Taisha Garden 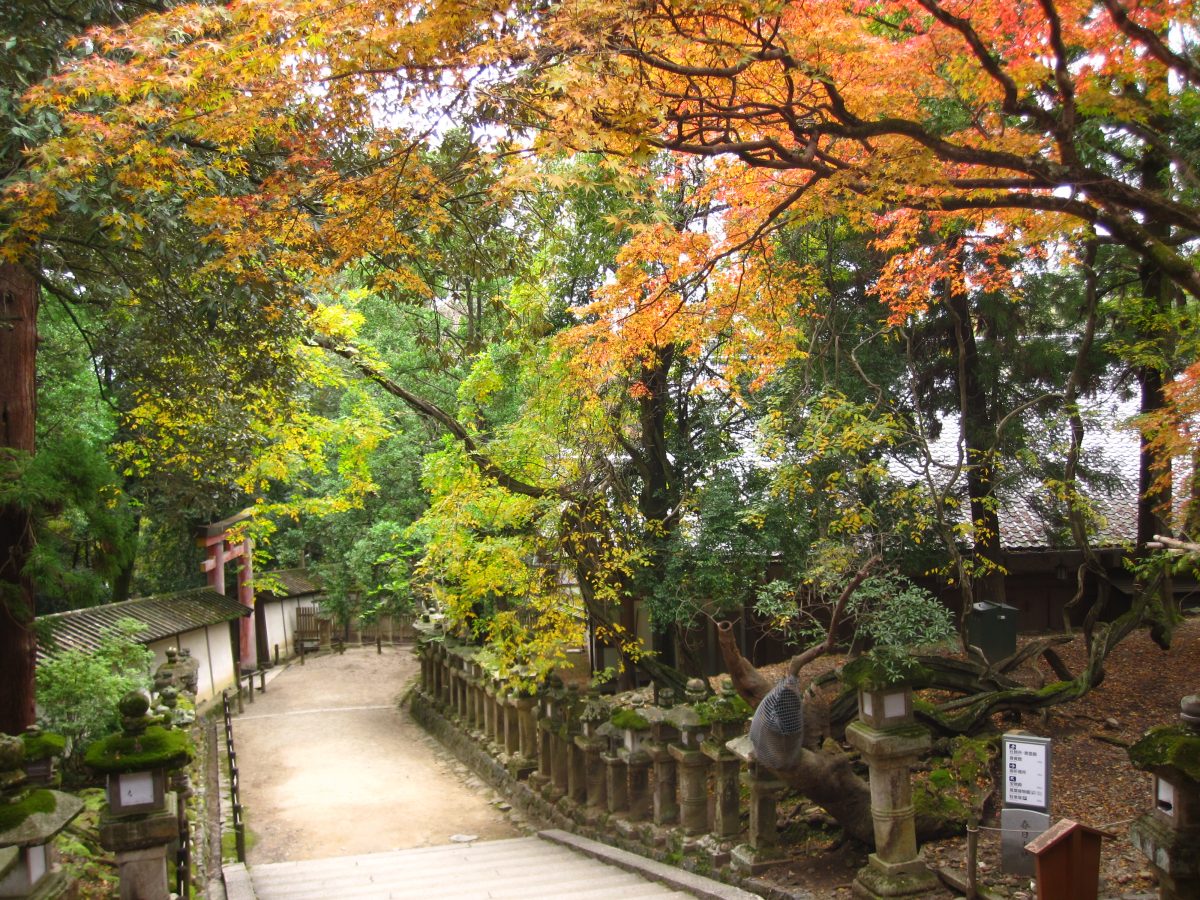 The Manyo Botanical Garden, also known as the Kasuga Taisha Garden, is located next to the Kasuga Shrine in Nara. It gives you the rare experience of reconnecting with nature and what she has to offer.

In the garden, you can find a collection of plants and trees of over 300 species. In the month of May, the sight of the 200 wisterias swaying in the wind is a picturesque moment. The wisteria is a symbol of the Fujiwara clan which is said to have enshrined their God at the foot of the Kasuga Hill. Twice a year, the garden holds special events where ancient court music and dance are performed.

Reunite With Your Spirituality At Toshodaiji Temple 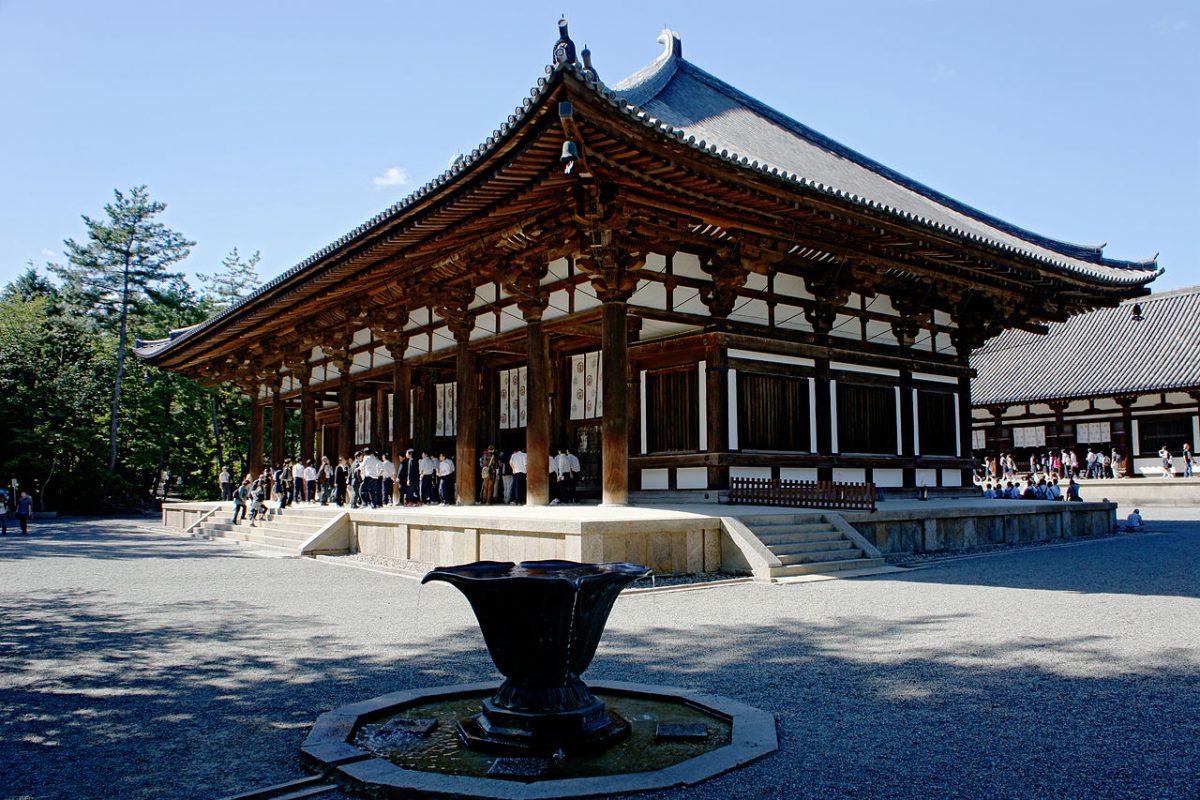 © Photo by 663highland on Wiki Commons

Jianzen, an influential Chinese priest, established this temple in 759 AD as a part of the reformation process of Japan towards Buddhism. The Kondo or the Classic Golden Hall houses a 5-metre tall thousand-armed statue of Kannon, the Buddhist goddess of Mercy. The structures here date back to the 8th century and the figures prominently among the various Japan tourism attractions. 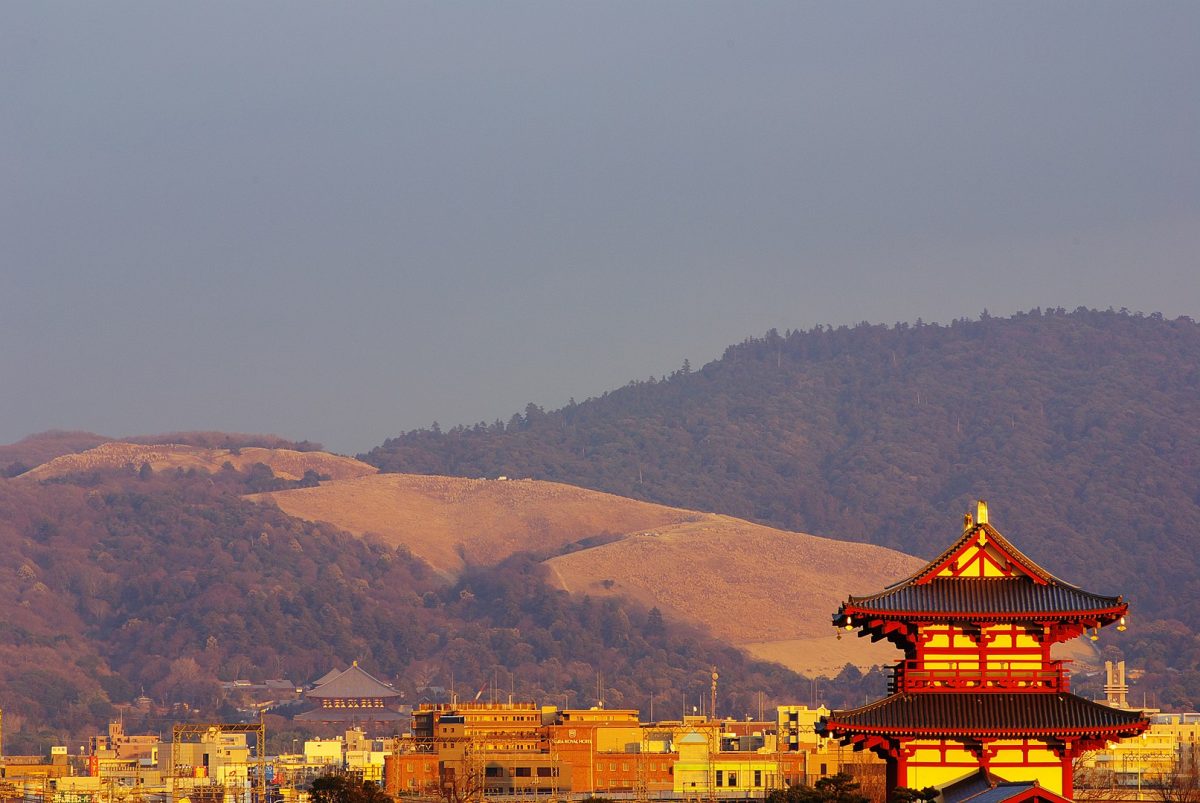 © Photo by 名古屋太郎 on Wiki Commons

If you love hiking and you’re visiting Nara, you must visit Mount Wakakusa, a 1,122-ft high mountain with paths starting behind the Todaiji Temple. It is one of the main features on any Japan tourism map.

Mount Wakakusa is comparatively easy to climb with views as far as the Heijo Palace Remains. To enter one of the two main trails, you will be required to pay a fee to reach the main observatory in 15 minutes. It takes approximately 20 minutes to reach the summit from there.

Also known as Mount Mikasa, which translates to “young grass”, every year there is a festival called Yamayaki, or mountain burning, held on the fourth Saturday of January where the old and dead grass of Mount Wakakusa is burned. Initially, this event started as the result of a dispute over the boundary between two temples which set the entire mountain on fire. Today, the festival begins with fireworks.

With the rapid shift towards technology and renovation in other cities of Japan such as Tokyo and Osaka, the ‘City of Deer’, Nara, still retains the culture of Japan and plays the role of the protector and preserver of the cultural heritage of the country quietly. Their love for animals is visible in their very treatment of the deers. They do not believe in caging them, instead they offer food and love to them.

Nara presents the model of an ancient Japanese district with a modern outlook that is clinging on to modernity and antiquity at the same time with a fine blend of both. Once you visit Nara, you will get the feeling of traditional Japan and the modern city of Japan altogether. It is certainly becoming one of the favourite places in Japan for every visitor from abroad.

Here’s other amazing things you can do in Tokyo and Osaka!

The Best of Ulsan Korea: A Traveler’s Guide
Prev: 5 Best Kids Sleep... Next: Why Do You Need B...