Food is an important part of any culture and is a great way to learn about a country and its traditions. Like many countries, Denmark has its unique cuisines carefully seasoned with local seasonings. Danish food originates from the peasant population local produce. It has been enhanced by cooking techniques from the 19th century and after the Industrial Revolution.

Denmark has many types of traditional dishes for three regular meals a day. For example, they have flæskesteg (roast pork) for meat lovers, Danish blue cheese for vegetarians and the delectable smørrebrød (Danish sandwich) for everyone. Over the past decades, however, traditional danish food has been reinvented as a New Nordic Cuisine. These Danish foods are here to motivate you to experience Danish traditional food and culture when you visit the Danes. 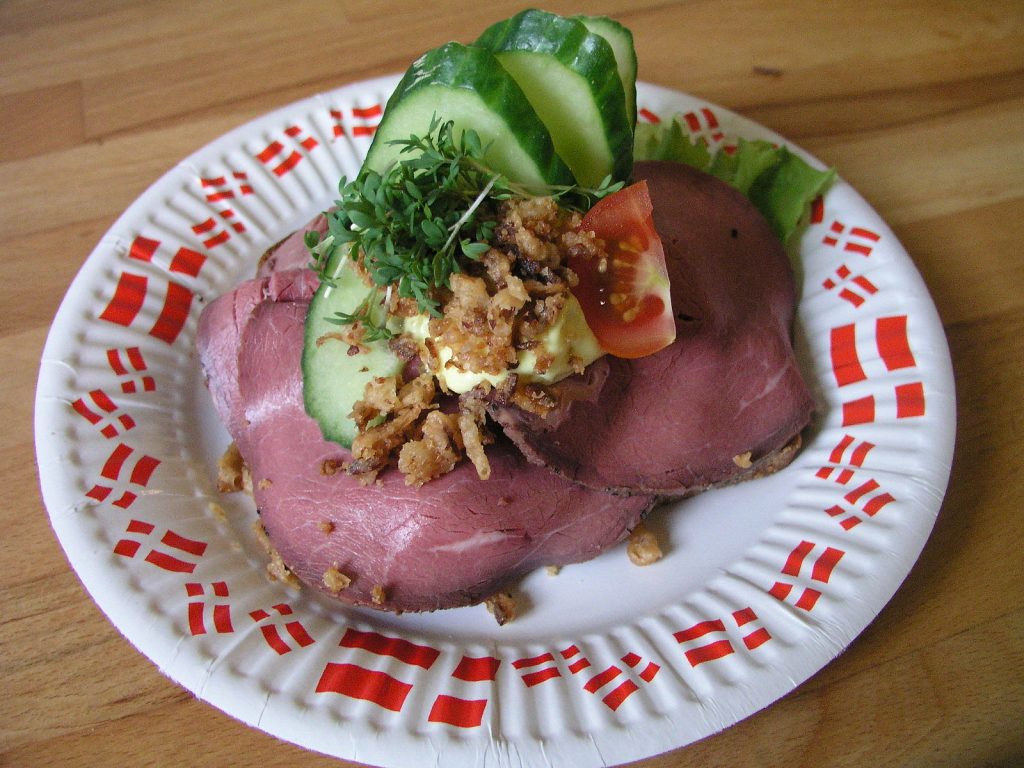 A favored traditional Scandinavian dish native to Denmark is a simple open-faced sandwich. Smørrebrød consists of a Danish buttered rye bread topped with delicious cold cuts, meat or fish, cheese or spread, and garnishes. Fast and easy to assemble, the sandwiches are good for a quick and tasty meal. Smørrebrød means butter bread. However, its ingredients aren’t limited to butter and rye.

Of the many fishes used on Smørrebrød, the traditionally favored one is the classic pickled herring on sourdough bread. Placed with a slice of cheese or spread, and carefully chosen toppings, it’s one of the most fulfilling meals in Denmark. Also, the favored Smørrebrød choice for meat lovers is the Danish classic roast beef topped with pickles, onions, and horseradish. The tender beef and crunch of pickles and onion blend nicely in both texture and taste. This scrumptious Danish food is unique. Unlike covered sandwiches where hands are used, this Danish cuisine is eaten delicately with a knife and fork. This then allows the toppings and garnishes of the open-faced sandwich to stay whole with each other.

Tip: To make the perfect Smørrebrød, the toppings should blend harmoniously.  They shouldn’t be fighting to overpower each other in taste and texture. 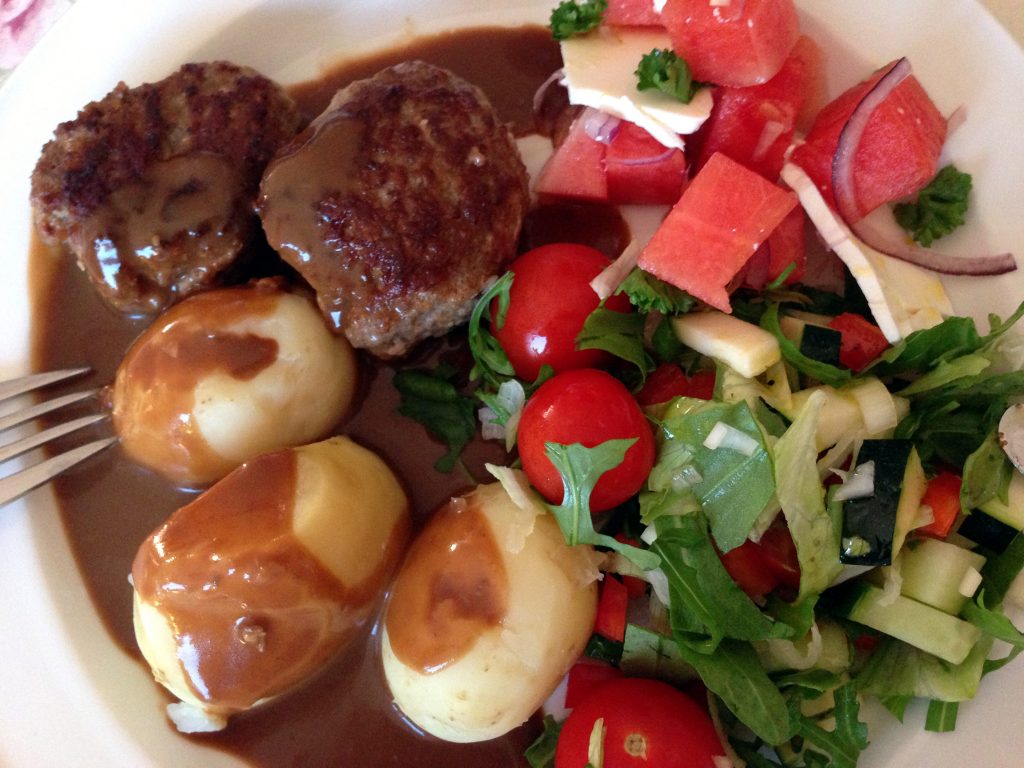 Many countries have a unique type of meatball. Some made from fish, others from beef. Danish food, however, has meatballs made from pork. But on occasion, their meatballs are made from a mix of beef and pork. Easy to make, Frikadeller consist of the basic seasoning of onions, nutmeg, garlic, sage, and some salt and pepper. Unlike most meatballs, Danish meatballs are pan-fried and flat. This Danish traditional cuisine is usually eaten with sides like boiled potatoes, red cabbage, or pickles. Depending on the time of day, the amount of food varies. For example, the portions of lunch would be smaller than the portions of dinner. On top of side dishes, Frikadeller is usually covered with a parsley sauce. This sauce then adds to the scrumptious flavor of the meat.

Not all Frikadeller are made of pork. They can also be made of fish too. Unlike all other meatballs, this particular Danish cuisine is popularly eaten cold. Shaped and cooked the same way as pork Frikadeller, fish Frikadeller is traditionally served with remoulade; a Danish type of sauce or dressing. A favorite to many, this is a must-try traditional dish when visiting Denmark. 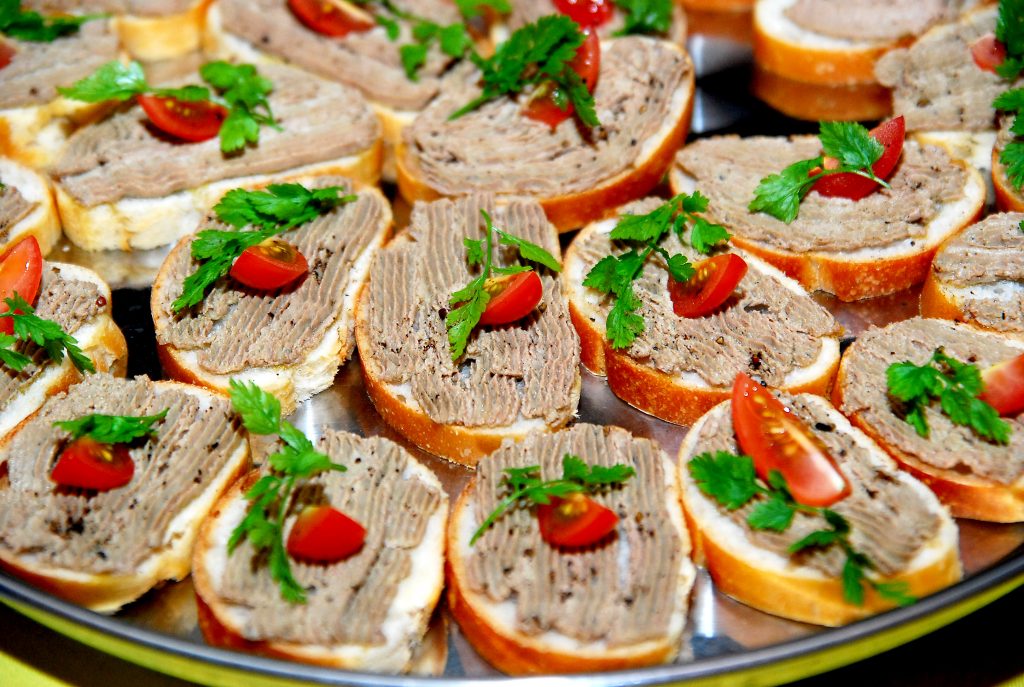 A traditional Danish favorite food is liver pate. It is made out of pork, lard, and onions. Leverpostej was introduced in 1847 by the Frenchman François Louis Beauvais when he visited Copenhagen. It then became a luxury dish that was expensive to most people. However, it later became a traditional dish of Denmark and is today common and extremely affordable. Most people would eat it on an open-faced sandwich with garnish. The liver pate itself blends in well with the Danish rye bread so much that garnish may not be needed. However, to make a mind-blowing meal, some toppings like sliced cucumber, mushrooms and bacon goes well with the liver.

The best way to eat leverpostej is when served hot or warm. However, it should be heated separately from the bread. This is because Danish bread tends to dry up quickly under heat. Though many have bought Danish liver pate, others have also made it at home. It is traditionally simple to make with the proper ingredients of pork liver and pork fat. Mixed with them should be ingredients like onions, eggs, milk, and flour. Both making and eating leverpostej is a tasty experience to die for, and most definitely worth a try.

Fun fact: In recent years, according to two surveys, the Danes have voted leverpostej as their favorite sandwich topping. 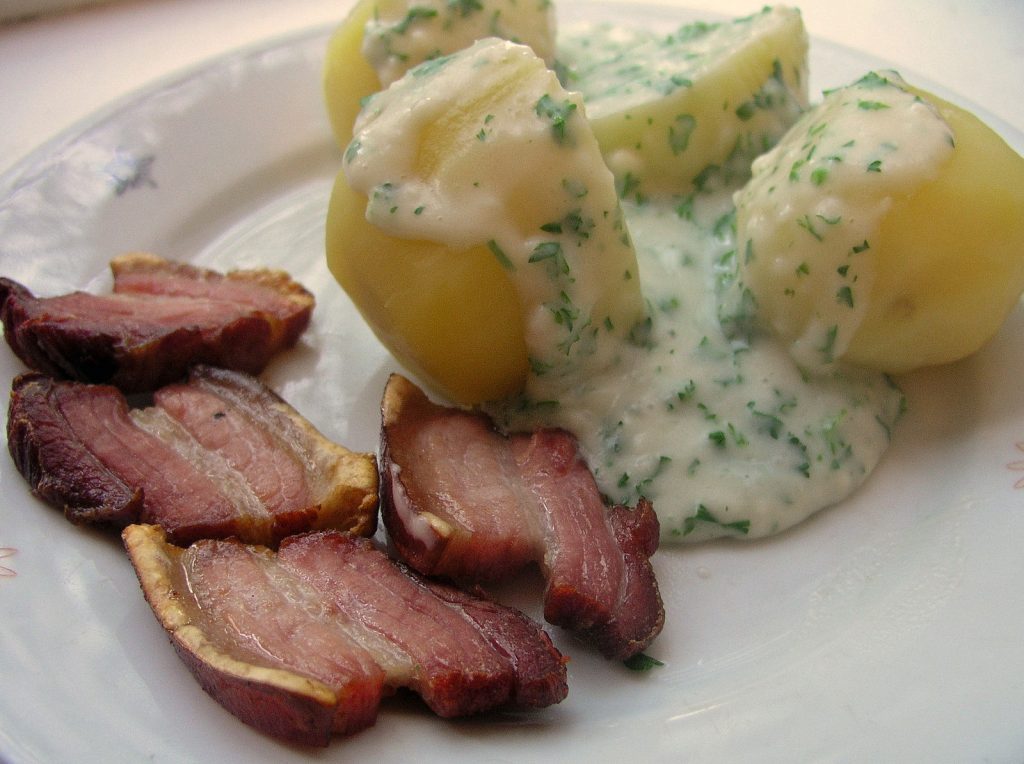 On top of having delicious traditional cuisines, Denmark has an amazing national dish. In 2014,  the national dish competition was the culmination of Food and Agriculture Minister Dan Jørgensen ‘food revolution’. It was an effort to get Danes to focus on eating healthier and more local foods. Of twenty-four initial candidate dishes, stegt flæsk med persillesovs og kartofler was chosen as the favored dish among the Danish. It consists of thick fried slices of pork served with boiled potatoes and parsley sauce.

If it is a Danish favorite, it is something that must be tried when visiting Denmark. It looks good and tastes even better. When visiting Denmark, tourists can find this specialty in various restaurants. Also, some restaurants do serve their national cuisine in their buffets. Having pork as its national dish, Denmark is one location where bacon lovers will get their fill and more. 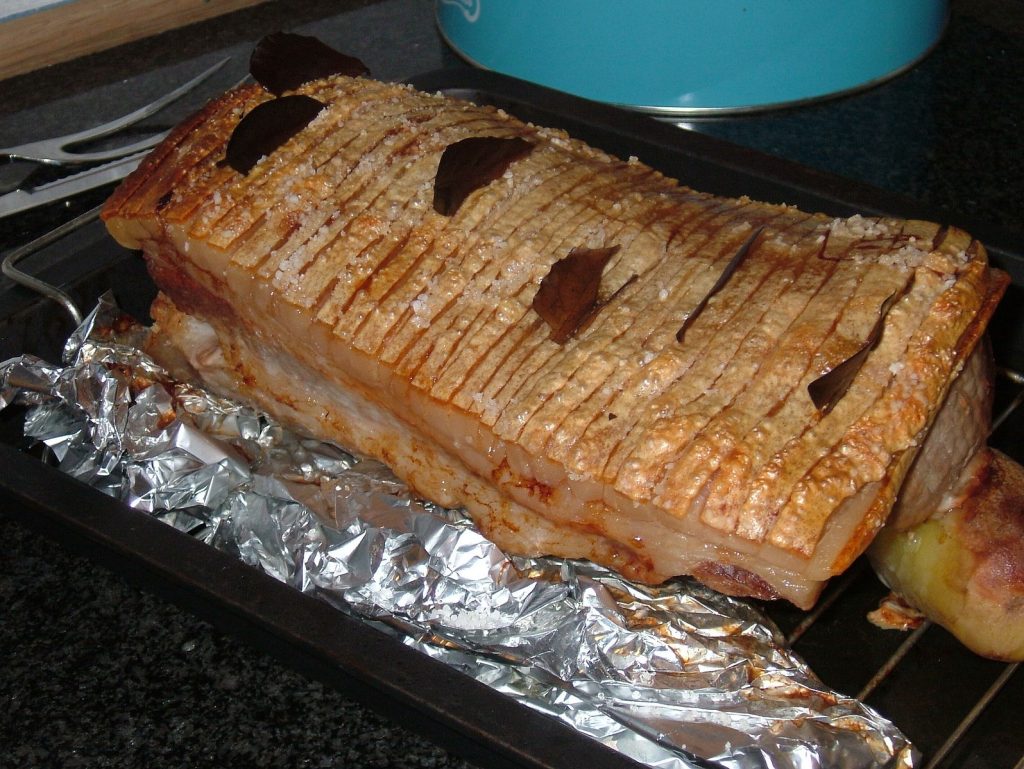 A traditional dish of Danish food always appears during Christmas and no dinner table should be without it. Because Christmas is one of the largest events and holidays in Denmark, it is one of the principal national dishes of Denmark. Flæskesteg is the Danish version of the world’s widely known roast pork. The version of pork roast in other countries is normally prepared without the rind; the tough outer skin of the pork. However, in the Danish version, the rind is always left on and then cooked into a salted crisp. This crisp is called “crackling”.

This thinly sliced, tender roasted pork is usually served with boiled potatoes, red cabbage, and sauce made from meat drippings.  This all put together makes it a delicious full-blown meal. Also, not only can it be eaten alone but it can be eaten with sandwiches as well. 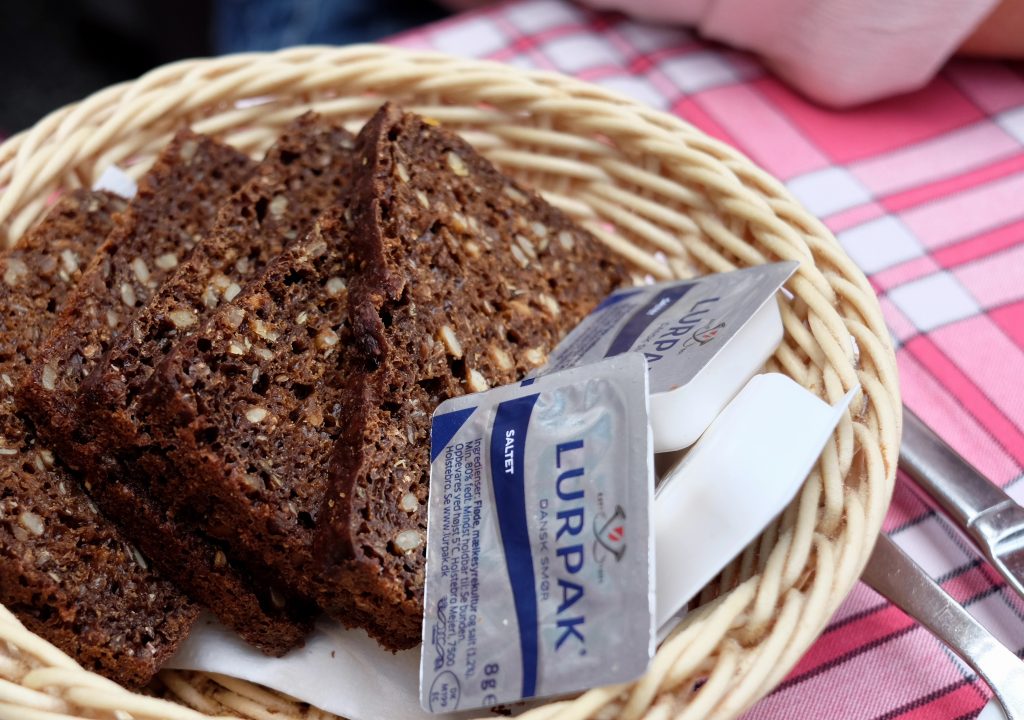 Danish food is not fatty foods. It includes healthy items such as rye bread also known as Rugbrød. Its ingredients typically include rye flour, chopped rye kernels and different types of seeds. Other seeds that are commonly used are sunflower seeds, linseeds or pumpkin seeds. A Danish traditional staple, it’s low in fat, contains no oil, is high in fiber.  Suffice to say, it is generally a healthier alternative to white bread. With a unique texture and loaded with flavor, it’s traditionally served with butter or as the base of a smørrebrød; a Danish open-faced sandwich.

Freshly baked, Rugbrød lasts well over a week, though it will eventually become dry. However, when it does become dry,  it can then be sliced thinly and used as a cracker. A typical look and size of the loaf is usually a long brown extruded rectangle, no more than 12 cm high. But, it may not be the case as it does depend on the bread pan in which it is baked. Simply delicious, it is hard to avoid when in Denmark. 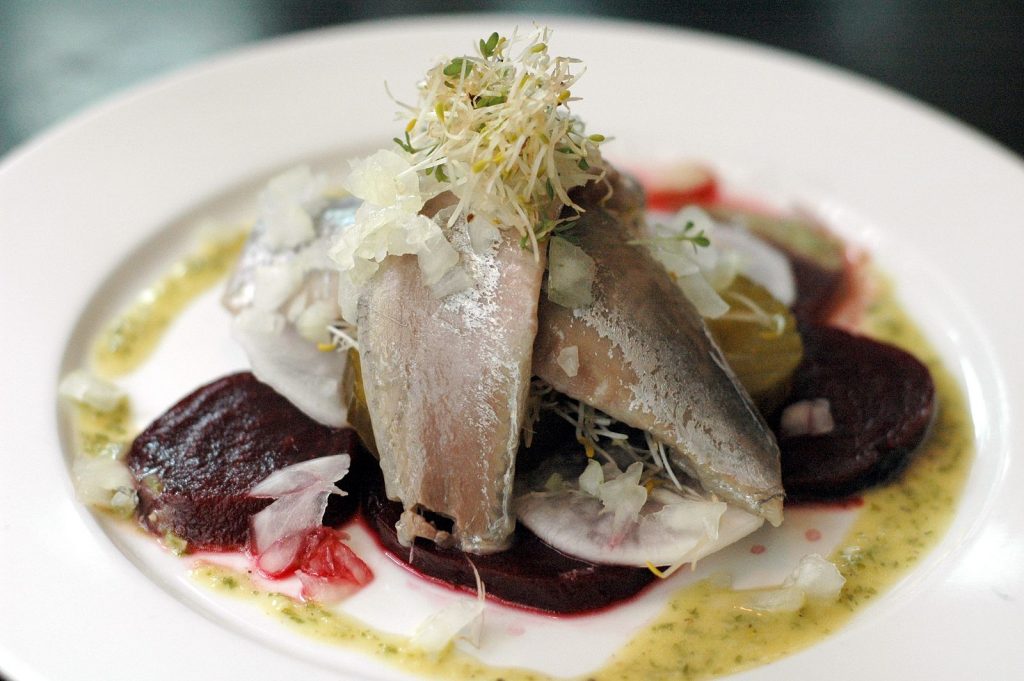 With their history as seafaring Vikings, Danish food has to include their popular cuisines of herring. Known as the “silver of the sea”, it offered a never-ending supply of food that later helped establish Scandinavian cities. A thousand years ago, Vikings preserved fish pre-refrigeration with a combination of salt and vinegar. Over time, it then became a cultural tradition that many are grateful for because, after all this time,  it still tastes awesome.

Danish food also includes multiple ways in which to cook herring. This includes marinated, dressed in mustard, smoked, fried, and breaded. Main dishes are normally presented alongside red onions, capers, rye bread, and egg. They also can be eaten in a salad, but it is mainly popular for being part of a smørrebrød. Danish food makes pickled herring one of the best tasting fishes to be placed with a sandwich.  Sold in almost all restaurants, it is a deliciousness that is easily accessed and should be tried. 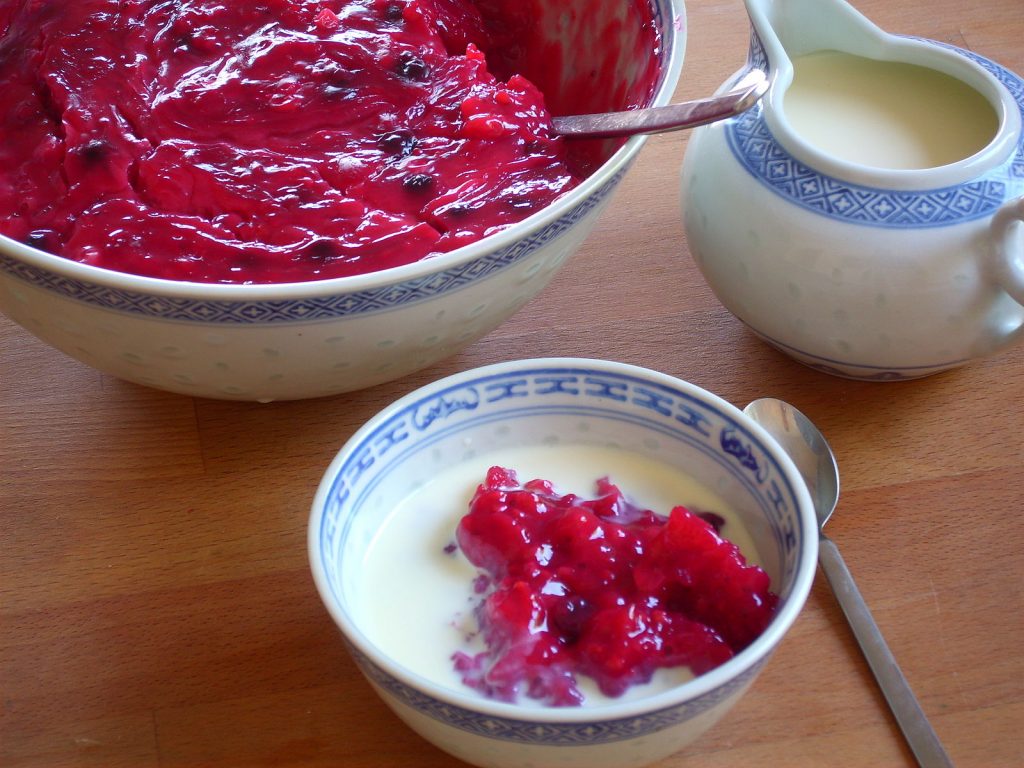 No Danish dinner ends without a Danish dessert. Rødgrød is a sweet fruit dish often eaten during the Summer. Made from groats and rhubarb stalks. This Danish food is commonly known as a pudding with cream.  Rhubarb stalks are boiled and made into a sugary syrup which then is mixed with fruits. To make the creamy texture that makes this traditional cuisine delicious and easily eaten is potato starch. Any fruit can be mixed into a Rødgrød though berries are the most common. This is because as a Summer dessert, strawberries, raspberries, and blackcurrants are Summer fruit.

Rødgrød can be served hot or cold with milk, vanilla sugar, and vanilla sauce. However to make this desert greater and more interesting, add vanilla ice cream or custard. This refreshingly sweet Danish food will make a normal sugar rush seem slow. 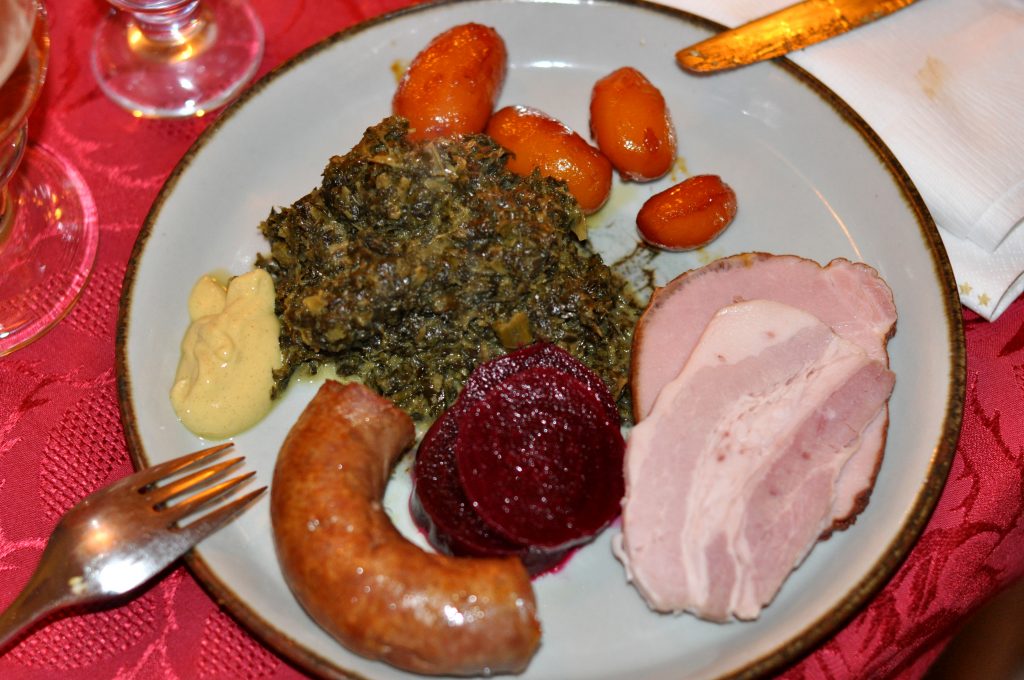 A classic food around the world, sausages are known to be well-liked for its taste and ease of cooking along with the many ways it can be eaten. However, Danish sausages medisterpølse, differ from other types of sausages. Thick and specially spiced, this Danish cuisine consists of minced pork and lard stuffed into a sausage skin. The usual seasoning mixed into medisterpølse is chopped onion, allspice, cloves, salt, and pepper. Also, not to be confused with other popular types of sausages, medisterpølse is thicker than the normal Danish pølse; a long and thin Danish red sausage commonly eaten like a hotdog. Unlike other types of sausages in other countries, medisterpølse is only cooked or fried during the final preparation. So, this means that it should be kept in a cool place, or frozen like all other raw foods.

This Danish traditional cuisine is completed with sides of mashed potatoes, parsley, and pickles. However, if there are any leftovers, medisterpølse can always be used for the Danish favorite snack, smørrebrød. A meal perfect for meat lovers, medisterpølse is a must-try dish when traveling through Denmark. Also, don’t forget to complement this amazing dish with a cold Danish beer. 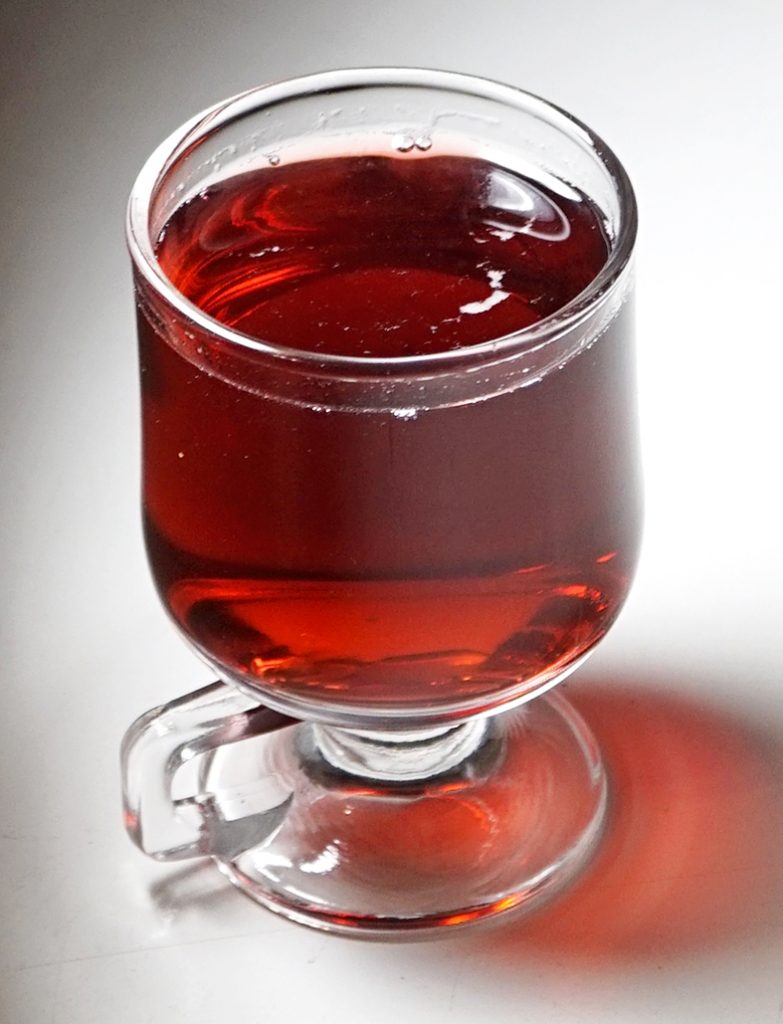 Danish food should always be accompanied by alcohol. Gløgg is a favored spiced, alcoholic drink, served warm during Denmark’s cold Winters. Similar to mulled wine, it was consumed by messengers and postmen who traveled during the cold weather in Scandinavia.  Traditionally, gløgg always welcomes winter with its intense spiced aromas. To create a happily drunken season, water is first boiled and spices are then added. After a few minutes of simmering, the mixture is sieved and wine or clear spirits are mixed into the pot. On occasion, blackcurrant juice is added for a slightly sweeter taste for those who don’t like their alcohol too strong. Besides the spices, sometimes peels of lemons and oranges are also included to enhance the fruity taste. Leave it to settle after a few days and this drink will be ready for consumption. 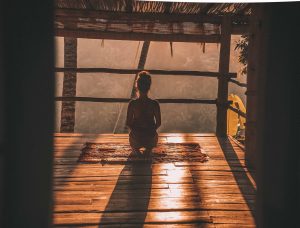 25 Amazing Things To Do In Chiang Rai, Thailand
Prev: 11 Best Things To... Next: Your Ultimate Gui...