Odessa is the most popular travel destination in Ukraine. Flanked by the waves of the Black Sea on the south of Ukraine, Odessa is a port city and seaside resort with a tumultuous history.

The Greeks, Tatars, Turks, Ukrainians, and many other ethnic groups all left traces on Odessa’s history. This cultural diversity forged a region with a distinctive character that has much to offer. Here, you can enjoy a slow pace of life by the sea and explore the multicultural city’s heritage. 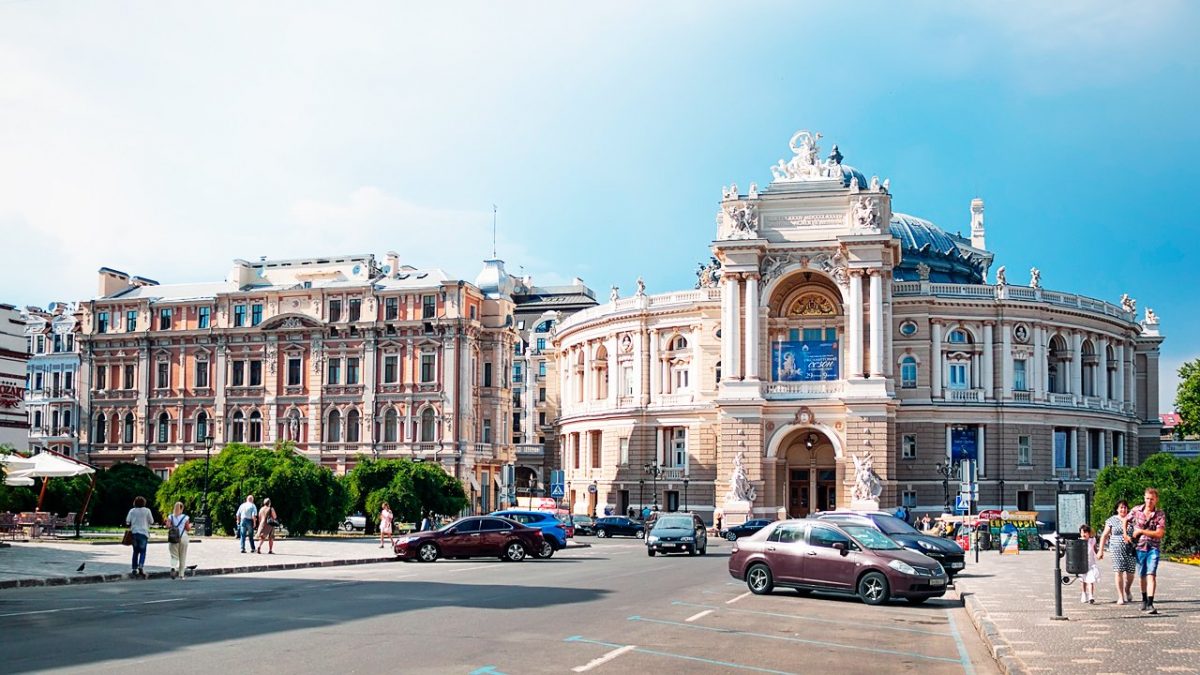 Odessa’s founder José de Ribas served as the inspiration for Derybasivska Street. The street is pedestrian nowadays and is closed to public transport.

As a result, you can take a stroll down the picturesque boulevard paved with iconic cobblestone dating back to the 19th century. People consider it the central street and the major attraction of the city. 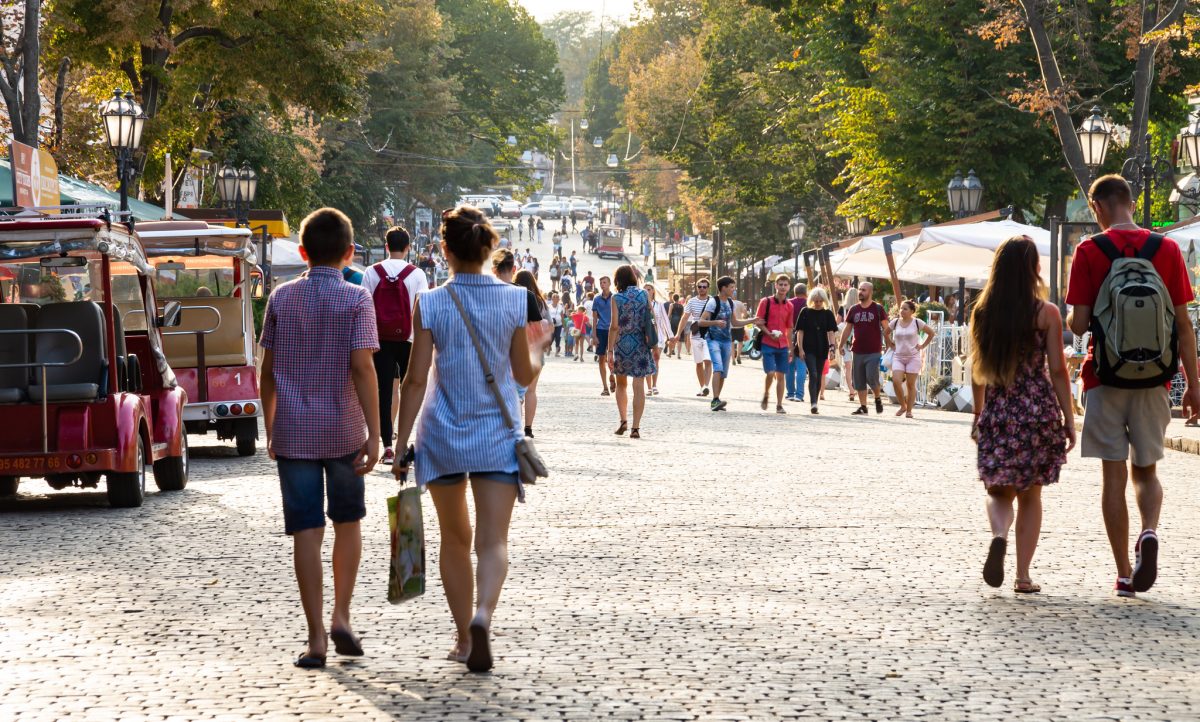 Expensive granite bound by imported Vezuviu lava makes up the street. This is in order to make the road more durable. Here, you can explore beautiful architecture, fountains, gardens, monuments, and local restaurants. Derybasivska St. is a pleasant sight day-in and day-out and it is easy to reach by public transport.

Enjoy The View From Potemkin Stairs

A 10-minute walk from Derybasivska street will take you to another iconic attraction of Odessa. Potemkin Stairs is named one of the most monumental and beautiful stairs in Europe. Its 192 steps lead to the seaside and the city port and were originally designed as the front entrance to Odessa. Many classic works of literature nodded to its greatness and beauty. But the biggest impact on the history of the stairs had a 1925 cinematic masterpiece called the “Battleship Potemkin”. 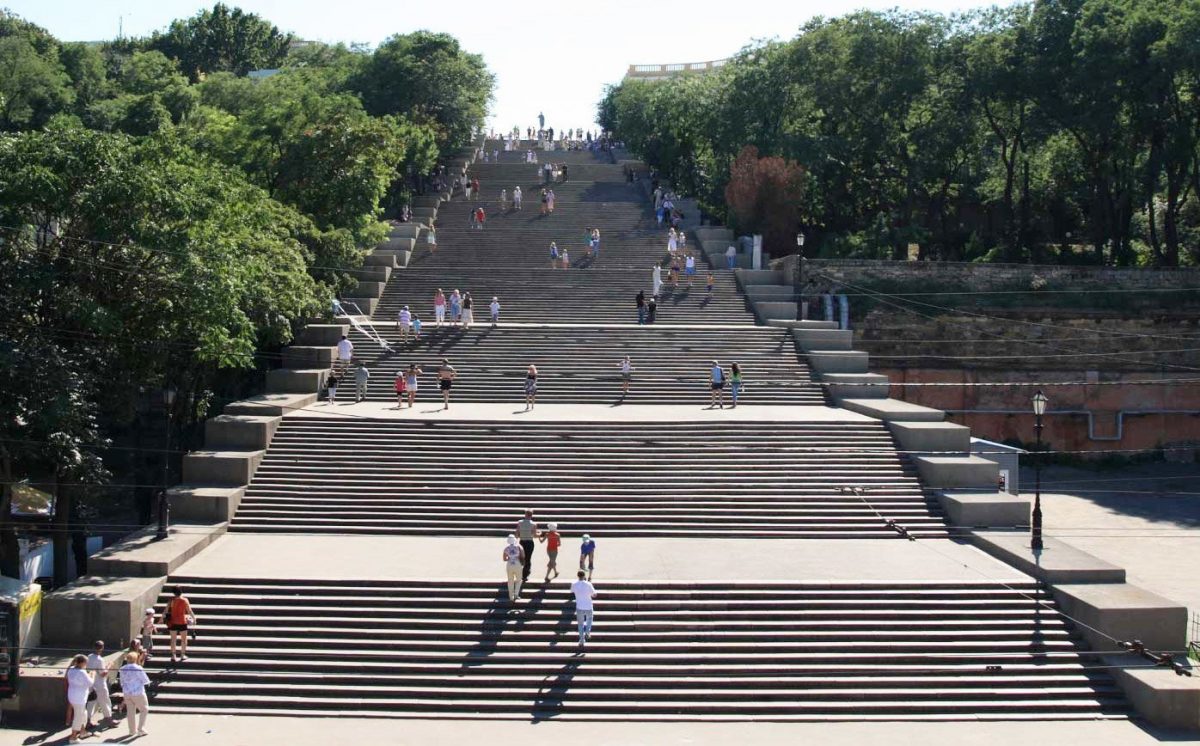 Originally, the stairs were a gift from Duke Vorontsov to his beloved wife Elizaveta. The name of Potemkin stuck to this iconic sight when the famous film that featured a massacre scene on the stairs was put on screens worldwide.

Nevertheless, you can enjoy a breathtaking view of Odessa’s gulf and the beauty of the Black Sea. In addition, you can often catch open-air screenings, street performers, and music shows.

See The Statue Of The Duc De Richelieu 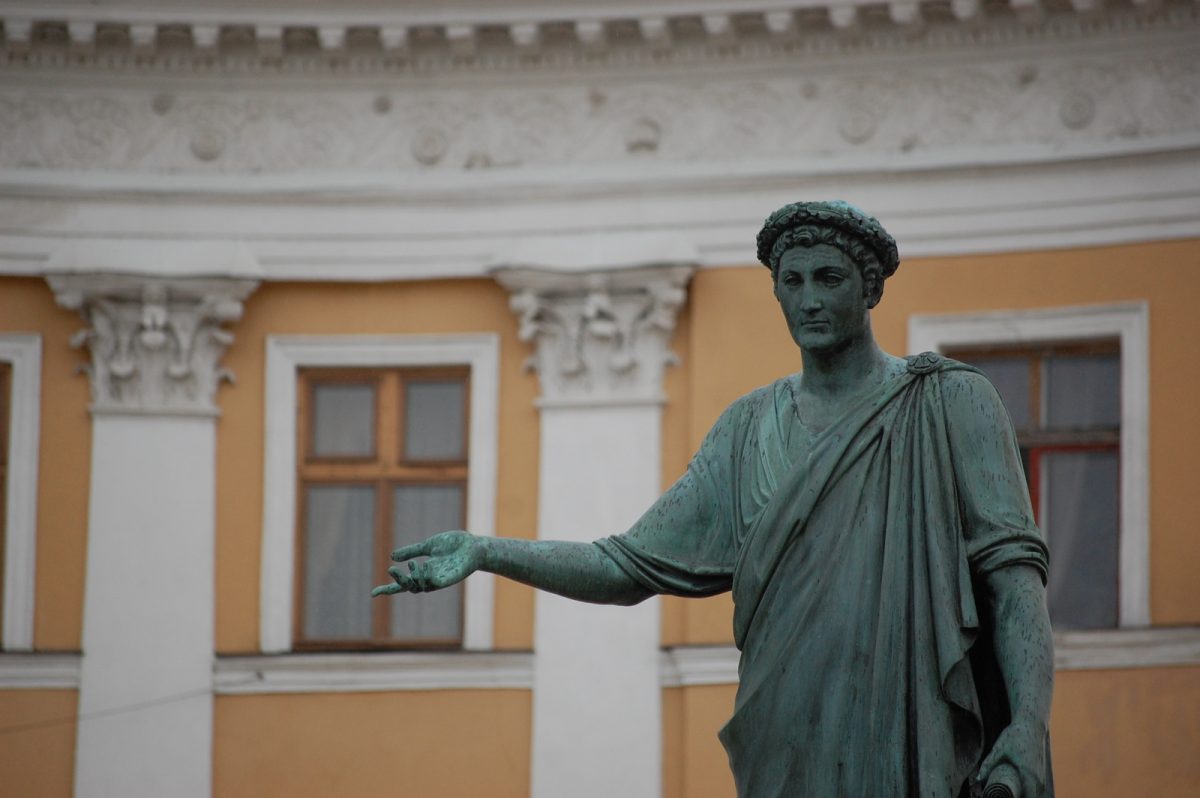 On the bright wide square at the top of the Potemkin stairs, you will find a monument to Armand Emmanuel Sophie Septemanie de Vignerot du Plessis, the fifth Duke of Richelieu.

This man with a long name was a just and wise mayor. Specifically, he made Odessa a prosperous seaport and earned wide respect from its citizens. Three high reliefs adorn a statue dedicated to him. The reliefs signify justice, trade, and agriculture in commemoration of the Duke’s service. 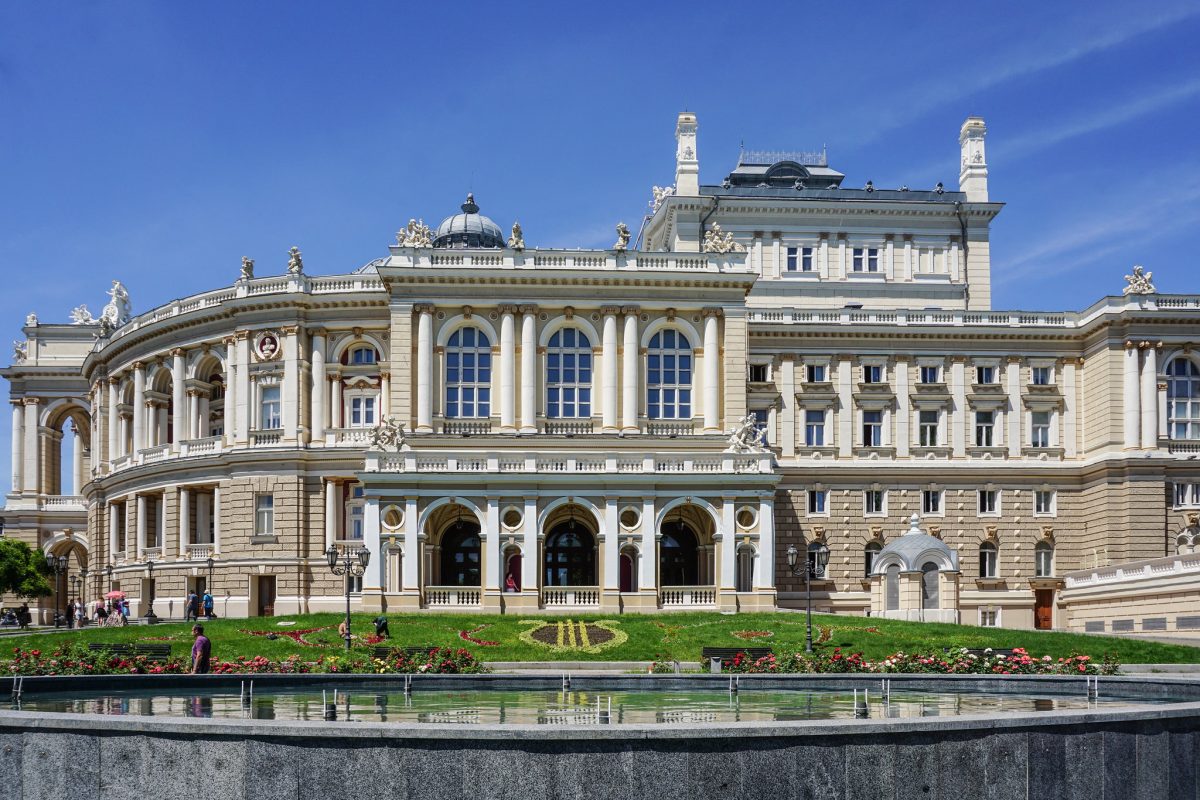 The National Academic Opera and Ballet Theatre is probably the most prominent and beautiful building in Odessa. It boasts one of the most impressive facades in the city. If you are in the mood to see a play or attend an opera performance, you can get a ticket for $3 and up.

Once you are inside, you will get a chance to see the lush, gold-encrusted interior, and a unique 19th-century crystal chandelier in addition to a nuanced performance in Russian or Ukrainian languages.

Take A Trip Through The Mysterious Odessa Catacombs 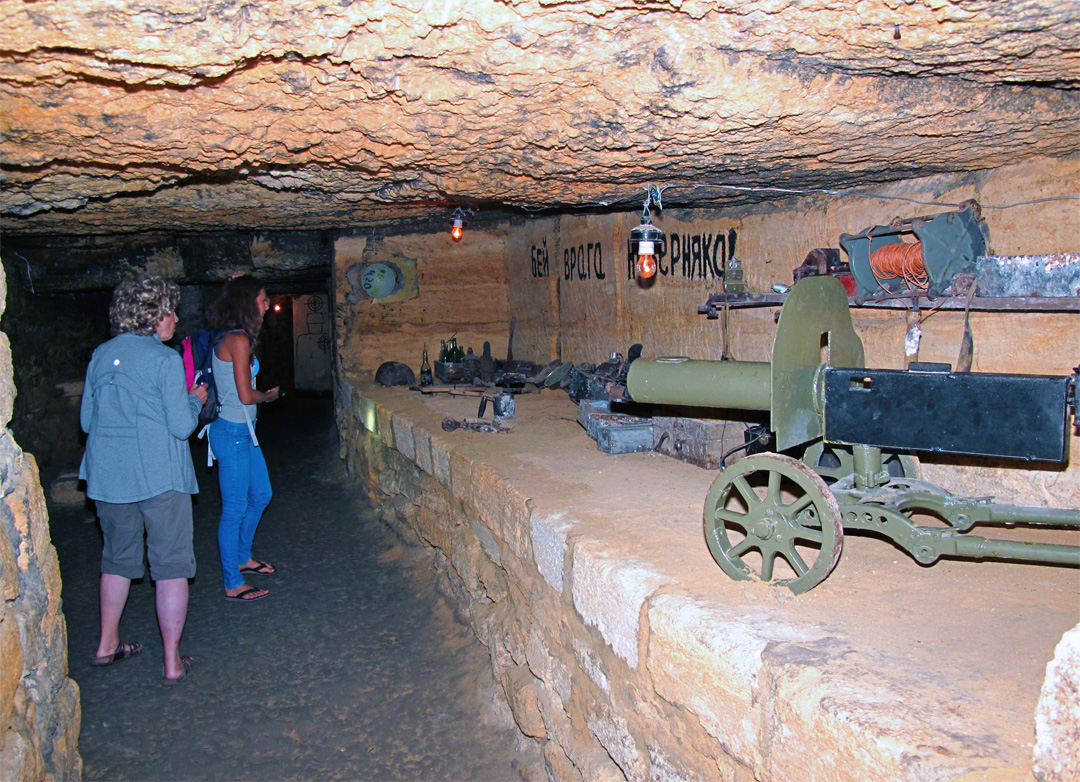 Odessa saw an economic boom in the 1830s. Demand was in for new housing and the city turned to the most accessible and ample deposit of building material — limestone. The vast development turned the limestone mines into 2,500 km of labyrinths, the world’s biggest network of urban tunnels.

Smugglers and other criminals were among the first people to take advantage of the Odessa catacombs. During WWII, these catacombs became passageways and hideouts for local partisans. Nowadays, catacombs are a mecca for diggers and tourists who want to see the darker side of Odessa’s history.

Walking tours take 2.5 hours and cost approximately $10 per person. Keep in mind that the temperature in catacombs is significantly lower even during the summer so we recommend bringing some extra clothes.

Take A Tour Of Vorontsov Palace 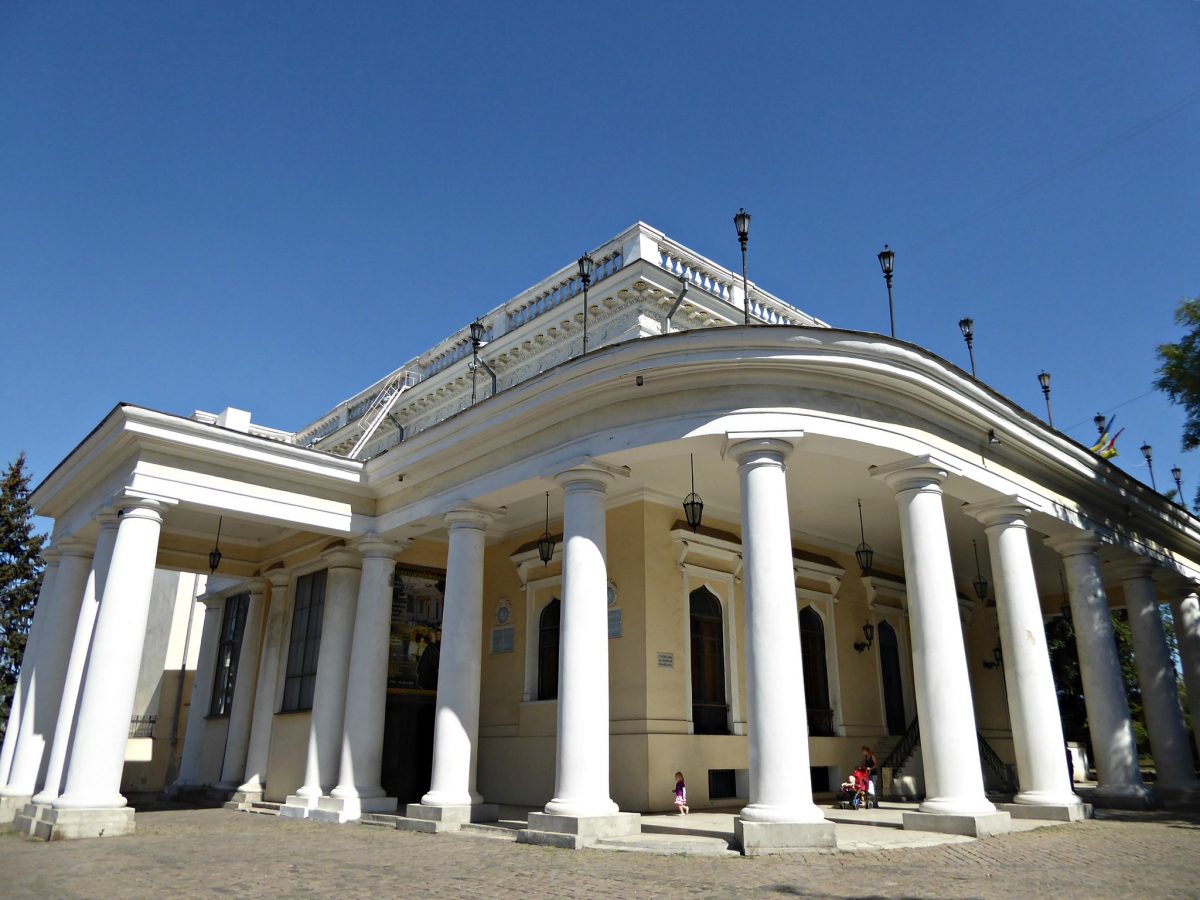 Vorontsov Palace was never a royal residence. Duke Mikhailo Vorontsov, a governor-general of Odessa region, once owned the palace. This building is yet another architectural gem of Odessa and is well worth the visit. Most tourists come to the palace to take a picture at Vorontsov Palace colonnade and to enjoy a beautiful sea vista. However, if you fancy a tour of its interior, be advised that it is only open on weekdays from 9 AM till 4 PM.

Take a Walk Around Shevchenko Park

Shevchenko Park was named after one of the most famous Ukrainian poets. Its shadowy alleys offer a great retreat from the summer heat or the gusts of salty winds. Wander down the paths that the great literary minds like Gogol, Chekhov, Dostoevsky, and Pushkin once took. 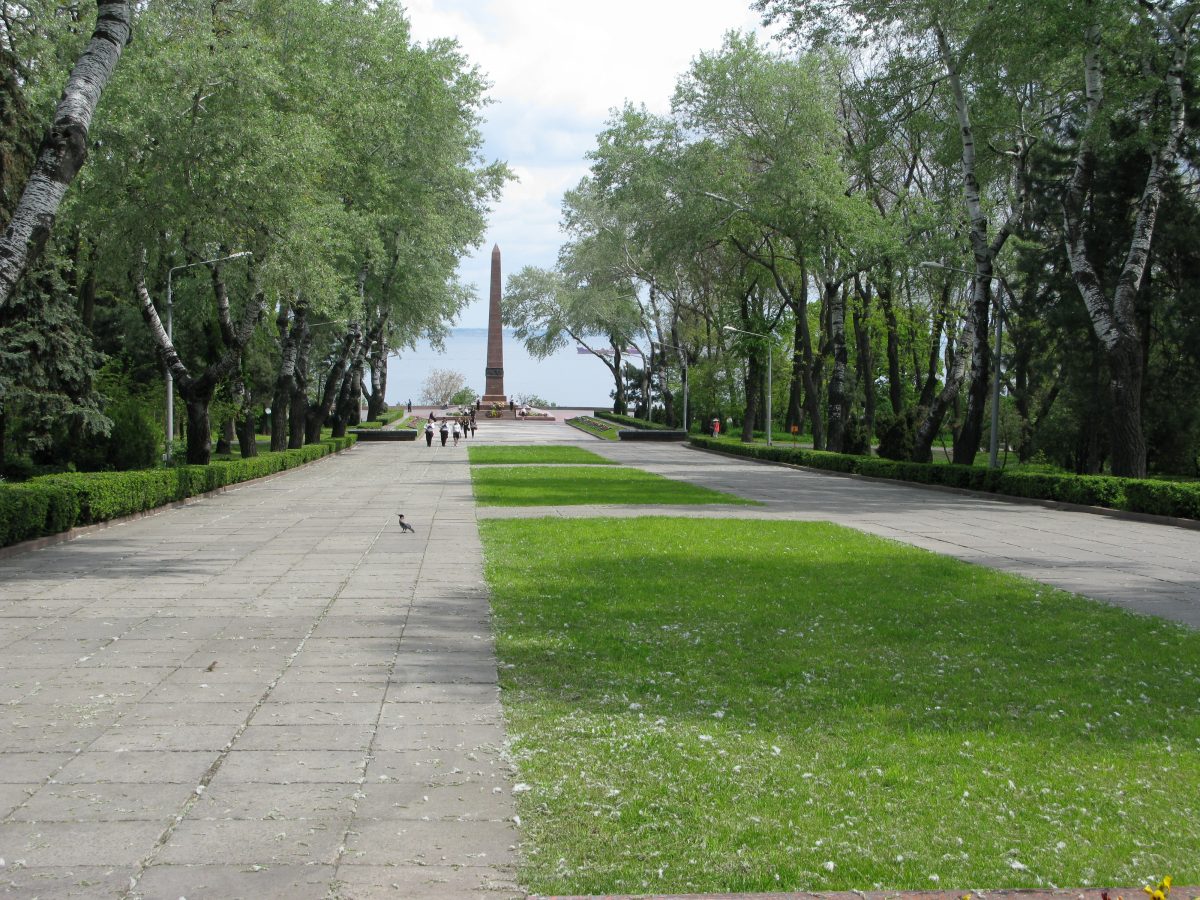 The park stretches to Langeron beach — one of the most popular spots for beach leisure in Odessa. Shevchenko Park is located on Marazliivska St. and can easily be reached by public transport or a car.

Consider it a wasted trip to Odessa if you haven’t visited its beaches. Arkadia beach is a perfect place for you to relax on the warm sand under the sun of “Southern Palmira”. In the summer season, after sundown, it becomes the hottest place in town for nightlife.

Arkadia beach is located on the Odessa outskirts and can be reached by public buses during the day or with a $10 taxi ride from the city centre. 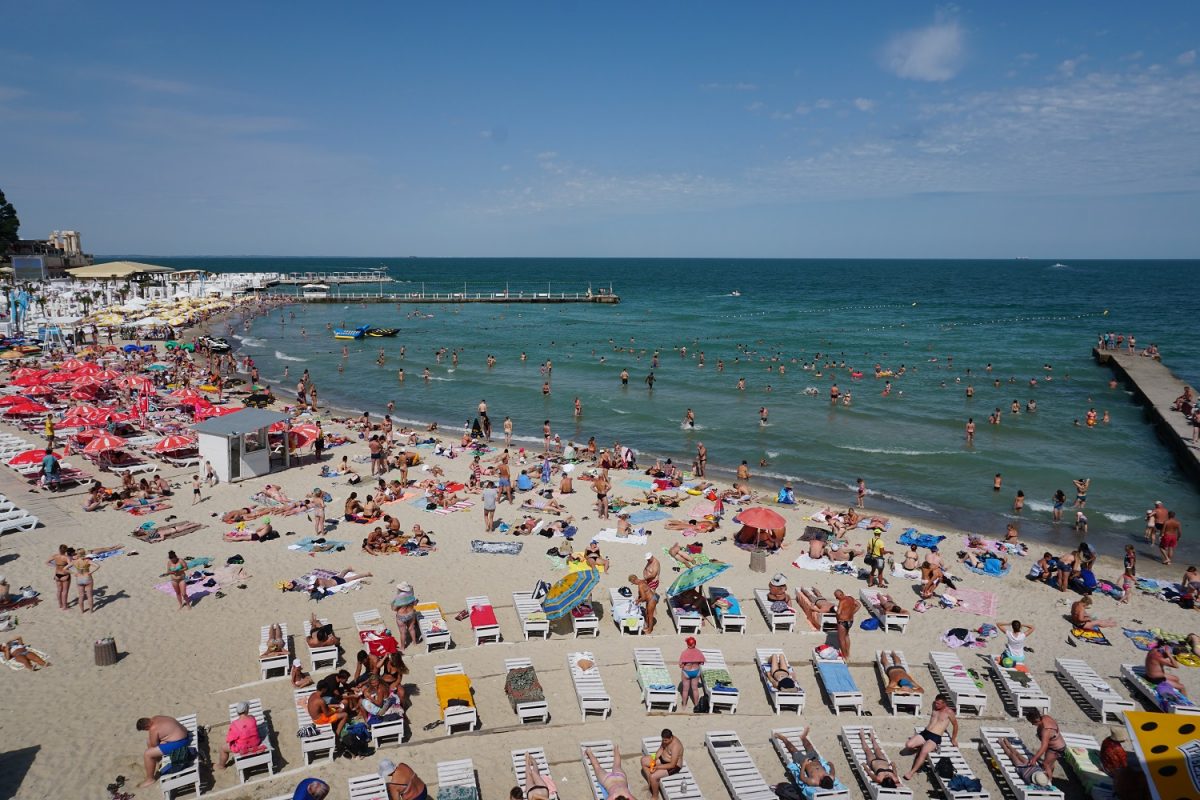 Since 2010, Odessa annually gathers celebrities, filmmakers, and film geeks from all over the world. As a result, it has become a home for one of the biggest film festivals in Eastern Europe. 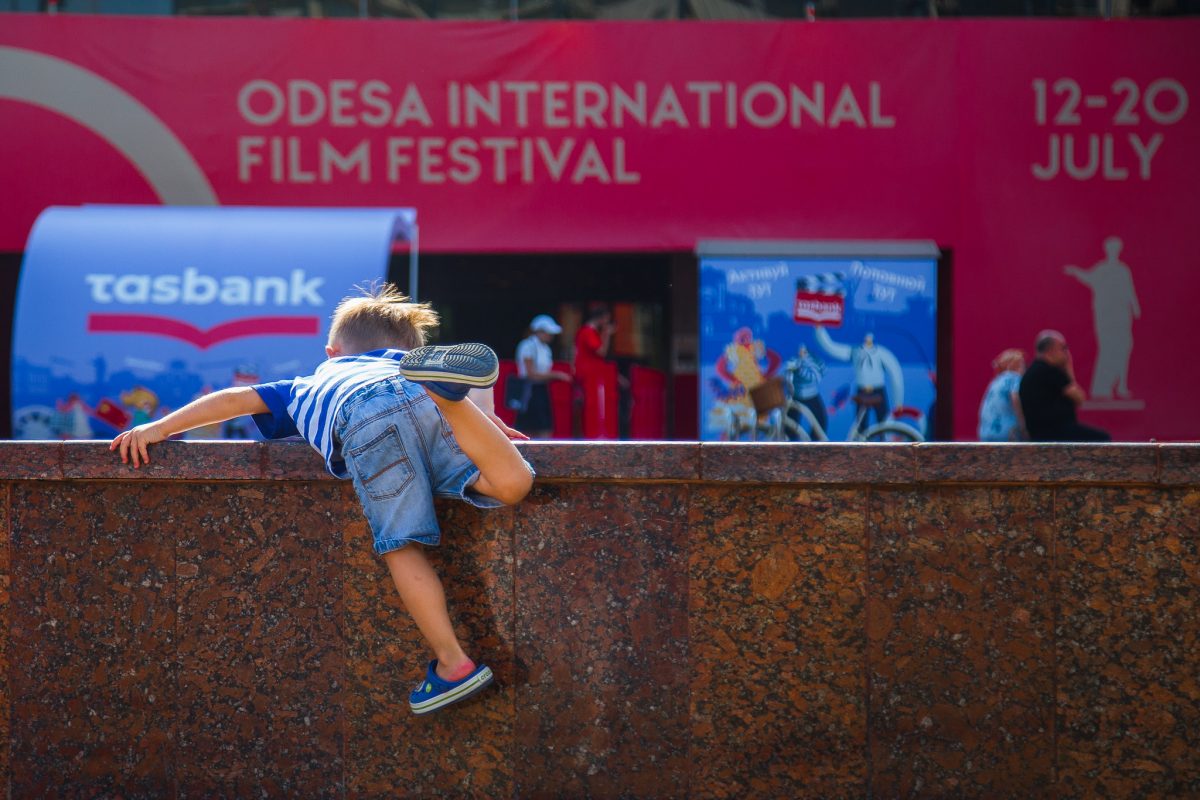 Historic locations hosting festival films around the city, open-air screenings of classic films with a live orchestra, thematic dishes at local restaurants, and a week-long atmosphere of festivity without an end are just a few reasons to come and enjoy Odessa during the festival in mid-July!

As a local saying goes: “You haven’t seen the real Odessa if you haven’t visited Privoz Market”. And for good reason! The largest food market in Odessa was founded in 1827.

People come here from all over the place to shop for everything ranging from food like caviar to rare goods from overseas such as flea-market wares. 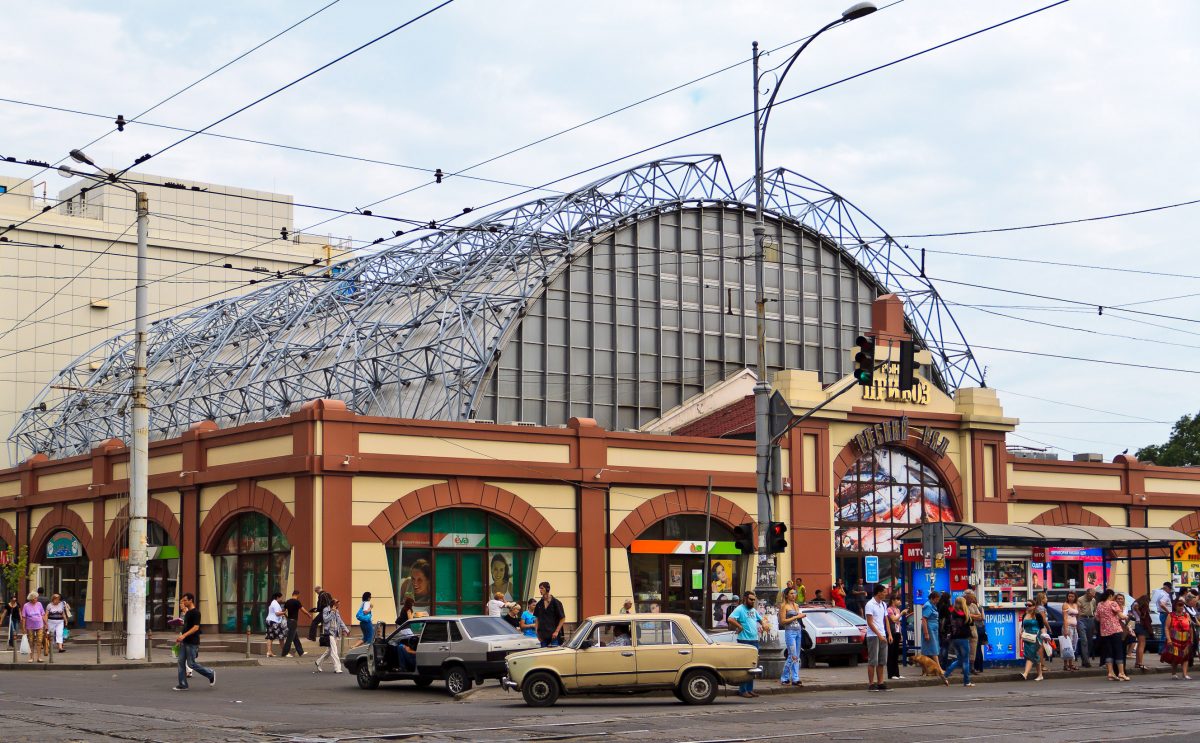 Odessa citizens flock to Privoz market not just to shop but also to exchange city news and the latest rumours. This market has become a local phenomenon making “Privoz” a common name for newspapers in Ukraine.

Local vendors are famous for their warm hearts and a great sense of humour. If you are good at bargaining, this Odessa market is the place to bargain your way for a better price. The market is located on 14 Pryvozna Street and is open every day from 7 AM to 7 PM.

Where To Eat In Odessa

There are plenty of places where you can taste local Ukrainian cuisine in Odessa. Almost every crowded street has a couple of good restaurants for you to try out. Here are our local picks. 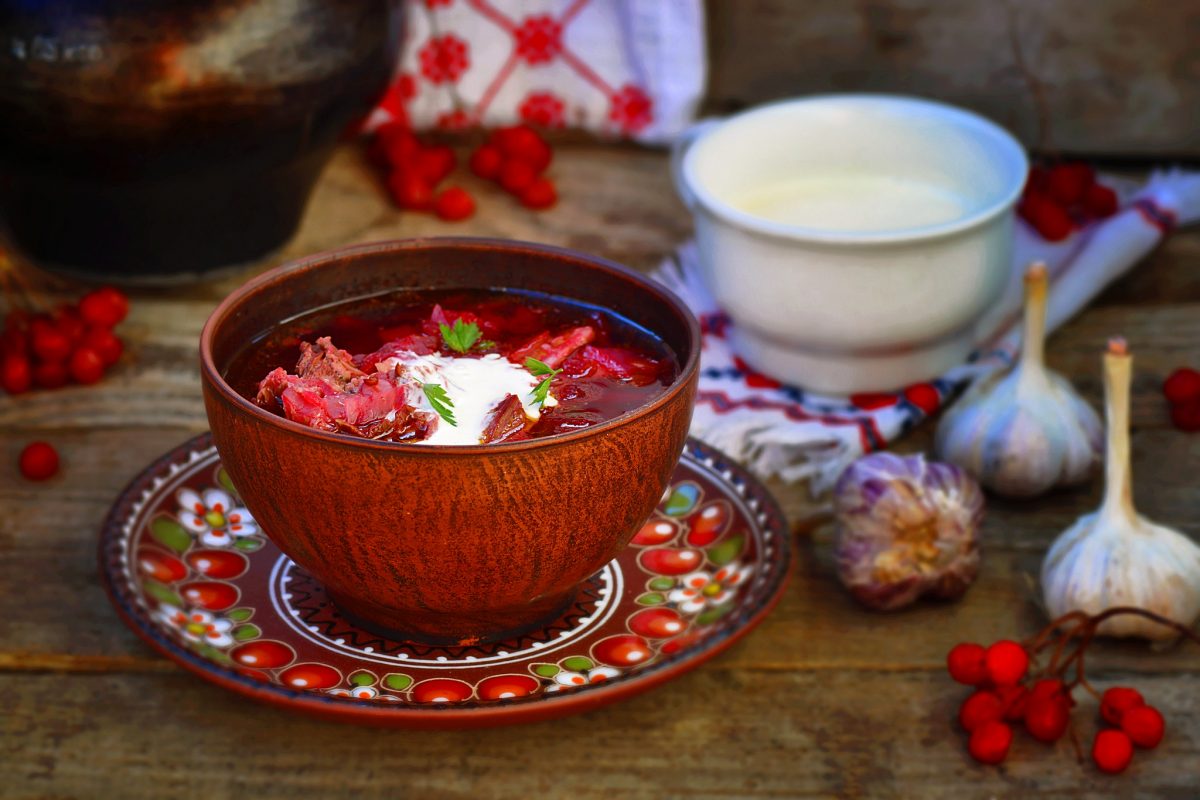 Datcha stands for countryside house in Slavic. Taste some of the authentic Odessa dishes here! There is borscht with sour cream, egg hummus, “chebureks” and “pierogi” with “kvass” all as if you came to visit your Slavic grandma. For those with a less adventurous palate, the restaurant also serves classic European dishes. 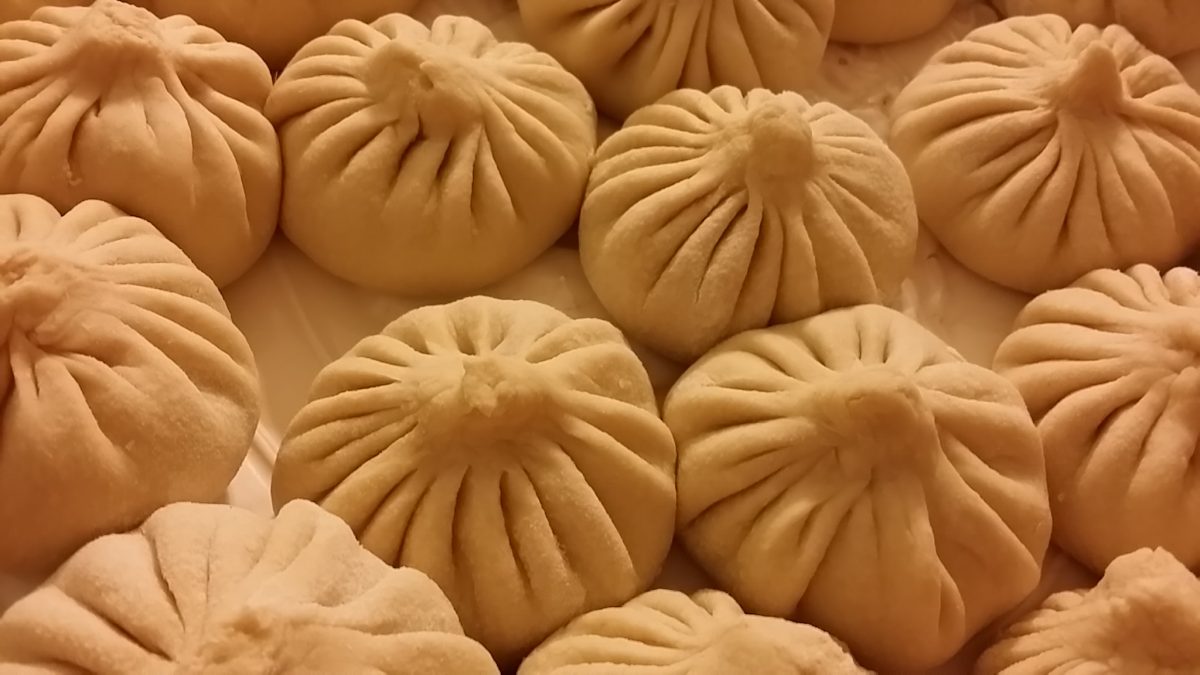 The restaurant is located on Rishelievska Street, 9А and is open every day from 11 AM to 11 PM. To stuff your belly full, plan on spending at least $10-15 per person. 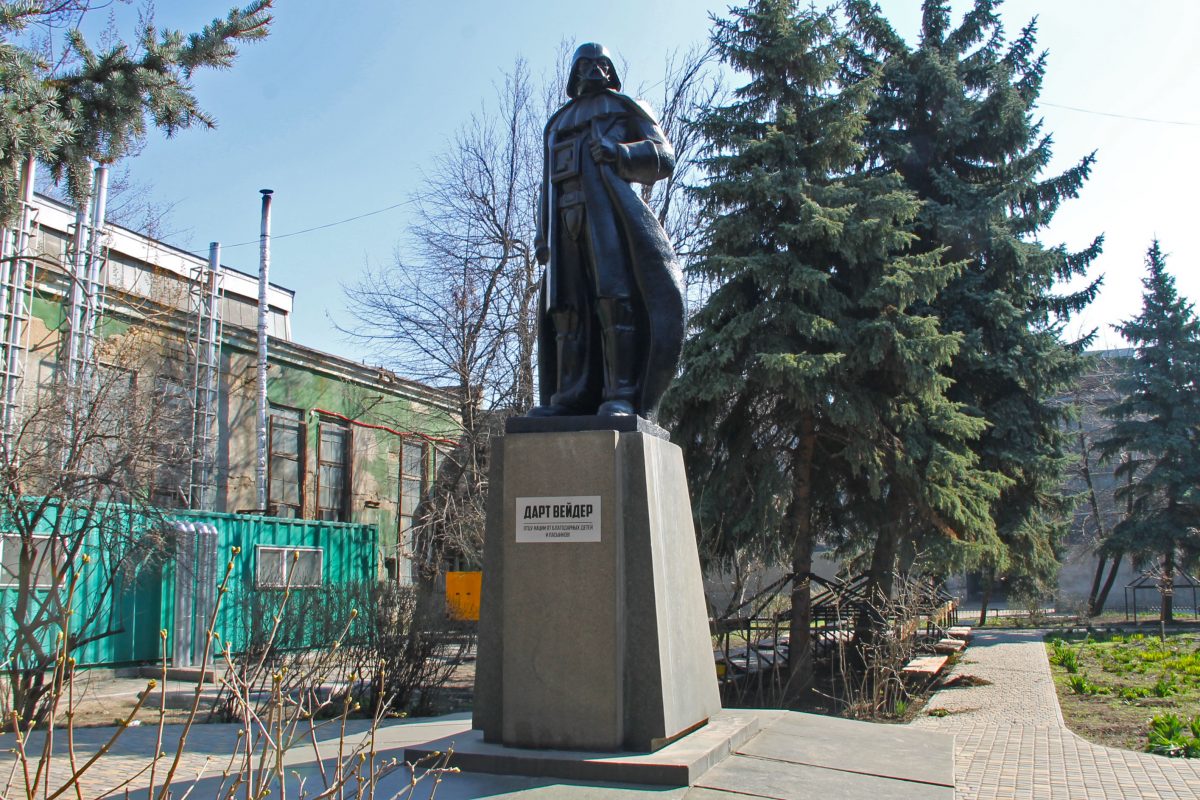 The Force is strong with Odessa. Back in 2015, in an effort to shake off its communist past, the Ukranian government passed a “decommunization” law. As a result, the country changed some street names and demolished Soviet monuments. However, sly Odessans found a way to repurpose a statue of Lenin.

What once was the “Chief of the world’s proletariat” was remade into the iconic character of space saga Darth Vader. It is hard to say whether this act turned the statue to the dark side of the Force even more but its popularity with tourists rose tremendously. To find this monument you’ll need to use the Force, my young traveller. It eventually will guide you to 28 Stovpova St.

Check Out The Monument To The Bribe 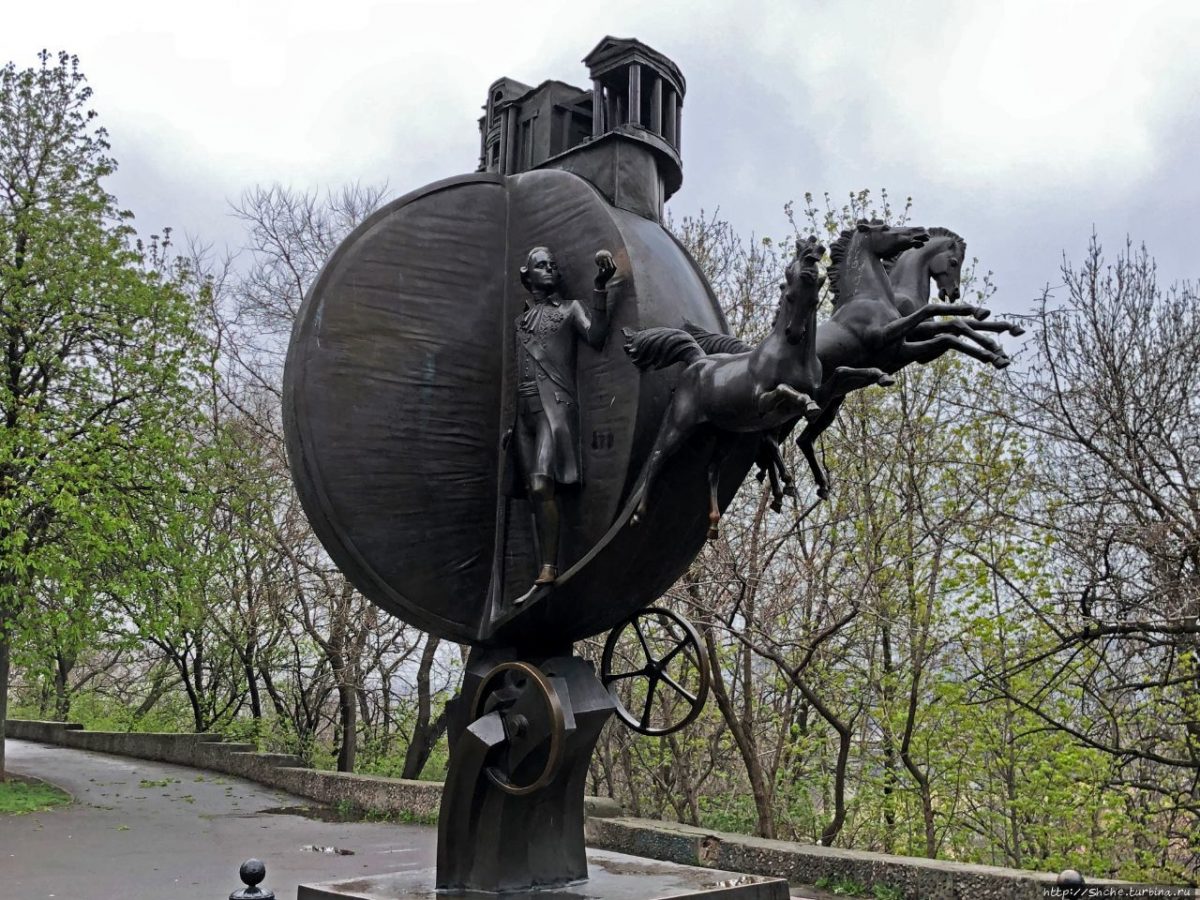 This statue, also known as a monument to a tangerine, comes with an urban legend. During the Russian Empire, Odessa often received funding directly from Catherine II. However, when her son Pavel came to power, he cut the money for the city short.

Thus Odessans decided to present Pavel with a delicious treat he had never tasted before. This bribe of tangerines appealed to the young emperor’s taste so he renewed funding for the city.

Take A Tour At Odessa Museum Of Western And Eastern Art

The old mansion built in 1876 has become a place where two polarities meet. This art museum hosts fascinating exhibitions of paintings, sculptures, porcelain, furniture and more.

In the west hall, you will find famous paintings of European masters, including such famous canvases as “St. Luke, Evangelist” and “St. Matthew, Evangelist”. You will also have a chance to admire the works of Ukranian artists such as Mihaly Munkachi. 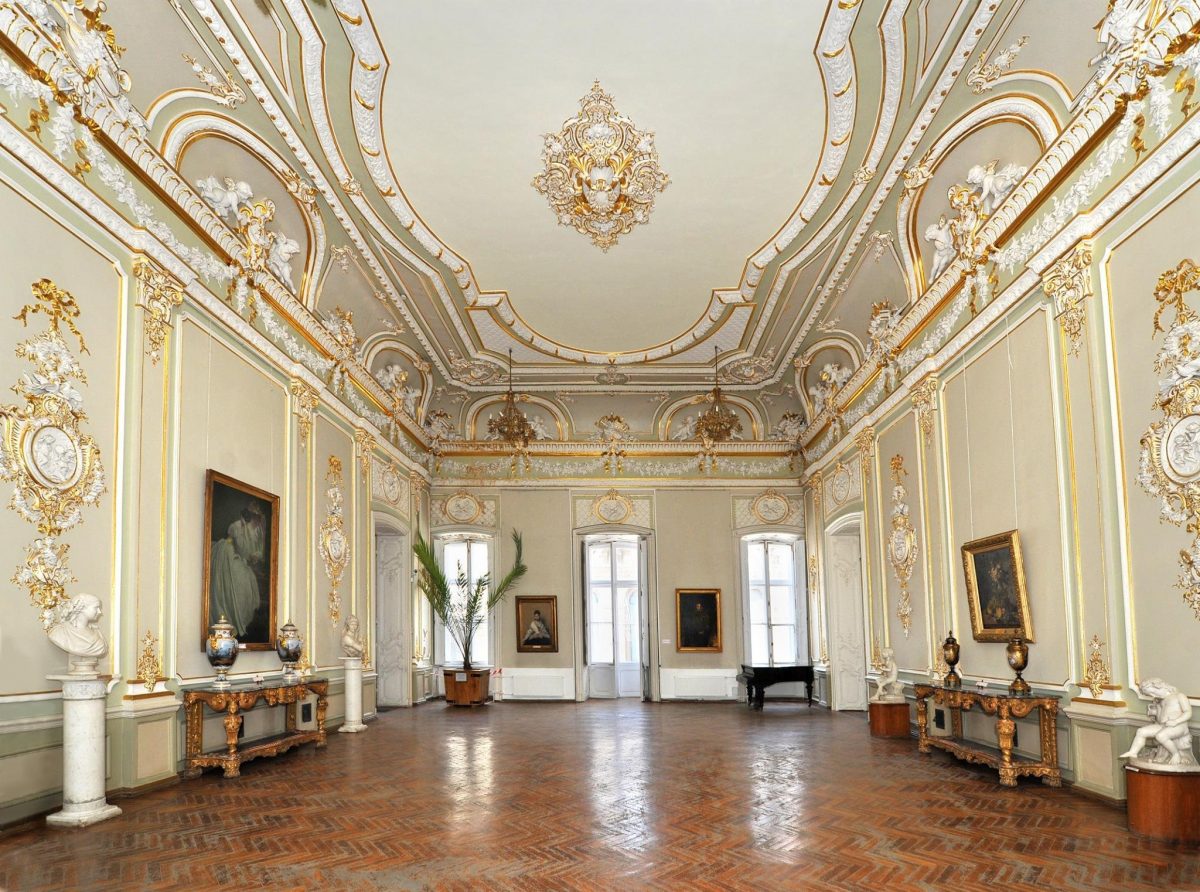 In the east hall, the collections of silk paintings, ancient weapons, porcelain, statues, and many other items from 16-17th century Chinese, Japanese, Indian, Iranian, and Tibetian masters will please your eye. You can find the museum on 9 Pushkinskaya St. It is open every day except Wednesday from 10:30 AM to 6 PM. An entrance ticket costs $1.5 for adults and $1 for children.

A famous Soviet singer Leonid Utesov described Odessa as the city by the Black Sea lit up with blooming acacias. Moreover, ruthless wars have damaged the city though its unbent people have rebuilt it and further beautified it since then.

There is so much more to see in Odessa that even two vacations won’t be enough. It is a place for an affordable but memorable vacation that will leave you wanting to come back and indulge in all Odessa has to offer. Odessa will patiently wait for you to return and discover more of its hidden treasures. 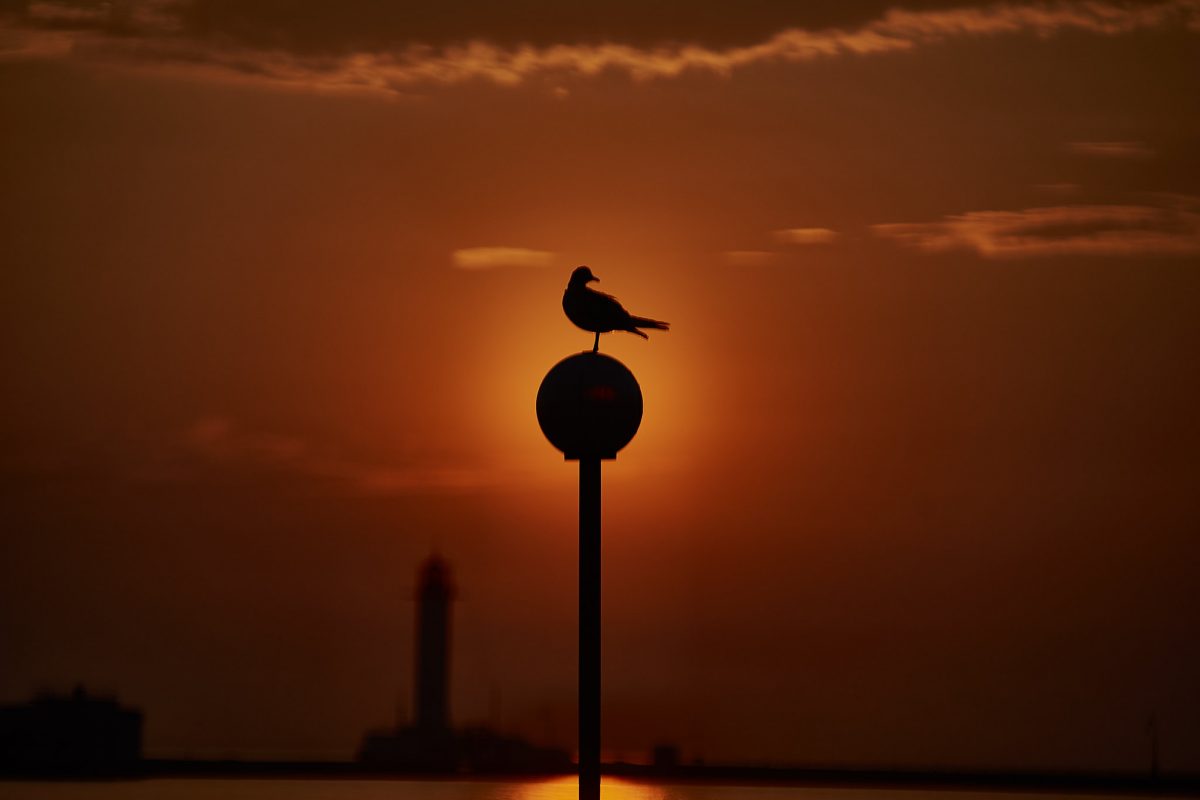 If you enjoyed reading about the ins and outs of Odessa, be sure to check out the different activities offered in Zurich, Switzerland.