The Northern Lights, visible from northern latitudes during winter and neighbouring seasons, are an unforgettable divine spectacle. In fact, famed Aurora Borealis is a violent storm that rages hundreds of kilometres above Earth.

Favourable weather conditions are another basic factor that determines whether you will enjoy seeing the Aurora Borealis or a cloudy sky. Also, you should avoid settlements since unnatural illumination may prevent you from having the best experience. 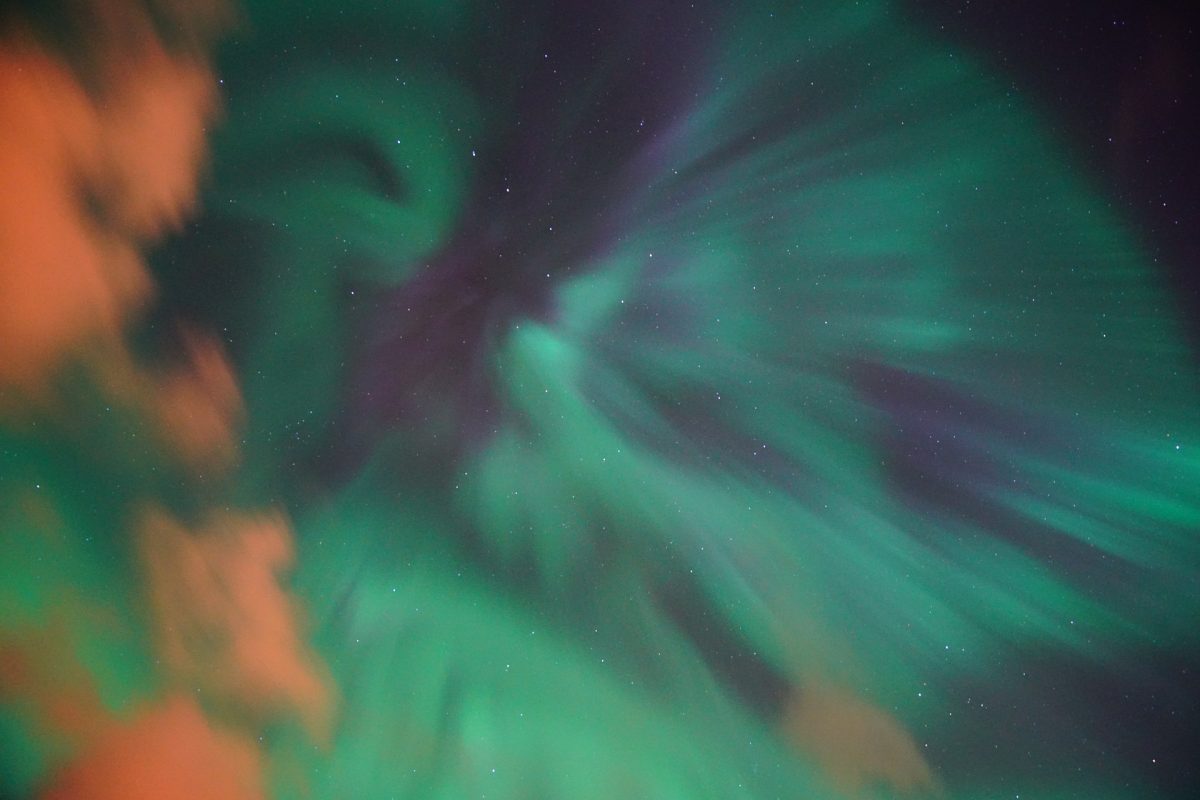 Photo by Hans on Pixabay

Hence, take the steering wheel in your hands and explore the countryside where the light pollution is low or non-existent. Due to its low population and close proximity to the Arctic Circle, Iceland is an ideal place for experiencing the Northern Lights.

What’s more, passable Ring Road goes around the island. It allows you to find a better place for observing the Aurora Borealis if the clouds prove unwilling to cooperate. Continue reading to learn when is the best time to visit Iceland for the most famous nighttime spectacle on Earth.

What The Northern Lights Are?

Most people who experience the Northern Lights describe the phenomenon as otherworldly. Whether they know it or not, they are right.

To us, the Aurora Borealis is a show of dancing lights that pleases the eye. In truth, the display is an outcome of a struggle between solar energy and the Earth’s magnetic field (magnetosphere).

Before we determine what is the best place and when the best time to see the Northern Lights are, we will have an overview of the Earth’s magnetic field. It consists of magnetic field lines that go around our planet in shape resembling, more or less, the ellipsoid. 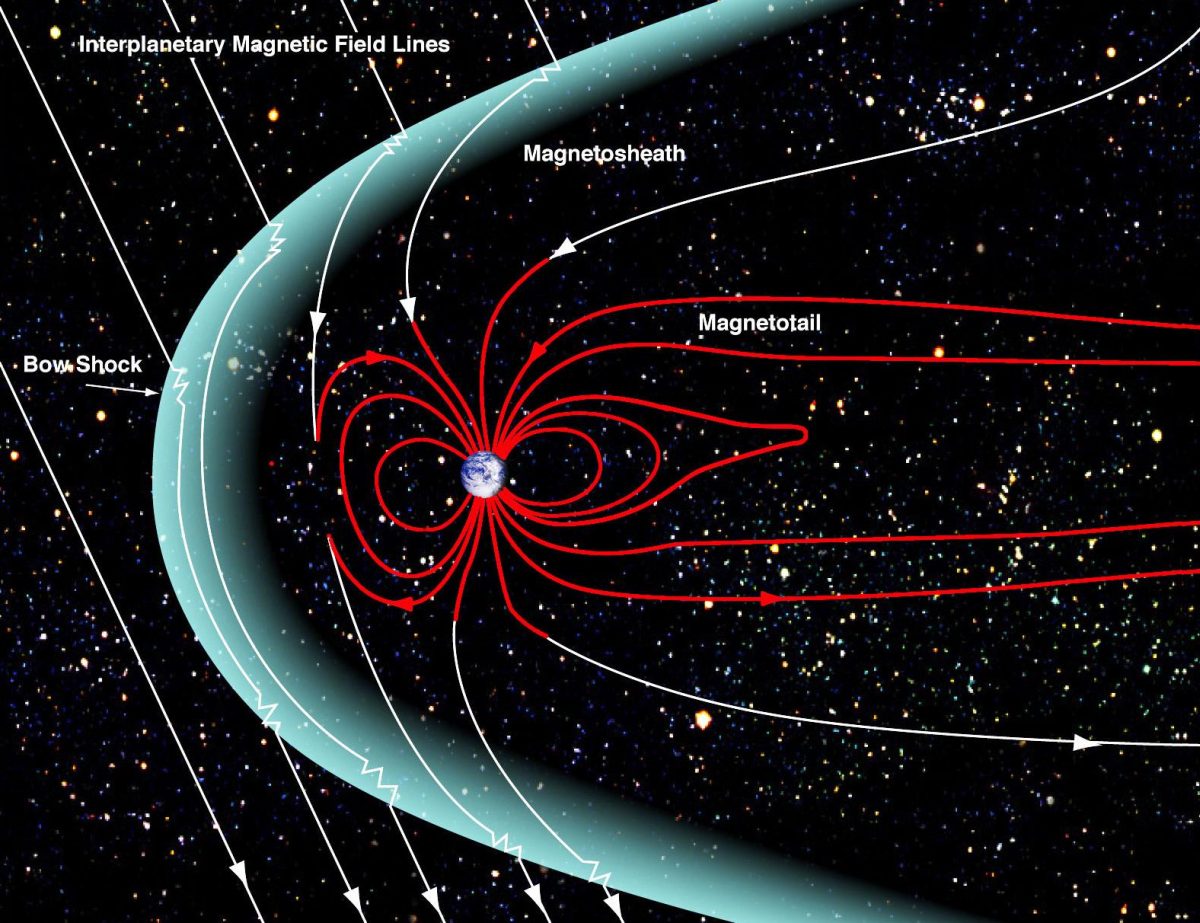 The magnetosphere is a layer that protects the Earth from emissions from the universe. The magnetism originates at the North and the South magnetic poles, which nearly correspond to geographical North and South poles.

As it happens, these magnetic poles are where the Northern Lights show unfolds. Magnetic field lines loop out from the poles in wide circles and meet at the opposite magnetic pole.

The magnetic protection of the Earth is the weakest at the poles. Hence, charged particles penetrate the atmosphere and collide with its gaseous particles. The Northern Lights display is the result.

When Is The Best Time To See The Northern Lights In Iceland?

Iceland lies deep in the north by most peoples’ standards, just beyond the edge of the Arctic Circle. Hence, it is among the best places to see the Northern Lights in the world.

Because of its geographic position, this northern-European island features long nights in winter and even longer days in summer (midnight sun). Hence, forget about seeing the Aurora Borealis from late April till late August in Iceland.

Seeing the Northern Lights is possible even in late August and early April. However, the actual Aurora Borealis hunting season takes place from October to March.

Still, seeing the dancing multicoloured lights isn’t granted even then. To increase your chances of seeing the Northern Lights, pay attention to the next chapter.

Iceland Weather And The Aurora Borealis Periods Of Activity

The best time to see the Northern Lights corresponds to nights and clear skies. The darker the night is, the brighter the multicoloured show is. On such nights, you may catch yourself with mouth wide open as appreciating bright and dark colours swirling in unpredictable ways. 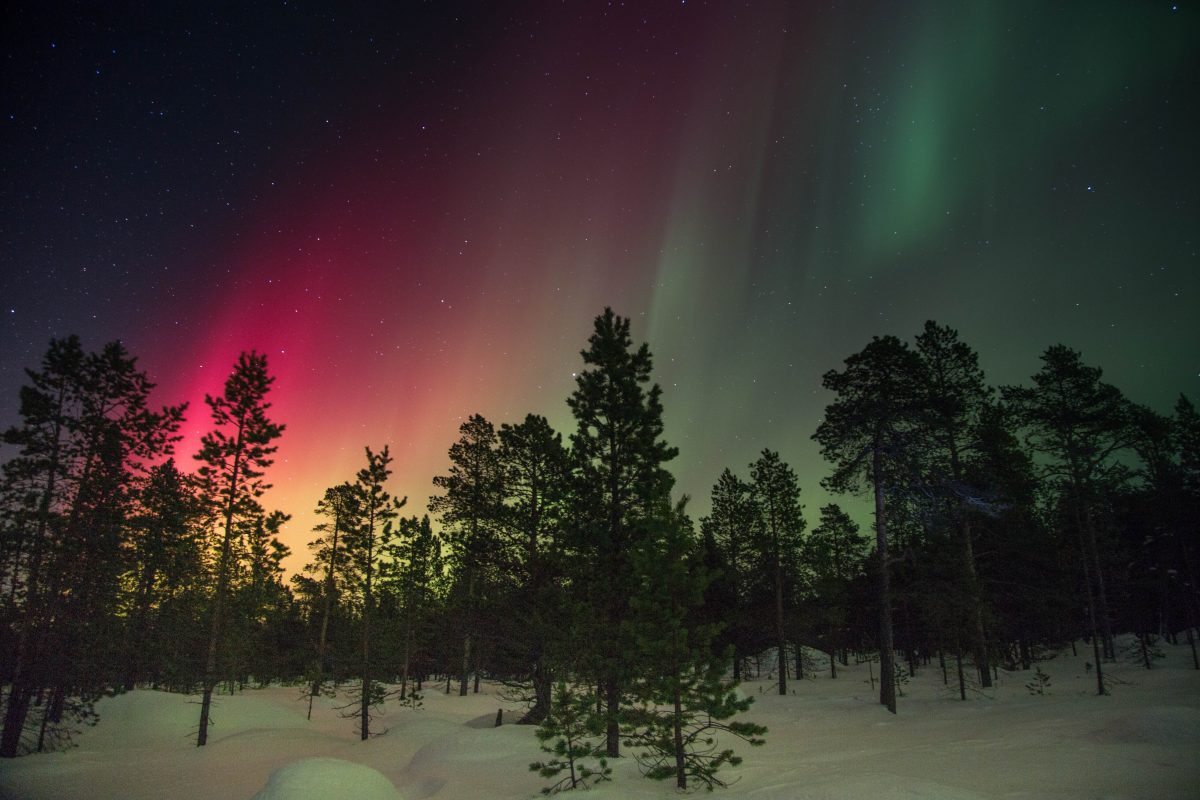 Photo by Nelly Volkovich from Unsplash

The Northern Lights forecast is another thing you should have in mind when booking a ticket for a flight to Iceland. Iceland weather is quite unpredictable at best. Many Icelanders say “If you don’t like the weather, just wait a few minutes.”

Therefore, keep the Northern Lights forecast regularly in check to improve the chances of seeing the lights. If all of the aforementioned aren’t enough, there are low and high-activity periods involved to make the Aurora Borealis matter even more entertaining.

So, for higher chances to benefit from a high-activity period and clear sky, your stay in Iceland should be as long as possible. Plan to stay in Iceland at least a week.

Where To Go To Watch The Light Show?

Here’s a simple tip regarding the Northern Lights. The farther north you are, the better the light show is. That is true not only for Iceland but for any place where the Aurora Borealis is visible. 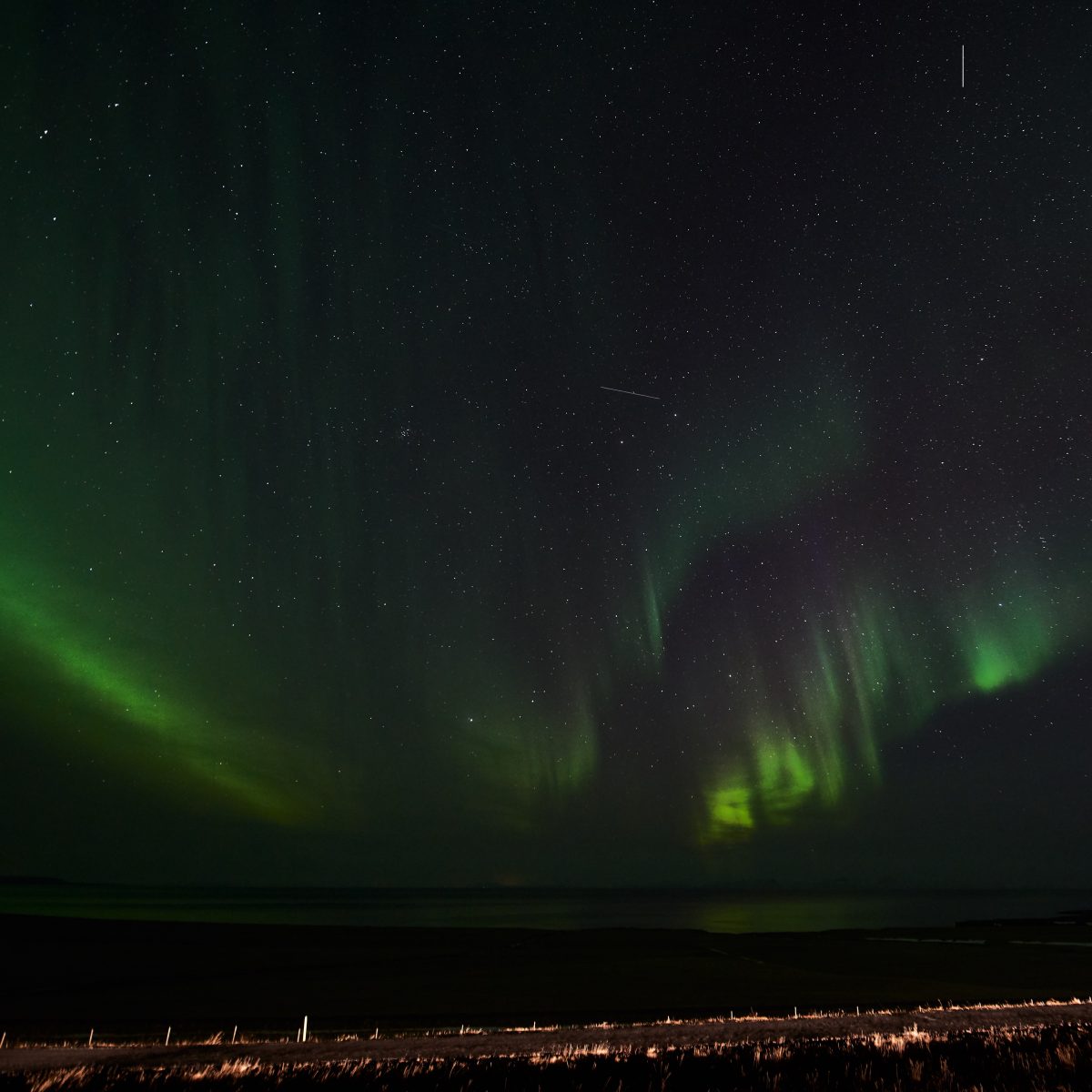 Photo by Martin Brechtl from Unsplash

You can stay in the south of Iceland, around the Golden Circle (Thingvellir, Gullfoss, Geysir Hot Springs), for example, and have a great time while enjoying the show. Still, if you are somewhere within the Diamond Circle (Dettifoss, Goðafoss), the Northern Lights show will delight you more.

Therefore, you should head to the northern regions of Iceland for the best Aurora Borealis experience. Furthermore, you should avoid being near the settlements. Street and other illumination obscure the heavenly light all too easily.

Nevertheless, experiencing the Northern Lights isn’t impossible even around Reykjavik if the circumstances prevent you from a trip. Still, put some distance between yourself and the city when searching for the right spot for the nightly performance.

The Best Places In Iceland For Admiring The Nighttime Spectacle

Since we have sorted out when is the best time to visit Iceland to see the Aurora Borealis, let’s see now what the best places to see the Northern Lights are.

Do you recall the scenes from The Game Of Thrones when the band of heroes heads north to capture a wight? If you do, you have seen Kirkjufell as “the arrowhead mountain.”

Kirkjufell makes a stunning backdrop for the Aurora Borealis celestial spectacle, especially if you stand by a nearby waterfall. If you prefer unobscured views, there is a path winding up to the top of the mountain. 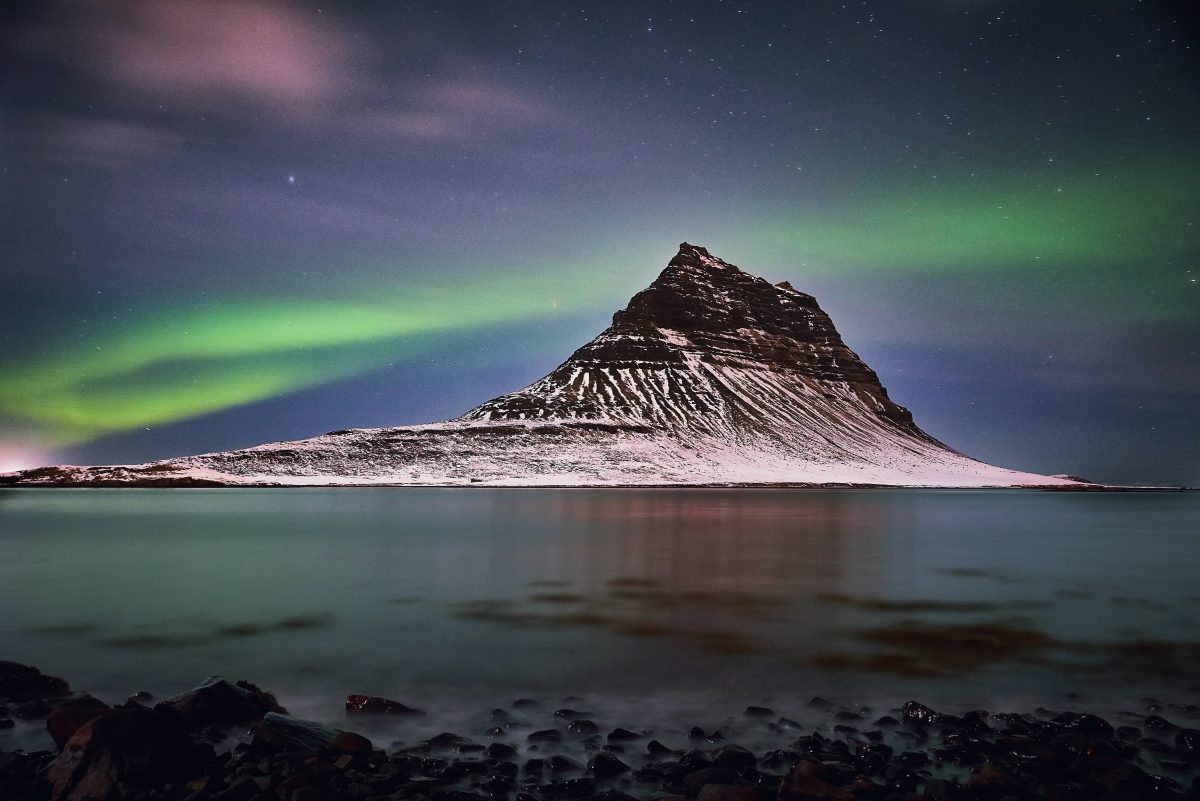 Photo by Landon Arnold from Unsplash

Godafoss, or the Waterfall of the Gods, is a semicircular marvel of nature. Located in the Diamond Circle, the waterfall features blue and green waters that reflect the colours of the Aurora Borealis to some extent. Circular Ring Road takes you to the Godafoss. 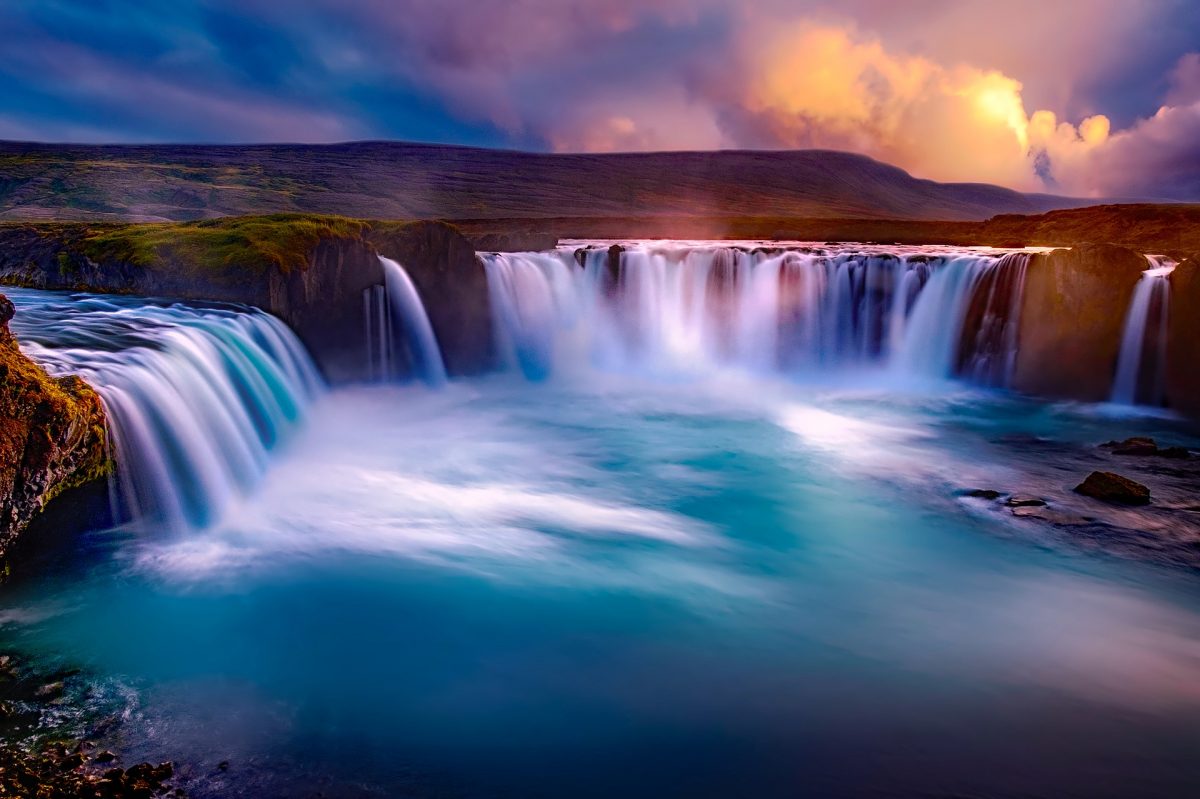 Photo by David Mark from Pixabay

Asbyrigi, also in the Diamond Circle, is a horseshoe-shaped canyon split lengthwise by a rock that is about 25-meter/82-foot high. A forest fills the gap between the rock and the 100-meter/328-foot high cliffs.

Climb the rock via a path on its east side and combine the benefits of a spectacular background and the Northern Lights display.

If you can’t manage to go north to see the Aurora Borealis, the Grotta nature reserve near Reykjavik will do. The reserve occupies a peninsula that is a good place for birdwatching. Albeit you won’t be north, at least by the Icelandic standards, dress well to avoid catching a cold.

Should You Get Around On Your Own Or Join A Tour?

When you become an Aurora Borealis hunter, the successful hunt means high mobility. For that, you should rent a 4×4 vehicle if you decide to do the hunting yourself. 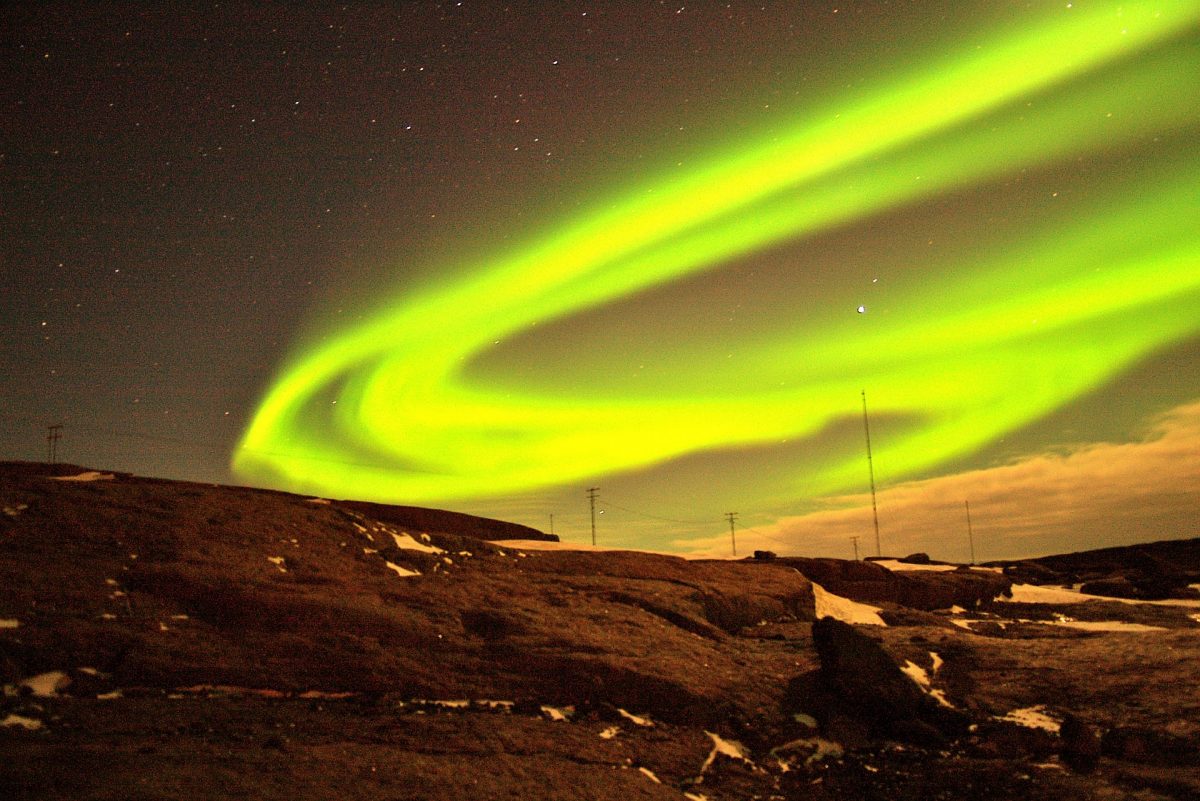 Photo by Siggy Nowak from Pixabay

Route 1 (Ring Road) allows you to access most top Icelandic spots for seeing the Northern Lights. The road is, in general, in good condition, even in winter.

While getting around, you will find campsites along the road. However, keep your tank full since some gas stations are up to 250km/155mi away from the next nearest. To keep yourself posted about the driving conditions, consult the weather forecast and web cameras on road.is.

If you are uncertain about the prospects of seeing the Aurora Borealis on your own or don’t have much time, join a guided tour. Experienced local professionals take the Northern Lights forecast, road conditions, and everything else into consideration to determine the likelihood of attending the show the heavens stage for us.

The multicoloured show of the Aurora Borealis depends on the height where charged particles collide with gaseous particles of our atmosphere. Pale-green, the most common colour, originates some 95km/60mi above our heads.

It is the result of the clash between the charged particles and oxygen molecules. When you see red colours, it involves oxygen up to 320km/200mi high. Finally, purple colours involve nitrogen. 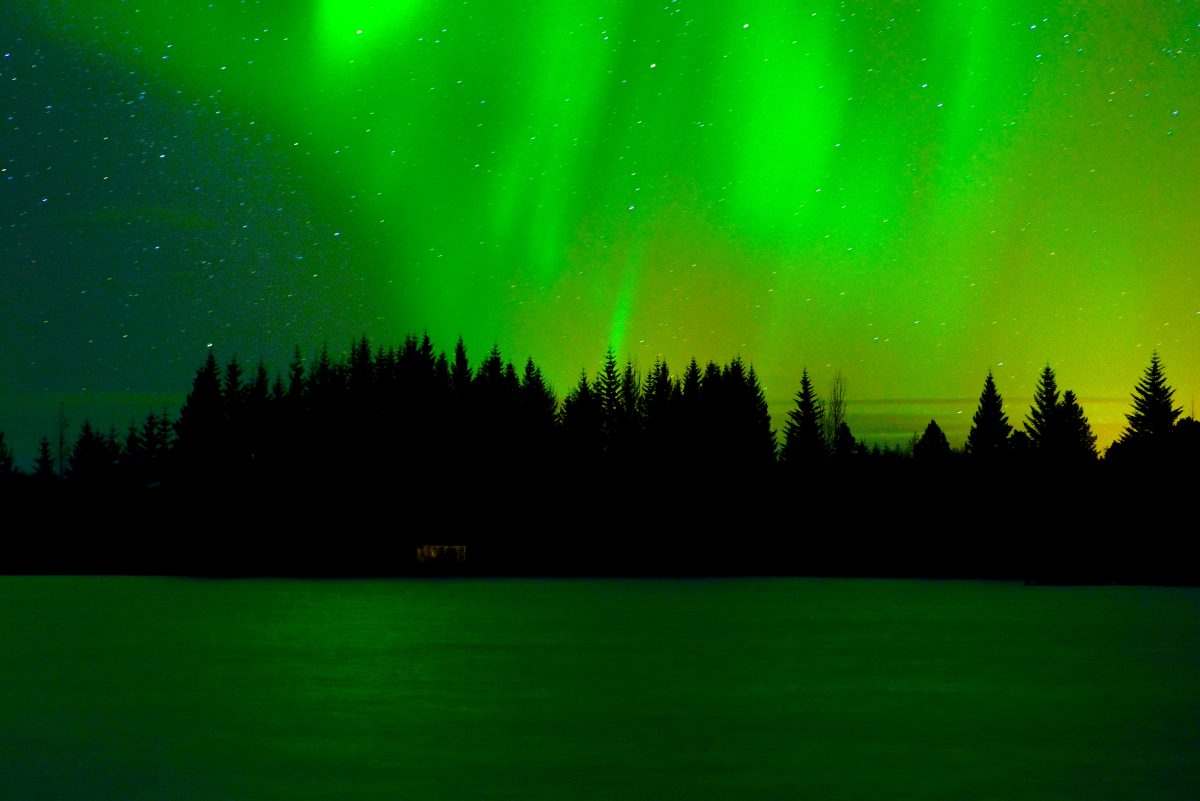 Photo by Kristjan Sverrisson from Unsplash

Supposing you don’t like the North, just wait a few hundreds of thousands of years to see the Northern Lights at the equator.

If you don’t have that much time, maybe there is a solution, although it is a long shot. Once in a while, the solar storm breaks out, bending the Earth’s magnetosphere.

As a result, the people of the 19th century were able to see the Aurora Borealis even if they lived at latitudes way south of the USA-Canadian border.

Maybe you have heard that the cold affects the Northern Lights display, but that isn’t true. In the north of Iceland, the nighttime darkness lasts about two hours longer than in the south, rendering you more likely to admire the Aurora Borealis.

Finally, Iceland weather is more favourable for observing the Northern Lights in the northeastern regions of Iceland than in the southwestern.

Take advantage of your time in Iceland to see what else the magnificent country has to offer!