For a change of pace when you’re on holiday in China, consider cruising down some of the longest rivers in China. Home to many stunning natural landscapes, the rivers in China are no exceptions.

Especially for outdoor and nature enthusiasts, why not voyage through the scenic waters and explore what the surroundings have to offer?

The best time to visit is during spring or autumn, in April, May, September, or October.  Summer time generally isn’t an ideal time to visit, even more so if you are hiking. The rainfall makes the terrain more dangerous, and there could be landslides too.

If you find yourself wondering what some of the longest rivers in China are, we’ve got you covered! Here are eight of them: 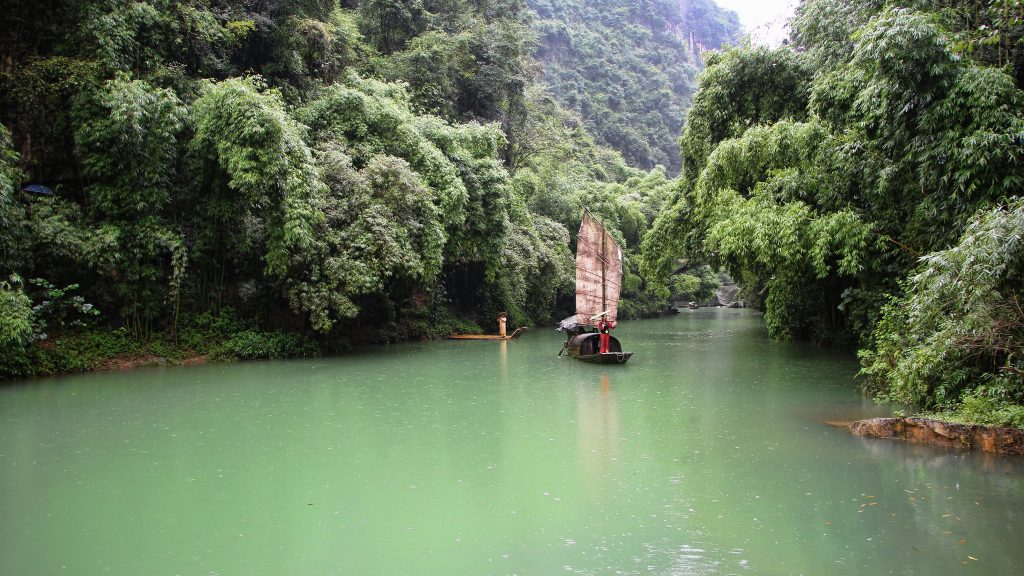 The famed Yangtze River is the longest river in China. It’s also the world’s third-longest river. At 6,300 kilometres long, the Yangtze River originates from Geladandong Mountain in eastern Tibet. It flows through several provinces in China, including Yunnan, Hunan, and Jiangxi before it empties into the East China Sea at Shanghai.

The river meanders through beautiful gorges, valleys, and mountains, and is also home to an elaborate ecosystem of flora and fauna. You can hop on a tour and take a cruise leisurely up or down the river between Chongqing and Yichang.

A trip along the Yangtze River isn’t over without visiting the world-famous Three Gorges – Xiling Gorge, Wu Gorge, and Qutang Gorge. Travel through this picturesque landscape in the comforts of your cruise, and you’ll be amazed by the mountains and peaks around you.

Located on a mountain downstream from Chongqing where the Three Gorges are, this “city” is a complex of shrines, temples, monasteries, and statues. This large historical complex features the Chinese culture of the afterlife which dates back to nearly two thousand years ago.

Combining beliefs of Confucianism, Taoism, and Buddhism, visiting the Fengdu Ghost City will definitely be an interesting experience. 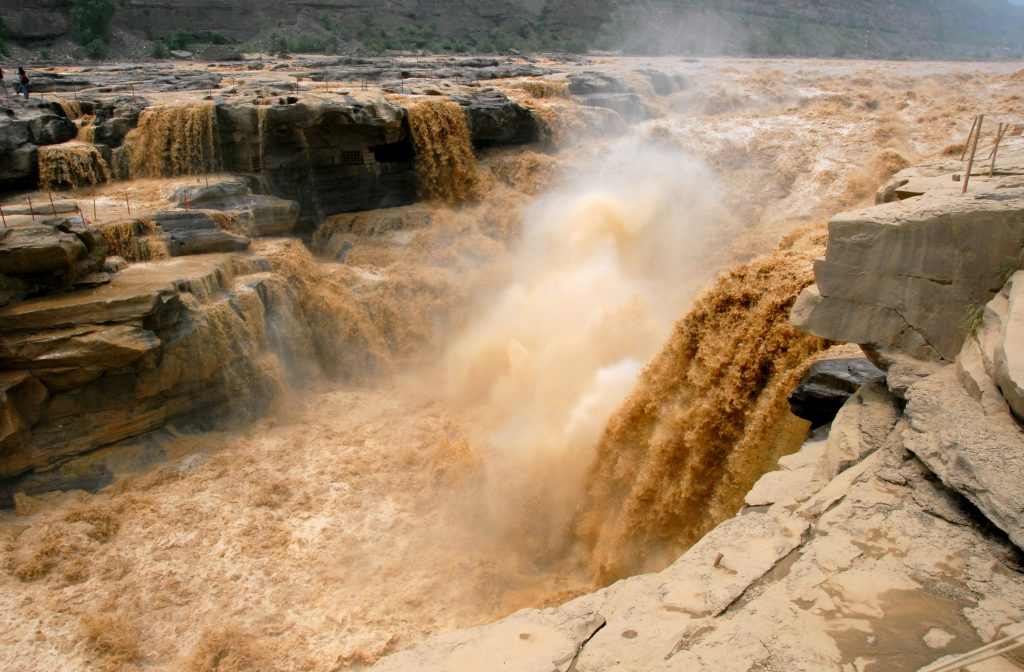 © Photo by Leruswing on Wikimedia Commons

Famous for its distinctive yellow-hued waters, the Yellow River, also known as Huanghe, is the second longest river in China. It boasts an estimated length of 5,464 kilometres. It originates from the Bayanhar Mountains in Qinghai province, passing through nine provinces before it exits into the Bohai Sea in Shandong province.

The river cuts through a mountainous upper course, winding through deep gorges and valleys, as well as through pastures and swamps. It then flows through the Ordos and Loess Plateau in the middle course, before reaching a low plain at its lower course.

There are several places you can stop along the three courses and take in the magnificent sight of the muddy river, as well as to explore the attractions nearby.

One of the key sights that you absolutely shouldn’t miss on the Yellow River is the Hukou Waterfall, the second largest waterfall in China. It’s located in the middle reaches of the Yellow River, in the intersection of Shanxi and Shaanxi province.

You can get up close and catch the sight of the majestic falls. Be impressed by the rush of water plunging from the cliffs, stirring up billows of smoke as it rains on the river. True to its name which means “mouth of a teapot”, the imagery is reminiscent of water being poured from a large teapot. 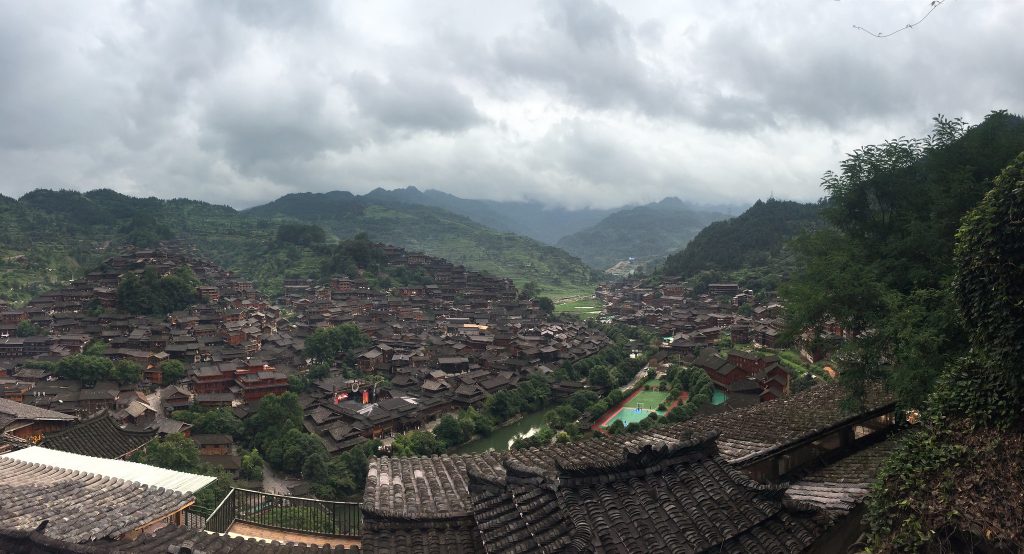 Xi River (Xijiang or Si Kiang) is the main western tributary of the Pearl River (Zhujiang River) in southern China. The headwaters of Xi River is from Nanpan River, and it flows from the Yunnan-Guizhou Plateau. It’s formed by the convergence of Gui and Xun Rivers in Wuzhou, Guangxi, before joining up in Guangzhou with the rest of the river tributaries that make up the Pearl River.

Xi River is the largest of all the tributaries of the Pearl River. It carries one of the largest volumes of discharge of all the rivers in China, and it passes by northern Vietnam as well.

It’s also one of the most important rivers in China due to its role in developing the economy and cities around it. The Xi River has made rice cultivation possible, and because of its abundance of freshwater fish, it allows for the commercialisation of fish. Furthermore, it forms an integral route to Hong Kong, Guangzhou, and Macau. The channel also links up with other cities on the delta.

You can visit the temple of Long Mu (Dragon’s Mother), the guardian of Xi River, which is located on the bank of the Gui River (Guijiang). A 38 metres tall statue of Long Mu stands with pride at the hilltop temple as the tallest of its kind in China. You will also be treated with an overarching view of the river from the top.

Furthermore, May 8th is the birth of Long Mu. If you’re interested in learning more about the local culture, it’s a great chance to visit during this time.

Besides the temple, the surrounding area is also known as the Arcade City of Wuzhou. Stepping foot onto the streets, you’ll be faced with preserved arcade buildings that will remind you of the past. It’s a place where you can also see the western influences in its architecture. The distinctive iron rings and watergates of the buildings’ second floors are characteristic and symbols of them being an arcade building. 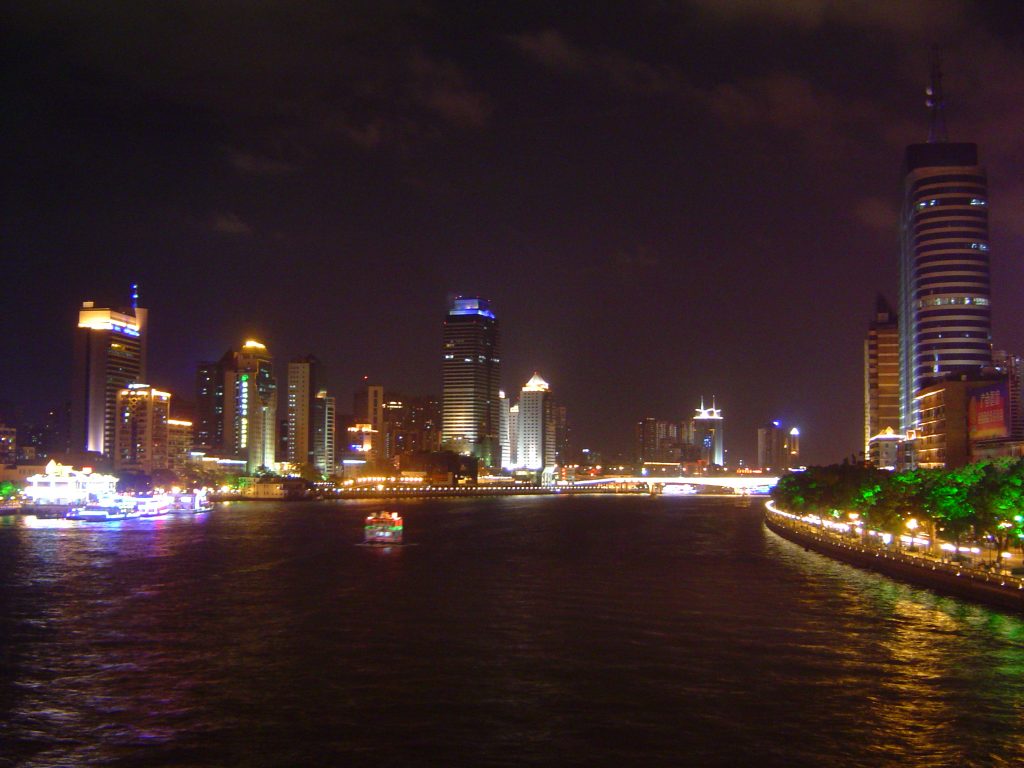 The Pearl River is the third-longest river in China, after the Yangtze and the Yellow River. With a length of around 2,400 kilometres, it mostly flows through China. Its three river systems – Xijiang, Beijiang, and Dongjiang – converge into the Pearl River Delta and leaves through its mouth where the South China Sea is.

Paddy fields and terraces also flank the sides of certain areas along the Pearl River, contributing to the rise in the country’s economy over the years. The river flows steadily along the modern city in Guangzhou and it’s also there where you can easily visit the famous Pearl River.

There are many options for a Pearl River cruise in Guangzhou. Alternatively, you can take a stroll down the riverside, basked in the night scenery. Decorated with bright lights from the bridges and city, it possesses an unrivaled night view with a colourfully lit up Canton Tower at its backdrop.

Many restaurants, cafes, and bars are also lined up along the riverbanks. You can always dine in the local cafes at night before taking a relaxed walk with your family or friends outside. While you can enjoy the Canton Tower light show from afar, it doesn’t hurt to go up the observatory deck during the day to enjoy a picturesque view of the entire city. 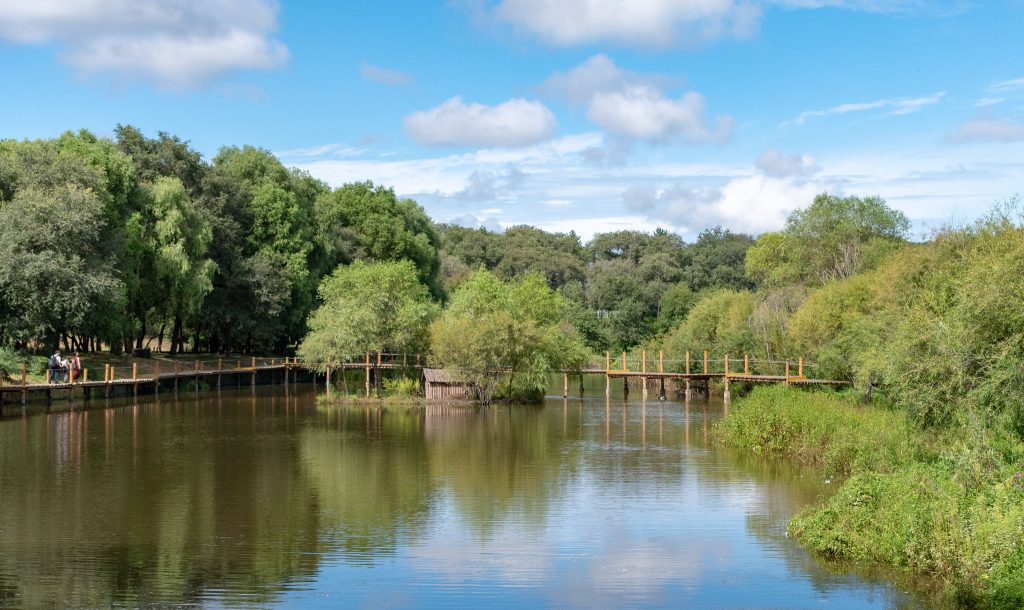 Also called Amur River, Heilongjiang River is dubbed the “Black Dragon River” for its shape that resembles a black dragon. The river flows from the northeast of China, marking the border between China and Russia, and it pours out into the Okhotsk Sea.

Although it flows through China, Russia, and Mongolia, most of it runs through China. It is also one of the longest rivers in China as well. Its total length is 4,370 kilometres, and it covers a diverse ecosystem over its wetlands, marshes, and grasslands. It’s rich in fish species, and Larches are the predominant plant living there.

Near the border of Russia, where Heilongjiang River flows through, lies China’s “Arctic Village” — Beiji Village. It’s located in Mohe county, in Heilongjiang province. It’s also known as China’s North Pole due to its subarctic climate during winter.

If you’re lucky, you can even see the Aurora Borealis in the village during the Summer Solstice. However, if you’re there during the winter, you can fully enjoy the snow and the Santa Claus theme park that’s 25 kilometres away from the village.

Also located in Mohe county, you can catch a glimpse of the breathtaking sight of Heilongjiang First Bay from the top of the mountain. Be prepared to climb a large number of steps up the mountain, but the beautiful view of the U-shaped bay is definitely worth the effort! Plus, you will be able to see a Russian island from atop. 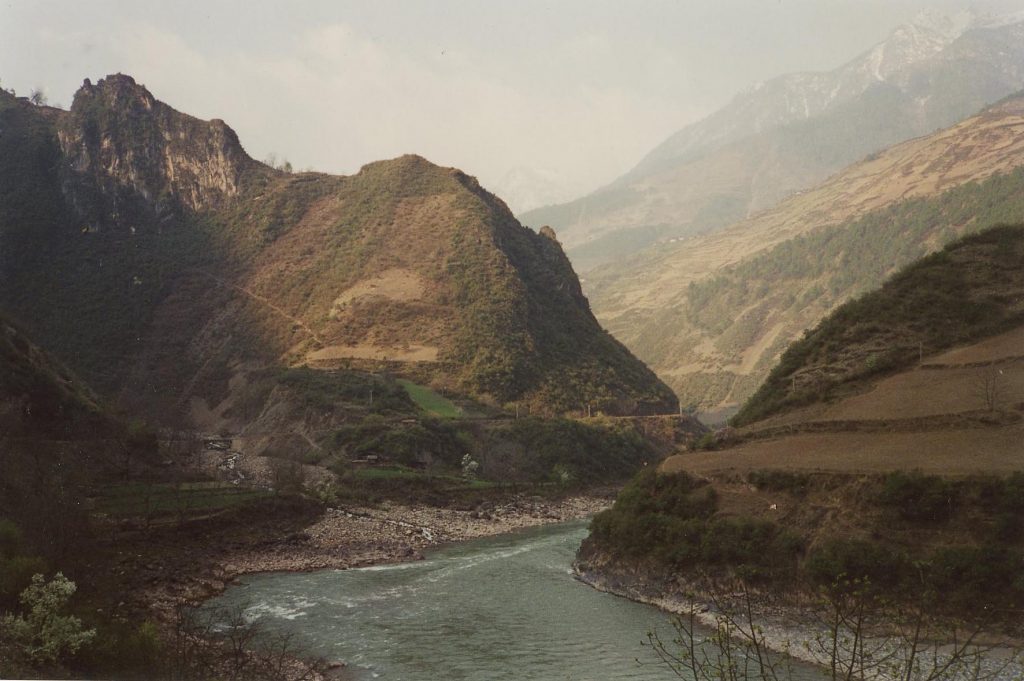 Lancang River is a huge part of the Mekong River that runs 4,350 kilometres through several countries in Southeast Asia.

The source of the river comes from the Tibetan Plateau. It passes through Qinghai, Tibet, and Yunnan before it flows out of China through Xishuangbanna in Yunnan. It finally drains out into the South China Sea via Thailand.

If you head out to Jinghong City in Xishuangbanna Dai Autonomous Prefecture, you will be greeted by the splendid sight of the vast Lancang River. Take a walk along the riverside and let yourself be soothed by its tranquil waters.

During April, you will get a chance to see the annual Water-Splashing Festival of the Dai ethnic group. It’s a three-day festival along the banks of the Lancang River – outdoor markets are held on the grounds, and the river will be beautifully lit up at night. While there, you’ll get to learn more about their culture and customs. 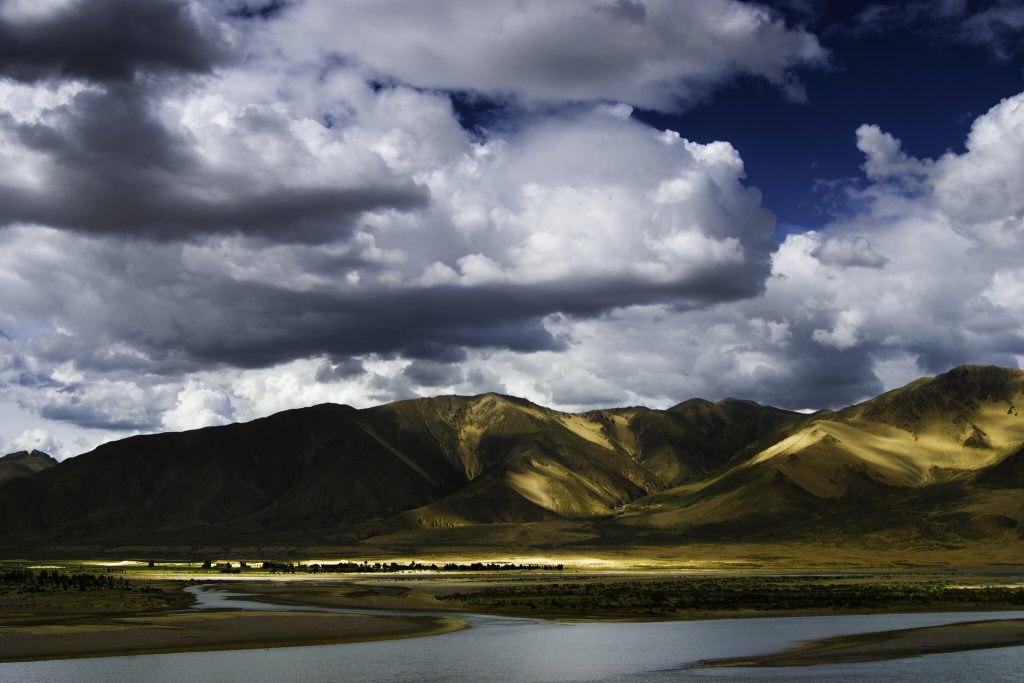 Among all the rivers in China, the Yarlung Tsangpo River holds the record of being found at the highest altitude in the world.

The source of the Yarlung Tsangpo River comes from the Himalayas in Tibet, winding through the Qinghai-Tibet Plateau and parts of China. It also passes through India and Bangladesh before it confluences at the Ganges River; it then finally funnels out into the Bay of Bengal.

The river is home to a unique and complex ecosystem of flora and fauna. Some areas are largely unexplored due to its dangerous terrains. However, all sorts of wildlife exist at this river due to its changing topography and climate along its long course.

A scenic spot that you shouldn’t miss on the Yarlung Tsangpo River is its great canyon. The Yarlung Tsangpo Grand Canyon is the largest and deepest canyon in the world. At its deepest, the canyon is estimated to be 6,009 metres in its depth.

It promises a spectacular view of deep valleys, high mountains, and turquoise streams. It’s a special sight that you will definitely remember for the rest of your life. The grand canyon is accessible by car from Bayi Town, a district of Nyingchi, in Tibet. 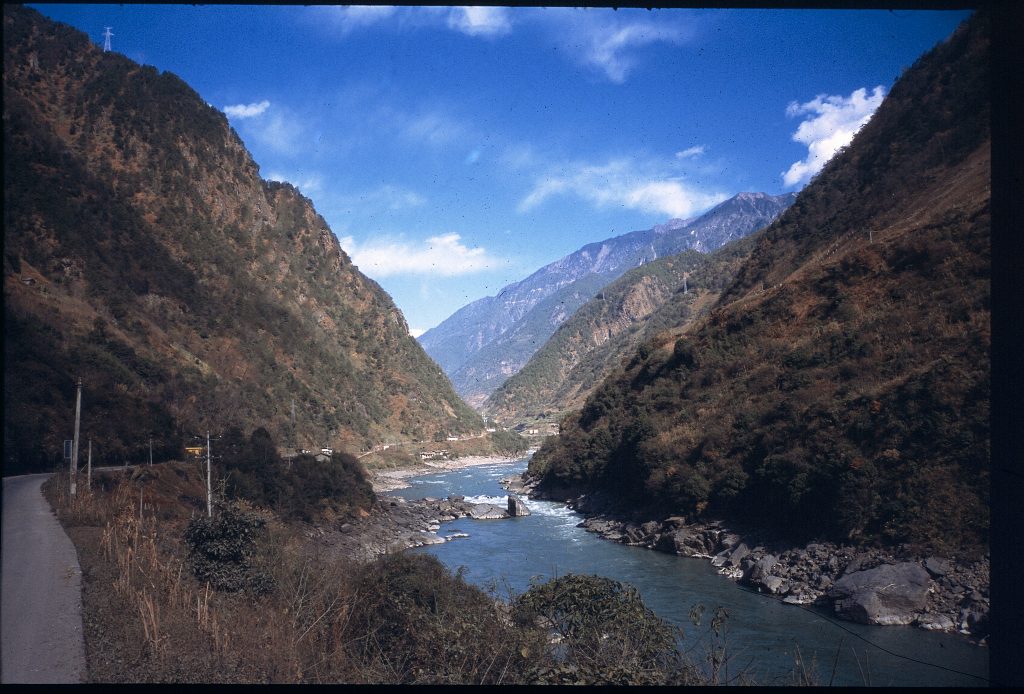 Better known as Nujiang (Nu River) in China, the Salween River is about 2,815 kilometres long. It begins in Tibet, runs through Yunnan and Myanmar, before it joins the Andaman Sea.

Nujiang River is much more hidden in comparison to the other rivers in China. Yet, its stunning landscape has garnered more attention recently. The river is characterised by its varying rapid and gentle currents, as well as its deep valleys. The Lisu, Drung and Nu ethnic minority with its rich culture and traditions live in the area harmoniously.

Take up the challenge and trek up the Nujiang Valley! The valley oversees one of the lesser-seen breathtaking rivers in China. Near the valley, you’ll also find yourself immersed and fascinated by the villages’ local traditions. Farms and greenery dot the landscape, and it’s also there that you can get a taste of Tibetan culture as well.

Try Exploring The Rivers In China

China holds all sorts of natural sceneries and national parks. However, no trip to China is complete until you experience and check out some of the longest rivers in China.