Known for its architecture, history, and culture, Bucharest is surely one of the most picturesque cities in this part of Europe. Every year millions of tourists visit the capital of Romania. If you ever wondered why here are some of the great things you can see and do while you’re in Bucharest. 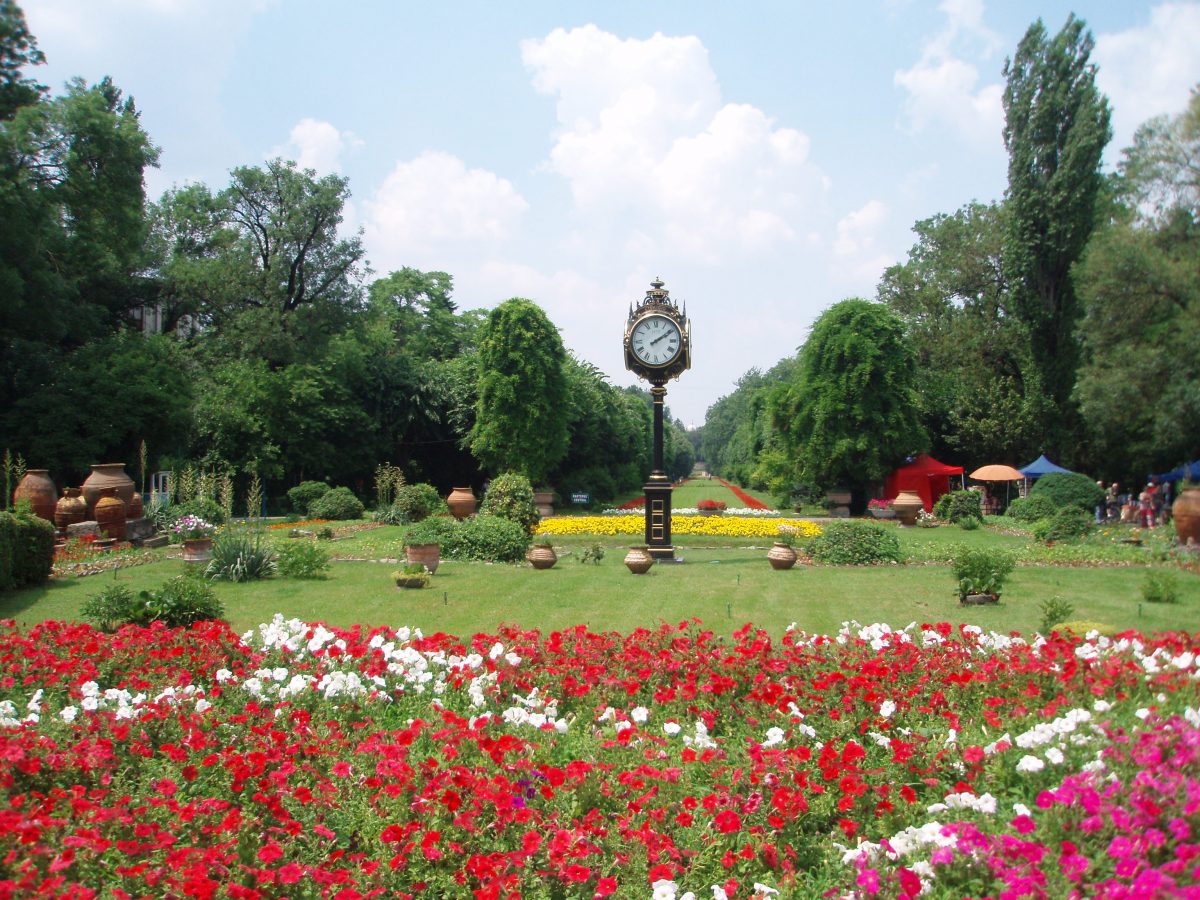 Photo by Mister No on Wikimedia Commons

In the heart of Bucharest lays the most beautiful and the largest public park in the whole of Romania, the Cismigiu Gardens. It is truly an iconic landmark that spreads on 17 acres of land which dates since the late 18th century.

Perfectly placed in the sole center of the city, it is accessible through several entrances. This garden also has an artificial lake and visitors can rent boats and sail on it. With such beautiful flowers, lush greenery, many small bridges and a lot of playgrounds for children, Cismigiu Gardens is the ideal gateway for family excursions and romantic honeymoons. 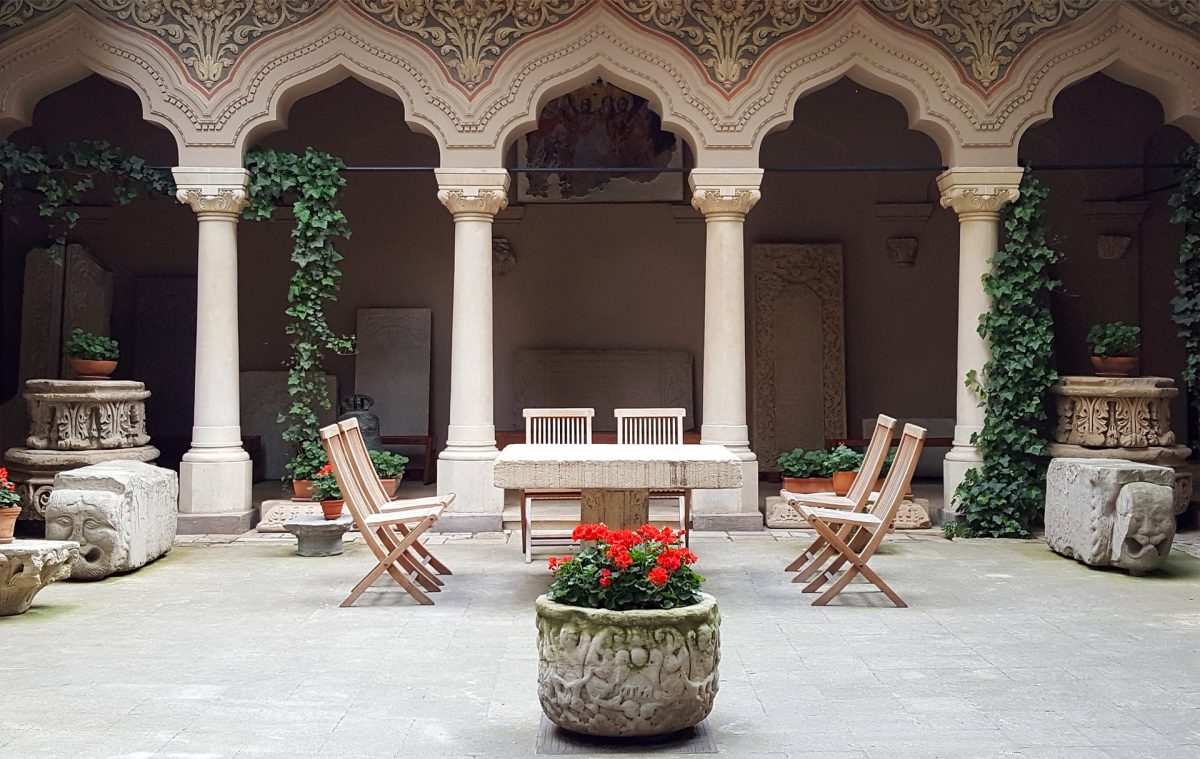 Photo by V S on Pixabay

Also known as a Stavropoleos Church, the Stavropoleos Monastery is an architectural marvel. It’s located in the oldest part of Bucharest in the middle of the Old Town.

Founded in 1724 by the Greek monk Ionichie, this small Orthodox church built in the Brâncovenesc style, is something you must visit while in Bucharest. It is easily accessible and we would strongly recommend attending the mass to feel the peace and serenity around this place. Here you can find some of the most beautiful frescoes and stone-carved decorations. There is also a collection of the old icons and ecclesiastical objects as well as the old library with more than 8,000 books. 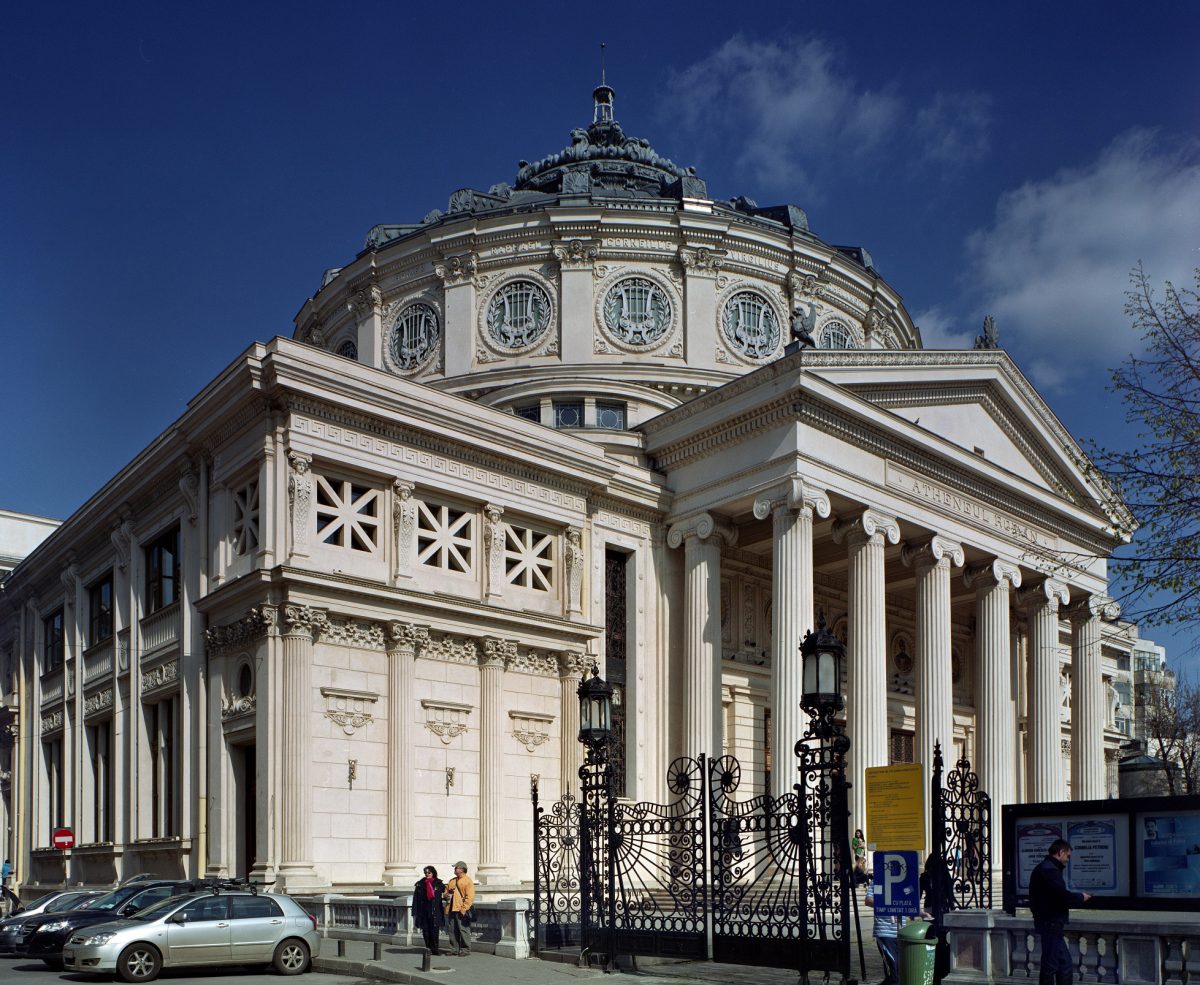 If good music is what you seek during your trip to Bucharest, then you should not miss visiting the Romanian Athenaeum. Built in 1888, this concert hall is the center of Romanian classical music and is the home of the George Enescu Philharmonic Orchestra.

On the first floor, inside the Big Hall, with the dome 41 meters high, you will find yourself mesmerised with the luscious décor and the beautiful frescoes. The concert hall is also famous for its world-known acoustics and you’re welcome to spectate. On a week that a concert is taking place, the box office is open from 12 pm to 7 pm from Tuesdays to Saturdays, and from 4 pm to 7 pm on Sundays. The Romanian Athenaeum closes on Mondays. 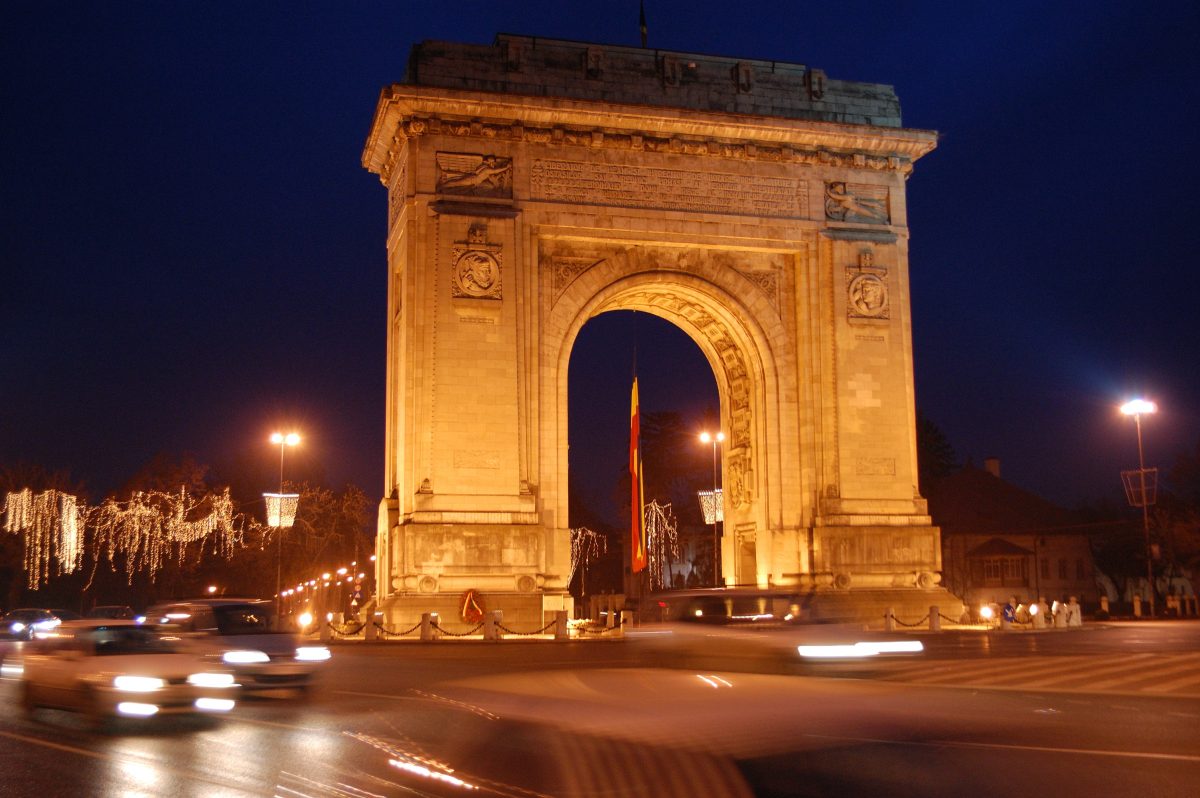 Photo by Mihdragan on Wikimedia Commons

Placed in the north part of Bucharest, the Triumphal Arc was first built in 1878 as a symbol of Romanian independence. The first Arc was made of wood. A new Arc was built, based on a design by Petre Antonescu, with a new Neo-classical style in 1935 thus replacing the old arc.

The Arc is 25 meters high and the visitors can climb to the terrace using the staircase. On the façade, you can see the sculptures that were made by some of Romania’s most famous sculptors. 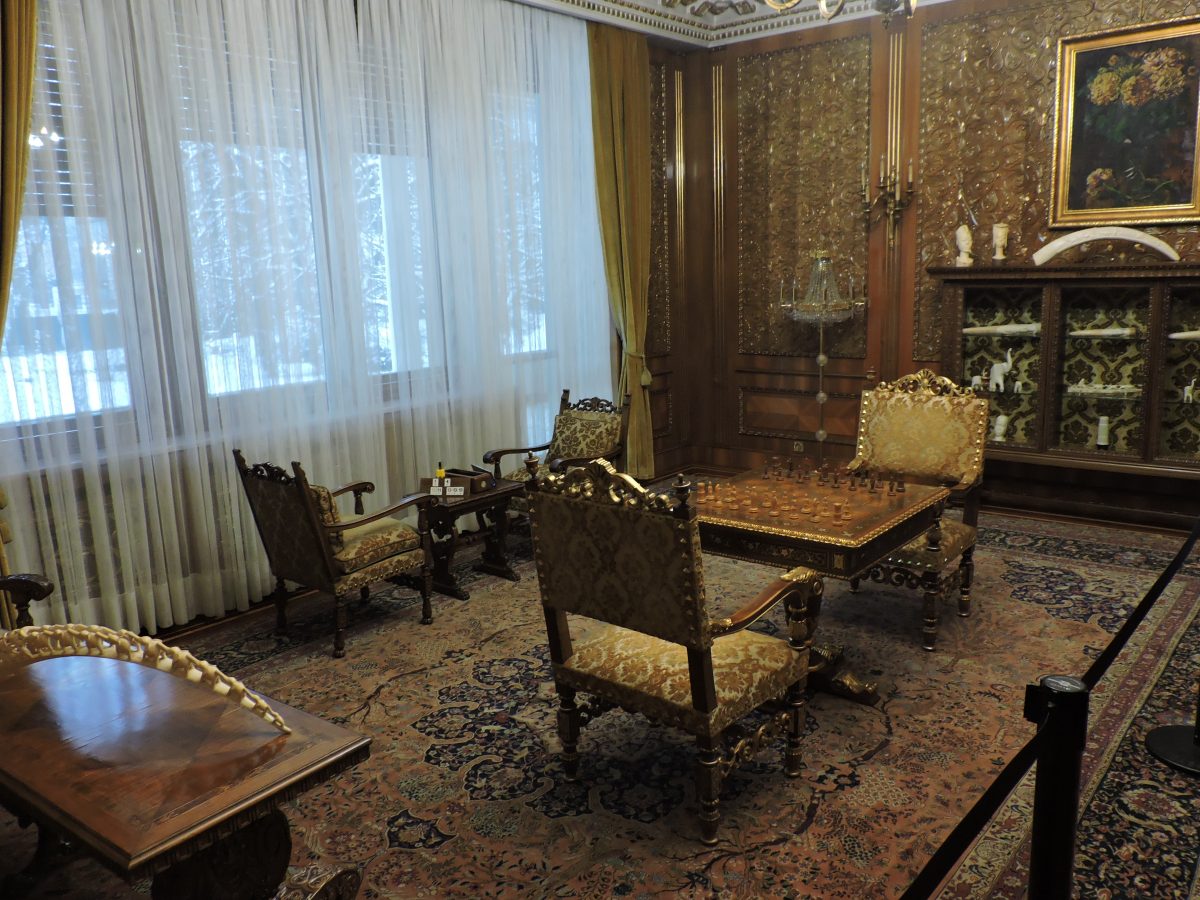 The Primaverii Palace was the home of former Romanian president, Nicolae Ceausescu. This is a relatively new attraction for tourists, as it was opened as a museum after being renovated in 2016. The Spring Palace, as it is known in English, was built in the mid-60s. It sits on 14,800 square meters of land in the richest part of Bucharest located in the north of the city.

The palace has 80 rooms that are decorated with silk wallpaper, expensive furniture, and some of the most famous paintings. There’s also a large courtyard, swimming pool, cinema, wine cellar and many luxurious bathrooms. The water taps in the bathrooms are made of gold hence the nickname, The Golden Palace.

The Primaverii Palace is opened for visitors from Tuesdays to Sundays from 10 am to 6 pm. Tickets cost 35 Romanian Leu or US$8.25.

The Great Synagogue of Bucharest 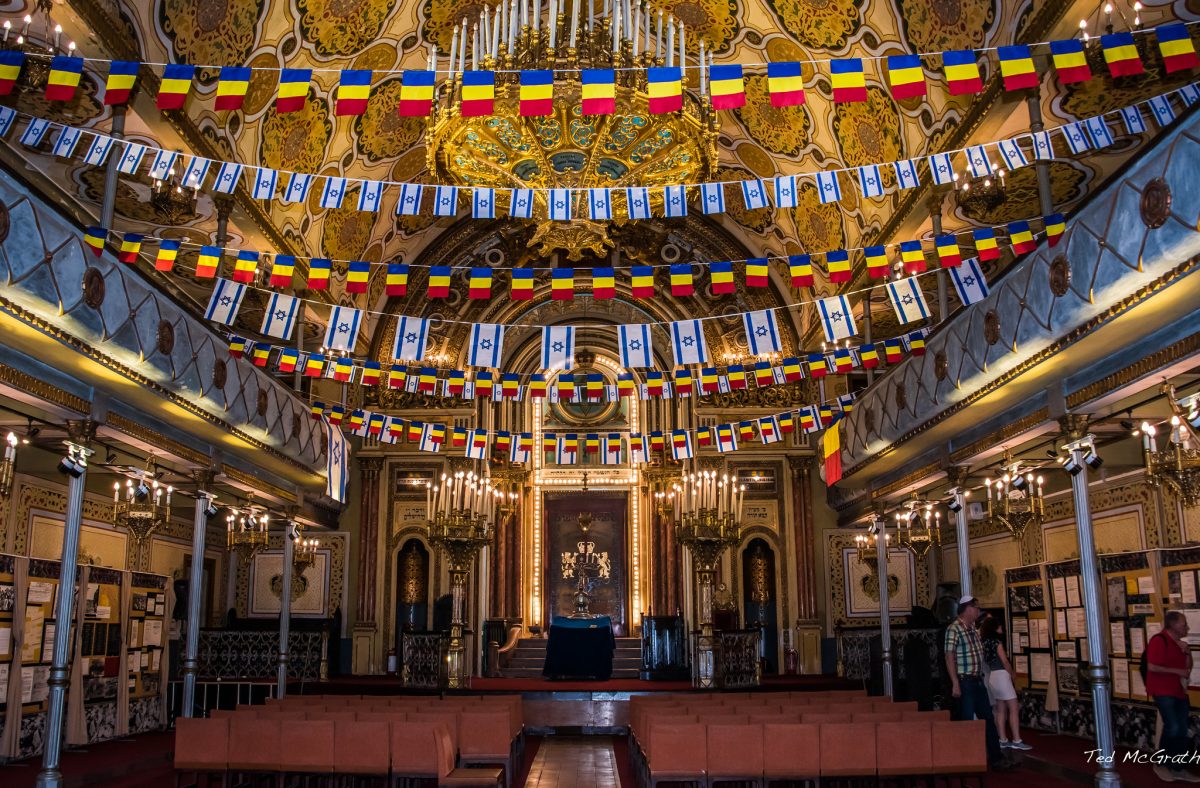 In 1845, Romania’s Polish-Jewish community established the Great Synagogue of Bucharest. It is a great place to learn more about Jewish culture and the history of Jews in Romania. It’s located on the south border of the Old Town Bucharest.

The Synagogue is definitely worth the visit despite being surrounded by public housing blocks which makes it difficult to find. Once inside, you will be able to see and enjoy its impeccable interior. Today it hosts an exhibition named The Memorial of Jewish Martyrs “Chief Rabbi Dr. Mozes Rosen”, but it also still hosts religious services on weekends.

The synagogue is open on Mondays to Thursdays from 9 am to 3 pm, Fridays and Sundays from 9 am to 1 pm and it closes on Saturdays. It’s free for everyone, which means that there is no reason not to visit it. 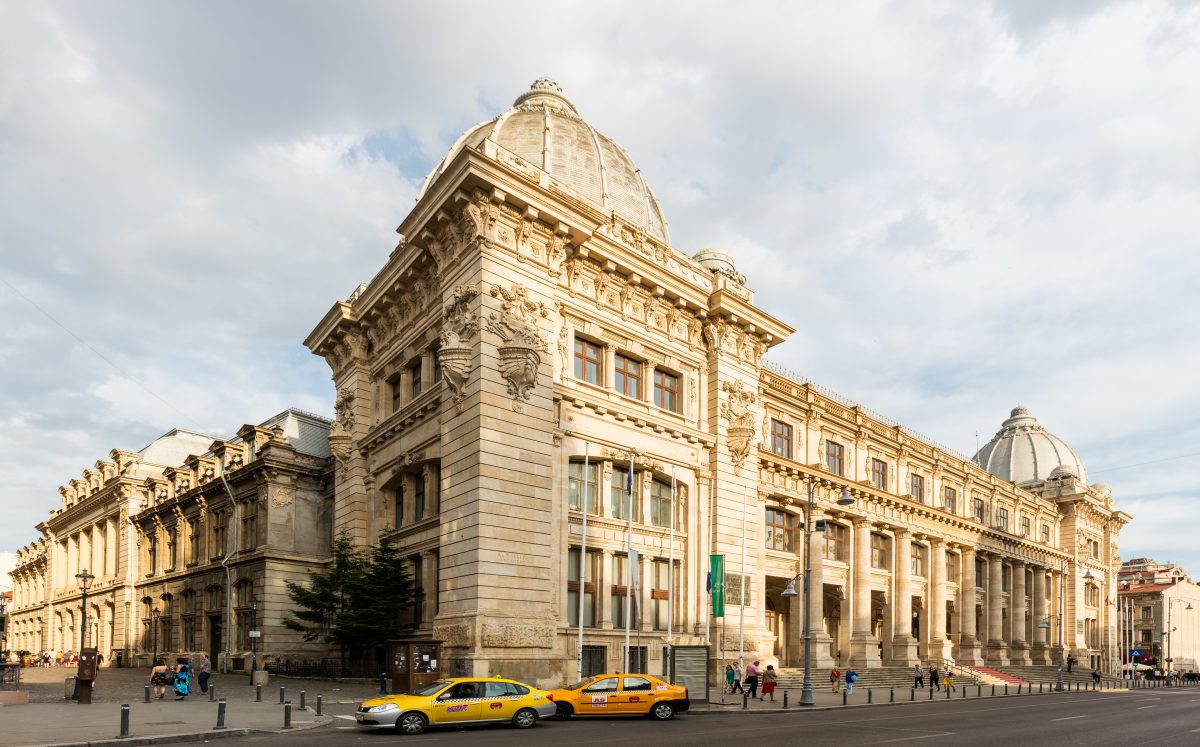 The National Museum of Romanian History is a great place for everyone who wants to learn and find out more about Romanian history and culture. It was originally the site of the Postal Services Palace which also included a philatelic museum. In 1972, the building became a fully functioning history museum.

In more than 60 exhibition rooms, you can find more than 650,000 pieces of various collections such as pottery, manuscripts, philately, jewels and weapons.  There are currently two permanent exhibitions: The Historical Treasure and the Lapidarium-The Copy of Trajan’s Column. If ancient civilizations are something that interests you then this is the place for you. The museum has more than 3,000 pieces made of metal and stone from different periods displayed as part of the Historical Treasure exhibit.

Opening hours are from Wednesdays to Sundays from 10 am to 6 pm. Admission price for adults is US$5.90, US$3.54 for seniors and US$1.65 for students and children. 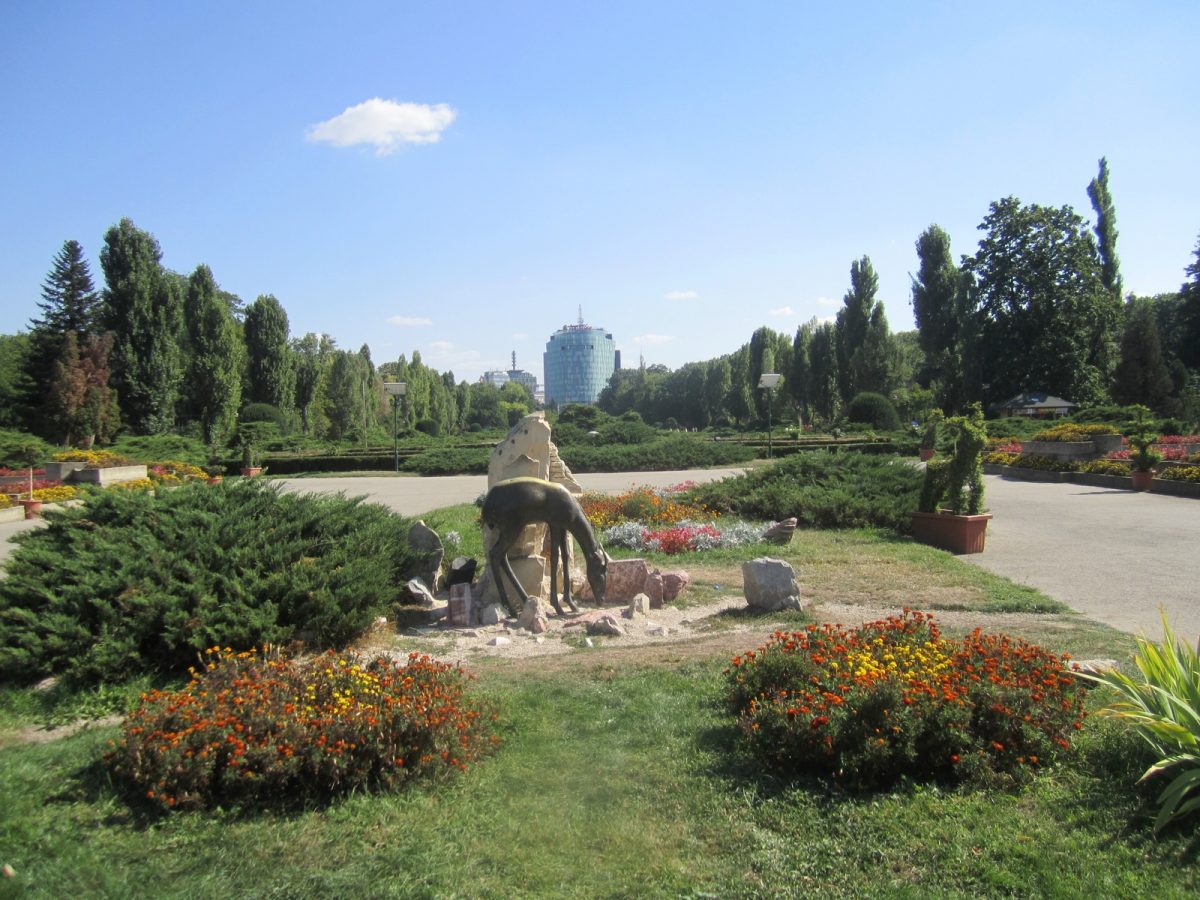 Photo by Crislia on Wikimedia Commons

Formerly known as the Herastrau park, King Michael I Park is one of the most visited parks in the country. The park has two zones sitting on 187 hectares of land with the lake Herastrau covering 74 hectares. The first zone is the ”Dimitrie Gusti” National Village Museum, while the second is the public park that’s open for everyone.

The public park has a lot of cafes and restaurants near the shore of the lake. During summer, there is an open theatre as well as flower exhibitions and many sporting activities available. In other words, it is an ideal place to spend time with the family.

After a few days of exploring Bucharest, you will need a place to relax and recharge your batteries. There is no better place to do so than the largest recreational, wellness, and indoor entertainment center in Europe.

Located approximately 35km north from Bucharest city center, with a 10-minute drive from it, Therme Bucharest is an oasis of relaxation. The place is divided into three areas. The first is the Palm Area which features 9 thermal indoor and outdoor pools. The second is the Elysium area which has four wet saunas. The third is the Galaxy area which contains 16 waterslides. And if this isn’t enough, Therme Bucharest has more than 800,000 plants making it the largest botanical garden in Romania. Water temperature in all pools is 33°C all year round. 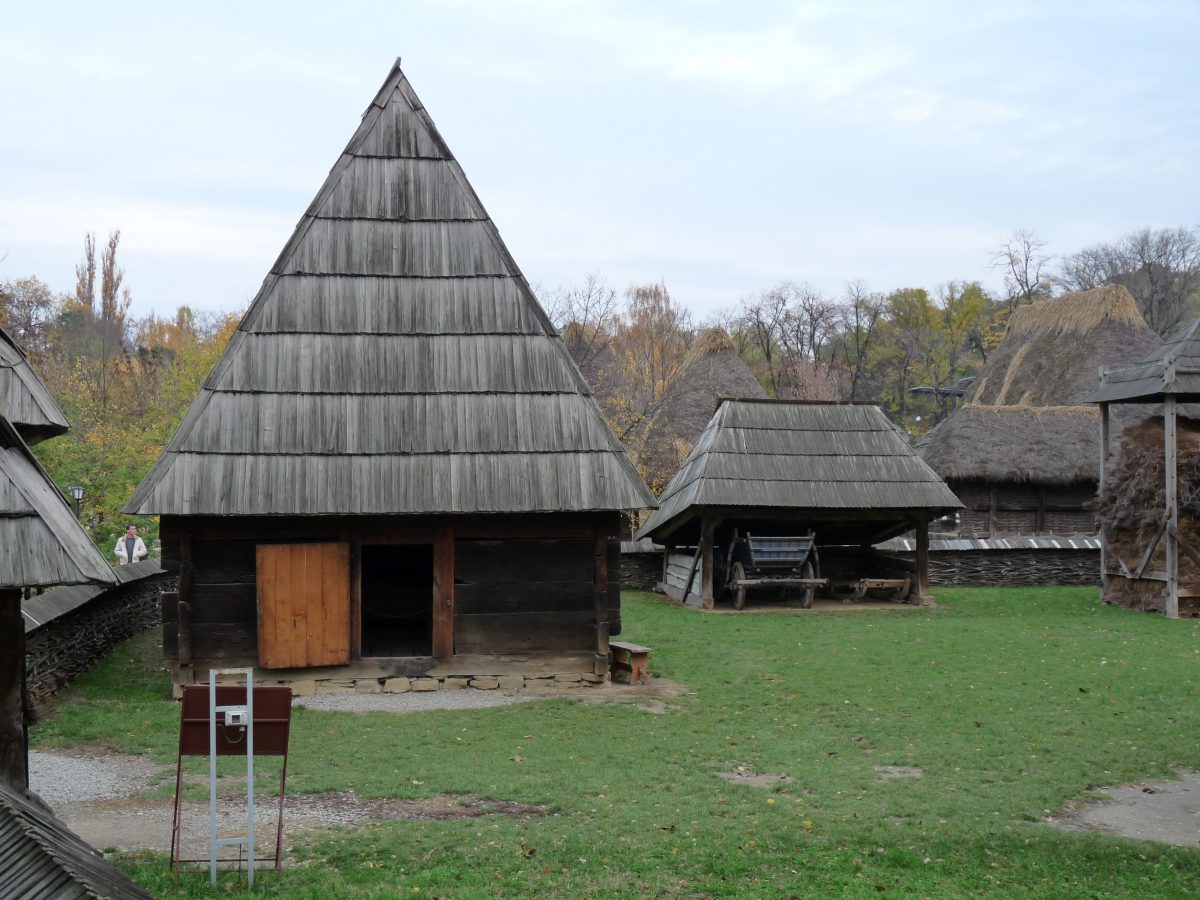 Placed on 100,000 square meters of land, the ”Dimitrie Gusti” National Village Museum is the largest open-air museum in the Balkans. If you ever wondered what is like living in a traditional Romanian village with all its farms and houses, this is where you can find out.

With 272 authentic peasant houses, farms, windmills, watermills and churches, this museum represents a glance into the past. Everything was built with materials that were used during medieval times which just add to the authenticity.

Opening hours are on Mondays from 9 am to 5 pm, and on Tuesdays to Sundays from 9 am to 7 pm. The museum is easily accessible by tramway, bus or subway. Admission for adults is US$3.54, US$1.89 for seniors and US$0.94 for students. Additionally, admissions are free for veterans, peoples with disabilities and children in preschool. 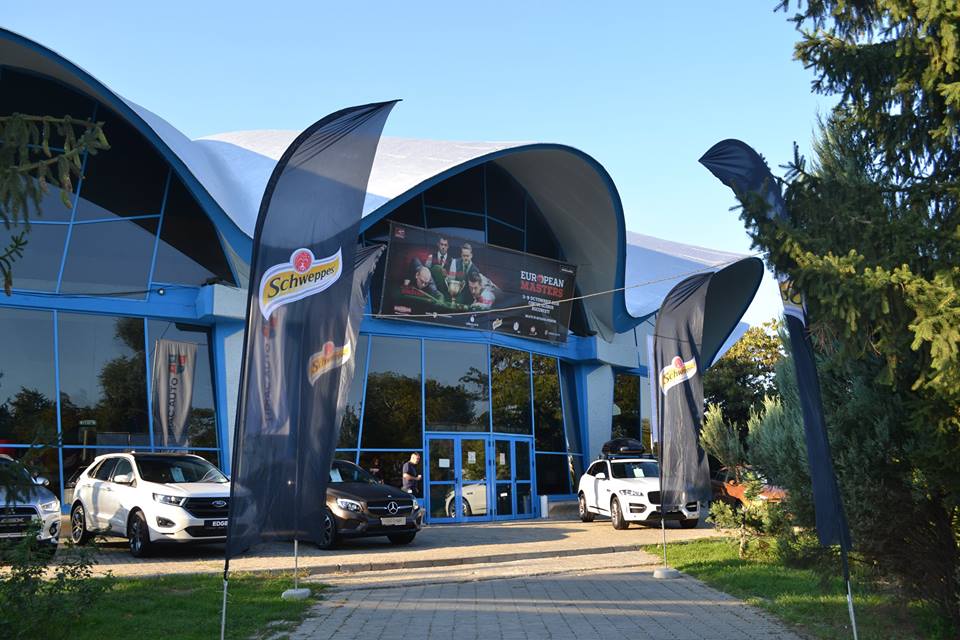 Photo by Crisreece on Wikimedia Commons

One place that is a must to visit in Bucharest is the Metropolitan Circus, also known as the Globus Circus. Founded in 1960, this enormous circus is set under a big top. Here spectators can enjoy performances of local and touring circuses. Their shows are very amusing and some of the world’s best acrobats have performed here. It has a capacity for 3,500 people and many concerts and musicals also took place here. 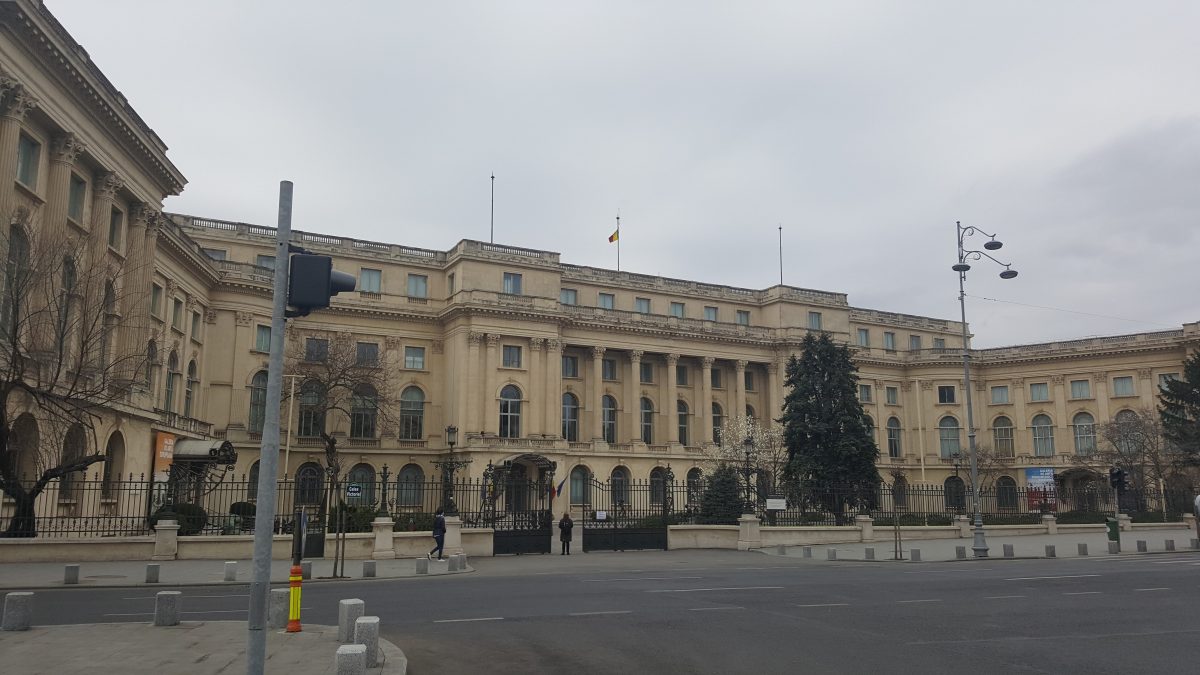 Photo by Daniel on Pexels

This majestic Neo-Classical building, built in the 19th century, was home to the last kings of Romania. In 1834, Prince Alexandru Ghica declared the building as a royal residence.

Today, it is home to the National Art Museum and it houses two permanent galleries. One gallery is dedicated to National Art while the other is for the Art of European Masters. The European Gallery features masterpieces and less known pieces of Rembrandt, Renoir, El Greco and Ruben. The National Gallery has pieces of all major Romanian artists and it has a very strong collection of medieval art, dating back to the 15th century. The former Royal Palace itself is amazing and there are guided tours to the rest of the building that are not part of the National Art Museum.

You can enjoy this wonderful collection of art from Wednesdays to Sundays from 10 am to 6 pm. Admission for adults is US$3.54 and there is a 75% discount for students and a 50% discount for seniors. Admission is free for children under 7 years old and people with disabilities. Additionally, it’s free for everyone on the first Wednesday of the month. 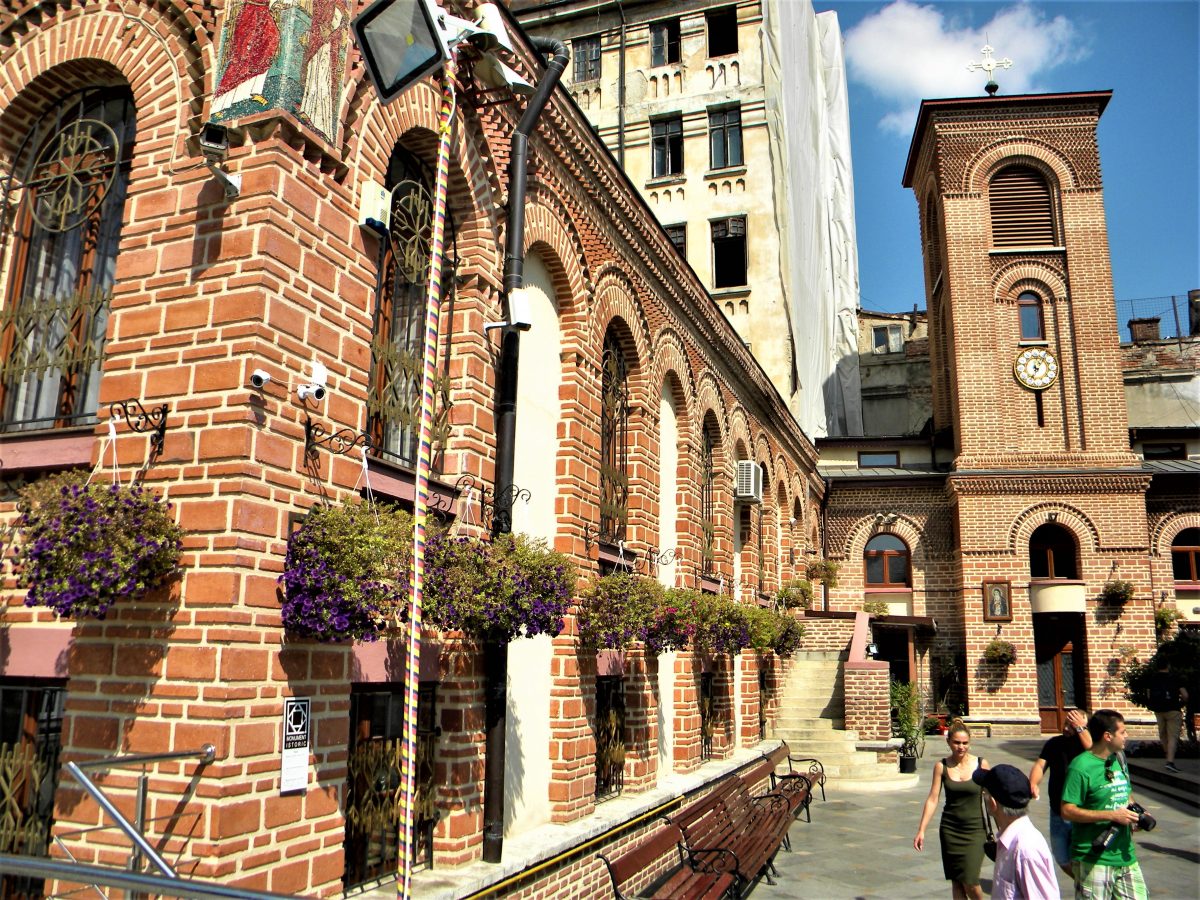 The Old Princely Court Museum (Curtea Veche) was established in the 15th century by the notorious ruler Vlad the impaler as a residence for Wallachian rulers and it is the most iconic place in Romania.

Often overlooked by tourists since it is placed in the overwhelming Old Town, this monument still sits in its original location for 500 years. The place itself was once protected by a moat. Here you can stand in an open-air courtyard and see the old tombstones as well as a picturesque statue of Vlad Dracula.

Opening hours are from 10 am to 6 pm on Tuesdays to Fridays. 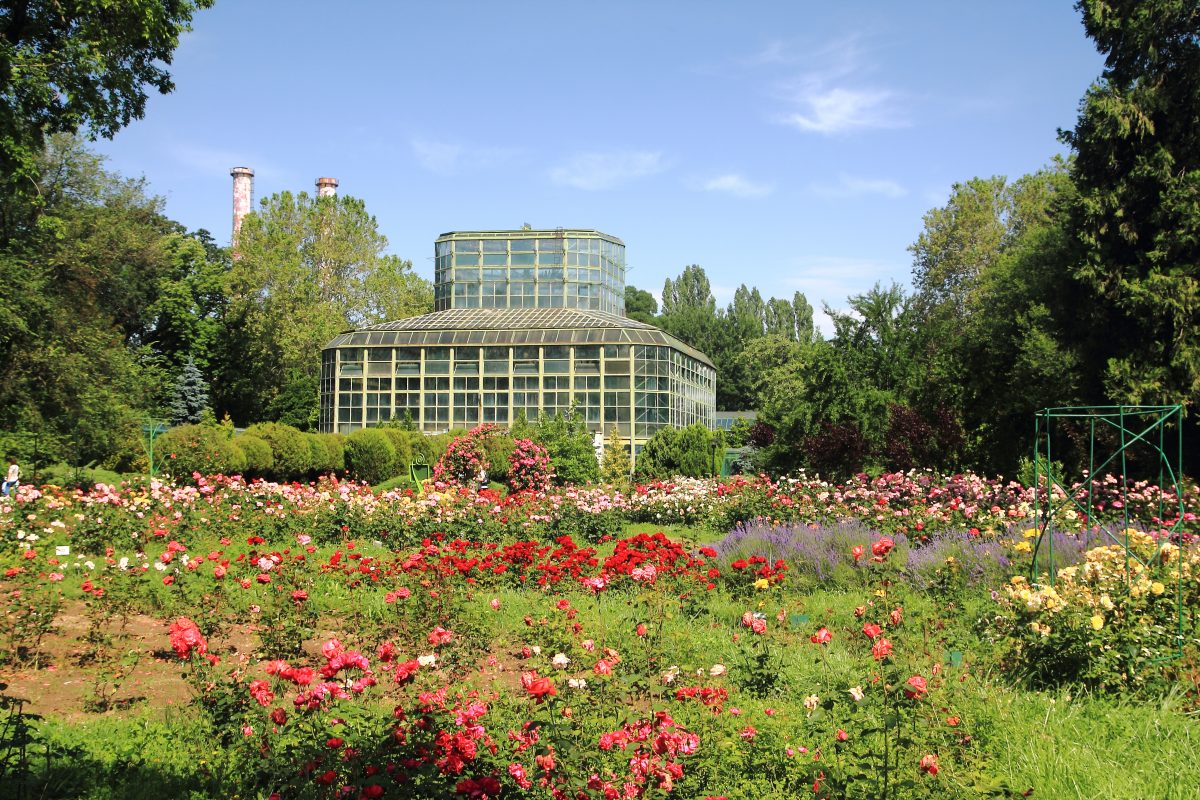 This botanical garden was founded in 1860, and it’s under the ownership of the University of Bucharest since 1874. It’s located on Cotroceni street, on the surface of 18 hectares of land. The garden is divided into two specific sectors, the exterior, and the interior sector. In the last few years, two more sectors, the Grandma’s and Children’s Garden sectors, were added.

The Dimitrie Brândză Botanical Garden contains more than 300,000 specimens. In addition, the Botanical Museum, located within the garden, hosts more than 1,500 paintings of plants cultivated in Romania.

It is open for visitors every day from 8 am to 8 pm during the summer and from 8 pm to 6 pm during the winter. Admission for adults is $US1.18 and US$0.47 for children, students, and seniors.

Palace of the Parliament 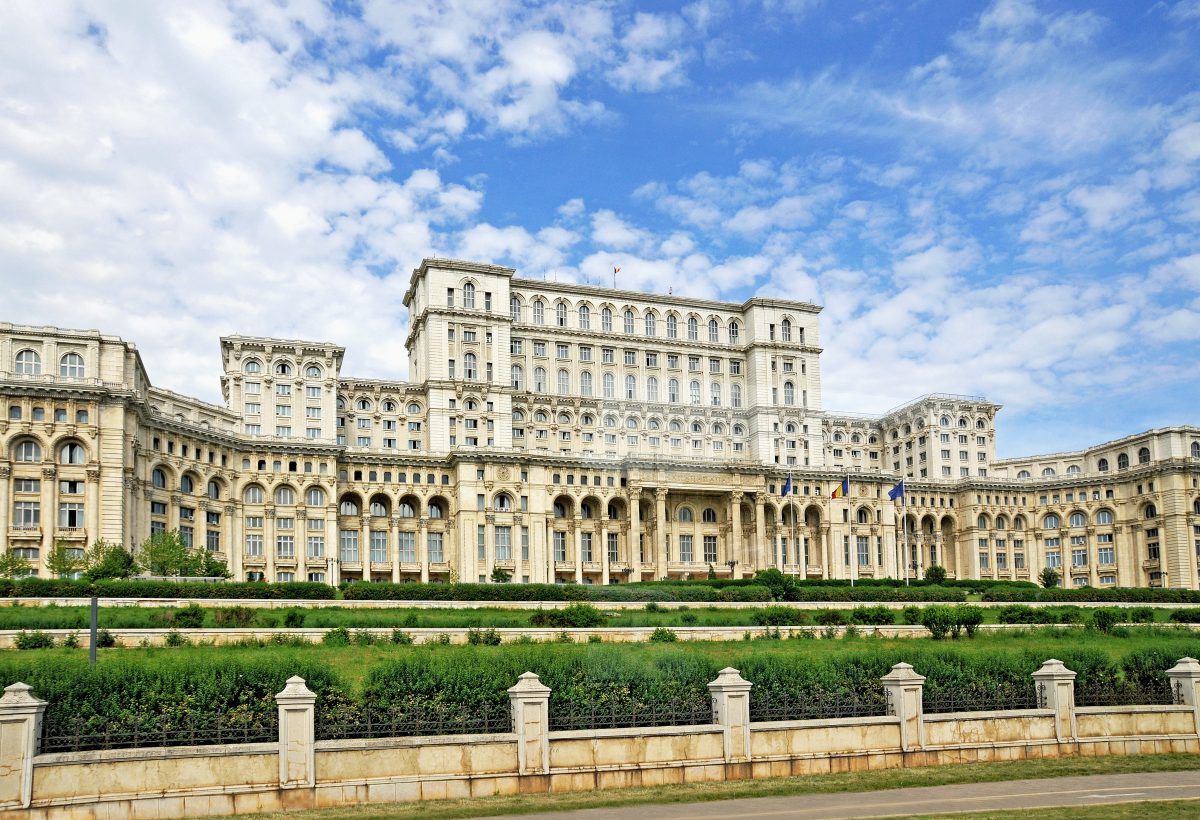 Frequently referred to as the “People’s House”, this magnificent building is the second-largest administrative building in the world. It stretches on 365,000 square meters and it goes up to 86 meters in height. Its construction started in 1984 and although it is still unfinished, this gracious building is open for tourists.

With over 3,000 luxury decorated rooms, the Palace of the Parliament has something to offer to everyone. One wing of the Palace houses the National Museum of Contemporary Art and if you have time you should certainly explore it. 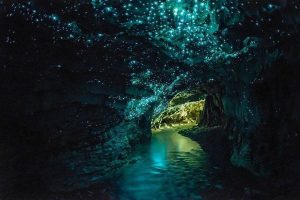 5 Hidden Caves To Spot Glow Worms In New Zealand
Prev: Best Things to Do... Next: 5 Reasons To Stay...

12 Best Things To Do In Brookings, Oregon

Things To Do In Valencia, Spain