Getting closer to marine life is the dream of every diver. It gets even better when you get to swim along with some fascinating sea creatures. One of the best experiences of diving is along with the majestic creatures, Manta Rays. These massive creatures somersaulting under the sea can be a sight to see.

If you are looking for a one in a lifetime experience of diving along with the manta rays, here are ten best diving spots that you can visit around the world.

What Are Manta Rays? 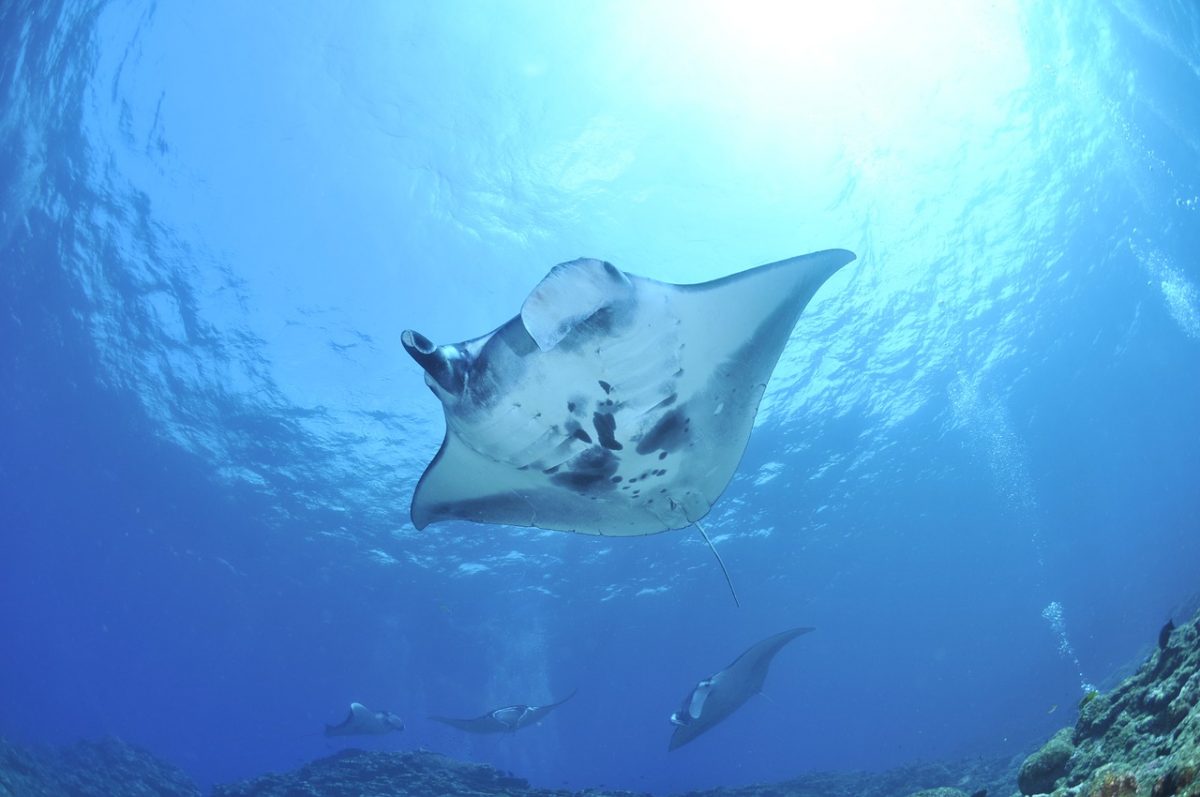 © Photo by Masako Uchida on Pixabay

Manta Rays are giant sea creatures that belong to the shark and ray family. They can grow in size up to 23 ft and can weigh over two tonnes in some cases. Even though these creatures are large, they do not harm the divers. Most of their foods include planktons from the surface of the sea.

While diving, it is easy to spot these creatures in the water surface. Manta rays have one of the giant brains amongst its other marine counterparts, and this is the reason that they are friendly towards the scuba divers. There are mainly two kinds of Manta Rays one can spot. The Giant Oceanic Manta can only be sighted in the productive coastline, and the Manta Alfredi or reef Manta can be spotted in the shallow coasts and is also the most common kind of Manta.

Best Spots Where You Can Dive With Manta Rays 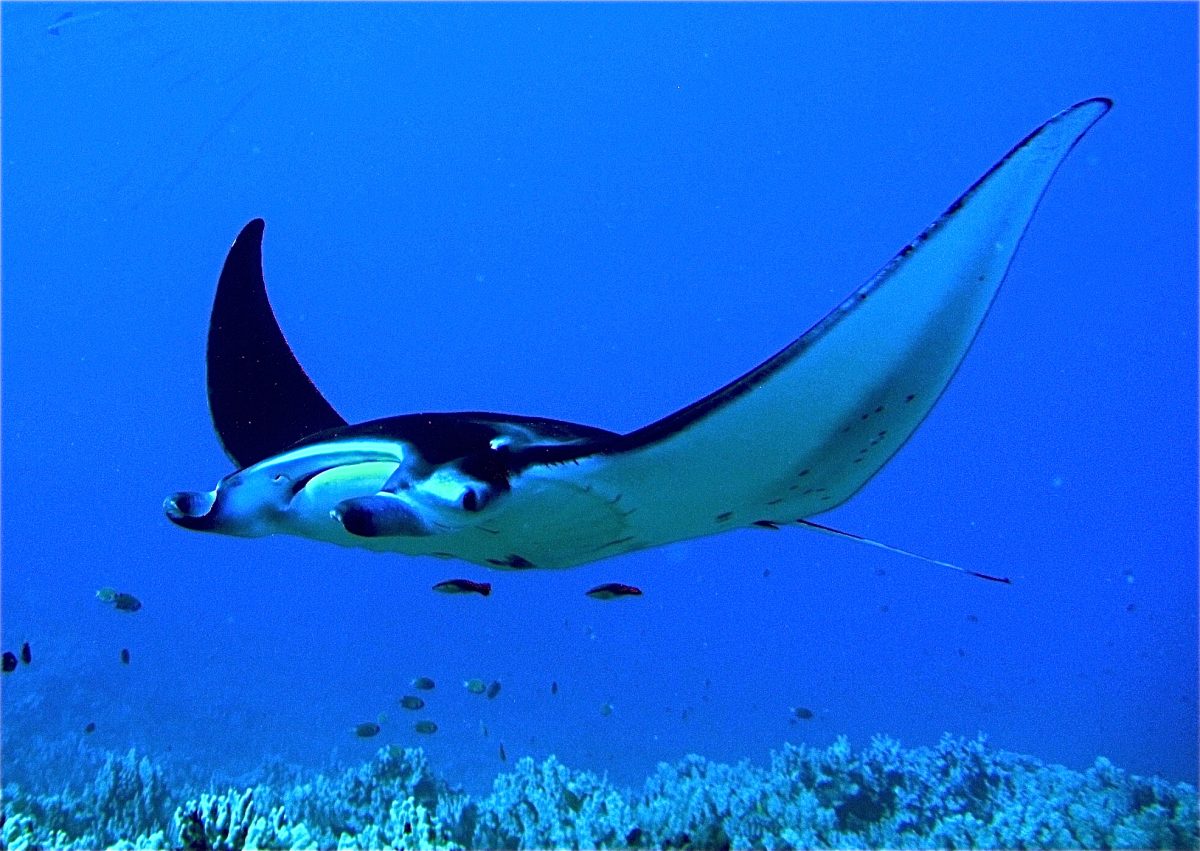 Hawaii is one of the most famous diving destinations in the world. Kona in Hawaii is the best place for the divers to spot manta rays all year round. There are special night dives organized for the enthusiasts where they are given flashlights to attract the planktons. The manta ray feeds on these planktons and will make a beeline towards you. This can be one of the most exciting experiences to have. 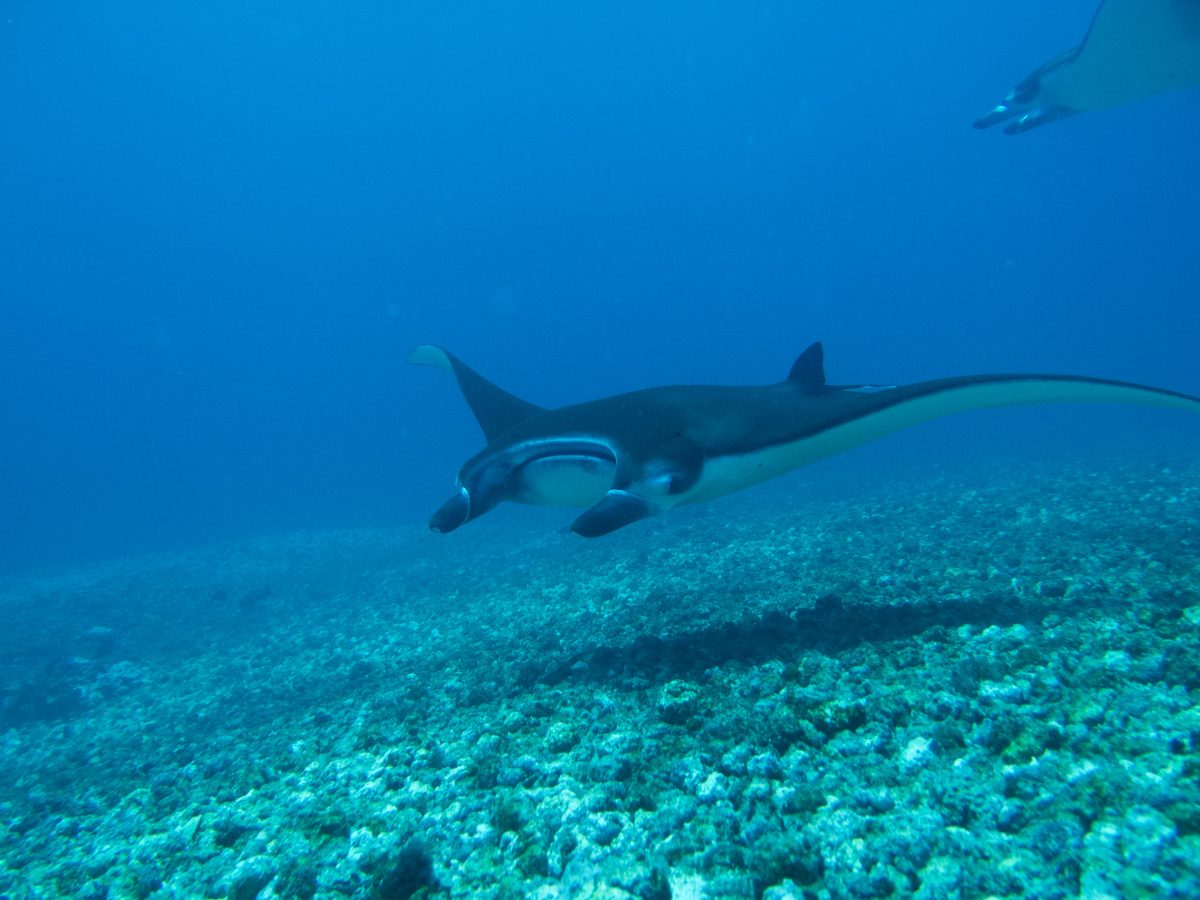 Komodo is one of the best places in Indonesia to go diving with the manta rays. When you go diving in Komodo National Park, it is a guarantee that you will spot a manta ray no matter what time of the year. You can visit either of the dive centres and get a package for your diving trips. They will tell you the exact spots where you can dive and play along with the manta rays. 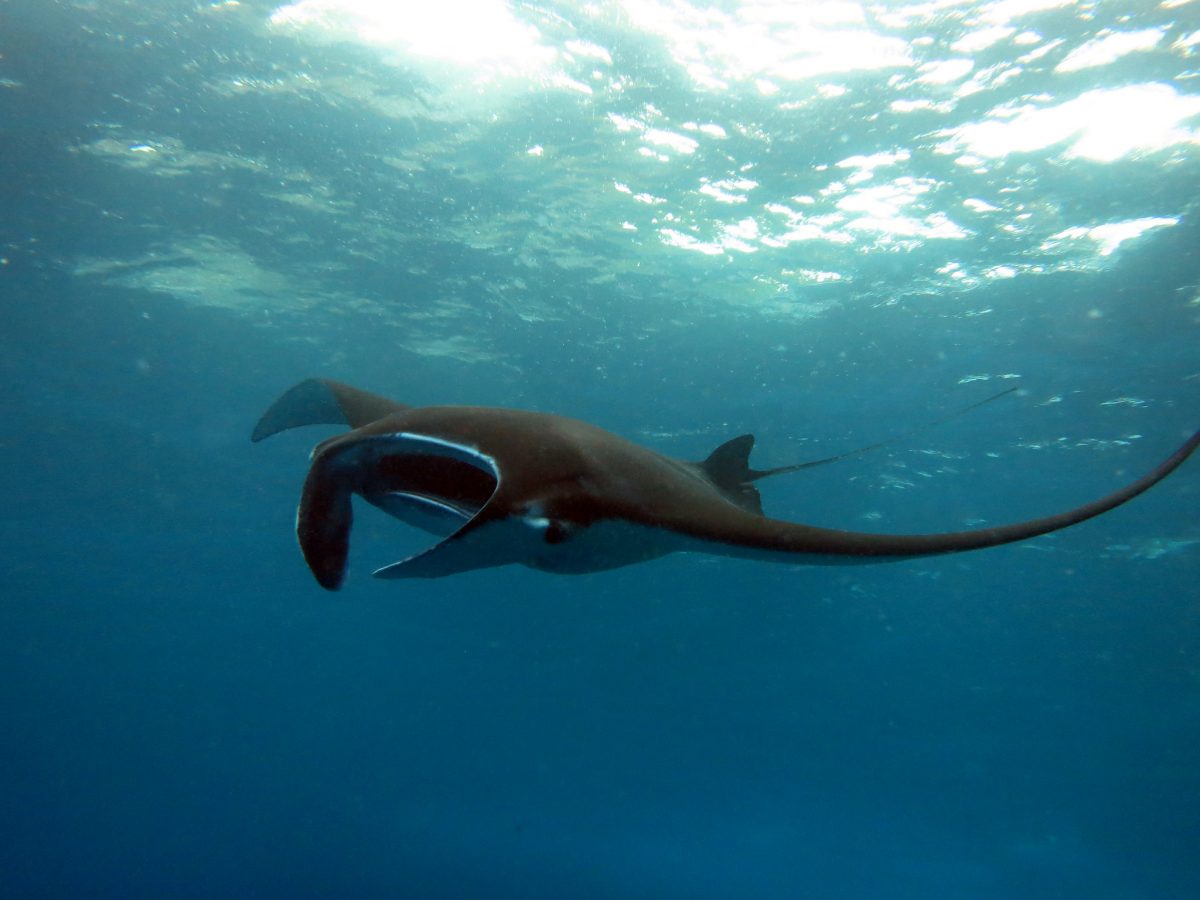 Not only is Bali one of the best holiday destinations, but it is also a diver’s paradise. A small island located near the southeast coast of Bali is Nusa Penida. This is the place where you will find two spots where mantas can be seen. The Manta Bay and the Manta Point both have a large population of manta rays between July and September. 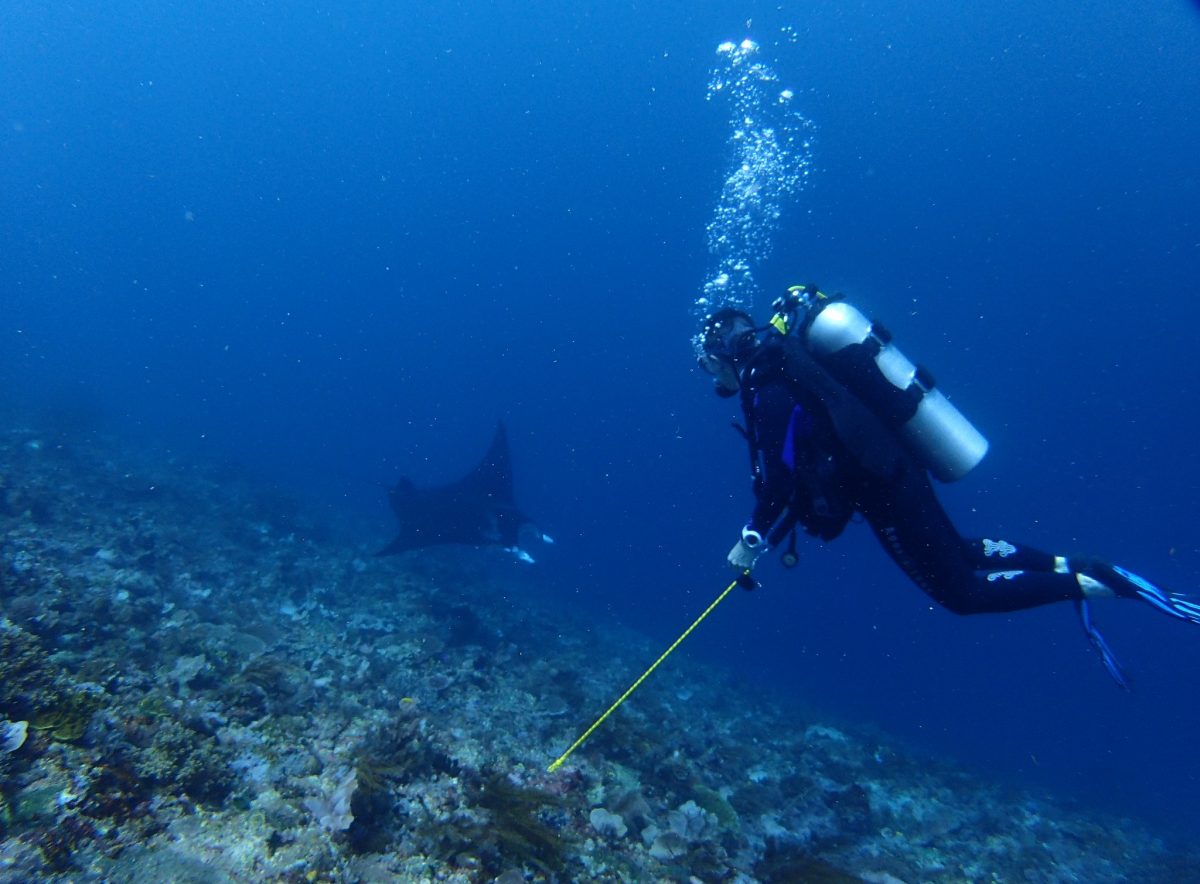 Raja Ampat is the third destination in Indonesia, which is famous for spotting a manta ray. However, this is not an easy location to reach. It is situated in a remote place, which is why it is one of the places where you can have a dive in a peaceful environment. December to March is the perfect time where you will be able to spot the Mantas in the waters. 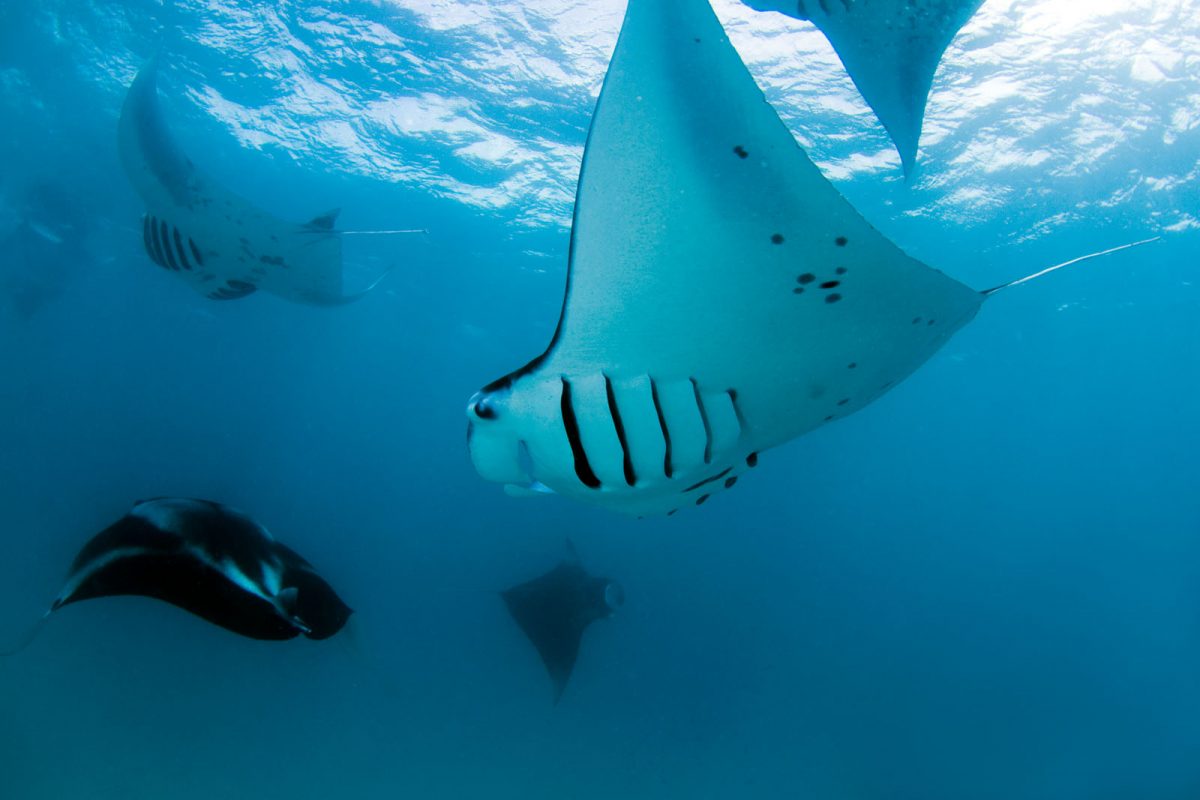 Baa Atoll in the Maldives is another location to spot manta rays. Its geographical location allows it to have a massive concentration of planktons, which is the primary food for them. It is home to over 40% of the total manta ray population in the Maldives. 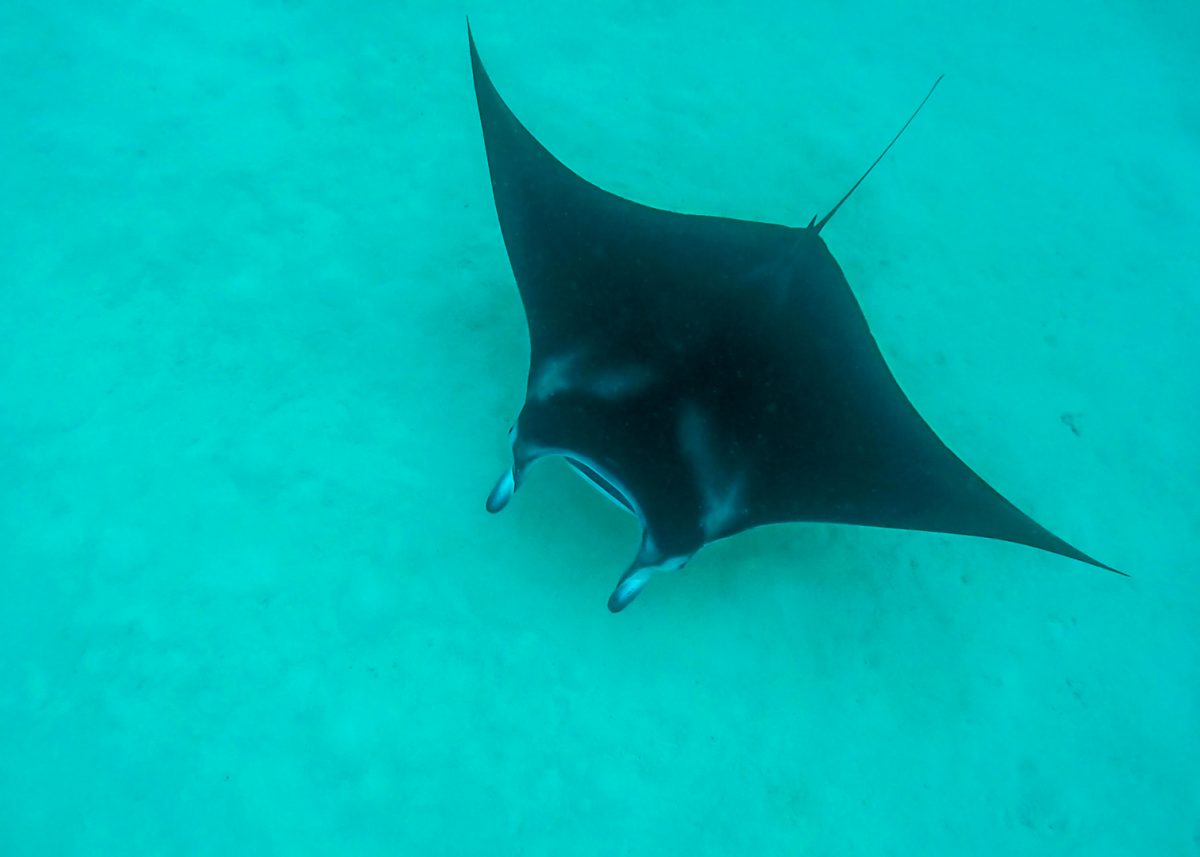 Ari Atoll is one of the central Atolls in the Maldives and is also one of the most famous destinations for the divers. Diving sites such as Madivaru Manata Point, Fesdu and Paneton are the primary locations for some Manta spotting. 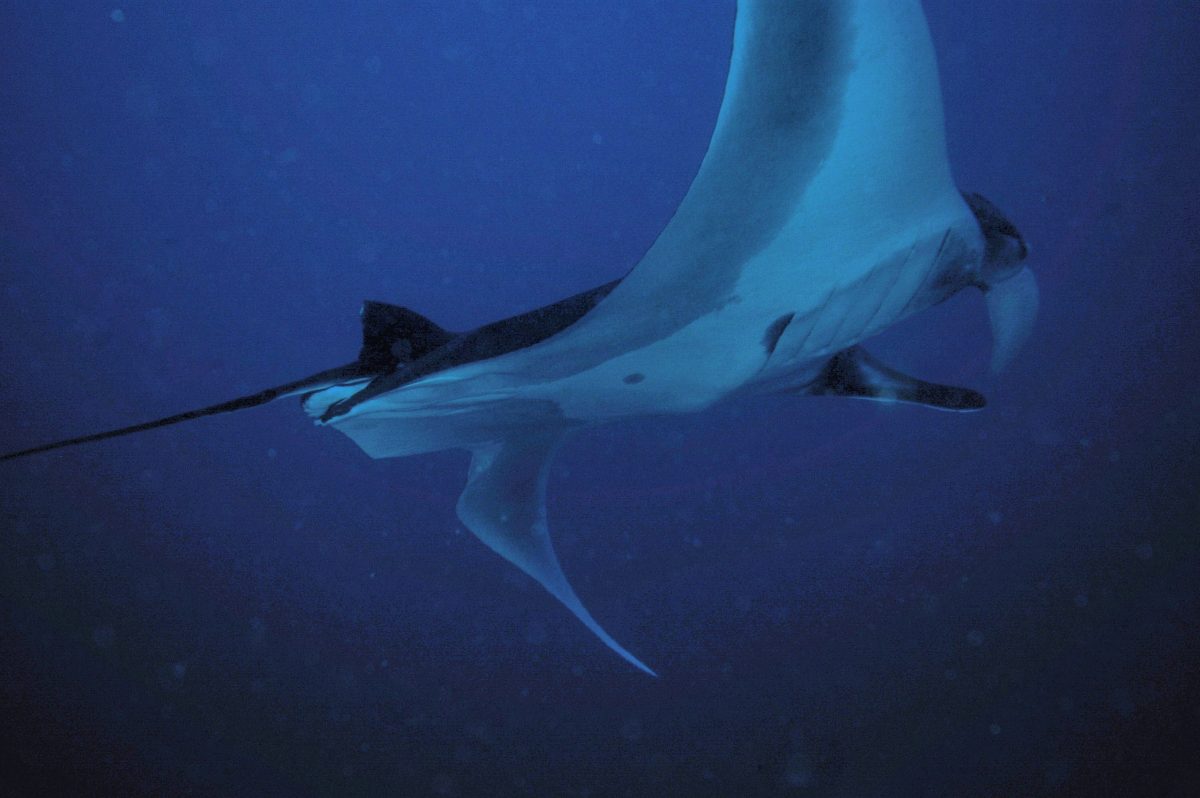 Cabo Marshall of the Galapagos island is another best place for sighting manta rays in their natural habitat. A dive in the back corals will not only give you a chance to see some mantas, but you will also be able to spot a lot of other creatures including the hammerhead sharks, pufferfish, white-tipped reef sharks and even the parrotfish. So, if you want a one-of-a-kind diving trip, Cabo Marshall should be on your bucket list. 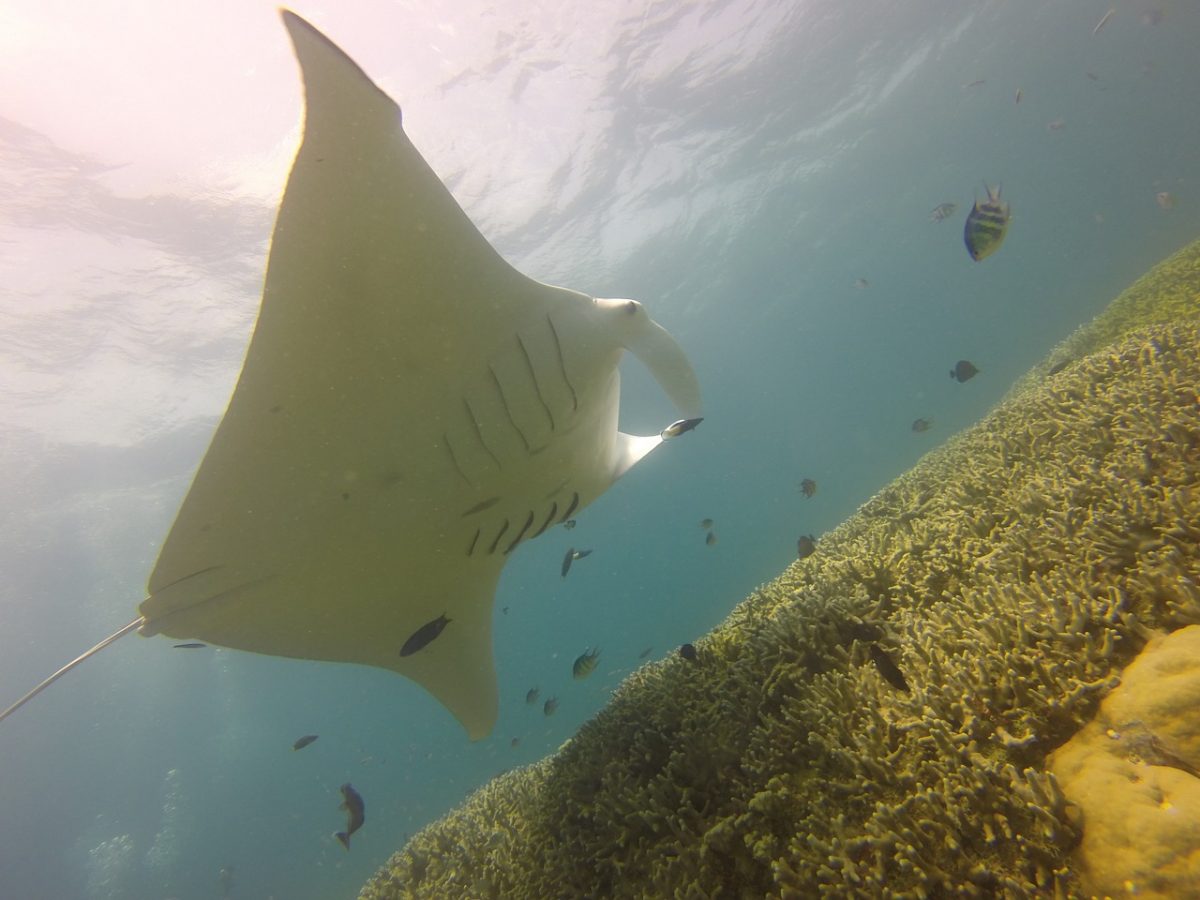 © Photo by Arhnue Tan on Pixabay

Yap is a cluster of the island situated in Micronesia. This is considered as one of the best spots for diving and is a dream destination for a lot of divers. The reason this place is not explored is because of its location. It is a hard trek to the location where you will be surrounded by abundant marine life. The Mi’il Channel and Goofnuw Channels are the two places for spotting manta rays in the crystal clear waters. 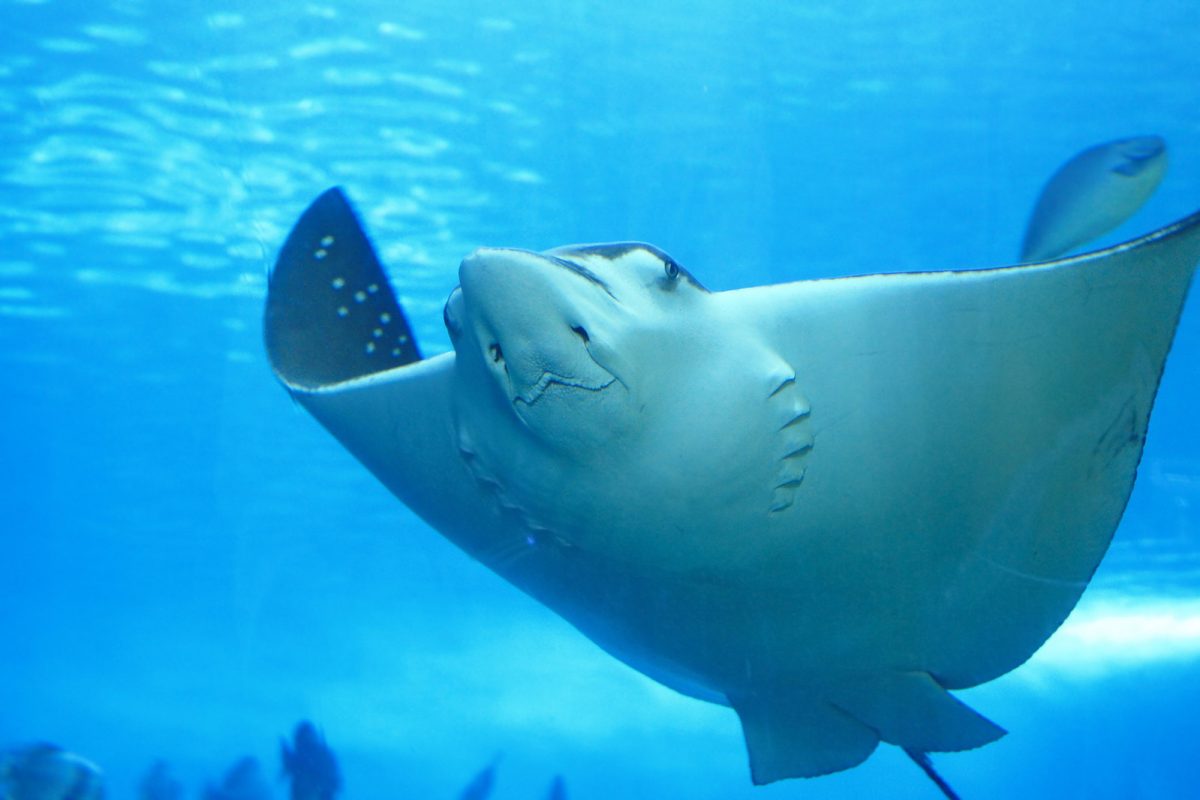 Lady Elliot Island is one of the main destinations in Australia to see the manta ray. It is also called the house of manta rays because, during the winter season, one can spot up to 100 of them in a single dive in the waters. The best time to dive in the Great Barrier Reef, however, is between June and August. 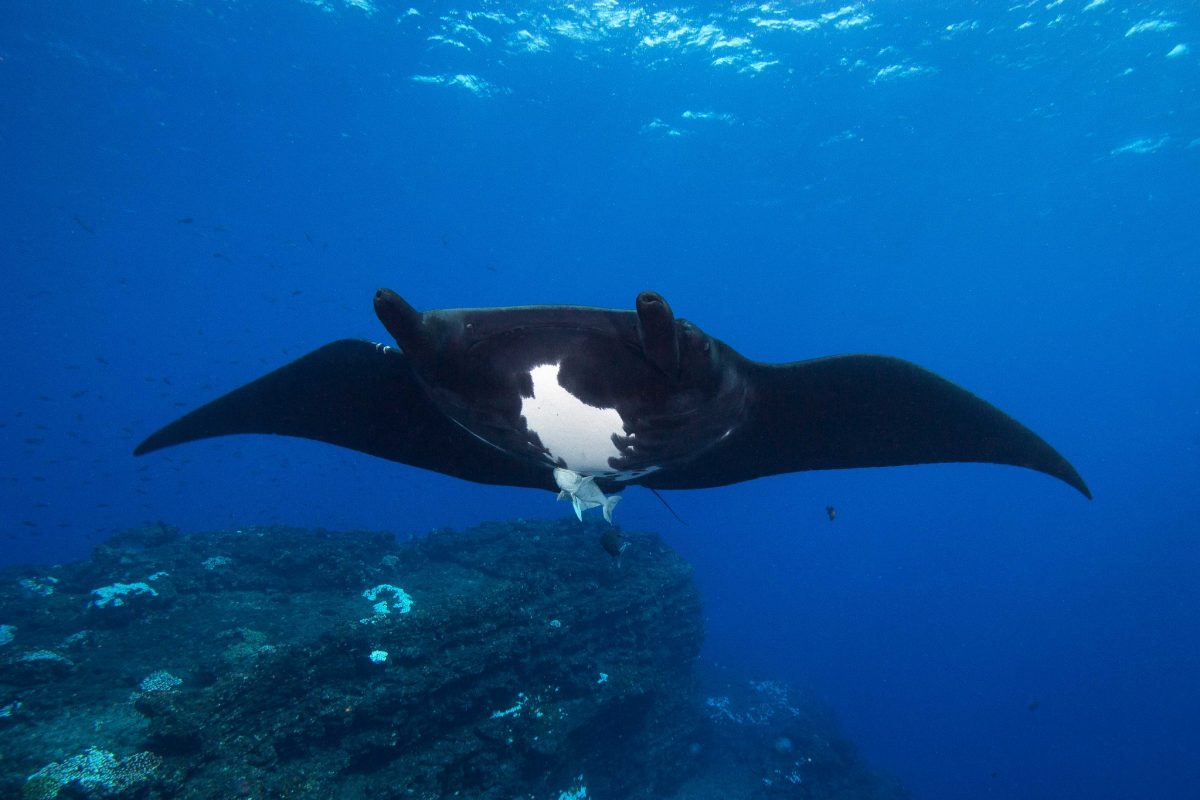 If you want to encounter the giant oceanic manta ray in the Pacific Ocean, then the Revillagigedos Island in Mexico is the best spot. These huge manta rays can be spotted in their natural habitat swimming in the waters.

Guidelines To Follow While Diving With The Manta Ray

Even though scuba diving with the mantas can be a magical experience for divers, there are few pointers you should consider before diving in the water.

Manta rays are big creatures, and it is better to stay at least 3 metres away from them. Being so close to a manta ray can be an exciting experience, but since they are massive creatures, you might get hurt. Although it has been said that the mantas has habits of playing with the bubbles, but it is better to keep breathing and stay calm.

Do not point your flash directly in the eyes of the manta ray.

Do not chase after the manta ray. It can swim really fast, and you will not be able to catch up. When you stay still, the creatures will come to you as they are very curious.

Chose one of the given destinations for your diving tip the next time and had a once in a lifetime experience of swimming along with the mantas. Who knows you might end up discovering some other kinds of sea creatures?

Here’s the best underwater cameras you should bring along to capture some selfies with the mantas!