One common misconception is that geisha are courtesans – they are not. Also known as geiko in Kyoto, geisha spend many years to perfect Japanese arts. They also attend to guests and perform in banquets, high-end dinners, private parties, ochaya (tea house in geisha districts), and other special events.

The Origins And History Of Geisha 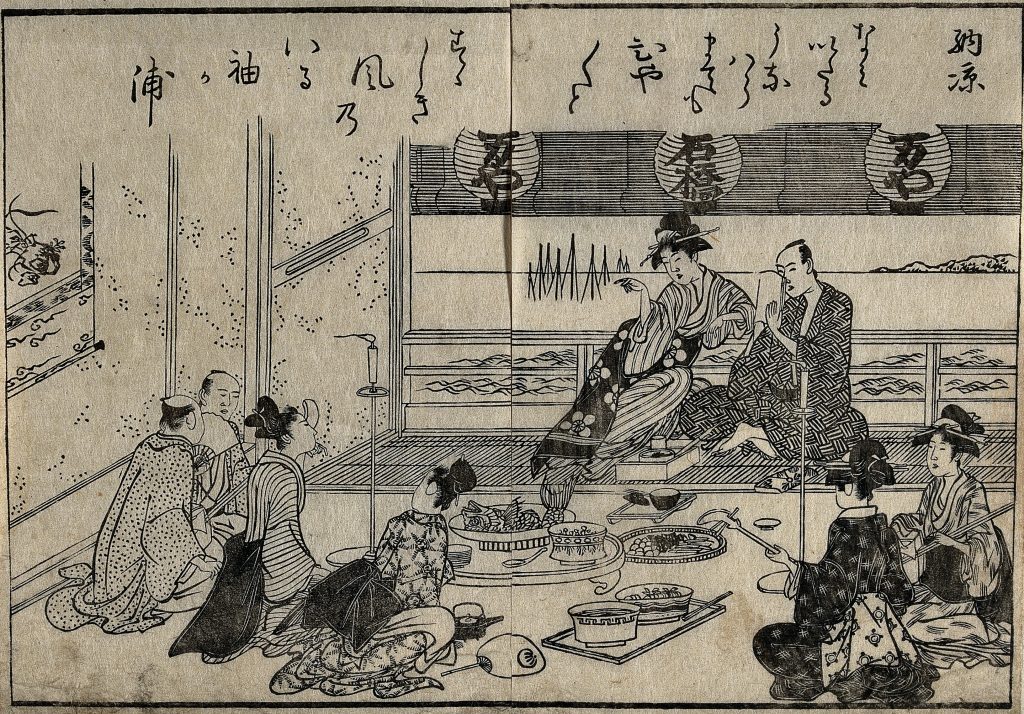 In 1617, the shogunate established “pleasure quarters” to constrain crime. These districts then became entertainment centres that offer more than sex.

It was around 1730 that “geisha” first appeared as a way to set themselves apart from courtesans and prostitutes. The first geisha were actually male entertainers, and they work to assist oiran (courtesans). They serve guests by playing music, telling stories, employing humour, and providing light-hearted conversations. It was around 20 years later that female geisha first emerged. As they become widespread, many started working solely as entertainers. Later, there were regulations that banned them from selling their bodies to protect oiran’s business.

Geisha became a predominantly female occupation in the 1800s, rising in popularity until World War II. Due to the war, many geisha houses shut down. Normal prostitutes also started to refer to themselves as “geisha girls” to the American troops, forming the misconception that still persists today. Even after the war, the western influence made it hard for geisha to return to its former meaning.

While geisha are still present today, the numbers have been dwindling over the years. This is due to the stricter regulations put in place post-war and the decline in women entering the profession.

How To Be A Geisha 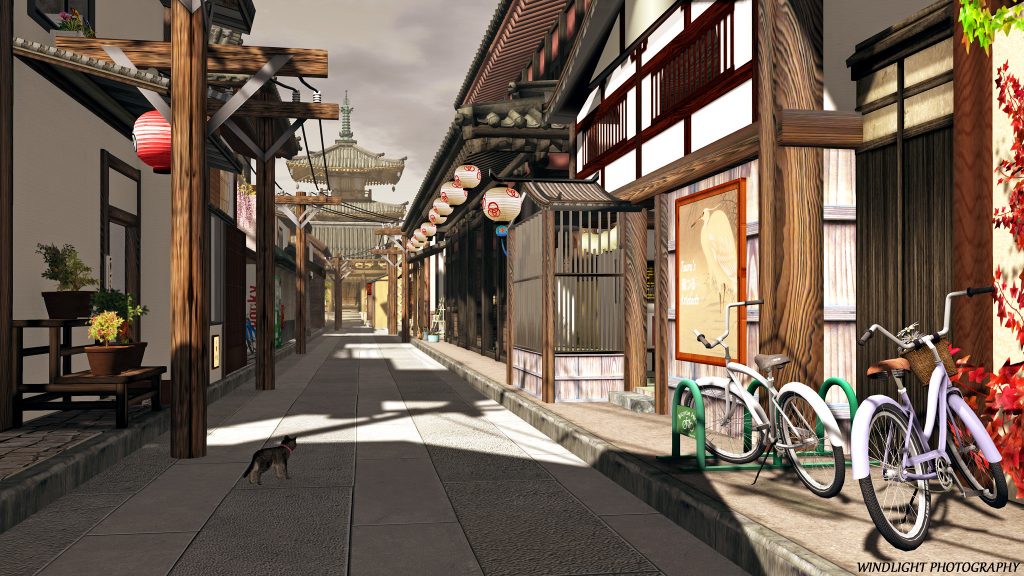 In the past, they began their training from a very young age. Girls were bonded to okiya (geisha houses). The okiya provides them with food, board, and the necessary attires and tools of the trade. Geisha in-training are called maiko (apprentice geisha). Daughters of geisha may be brought up as geisha themselves as their successors.

Training costs are very high so maiko have to repay their debt to the okiya with their earnings. This is so even after they become full-fledged geisha. They can move out and work independently once their debt is fully paid.

However, geisha today typically begin their training after junior high school or high school. Geisha in Kyoto begin their training at 15 years old, while their counterparts in Tokyo tend to start when they are 18. Once they reach 21, they are fully initiated as geisha. The training in Kyoto tend to be more regimented. The first step is to apply and be accepted into an okiya. The proprietress or owner of an okiya is called okaa-san (“mother”). Upon acceptance, training commences.

When a girl gets accepted into an okiya, she undergoes shikomi, which is the first stage of training. This phase can last to around 10 months. As shikomi, she is to work as a housemaid, do routine housekeeping chores assigned to her, and to serve her onee-san (“older sisters”) in the okiya. While the work is tough and demanding, it teaches the discipline necessary for being a geisha.

Girls also go to geisha school to learn and take lessons on geisha arts, traditions, lifestyle and the Kyoto dialect. After passing the exam, a shikomi becomes a minarai.

Minarai begin their training in the field by watching and learning from their onee-san during events and ceremonies. The minarai phase lasts for around a month. They will thus learn skills such as light conversation and how to interact with guests. While they are usually not invited to parties, they can attend as guests of their onee-san, or be hired for one third of the price of a full-fledged geisha.

During this stage, minarai continue their classes in the traditional arts.

Before they become a maiko, the minarai has to look for an onee-san to be her mentor. The relationship between maiko and her onee-san is extremely vital and important. While continuing their formal arts training in either dancing or musical arts, the maiko will also shadow her onee-san at work, and learn from her everything about working in the hanamachi (geisha district). This also serves as a way for a maiko to gain a deeper understanding about the job of a geisha and to meet potential clients.

Maiko, unlike geisha, are expected to wear their traditional hairstyle using their own hair. They have to sleep on a takamakura (wooden block with a pillow) to maintain the hairstyle. They also wear similar oshiroi makeup and brightly coloured kimono as part of their attire. Maiko wear a different traditional hairstyle depending on their rank or their level of apprenticeship. Geisha, in contrast, usually wear a wig during performances, and have less elaborate kanzashi in their hair.

Maiko learn techniques of conversation, the proper ways of serving tea and sake, and many more. She also learns about the social skills needed to navigate the complex social structure and world of hanamachi.

After three to five years of apprenticeship as a maiko, at the age of around 20 to 21, she is ready to become a full-fledged geisha. The ceremony when a maiko becomes a geisha is called the erikae, where her collar turns from red to white, as a symbol of her debut as a geisha. Afterwards, she can now work as a full-fledged geisha.

Where Can I See Geisha In Japan? 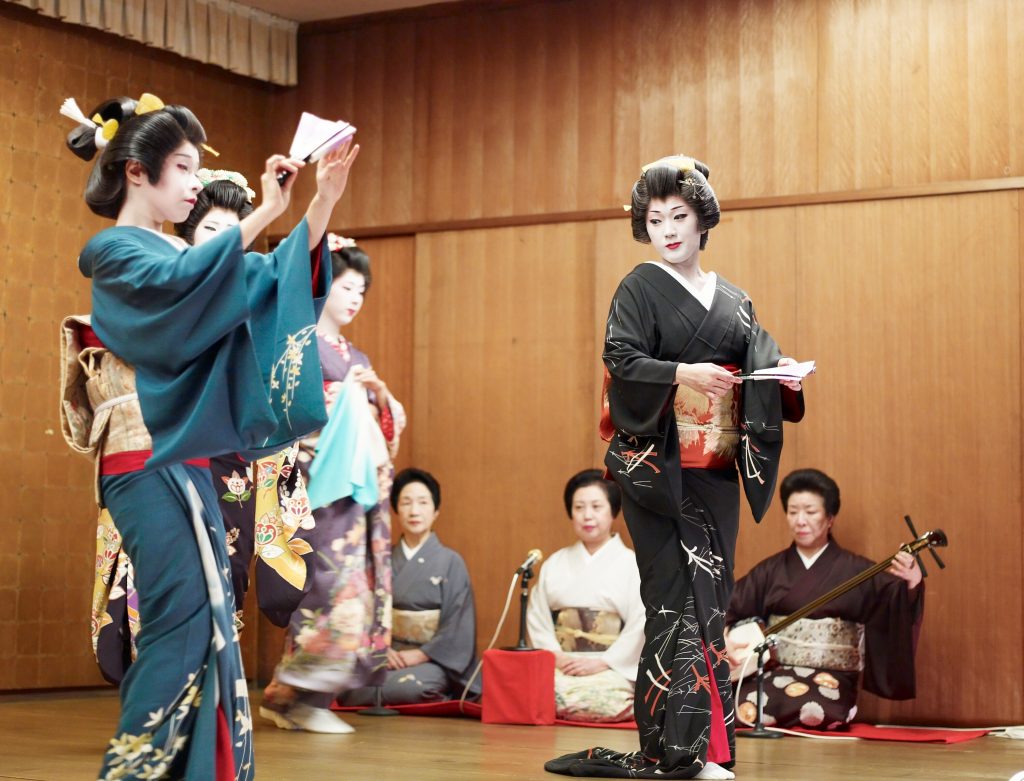 Geisha are more commonly associated with Kyoto, the old capital where the traditional arts flourish. You can catch a glimpse of geisha in the four hanamachi in Kyoto – Gion (Gion Higashi and Gion Kobu), Ponto-cho, Miyagawa-cho, and Kamishichiken. Hanamachi are where geisha live, train, and where ochaya are.

Most geisha and maiko in Kyoto’s hanamachi can be spotted in the evening, while they are out and heading towards their appointments. There are also annual festivals held in spring at the four hanamachi in Kyoto where you can see them up close:

Held daily in April, Miyako Odori is one of Japan’s best geisha shows, held in the Kaburenjo Theater in Gion kobu. The Miyako Odori began in 1872 and is still going strong even today.

There are three performances each day, lasting for around an hour each, and consists of eight scenes. It features a range of dance, song, and theatrical performances by geisha and maiko. Motifs of the performance are drawn from classical Japanese culture as well as their everyday life. Each ticket are between 4,000 yen to 5,000 yen. 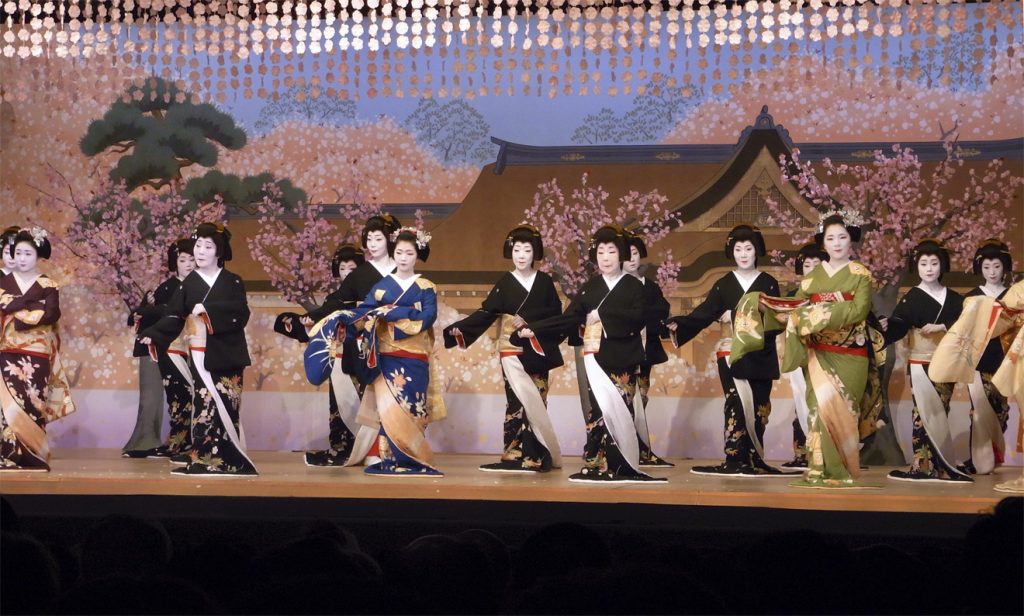 Held from March to April every year by the geisha of the northern Kamishichiken district, Kitano Odori features three sections: a story-rich play, a series of themed dances, and the Kamishichiken Serenade. There are two performances each day. Tickets are 4,800 yen (with tea ceremony served by geisha or maiko one hour before the show) or 4,300 yen (without tea ceremony). 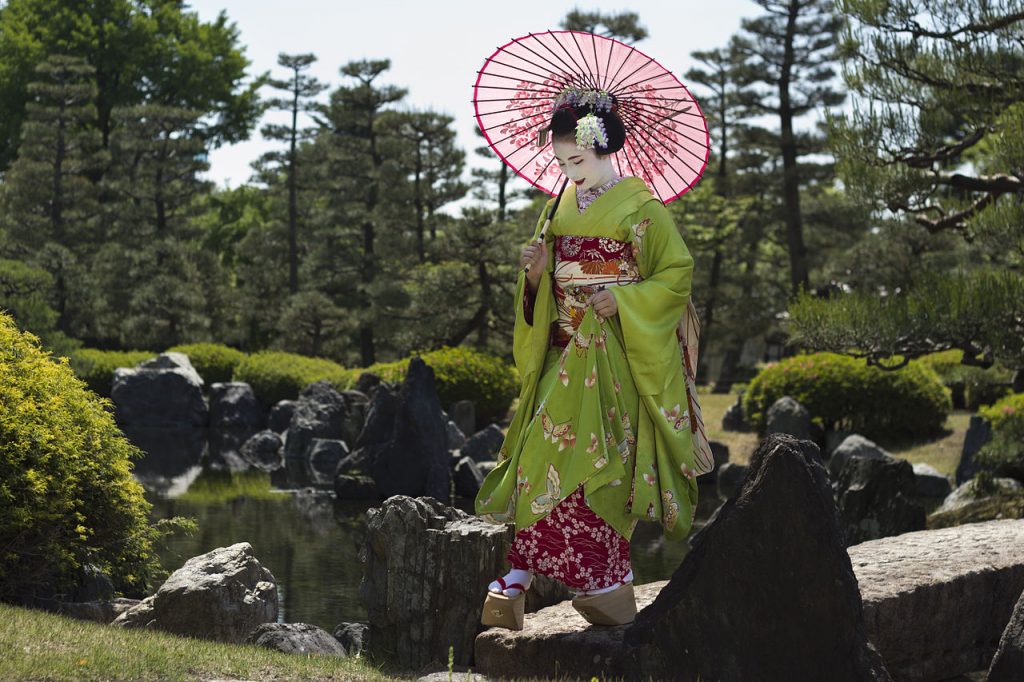 Photo by Japanexperterna.se on Wikimedia Commons

Kyo Odori is the second biggest geisha performance in Kyoto (after Miyako Odori) by the Miyagawa geisha district. It is held for 16 days in April, with three performances each day; ticket prices go from 2,200 yen. Their style of performance bears similarity to Kabuki theater and its art. 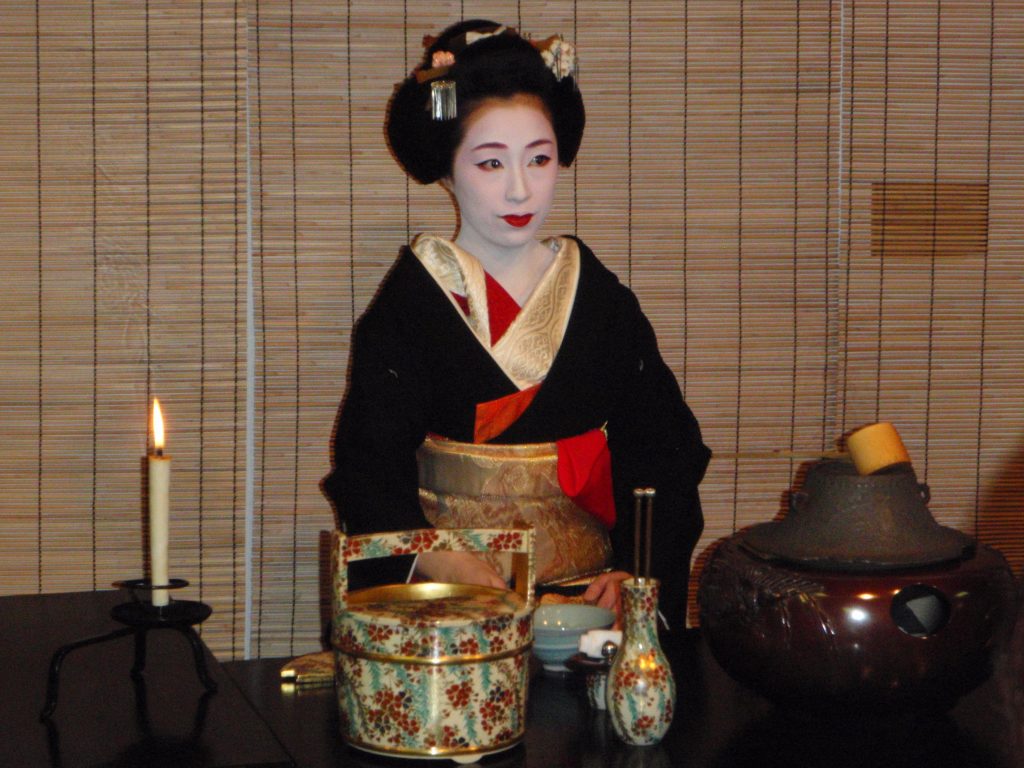 In the month of May, geisha from Potoncho geisha district perform Kamogawa Odori. It features a side-stage for an immersive experience, as well as historical stories and costumes. Prices range from 2,300 yen to 4,800 yen depending on your seats. There are three performances each day. 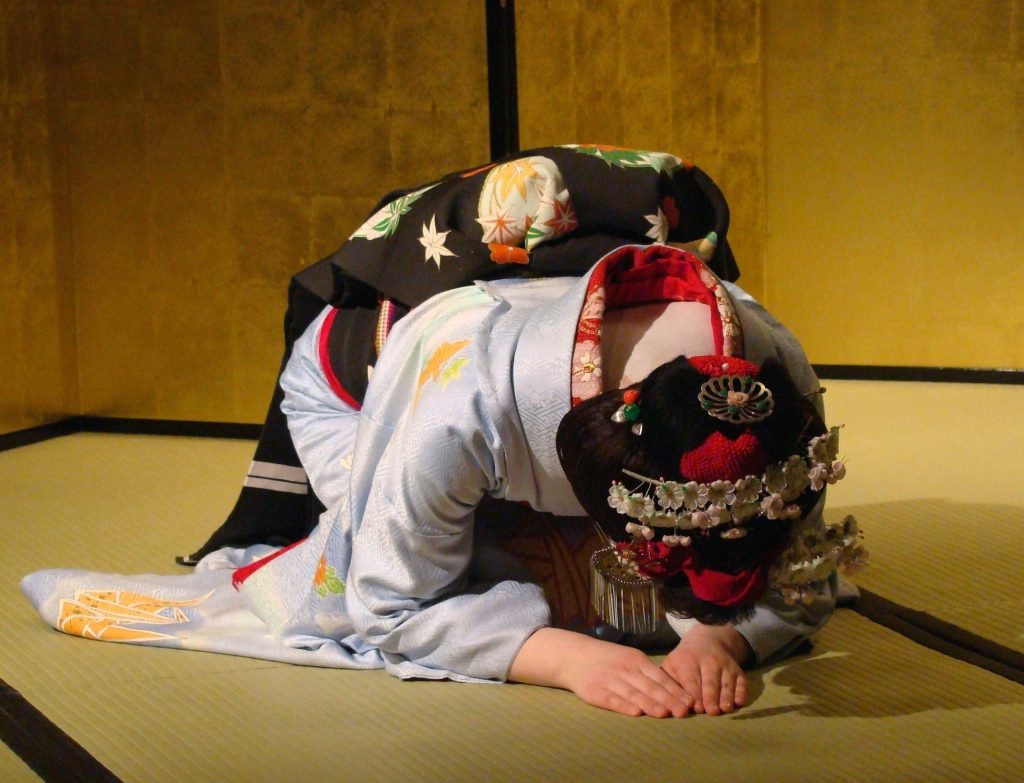 The only autumn performance, Gion Odori is held in early November at Gion Kaikan. It is also one of the smallest shows and thus feels more intimate in comparison to the others. There are two performances daily, with tickets costing 3,500 yen (additional 500 yen for green tea).

You can also find them in the six hanamachi in Tokyo, albeit on a smaller scale – Shimbashi, Yoshicho, Hachioji, Mukojima, Asakusa, and Kagurazaka. The most famous one is in Asakusa. Be sure to keep a look out in the evenings along Kannon-ura street, where ochaya are located. On some Saturdays, the Asakusa Culture Centre holds performances for free.

There are other public festivals in Kyoto and Tokyo’s hanamachi where you are able to see geisha for a slightly lower price or for free. Another way you can meet and even talk to geisha in Japan is to make a reservation at an ochaya. This is considerably more expensive but is a great option for visitors who would like to spend more time with and learn more about.