So, you want to go skydiving? Ready yourself for one of the most adrenaline-pumping activities out there. Prepare to get the heart racing and the hairs on the back of your neck standing to attention. Yep, this is easily one of the most thrill-filled pursuits travelers can go for. It’s just what you might expect from free-falling thousands of meters from a perfectly good plane to the ground with only a parachute strapped to your back.

But there’s also more to it than simple exhilaration. Skydiving and tandem skydiving are also a unique and awesome way to see a destination abroad. They promise to give you a whole new perspective that you simply can’t get from ground level. Soaring above the clouds and above the bucket-list sights, you’ll be able to see across the horizon. You’ll be able to appreciate the grandeur of cities. You’ll be able to glance north, south, east, and west, from the mountains to the ocean and beyond.

This list of the best international skydiving spots is a must-read for any thrill-loving globetrotter. It whisks you from the snow-capped peaks of the Southern Alps in New Zealand. It takes you to the dusty deserts of Dubai. And it’s even got some amazing urban tandem skydive possibilities, with the likes of skydive Chicago and Rio de Janeiro making an appearance. To get flying, start reading… 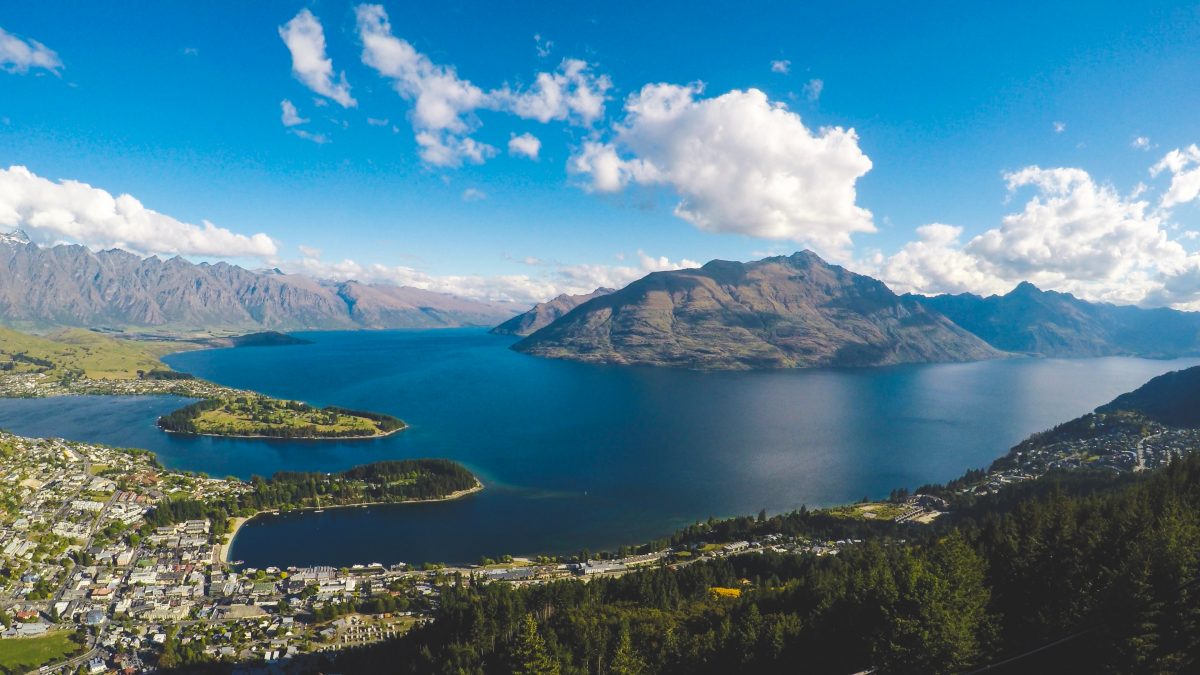 New Zealand isn’t hailed as the world’s adventure sports mecca for nothing. This is the land where the bungee was invented. It’s the home of the high-speed river jet boat. And there are more long-distance hiking paths than you can shake a walking stick at. Of course, that means that skydiving opportunities are never too far away in the land of the Kiwi.

If you’re keen to strap on the parachute in these parts, heading for South Island’s adventure haven of Queenstown is a sure bet. The city has made its name as the place for thrills in the great outdoors. There are loads of outfitters than can sort you out with tandem skydive packages. They promise to clock up altitudes of a whopping 15,000 feet, seeing you plummet at more than 200 km/hour back down to the surface.

One thing that really sets a skydive in New Zealand apart from the crowd is the views. On South Island, that means sweeping panoramas of the Southern Alps as you fall. You’ll spy out the snow-capped top of Mount Cook. You can look for glistening lakes under the ranges of Wanaka. You can see the carved summits of Ben Lomond and the craggy Remarkables, all spreading out in a majestic display of Southern Hemisphere nature. It’s pretty awesome stuff. 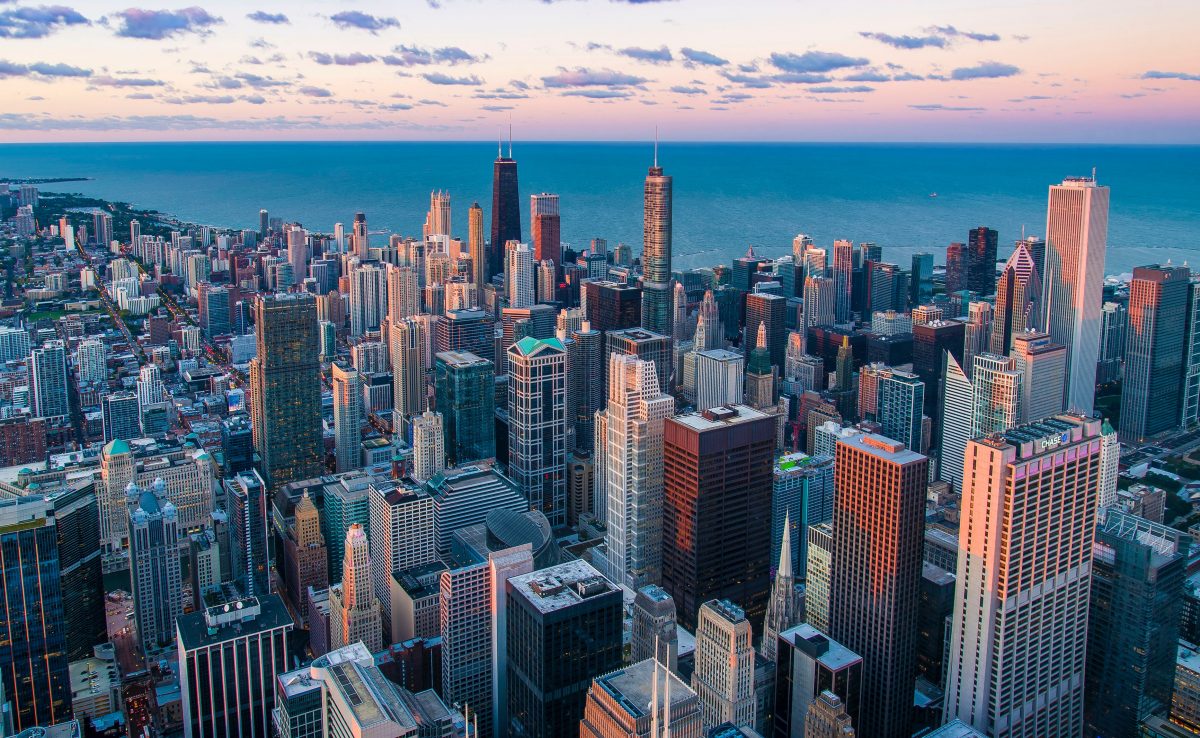 Let the fabled wind of the Windy City take you skywards by hopping on a tandem skydive with Skydive Chicago. One of the most celebrated centers for aeronautical thrills in the whole the American Midwest, these guys have got tailor-made packages for first-time jumpers. They include 60 seconds of freefall and speed limits of 120 miles per hour. The skydiving cost is also notably affordable here, with rates hovering around the $200/person.

You can find their modern drop-zone base in little Ottawa, IL. You’ll depart for your jump just on the south-western edge of the massive metropolis itself. And that means Skydive Chicago really does live up to its reputation. It gives sightings of iconic structures like the Willis Tower, landmarks like Millennium Park, and the banks of Lake Michigan as you fall! 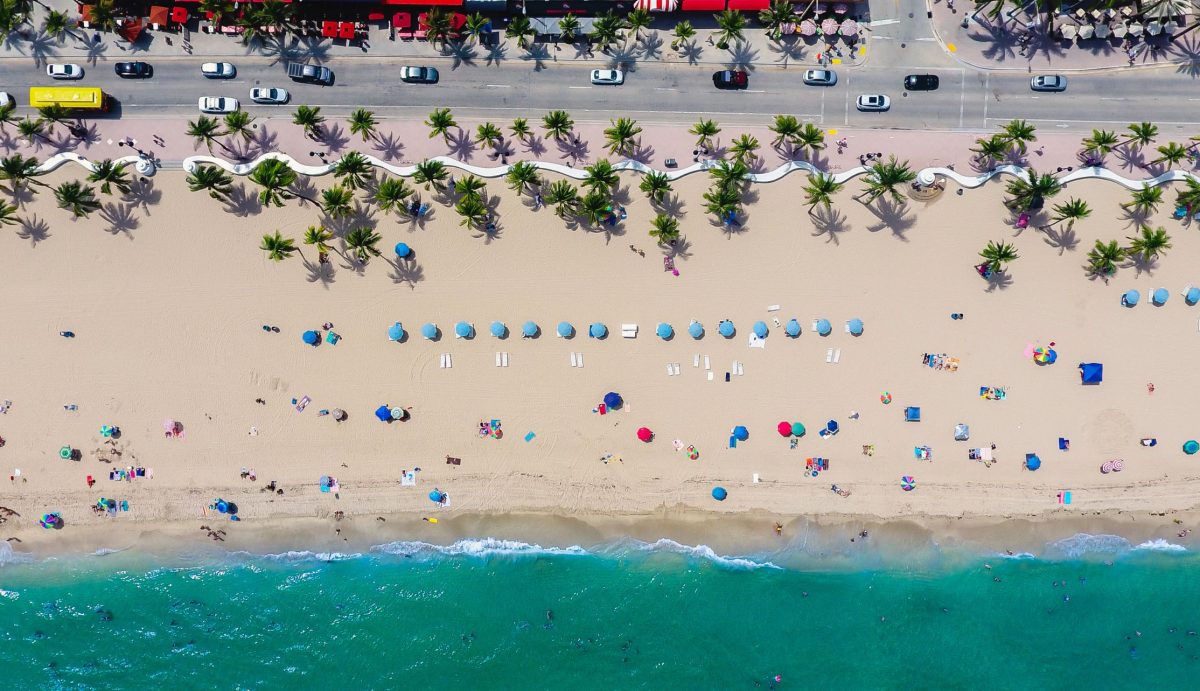 ©Photo by Lance Asper on Unsplash

It’s not just moon-bound shuttles that take off from the so-called Space Coast of Florida, mind you. Skydives also start on this glistening section of Atlantic shore. They originate in the Skydive Space Center of Titusville. That sits just a stone’s throw from the barrier isles of Cape Canaveral and the national seashore that adorns the ocean.

Packages include briefings for beginner riders and optional video extras. Then, you’re lifted way above the Sunshine State for the jump itself. As you leave the plane behind, visions of surfers whizzing across the swells of Cocoa Beach meet the emerald green reaches of the vast central Florida wetlands, all hemmed in by the deep blue of the sea as it rolls to the horizon in the east. 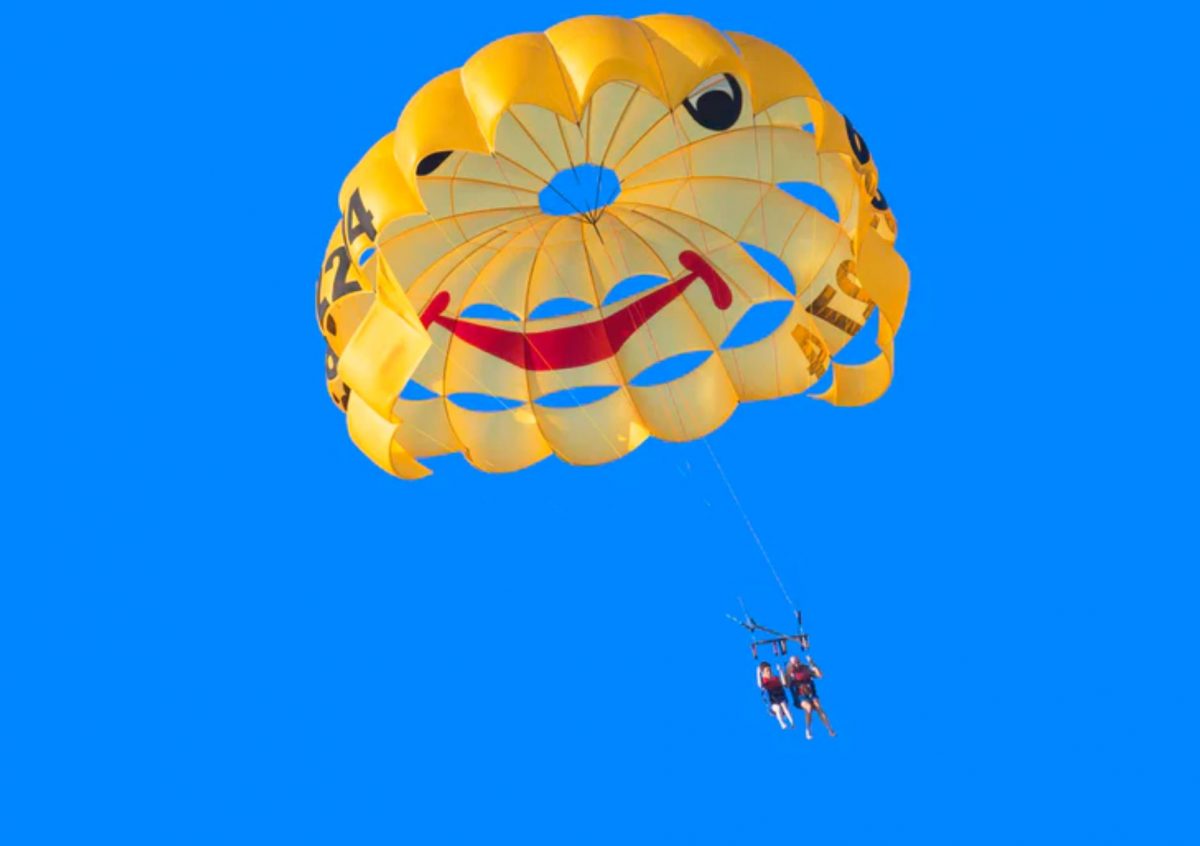 ©Photo by Quino Al on Unsplash

In a country renowned for its dusty sierras, shimmering seas, and orange tree-speckled plains, what could be better than taking to the skies? Thankfully, there are loads of skydive schools in the home of flamenco ready and waiting. They offer drops from up to 15,000 feet of altitude, with a monstrous 4,600 meters from plane to landing.

Leading the way is Skydive Spain. That’s one of the best-known schools for learning to plummet from the clouds in Europe. They have courses in free-falling that cost just over $2000. However, for total novices, there are tandem promotions for as little as $200. All that comes with multi-lingual instructors and team training sessions.

And what about the views? Be ready to be wowed. Suffice to say, dropping over the tops of the ancient city of Seville means something stunning awaits. As you accelerate back towards the planet, panoramas of the Mediterranean Sea, the Costa del Sol’s gold-tinted beaches, and endless swathes of citrus groves appear. You might also be able to spot the centuries-old Moorish palaces in the old town itself! 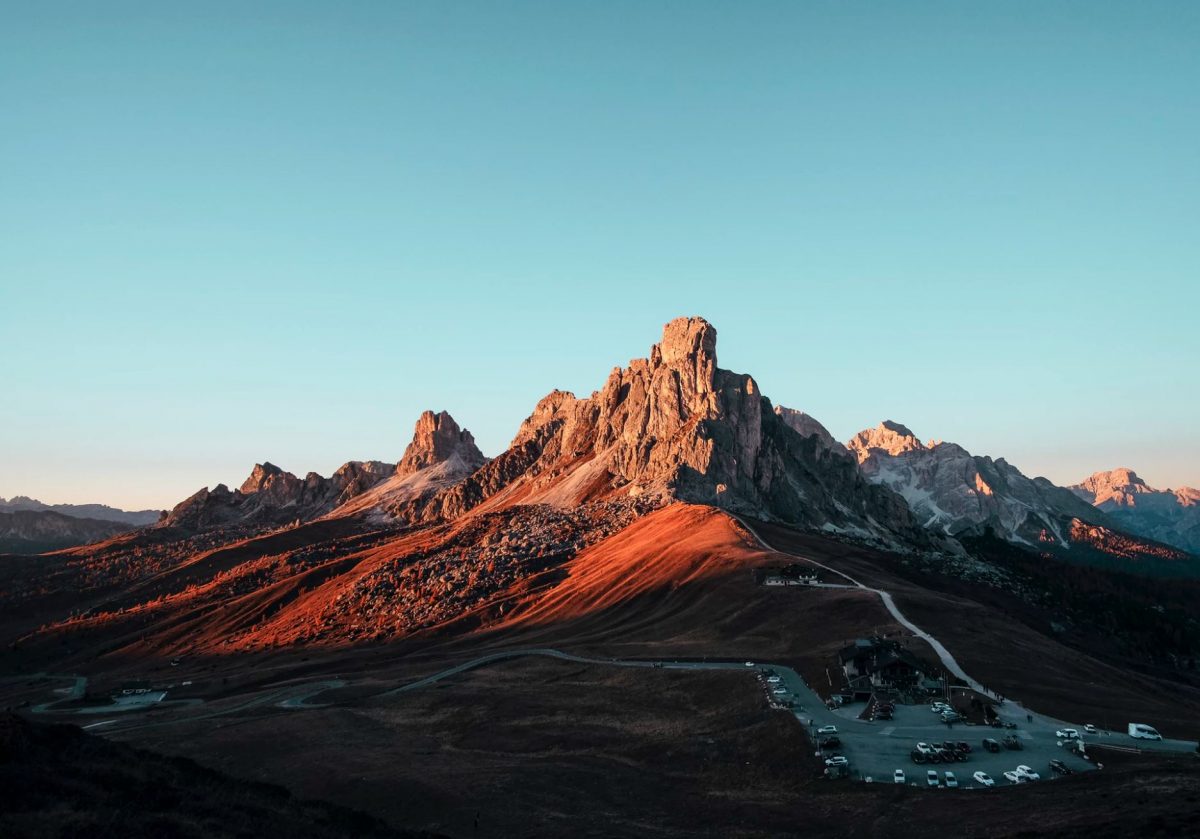 ©Photo by Cristina Gottardi on Unsplash

While Italy might conjure images of lazy days in a Tuscan villa and romantic sunsets on the Amalfi Coast, there are also chances to get the adrenaline pumping in this southern corner of Europe. In fact, skydive schools pepper the whole country. They each come with competitive skydiving prices and – most importantly – their own amazing set of views.

Down south, you could enlist the help of Skydive Sicilia. They’ll lift you high above the fabled island of Sicily, for tandem skydive drops that take in the beautiful coastline, ancient Greek temples, and the snow-covered top of Mount Etna itself!

However, there’s arguably nowhere better to go skydiving in Italia than in the north. That’s where the Alps crash towards the clouds. Providers like Skydive Venice offer trips with vertical drops of 4,500 meters. Clear days on those mean views that take in the rock-ribbed Dolomites and the lagoons of the City of Canals to boot. 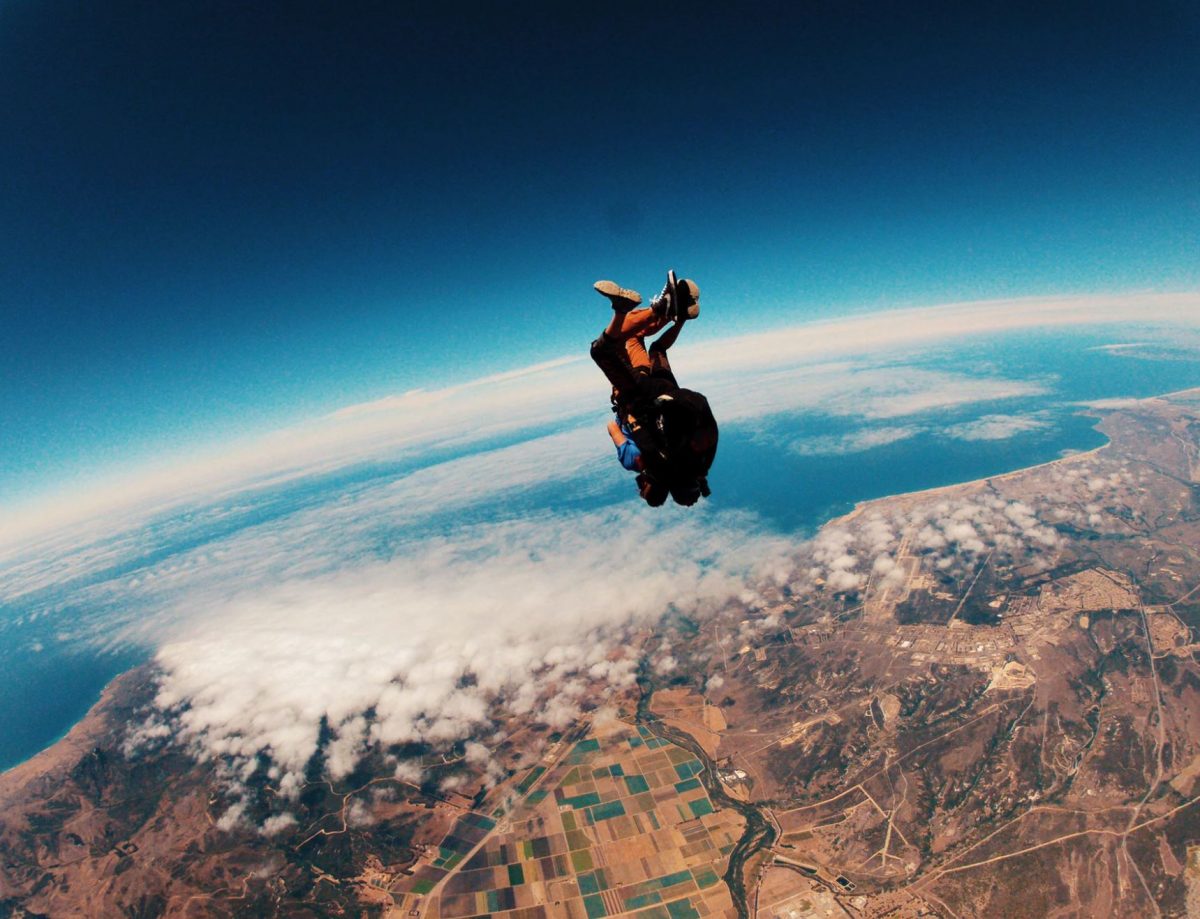 ©Photo by Muzammil Soorma on Unsplash

Thrills and the Golden State are a match made in heaven. There’s endless surf from Malibu to Santa Barbara. There are world-famous hiking paths like the Pacific Crest Trail. And you’ve got epic drives and stargazing to get through in the national parks. However, there’s really nothing that can compare to witnessing California unfold from a bird’s eye perspective.

You might have to fork out just a little extra for the pleasure of jumping along the West Coast. And while the skydiving cost in these parts might be more, the views are on another level. Those hopping from a plane around LA are treated to the dusty bowls of the Santa Ynez Mountains, peppered with wineries and farms. Those doing it closer to Sacramento can witness the sharp tops of the Sierra Nevada and the glowing waters of Tahoe. Others will go for the wild north coast, where redwood forests meet long-lost beaches covered in sea lions. 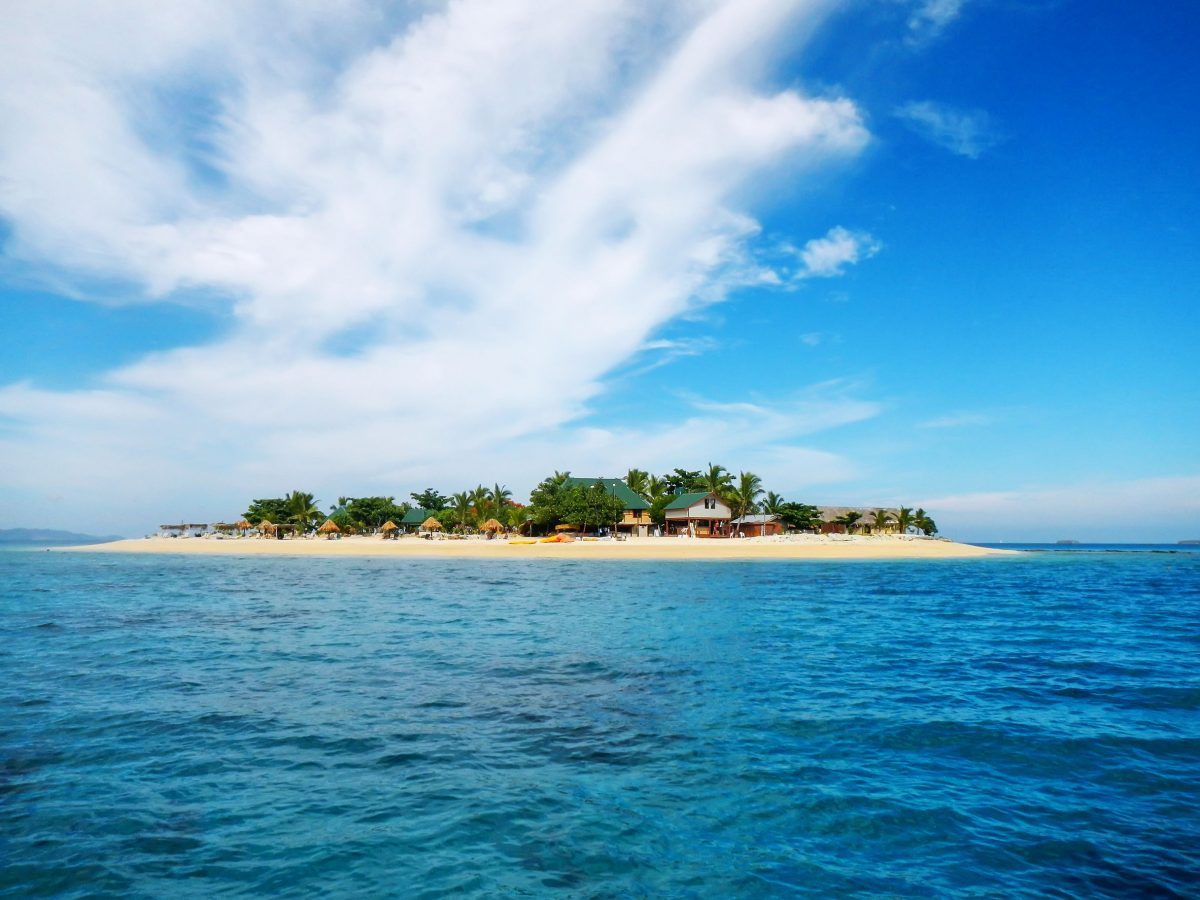 Falling from the skies in Fiji is something you will simply never forget. Unlike many of the skydiving experiences on this list, the packages in this South Pacific paradise promise to reveal vistas islands surrounded by cobalt-blue ocean.

Skydive Fiji claims to offer the highest adventure pursuit in the country. Go with them and you can choose between 10,000-foot jumps that last 30 seconds in freefall and 14,000-foot jumps which give a full minute of unhindered descent. Expect the cheapest skydiving prices here start at around $315.

And when it comes to the views? Words can hardly do it justice. Turquoise lagoons caress white-sand beaches. Jungle-clad mountains rise and fall. Robinson Crusoe islands with stooping palms speckle the water. It’s an amazing, amazing place for a skydive, no questions… 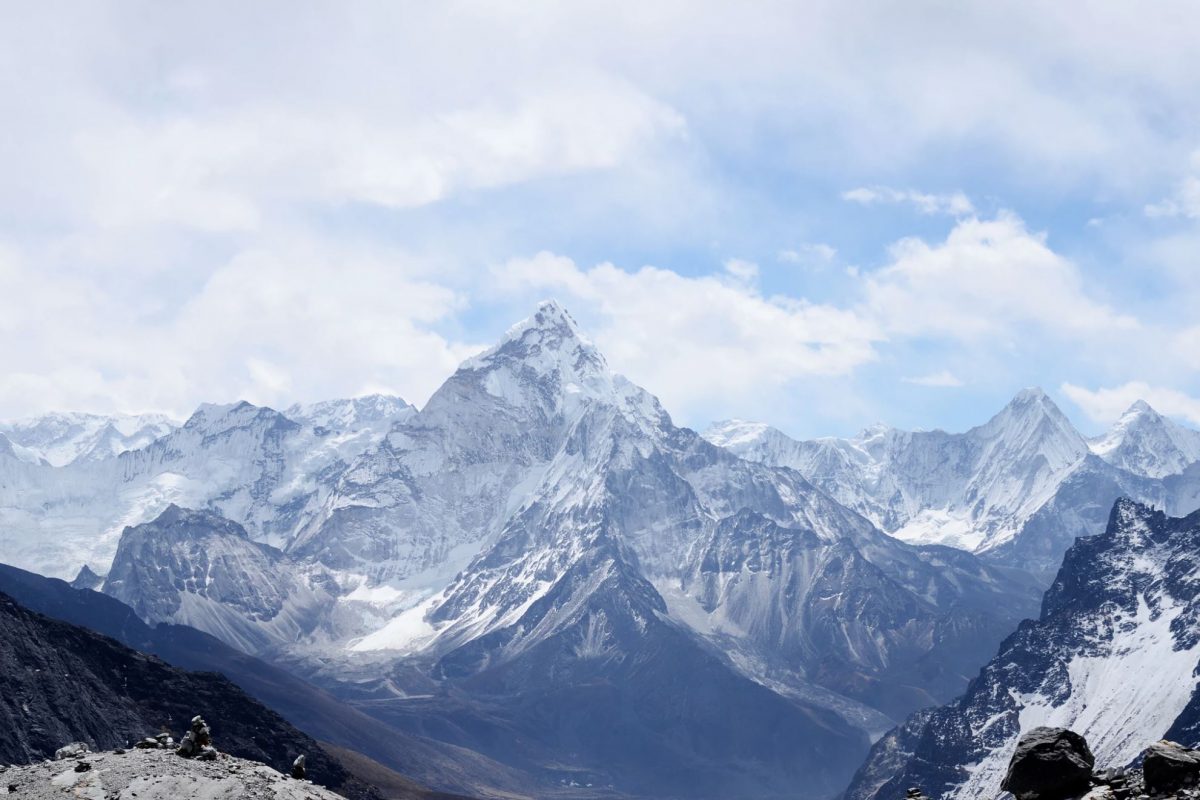 ©Photo by Rohit Tandon on Unsplash

Skydiving in Nepal hits its zenith at one thing: Everest. Yep, this is the home of the single highest point on Earth. In fact, the altitude of these climes is so high, that jumpers make use of a helicopter, not a plane. Those crafts can take you deep into the Khumbu region where the mighty mountain itself is found. There, you’ll freefall while looking at the glaciers of Everest, colossal Nuptse, and oodles of other iconic summits.

Just don’t expect the thrills of Nepal skydiving to come cheap. Packages in these parts can cost as much as $25,000 per person. However, they often include trekking portions and camping. That’s necessary to get to the starting point of many of the jumps. And that means you can enjoy the teahouses, the Sherpa culture, and trails of the Sagarmatha National Park (a UNESCO World Heritage Site) as you go. 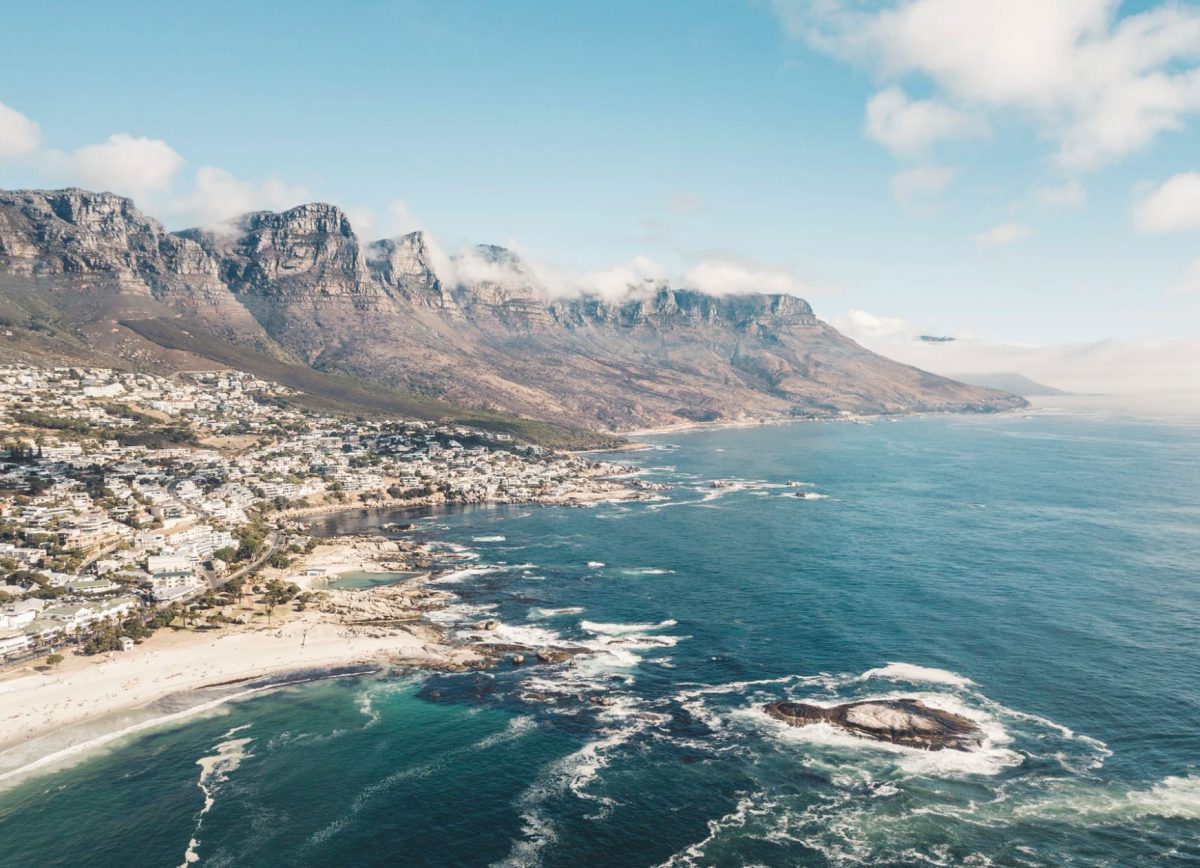 ©Photo by John O’Nolan on Unsplash

They say that Cape Town has one of the most dramatic settings of any city on the globe. It’s easy to see why. The bluffs of Table Mountain erupt straight from a wave-filled ocean. Plains of fynbos valleys and Winelands extends to the north and east. There are whales and penguins to be seen on the coastline all around.

To take it in in a single swoop, skydiving in South Africa can be a doozy. Skydive Cape Town is one of the best-known outfitters in the region. They sit along the R27 highway to the north. Open seven days a week, they have packages for tandem skydives that are great for beginners. They include flights up to 9,000 feet and freefall jumps with top speeds of 120 km/hour.

Going down, things take a turn for the breathtaking. You’ll see the sculpted ranges that enfold the city. You can wander at the ocean-washed rocks of Cape Point. And you might even be able to see as far as Robben Island – the place where Nelson Mandela was imprisoned for 18 years! 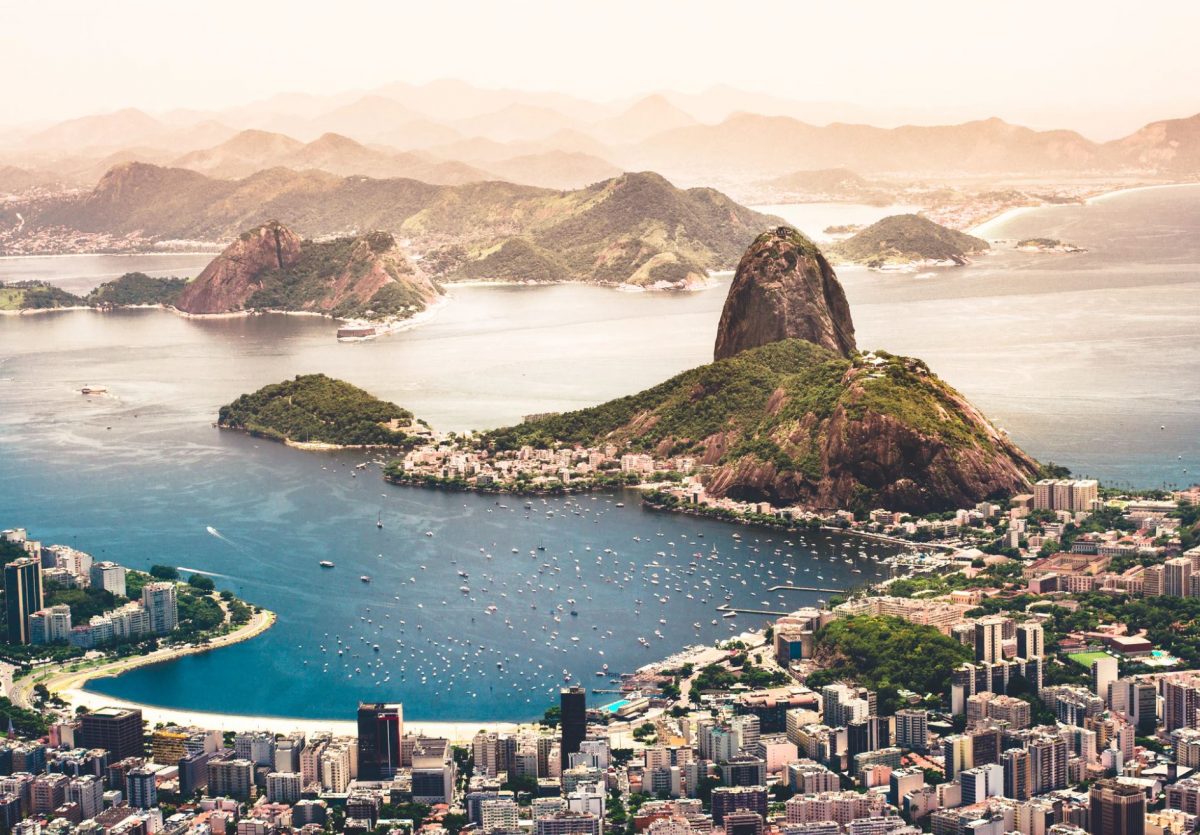 ©Photo by Agustín Diaz on Unsplash

If you can take a break from caipirinhas on Copacabana Beach for a moment, then there’s something truly special about skydiving in Rio de Janeiro. For a city that’s hemmed in by hewn granite mountains on one side and spills into the Atlantic Ocean on the other, there’s arguably no better way to get to grips with the geography. Oh, and you can feel the exhilaration that comes with 40 seconds of freefall from a start at over 13,000 feet!

The views that await on the way down are always going to be amazing. Check to see if you can spot the higgledy-piggledy lanes of the age-old Santa Teresa neighborhood. Or, look to the east for sightings of famous Ipanema Beach and its sand-side clubs. Oh, and let’s not forget the silhouette of Christ the Redeemer. That marks the skyline of Rio from 700-meter-high Corcovado.

There are several companies that have skydiving packages in Rio. Most are based on the outskirts of the metropolis but do often offer pickups from central locations. Skydiving costs start at around $415 in this part of the world.

Finally ready to take on the challenge for an adrenaline rush activity? We curated the top 10 best international diving spots for you. If not, there are many other skydiving spots including skydiving in Dubai, Philippines and many more to choose from. Have you been to any of the diving spots? Share with us your unique experience now! We are happy to hear from you.