One of the top things to do in Istanbul is to pay a visit to the Grand Bazaar. The enormous market holds the record as the largest covered market in the world.

The Grand Bazaar is a great place to get a sense of what life was like during the Ottoman rule of Istanbul. Part of the fun of going to the Grand Bazaar indeed is to just get lost within its large network of streets.

However, it’s important to understand the best things to do in this huge Istanbul market to avoid getting completely disoriented among the hundreds of stalls and alleyways.

History And The Evolution Of The Grand Bazaar 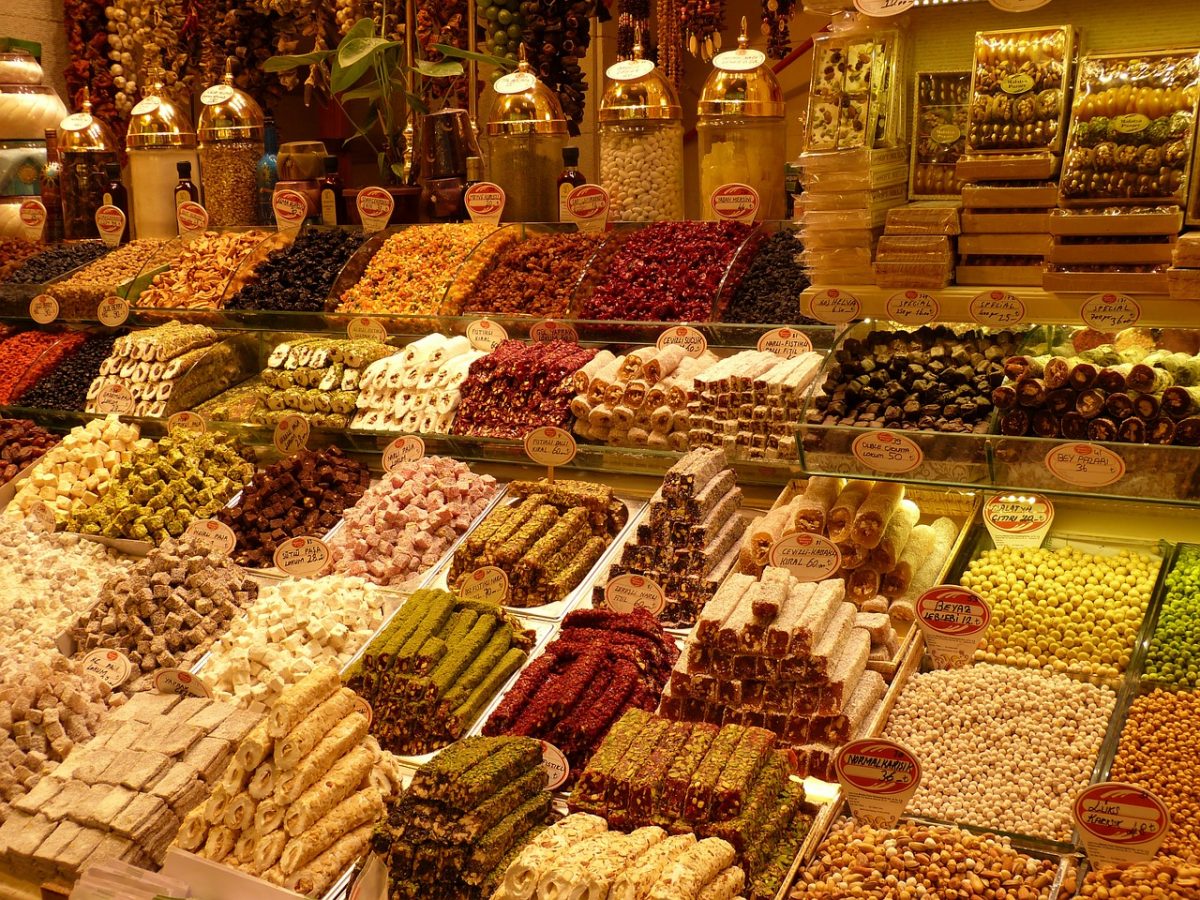 Photo by Falco on Pixabay

At this point, you may be asking yourself, what is a bazaar? Generally, a bazaar is an open market concept that can be found in many different countries.

However, the Grand Bazaar in Istanbul is special because it is one of the oldest and largest covered markets in the world. The first market that stood on this site was called a bedesten, which refers to a series of indoor shops.

This was the historical core of the area for the modern-day Grand Bazaar shops. Istanbul is at the intersection of Europe and Asia, and The Grand Bazaar was the heart of the very active trade culture in Istanbul.

Over time, the Grand Bazaar shops expanded from the small historical core, to what it is today. It is currently a huge sprawling area of covered shops, including workshops and inns.

Not only does this huge Istanbul market include shops, but also amenities and services for the many merchants who work in the Grand Bazaar Shops.

You can find many restaurants, as well as religious sites like mosques and prayer rooms throughout the Istanbul Grand Bazaar area. It even has a police station, post office, and a tourist information center. It’s almost like a city within a city!

Most Famous Products And Shops At The Grand Bazaar Istanbul 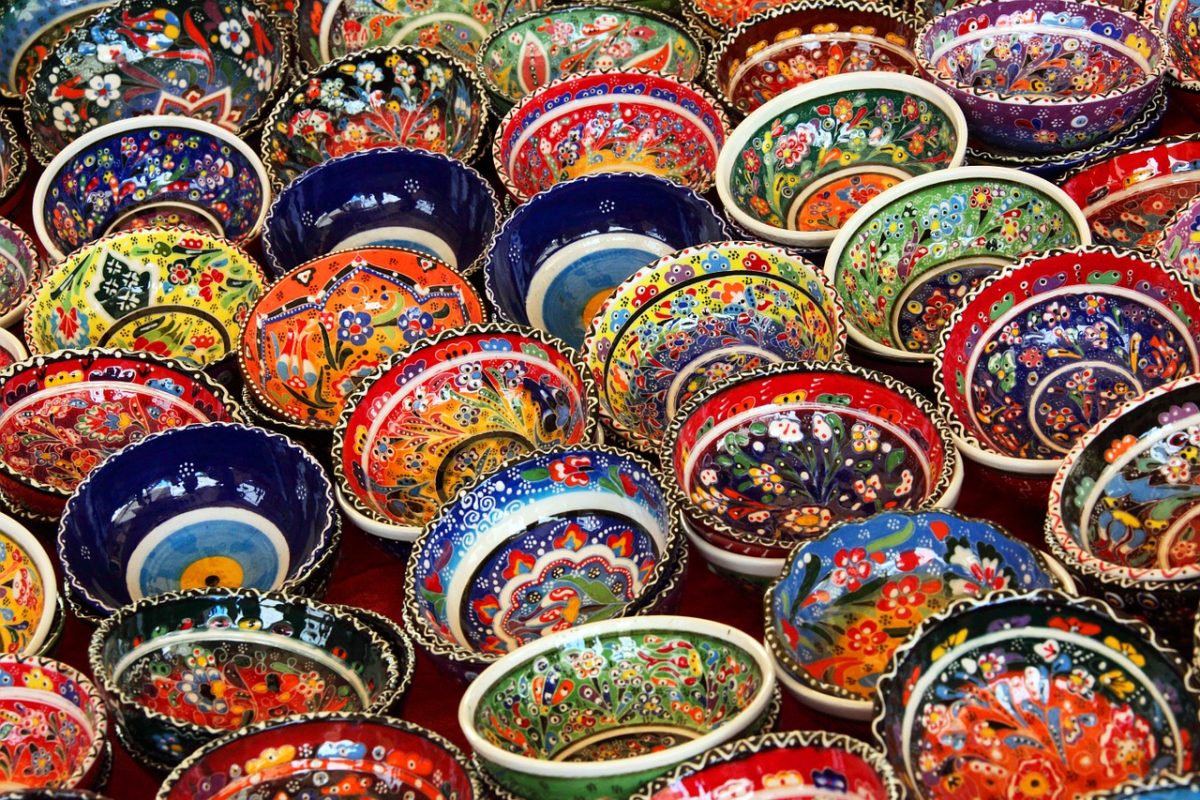 The best things to buy at the Grand Bazaar shops are jewelry, antiques, carpets, and other textiles. There are a few famous shops in the Turkish market with a stellar reputation.

Most locals are well-aware of their fame and will gladly help guide you to these shops. For jewelry, Topkapı Özavar and Timuçin Jewelry are two of the most famous stores with beautiful and rare pieces.

Most of the antique shops are located around İç Bedesten, the historical center. You must find a trustworthy vendor, since it may be hard to see whether a piece is an authentic antique.

One of the best antique shops is Şalabi Antiques with vintage jewelry and items from the Ottoman era. Furthermore, Epoque is another antique shop where you can find vintage rings and pocket watches.

For carpets, a favorite shop is Ethnicon (ethnic plus contemporary). There are hand-woven rugs and kilims. Şengör is another favorite shop to buy carpets from, because of its history.

The same family has owned this shop for 6 generations. When you visit their shop, you may feel like you are going back in time as you browse their rare items from the very early days of the Turkish Republic.

The best textiles to buy in the Grand Bazaar shops are bathrobes, towels, blankets, and scarves. You can find these items around the many shops around the Oruculer Gate.

And of course, there are other small items that are very popular from the Grand Bazaar Shops, like ceramics, lamps, leather goods, spices, and sweets.

How To Navigate The Grand Bazaar 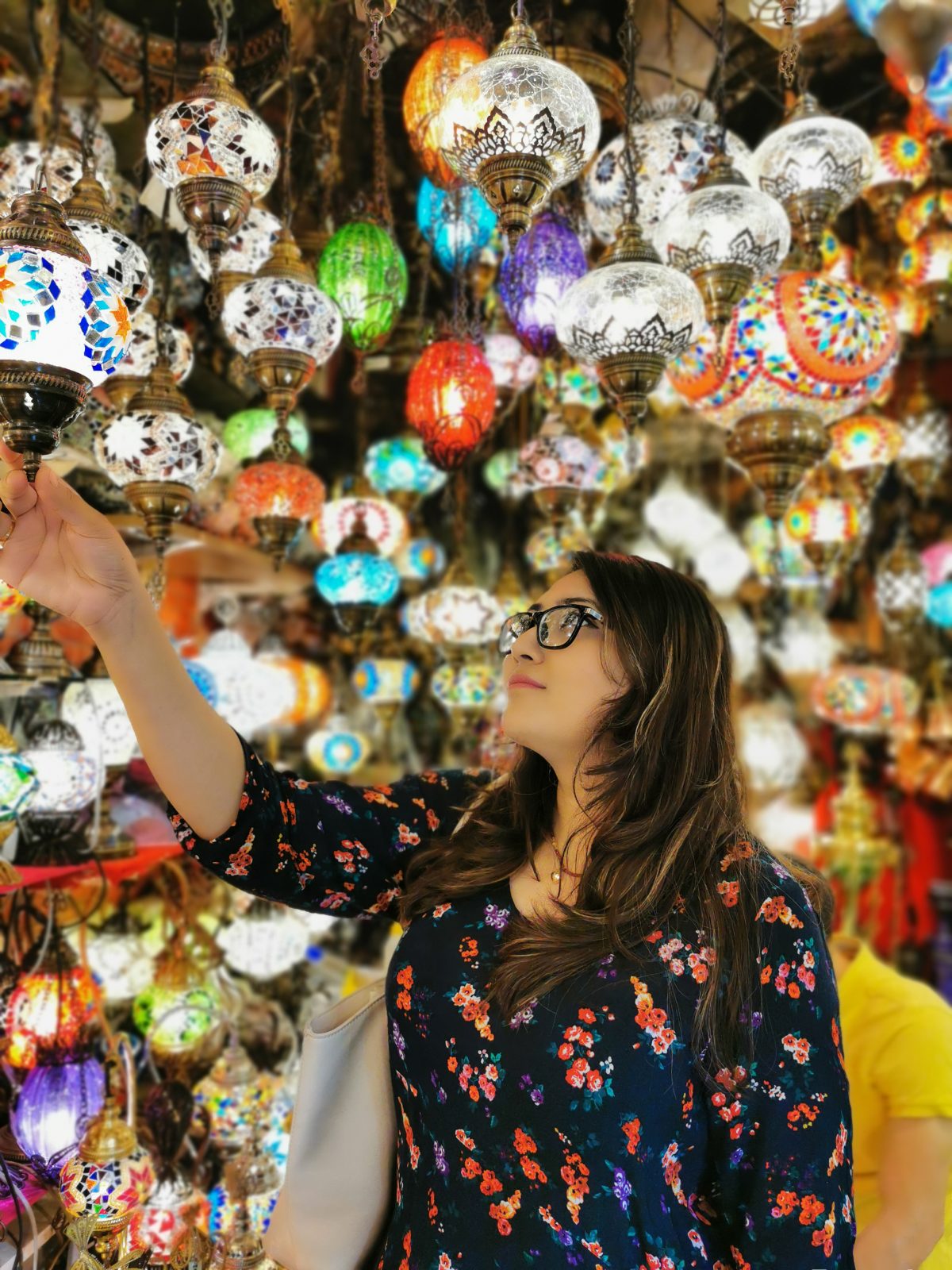 Photo by A6 Reflex on Unsplash

The entire area of the Grand Bazaar is 30,700 square meters. There are over 4000 shops and 60 streets in the Bazaar. There are 22 different entrances to this huge Turkish market, and some gates are well-known for certain products.

For example, the area around the Beyazit Gate is the main area for jewelry. For those on the lookout for a traditional rug from a Turkish market, head to Zincirli Han, located between the Nuruosmaniye Gate and the Mercan Gate.

However, part of the fun is just getting lost among the alleyways and seeing what catches your eye. 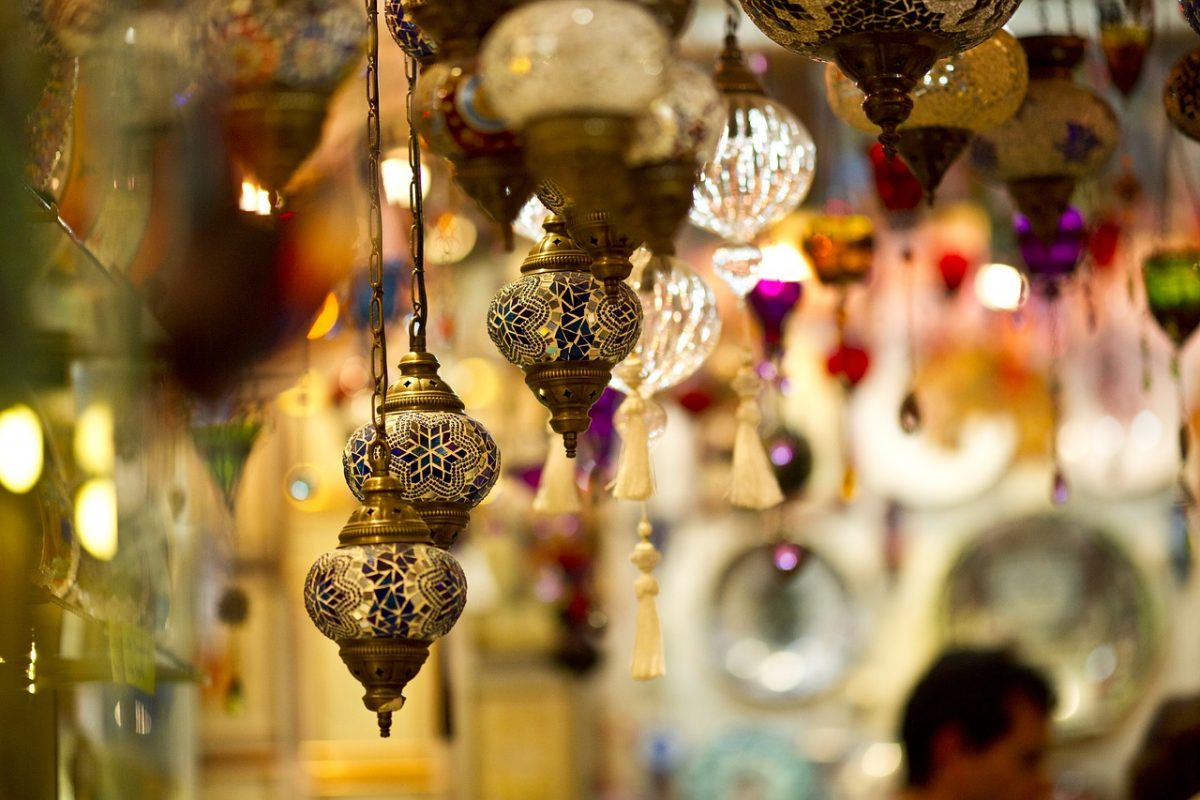 Photo by Engin Akyurt on Pixabay

First and foremost, you should plan for plenty of time at the Grand Bazaar. You should not expect to see it all in one visit. By taking a slower pace, you will be able to soak in the real shopping atmosphere of the Bazaar.

The Turkish market shopping experience is unique in that it is more about building a relationship between the merchant and the buyer. It is not just a simple transaction based on the sticker price.

Most of the merchants are fluent in more than one language and will gladly chat and bargain with the sellers. Since many of the shops in the Bazaar sell similar goods, bargaining and haggling is all part of the game for the merchants.

If you strike up a nice conversation with one of the merchants, you will enjoy your Bazaar experience much more.

However, keep in mind that you are always free to move on without purchasing anything. Even if the merchant offers you a cup of tea, this doesn’t mean you have to commit to buying something.

This is a common custom in Turkey. You may notice that the negotiations seem to intensify as soon as you touch a product on sale.

The merchant assumes that this means they can easily close the deal, and may even get a bit pushy. If you ever feel uncomfortable, always feel free to move on!

Ironically, sometimes the merchants with the most valuable goods are the least aggressive when it comes to selling their goods. They probably know that the value of the items speaks for itself.

The Nearby Royal Palace 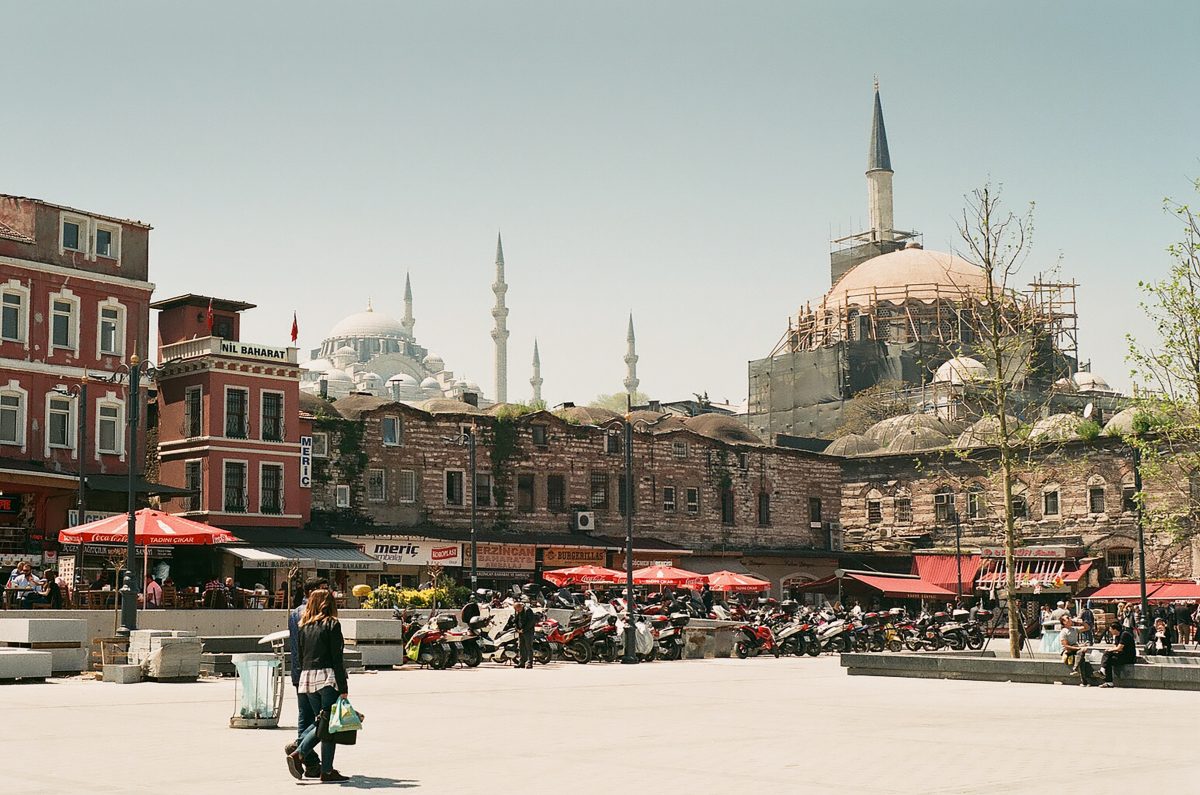 Photo by Svetlana Gumerova on Unsplash

When you have reached your shopping limit, you can emerge from the maze of alleyways and make your way to the nearby Royal Palace, also called the Topkapi Palace.

This well-preserved palace was once the residence for the Ottoman sultans who ruled over Istanbul. In fact, it is the first Ottoman palace built during the Ottoman Empire.

Whichever way you plan to spend your time in Istanbul, the Grand Bazaar is well worth a visit. Once you visit, you will see why some people even choose to come back multiple times during their visit to Istanbul!