For more than four decades, Albania was isolated from the rest of the world. But after the communist regime ended and entries were eased, the country saw a burgeoning tourism. Based on the statistics of Albania’s INSTAT, in 2019, Albania welcomed almost 480,000 more foreign travelers than in 2018. Just as when the numbers are starting to grow, the pandemic puts a halt on the worldwide tourism industry. So, how is the tourism in Albania now?

While the pandemic caused havoc to the rest of the world, Albania is one of the countries that finally reopened its doors for tourism. After gradually opening last June 1, they further eased restrictions by July 1.

According to the U.S. Embassy in Albania, as of now, there are only around 14,000 cases in the entire country with almost 8,000 recoveries. They still practice social distancing and wearing masks in enclosed spaces, but they have already resumed commercial flights and public transportations. In addition, the malls, restaurants, cafes, museums, beaches, cultural and entertainment centers are mow open.

U.S. Citizens are allowed to enter any of the Albanian cities and no negative PCR or Serology COVID-19 Tests are required. But there will be temperature checks at the ports of entry. If your temperature is above 37.5 degrees, you may be denied entry and you will be directed to a quarantine area. Unless you are symptomatic, there are no quarantine protocols that you will need to follow when you arrive in Albania.

You can refer to the other requirements for U.S. Citizens entering Albania for more information. Other than that, you can already pack your bags and plan your perfect Eurotrip! Although we have suggestions on different things to do in Albania, you can also work with either a Travel Advisor or local Travel agent to maximize your vacation and have a convenient journey.

Since Albania is mostly visited for its Adriatic coasts, the peak season is during summer. However, if you want to explore the city comfortably with mild temperatures. The best time to visit Tirana, Albania, is during spring. Aside from the city not yet teeming with tourists, you can also enjoy the sunny days with cool winds. You can either leisurely stroll around Grand Park of Tirana and see verdant spaces blooming with flowers, or you can start visiting the pristine beaches outside Tirana like the Albanian Riviera.

Things to do in Tirana, Albania

With the joint effort of the Albanian government and a non-profit art organization, Qendra Ura or “Center Bridge”, the once atomic bunker of the notorious dictator, Enver Hoxha, was transformed into an art gallery and museum. Here, you will see the actual rooms that will transport you to the communist years. They also constructed additional tunnels that not only gave easier access to the Bunk’Art but also added the eerie atmosphere of Albania’s dark years. Make sure to visit Bunk’Art 2 as well to learn about the secrets of the brutal Sigurumi. 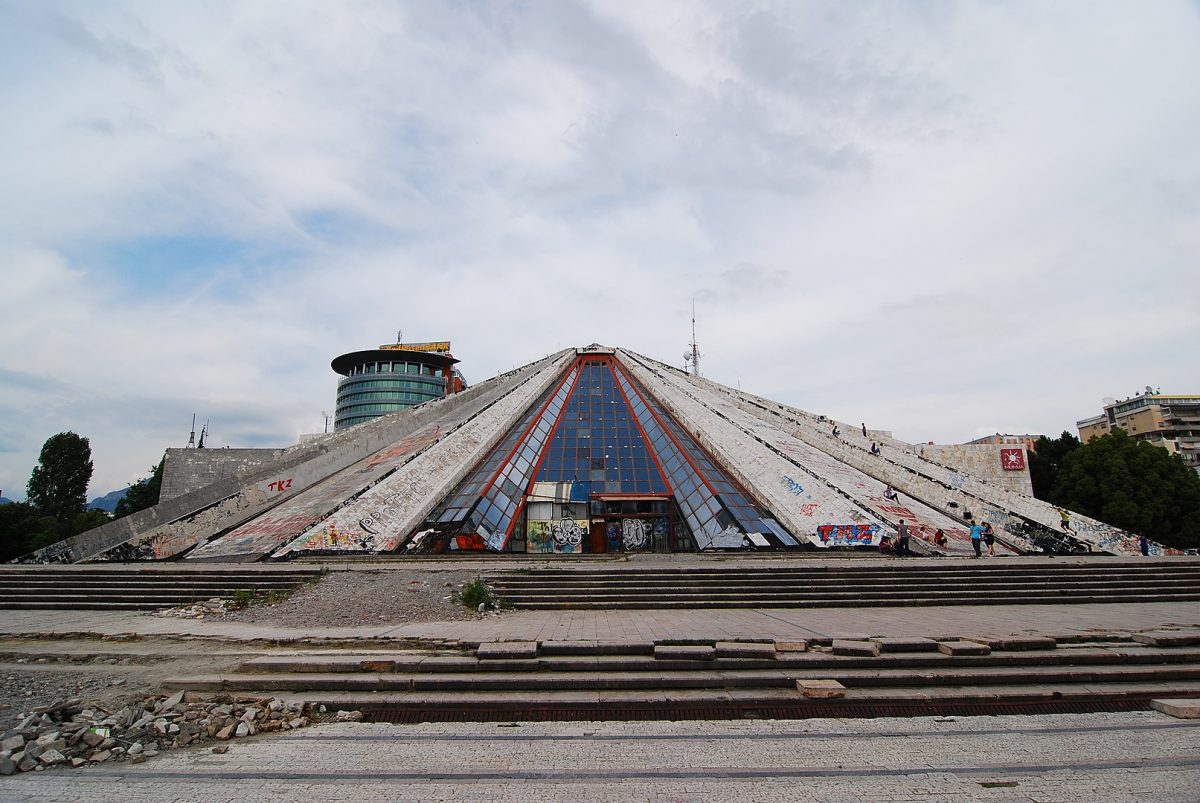 Photo by Basajaun from Wikimedia Commons

Vandalized with graffiti with countless broken windows and grimy walls, it’s quite hard to see how the Piramida is still part of the Albania tourism. But here is why. Originally, the Piramida was built by Pranvera Hoxha and her husband, Klement Kolneci, to immortalize the legacy of her father. However, the once primary symbol of communism ended up dilapidated after years of switching owners. From being a museum in 1988, it eventually became a convention center, then a military staging area, and, finally, a television station in 2002. There were even plans to demolish it. While some want the building gone because of its unpopularity as a symbol of communism, others still want to retain it because of its heritage.

Photo by Tostphoto from Adobe Stock

Named after the Albanian nobleman and national hero, Gjergj Kastrioti, “Skanderbeg” is Kastrioti’s nickname. Skanderbeg Square is also one of the dilapidated public spaces in Albania. With vehicles parking in the square, some of its lush vegetations were destroyed. However, in 2017, it was renovated to a more modernized public space that not only gave an expansive space for pedestrians and underground parking space for vehicles but also brought nature in the heart of Tirana. Today, travelers visit the Skanderbeg Square in the afternoon to watch the beautiful sunset and get a glimpse of the lives of the locals.

4. Learn about the Albanians at the National History Museum 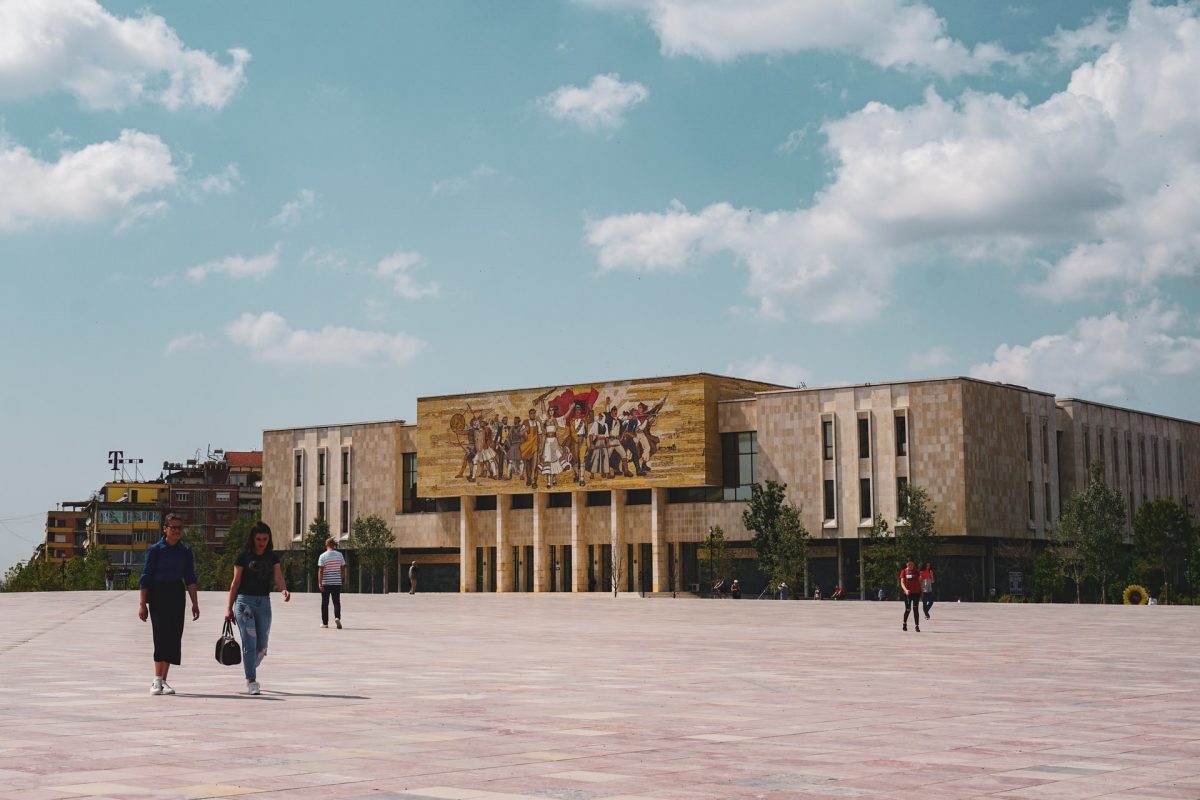 Photo by Douglas O from Unsplash

Tick off another item in your Albania tourism checklist. After visiting the Skanderbeg Square walk towards the National History Museum. This colossal museum houses around 5,000 artifacts collected between the Illyrian Era in the fourth millennium BC to the post-communist era. Here you will see the collections chronologically arranged in a pavilion with information written in English. So, for sure, you will have a great time learning about Albania’s rich history through pictures and artifacts.

5. Marvel at the Et’hem Bey Mosque 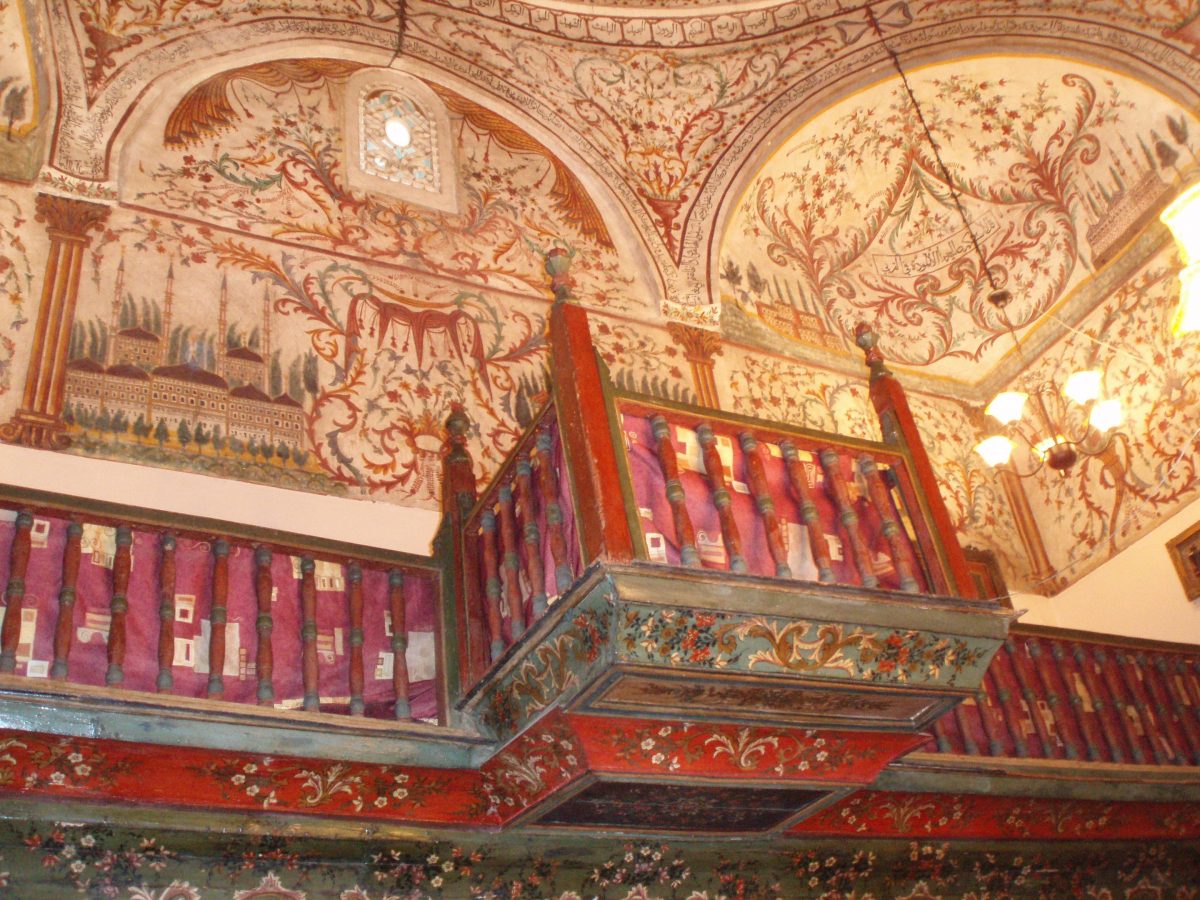 Photo by Brams from Wikimedia Commons

While Albania is the world’s first Atheist country, let’s not forget that they also have a long history of Islamic influence. Another pride of Albania tourism is the Et’hem Bey Mosque. The construction started at the end of the 18th century by Mulla Bey. Then his son, Haxhi Et’hem Bey, completed the building at the beginning of the 19th century. This mosque continues to amaze travelers not only with its intricate frescoes on the walls of the minarets but also as a symbol of the rebirth of religious freedom at the end of communism.

6. Have fun at the Grand Park of Tirana 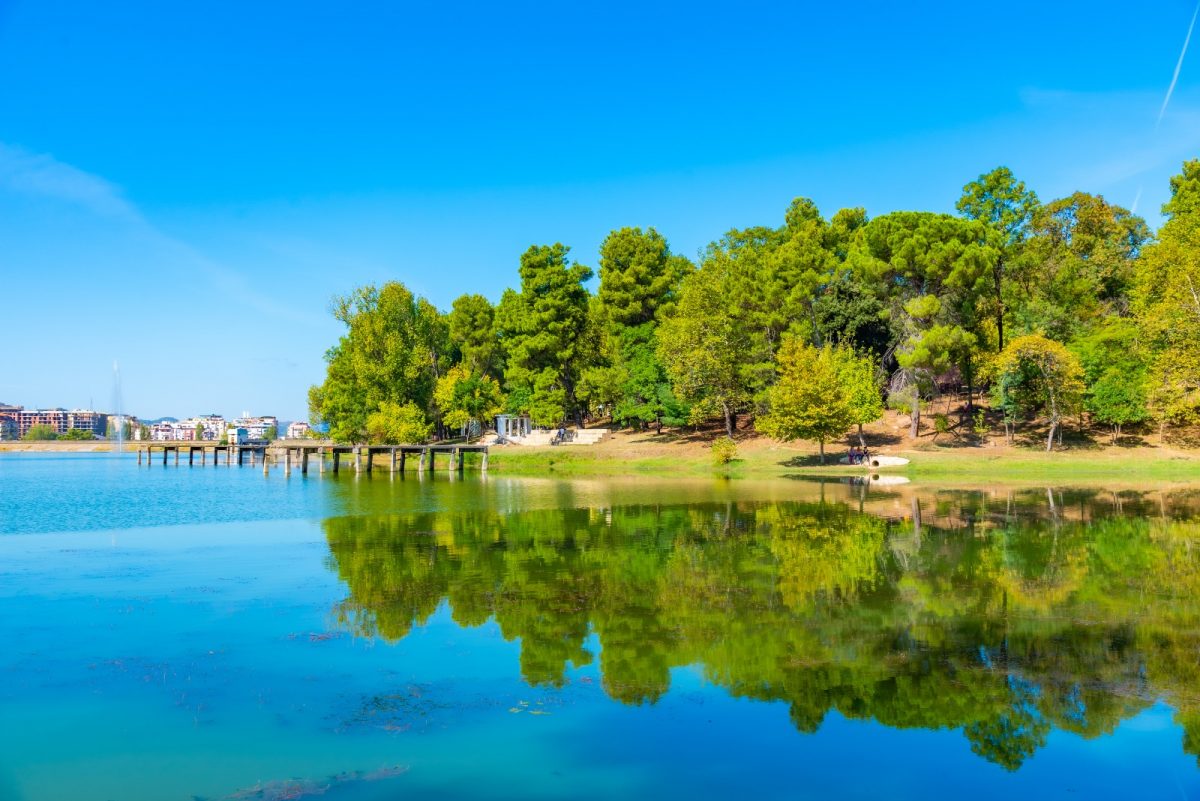 Photo by Dudlajzov from Adobe Stock

The Grand Park of Tirana was not called a “grand park” for nothing. This 289-hectare green space located in one of the Albanian cities is a must-visit in Tirana. You can lay some picnic mats or rent affordable bikes to cycle around the park. Or you can also watch a concert at Tirana Amphitheatre, learn tennis in one of the tennis courts, swim at the Artificial Lake, and dine in at Black Sheep Cafe, among others! 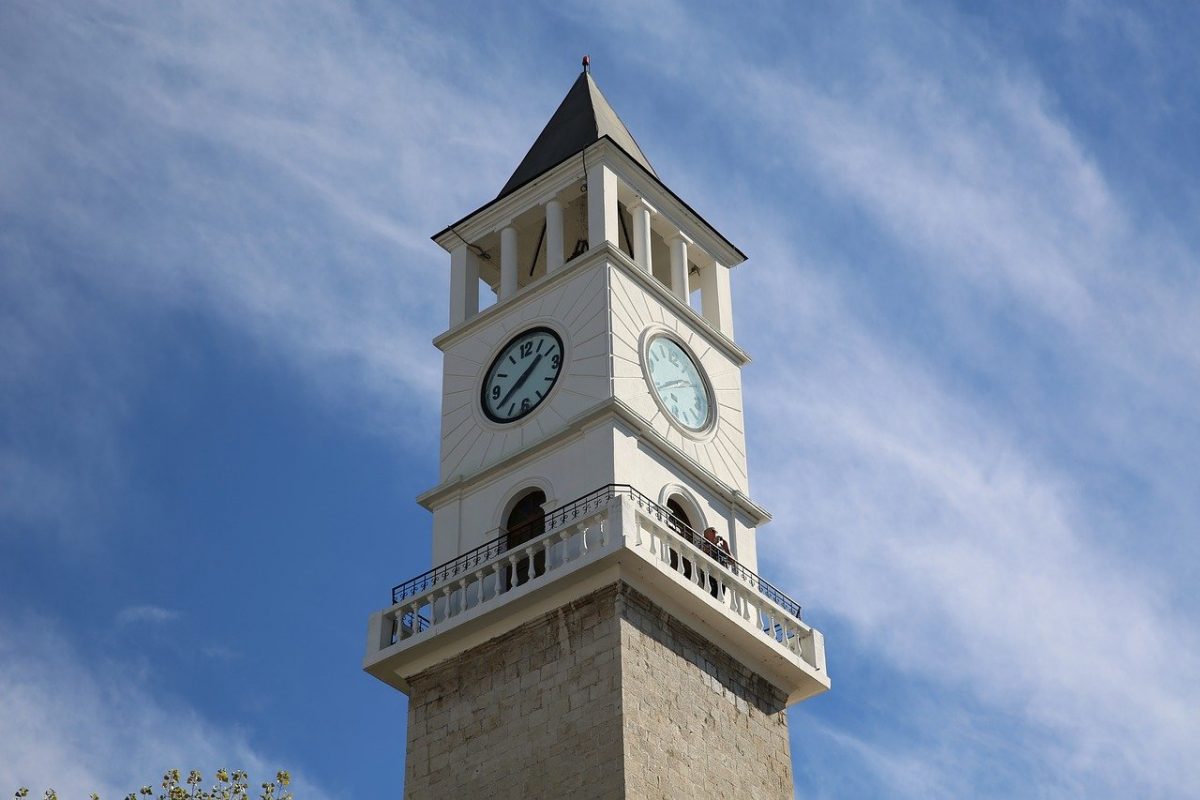 Photo by Ejup Lila from Pixabay

With a towering height of 35 meters, the Clock Tower used to be the highest building in Albania until the 1970s. Originally, it was built in the 19th century, but it was destroyed during World War II. It was then restored and once again became the landmark of Tirana. Together with the nearby Et’hem Bey Mosque, these picturesque landmarks will make you appreciate the intricate Ottoman architecture more. 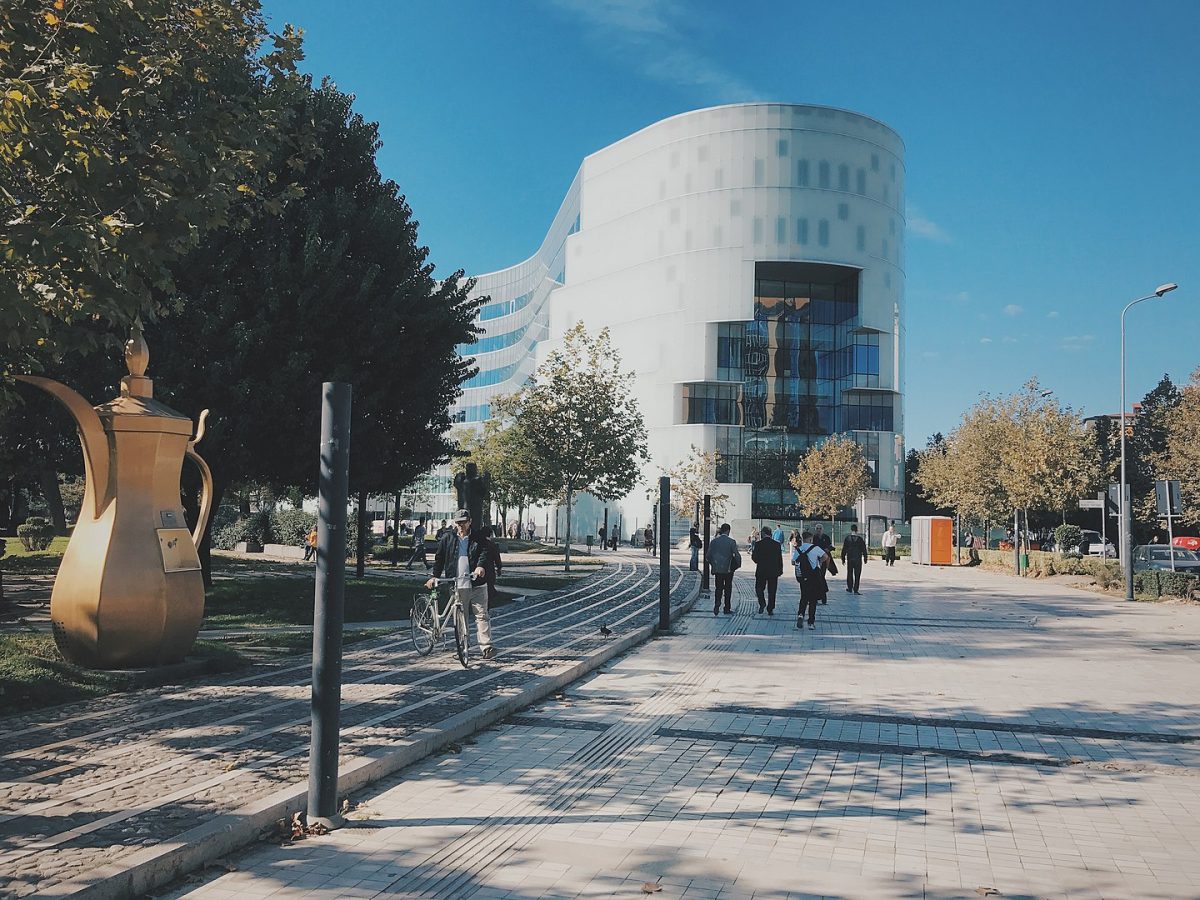 Photo by Kj1595 from Wikipedia

Toptani street is another Albania tourism hotspot. Here, you can see antiquated yet impressive fortresses that serve as a remembrance of noble families darting for a political seat, like the Toptani family. Today, many travelers can enjoy walking along this pedestrian-only street, dining in one of the surrounding restaurants and cafes, and shopping at the Toptani Shopping Center. The streets get usually more packed when the weather in Albania allows trees to become towering shades from the balmy sun.

9. Enjoy some Cocktails at Ish-Blloku District 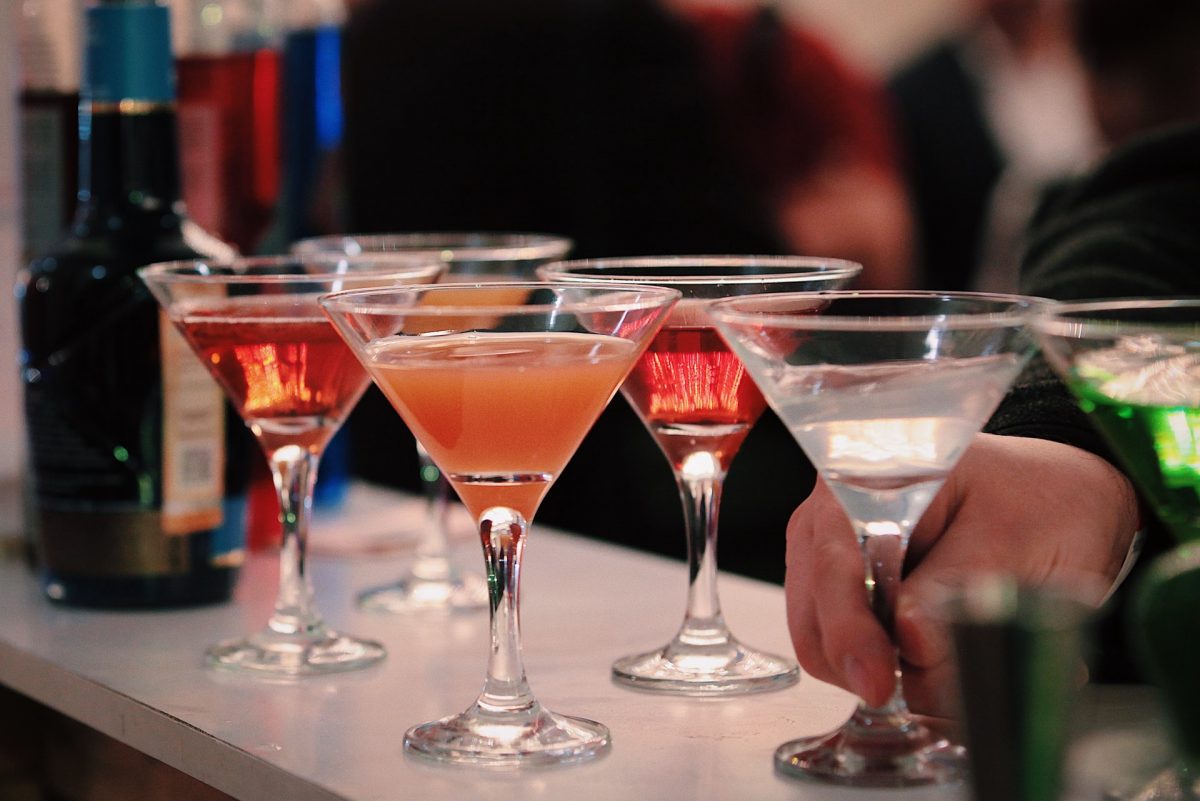 Photo by Maria Avdeeva from Unsplash

Ish-Blloku or former block is one of the top destinations for Albania tourism. Aside from currently being the most expensive area in Tirana, it also used to be an exclusive district for Communist elites. With this, you will see a lot of quirky cafes, upscale restaurants, and even the residence of the vicious Communist leader, Enver Hoxha. Make sure to drop by the Colonial Bar for a wide option of popping cocktails for as low as ALL700 or US$7 per glass. 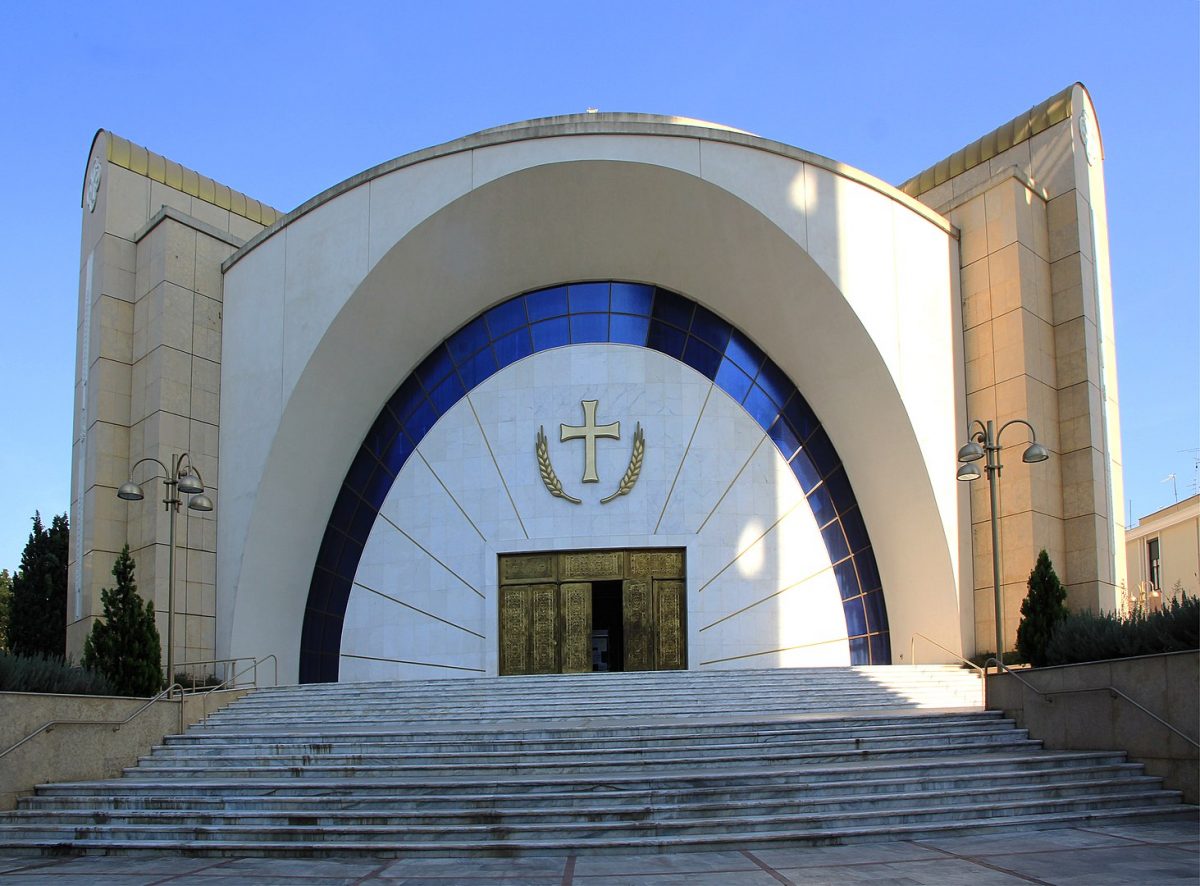 Photo by Karelj from Wikimedia Commons

Hailed as the third largest Orthodox church in the entire Balkans, the Resurrection of Christ Orthodox Cathedral is one of the main landmarks of Albania tourism. This modern designed cathedral has broad marble stairs and gold doors that lead to an overwhelming lofty interior with vigorous wall paintings and a massive dome.

11. Stay at the Tirana International Hotel 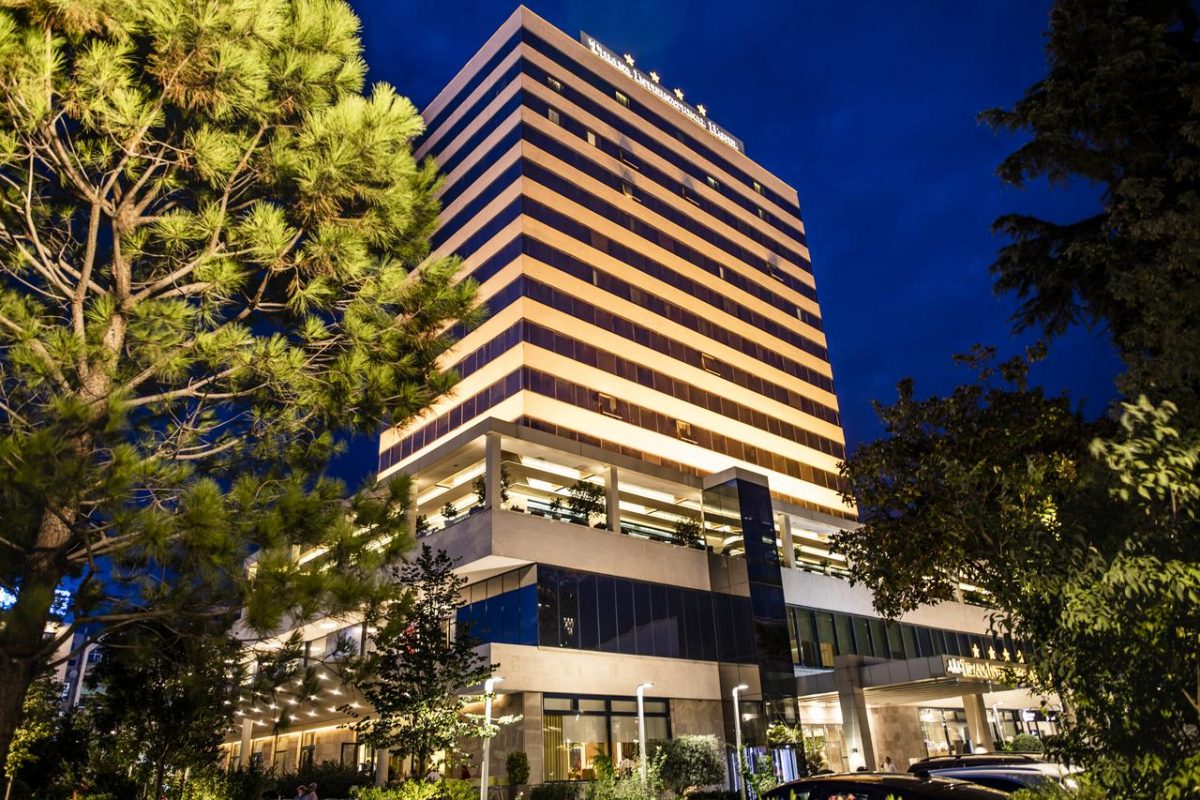 Hotel’s Price per Night: US$88 for two adults

Tirana’s largest hotel, Tirana International Hotel is conveniently located in one of the sides of Skanderbeg Square. Being situated at the center of Tirana, the hotel allows you to get a glimpse of the beautiful tourist destinations right outside your window. Most of all, it has diversely designed rooms with a pleasant interior that will surely reward you with a refreshing slumber after a day’s activities. But if you want to check other hotels, head to the Booking website to get a full list of the best hotels in Tirana.

12. Explore the Palace of Culture 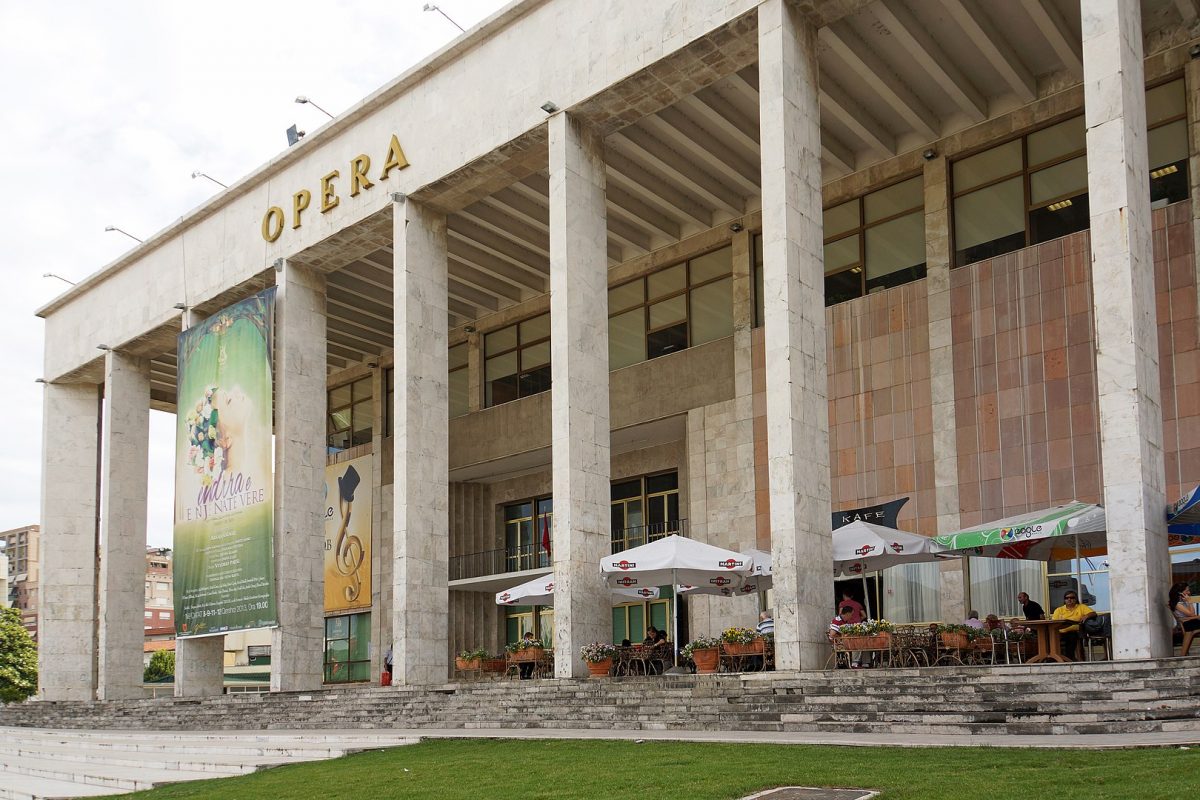 Inside the Palace of Culture, you will find the National Library and National Theater of Opera and Ballet. This building is another pride of the Albania tourism, not only because the former Soviet president, Nikita Hrushov, placed the first brick, but also because it has similar features as the Palace of Congress in Rome and the Finland Station in St. Petersburg. 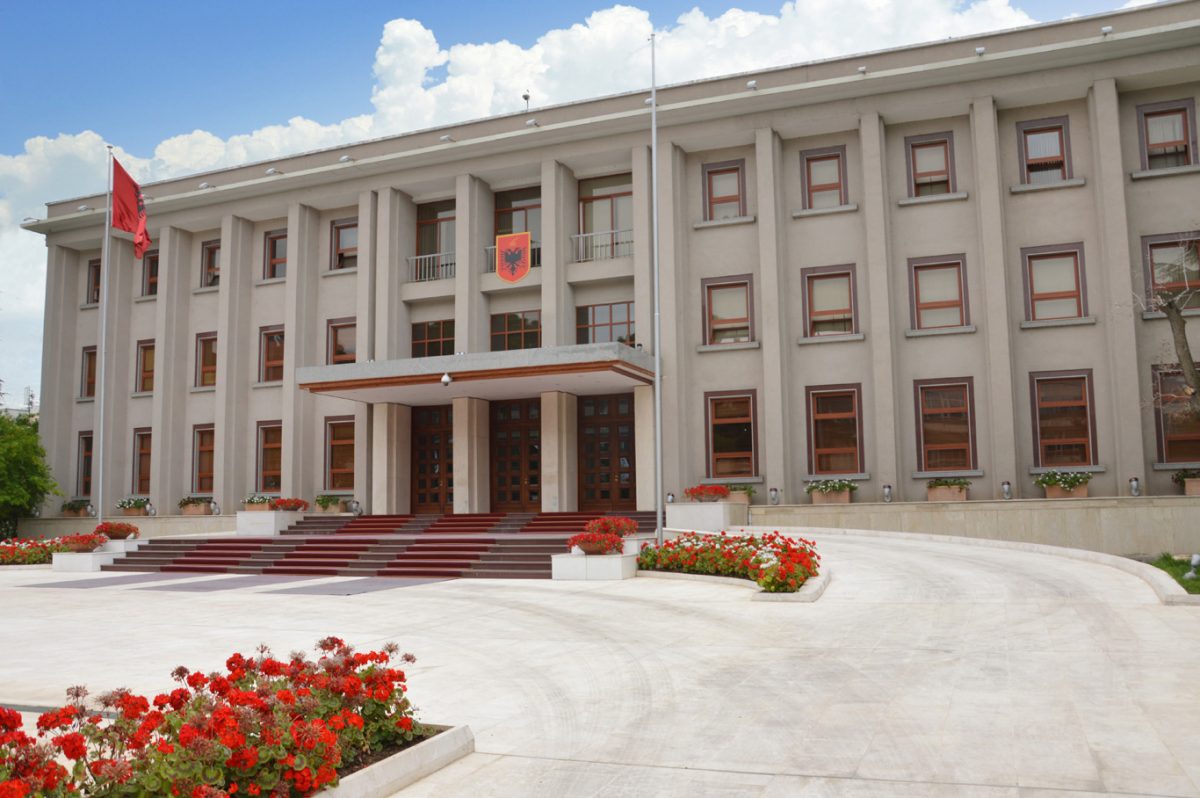 Photo by Ervis.Reci from Wikimedia Commons

Surrounded by lush foliages and mythological sculptures, Pallati I Brigadave or Palace of the Brigades was initially constructed to be the residence of King Zog I’s royal family. However, they already left the country when the palace was done. After a couple of years, it was also used as the residence of Emperor Victor Emmanuel when he visited Albania. Today, the palatial edifice is no longer used as a residence of the head of state, instead, it is only used for official events. Travelers can see the exterior of the palace and explore its expansive garden for free during weekends.

14. Take the Dajti Ekspres to get a Scenic View of Tirana 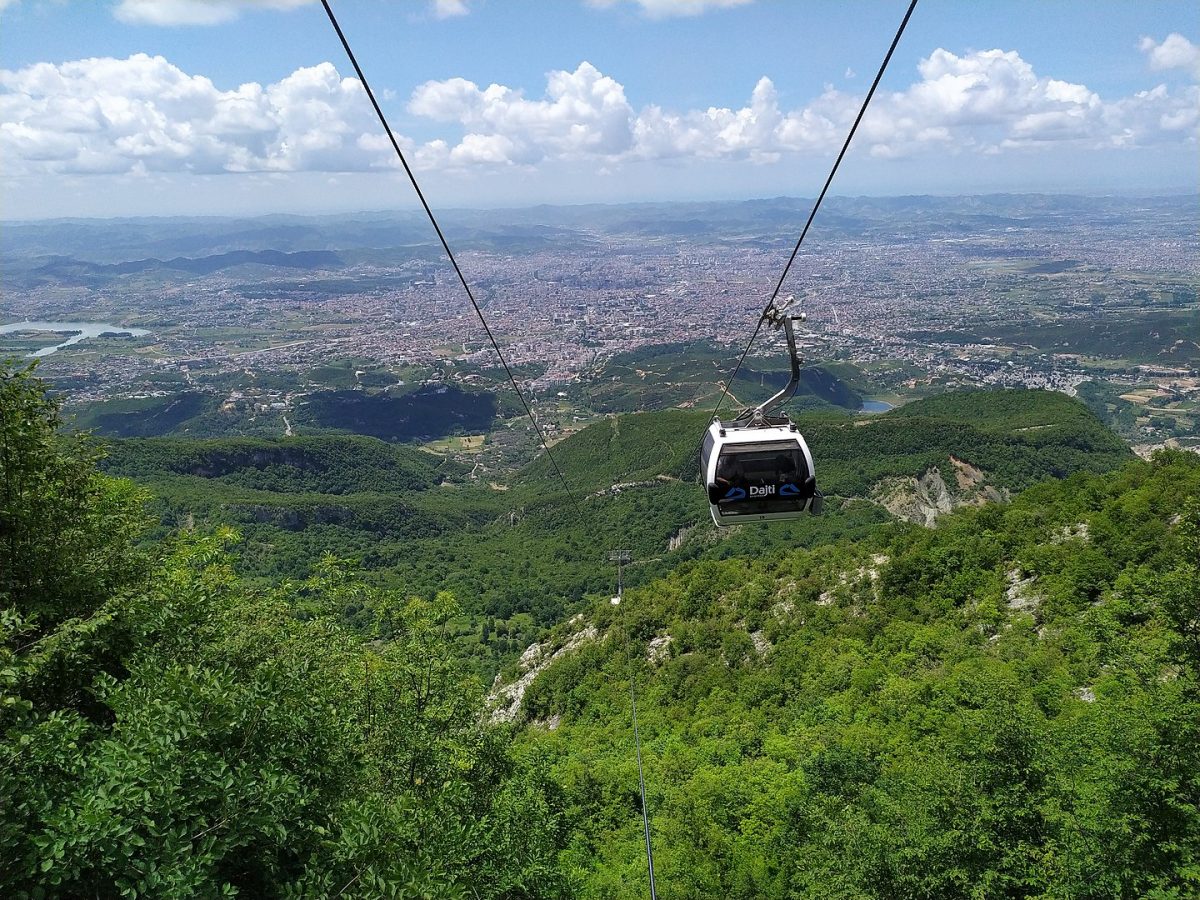 Photo by Leeturtle from Wikimedia Commons

The Dajti Ekspres takes you to an almost 15-minutes of a scenic overview of the Albania tourism sites. From the Dajti mountain, the cable car will take you to Ballkoni Dajtit restaurant and Dajti Belvedere Hotel. On a pleasant day, you can see as far as the coastal city of Durres and the Adriatic Sea while dining at Ballkoni Dajtit restaurant. Also, if you want to appreciate Tirana’s landscape, you can retreat to the Dajti Belvedere Hotel (starts at US$47 per night). They only have 24 cabin-type hotel rooms, so for sure you will have a relaxing night away from the bustling city.

A trip to Europe will never be complete without visiting an art gallery. In Tirana, Albania, you can find the expansive National Art Gallery that showcases both the permanent art collections and occasional art exhibitions of local and foreign artists. After visiting the art gallery, you may also head to the library which houses over 4,200 books, magazines, catalogs, and videotapes about the history and theory of art. It’s free of charge and they are open from Monday to Thursday (8 AM to 4:30 PM) and Friday (8 AM to 2 PM).

For a country that was once isolated, Albania offers some of the most breathtaking tourism destinations in Europe. Looking at how some of its tourist attractions are still in the process of finding its final purpose seems to mirror the country’s effort to adjust to the fast-paced global dynamics. Perhaps, there will be more debates about whether to modernize or bulldoze an edifice. But for sure, its beauty in connection to its past will just be another major driving force in Albania’s tourism.

Tulip Fields in The Netherlands: Everything You Need to Know
Travel Guide