Often called the Star of the Indian Ocean, Mauritius is a paradise surrounded by unspoiled beaches and the relaxing tune of Sega music. Once home to the extinct Dodo bird, Mauritius sits in the middle of the Indian Ocean with Madagascar in the east. It is also home to a wide variety of flora and fauna that are unique to the island.

Throughout the years, this island has been under the rule of the Dutch, the French, and the British. During colonial times, slaves from Africa and laborers from India and China were brought to the island.

With its unique cultural mix and natural beauty, Mauritius might just be the next perfect destination for you. Here are some of the things you could do to turn your stay in Mauritius into an exciting adventure.

Enjoy A Day At the Champ de Mars Racecourse 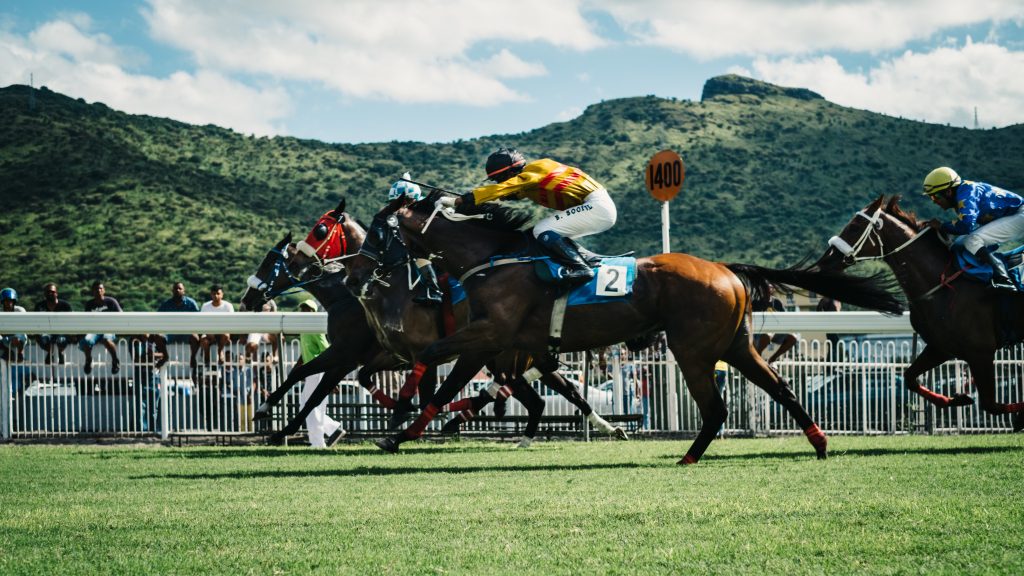 Photo by Simson Petrol on Unsplash

Did you know that horse racing is one of the most popular sports among Mauritians? Now, you can join them cheering on the best jockeys in the country at the Champ de Mars Racecourse.

Located in Port Louis, it’s the oldest racecourse in the southern hemisphere. It’s also the second oldest in the world and has been visited by the likes of Queen Elizabeth II and Prince William. It is also a site where history was made —when Mauritius gained independence from the British in 1968, the official flag ceremony took place here.

The racing season in Mauritius is from March to December. During that period, the Champ de Mars Racecourse attracts numerous visitors from families to racing fanatics. Everyone is welcome to join in the fun! 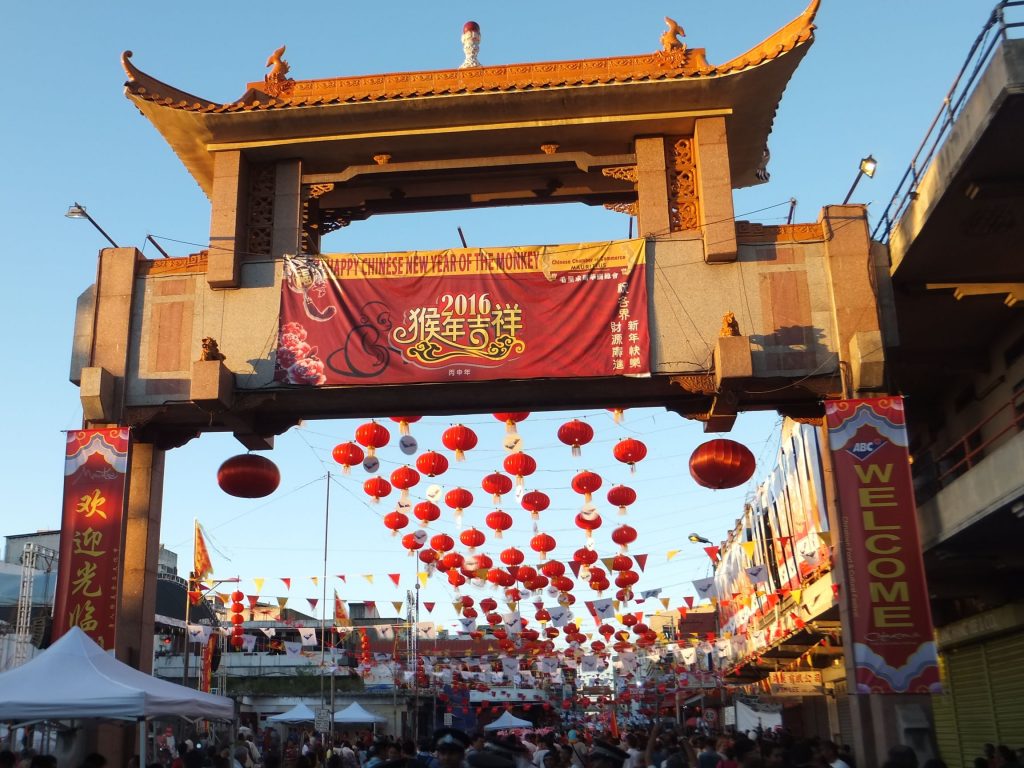 With its landmark pagoda, Mauritius’ Chinatown is one of the very few Chinatowns left in Africa. Located in Port Louis, this place was founded in 1944 by Chinese laborers who were brought to Mauritius by the British.

Today, the area is full of Chinese restaurants and grocery stores where visitors can both dine and shop. There is also an annual Chinese Food and Cultural Festival held here every April. It brings together Mauritians and tourists from all walks of life to join in the festivities.

Explore The Island Of Rodrigues 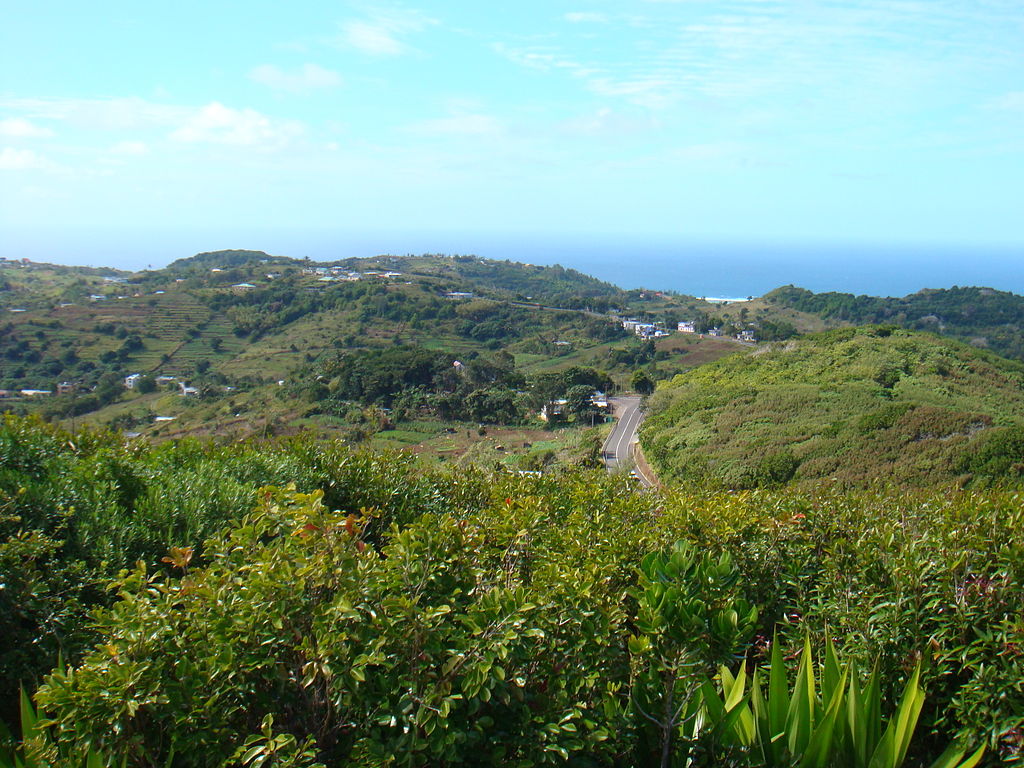 Photo by Shoestring on Wikimedia Commons

Did you know that Mauritius is not just made up of one island but many?

Rodrigues, one of Mauritius’ many islands, is a mystery waiting to be explored. This volcanic island is home to many endangered species such as the Rodrigues flying fox and the Rodrigues warbler. Visitors can fly via Air Mauritius from Port Louis to the island’s Sir Gaëtan Duval Airport.

Once there, visitors can buy handicraft items and interact with the giant tortoises found in the Francois Leguat Giant Tortoise and Cave Reserve. Also, by reaching the top of the Rodrigues’s peak, Mont Limon, visitors can get an incredible view of the entire island. 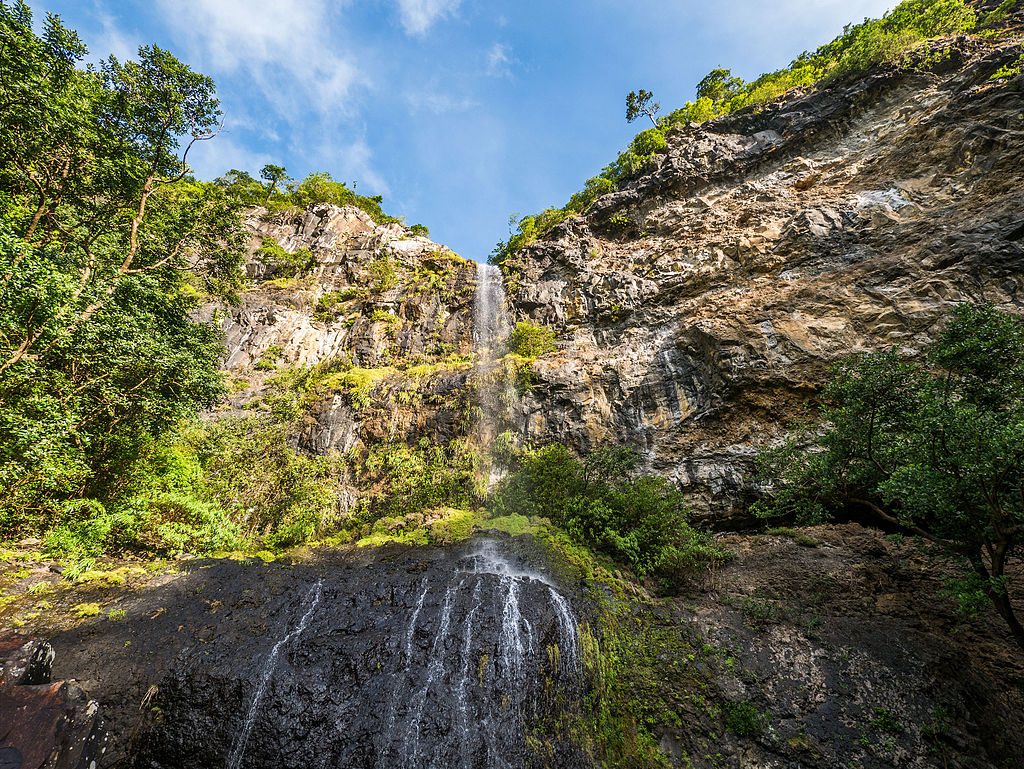 Located in the southeastern area of Mauritius, Black River Gorges National Park offers nature lovers a chance to explore the island’s untouched surroundings. Protected by the Mauritian Wildlife Foundation, the park is home to several endangered species such as the pink pigeon and the Mauritius parakeet.

Visitors can either walk or drive at their leisure and find several plants and animal species along the way. A visit to the National Park won’t be complete without passing by Piton de la Petite Rivière Noire or the Black River Mountain peak. On the outskirts of the park, the Tamarind Falls stand majestic. The falls are also surrounded by lush greenery and are the perfect backdrop for family photographs and selfies.

For more information about this natural wonder, check out our guide to the Black River Gorges National Park here.

Witness The Beauty Of The Seven Coloured Earths 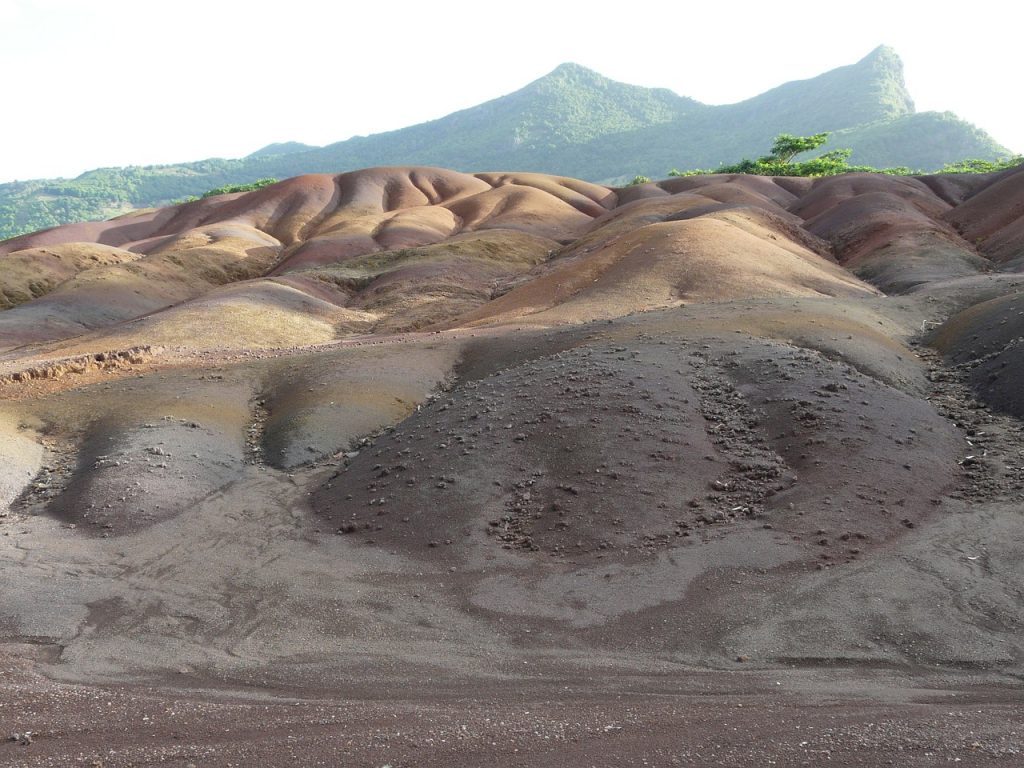 Photo by bigfoot from Pixabay

If there is something very unique to Mauritius, it would have to be the Seven Coloured Earths. This fascinating site is a cluster of sand dunes of different colors, ranging from red to green to purple. These unusual colors are due to the traces of iron and aluminum in the soil.

Because of its unique appearance, the Seven Coloured Earths is a must-see for everyone who visits Mauritius. In addition, there are also gift shops nearby, selling jars of the colored sand to bring a piece of the place with you.

Enter The Maison Eureka For A Trip Back In Time 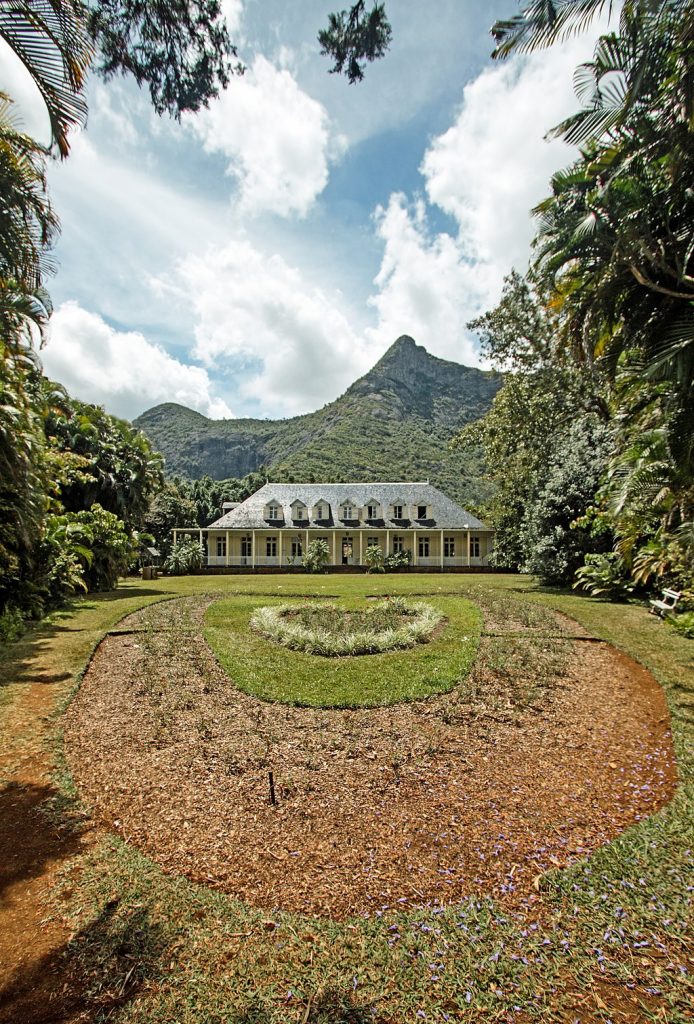 The Maison Eureka is a historical building from the colonial era of Mauritius. It has since been converted into a museum and is now open to the public. With its creole design, the mansion was owned by both French and British colonial settlers.

It’s also one of the largest properties in Mauritius with its 109 windows and doors. With a mix of local plant life such as palm and mango trees, the English-style garden may just bring you the peace that you need. Antique pieces, art, and maps are now on display in different sections of the house for public viewing.

There is also a restaurant and a gift shop that sells Mauritian tea and exotic jewelry.  Aside from that, the surrounding area is a visual treat for nature lovers. With several plant species and waterfalls around, this place is nothing short of breathtaking.

Pay A Visit To The Mauritius Glass Gallery 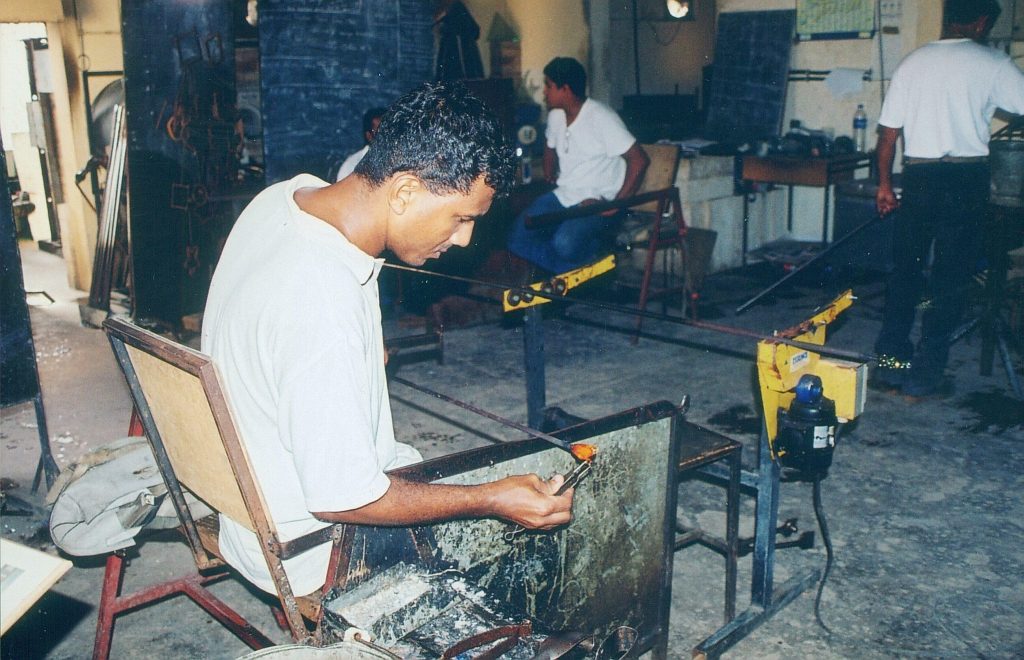 Located in the town of Vacoas-Phoenix, The Mauritius Glass Gallery is where glass artists come together to create works of art using glass waste. The gallery was founded in 1991 in an effort to protect the environment by reusing unused glass.

One of the gallery’s key features is the Hands of Fame which consists of handprints of celebrities from all over the world. Visitors can also get their handprints and footprints turned into glass sculptures.

In addition, the gallery’s gift shop sells handcrafted trinkets made by the artists themselves. Visitors can even ask for customized souvenirs — though production would take about three days.

Watch Out For Big Cats At Casela Park 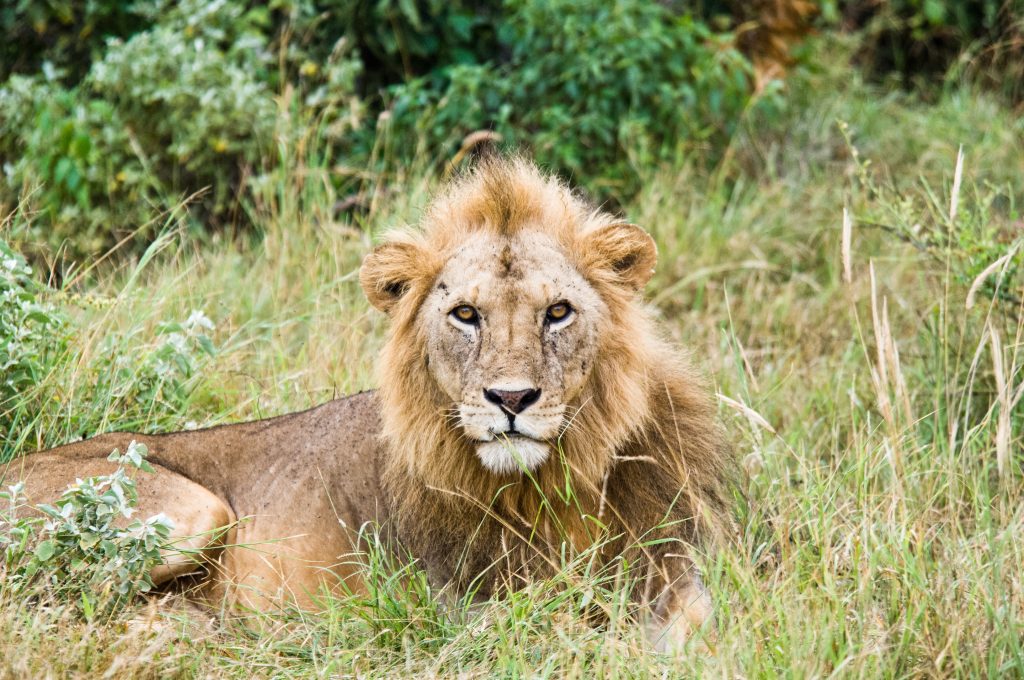 Photo by Florian Berger on Unsplash

Are you in the mood for a lazy Safari? Mauritius’ Casela Park is home to several big cats brought to the island from Asia and Africa. While in the vehicle, you can witness Bengal tigers, caracals, and lions, running, sleeping, and feeding in their natural habitat.

Once the safari is over, you can head over to Casela Park’s other attractions such as the Monkey Kingdom where you can watch long-tailed monkeys skipping about and swinging from branch to branch or the Avalanche Mines where you can ride the first toboggan slide in Mauritius.

Get Up And Close With Dolphins 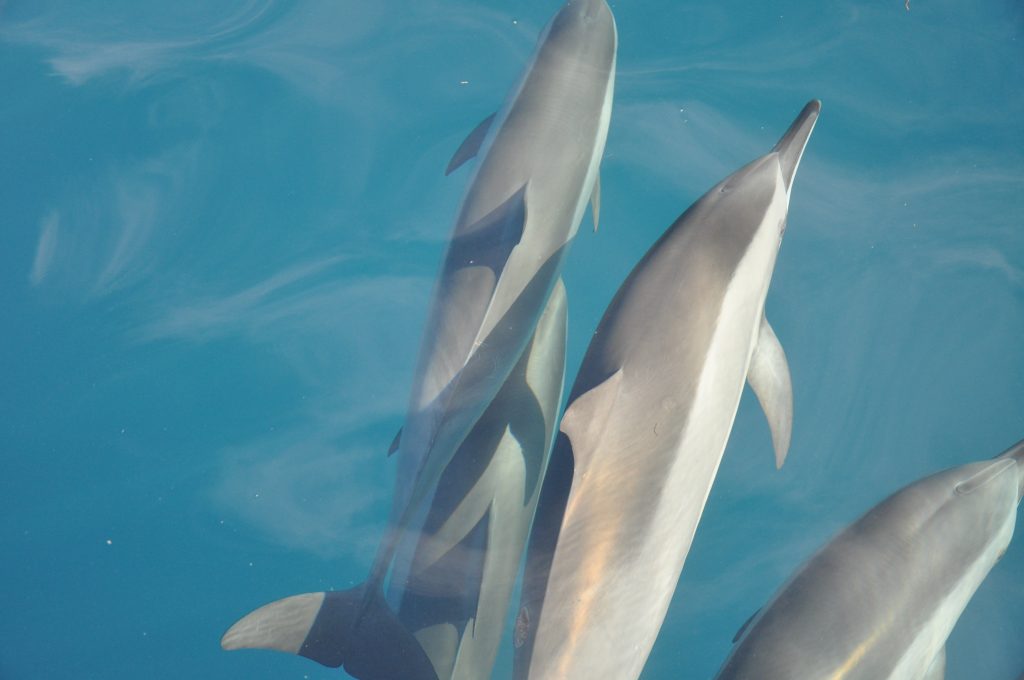 Photo by Sebastien on Unsplash

Just off the coast of the Le Morne Peninsula, one can spot wild dolphins swimming by near the shores. Two species are native to these Mauritian beaches — the bottlenose and the spinner dolphins.

Visitors can enjoy a two-hour interaction with the dolphins. Before that, tourists will be briefed on the behavioral patterns of these intelligent animals. The program also provides a ride to the dolphins on a speedboat, and snorkeling gear is included free of charge.

Have Fun With Whale Watching 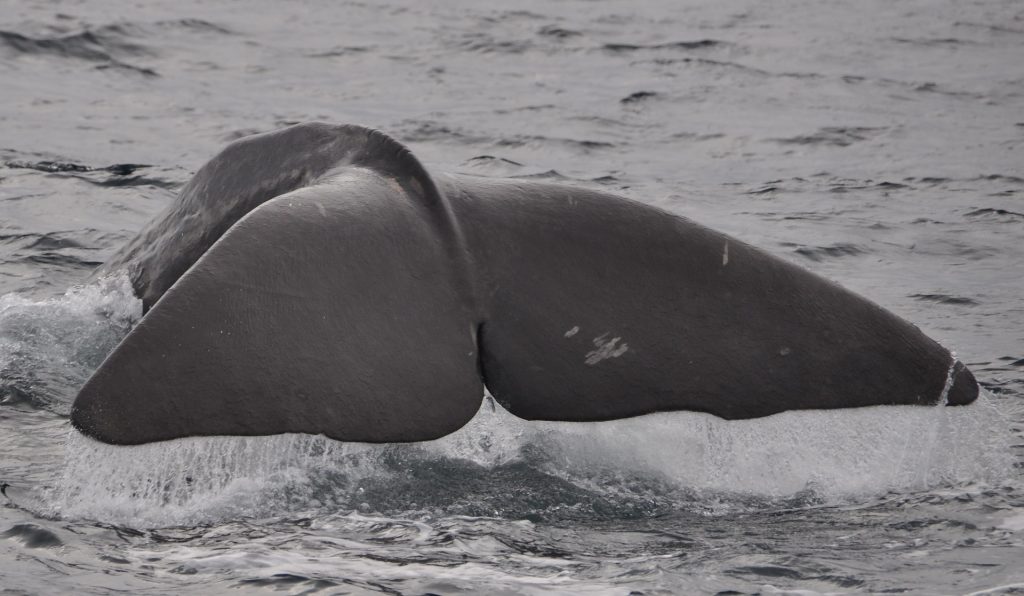 Photo by Jörg Petersen from Pixabay

Looking for something bigger than dolphins? At Mauritius’ West Coast in the village of Tamarin, tourists can take a 3-hour boat trip to watch whales glide serenely along with the boat. 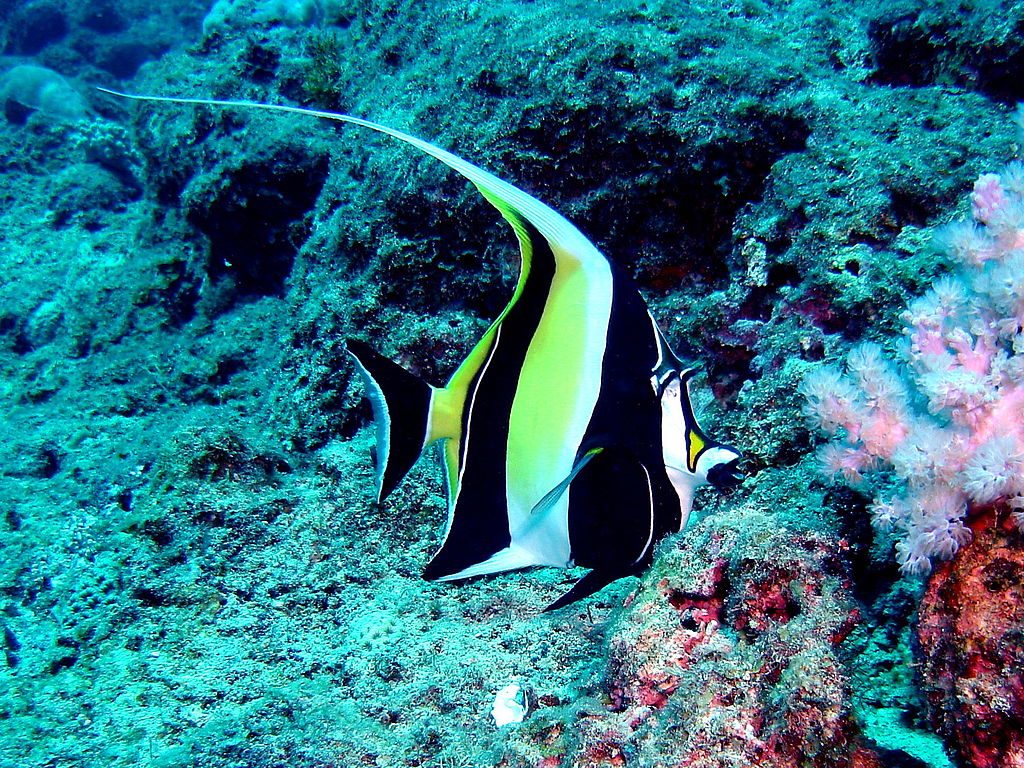 Ready for an underwater adventure that you’ll never forget? Snorkeling at the Blue Bay Marine Park and Pointe aux Piments will be an experience to remember.

Blue Bay Marine Park has crystal clear waters where you can spot a variety of marine life such as clownfish to angelfish and a lot of coral and seagrass. On the other hand, Pointe aux Piments is a protected coral reef where you can spot schools of sea turtles swimming your way. 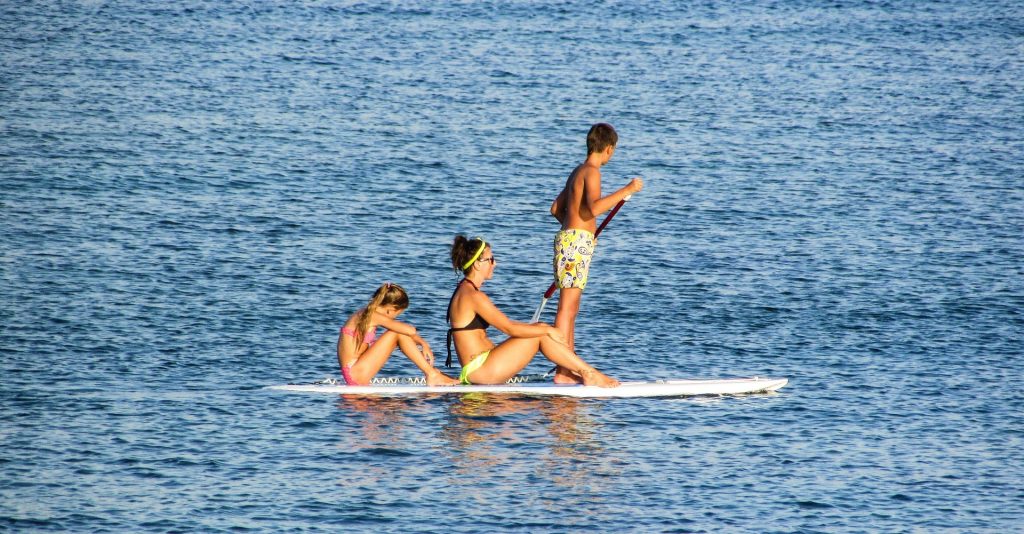 Photo by Dimitris Vetsikas from Pixabay

Looking for something fun but also relaxing? Take up stand-up paddleboarding at Mont Choisy Beach, one of Mauritius’ most beautiful and longest beaches. While paddling, you can watch schools of fish swim beneath the crystal clear waters.

Sitting and lying on the board is also fine if paddling wears you out. When you’re done, you can lay down and admire its powdery white sand and deep blue waters. 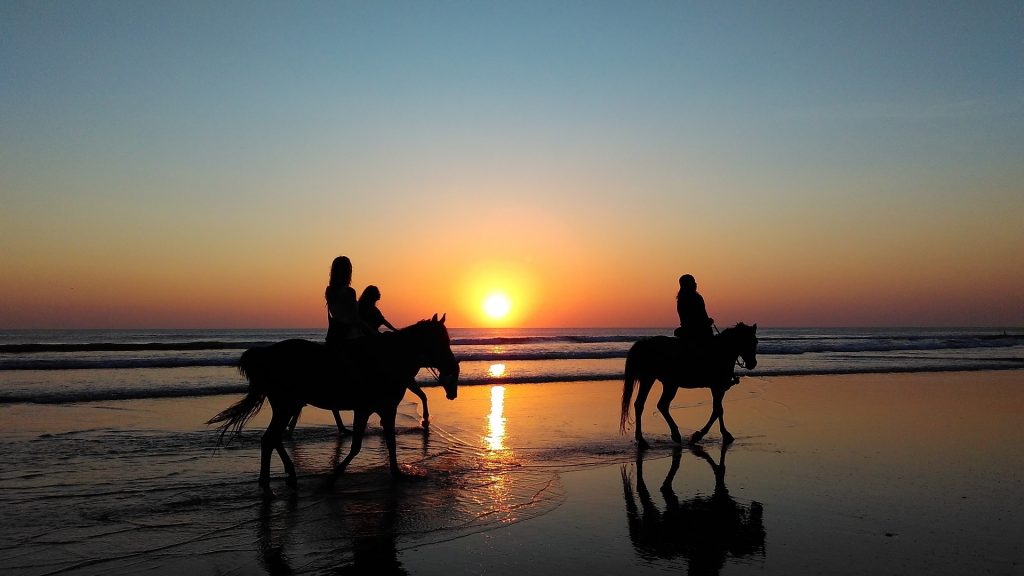 Photo by Free-Photos from Pixabay

Looking for something romantic to do with your significant other? Take a horse ride along Riambel Beach on Mauritius’ southern coast during the sunset. It’s the perfect way to end the day! The beautiful scenery alone is a sight for sore eyes. Horse trainers will help guide you through a scenic route as the sun sets behind you. In addition, you also have the option of swimming in the ocean with the horses themselves.

Riambel Beach is also perfect for those looking for some solitude. This isolated beach has no stalls or crowds to ruin its picturesque beauty.

Take A Ride On A Helicopter To View The Underwater Waterfalls 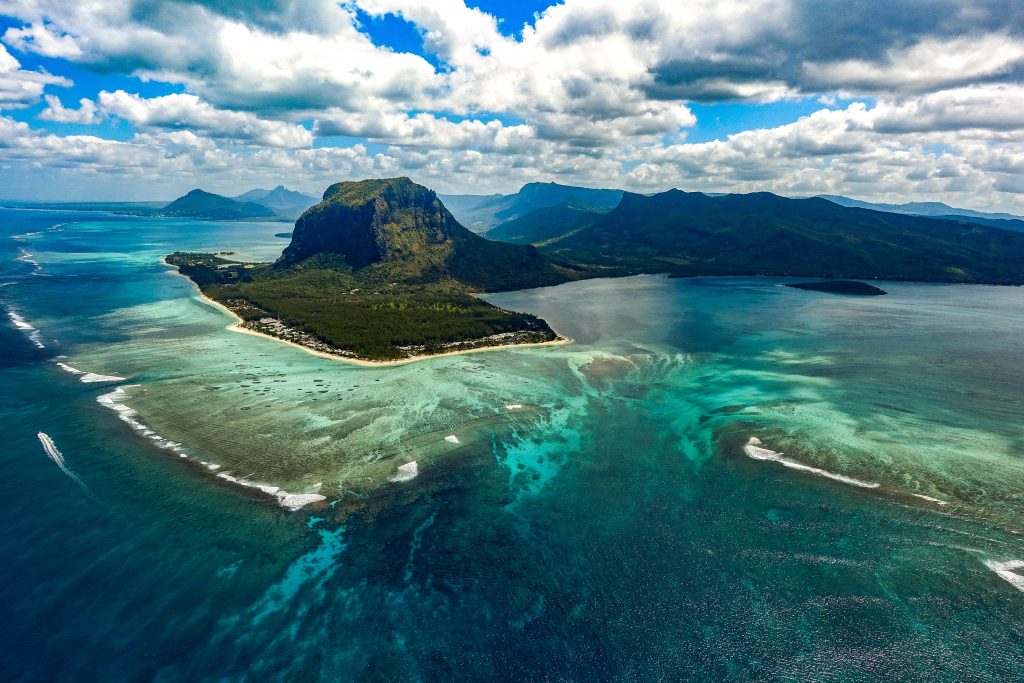 Photo by Xavier Coiffic on Unsplash

A natural phenomenon known as an underwater waterfall is the main attraction in the southwestern part of Mauritius. Strong underwater currents cause sand movements to create the illusion and the vibrant colors. The movements also create a vibrant sight with colors ranging from blue to green.

The best way to view this fascinating phenomenon is to take a helicopter ride. The Mauritius International Airport provides helicopter tours as well as any of the helipads located around Mauritius. Once you’re high up in the air around the destination, you’ll be able to witness the underwater waterfall. In addition, the tour also showcases other scenic views around the area such as mountain ranges and sugar cane plantations.

Skydive Off A Plane 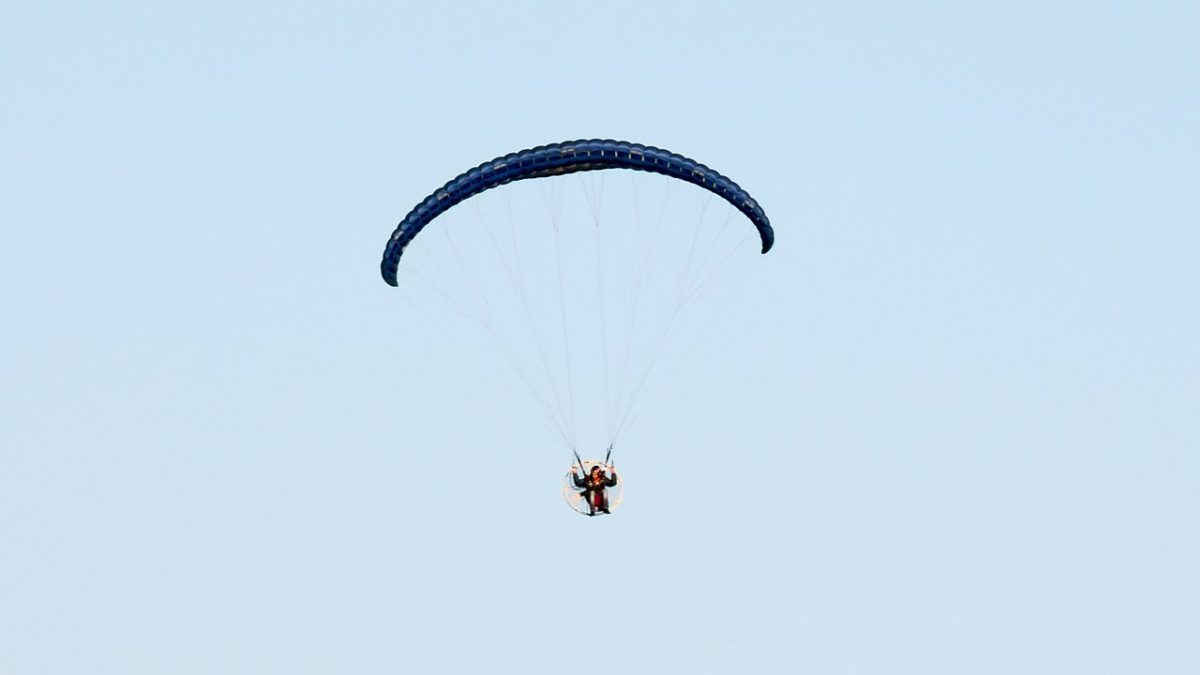 Photo by Webysther on Wikimedia Commons

Have you ever wanted to check skydiving off your bucket list? Now’s your chance! Based somewhere in the northeastern area of the island, Skydive Mauritius offers the thrill of a lifetime.

The place promises a safe and fun skydiving experience! So, if you’re up for it, Skydive Mauritius is only a 30-minute ride from the capital. Be warned though. This activity is not for the faint of heart!

Let Your Children Run Wild At The Kids Adventure Park 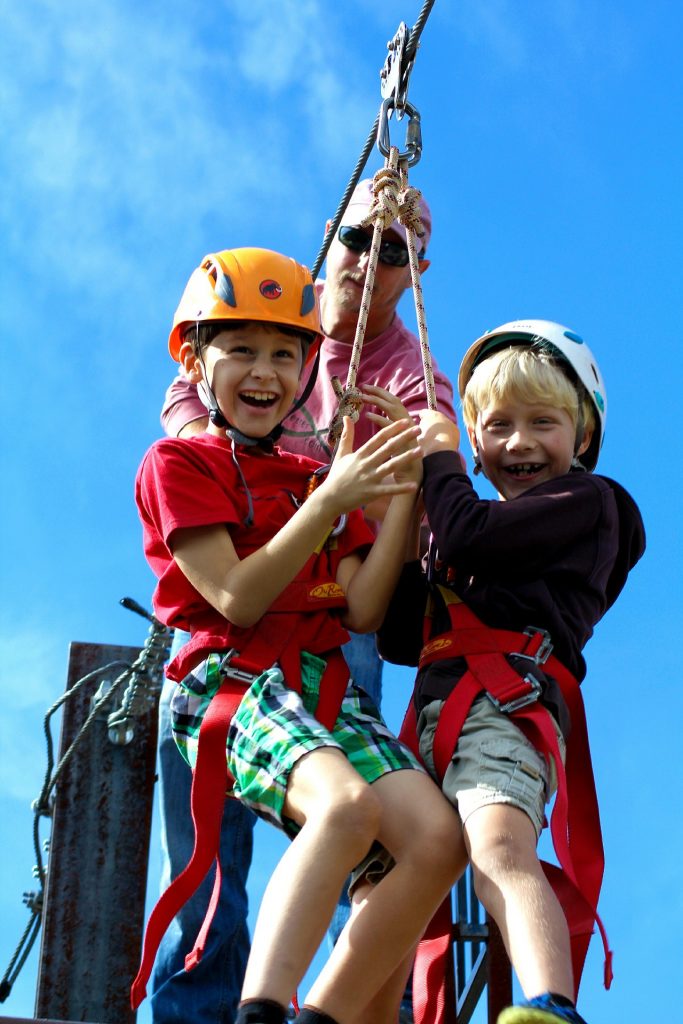 Photo by White77 from Pixabay

If you want your children to have fun in a safe area, there is only one place to go — the Kids Adventure Park!

Located on Mauritius’ east coast, this fun park provides a safe space for children of all ages to have fun. Attractions in this place include trampolines, jungle gyms, and go-kart racing. The children will be under the watchful eye of trained staff.

For adults, this park also includes activities such as horse riding and quad biking. So, there’s definitely something for everyone!

Go For Something More Unconventional With DodoQuest 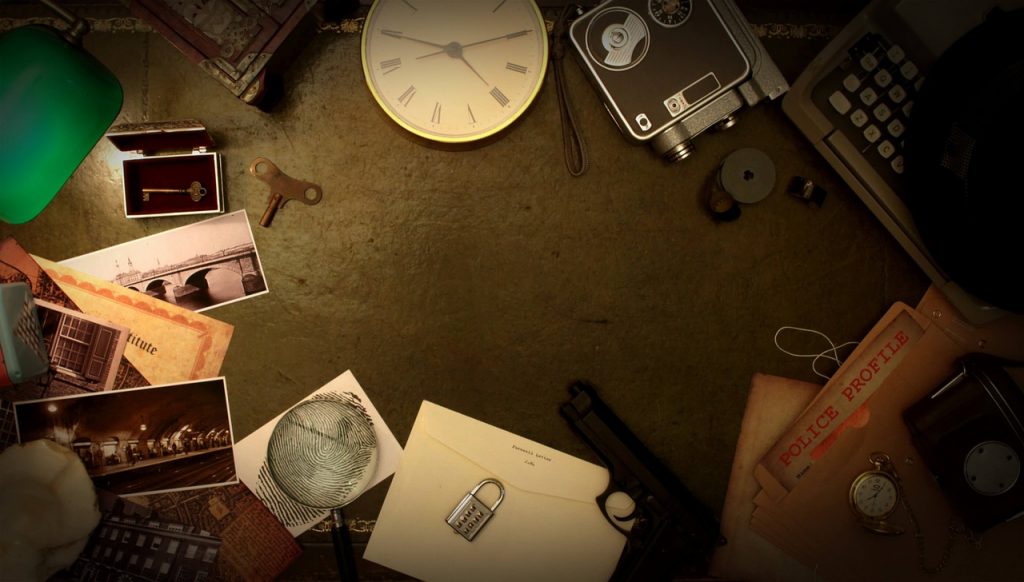 Photo by Clockedin from Pixabay

Ready for some mind games?

Situated in the village of Moka, Dodo Quest is a kind of adventure activity unlike any other. In the game, players must escape by solving the puzzles in one of five game rooms. For example, one involves traveling back to 18th-century Mauritius while another involves trying to save the last Dodo bird.

These games come with a story, interactive objects, and surround sound to make things more authentic. Organizers will also thoroughly explain the rules before the start of every adventure. Also, you don’t have to worry about not completing the game. The escape doors will open when the game is unfinished after 59 minutes.

If you’re planning a holiday to Mauritius, tryout and include these activities in your itinerary for the complete Mauritian experience!