Located 150 miles south of mainland Florida, Key West is the state’s southernmost point. This vibrant city is known for its conch-style architecture and beautiful sunsets which draws tourists from the United States of America (USA) and other parts of the world. Nonetheless, there are plenty of other things that Key West has to offer too.

For starters, the city boasts a thriving cultural and arts scene. After all, it’s the hometown of the famed author, Ernest Hemingway. Partygoers and beachgoers alike flock to this island city to enjoy the nightlife (by the beach) or simply spend a relaxing afternoon by the pier. So, whether you’re here for the clubs or for a peaceful getaway, Key West has something for everyone. We’ve rounded up the top things to do in Key West, Florida just for you. 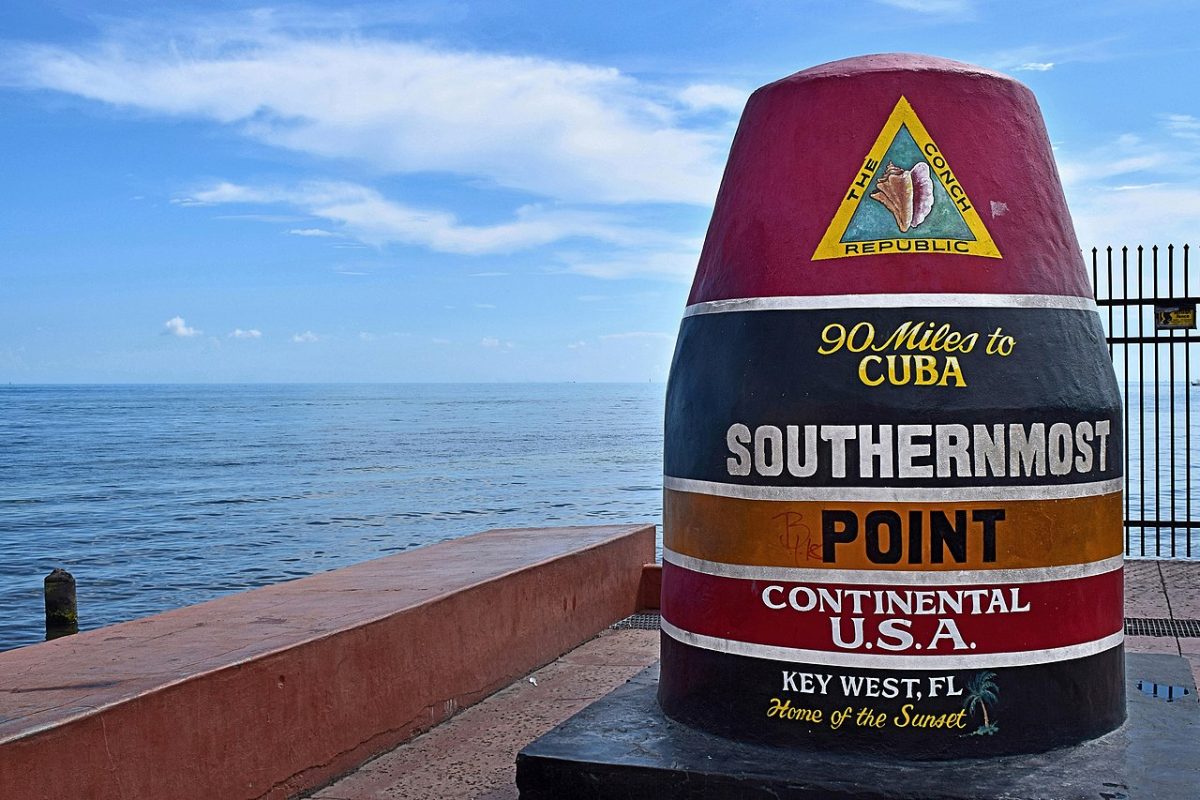 Photo by Radomianin on Wikimedia Commons

Southernmost Point is one of the most photographed places in Key West, Florida. It is situated in an old Key West neighborhood, at the corner of Whitehead and South streets. From a distance, it’s likely that you’ll see a long queue as people wait patiently to take a selfie with Southernmost Point’s iconic buoy. The oversized concrete buoy was constructed in 1983.

Most noteworthy is also the fact that Southernmost Point marks the spot where the USA is a mere 90 miles away from Cuba. If you’re considering dropping by this landmark, try to go early in the morning so as to avoid the cruise ship crowds. 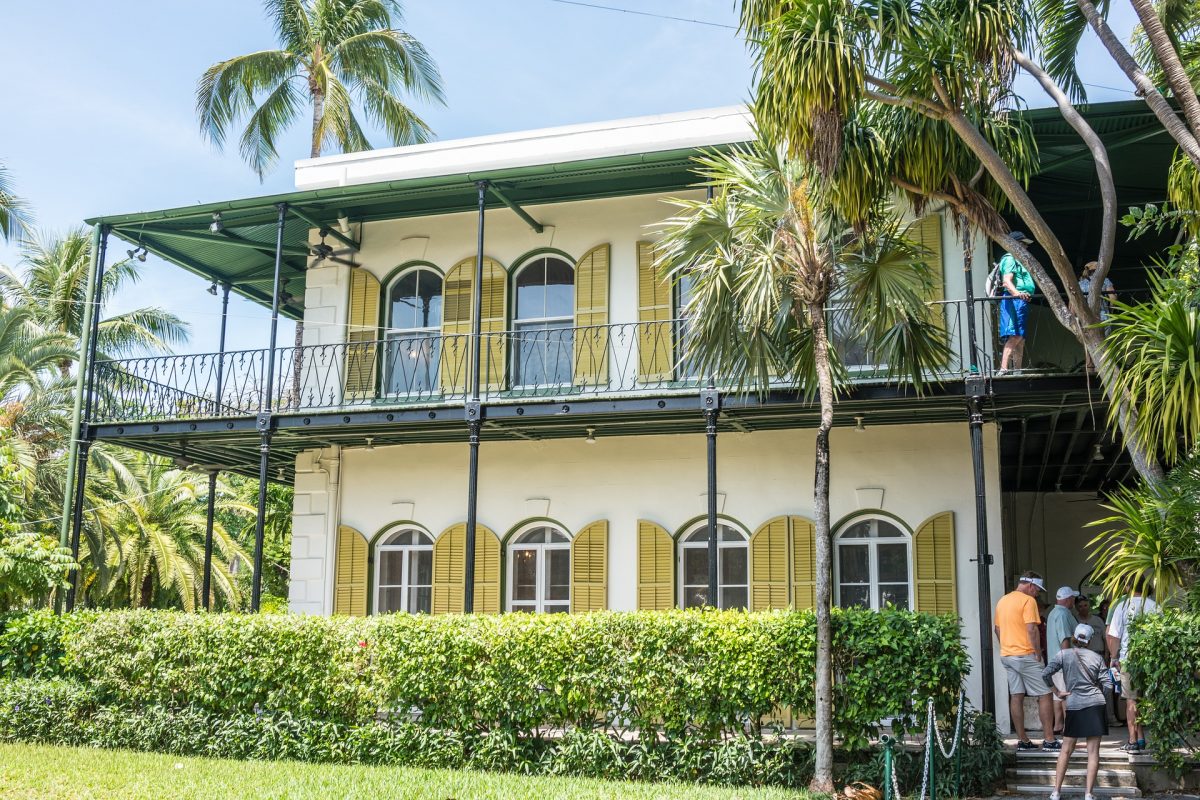 Next on our list is something all the literary buffs out there wouldn’t want to miss out on — the Ernest Hemingway Home and Museum. In the mid-1920s, Hemingway moved from Paris to Key West. There, he lived in a Spanish-style house that was given to him by an uncle of his second wife. It was in this house that he penned his popular books such as “A Farewell to Arms” and “Green Hills of Africa”.

Today, his former residence doubles as a museum as well. Explore the Ernest Hemingway Home and Museum and get a deeper look into Hemingway’s life through his memorabilia. You’ll also come across six-toed cats at his house as these creatures are descendents of a cat he once owned that was also six-toed. Spend some time at this literary landmark in Key West, Florida today!

Have a drink at Ernest Hemingway’s favorite bar 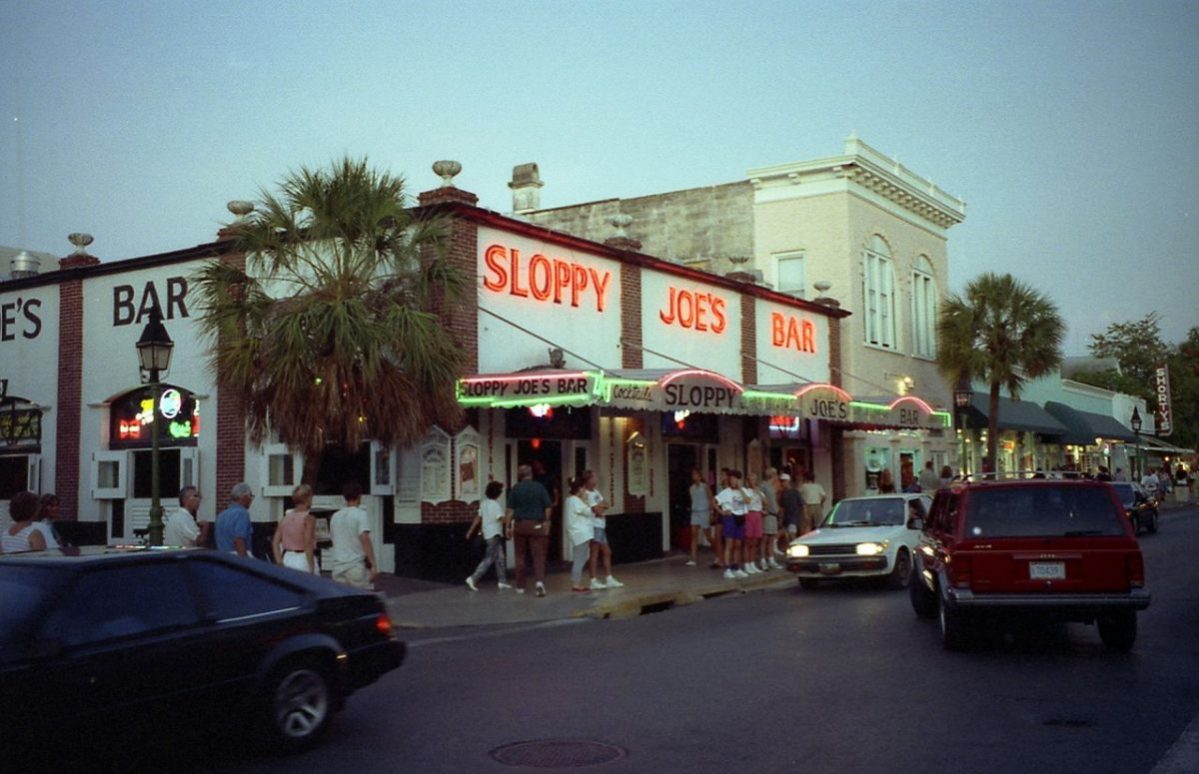 Photo by Priwo on Wikimedia Commons

It’s no secret that Ernest Hemingway enjoys a good drink or two. During his time in Key West, he frequented multiple bars and restaurants and one of his favorites was Sloppy Joe’s. He used to spend his evenings at this bar. Sloppy Joe’s prides on its connection with the renowned author and it shows through the events the bar holds.

They hold an annual Hemingway look-alike contest and even sell t-shirts with Hemingway’s face plastered on them. Try out one of their draft beers, the Sloppy Joe’s island ale, which costs USD 6.25. Their food options, such as their shrimp and chips, are just as good as their beers as well. 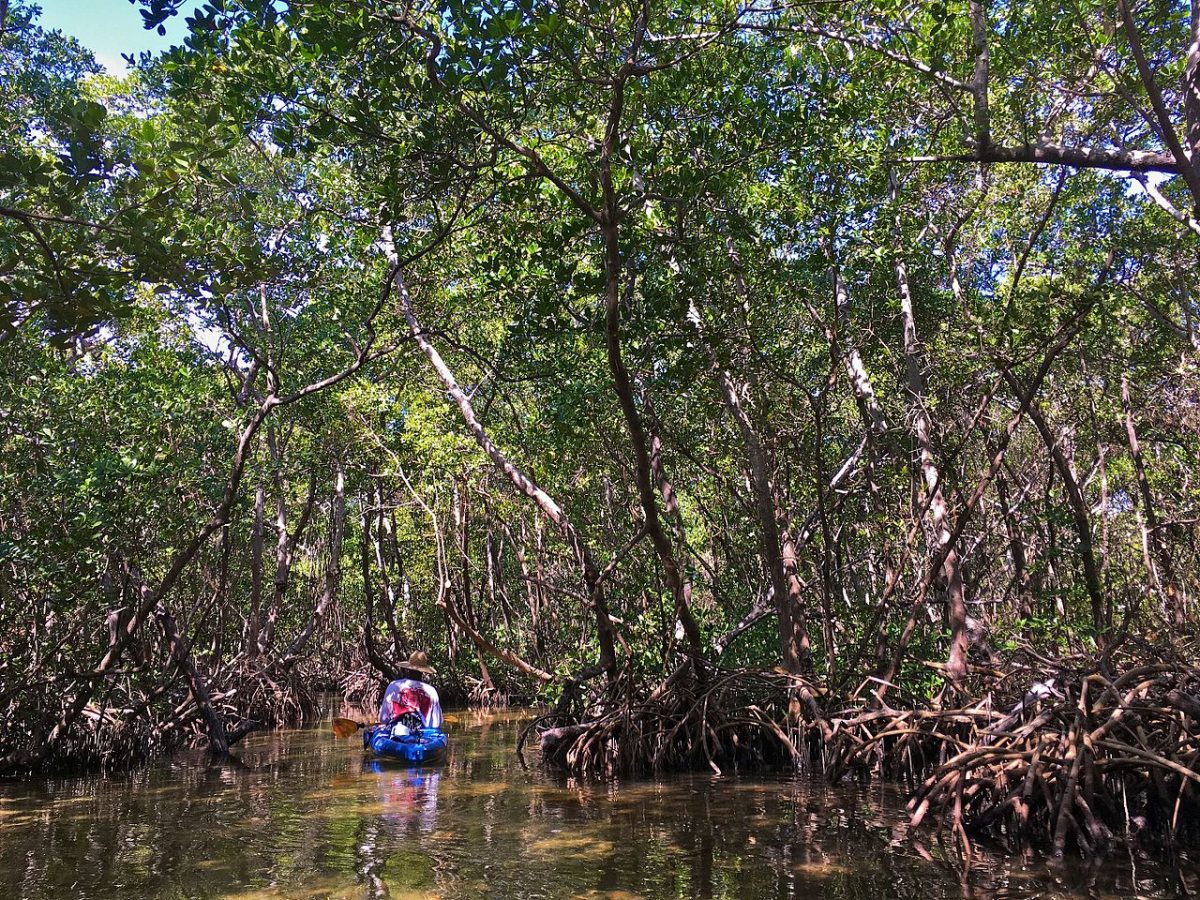 Florida may be known for its beaches but the mangroves in Key West is a hidden gem that you should definitely explore as well! Kayak through the mangrove canopy with Lazy Dog Adventures. Lazy Dog is a popular kayak and canoe rental service. Its five-star reviews online are a testament to the fantastic service it provides its customers.

Take a ride through the mangroves and enjoy a unique view of Key West. Since it’s a well-known rental service, be sure to book a tour as early as possible as the tours tend to sell out quickly. 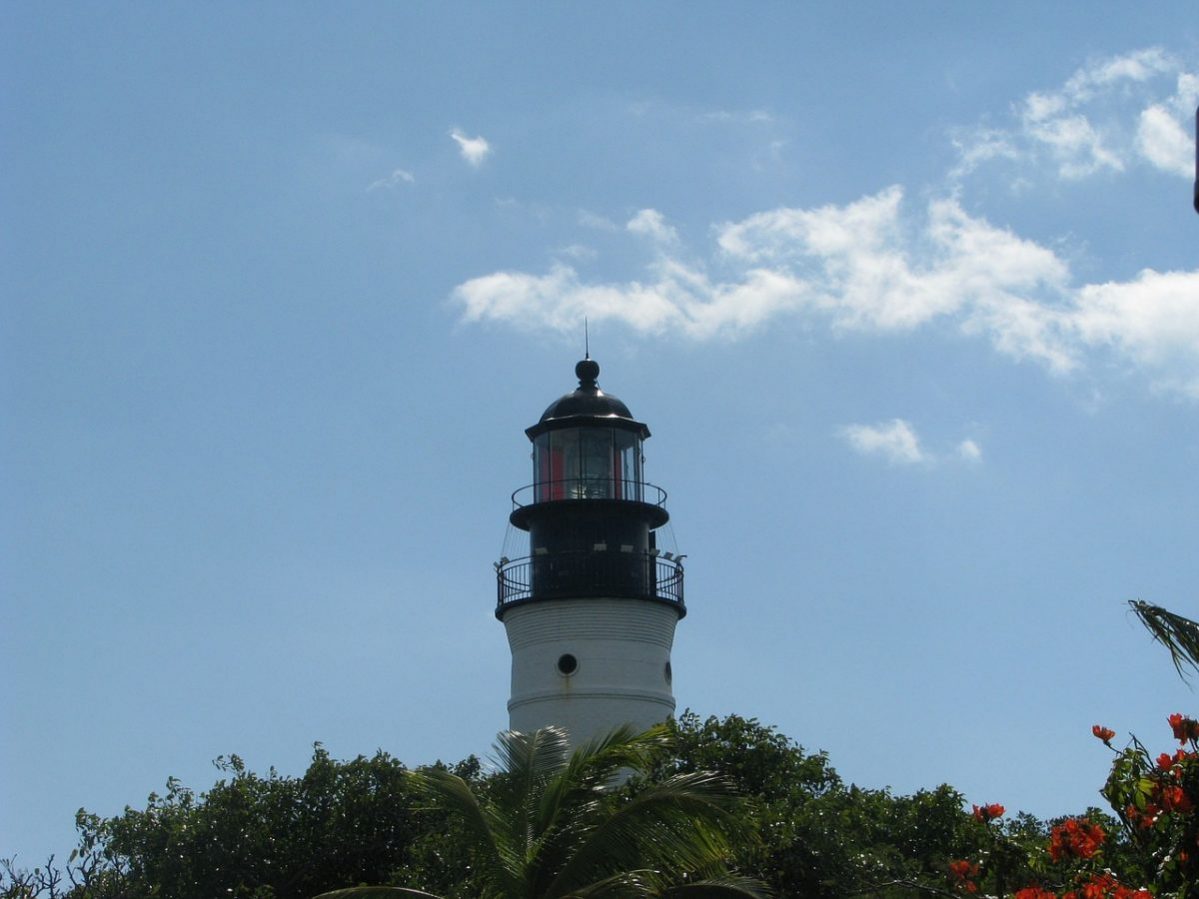 Photo by rustyc on Pixabay

On the ground level of the lighthouse is the Keeper’s Quarters. There, you can go through the photographs and personal belongings of the lighthouse Keepers. The Key West Lighthouse is open to the public from 9.30 am to 4.30 pm. However, you do have to pay an admission fee of USD 12 for adults and USD 6 for children aged 6 and above.

Take a ride on the Conch Tour Train 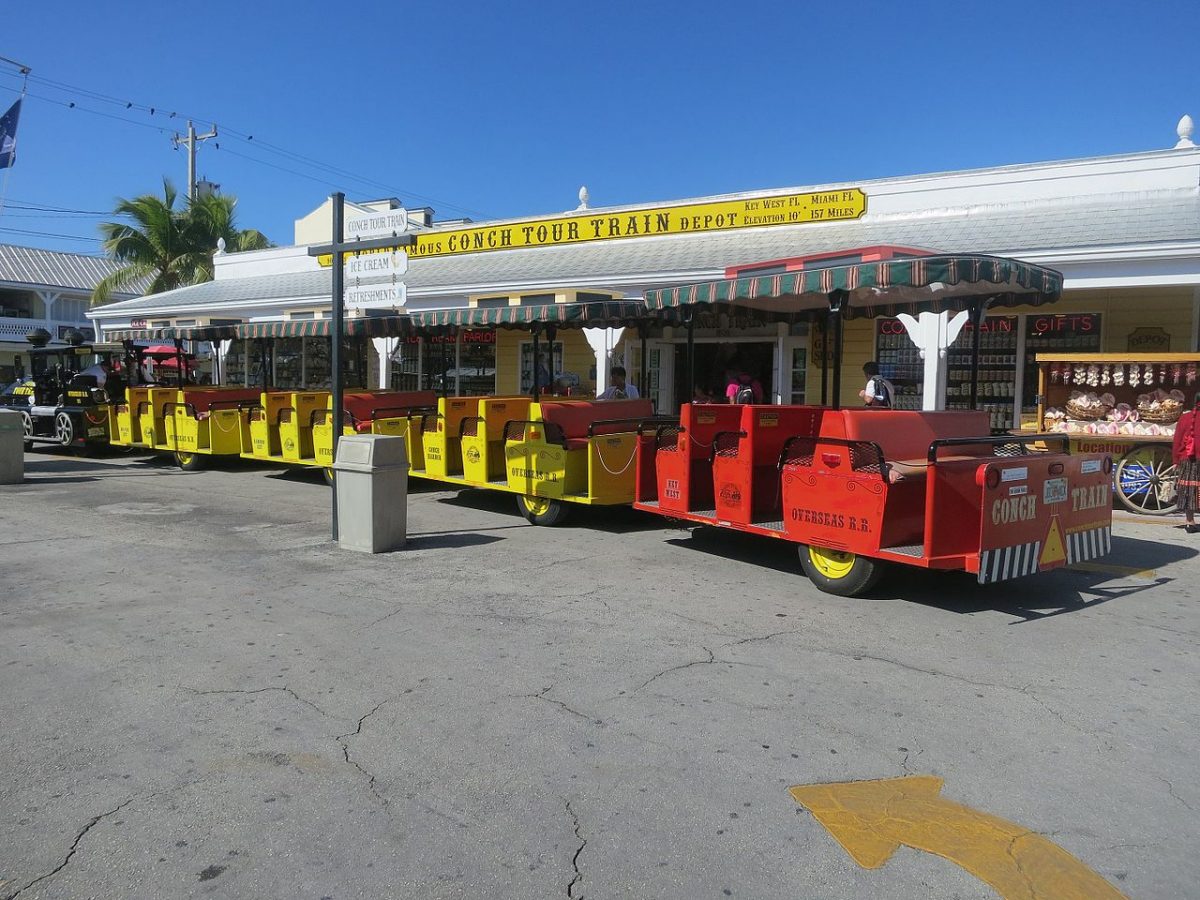 Sure, you can explore Key West in many different ways but hopping on the Conch Tour Train is one of the best ways to do so. The Conch Tour Train is a popular tourist attraction and has been running since 1958. It takes you around the city to witness all the amazing Key West attractions. This way, you can sit back, relax and enjoy the ride while you learn about the city’s history.

A ride on the Conch Tour Train lasts about an hour and a half. It begins and ends in the Key West downtown area, making it all the more convenient for you to explore other attractions on your own if you’d like. You can purchase tickets to board the Conch Tour Train online or at various locations which are also stated on the official company website.

Check out The Studios of Key West 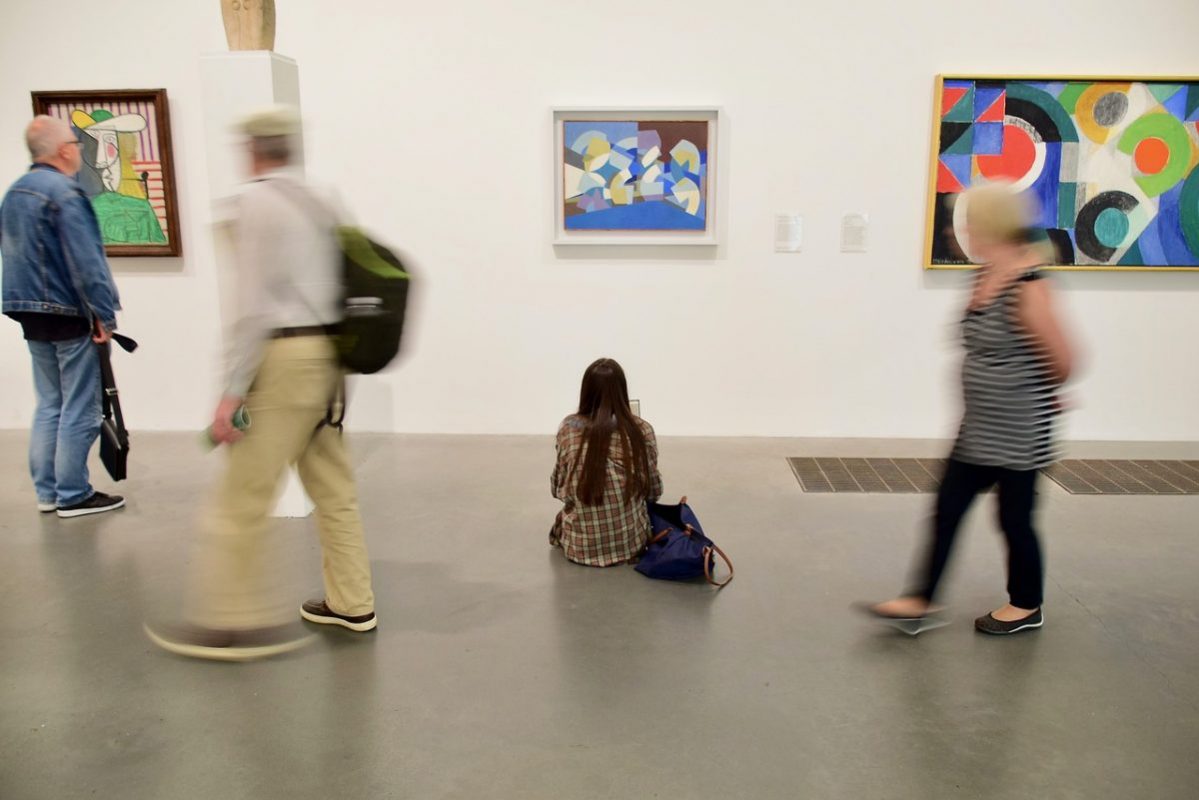 Photo by iSAWCompany on Pixabay

At The Studios of Key West, you can find a multitude of activities to take part in. They hold exhibitions, performances and various types of classes that you can sign up for. In particular, the galleries on the ground floor and third-floor showcase rotating exhibitions that highlight the community’s extensive creativity. The gallery is open from Tuesdays to Saturdays, from 10 am to 4 pm. Admission to the gallery is free as well!

There is also an independent, non-profit bookstore there called Books & Books. Since there are always classes and performances being held, be sure to check out The Studios’ event calendar online to see what events you can attend if you’re in town. Get cultured at The Studios of Key West today! 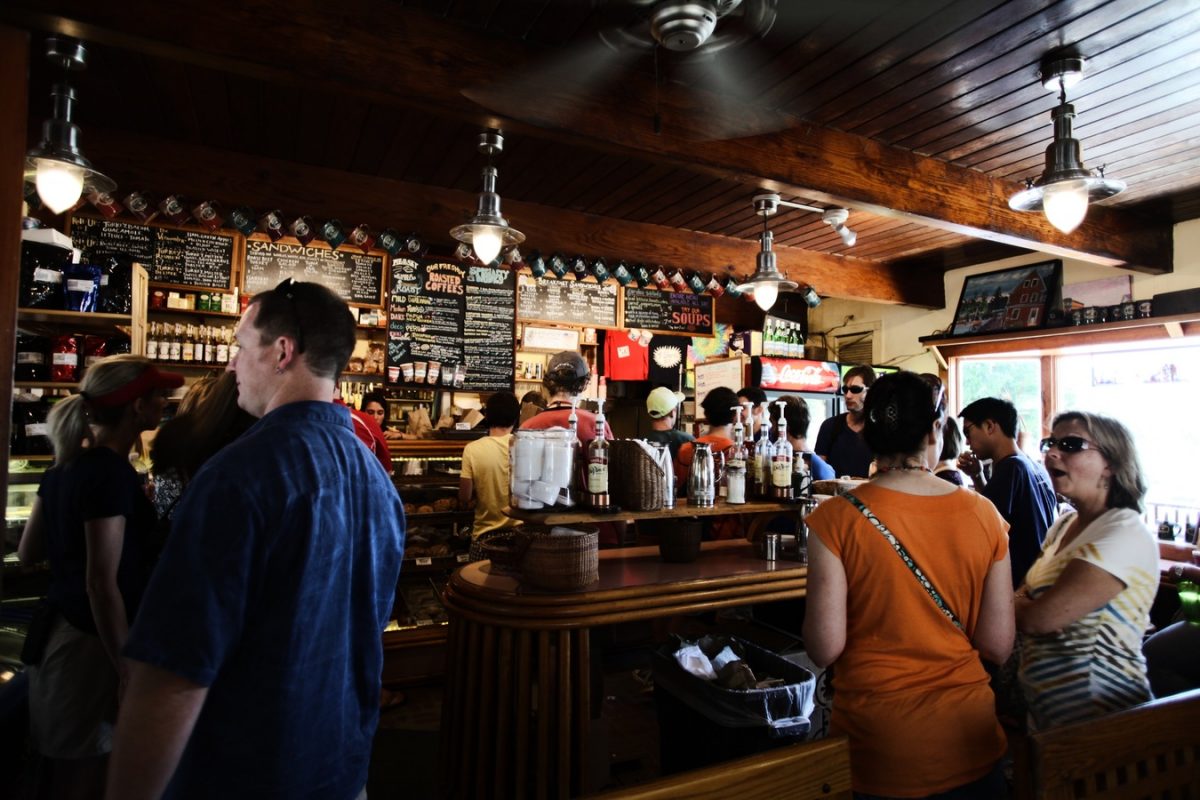 Garden of Eden is a bar in Key West, Florida with a rather interesting concept. It consists of two floors – the first floor is a typical bar whereas the second floor is a bar where clothing is optional. Yes, you read that right. You can also do some body painting while you’re there. There is even an in-house DJ playing live music to liven the atmosphere. The roof deck is definitely known for being a place of fun. However, if you’d prefer a more laid-back environment, you can just hang out on the ground floor of the Garden of Eden.

Enjoy a liberating experience at Key West’s Garden of Eden! It definitely makes for an interesting story to share with your friends. 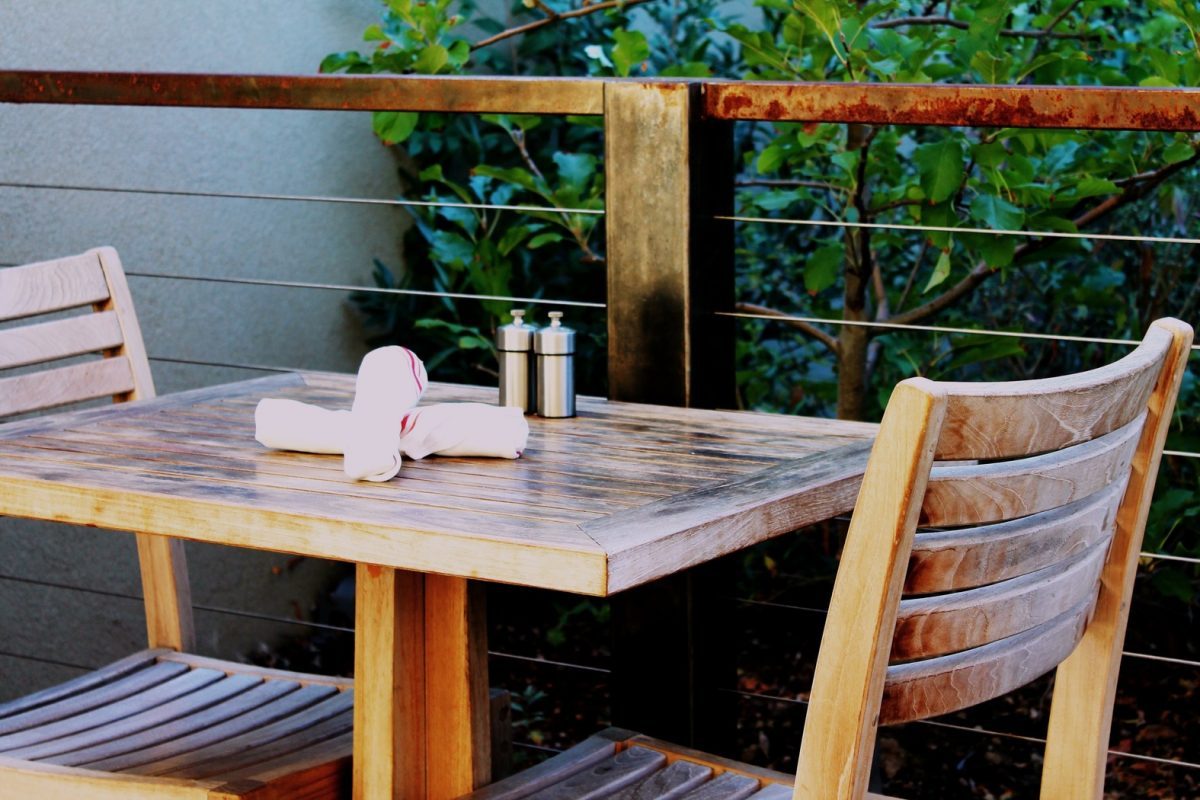 Established in 1805, Pepe’s Cafe is the oldest joint in Key West and prides itself on this rich history. This restaurant and bar serves up classic American dishes for breakfast, lunch and dinner but is better known for its breakfast spread. They have early-morning hours that start from 7.30 am. Pepe’s Cafe also offers a Build Your Own Breakfast option where you can customize your own omelet!

You can enjoy your food in the restaurant’s charming patio garden or dine in its air-conditioned space indoors. Pepe’s Cafe is a great local gem that is worth a stop during your time in Key West, Florida. The restaurant is open daily from 7.30 am to 10 pm.

Soak in the lively atmosphere of Mallory Square 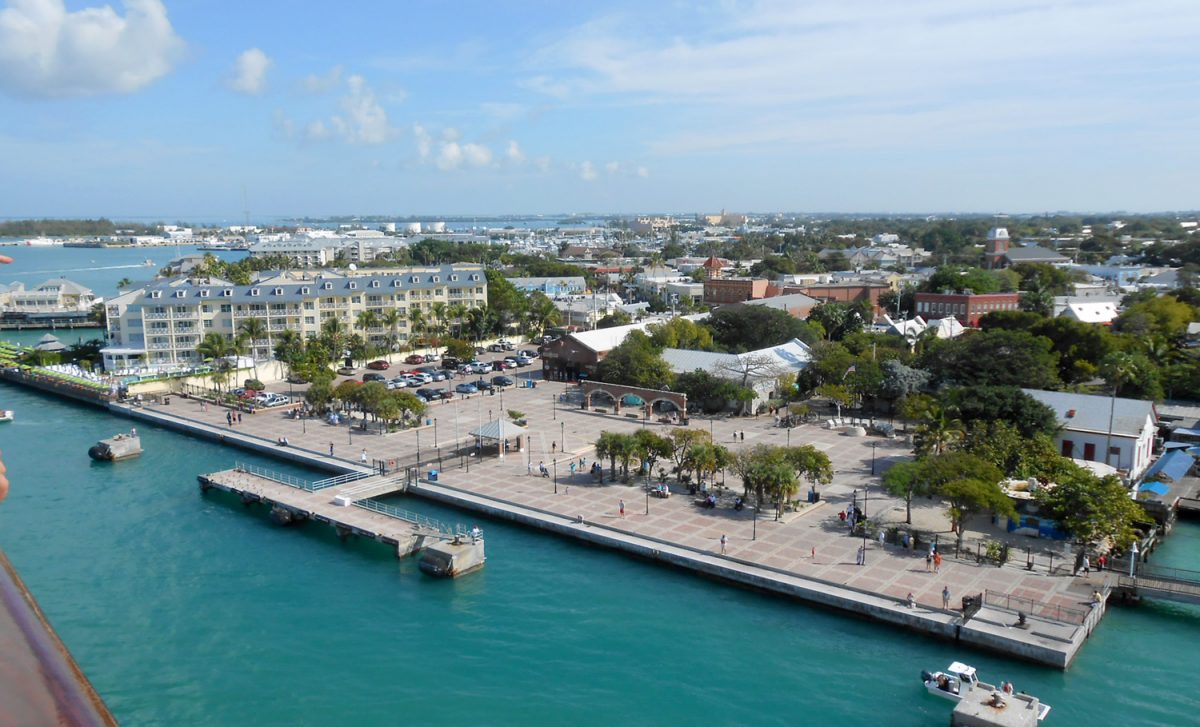 Mallory Square is a distinct Key West attraction filled with a diverse variety of dining and shopping options. It’s also near other attractions such as the Ernest Hemingway House and Museum. The shops at Mallory Square sell charming trinkets and local gems that are sure to win your hearts. One of these shops is the Shell Warehouse which has the largest selections of seashells in Key West. They make for perfect souvenirs!

Mallory Square is a must-visit attraction in Key West so be sure to explore this commercial hub. You can even witness beautiful sunsets in the area after a long day of shopping!

Spend the weekend by the waterfront at Pier House 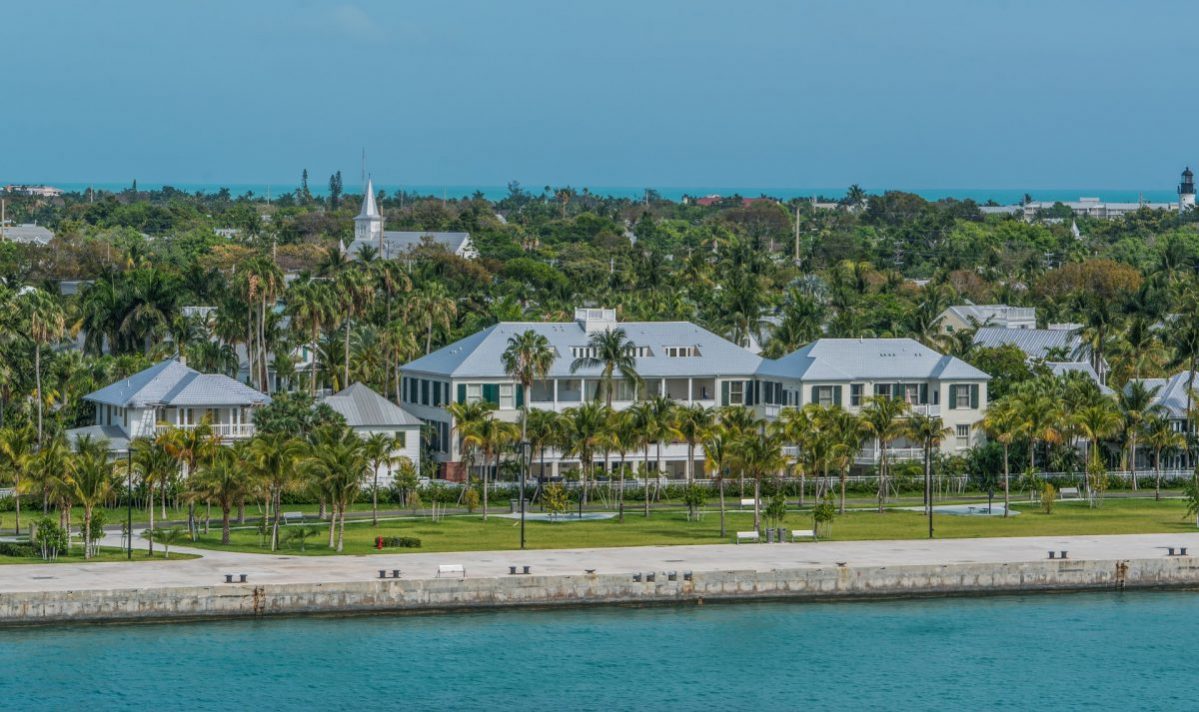 Not sure where to stay during your time in Key West, Florida? If you’d like somewhere with a view, the Pier House Resort and Spa is just the place for you! They offer a number of accommodation options that range from suites to townhouses that are located just by the beach. You’ll be greeted by stunning views of the Sunset Pier here! Pier House Resort is also the only resort in Key West with a full-service spa.

The resort is also situated near famous Key West attractions like Mallory Square. Book one of the new ocean suites at Pier House Resort and Spa today! With the resort’s luxurious amenities and nearby attractions that it has to offer, this is a great place to stay at during your time in Key West, Florida! 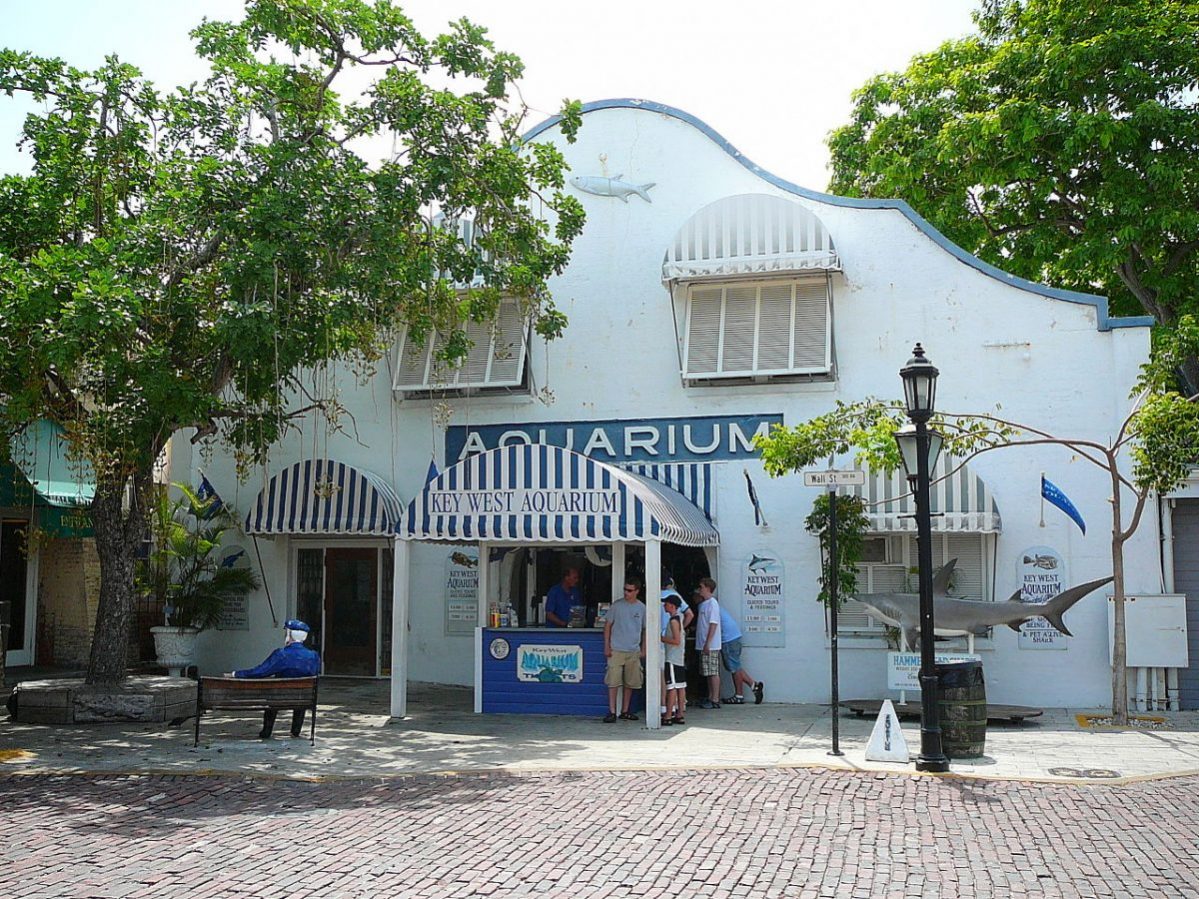 Key West Aquarium is the only aquarium in Key West, Florida and it’s located in the iconic landmark of Mallory Square. The aquarium is popular among people from all age groups. It has a vast range of marine creatures, some of which include jellyfish and alligators.

An interesting aspect of the Key West Aquarium is the Aquarium Touch Park. This tank in key West houses various marine creatures like conchs and sea stars. Parents and children can then get up close and personal with the animals themselves! You can also take a tour of the touch tank and the rest of the aquarium. This tour lasts around 20 minutes.

The prices of the tickets vary for adults and children. All prices are stated on the Key West Aquarium’s official website. In fact, you can enjoy greater savings when you purchase your tickets online as their online prices are cheaper than the usual tickets. 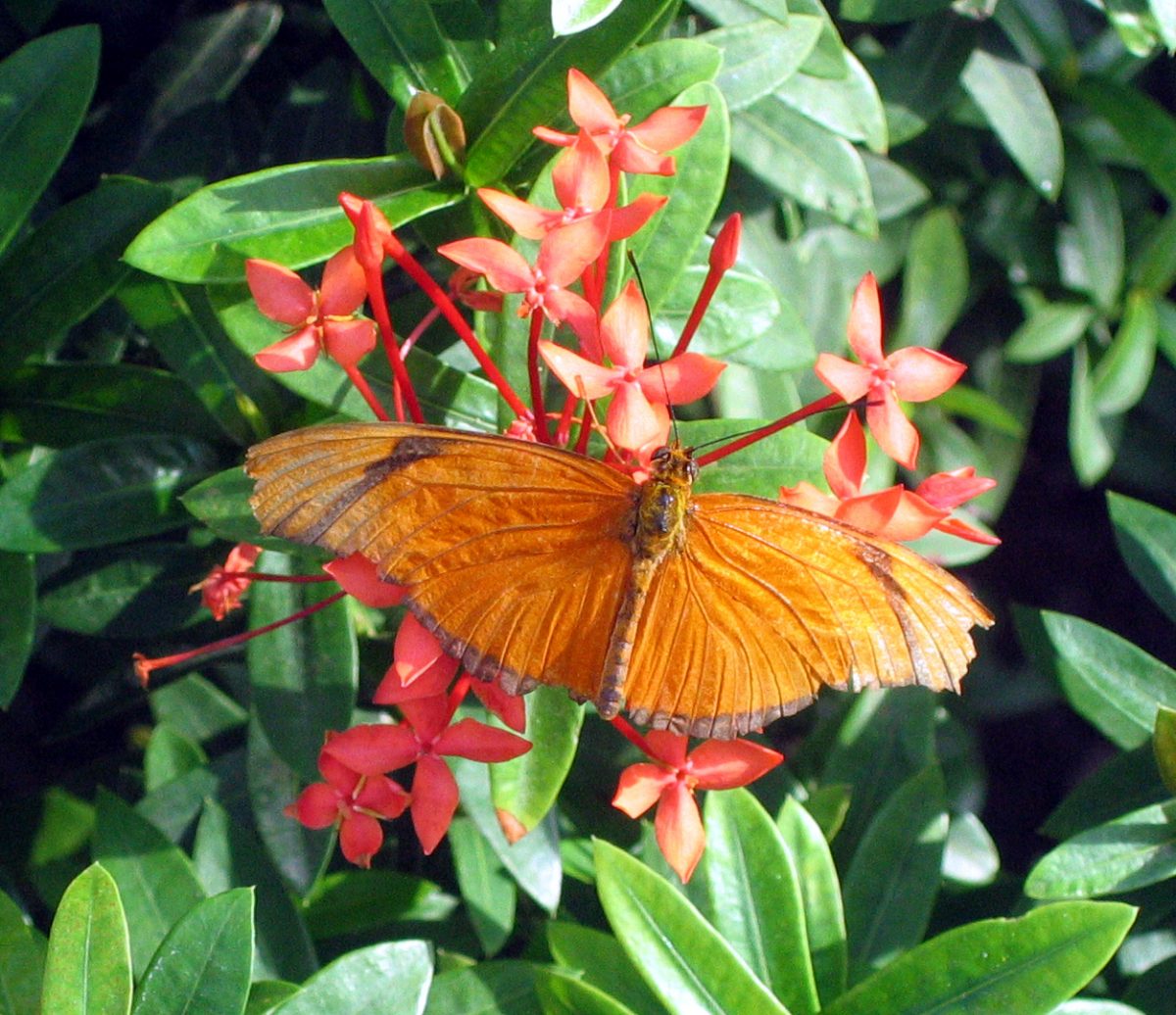 If you love butterflies, you need to visit the Key West Butterfly and Nature Conservatory. There are about 50 to 60 species of butterflies at this conservatory. At this glass-domed aviary, you’ll also be surrounded by 3500 plants and more than 20 species of exotic birds. If you’re lucky, you may even catch the flamingos doing their mating dance!

The atmosphere at the Key West Butterfly and Nature Conservatory is very serene and peaceful. So, this may be a good place to visit if you’d like a brief respite from the hustle and bustle of Key West city’s main attractions. There is also a separate learning center, an art gallery and a gift shop at the conservatory. Drop by the gift shop and grab a souvenir to remember your trip by!

Stroll down the vibrant Duval Street 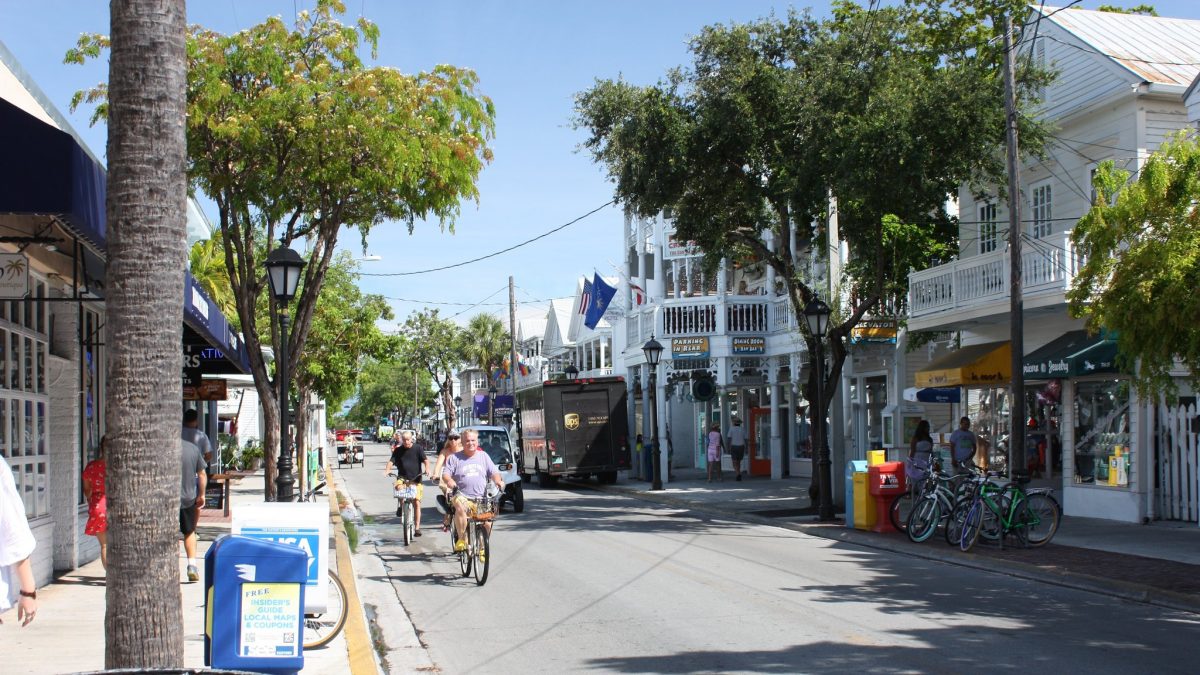 Filled with plenty of bars, restaurants and shops, Duval Street is one of Key West’s attractions that people flock to. Along this street, you can walk from the Atlantic Ocean to the Gulf of Mexico.

There are so many things to do here other than shopping at quirky stores and dining at charming cafes. For all the art enthusiasts out there, you can also find plenty of art galleries along Duval Street. There’s always something to do at this iconic Key West commercial hub!

Watch a movie at the Tropic Cinema 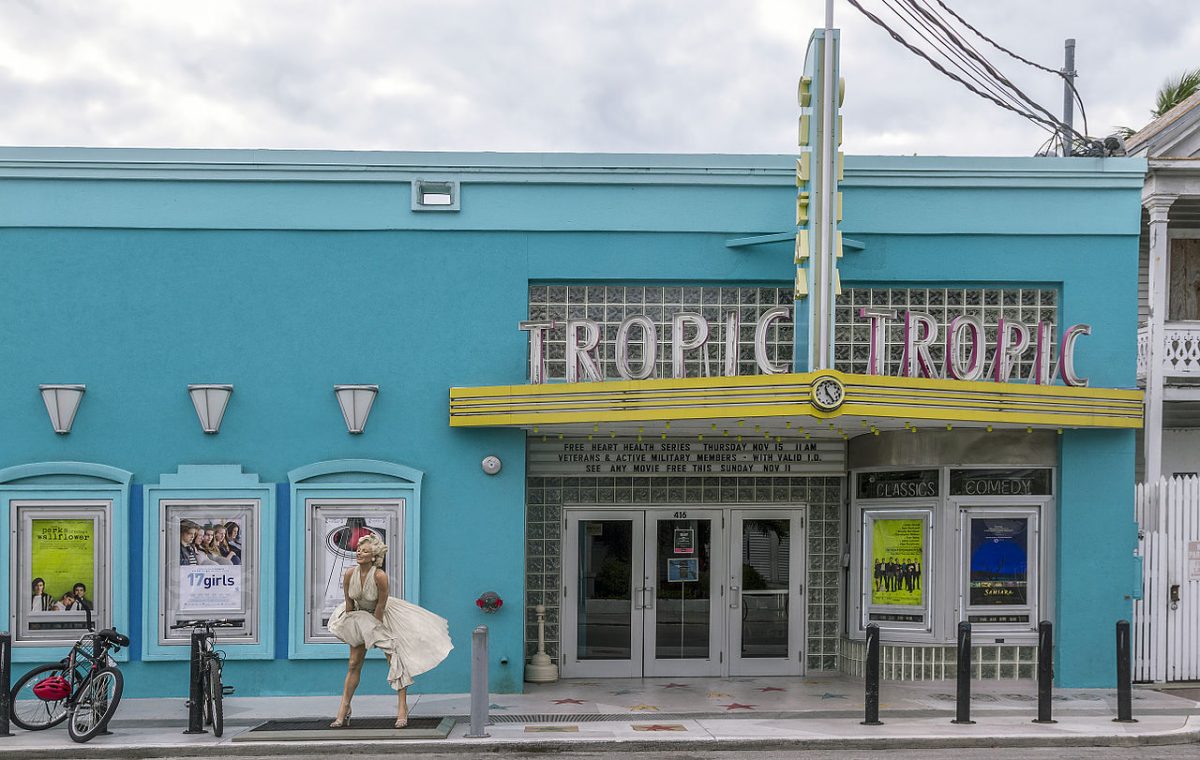 Photo by Acroterion on Wikimedia Commons

Catch a movie at the independent, retro-style Tropic Cinema for a unique cinema experience! The Tropic Cinema houses four theaters where they screen mainstream and indie films. Besides having movie screenings, there is also an art gallery housed within the cinema. The Tropic Art Gallery features Florida Keys artists. You can check out the movies that Tropic Cinema is showing on their official website!