Majestic palaces, vibrant culture, good food, and marvellous culture, that’s the fascinating royal city of Jaipur for you! It is, in fact, one of the few royal cities of India that still has its heritage and culture intact. Exploring these attractions can keep you hooked for days, with each having something unique under its cap.

Jaipur tourism entails historical palaces, gardens, bazaars (markets), and much more.  It is not only the capital of the Rajasthan state but also the largest city, therein. It is a gold mine of royal palaces, gardens and museums, but that’s not what it’s all about.

You will find a plethora of ways to quench the thirst of the explorer in you.

However long your trip is, there are so many fun things to do in Jaipur. Besides, many tourists stay here for months, thanks to the enthralling charm and tranquillity it holds.

Thus, there are plenty of reasons for Jaipur being an ideal tourist destination. From sightseeing to hot air ballooning, to endless shopping, there’s plenty of things to do in the Pink City. Are you ready?

Savour In The Beauty Of The Hawa Mahal, Jaipur 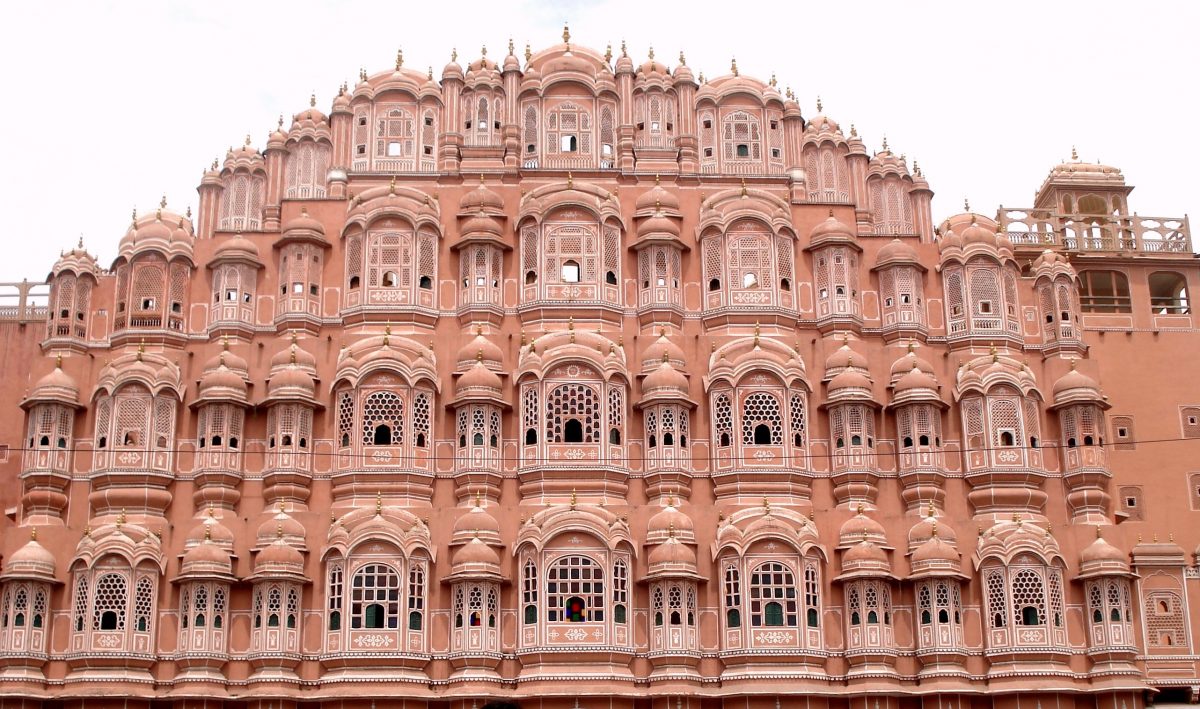 Visiting the Hawa Mahal or the Palace of the winds must be on top of your places to visit in Jaipur list. It has a unique honeycomb structure that stands five-storey tall. The intricate work on its windows, called ‘jharokhas’ was for the privacy of women from royal families.

Also, the queens and princesses could peep at the processions going on the through the passage below. The design of the Hawa Mahal is also inspired by the crown of Lord Krishna, a Hindu deity. One of the best places to visit in Jaipur, you must not miss this one.

Book Your Stay At The Opulent City Palace, Jaipur 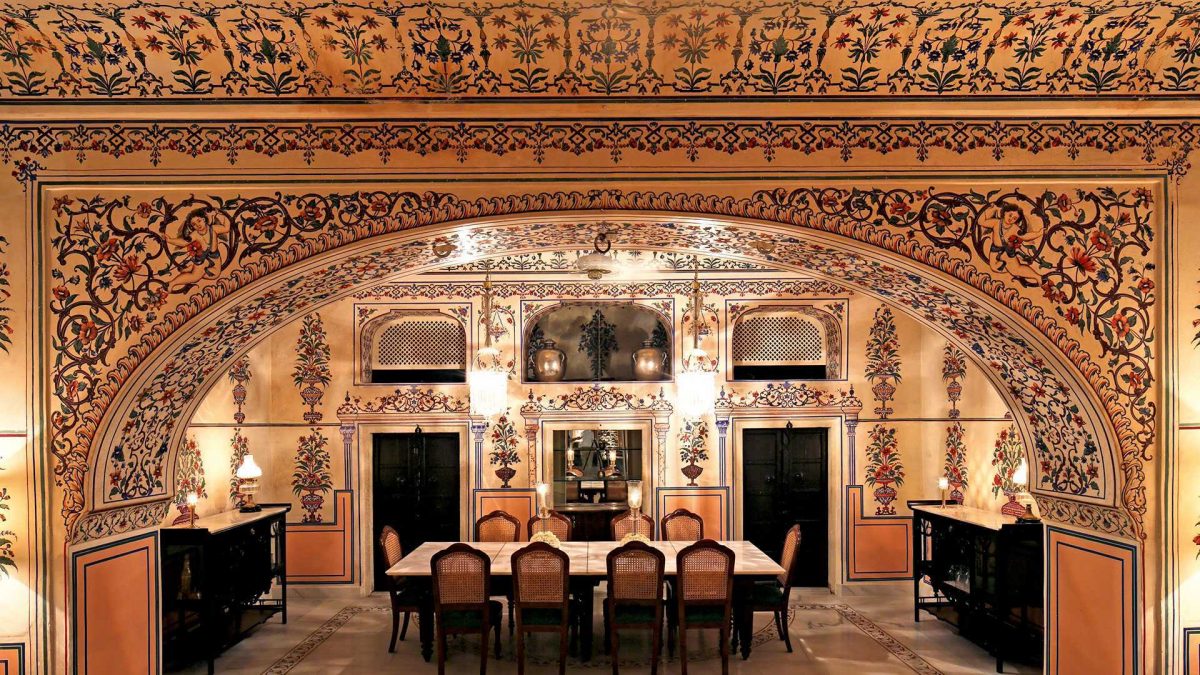 Located in the heart of the city, the City Palace has been the abode of the royal family for centuries. This remarkable palace has a striking architecture that’s an amalgamation of Rajput and Mughal styles. The City Palace in the pink city is simply enormous, and you’ll love exploring its courtyards, halls balconies, etc.

The exteriors boast of elegant engravings, while the interiors feature lavish crystal chandeliers. Besides, the wall decor is exquisitely splendid. You’ll also find a display of the royal artillery, carriages, and many other striking properties of the Jaipur royals.

Take The Royal Elephant Ride To The Amber Palace 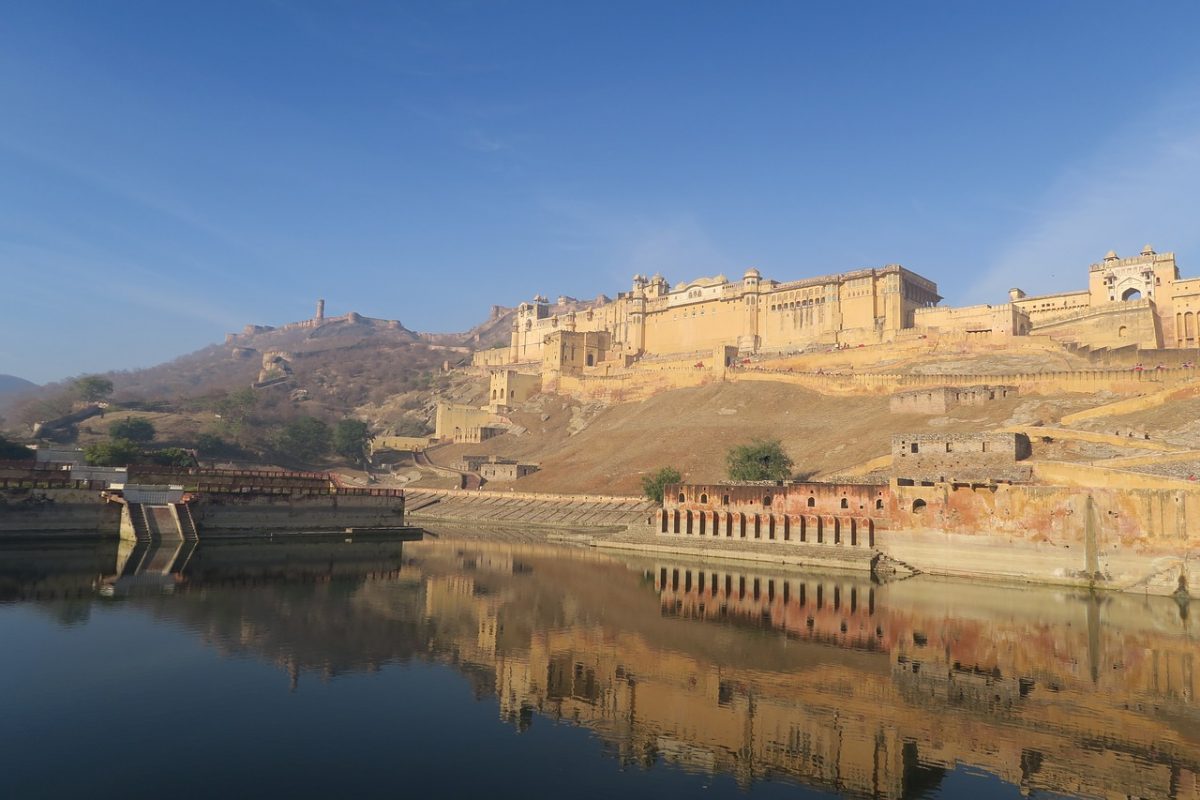 Photo By Adam Hill From Pixabay

An iconic palace in Jaipur, the Amber Fort is a must-visit place on your Jaipur trip. Its a perfect fusion of Indian and Mughal architecture, covering a 4 square kilometre area. It once stood tall in the face of invasions, and now for its picturesque beauty.

Pamper yourself with some royal treatment in the Pink City, by hiring an elephant ride to the fort. Also, make sure that you attend the Light and Sound Show when you are here. The entry fee is merely rupee 25. 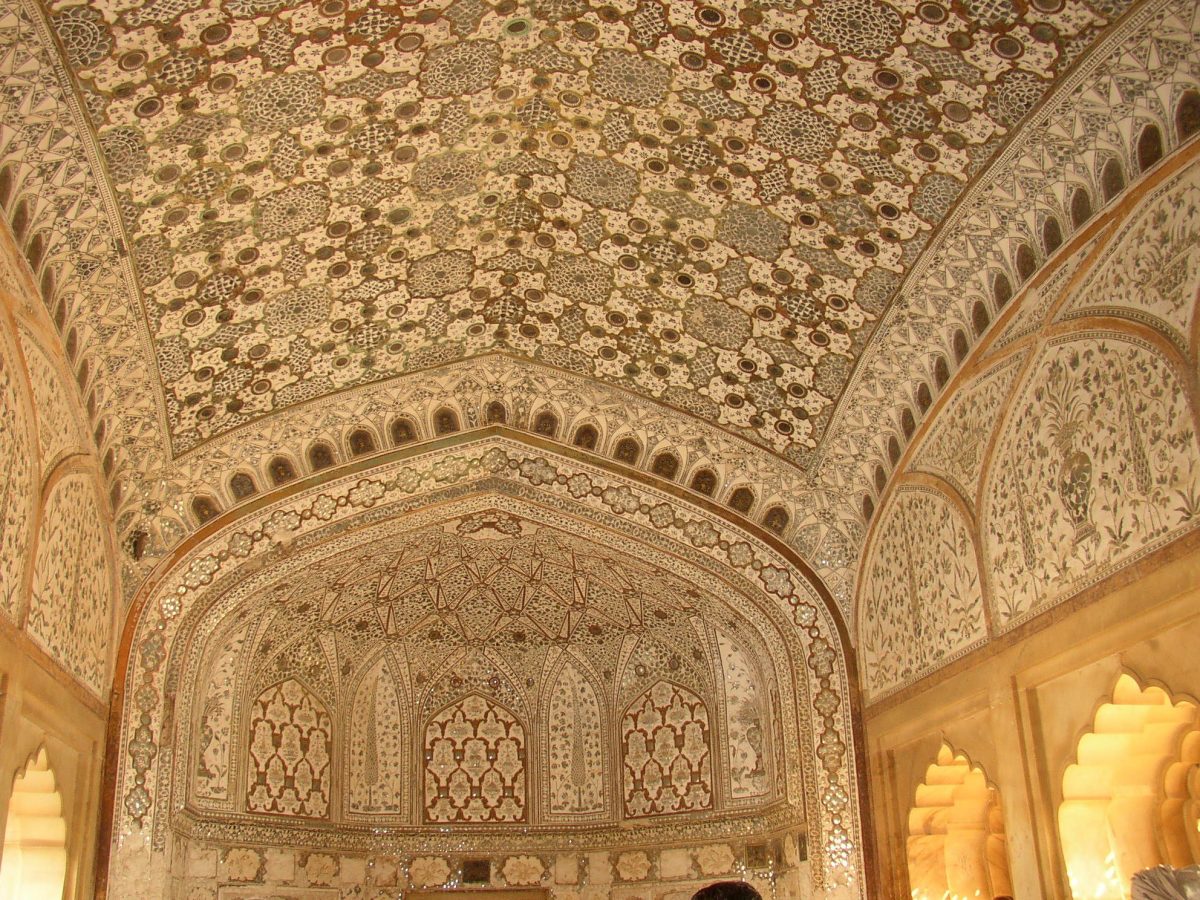 Another gem hidden inside the Amber Fort is the Sheesh Mahal, and visiting it is a must. Sheesh Mahal directly translates into the Palace of Mirrors. And just as the name suggests, it is adorned with several mirrors. It’s created in such a way that even a single ray of light is sufficient to illuminate the entire space — all due to the property of reflection.

Explore Some Science At The Jantar Mantar, Jaipur 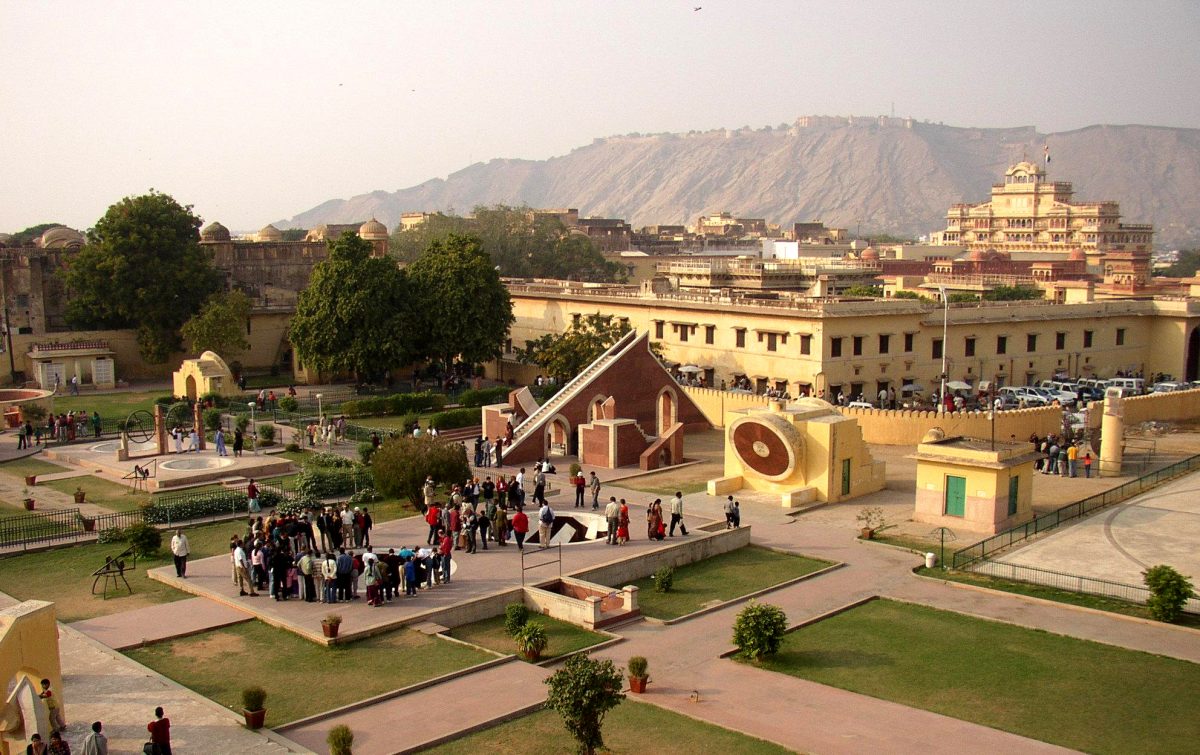 Jantar Mantar is an observatory built by the Jaipur Maharaja, Maharaja Sawai Jai Singh. He’s credited for building many architectural and scientific epitomes in his kingdom, apart from the planned city of Jaipur. Jantar Mantar is one such example.

It is also a UNESCO World Heritage Site, that consists of a dozen geometric instruments. These are used to carry out astronomical calculations, like calculating time, eclipses, track stars, etc. It’s, of course, one of the star tourist attraction of the Pink City. No pun intended!

Go On Cycling Expedition To The Nahargarh Fort 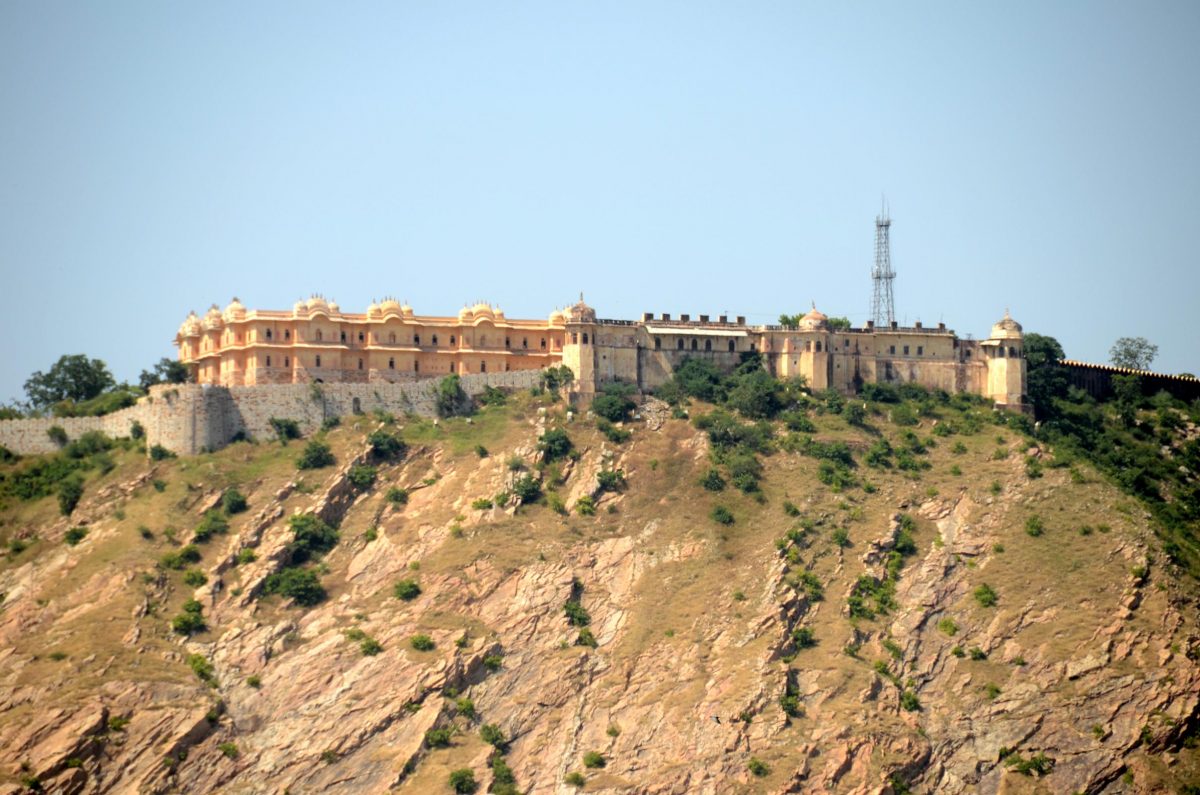 As per a legend, the fort was named after Maharaja Nahar Singh, to soothe his angry spirit. Besides, another states that the rooms were laid in such a way that the Maharaja could visit one of his ‘queens’, without the others knowing.

The magnificent Nahargarh Fort sits on the edge of the Aravalli Hills. While the view of the city from the top is a sight worth remembering. You can also have some snacks from the bar that’s associated atop this fort. It is also one of the best things to do in Jaipur due to its fascinating history.

Photo By Richard Mcall From Pixabay

Another rich icon of Jaipur tourism, visiting the picturesque Jal Mahal is a crucial thing to do in Jaipur. Besides, this grand palace is nestled in the arms of the Nahargarh hills and within the waters of Mansagar Lake. In fact, its four out of five floors remain submerged when the lake is full.

It exudes the brilliance of the Rajput style of architecture, though you can’t go inside, as it’s currently under maintenance. You may still enjoy a boat ride around the palace and see its beauty up close. The sight looks exceptional, especially at sunset, and that’s the best time to capture a fantastic shot.

Relish The Lavishness Of The Rambagh Palace 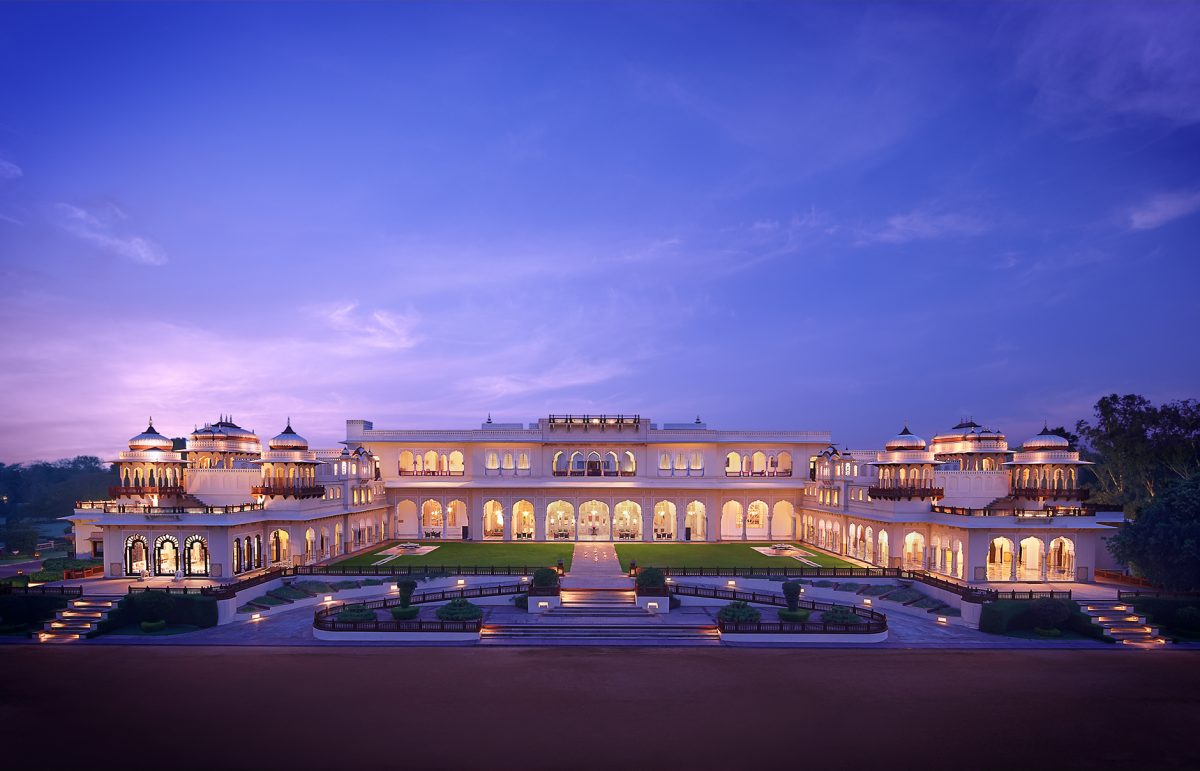 The Rambagh Palace is an outstanding beauty in the Pink City. This former residence of the Jaipur royal family is now a hotel, run by the Taj chain of hotels. Located just about 4 miles from Jaipur, you’ll take quite some time to explore the whole place.

Luxury spills out from every nook and corner of the Rambagh Palace. Plus, you can treat yourself to the same abundance as the royals. So indulging in the excellence of about two hundred years of luxury is one marvellous thing to do in Jaipur. 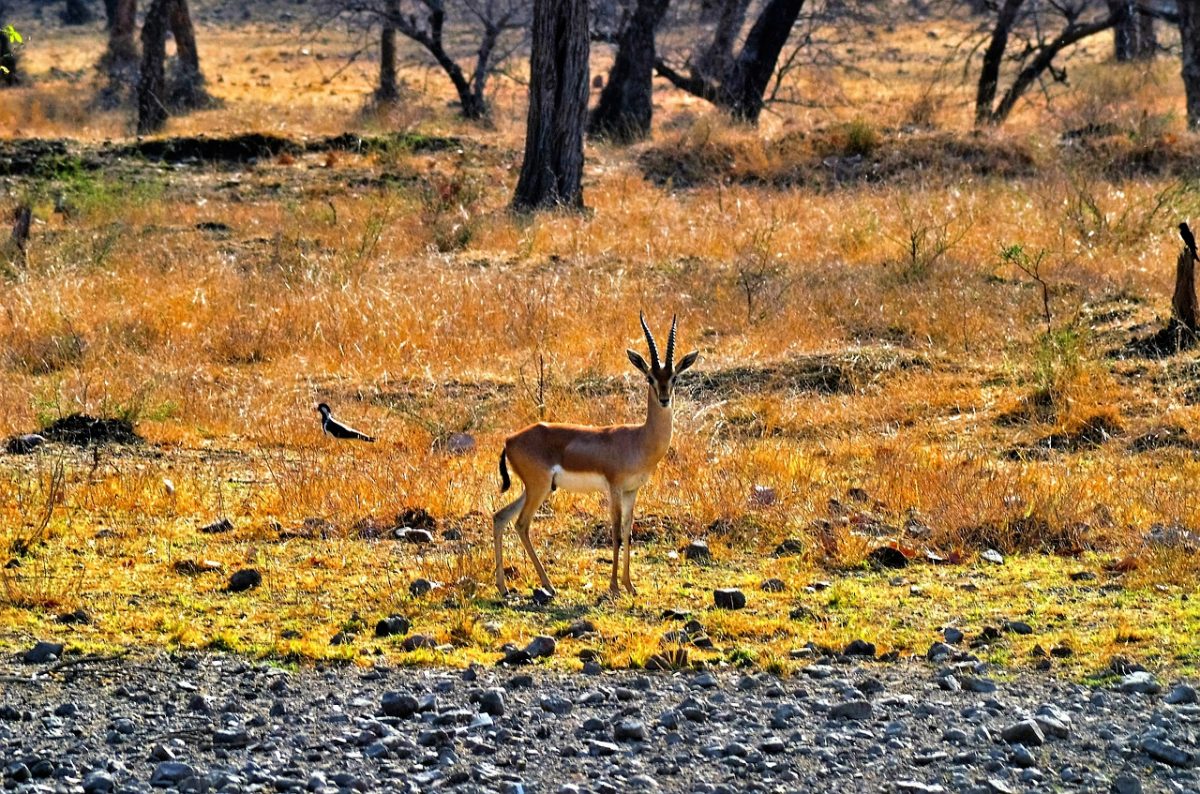 Photo By Manoharan Rathinam From Pixabay

One of the largest tiger reserves in India, Ranthambhore National Park is the spot for the adventure and wildlife lovers. Its former royal hunting grounds have now been turned into safe grounds for wildlife, and also a tourist place.

Plus this park is home to many species, like Leopards, Tigers, Hyenas, and even Pelicans, Parakeets and Flamingos. Another noteworthy thing to do here is hot-air ballooning, which will give you breathtaking views of the Park.

Be Awed By The Grandeur Of Birla Mandir 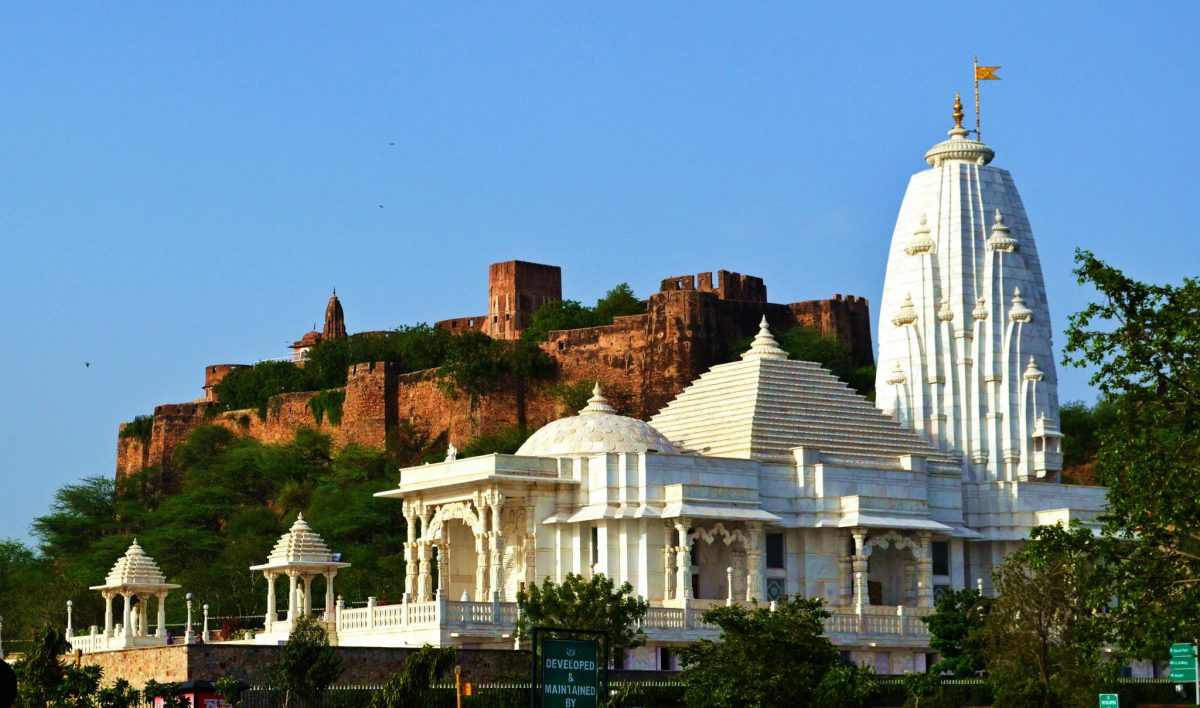 The Birla Mandir is pure white marvel standing tall in Tilak Nagar in Jaipur, the Pink City. In fact, there are many more Birla Mandirs in India, which trace their root the famous Birla family. This temple stands at the foothills of the Moti Dungari.

The temple also features three different domes that look marvellous. Expect to be in awe of its full glory, especially at night when it fully bathes in light. The idols of the gods and goddesses inside the temple are another eye candy. 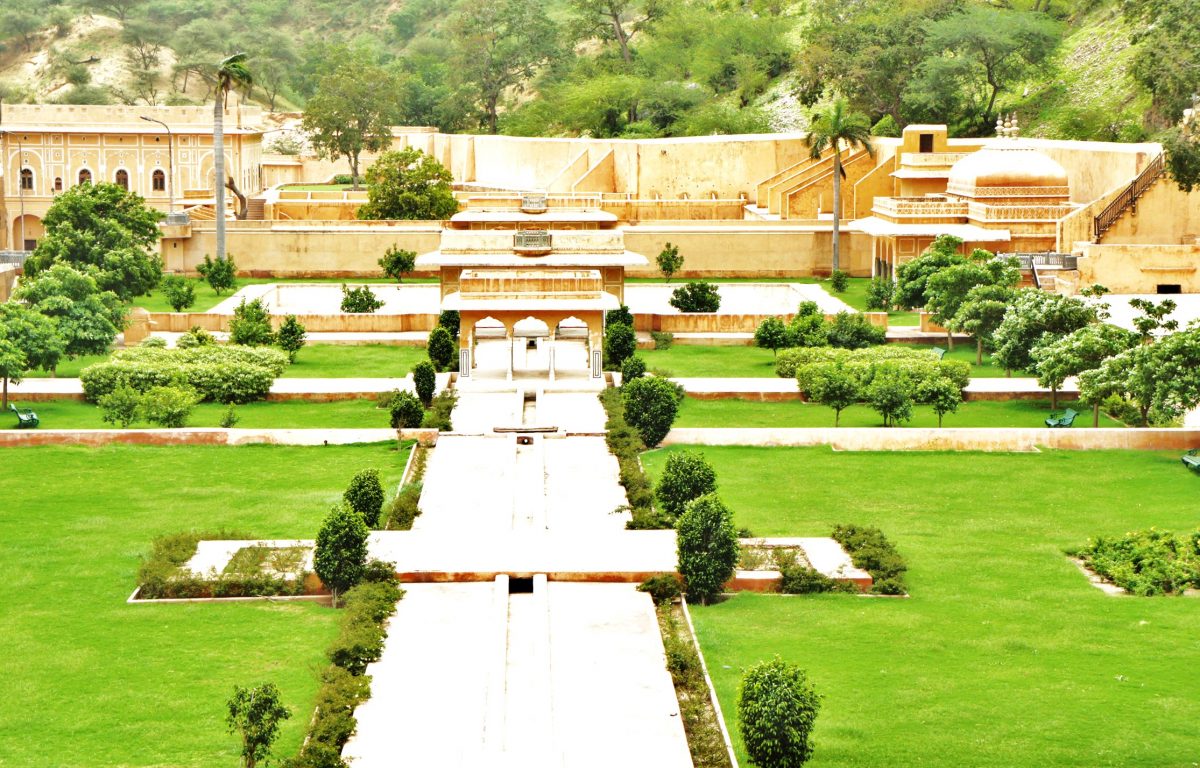 Also known as the garden of Queen Sisodiya, the Sisodiya Rani Bagh is just a while away from Jaipur. Sisodiya was actually the princess of Udaipur, and later the queen of Jaipur. The garden is renowned for its wealth of flora and other natural attractions.

From flowerbeds, galleries, pavilions, and many other attractions bring together tourists from all walks of life to its precincts. The pavillions present in this garden are decked with elegance.

Devour The Rajasthani Cuisines And Culture At Chokhi Dhani 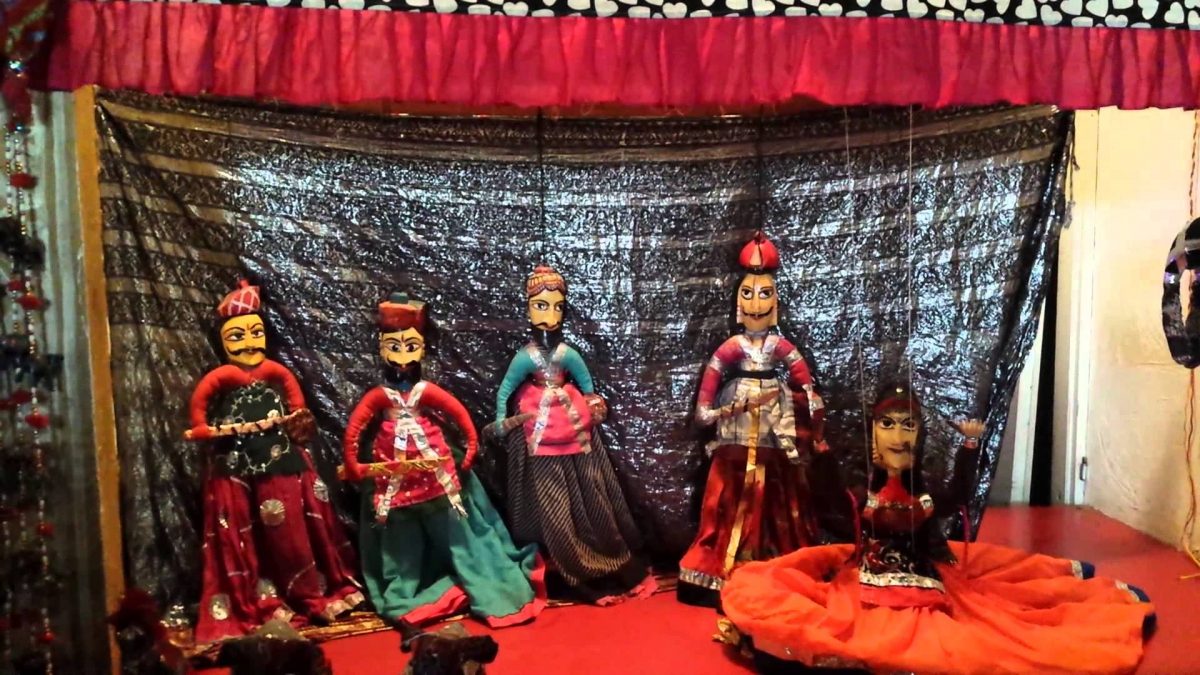 The Chokhi Dhani is one such place where you can taste the entire Rajasthani culture under one roof. Set up like a village, replete with all the traditional aspects, which might be difficult to find nowadays. You can also treat yourself to the puppet show, acrobatic and dance performances, camel and elephant rides, boating and much more.

The best part? You’ll be savouring mouth-watering Rajasthani cuisines, that will make you lick your fingers at this place in Jaipur.

Thrift Shop At The Jaipur Bazaars 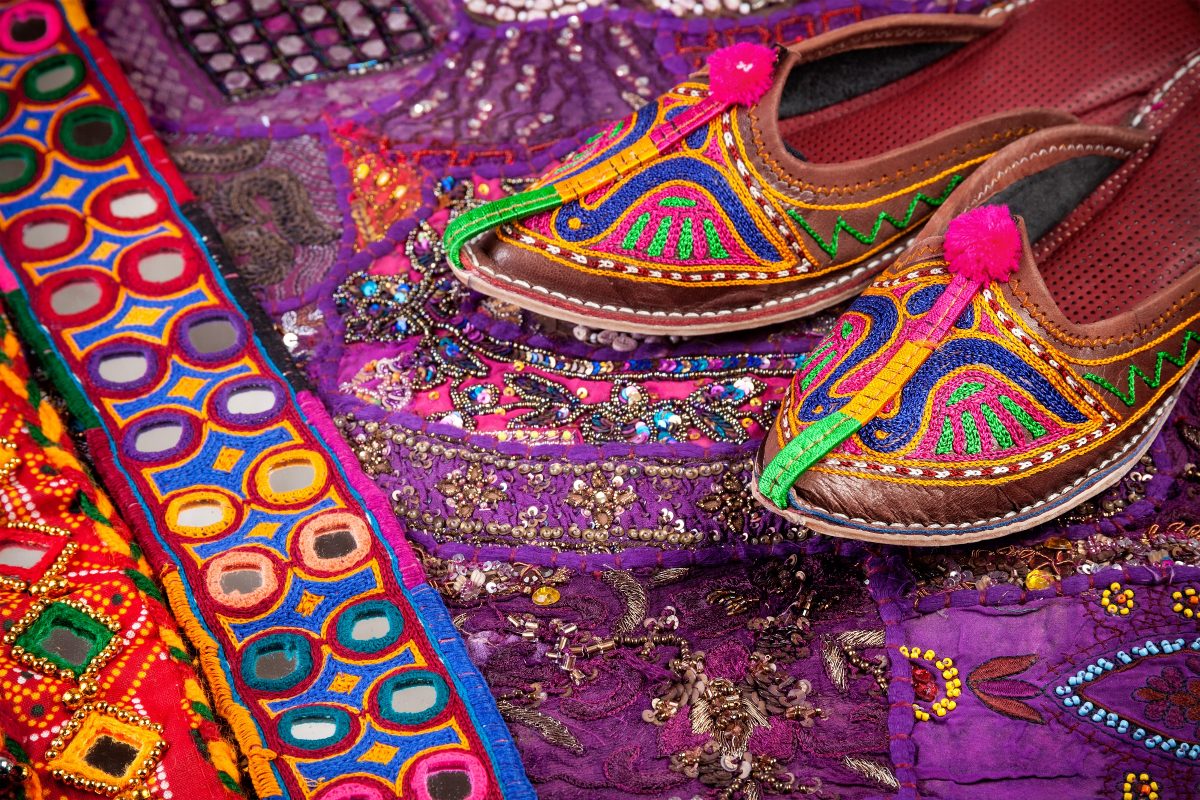 Find the most vibrant of Rajasthani attires and jewellery at the Jaipur Bazaars. For instance, you can pick some precious gemstones at the Johari Bazaar and Tripolia Bazaar. Besides, the Chandpol Bazaar is famous for its marble sculptures of all shapes and sizes.

Also, on the Mirza Ismail Road, you can catch some astonishing wooden artefacts. You may also buy some Mojari footwear, blue pottery, and Rajasthani print clothes, while you are here. So, one of the best things to do in Jaipur, you’ll love splurging on these beautiful souvenirs.

Indulge In Some Local Fests 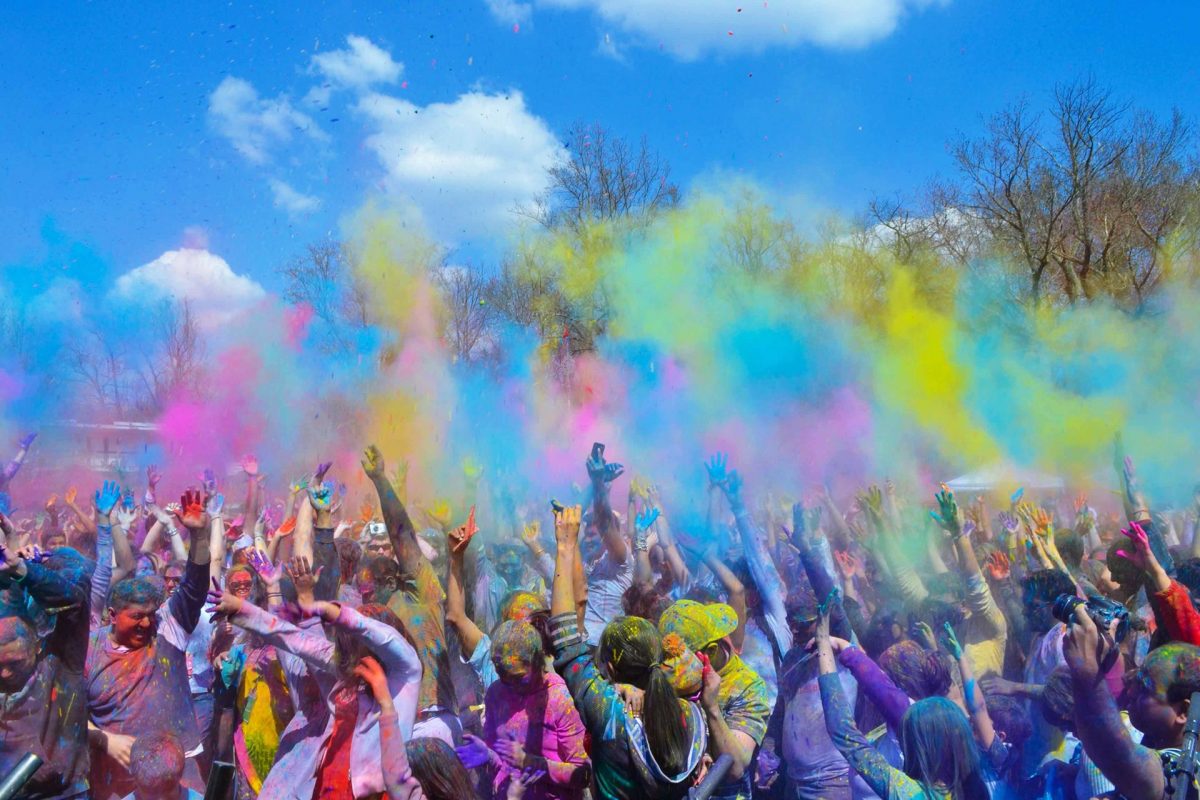 Throw some coloured powders (Gulal) in the sky and dance to the tunes of Bollywood songs. Yes, you might have guessed it right, I am talking about the famous Indian festival of Holi. Locally it is known as Dhulandi Festival. Dhulandi comes in the month of March.

Kites of varying shapes and sizes are another staple sport of the city. Especially if you visit the town around Gangaur or Teej, you’ll notice the skies full of these tiny dots. While there’s also a Kite Festival for you be a part of this mesmerising game. 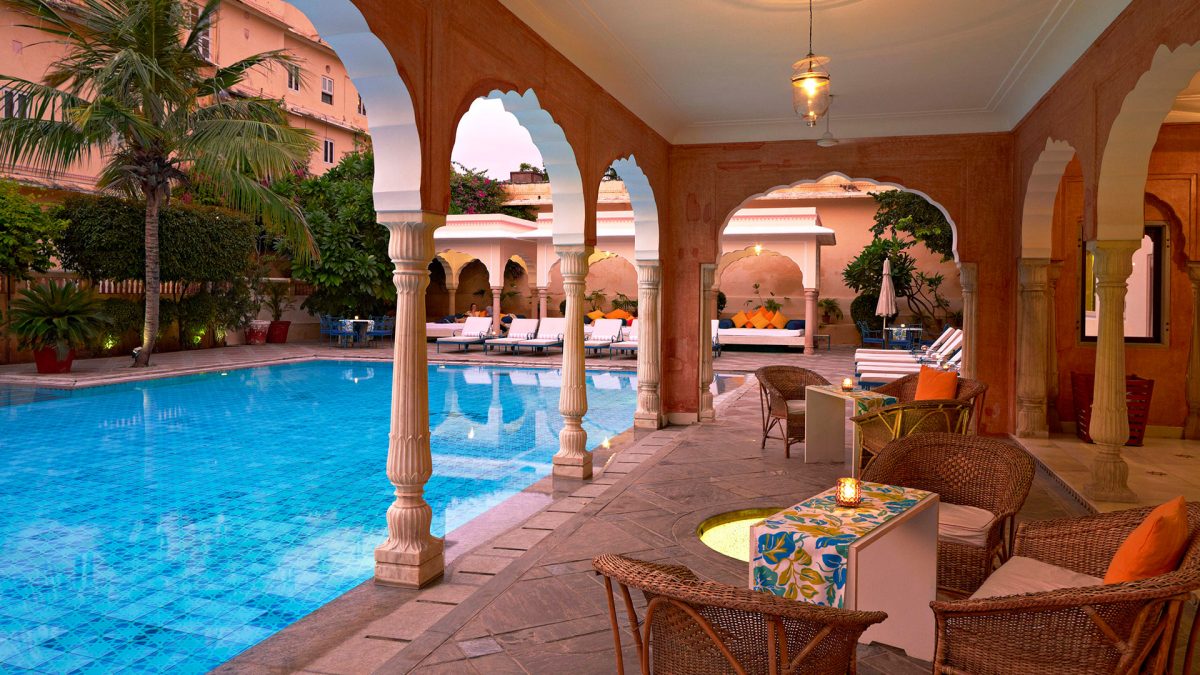 The Samode Haveli or the Samode Palace is an enchanting attraction in the Pink City. This palace hotel has been host to the likes of many movie stars, royals, artists, and other travellers. The ancient murals and the exceptional service are a great way to unwind during your stay.

This place in Jaipur is more than 400 years old, yet many high-end hotels are no match to its charm. One of the top places to visit in Jaipur, you must book your stay for some exceptional class treatment. 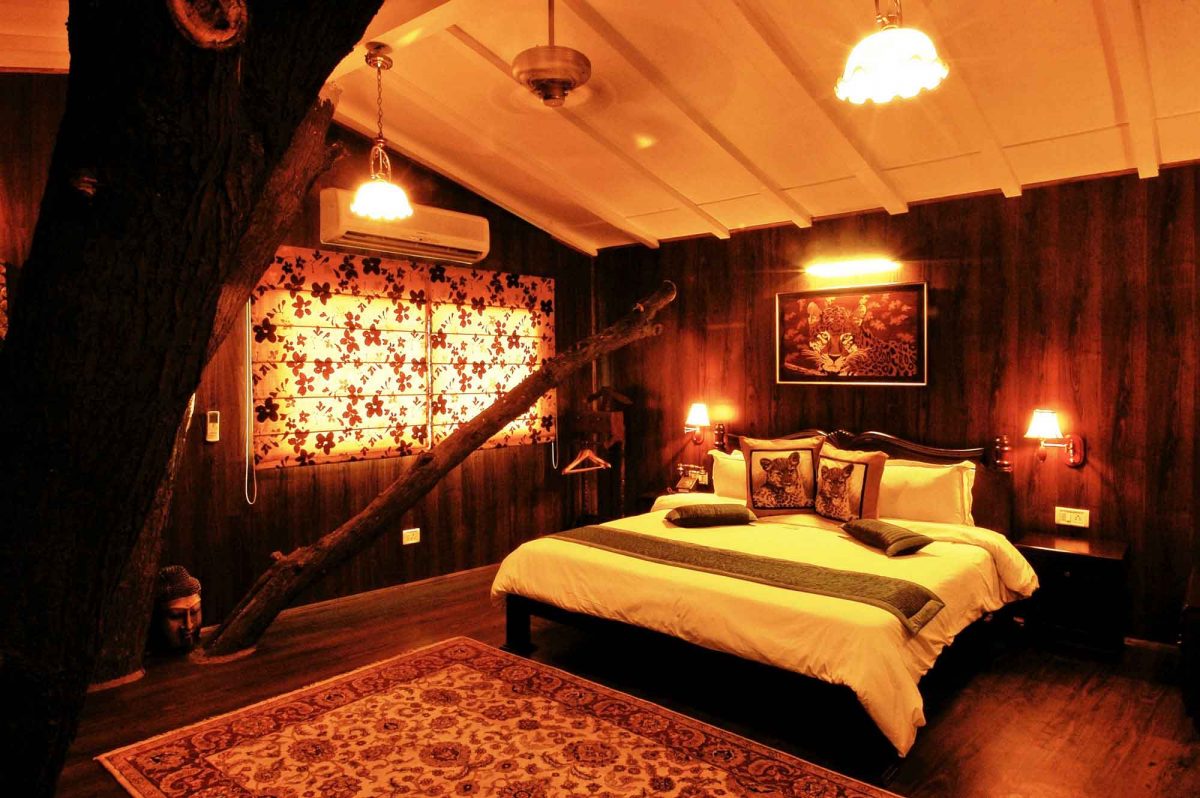 The Tree House Resort is one of the other great places to visit in Jaipur. You can go on a jungle safari, camel rides, or bird watching, all at one place. And the best part is living in one of the wooden nests built on huge Keekar trees.

These are nothing but luxurious accommodations with iron beds and leathered benches. Plus, you can also enjoy some outdoor movies, sitting under a sky full of stars. If you fancy games like archery and skeet shooting, you’ll get to try your hands at them too. 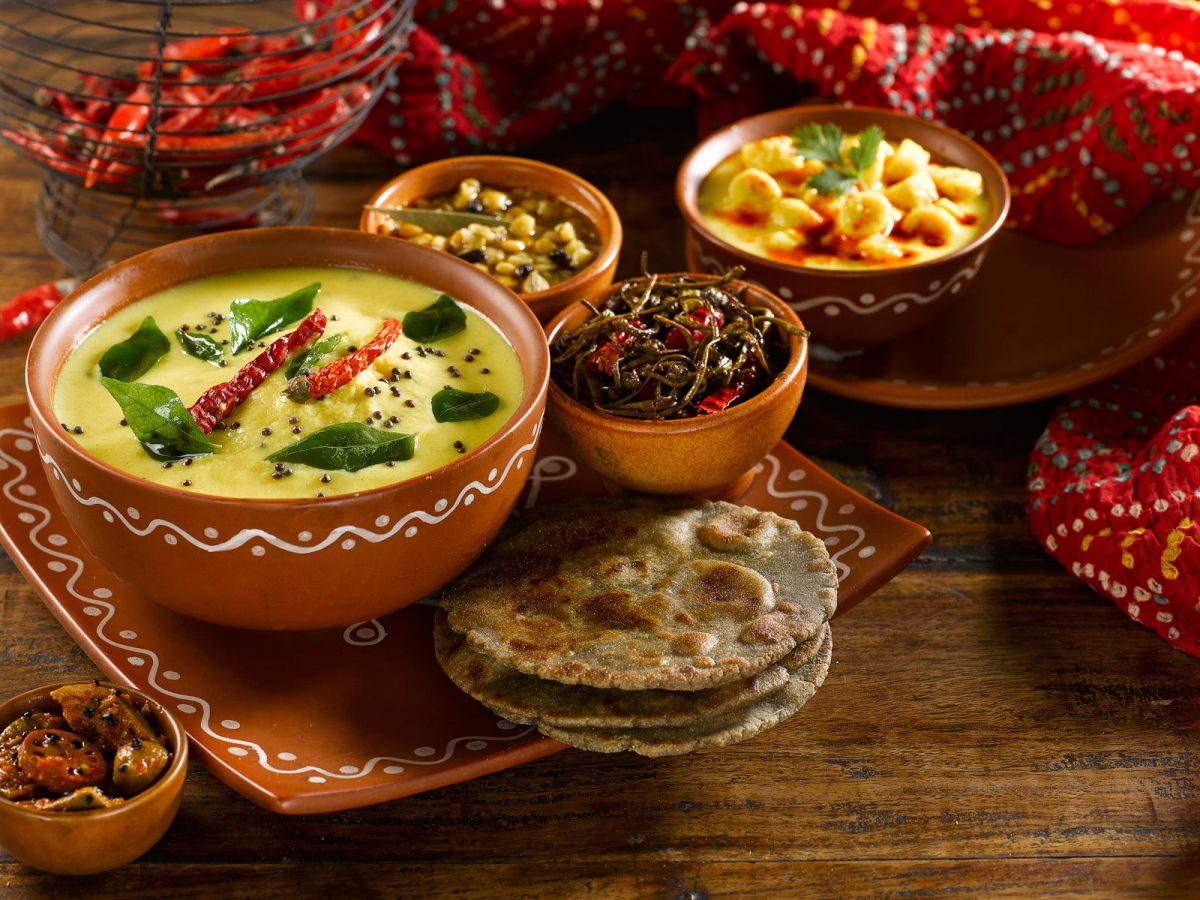 Dal-batti-churma, Ghewar, Lal Maas, Ker Sangri, Gatte Ki Khichdi, Boondo Raita, etc. These are only some of the delectable dishes of Rajasthani cuisines that sets apart Jaipur tourism from the rest.

Some of the famous spots to eat out are the Lassiwala, for the sumptuous buttermilk. Dzurt Patisserie and Café for authentic French delicacies, like croissants and pastries. And there are many more, for endless luscious treats and sweets.

Make The Most Of Jaipur’s Nightlife 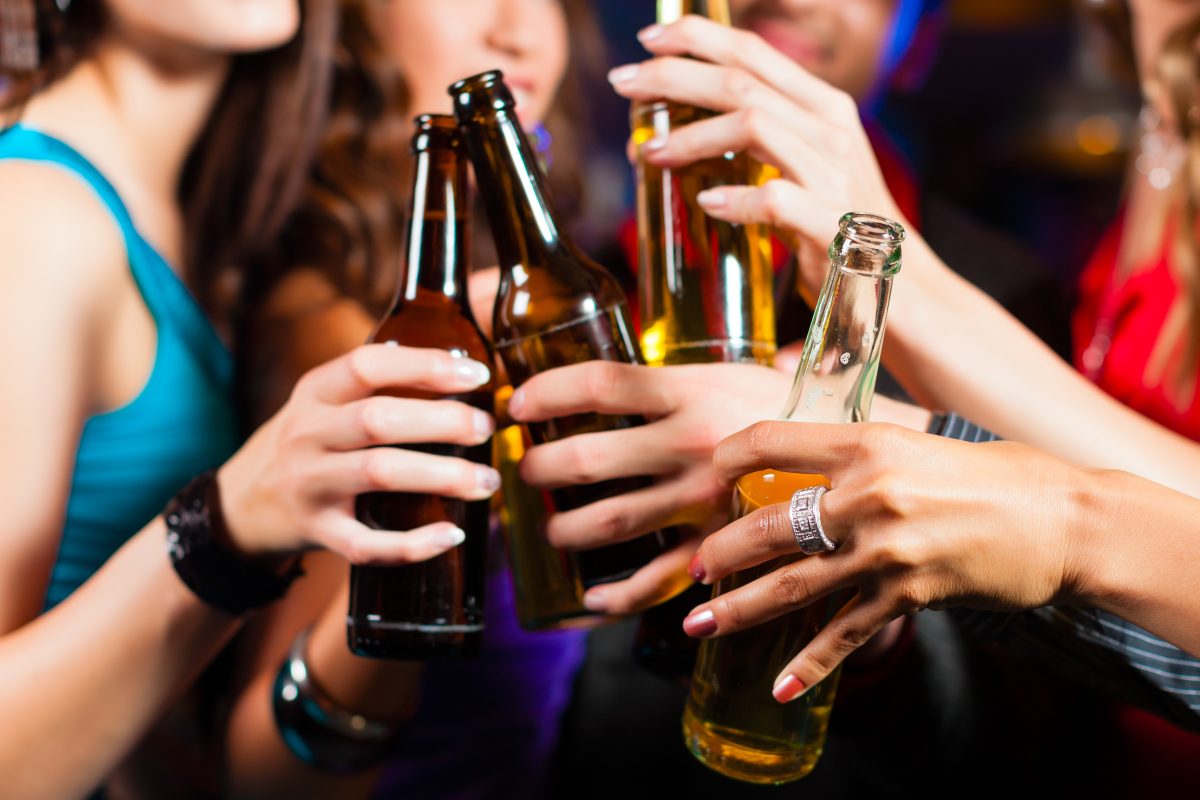 The lively Pink City is not all about age-old traditions, as its nightlife is equally vibrant. So you can easily find a nice bar or club and spin your body to some groovy tunes. Grab some whisky or vodka accompanied by some wondrous snacks. Plus, you’ll not even know the speed with which the hours go by.

Do You Know Why Jaipur Is Called The Pink City? 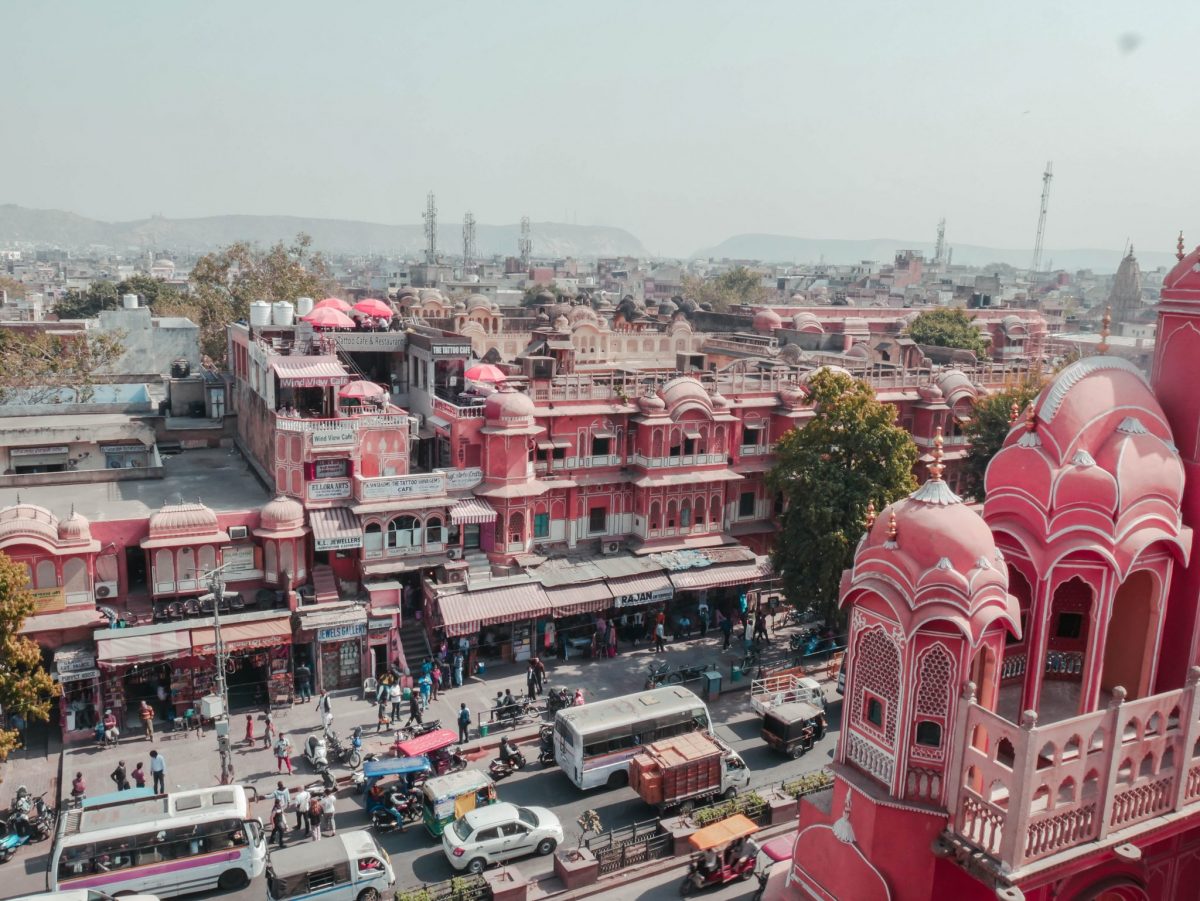 There are two reasons attributed to this terminology. Firstly, most of the houses are constructed with an exclusively pink stone, that’s mined nearby. Secondly, the naming comes from when the Prince of Wales and Queen Victoria were to visit Jaipur.

The Maharaja, Ram Singh of Jaipur, painted the entire city pink to welcome his esteemed guests. In due course of time, it became a tradition, and gradually a law that residents have to paint their houses pink. And thus the name, Pink City got permanence.

There is some magic about the city, as soon as you set foot in the city. From wildlife to heritage resorts, artefacts to cuisines, are all ready to impress one and all. You’ll surely be in awe of this fabulous city. So without much ado, plan your trip, and book your seats.

15 Reasons to Visit the Pamir Mountains
Prev: Why Do You Need B... Next: A Tropical Holida...