Antwerp is the second-largest city in Belgium and the biggest port in the country.

During the 16th century, Antwerp was one of the most important ports in all of Europe. The city suffered a lot during World War II, but luckily many of its medieval buildings survived the turbulent times. The diamond industry and trade still plays a significant role in the economy of the city as in the past.

Today Antwerp is a bustling city that has a lot to offer. It is a modern European city with a medieval charm. Every corner of the city will surprise you.

Explore Antwerp and learn about its urban legends, hidden mysteries, and secrets. Here is a list of things to do in Antwerp: 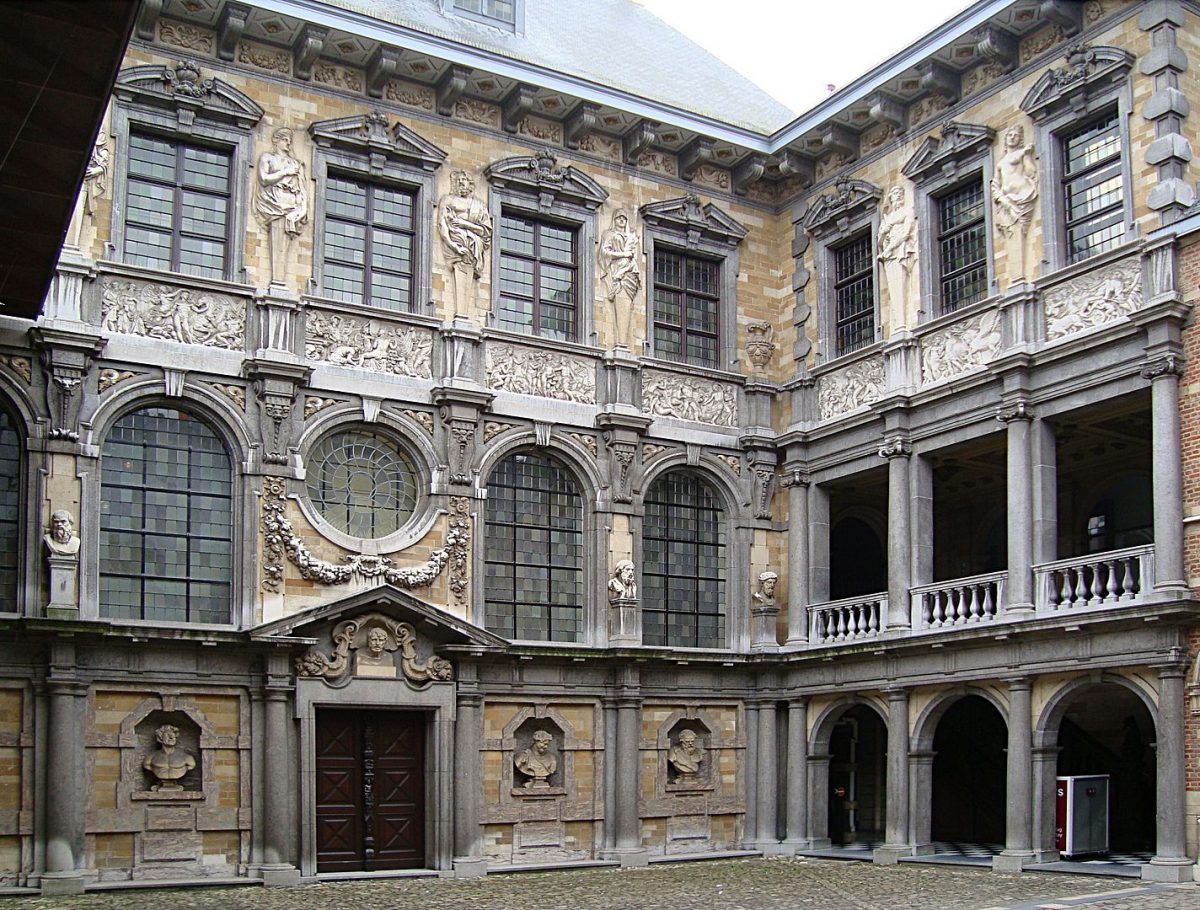 The Rubens House (Rubenshuis) is the former home and studio of the Flemish Baroque painter Pieter Paul Rubens. He purchased the house in 1610 and started an extensive renovation based on his own designs. After the renovations, the house and its courtyard garden got the look of an Italian palazzo.

Rubens lived in the house with his family from 1616 until his death in 1640. It was also his working place. He created many of his beautiful paintings (portraits, altarpieces, and landscapes) in this incredible palazzo, in the heart of Antwerp. After his death, the new owners made considerable changes to the house.

The building was in poor condition until the 1930s. Luckily it was rescued and saved for future generations. The city of Antwerp obtained it in 1937 and huge restoration work was started. Many parts of the house were brought back to their former state. Long story short, the former glory of the building was returned.

Now it is a museum dedicated mainly to the work of the painter and his contemporaries. It has an impressive collection of his works, including his very own self-portrait, but also shows how the master lived and worked. A lot of furniture from the 17th century is also on display.

The museum houses paintings from his pupils, including works of Anthony Van Dyck. The palazzo itself is a unique piece of art. Save some time to wander around the charming garden.

Admire The Cathedral Of Our Lady 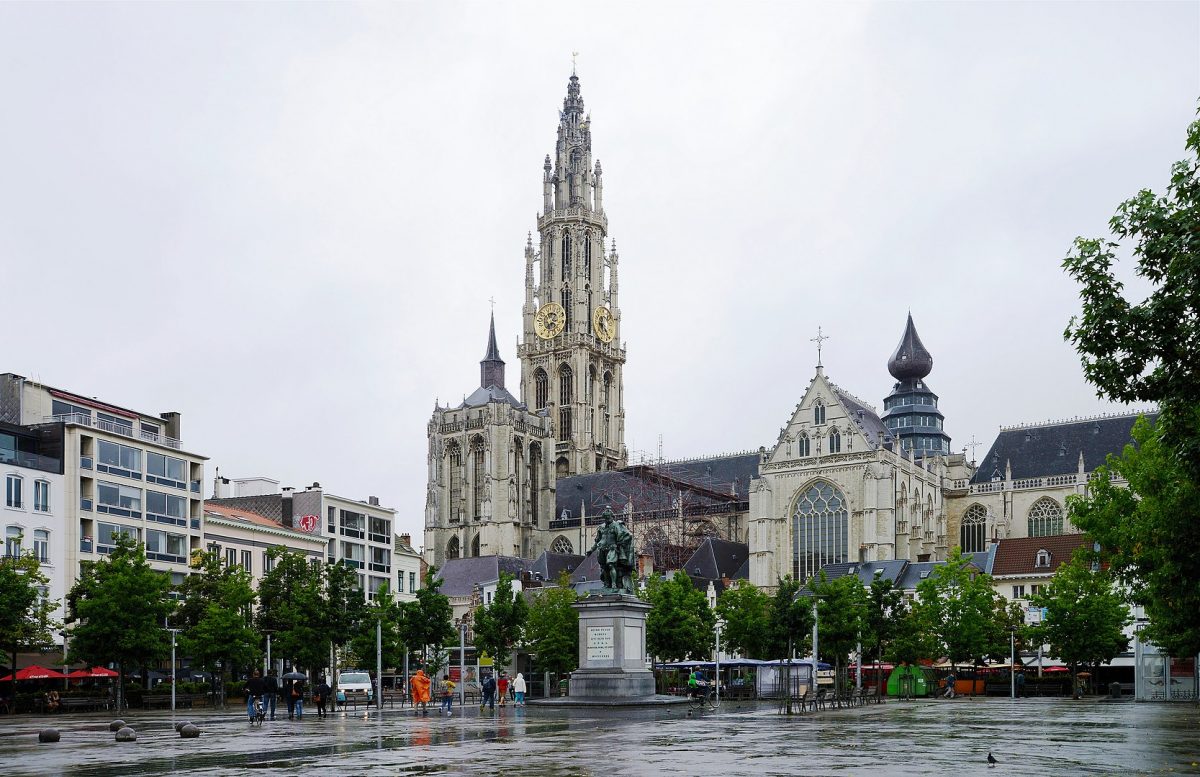 The Cathedral of Our Lady in Antwerp is the largest Gothic building in the Low Countries. Its bell tower is 123 m (404 ft) high and it is visible from many areas of Antwerp. It is the tallest bell tower in Belgium. The construction of the cathedral started in 1352 and it was completed in 1521. Now it is a UNESCO heritage site.

(i) Admire The Stadhuis 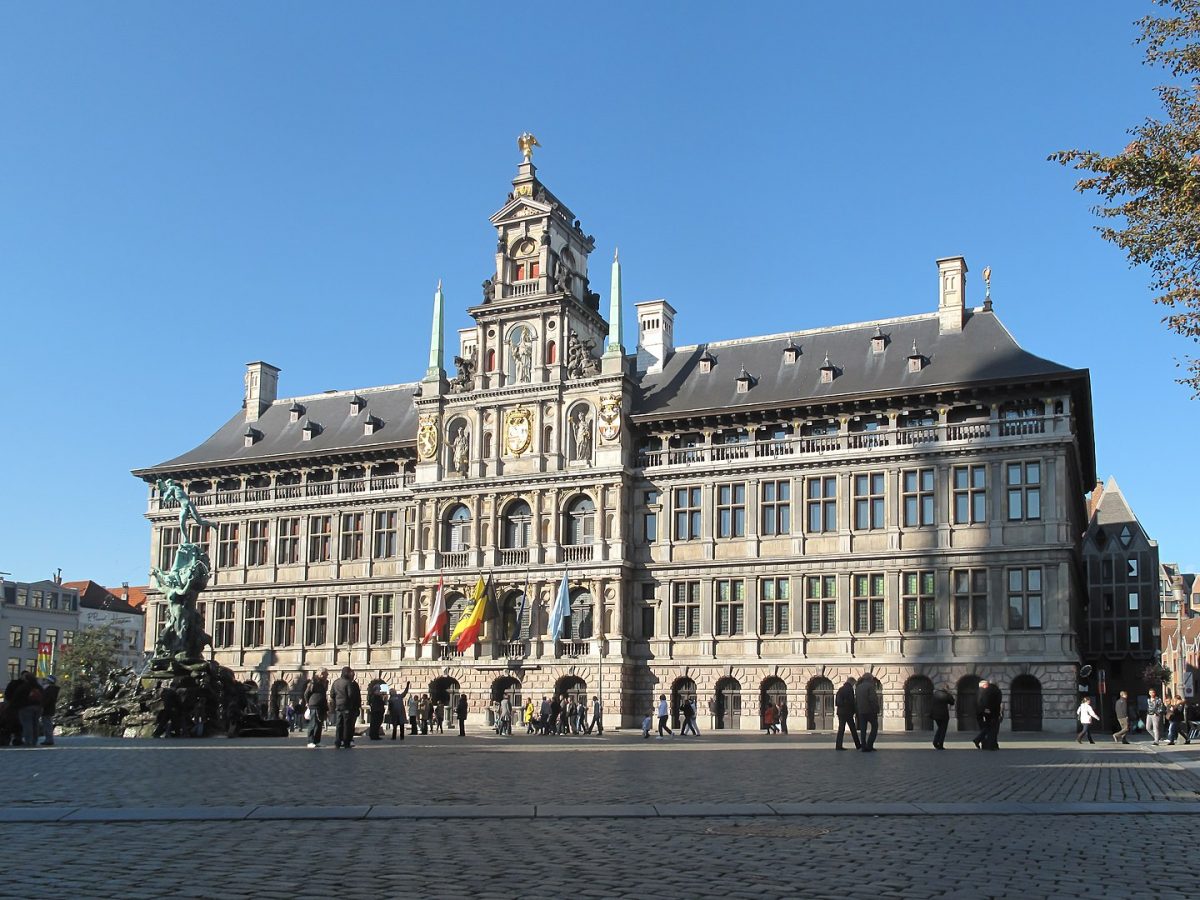 The Grote Markt is the historic main square of Antwerp located the heart of the old city quarter.

The magnificent building of the Stadhuis (City Hall) constructed in 1565 in Flemish Renaissance style dominates the relatively small square. It is undoubtedly the most impressive building on the Grote Markt, richly decorated with ornaments.

In the nineteenth century, the interior was luxuriously renovated. 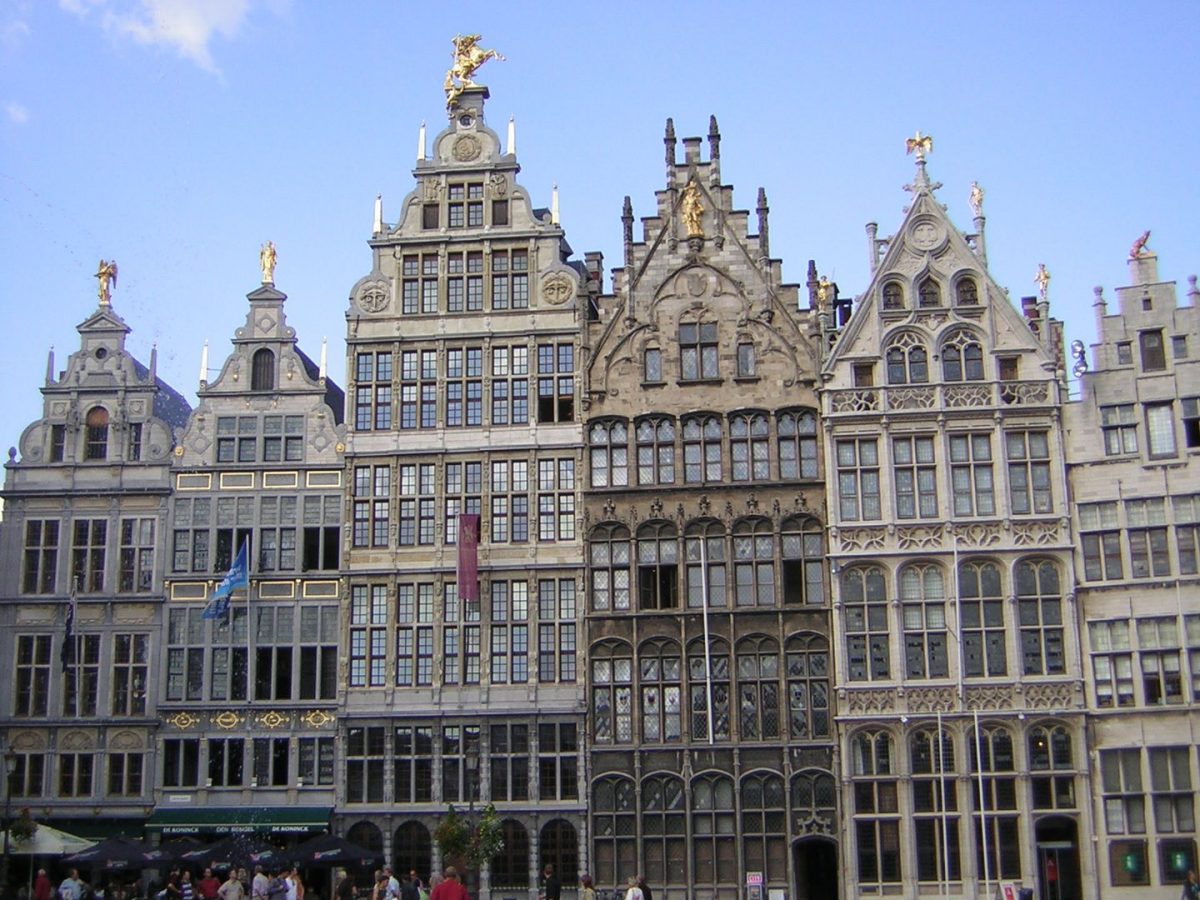 Other famous buildings on the Grote Markt are the elegant Guilds Houses which align the square. The lavishly decorated buildings that can be seen today are relatively new.

The fire of 1576 completely destroyed the original houses. They were restored to their original form, i.e. reconstructed in Flemish Renaissance style. But in the nineteenth century, they were renewed, resulting in the current look of the houses. There are beautiful statues on top of them. 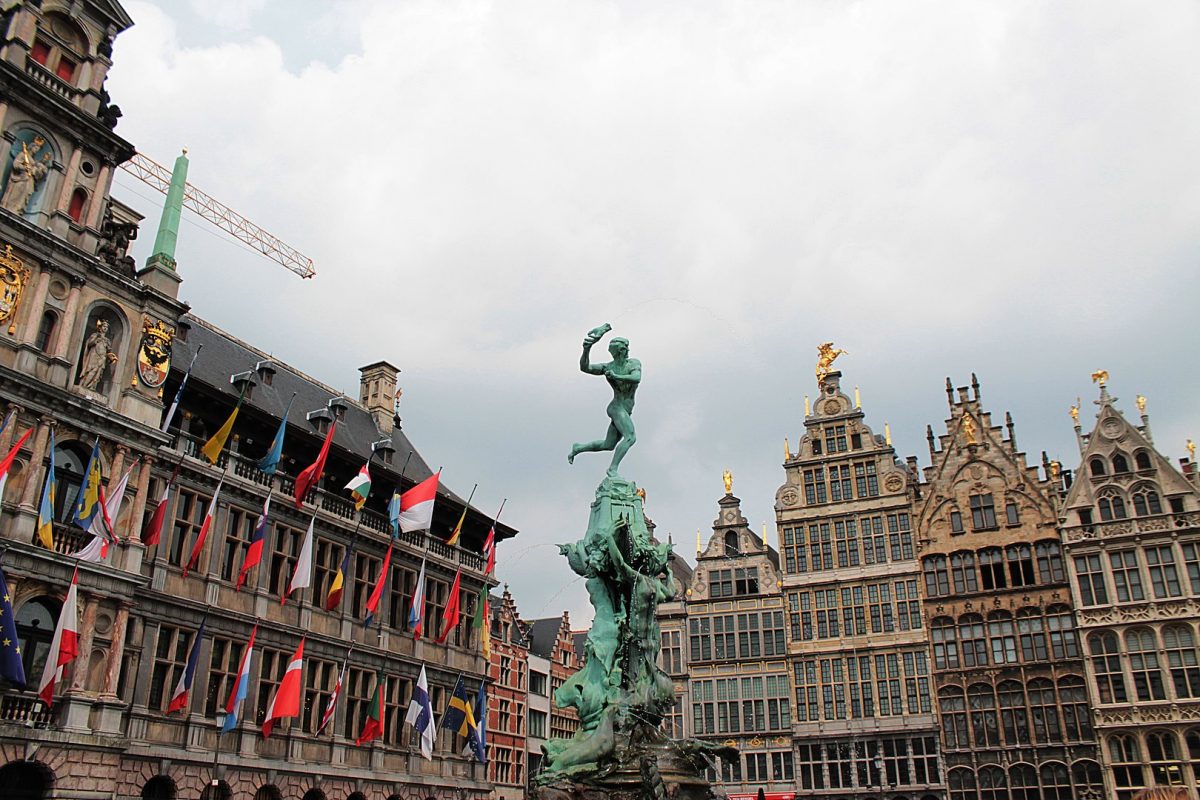 The centrepiece of the square is the large Brabo fountain, sculpted in 1886/1887 by the sculptor Jef Lambaux. The Antwerp’s most famous legend, probably created in the Medieval Period, tells the story of the mythical hero Brabo and how he slew the giant Druon Antigoon.

According to the legend, the giant used to cut and throw the hands of the sailors into river Scheldt if they refused to pay a high toll for the ship when entering the city until the captain of the Roman army Silvius Brabo fought the giant, killed it, cut its hand and head, and threw the hand into the river.

The fountain’s statue depicts Brabo as he throws the giant’s hand into the river Scheldt. It is said that Antwerp owns its name to that story as the Dutch words “(h)ant” (hand) and “werpen” (throw), means “to throw a hand”. The symbol of the hand can be seen throughout Antwerp. There are even biscuits, known as Antwerp Hands, with the hand shape. These cookies are one of the most famous regional products from Antwerp.

Learn About Old-Fashioned Printing In The Plantin-Moretus Museum 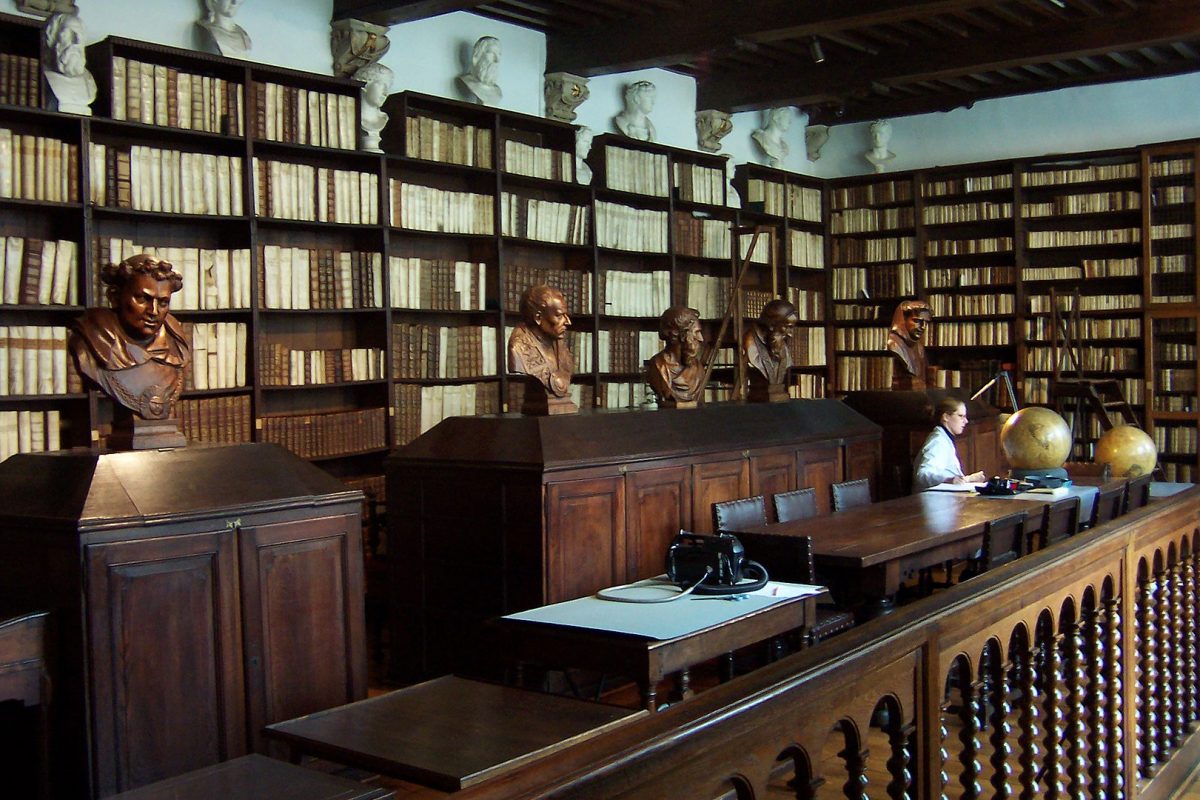 The Plantin-Moretus Museum in the center of Antwerp is the only museum on the list of UNESCO World Heritage Sites. This building was once the printing workshop and residence of the Plantin-Moretus publishing family and many of the old printing tools have been preserved at the museum, including two of the world’s oldest printing presses, which date back to the 16th century. Some of the tools date back even to the 15th century.

This former printing press was once one of the world’s best. Since 1876, the site has been home to a museum that honors printers Christophe Plantin and Jan Moretus.

The building itself dates back to the Middle Ages and is worth a visit together with the lovely courtyard.

Explore the world’s oldest printing press, a library dating back to the 17th century and a collection of precious artworks and learn why Plantin-Moretus Museum is a Unesco world heritage site.

Without a doubt one of the best places to see in Belgium. 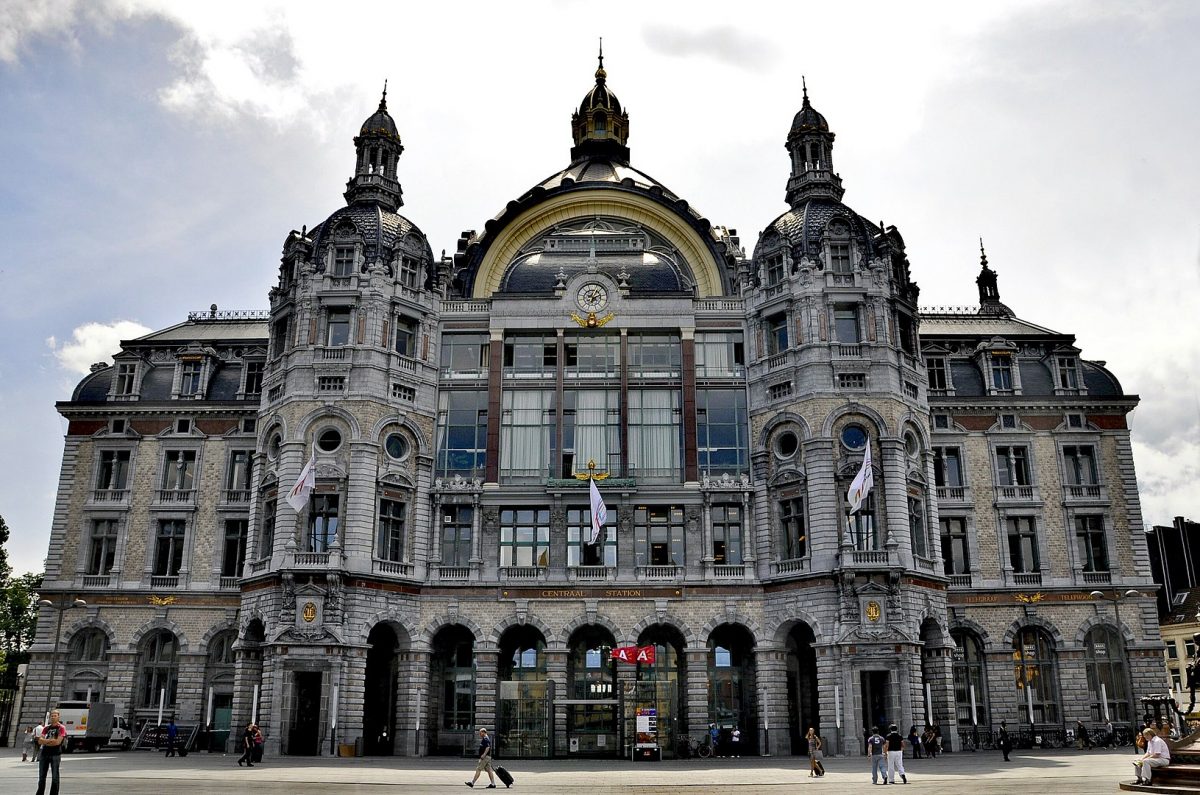 The Antwerp train station is one of the best places to see in Antwerp. If you arrive in Antwerp by train, it will be the first place to see in the city. Antwerpen-Centraal is without a doubt one of the world’s most beautiful train stations. The exterior and the interior of the building are both impressive and they will leave you speechless.

However, the Antwerp train station is not just beautiful architecture. Recently restored, it was fully adapted with multilevel platforms to operate in the 21st century. There are four levels at the station, 2 of which are underground.

The station operates since the beginning of the 20th century. It was built between 1895 and 1905 on the place of an older wooden train station constructed in 1854 by engineer Auguste Lambeau. The authors of the “new” Antwerp train station are Louis Delacenserie and Clément Van Bogaert.

As many styles were used in its construction, it can not be described as a specific architectural style.

The monumental domed main entrance hall that faces the Astrid square is the most impressive part of the Antwerp train station. 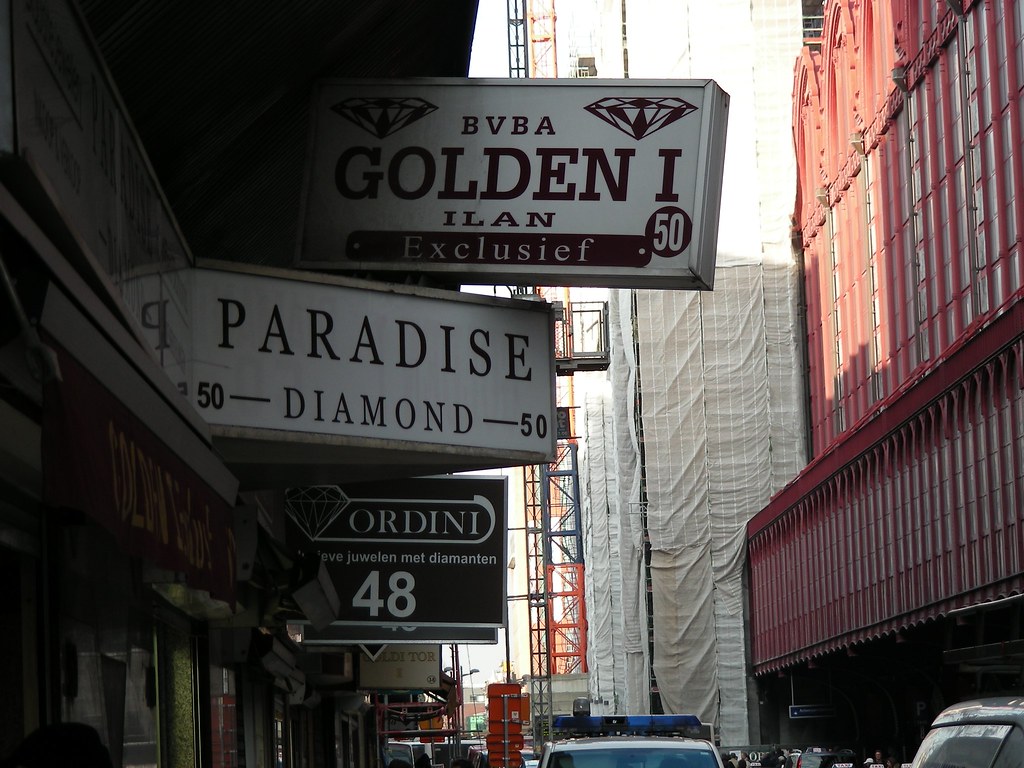 Antwerp is the diamond capital of the world. Right next to Central Station is the Antwerp’s Diamond District (Diamond Quarter). Diamonds were being traded in Antwerp since 1447. In the 19th century, the city became a centre for the diamond trade and it is still today.

Nearly 84% percent of the world’s rough diamonds pass through Antwerp, and more than 1700 diamond companies are based here.

There are plenty of shops selling diamond jewellery. Most of them are open every day except Saturday. However, if you are not buying diamonds, not much to see here. 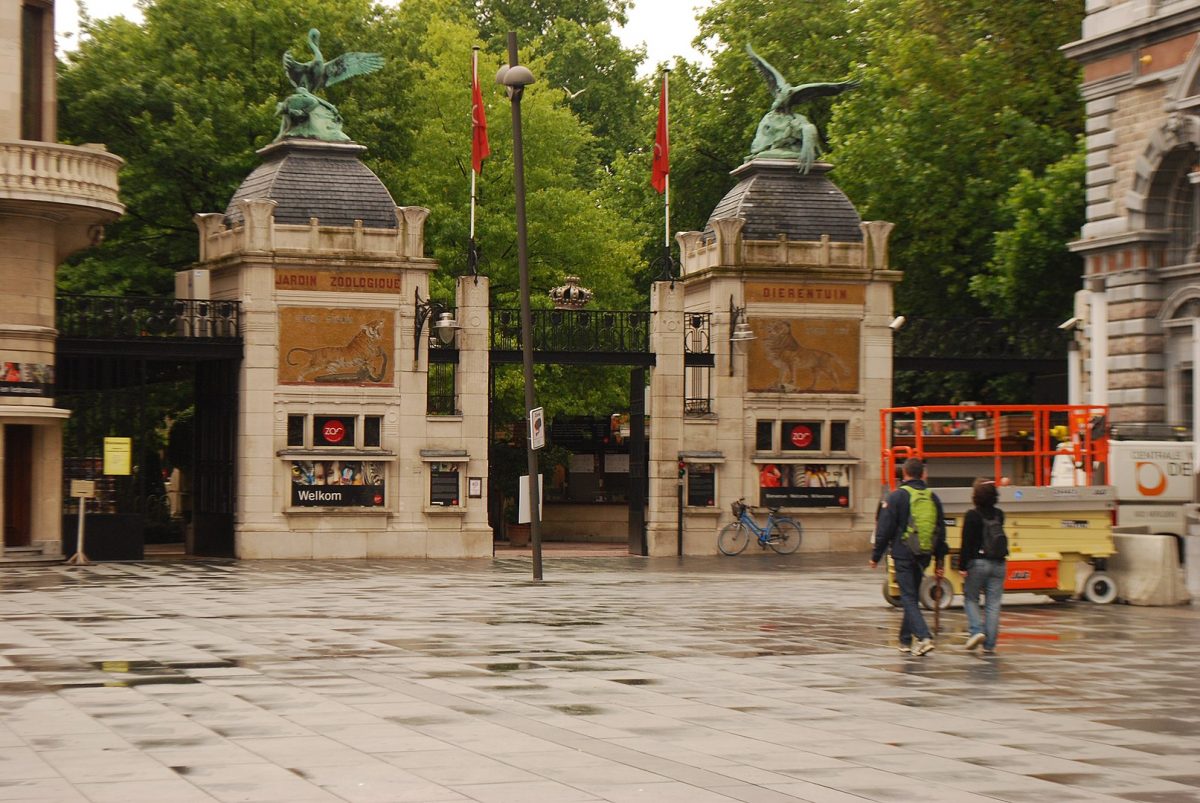 Founded in 1843, the Antwerp Zoo is Belgium’s oldest animal park and one of the world’s oldest. This historic zoo is situated right next to the railway station of Antwerp Centraal in the centre of Antwerp.

Antwerp Zoo is considered by locals and tourists as one of the best things to do in Antwerp.

As there are indoor and outdoor attractions, Antwerp Zoo can be visited at every time of the year. There are all kinds of activities and shows and you can easily spend an entire day here. It has more than 5.000 animals and more than 950 species. There are magnificent gardens too. Tour this beautiful zoo and do not forget to bring your camera.

Do Not Miss The Red Star Line Museum 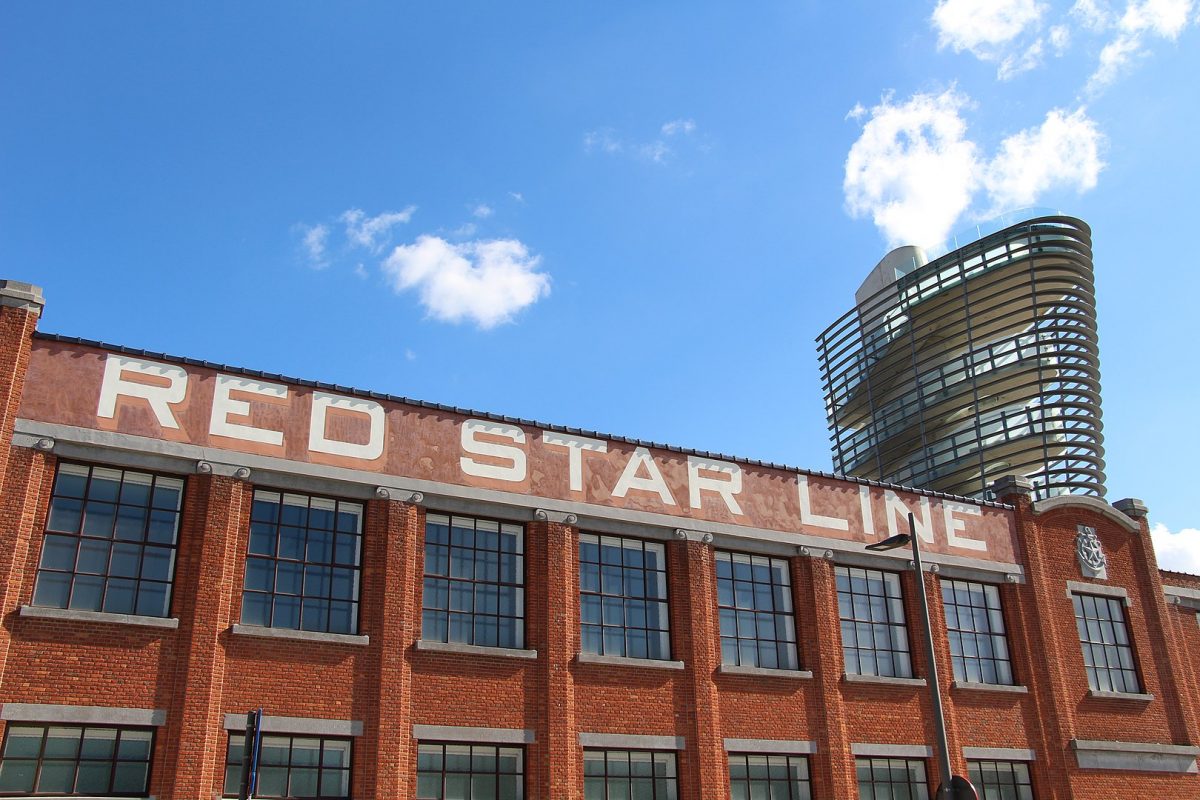 Photo by Fred Romero CC BY 2.0 (from Wikipedia)

The Red Star Line Museum will definitely bring some tears in your eyes. It tells the stories of the migrants who left Belgium and sailed to North America in search of a better life.

Over two million passengers from Europe travelled to North America in the 1800s via Red Star Line ships from Antwerp, the main European port of the Red Star Line.

Most of the passengers took off from the very building that now houses the museum. There are beautiful old photographs, many personal items and emotional testimonials that quite vividly tell the story of the migrants.

A story that in our time is still important to tell and very interactive and ideal for kids.

Climb to the top of the former building’s chimney, now an observation tower, for excellent views of the surrounding area. The Red Star Line Museum is without a doubt one of the best things to see in Belgium. 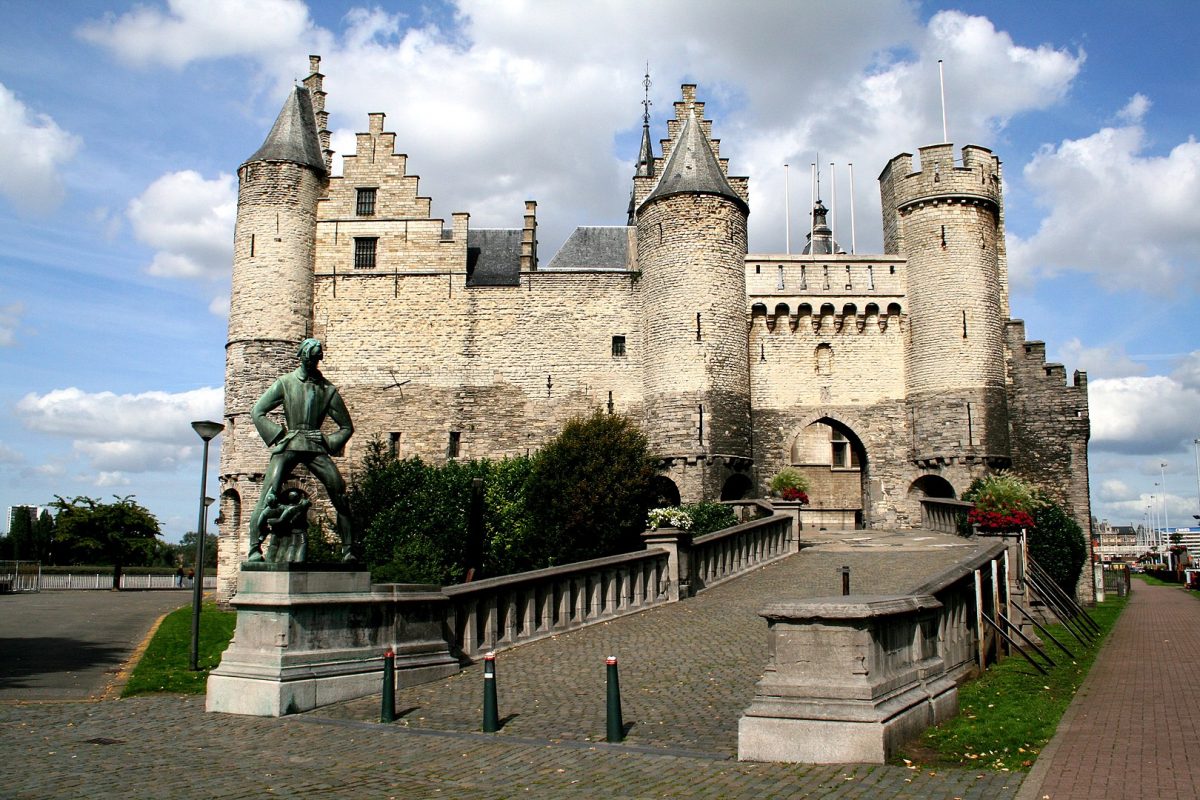 Het Steen is a small but lovely castle along the Scheldt River just a few minutes walk from the Grote Markt.

The castle dates back to the beginning of the 13th century and it is Antwerp’s oldest building. Het Steen was a prison till 1823.

It opened as a museum in 1862 after serving for a short period of time as a residence, sawmill and fish depot.

It was the Museum of Antiquities at first and served as the National Maritime Museum from 1952 to 2008. Now, this collection is in the Museum aan de Stroom. This ancient monument is currently under renovation. It will be the gateway to Antwerp in 2020 and will serve as a welcome centre, cruise terminal and interactive experience route.

The focus of the experience centre will be the history of Antwerp, but also the past, present and future of the castle. In the meantime wander around this attraction and take some photos of it.

There is a statue of a giant and two people at the entrance bridge to the castle. It depicts the giant Lange Wapper, a Flemish folkloric character, who used to terrorize the citizens of Antwerp in the Middle Ages. He is a legendary trickster and giant whose folk tales were told in the city of Antwerp and the neighbouring towns in particular. 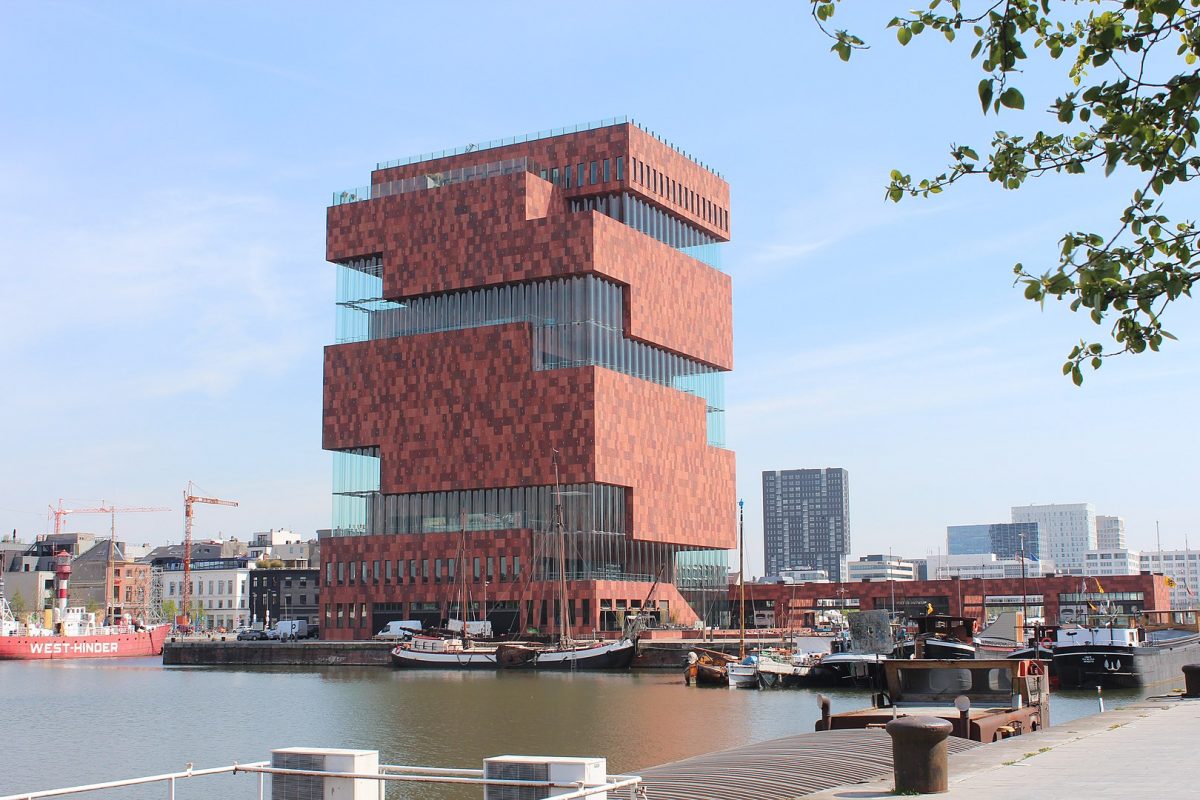 The MAS (an abbreviation of the Flemish – Museum aan de Stroom, which means museum by the river) is a modern museum located along the river Scheldt in the Eilandje district, the old dockside area of Antwerp. The city’s largest museum is placed in one of the most modern buildings in Antwerp, constructed mainly out of sandstone and glass.

The MAS is a relatively new museum (opened in May 2011). It tells the history of Antwerp, especially its role as a significant international port, but also features temporary exhibits. The museum has a collection of more than 470.000 items, but not all of them are on display. Explore the collections, including ethnography and maritime history. The open-top roof is a must. It offers amazing panoramic views of the city. 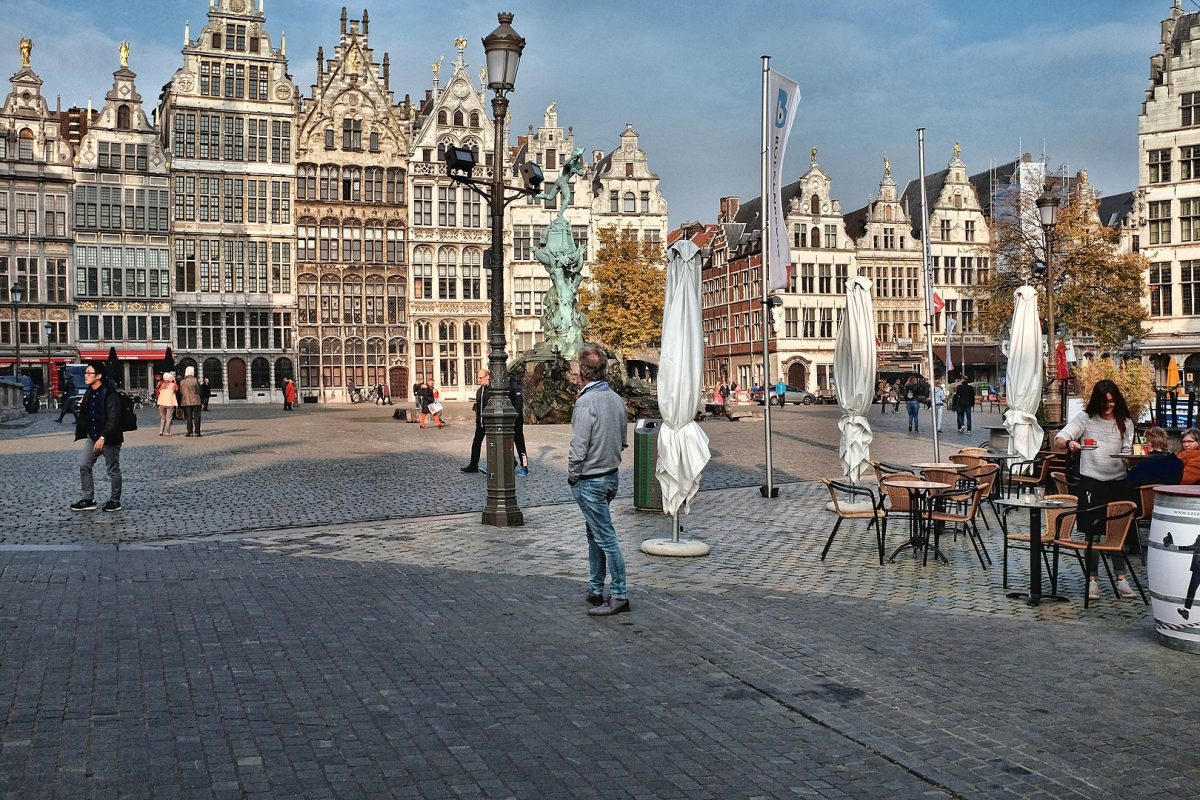 The Belgians are proud of their beer and sampling a few cold beers in Antwerp is a must. Visit the Antwerp Brewery and learn about Belgian beer while sampling a glass of De Konninck beer at the site where it is produced. You can also visit Paters Vaetje, situated next to the cathedral, which serves more than 100 beers or you can visit other pubs. Actually, you will always be close to a pub wherever you are in Antwerp. Antwerp is the city with the most pubs per capita in the world.

The French fry’s origins were traced back to Belgium, where historians believe that potatoes were fried in the late 1600s. Eat french fries while in Antwerp. There are many restaurants which serve delicious fries.