The Royal Palace of Amsterdam (Koninklijk Paleis van Amsterdam or Paleis op de Dam) is placed on Dam Square in the heart of the city of Amsterdam, next to the 15th-century Nieuwe Kerk (New Church). The story of the palace begins in the 17th century (during the so-called Dutch Golden Age). At first, it was a Town Hall for the magistrates of Amsterdam. According to some sources from the era, it was the largest administrative and secular building in Europe during the 17th century.

This 350-year-old magnificent building is a unique piece of art worth a visit. The Royal Palace is amazing as well as impressive in size. The building’s central hall, known as the Citizens Hall, is 120 feet long, 90 feet wide and 60 feet wide. This hall is the largest and grandest room in the palace. Two world maps (the Eastern and the Western hemisphere) and a map of the celestial hemisphere are drawn on the central part of the hall’s marble floor. There is a large domed cupola on top of the palace and a weather vane in the shape of a cog ship atop of the cupola. The ship symbolizes Amsterdam.

Where is Amsterdam located, maybe you’re asking? Amsterdam is the capital of the Netherlands. A country positioned in northwestern Europe between Belgium in the south, Germany in the east and the North Sea in the north and west.

History Of The Royal Palace 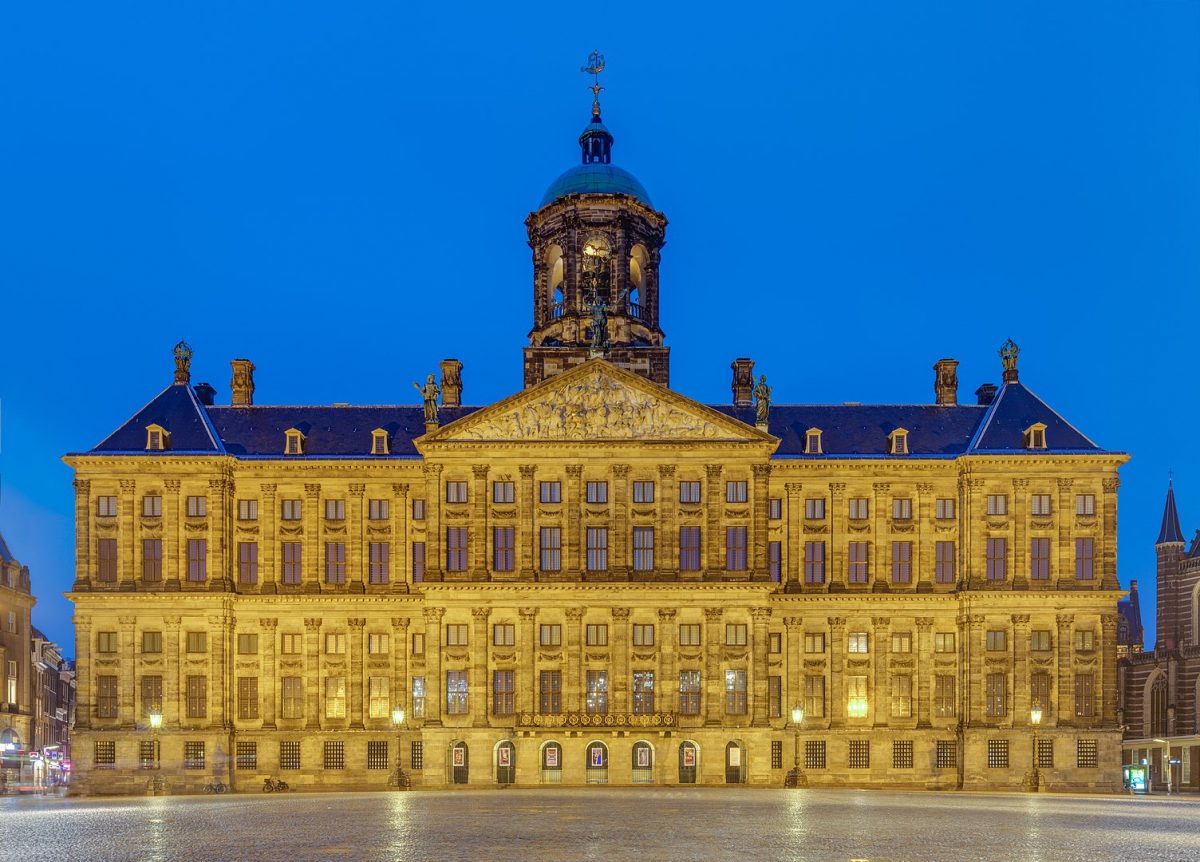 The main architect of the building was the renowned Jacob van Campen. He became head of the project in the middle of the 17th century. The historical documents tell that his main inspiration for the design of the Town Hall of Amsterdam was the Stadhuis (City Hall) of Antwerp, Belgium. He used Roman administrative palaces and other public buildings as inspiration too. His idea was to construct a new capitol for the burgomasters who considered themselves to be the consuls of the new Rome of the North.

The entire building was made of a yellowish sandstone brought from Bentheim in Germany. However, the passage of time and the elements have done its job quite successfully and the sandstone of yellowish hue has darkened considerably throughout the centuries. However, the exterior of the building is still outstandingly beautiful. Marble was the material chosen for inside.

The Royal Palace is famous for its impressive and rich decorations. Many great artists of the time worked on the exterior and interior of the building. Famous painters, like Rembrandt and Ferdinand Bol, left their mark in the design of the interior. Renowned sculptors worked on the project too.

Most of its paintings and sculptures portray the prestige and the power of Amsterdam during the Dutch Golden Age. The burgomasters and the magistrates opened the first section of the building on 20 July 1655.

For a century and a half, the building served as Town Hall. 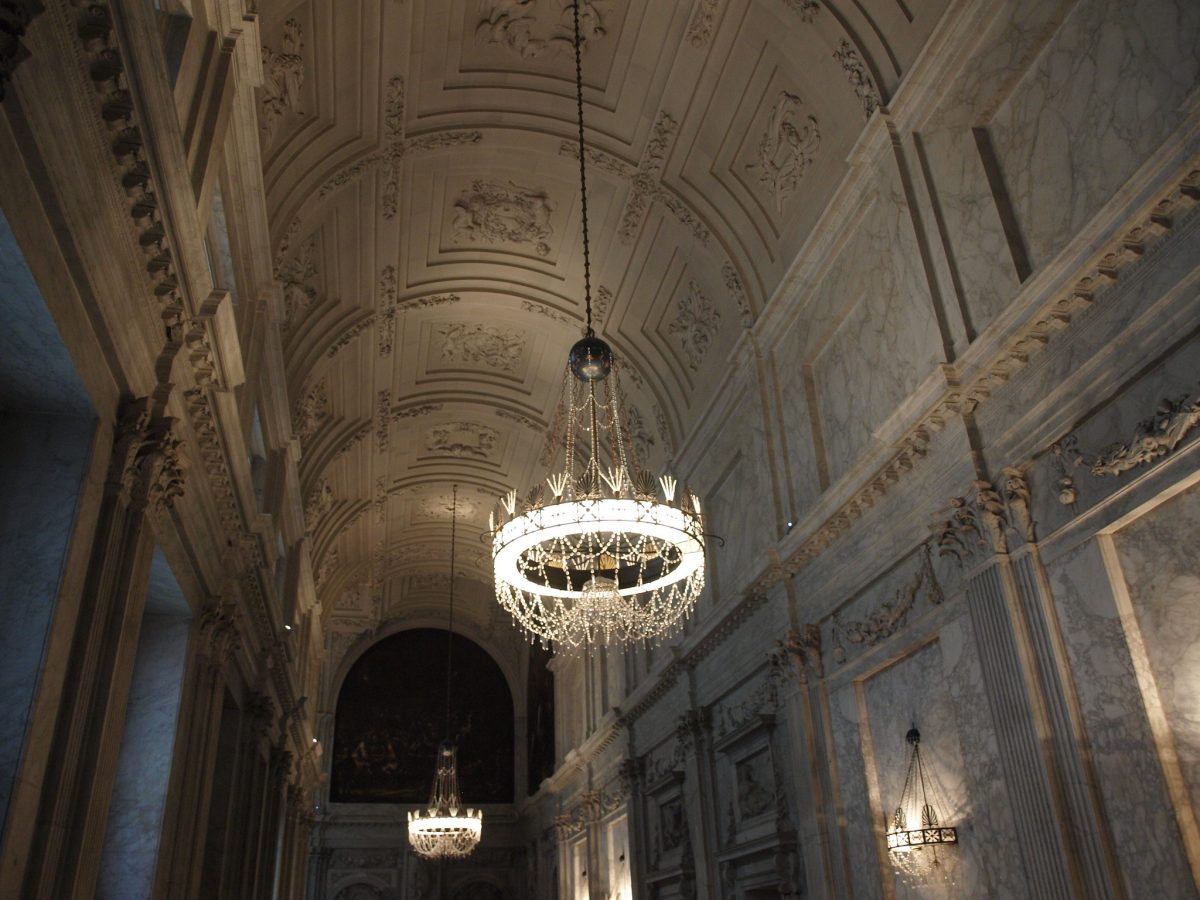 In 1806, the Republic of Batavia was forced to accept as the King of Holland Louis Napoleon, the French Emperor’s brother. At first, Louis Napoleon chose to live in The Hague, but in 1807 he decided to relocate to Amsterdam. He took ownership of the Town Hall in 1808 and converted it to a Royal Palace with Empire-style decoration.

Palace Of The House Of Orange For The Past Two Centuries 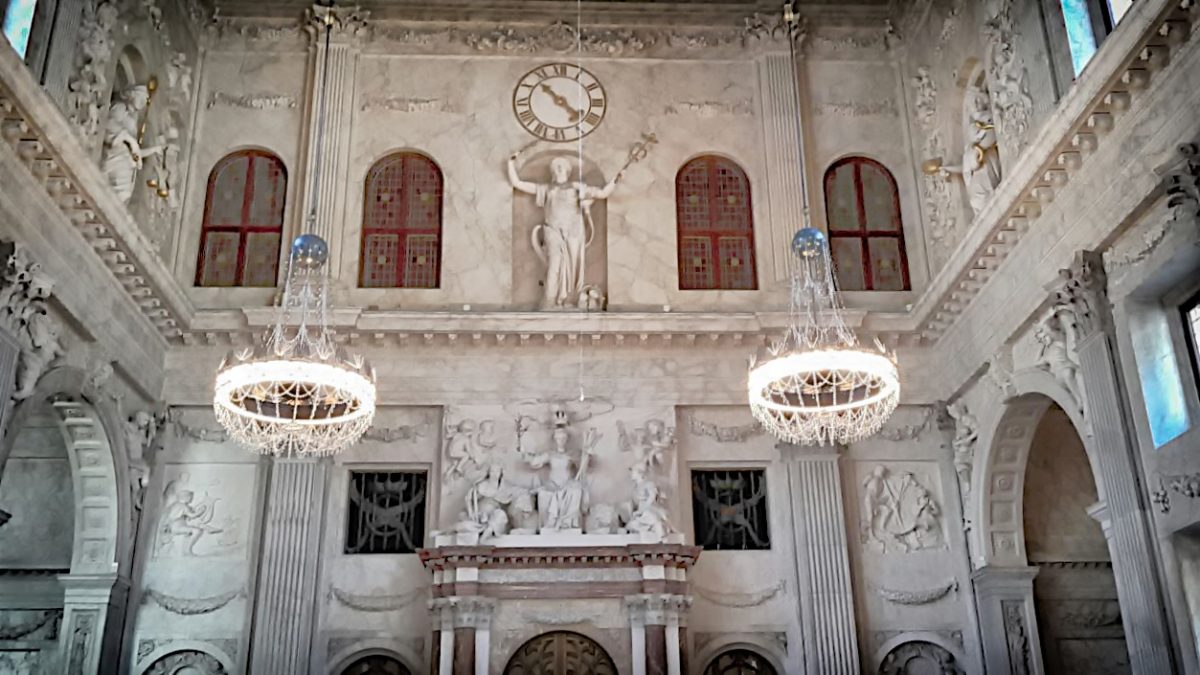 Prince William VI, later King William I, returned the palace to the city of Amsterdam after the crucial Battle of Leipzig, also called Battle of the Nations, (Oct. 16–19, 1813), which ended with a decisive defeat for Emperor Napoleon and therefore led to his downfall.

However, after his investiture, the new King realized the necessity of having a residence in the capital and requested the city officials to make the palace once again available to him. The Royal Palace did not become a property of the Kingdom of the Netherlands until 1936. 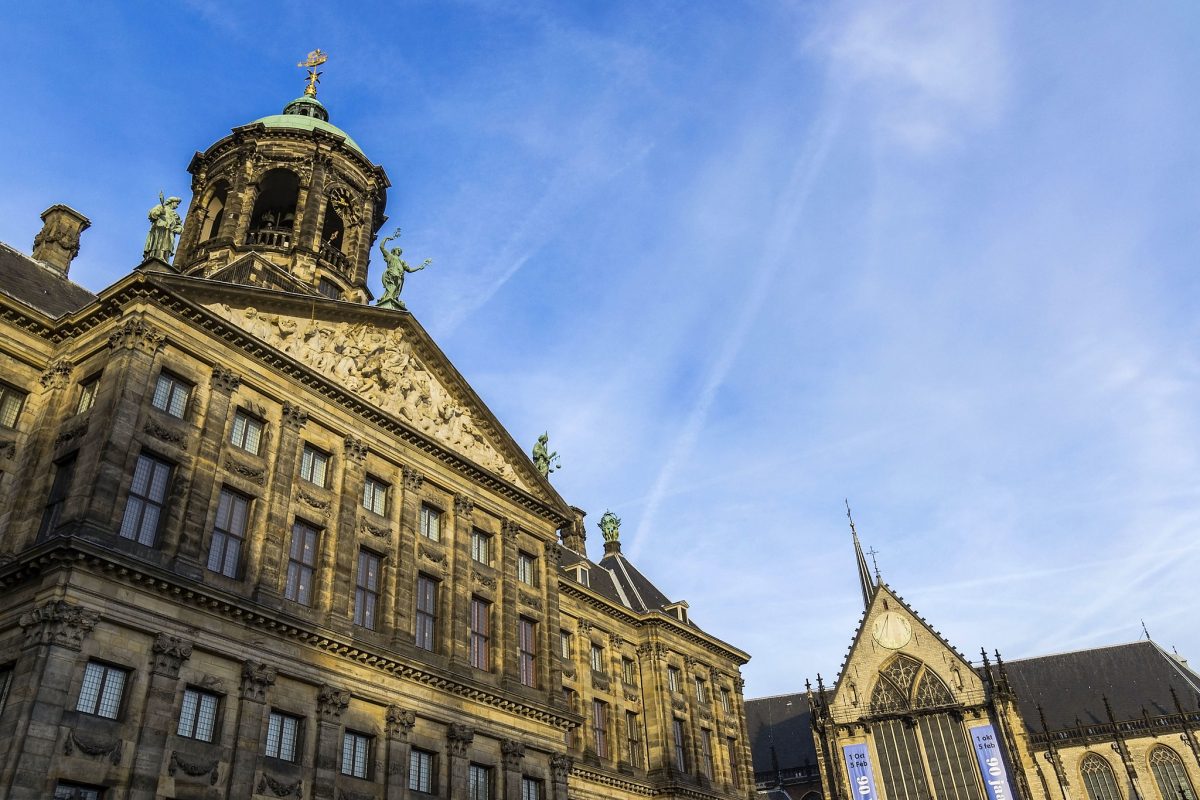 Now the Dutch Royal House uses the Royal Palace of Amsterdam. It is one of three palaces (along with Huis ten Bosch and Noordeinde Palace) in the Netherlands that are put at the King’s disposal by an Act of Parliament.

The palace is not King Willem-Alexander’s place of residence. The Dutch Royal family uses it mostly for Royal Events such as receiving leaders of other countries during their visits to the Netherlands, the King’s New Year reception, gala dinners, award ceremonies and other official receptions. 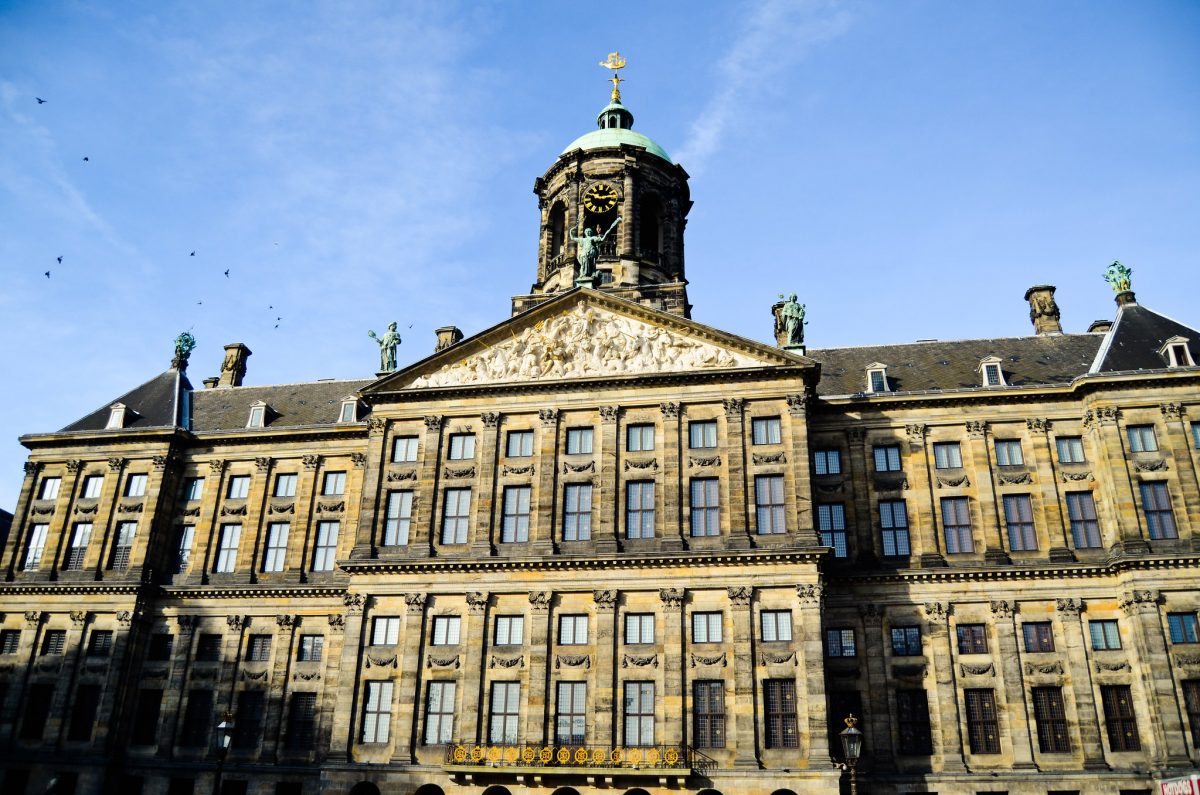 However, the Royal Palace is also open to visitors throughout the year. Visitors are welcome to discover the rich history and interior of this majestic building.

Enter the palace and discover the world of royalty. The marble floors, murals, giant chandeliers, elegant carvings, arched ceilings, beautiful classic paintings and sculptures without a doubt will leave you speechless. There are permanent, as well as many temporary exhibitions.

Long story short, The Royal Palace’s interior and exhibitions are certainly worth a visit.

Walk these impressive marble halls and explore the interior. Admire the paintings and the sculptures made by the most famous artists of the Dutch Golden Age. See where royal events and state banquets take place. On the walls of the rooms in the palace, there are artworks from the collection of the House of Orange-Nassau Historic Collections Trust. Observe the works of art from famous artists such as Rembrandt, Jan Lievens, Ferdinand Bol, Govert Flinck and Jacob Jardaens. Many paintings show the various members of the family of Orange-Nassau.

See also the well-preserved imperial furniture, clocks and chandeliers, purchased by Louis Napoleon. This magnificent collection is one of the best-preserved and most complete collections of Empire furniture in the world.

You can take your own time exploring around or book a one-hour tour. The guided tours will make your visit more enjoyable and informative but have to contact the museum to make reservations two weeks in advance.

Royal Palace opening hours: most of the year it is open daily from 10 am to 5 pm. If you want to see on which days the Palace is closed to the public and to find more information about the palace, visit the Royal Palace website.