Morocco is quite an exotic and medieval country to travel to. Roaming around the streets of Marrakesh and Medina is a different kind of experience you do not get elsewhere. It does feel like going back in time to the ancient times. Moreover, it is just as beautiful as it is ancient. With some medieval and old practices of trade and manufacturing still in use today, it makes for quite an interesting trip. Visiting the city of Fez, Morocco is quite an adventure and you can get guidance from our list below.

Getting To Fez From Rabat And Casablanca

You can reach Fez from Rabat and Casablanca by train.

Traveling to Fez, Morocco is just as wild of an experience. Not only do you get to see, but also experience firsthand the living style, culture of this medieval city. To a traveler, experiences count is like currency in a video game and that is where we come in. Here we have compiled a list of what you can do in the wonderful city of Fez.

Let us have a look at some of the best experiences you can have traveling around the city of Fez, Morocco. 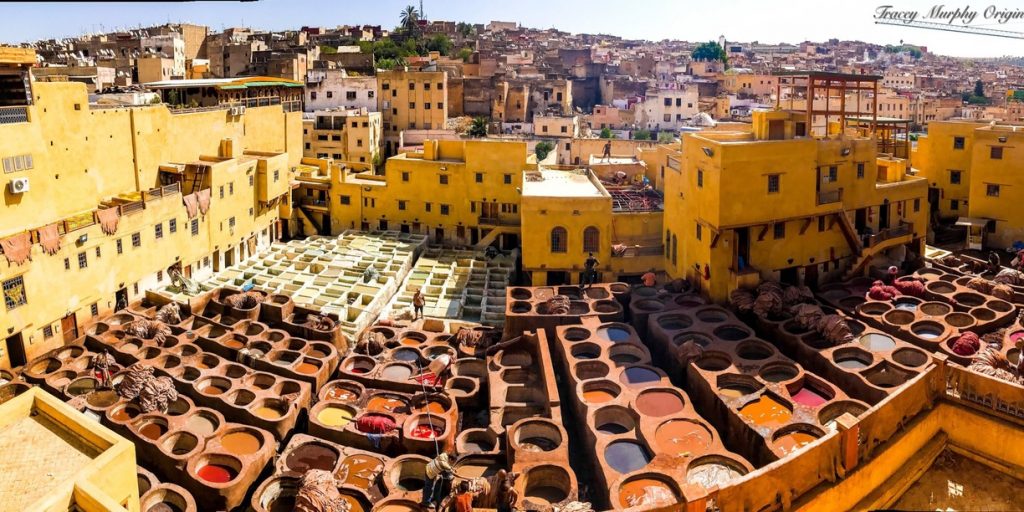 Chouara Tannery is one of the oldest tanneries in the world. To this day, it still uses the medieval method of manufacturing leather and is a must-visit spot to mark off in Fez, Morocco. Moreover, as the tannery is surrounded by houses and shops for the locals, it doesn’t exactly make for a very pretty sight.

But, as it is a part of the city, you get to see how leather comes out using their traditional methods. Another thing to keep in mind before visiting the tannery is the intense smell. You definitely want to keep your nose and mouth covered properly. A cloth alone may not suffice so keeping some fragrant element like flowers or mint might help.

By coming here you get to witness first hand how leather has been manufactured by humanity for ages. It is quite an experience and a must visit when visiting Fez. Another thing to keep in mind, the locals and traders around might offer you the cloth and mint to cover your nose for some money. This means you do not necessarily have to keep special cloth and mint hassles in your travel luggage. 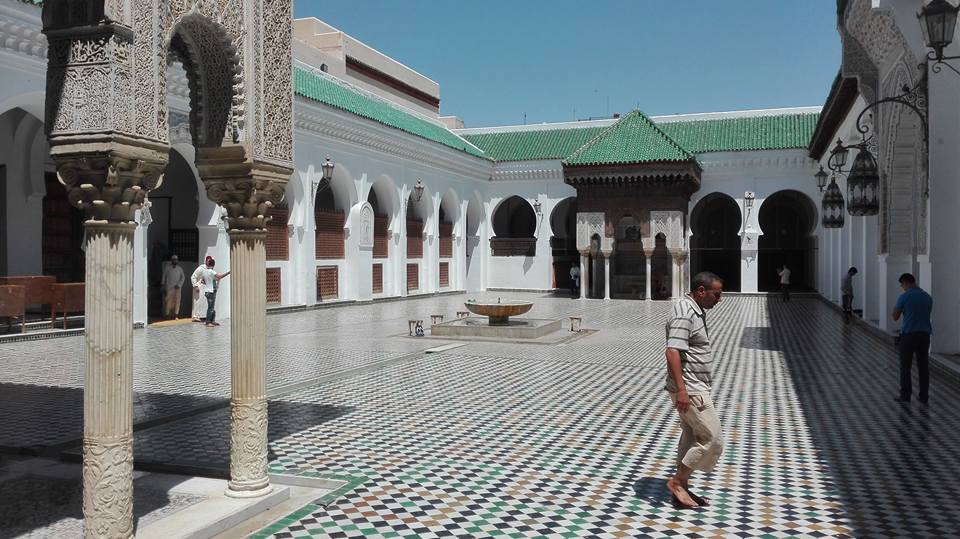 Fez is a city that is more traditional and has an ancient look compared to the touristy places around. You can expect to visit places here that have been around since ages. This mosque is not a mosque per se, but a university. The Al Quaraouiyine Mosque is one of the most ancient universities that are functioning even today.

The Al Quaraouiyine Mosque is adjacent to the Al Attarine Madrasa which is similar to this in several areas. You can just visit both of them at once as well. Both the Mosque and Madrasa offer you a deeper insight into the traditions and architecture of the old Fez.

This university was established way back in 859 AD and has been an integral part of Fez, Morocco ever since. As of today, it functions as a mosque and has a rich library as part of its heritage university status too. The tilework and architecture although renovated still is same as its originals. Additionally, the library, renovated in 2016, is open to the public as well. Although the mosque doesn’t allow entry to non-muslims, you can still get access to the library. 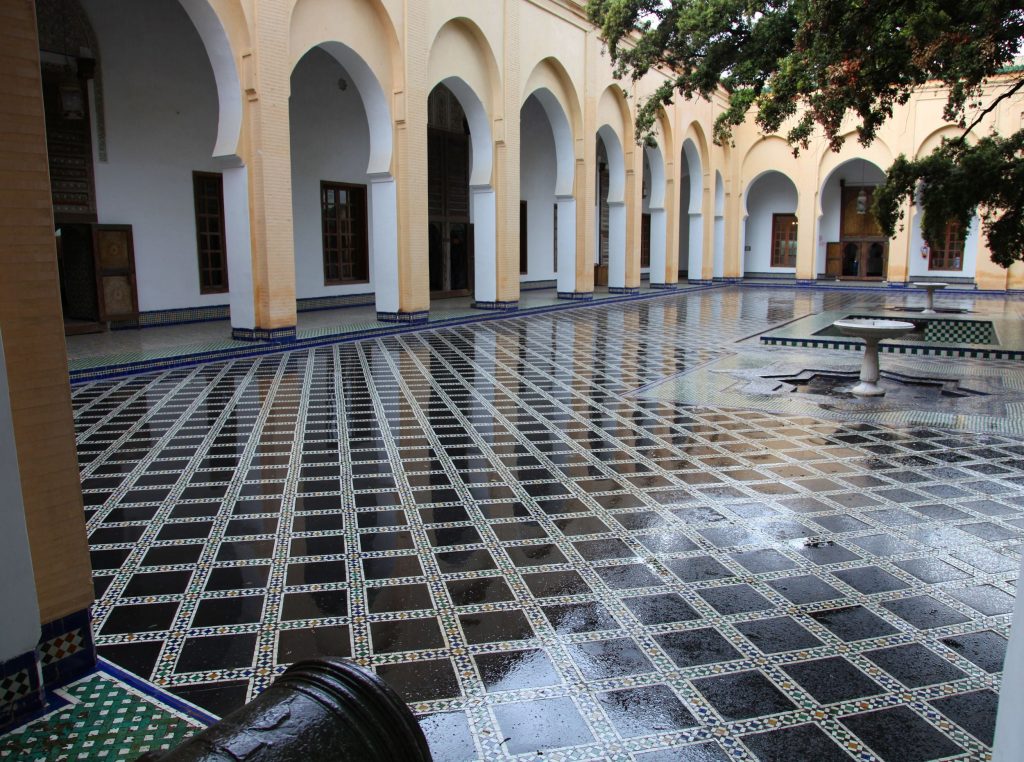 Dar Batha sways away from the medieval look of Fez. It is primarily a renovated castle which serves the function of a museum today. The best thing about coming to Dar Batha is getting to see and relax in its lush green gardens.

There are decorative elements, as well as 14th century memoirs to look at inside. Additionally, even the tiles and woodwork is reminiscent of the 14th century. The Moroccan tiles, carpets, and outer elements such as fountains are elements which make the Dar Batha a must visit. 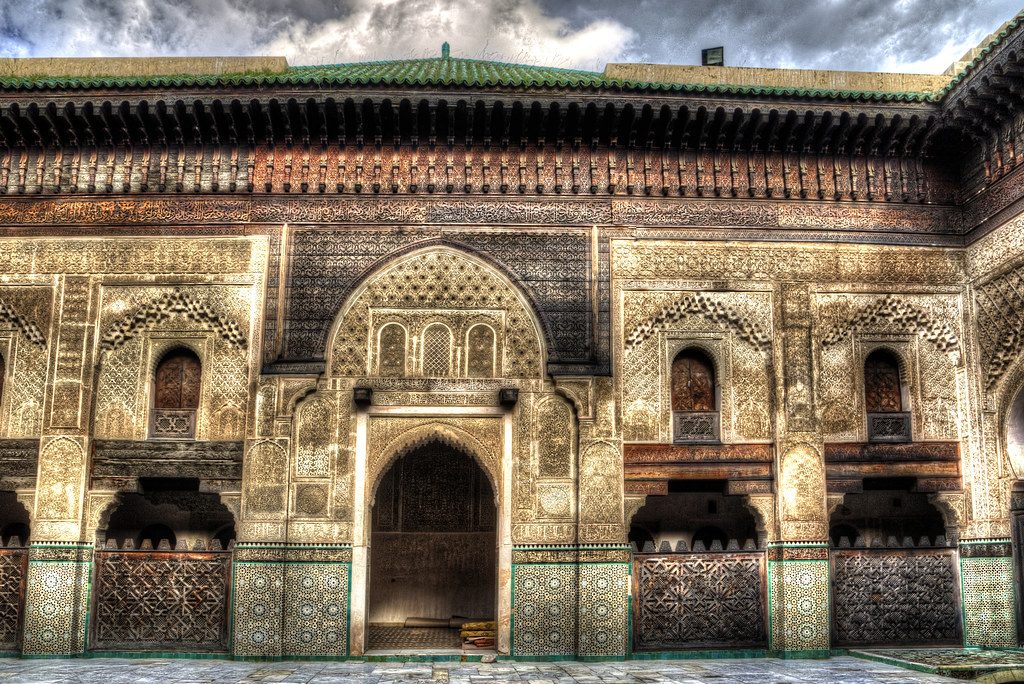 Much like the other buildings of this ancient city, Fez also has an another university. It would be better to say it is an ex-university since it is no longer functioning. You can find this 14th century university near the entrance of Old Medina.

As it is a restored building, you get to witness its remains of the old Moroccan elements. Sultan Bou Inan built this back in the 14th century. Since then, it acts as a monument of ancient remains of the university. The rooms where used to hold classes and several other old elements are open for the public to see.

Additionally, you also get to see the stunningly beautiful interiors. The huge doors are as magnificent as it gets and the various elements add to the charm of this place. The internal mosaic art, courtyard and the fountains, as well as hand constructed walls are elements that contribute to the beauty of this monument. 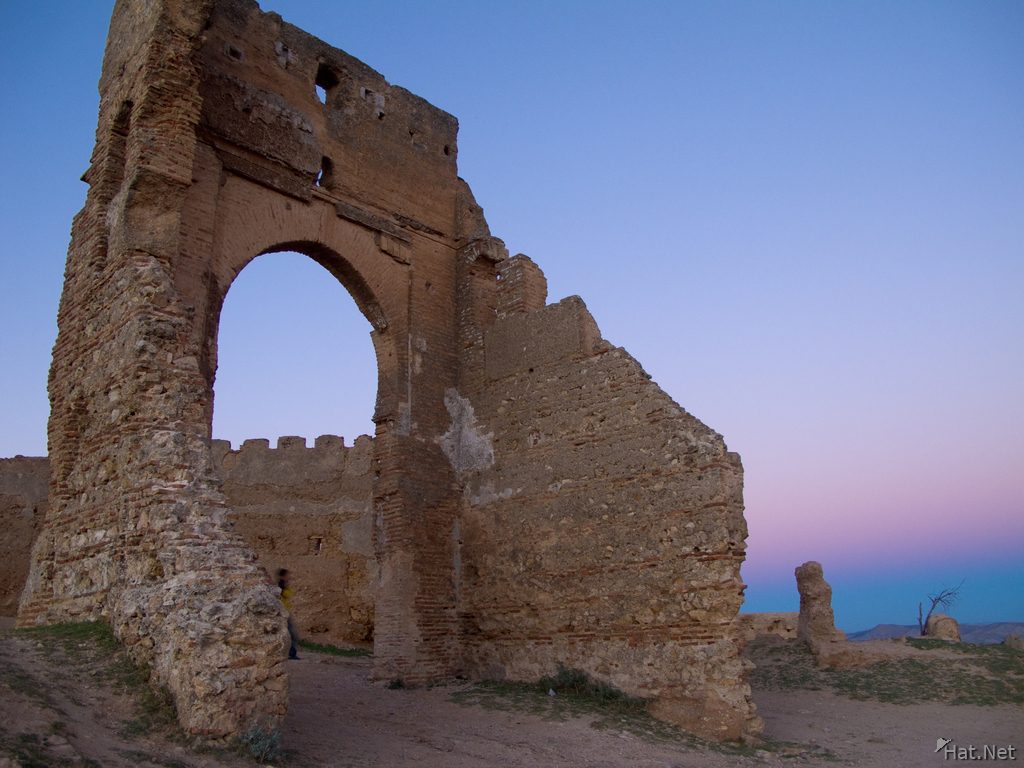 Additionally, the architecture of the tombs and pillars still are in great shape. However, the paintings and other murals have faded away over the years and you can’t see it clearly. These tombs are located on a hilltop which offers great view of the Medina city. It is a good idea to get downhill before sunset and the visit uphill is worth visiting these amazing structures. 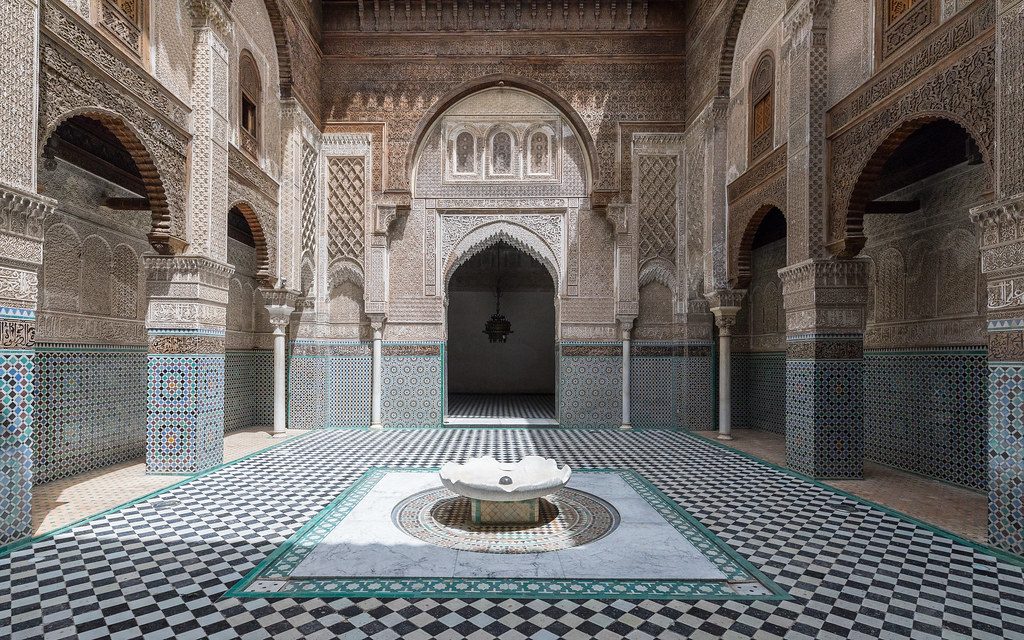 Madrasa is the Arabic word for any educational institution. Visiting the Al Attarine Madrasa offers you a once in a lifetime trip to witness this amazing monument. Additionally, you also get to hang out at the surrounding markets which offers you an opportunity to shop for exotic and local items. The market also known as Al-Attarine Souk offers travelers the option to buy the local fruits, spices, and Arabic exotic handicrafts. 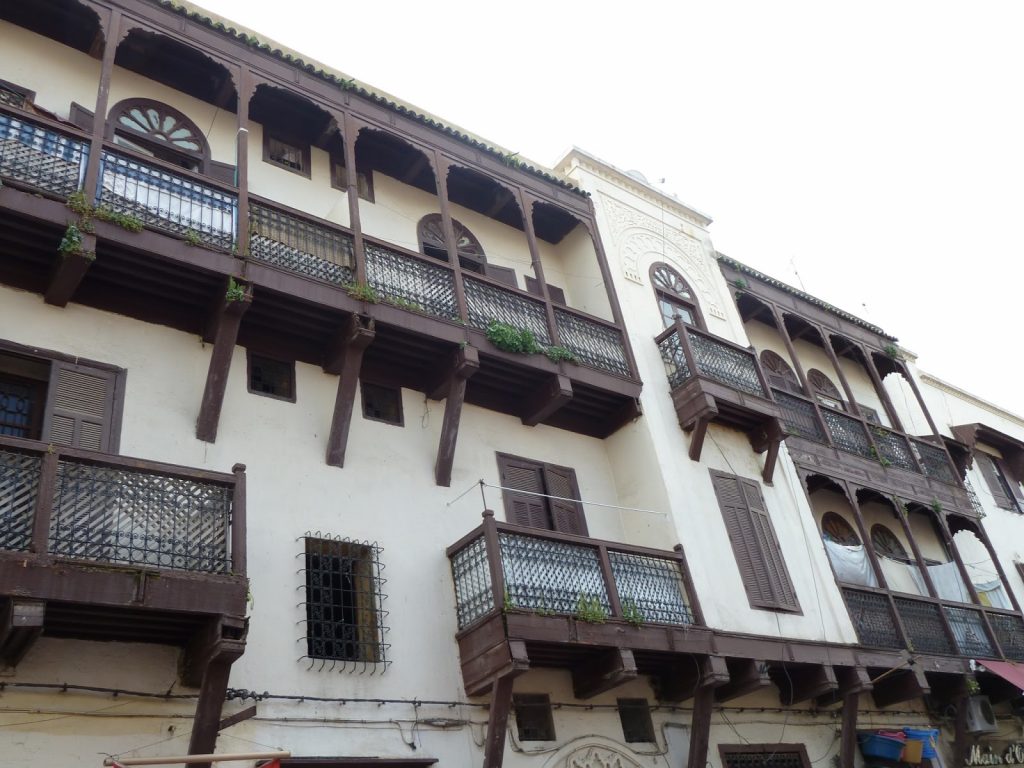 The Mellah in Fez, Morocco is quite an interesting place to add to your travel list. This is primarily because of the historic significance of this monument and what is served as. The word “Mellah” means “salt marsh” and it was the first area of Jewish settlement in Fez. There are several Mellahs all across the country of Morocco and the one in Fez, Morocco is just one of the many.

Mellahs acted as refuge for the Jews during both the 15th century as well as in the beginning of the 19th century. The Mellahs protects the Jewish communities. An additional wall further fortified these communities and the Mellah. This Mellah located in Fez is the first ever Mellah established way back in the year 1438.

A Mellah was located primarily in places which were of importance because of trade or commerce practices. Additionally, not just as a safe space for the Jewish communities, because of the important location, it is also an important structure in the city. 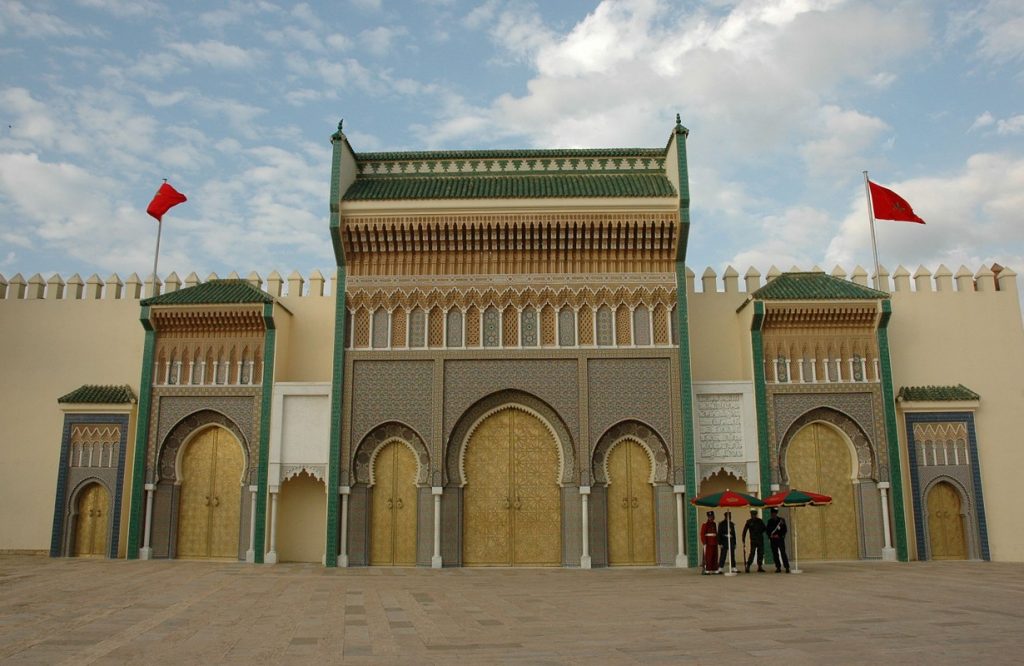 The Dar el Makhzen is an important part of Fez, Morocco. As the only functioning castle of the city, it is is quite a sight to behold. The royal family doesn’t actually reside in the city in today’s age but it serves as one of their castles nonetheless. Although you might just get to see it from the outside, it is a must visit on your trip to the city of Fez.

The palace is not open to the general public and you might be lucky if you get to see the interiors at all. But the exteriors reflect the royal and magnificent look of this palace. The ginormous bronze and gold doors are worthy of the royal look that this place exudes. Overall, the colours, tiles and huge walls and doors make this place a must visit on your trip to Fez, Morocco. Dar el Makhzen is a touristy spot and you may get a lot of rush around as well.

Moreover, not visiting this palace will make your visit to Fez, Morocco incomplete. 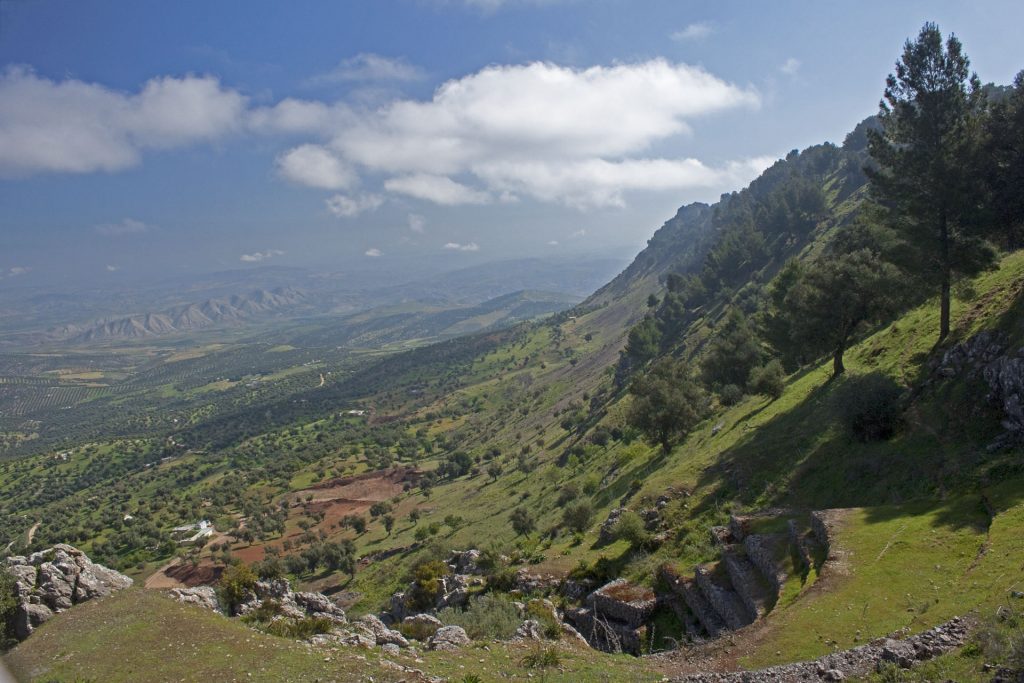 If you are tired of exploring the monuments around and inside the city of Fez, you can head over to Mount Zalagh. From the top, you can see the entire city of Fez, Morocco and the surrounding areas which is quite the view.

This is quite a relief from the hustle and bustle of the city. You will also get to have some personal time in peace. Additionally, it is also a nature trek that lets you see the amazing olive trees and amazing views. The natural elements in addition to the stunning views of the Medina city are quite an experience. On the way up, you can also stop at the Borj Nord Arms Museum which is quite an interesting place to get historical info about Fez. 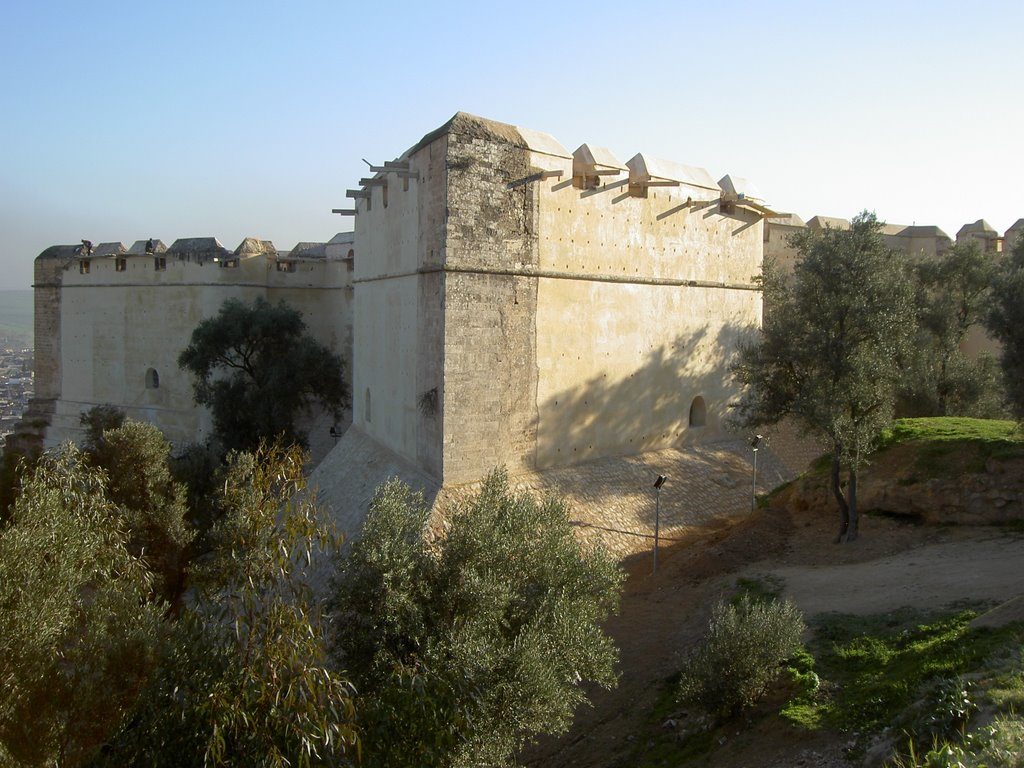 The name is quite misleading to what the original purpose of this monument was. The Borj Nords Arms Museum is an impressive fortress which overlooks the entirety of the city of Medina. Then Sultan Ahmad al-Mansur built this museum in the 16th century to overlook the city and to keep the disloyal masses in check. It is not as high as Mount Zalagh mentioned above. One can just stop here and look around the fortress to see the views of the Medina city.

2016 saw it introducing a museum to open for public and display the arms in use from back in 16th century.  The museum is a must visit for anyone looking to get a deeper look in the dynasties and rule over Medina and Fez in the 16th century. The museum is home to amazing jeweled Arabic daggers and other weapons of war. Additionally, you can also get interesting info about the wars, history, and arms development in the area.

Visiting the city of Fez, Morocco is not your usual travel spot of getting amazing sights everywhere the eye turns. But, the historical significance and overall vibe of the area makes it a haven for people who love history and want to know more about the medieval rule here. Moreover, the city basically comprises of sand coloured buildings and ancient monuments and forts and is a great place to go back in time to see how people have been living here.

Another thing about the city of Fez, Morocco is the historical significance it had to the Arab dynasty. It is the largest city in Morocco, second only to Casablanca. It is important to honour and respect the locals and their way of living and culture. There are plenty of places to explore both inside and outside the city. The weather is also on the hotter side and you might have to protect yourself from the heat.

Overall, it is quite an interesting place to visit and immerse yourself in the local culture. It is a great visit in terms of historical places as well as local arts and trade practices. There are plenty of places around which offer views of the city and museums to show you the educational and ruling history of Fez. 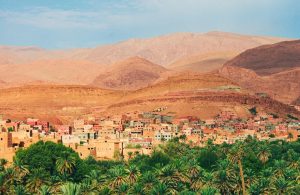 15 Best Things to Do in Morocco, the Gateway to Africa
Travel Guide 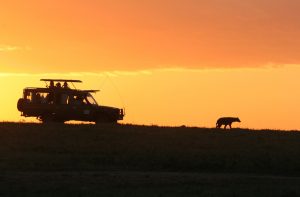 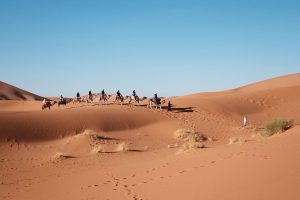 Epic Guide To Visit A South Africa Safari On A Budget