Dublin is the capital city of Ireland and stereotypically known for Guinness, leprechauns and four-leaf clovers. Besides having lots of drinking taverns, Dublin is one of the most beautiful cities in Ireland, teeming with rich culture and history.

Gaze at the majesty of Christ Church Cathedral and guzzle down pints in Temple Bar. Listen to the Irish folk music and tales of the locals and stumble down the beautiful cobbled streets.

If the luck of the Irish is on your side and you find yourself wandering this beautiful city, read below for a hand-picked curated list of 15 must-see landmarks and things to do in Dublin, Ireland. 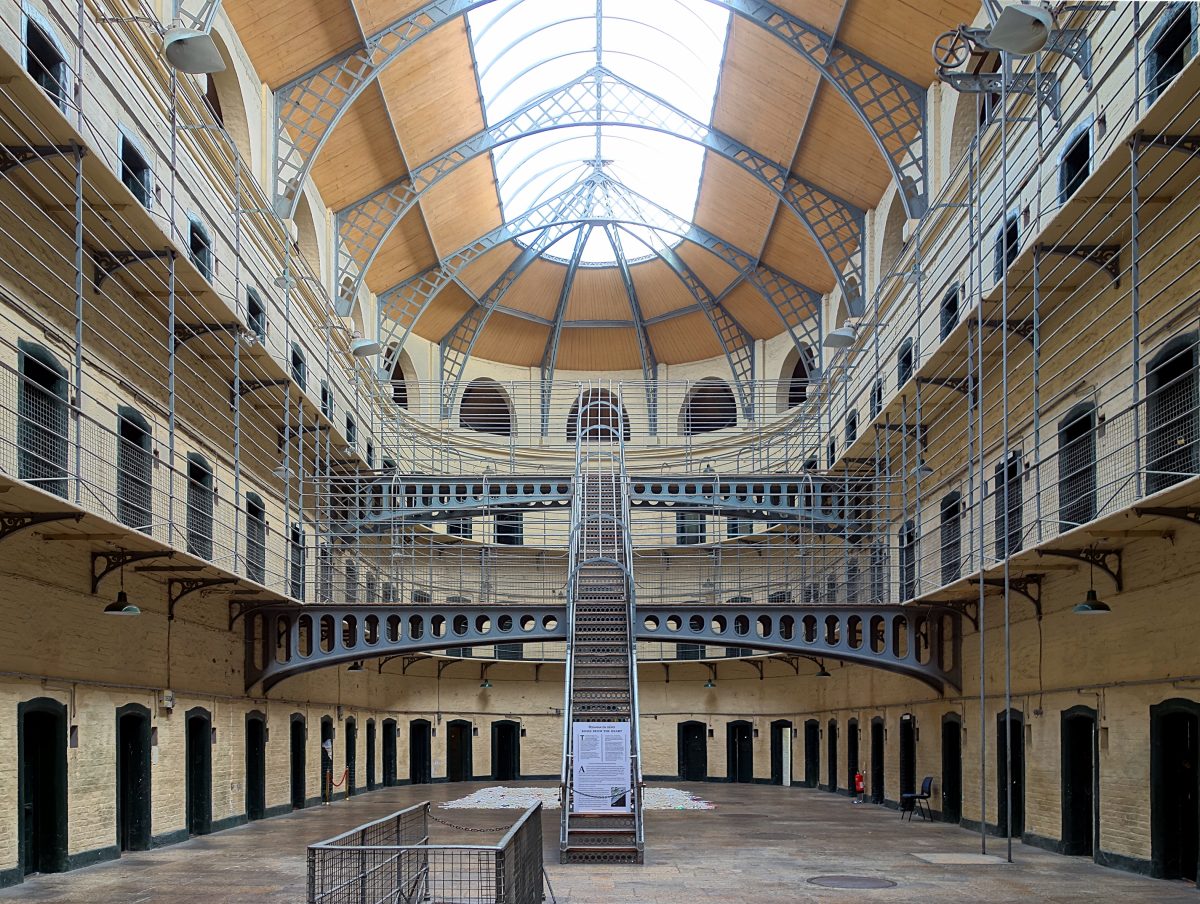 A former prison, Kilmainhaim Gaol is now an open museum in Dublin that displays the harrowing history of the country. The building is representative of the militant and constitutional Irish nationalism that is written in the history books.

During the Anglo-Irish war, several Irish revolutionaries of the Irish Republican Movement were imprisoned here and then later executed by the British. As a county jail, ordinary men, women and children were also detained here with sentences for crimes ranging from petty to serious offences. The prison closed in 1924 and the museum opened in 1971.

As an absolute must-see in Dublin for history aficionados, tourists can embark on a 45-60 minute tour with a knowledgeable guide who will inform you about the terrible treatment of inmates, the history and politics during the operation of the prison and subsequent closure and restoration of the current museum.

The Dublin museum is open between 9am and 7pm, and tickets range between €4-6. 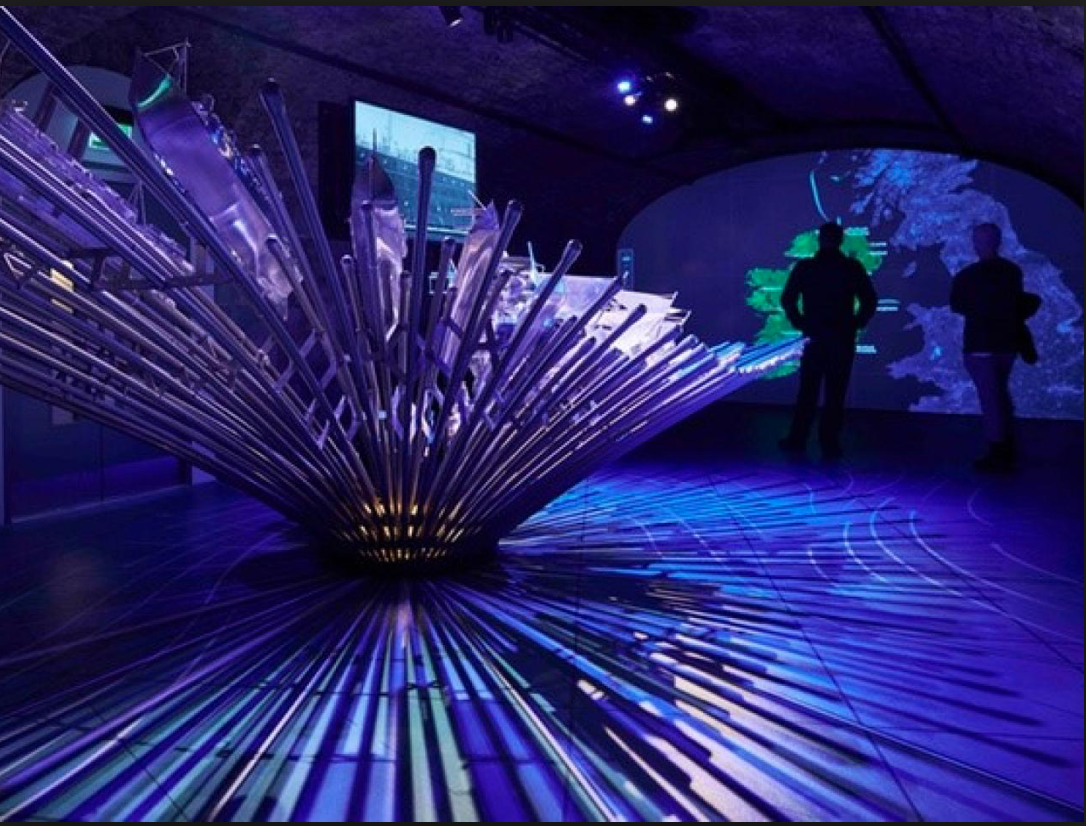 It’s funny how the full name for this engaging and interactive museum is the EPIC Irish Emigration Museum. Although museum curator, Jessica Traynor, states that the incorporation of EPIC into the name of the museum stands for acknowledging the truly epic journeys that Irish emigrants made, we believe that the museum itself is the true embodiment of ‘epic’.

Voted as ‘Europe’s Leading Tourist Attraction’ at the 2019 World Travel Awards, the Dublin museum tells the stories of the vast Irish diaspora and their individual tales of emigration to countries around the world. Composed of twenty different exhibits, visitors can learn about the migration patterns, reasons and stories of Irish emigration throughout the eras ranging from religious missionary work to religious and social persecution. The stories of notable Irish immigrants from across different industries and sectors are also told within the Influence exhibition, where visitors can learn how Irish culture and individuals have influenced global society.

People with Irish descent can also visit The Irish Family History Centre where you can consult with in-house genealogists, access digitised records and track your family history! 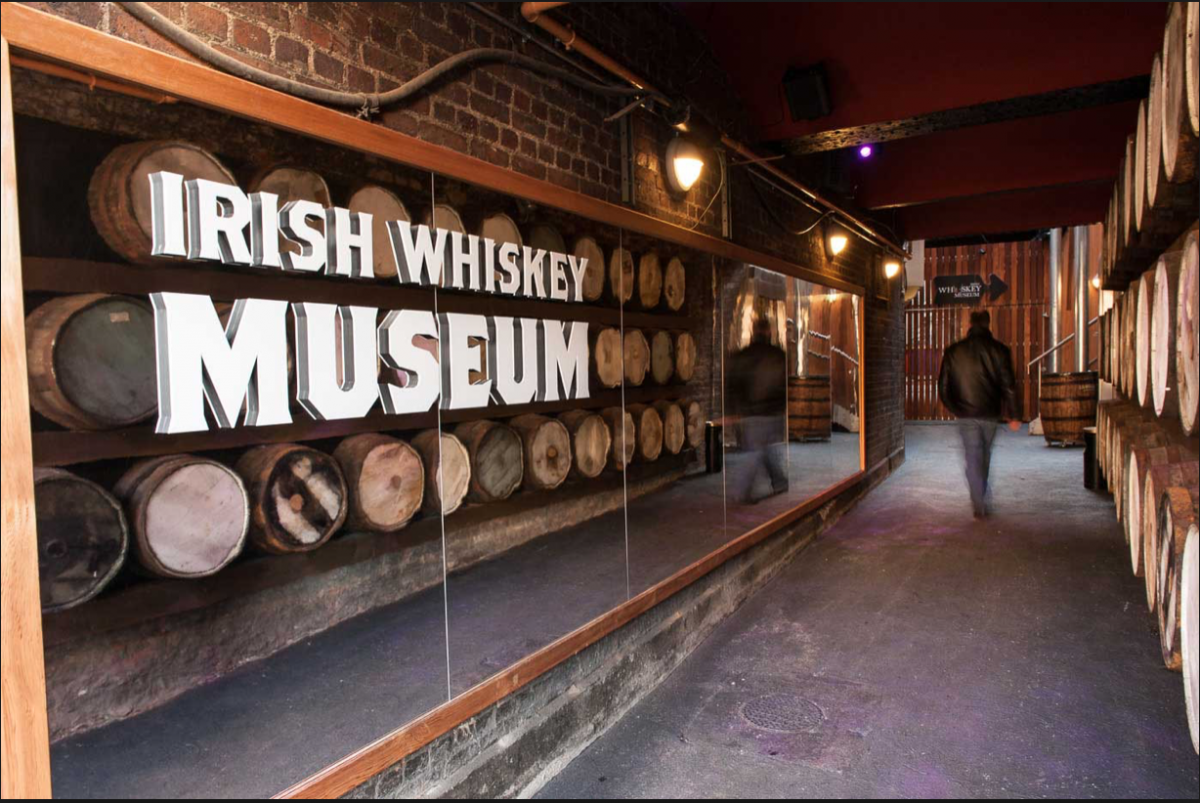 The knowledgeable guides will introduce you to the up and comers in Irish whiskey and will give you a tipple to taste as well. At the end of the tour, you will truly be an Irish whiskey connoisseur! 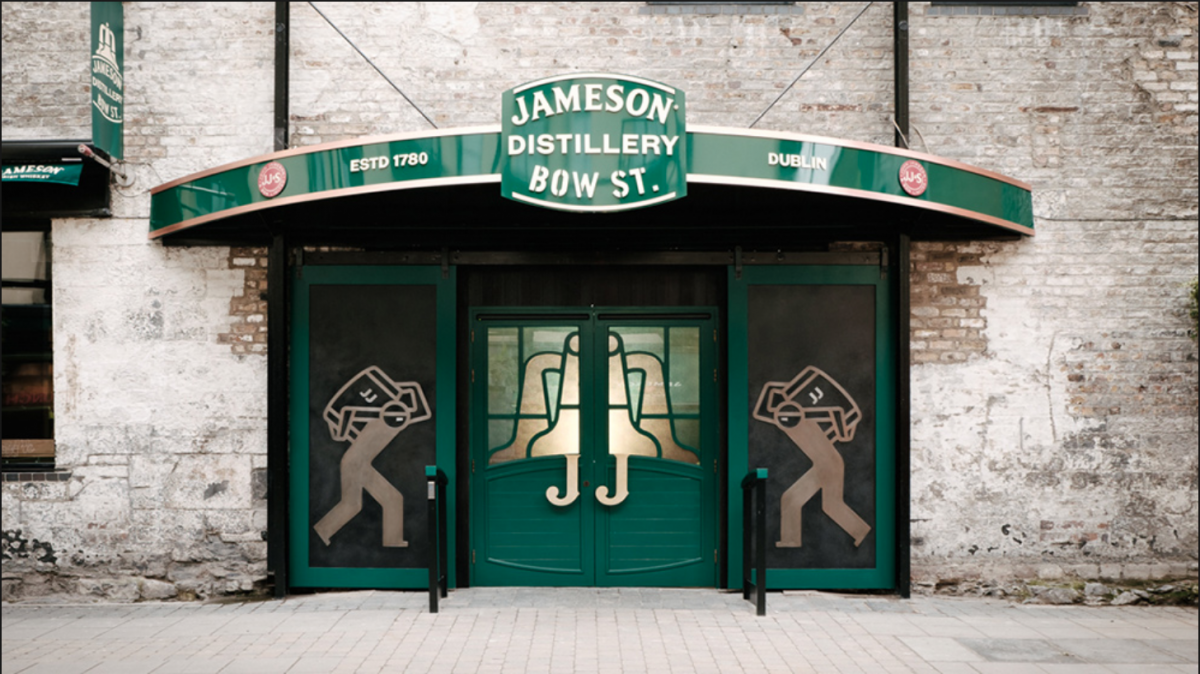 A glass of Jameson and Coke is probably a drink order that every Dublin bartender has heard in their career. Visit the home of the famous Jameson Irish Whiskey by going to the Jameson Distillery Bow Street in Dublin. The now-defunct distillery was the original site where the alcohol was distilled until 1971.

Visitors can embark on a fully-guided tasting tour and learn about the heritage and processes of Ireland’s best-selling whiskey. Tour experiences will come to a nice end in the JJ Bar where you can have a complimentary tipple and chill with friends. If a guided tour does not sound up your ‘Bow Street’, visitors can also choose to try out a whiskey blending masterclass, whiskey cocktail masterclass or a 40 minute in-depth tasting session of Bow Street’s favourite whiskeys.

Opening hours are between 10am and 5:30 pm (with the exception of Friday and Saturday, where doors close at 7pm). Tour ticket prices start from €17.

The Little Museum of Dublin 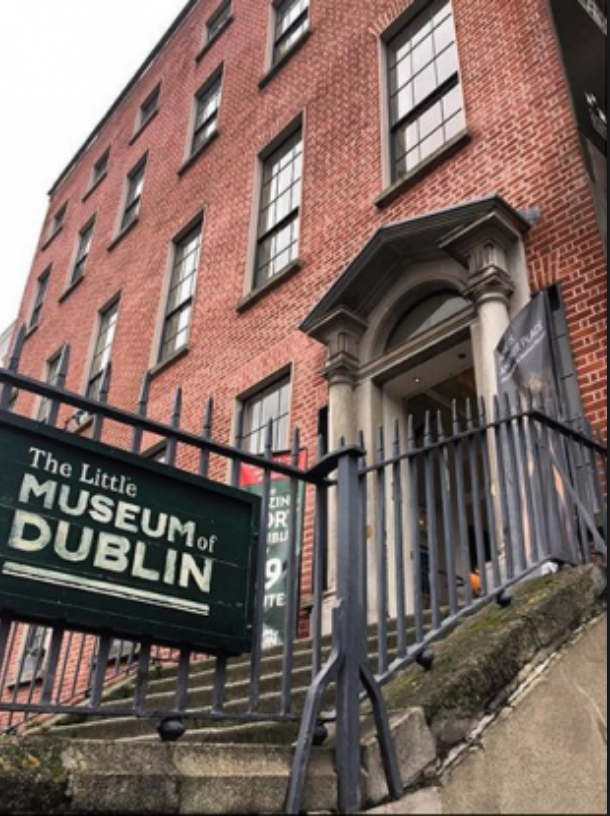 You are lucky to find yourself gazing at magnificent Irish architecture and venturing down the cobbled Irish streets in the beautiful city of Dublin. Hence, why not learn about the history of The Dubs itself by popping into The Little Museum of Dublin?

A civic people’s museum, The Little Museum of Dublin chronicles the history of Dublin during the 20th century. The Dublin museum offers visitors personal and detailed glimpses into the everyday life of Dubliners during the 20th century, including exhibitions on the 1916 Easter Rising, J.F.K’s historic visit and other events in Irish political and social history. Described as the ‘best museum experience in Dublin’, The Little Museum of Dublin may be little, but its influence is anything but. 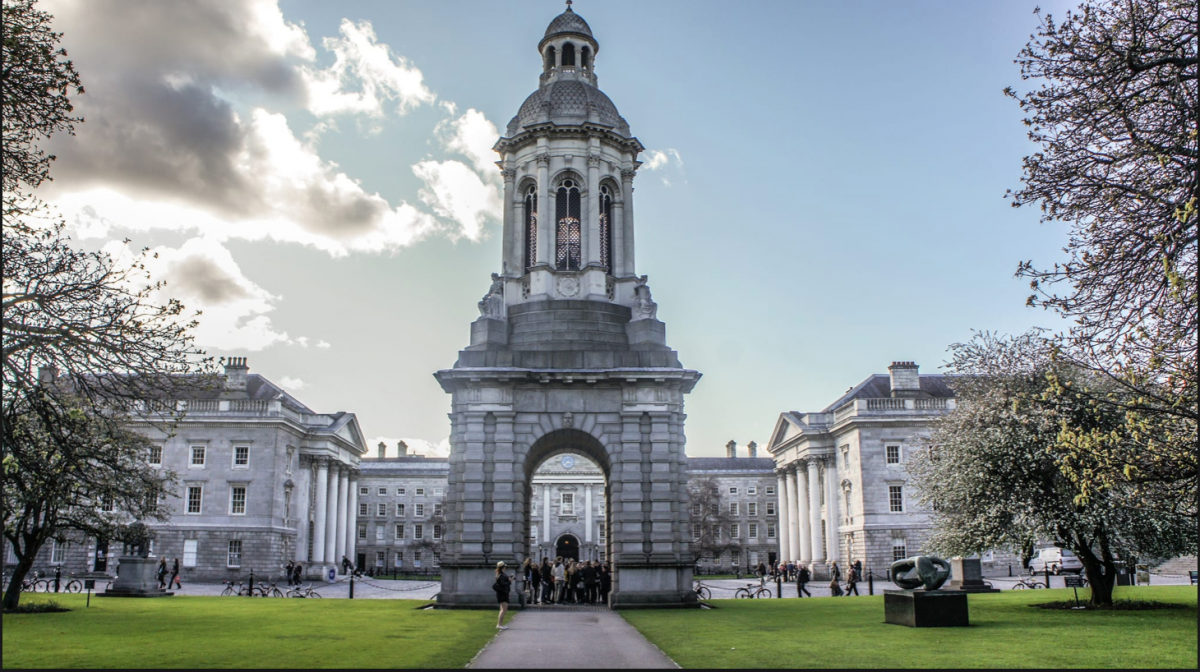 Visitors can embark on a guided tour around the campus and learn about the rich 400-year history of the Dublin university. Tours are open all year and visitors can simply turn up and purchase a ticket at the door. Tours start at 09:30 and end at 15:30. Ticket prices range between €7 and €15. 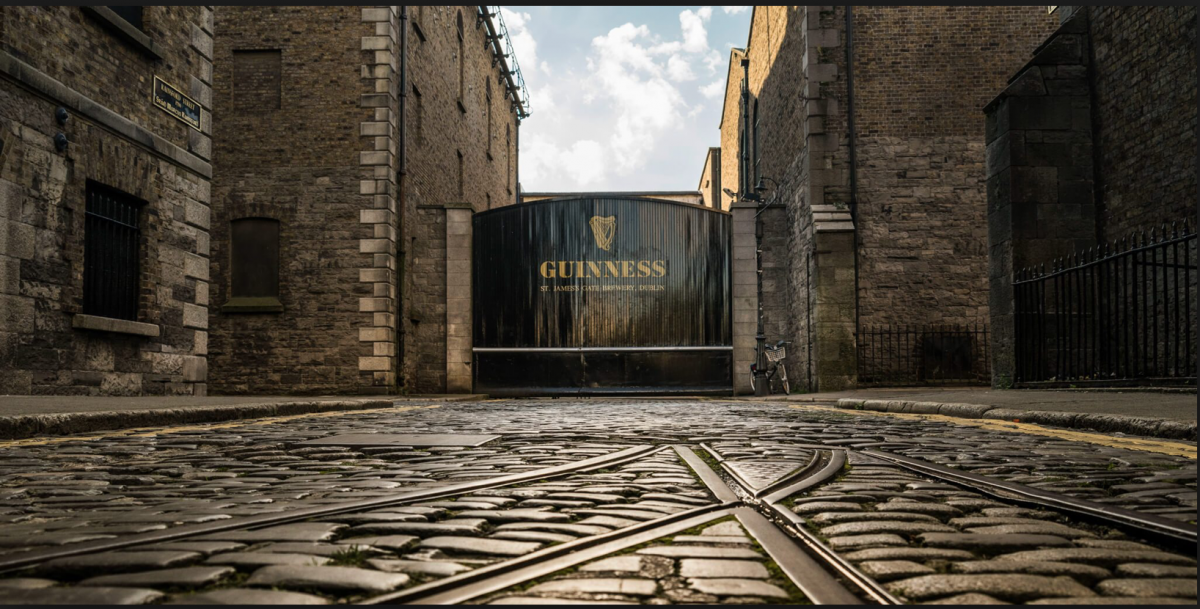 “A pint of Guinness, please!”. You might have warbled this in an incredibly bad impression of an Irish accent, a few drunken nights ago. However, you can now visit the birthplace of the world-famous beer at the Guinness Storehouse in Dublin.

Visitors can stumble throughout the museum and learn about the history and origins of the celebrated beer. The Guinness story is split into several interactive exhibition areas including ingredients, brewery, transport, cooperage, advertising and sponsorship. At the end of the guided tour, visitors can pour their own pint of Guinness and even print their selfie on top! Happy hour is finally here! 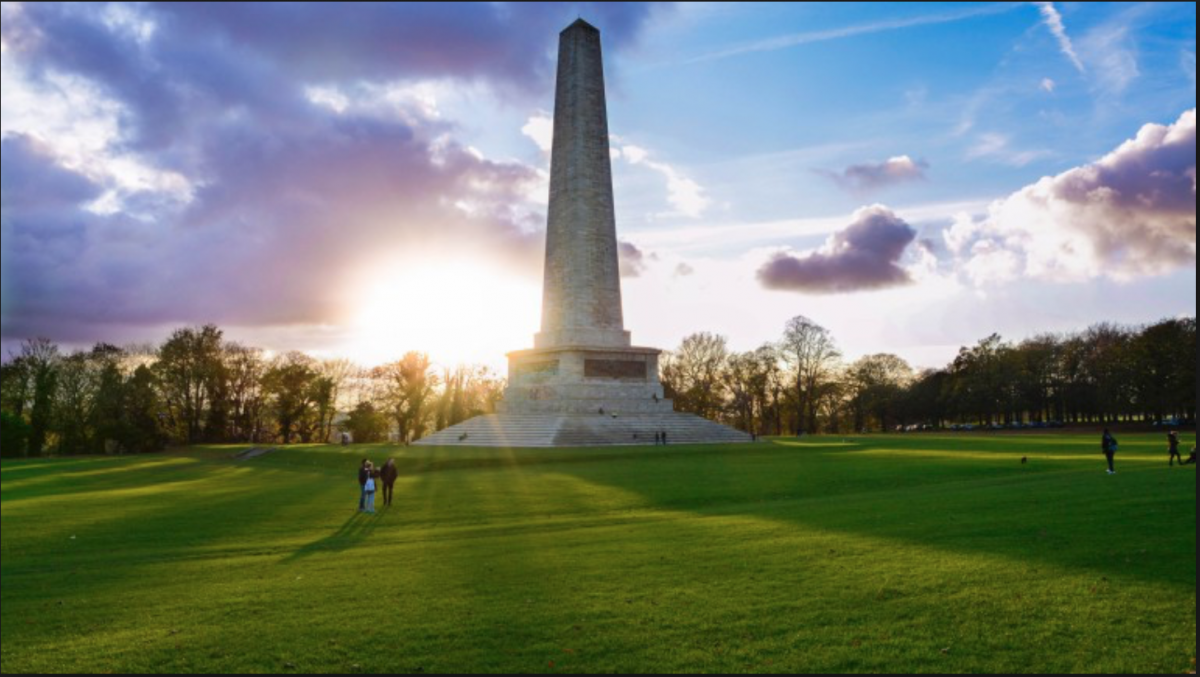 © Photo by The Culture Trip

Drop everything and pack a picnic to soak up the fleeting sun at Dublin’s Phoenix Park. As the largest urban park in Europe, spanning 1752 acres, Phoenix Park is a magnificent enclosed green space, perfect for relaxing, sightseeing and playing outdoor games with friends and family.

The Dublin park is notable for being home to a herd of wild fallow deer, the Dublin Zoo, the Wellington Monument and both the Presidential and US Ambassador residences. In addition, the Irish government is currently lobbying UNESCO to declare Phoenix park as a World Heritage Site. So find a space and ‘park’ yourself on there to sit upon history in the making! Dublin’s Phoenix Park is open all year round. 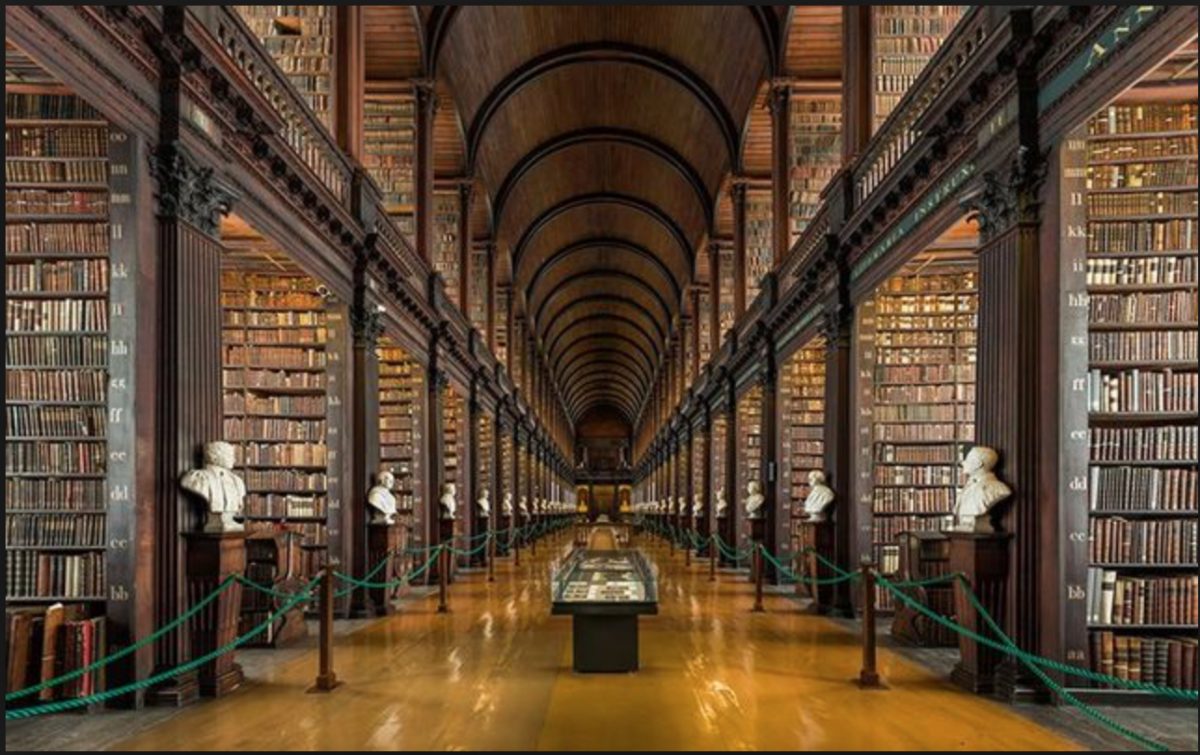 A 9th-century Latin manuscript that documents the four Gospels of the New Testament, The Book of Kells is regarded as ‘Ireland’s greatest cultural treasure’ and the ‘world’s most famous medieval manuscript’. History and literary buffs can embark on a guided tour throughout The Long Room. Visit The Book of Kells exhibit and learn about the book’s history and preservation.

As Ireland’s most prized artefact, visiting The Book of Kells exhibit is an item on your  Dublin itinerary that you should not miss! Opening hours are between 8:30 am and 5pm and ticket prices range between €11 and €14. 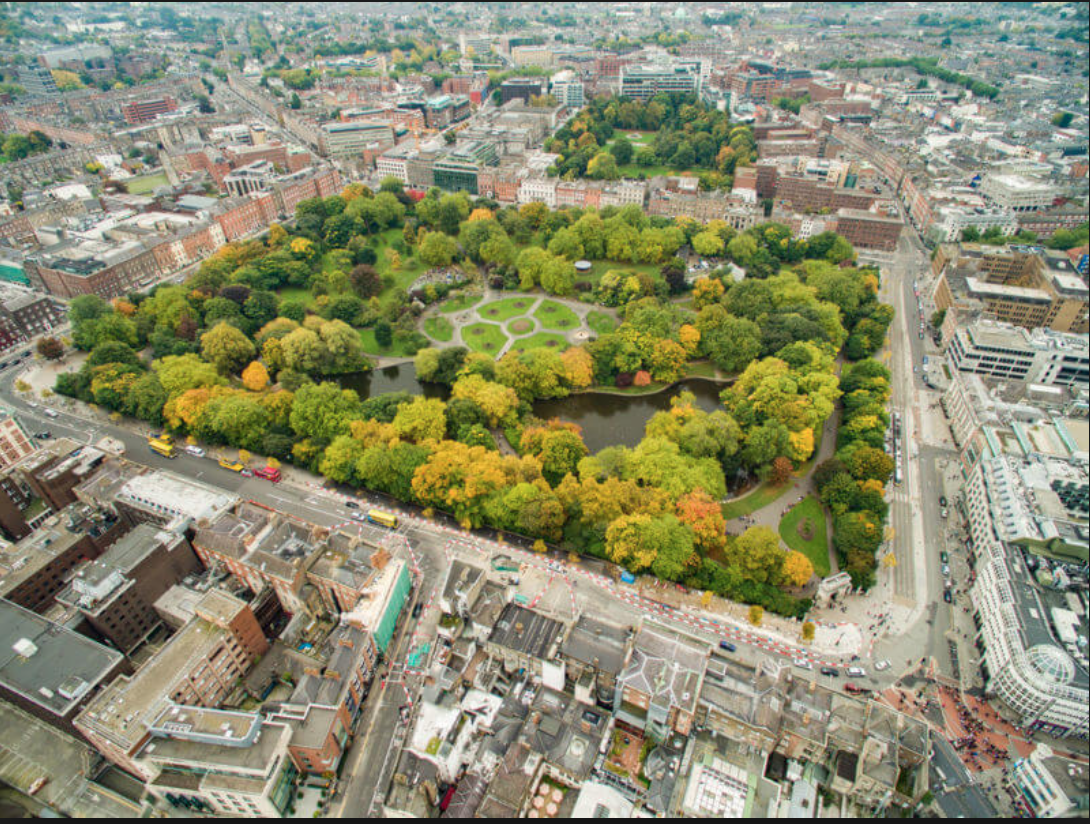 © Photo by The Irish Road Trip

Get away from the hustle and bustle of the city and take in the natural beauty of St Stephen’s Green. Nature lovers will love ambling through the lush greenery and taking a respite from the hubbub of Dublin.

A historical Victorian Park, St Stephen’s Green is notable for being maintained in its original Victorian layout with carefully maintained and preserved flowerbeds, shrubberies and tree lined walks. If you are an avid shopper, the park is adjacent to one of Dublin’s main shopping streets, Grafton Street and is also near a shopping centre of the same name.

The park opens all year round and operates during daylight hours. 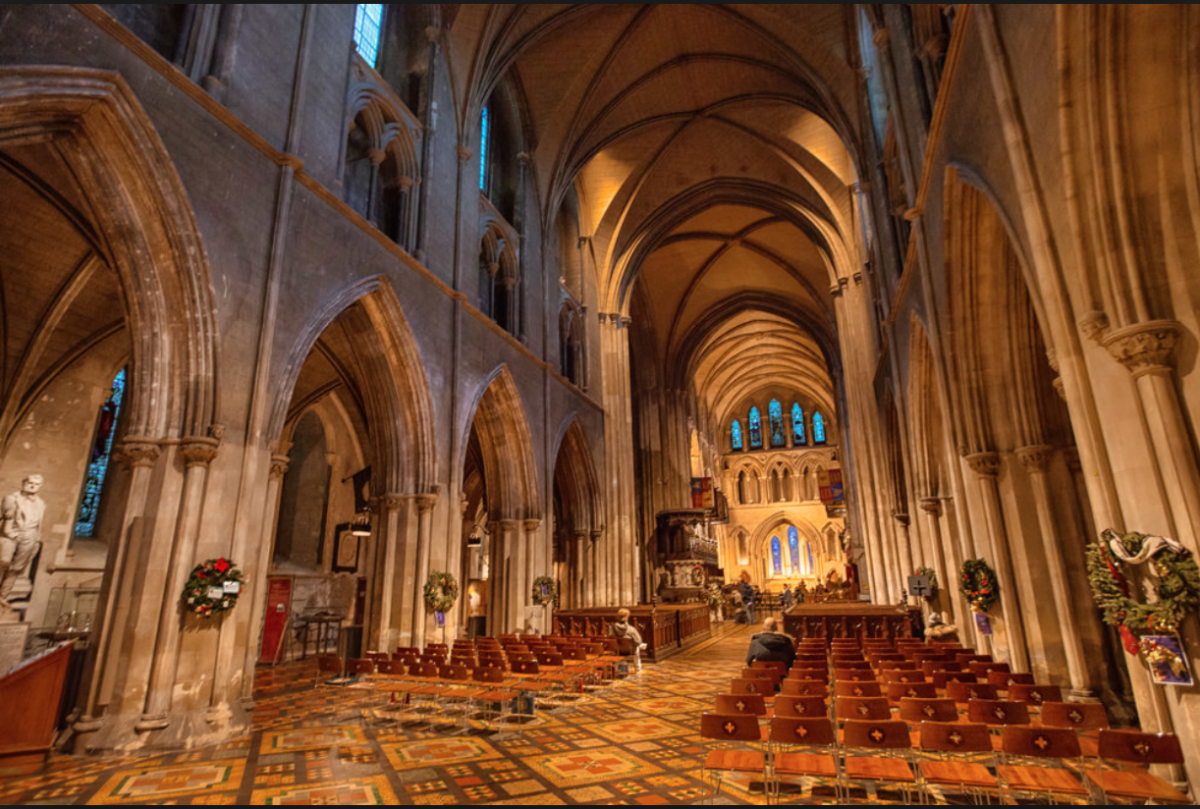 Visitors can take in the rich history, culture and tradition that this cathedral breathes and find themselves at spiritual peace when exploring this gorgeous place of worship.

Opening hours are between 9:30am and 5pm and ticket prices start from €7. 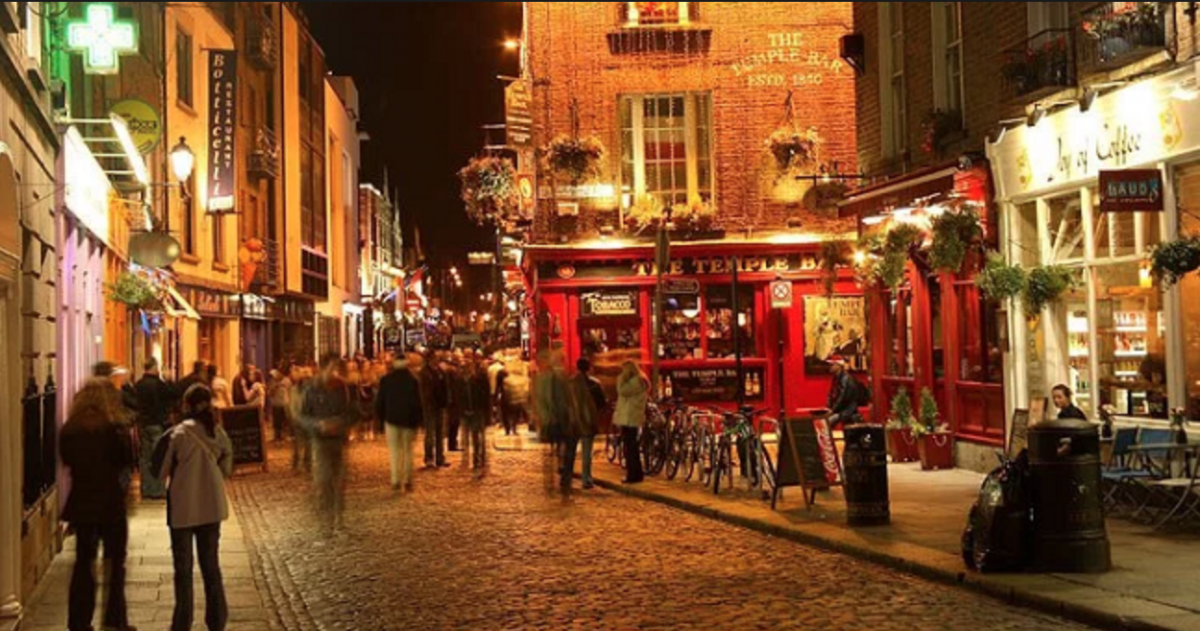 Visit Dublin’s trendy cultural quarter and explore the vibrant nightlife the city has to offer. Located in the beating heart of Dublin, the cobbled street square is packed full of boutiques, cafes, galleries, bars, restaurants and pubs.

Any time of the year, the area is bustling full of young and beautiful party-seekers and merrymakers. Next time you find yourself in Dublin, visit the famous red bar, The Dubs, meet locals and tourists alike and have a pleasant evening! 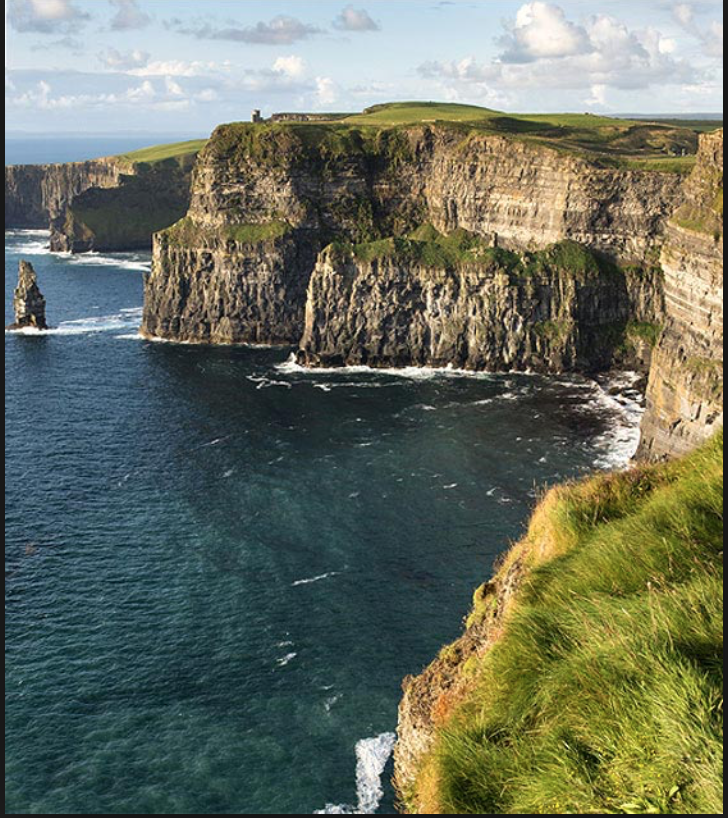 © Photo by Cliffs of Moher

Get away from the commotion of the city and discover the true natural beauty that Dublin has to offer.  Located on Grafton Street, Gray Line Ireland offers fully-guided day tours to visit The Cliffs of Moher in County Clare. A certified UNESCO Global geopark, The Cliffs of Moher offers gorgeous panoramic views over The Atlantic Ocean.

Take in the staggering beauty of the cliffside views, feel the ocean spray and listen to the ageless legends immersed within the rocks of this historical location. Venture down The Doolin Cliff Walk and pop by the aesthetically eclectic Visitor Centre.

To check in, enter the Dublin Visitor Centre located on Grafton Street at 9.40 to depart punctually from Dublin at 10am. The approximate ETA to arrive at the Cliffs of Moher is around 13:50, travel and weather permitting. The approximate time of return to Dublin is around 20:30. Ticket prices are approximately €48. 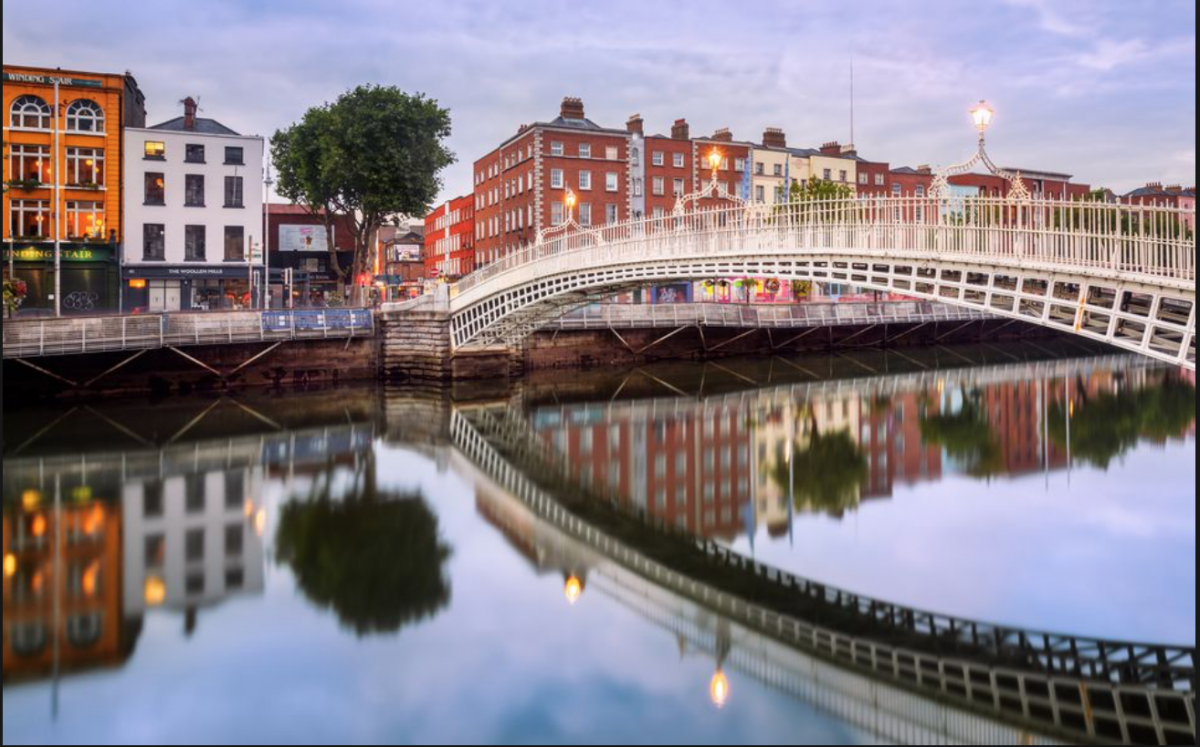 A common feature on postcards, brochures, and tourist memorabilia, the Ha’Penny Bridge is an easily recognisable structure that defines Dublin. The notable white cast-iron bridge transverses over the River Liffey and is one of the most popular bridges in Dublin.

The name “Ha’Penny” comes from the fact that individuals back in the day had to pay half a penny to cross the bridge. Due to the popularity of the bridge nowadays, it is a relief that people no longer have to pay for the convenience! During your visit to Dublin, make sure you walk over the bridge and take in the beautifully peaceful river and skyline views that the city has to offer. 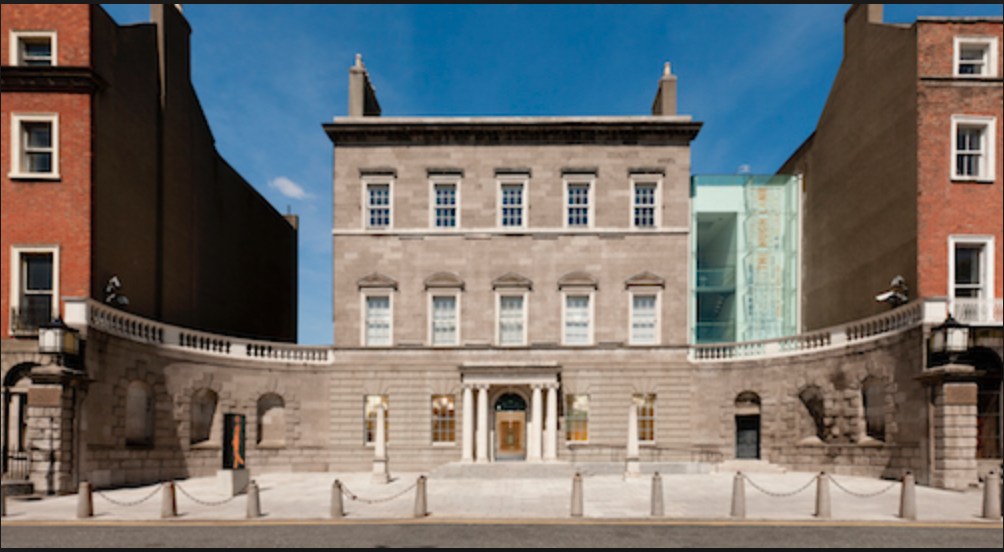 Founded in 1908, the gallery possesses a permanent collection and regularly hosts multiple exhibitions, mainly by contemporary Irish artists. The Dublin gallery is also notable for exhibiting French artwork as well, including works by Pissarro, Renoir and Manet.

Opening hours are between 9:30 am and 5pm. The museum is wheelchair accessible and is free admission.

Which tourist attraction in Dublin interests you the most? Let us know in the comments section below!