Visiting this small but culturally enormous country will take your breath away so many times, that will make it seem like your trip here was much shorter than it was. Its rich history, incredible fortresses, museums, and nature will make you come back, and this is just the beginning of everything that this country can offer.

In Luxembourg, you can see and learn while exploring some of the most recognized museums, relax and enjoy the picturesque views or have fun on the hiking paths. There is also a famous casino for those who like to take their chance and enjoy that kind of entertainment. Here are some of the best things you can do while visiting Luxembourg. 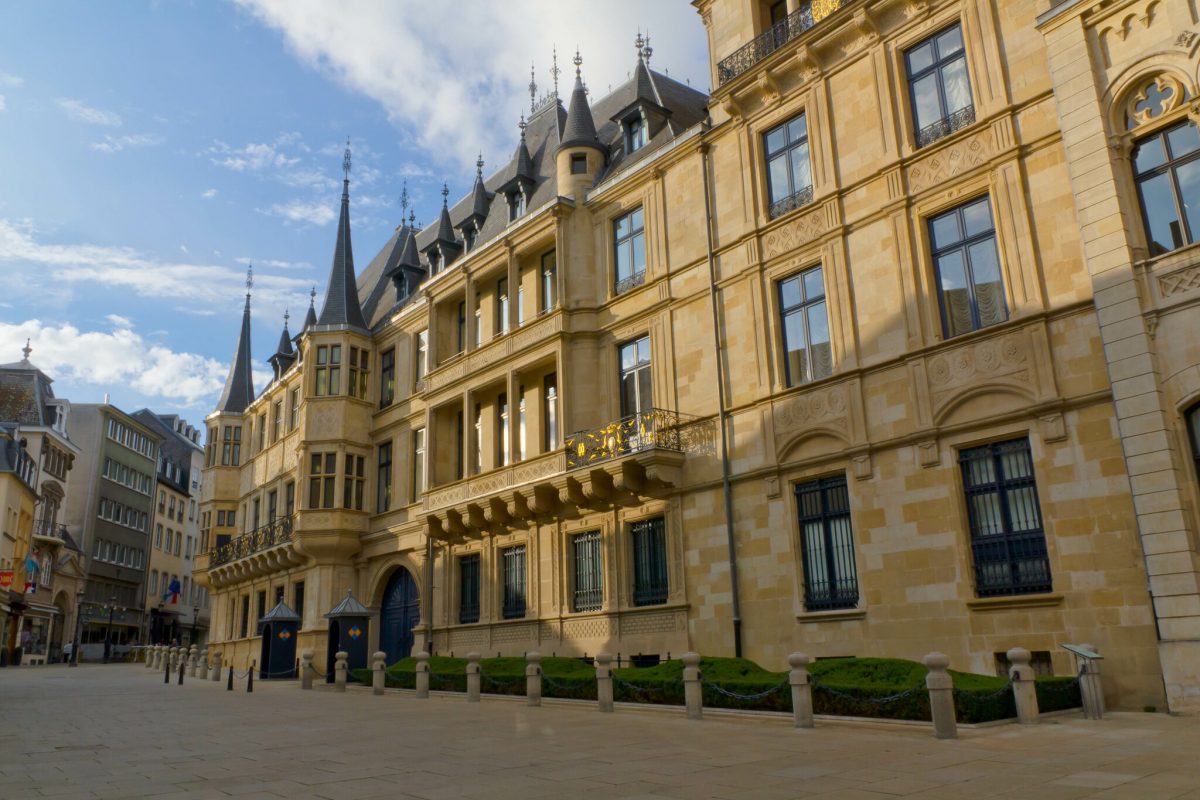 While planning your trip to Luxembourg, one place that will often come up as must-see is the Grand Ducal Palace. This fabulous monument was first designed and built as a town hall in 1572. Since then it was expanded many times and it is an official residence of the Grand Dukes’ since 1890. Located in the middle of the Old Town, it graciously designed façade stands high and attracts the attention of everyone. 50-minute guided tours are available and you will enjoy every minute of it.

Grand Ducal Palace is open to visitors during the summer months from 13 July until 5 September. Admission for adults is 14 €, 7€ for children ages 4 to 12 and admission is free for children under 4 years.

National Museum of History and Art 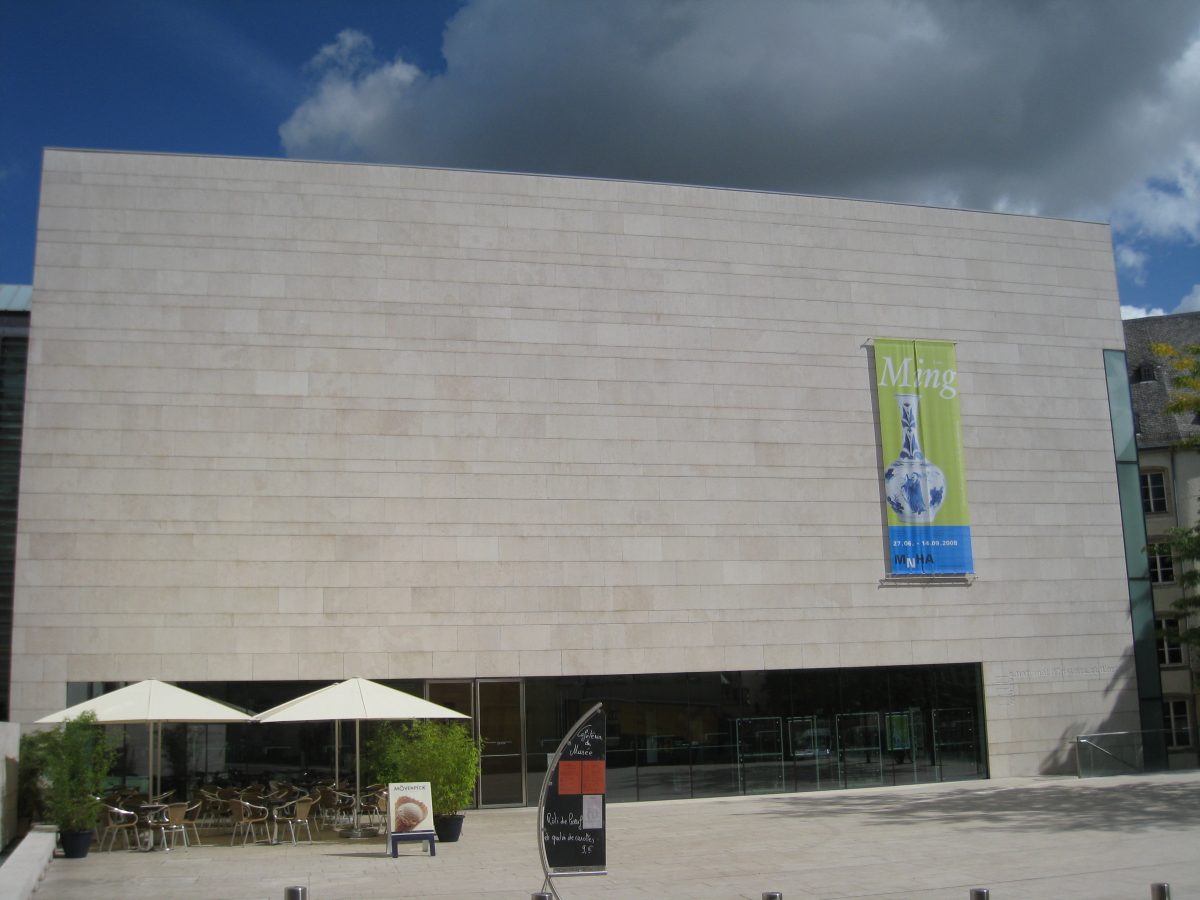 This museum is unlike any other. The National Museum of History and Art has a high cultural and even higher scientific value. It occupies 7,500 square meters of land in southern Luxembourg in the Fishmarket street. This museum has a prominent permanent exhibition, and they also host several special exhibits every year.

It is open for visitors from 10 am to 6 pm from Tuesdays to Sundays except on Thursdays when it is open from 10 am to 8 pm. Tours are also available and they start with the underground level. Admission for the permanent exhibition is free. For the special (temporal) exhibition, admission is 7€ for adults, 5€ per person for a 10 person group tour and 10€ for families (2 adults + children). Admission to the special exhibition is free for students.

Photo by Cayambe on Wikimedia Commons

One place that will certainly stand out from anything else during your trip to Luxembourg is Esch-sur-Sûre. As a part of the Upper-Sûre Nature Park, this small village with its manor houses, cliffs, and walking paths offer a once in a lifetime scene.

The road will take to the Sûre dam where there’s an incredible view waiting for you. It is open all year round and it is free, so make sure to spend some time here during your trip. You won’t regret it. Upper-Sûre Nature Park hosts a lot of festivals and regular events. The most famous is the Water Art Festival which takes place in July and we strongly recommend visiting. 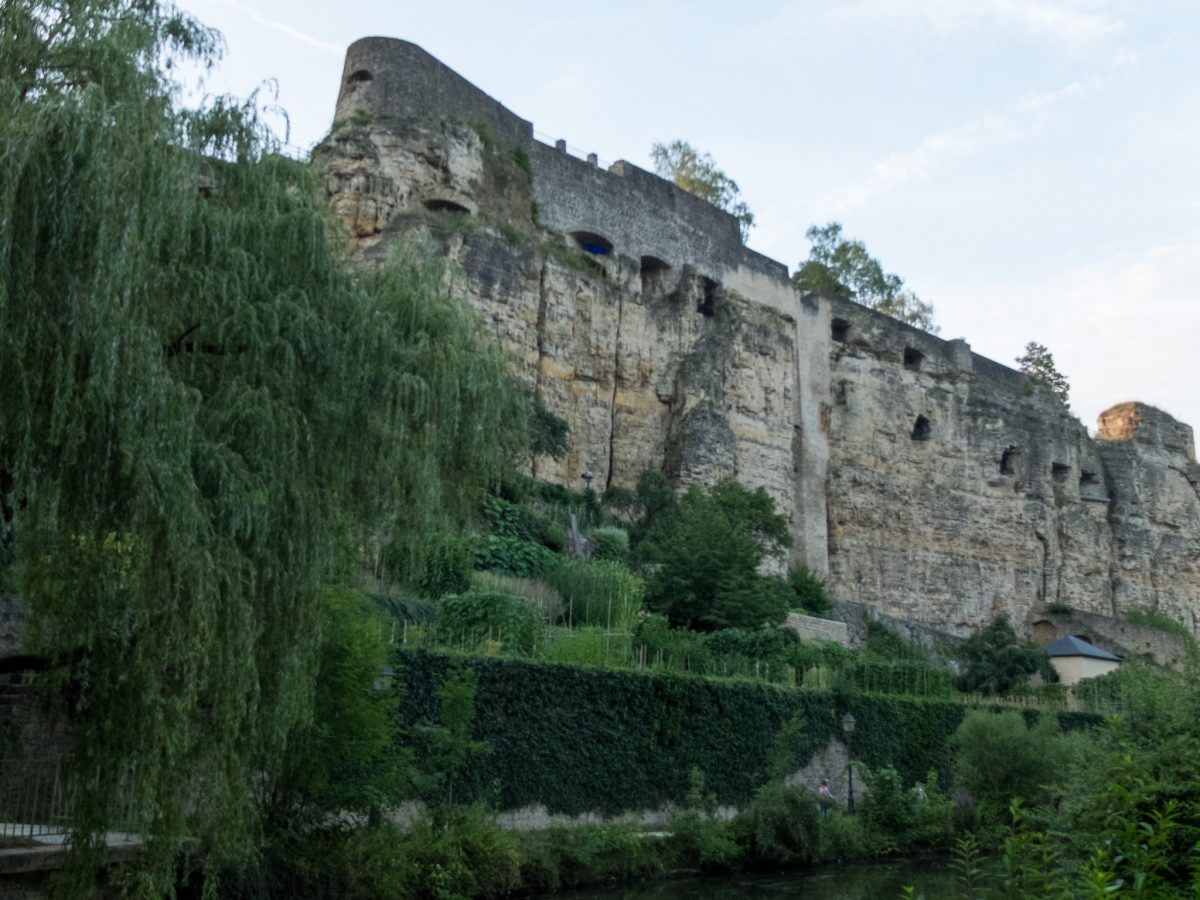 What the Bock of Casemates can offer is something that you have to just experience there. A set of tunnels and galleries that are both rich in history are just the beginning. The foundation of Casemates dates back to 963, and the main part was built in 1644. At its peak, it stretched over 40,000 square meters of land, but today only 17 kilometres are available for tours.

Also known as the Gibraltar of the North, the Bock of Casemates are divided into two sets, the Bock and Petrusse, but Petrusse is only available on school holidays. It is also perfect for children since there are a lot of passageways for them to explore. 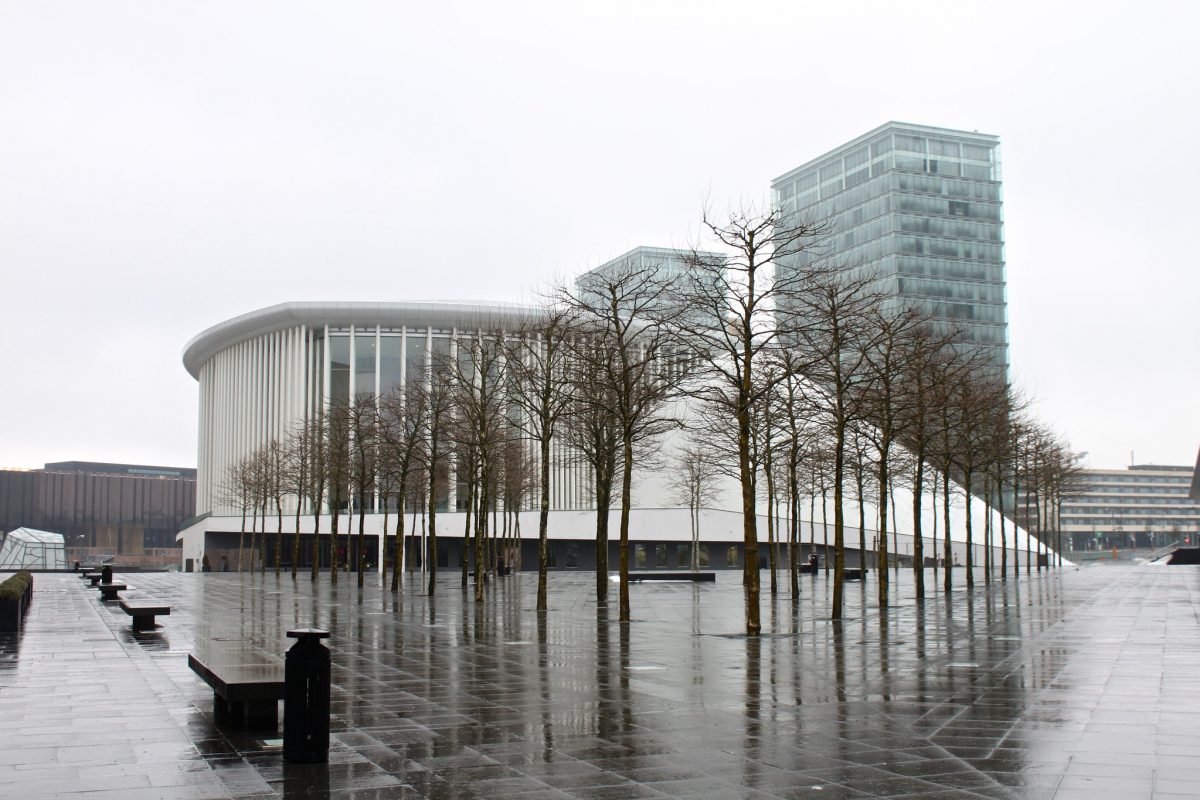 Located in the center of the city, in the Place de l’Europe, Philharmonie of Luxembourg is one of the most prestigious and renowned concert halls in the world. In a short space of time, the Grande-Duchesse Joséphine-Charlotte Concert Hall (official name) succeeded to become famous among the visitors and performers from all over the world. The great acoustics and the ambience around the concert hall are what usually draws in people the most.

Philharmonie of Luxembourg is open all year round. Save some time to visit the concert all when you are in Luxembourg and get ready to be more than amazed. 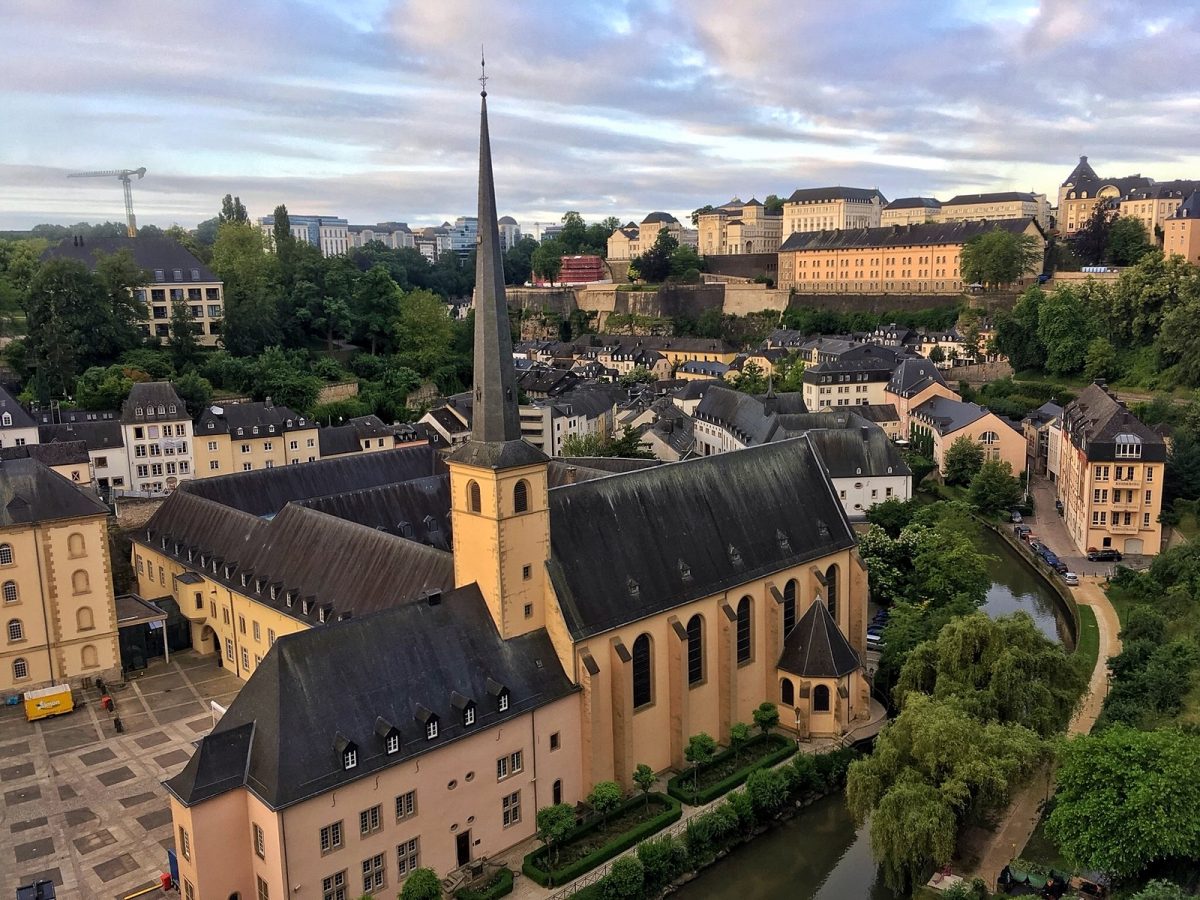 Placed in the southern part of Luxembourg, Neumünster Abbey is not just a meeting place, it is also a place of great cultural value. Built as a Benedictine monastery in the 16th century, this picturesque building now represents the main spot for shows, concerts, festivals and artistic creations.

Since the late 20th century, the monastery became the cultural heart and soul of Luxembourg. You should make a stop here to see and find out why it is so special. We also recommend taking a walk along the Alzette river and visit the medieval Bock fortress nearby. 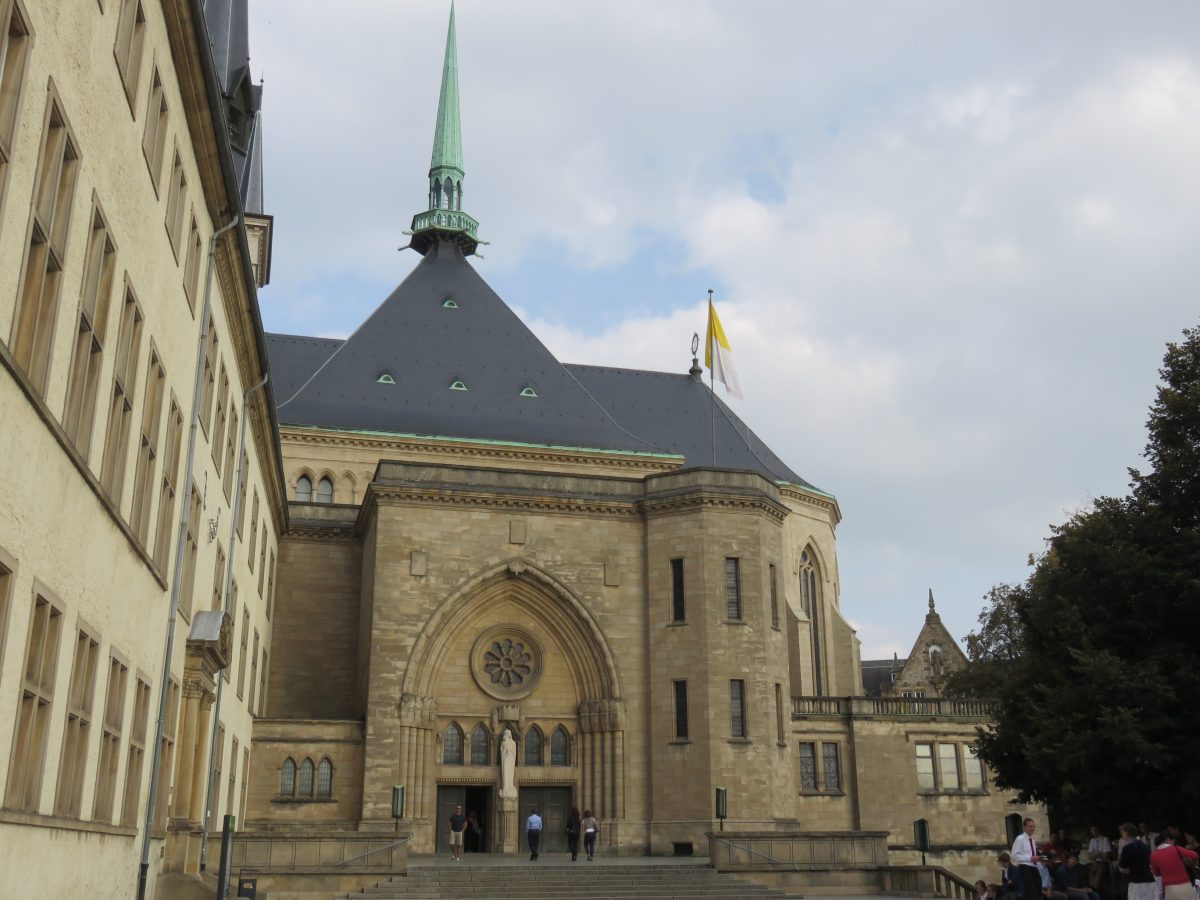 The Notre-Dame Cathedral, also known as The Cathedral of the Blessed Virgin is the only cathedral in Luxembourg. It was built between 1613 and 1621 with a late Gothic design with ornaments done in a Renaissance style. The Cathedral contains the tomb of John the Blind, a count of Luxembourg and several other important historical figures including members of the Grand Ducal family.

It is very popular among politicians and royalty, especially during the national pilgrimage, which is held every year after Easter. The Notre-Dame Cathedral is open every day from 8 am to 6 pm and there is no entrance fee. 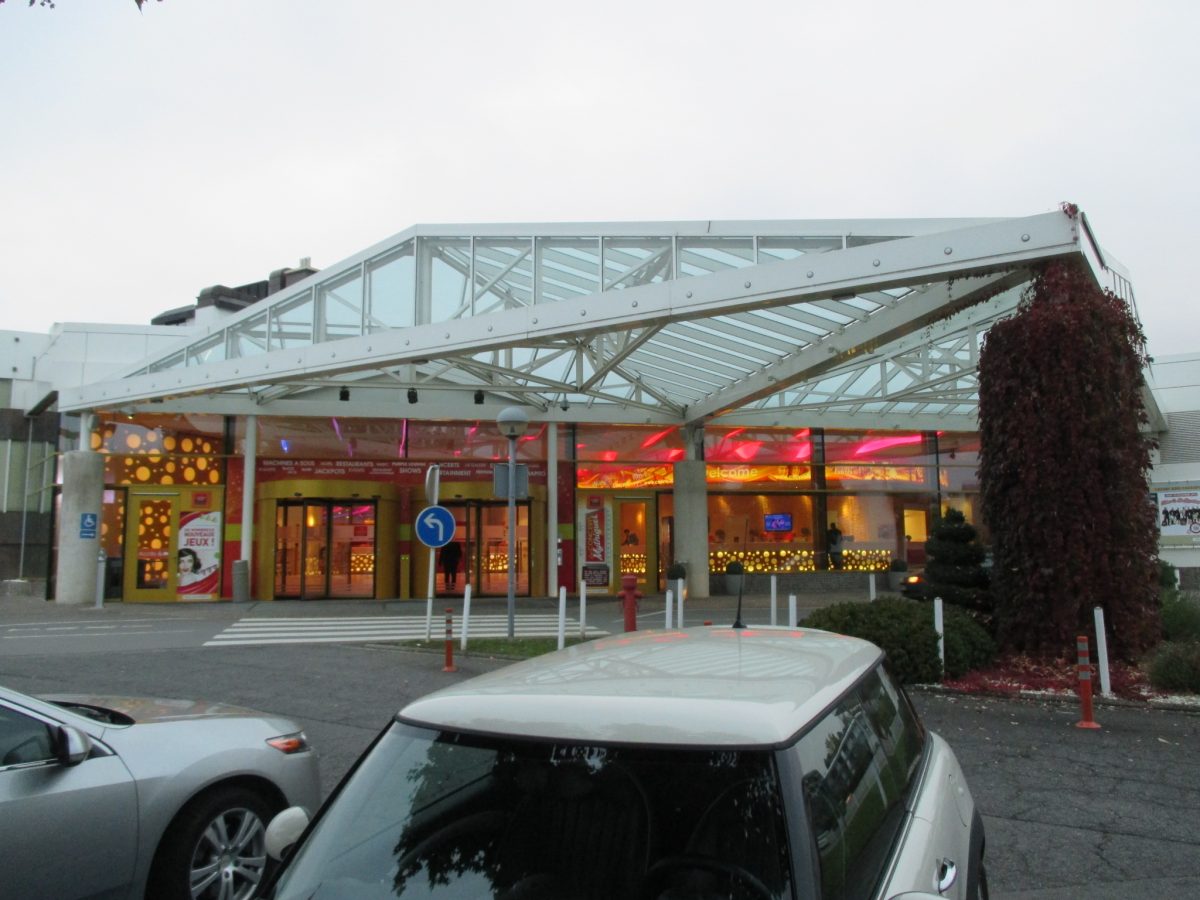 Photo by Arnaud 25 on Wikimedia Commons

Opened on the 16 of April in 1983, Luxembourg’st Casino 2000 attracts players from all over the world. Casino 2000 is not just a casino. It is a great complex with restaurants, hotels, and of course facilities for gambling within.

When you travel to Luxembourg, make sure to visit or stay at this outstanding complex. If you are not fond of taking your chances on various slot machines, roulettes or blackjack tables, then you should attend to at least one of its shows and enjoy the performance of well-known stars and bands. 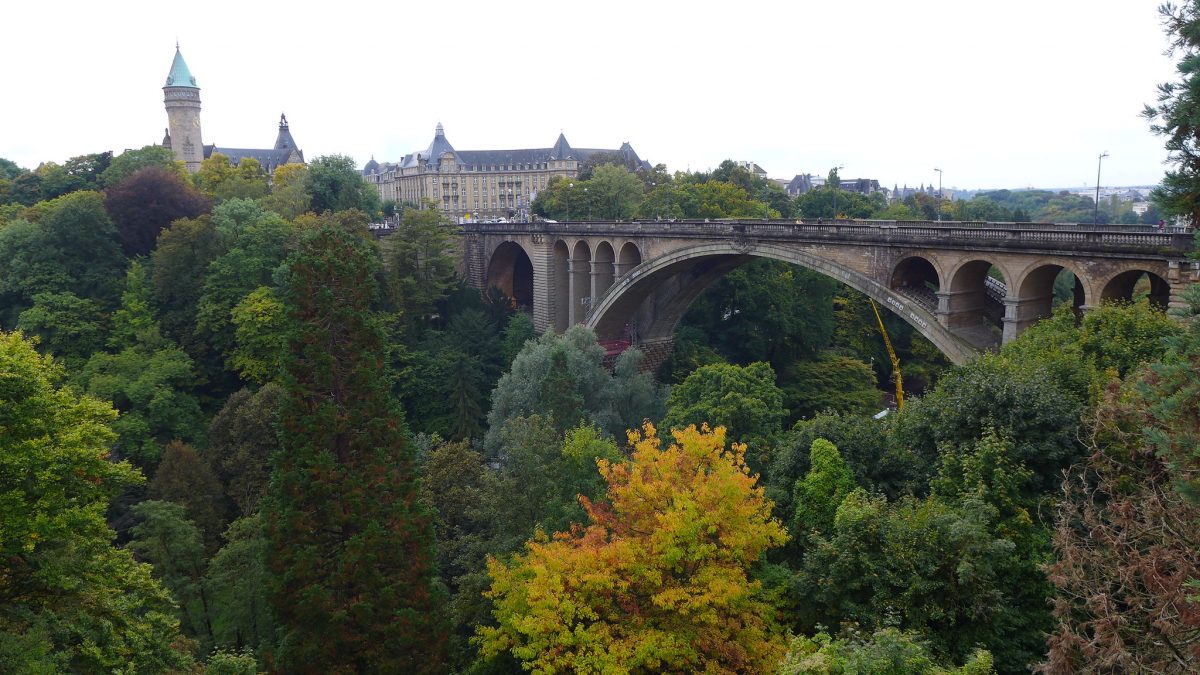 The national symbol of Luxembourg is something that you wouldn’t want to miss when you’re in the country. Constructed between 1900-1903, it was the biggest stone arch bridge in the world. The bridge was named after the Grand Duke Adolphe who was the ruler of Luxembourg from 1890 until 1905.

Adolphe Bridge or the New Bridge has four traffic lanes and two pathways for pedestrians, making it very accessible both on foot and by car. The sight from the bridge is one of a kind. If you are a romantic, you should really be here at sunset as there will be an astonishing view of the gorgeous Pétrusse Valley. 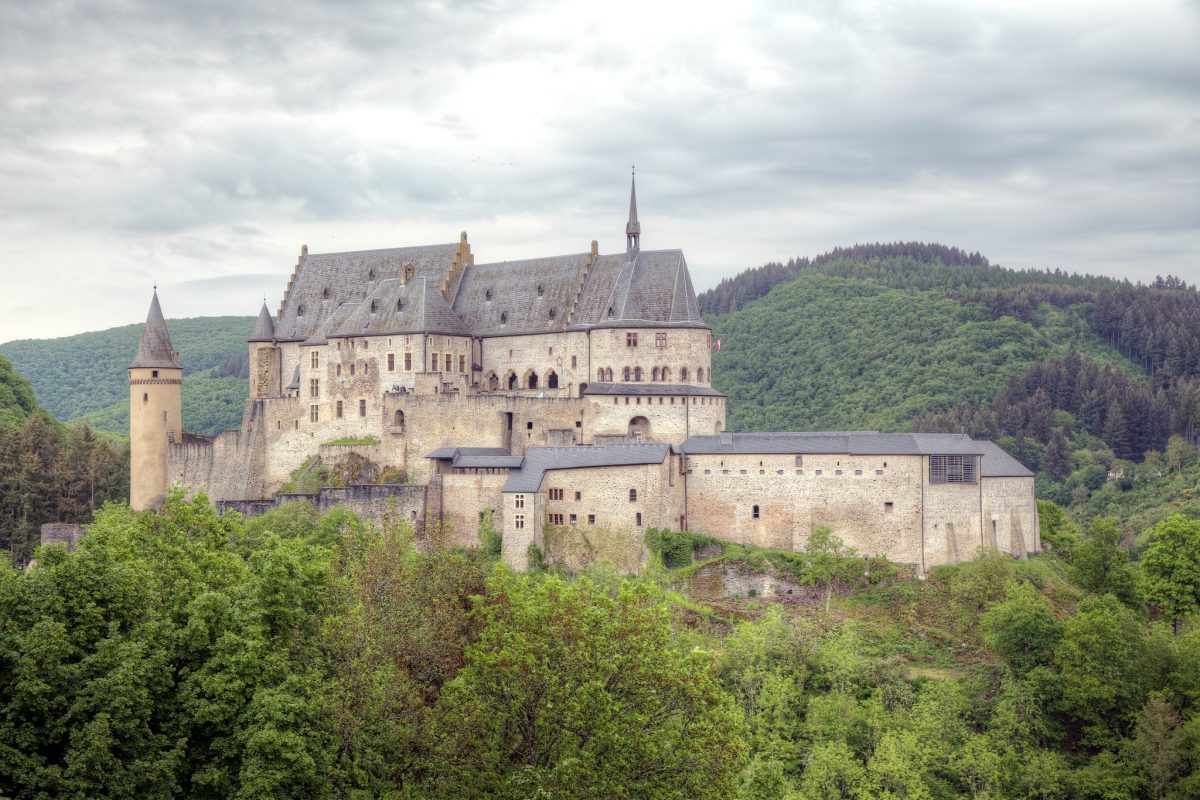 If you want to know what makes the town of Vianden so unique then you should visit the Vianden Castle located in north Luxembourg. It was built on the foundations of a Roman castle, between the 11th and 14th century and it was the residence of the Count of Vianden.

Today, it is a monument of great historical and cultural importance. Even if you don’t like the history of this place, you will most certainly cherish a breathtaking view of the charming town of Vianden. It is open for visitors every day from 10 am and the admission rate for adults is 7€, 2€ for children ages 6 to 12, 4.5€ for students, and 6€ for seniors. A medieval festival also takes place in Vianden Castle annually at the beginning of every August. 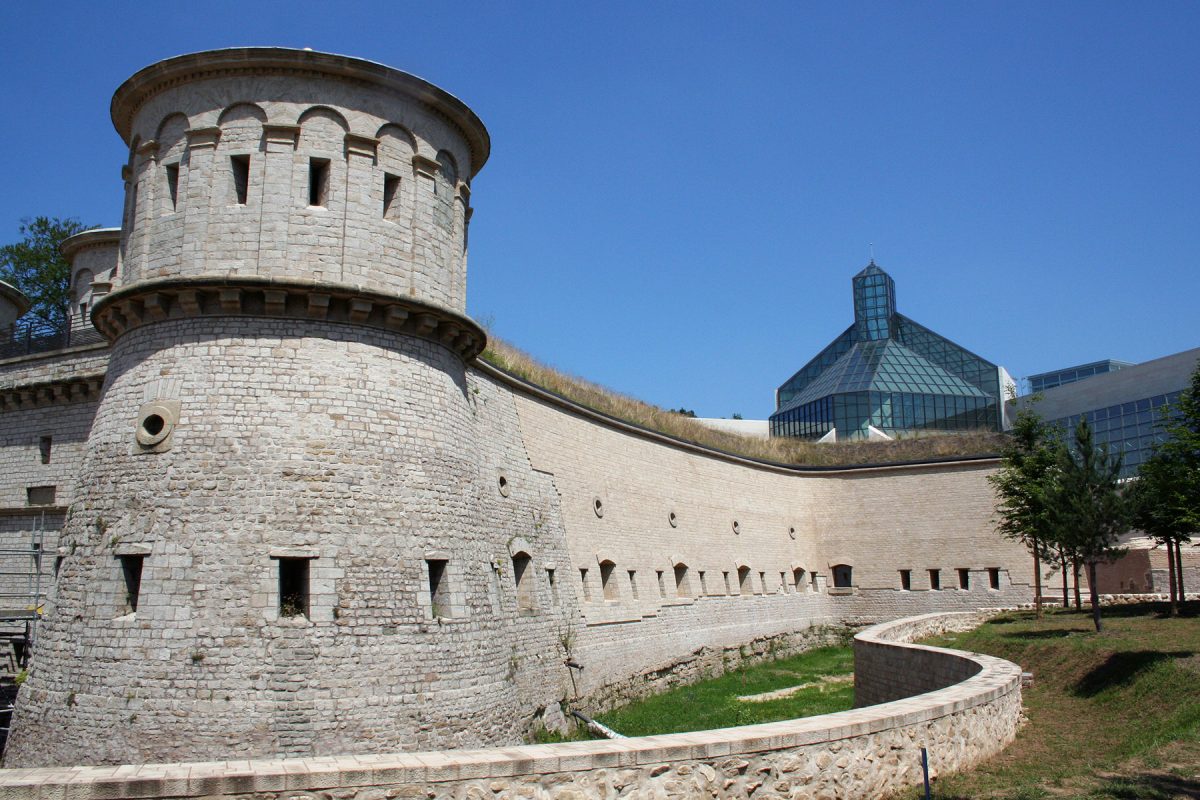 Located in southern Luxembourg, the Grand Duke Jean Museum of Modern Art or MUDAM for short was opened on July 1st 2006. It was built on the foundation of the fort Thungen on the design of the architect Ming Pei. Artists from all over the world love MUDAM for showcasing art without censorship and respecting artistic expression.

Permanent exhibits in MUDAM contain some of the most famous pieces of contemporary art, but there are also temporary exhibits with well-known pieces from artists all over the world. Additionally, there is also a library, where you can find a collection of documents of every work on modern art, design, and architecture that was part of the exhibition.

Grand Duke Jean Museum of Modern Art opens from Wednesdays to Mondays from 10 am to 6 pm. Admission for adults is 8€, and it is free for students under 26 years. 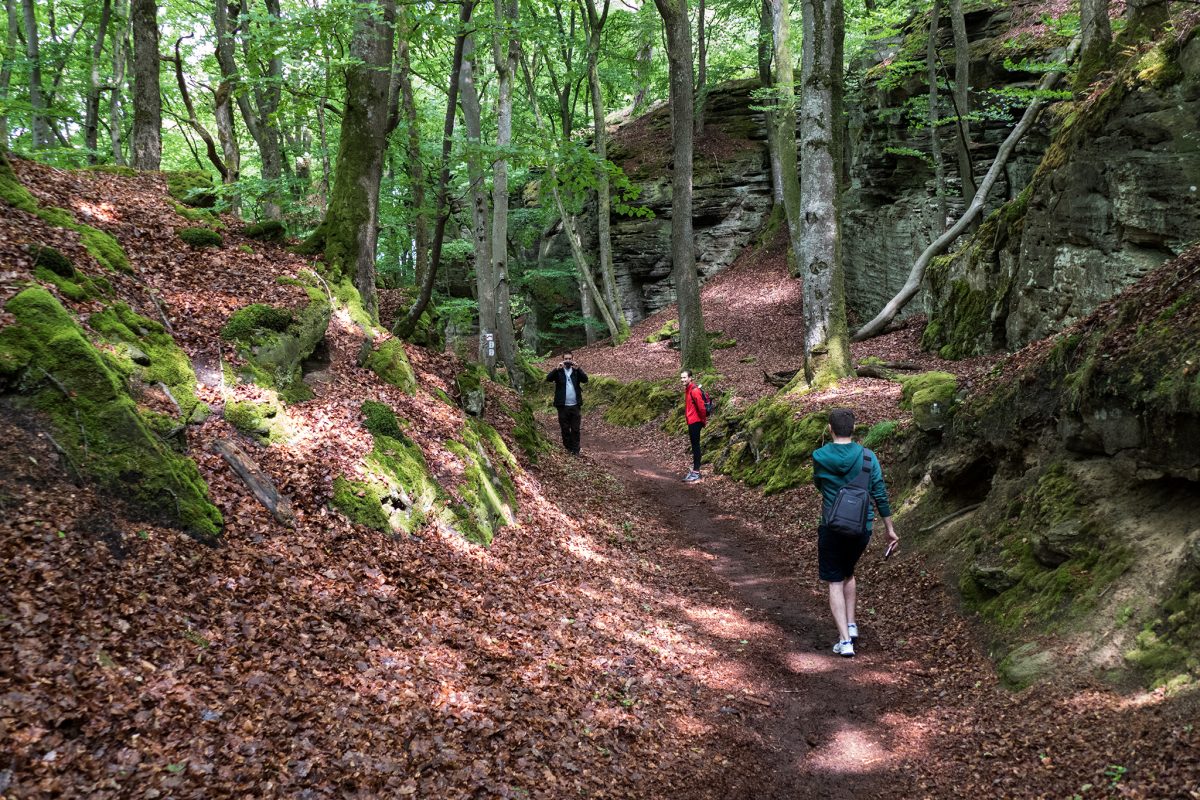 Hiking lovers can also find their paradise in Luxembourg. Mullerthal Trail is 112km long and it contains three big paths. These paths are labelled Route 1, Route 2 and Route 3 respectively. Every one of them offers you something different. Route 1 is perfect for those who love history, Route 2 takes you through the heart of Little Switzerland and Route 3 has beautiful castles around it and it’s perfect for couples hiking together.

You can choose one of these three routes and they’re all connected. Hiking is free of charge and it’s the perfect way to spend some time in nature and explore Luxembourg. 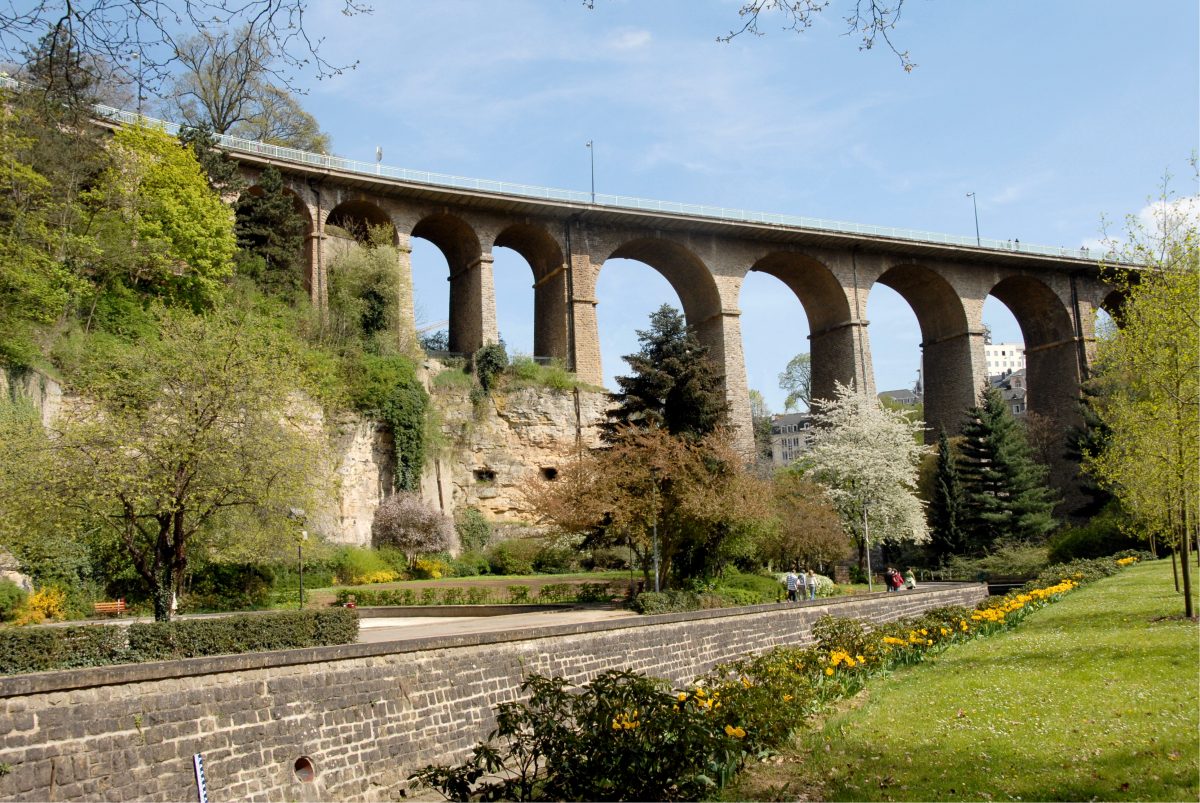 Photo by Cayambe on Wikimedia Commons

If you want to take a walk where there’ll be a stunning view then Passerelle is the place where you should go. The Passarelle, also known as The Luxembourg Viaduct or The Old Bridge, was built between 1859 and 1861, and it is located in southern Luxembourg.

The view from the bridge is perfect for those who like to take photographs. It’s 45m from the valley floor and it is 290m long. There’s a marvellous view from the bridge. You can see the breathtaking old city and have a perfect look at a river. Built to connect the city center and the railway station, it still has it’s function, but it is now also a beautiful tourist attraction. 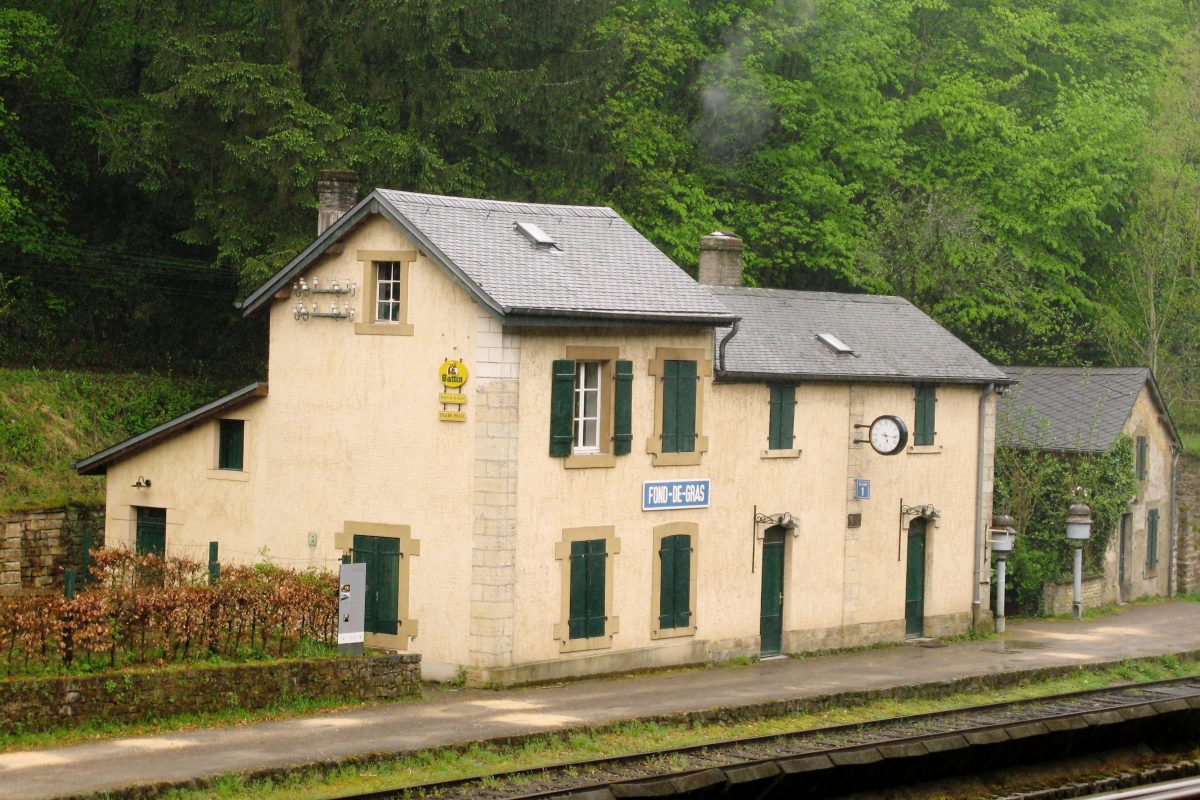 In the south of Luxembourg, you can find fun for the whole family in Minett Park. This open-air museum offers various things to do. Attractions include Fond-De-Gras, Village Lasauvage, Celtic oppidum of Titelberg and the former mine, GieleBotter.

You can take a ride on the romantic “Train 1900”, walk trough beautiful natural paths or visit some old mining galleries. If you’re visiting the mines, make sure you wear warm clothing. You can also visit the two museums and learn about the history of Village Lasauvage as well as minerals and fossils.

This was an important industrial zone for over a century. Miners extracted iron from the mines here and they transported it by trains to plants. The park opens on Sundays, holidays and in seasons from 2 pm to 6 pm. 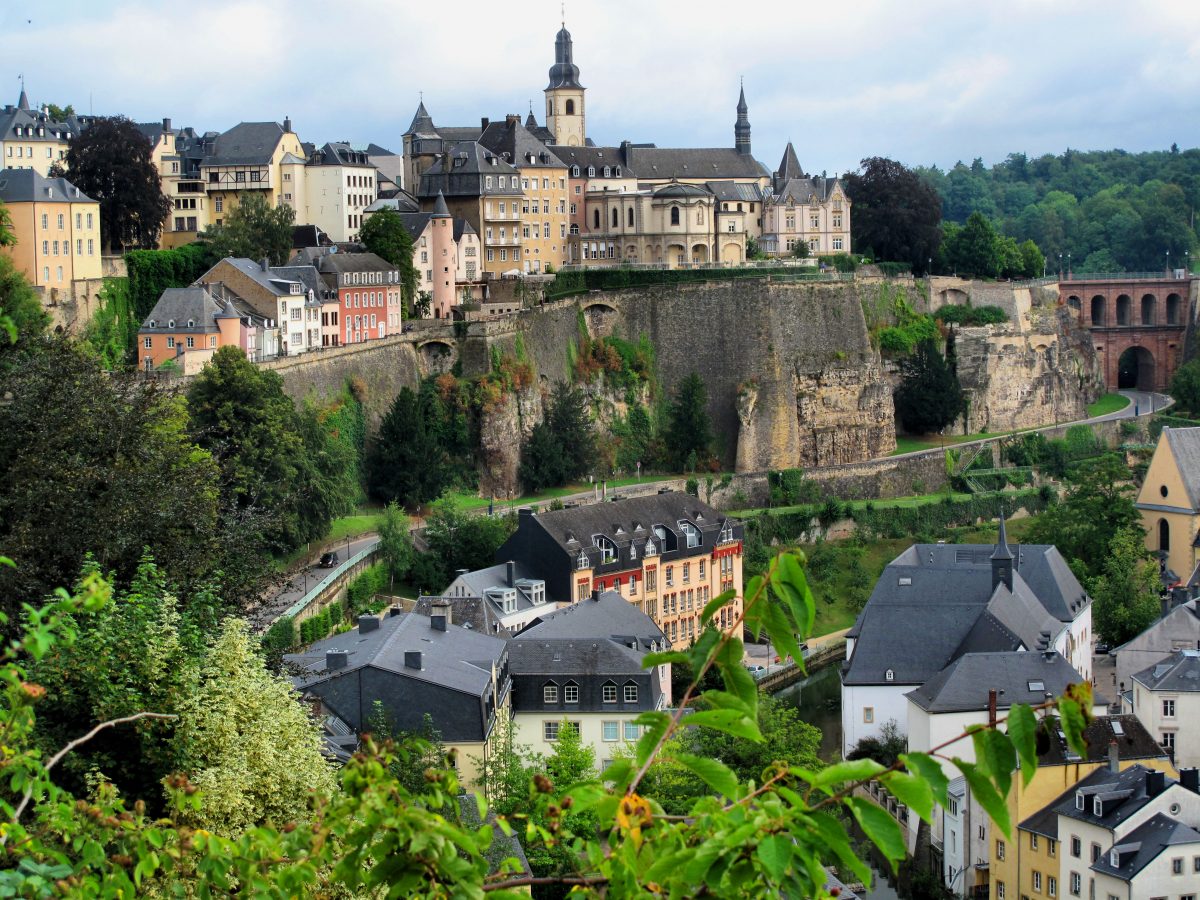 Chemin de la Corniche is another perfect place in Luxembourg for those who like long walks with magnificent sights. It was built in the 17th Century by the Spaniards and the French.

“Europe’s most beautiful balcony”, called by Batty Weber, is a 600-meter promenade along the river of Alzette, surrounded by the old ramparts. Across the river is the Wenceslas Wall and at the bottom of the valley, you will see the wonderful town of Grund, and the Church of St. John. The panorama on the valley of Alzette is undoubtedly something special, and something that will make you come back for more.

15 Best Wildlife Sanctuaries in India
Prev: Rum: All You Need... Next: Your Complete Gui...