The historic Capital City of Scotland; Edinburgh, is the UK’s second most popular tourist destination behind London. And it’s not difficult to see why. With its hilly landscape and a wealth of historical and cultural attractions, including UNESCO World Heritage Sites, there are endless things to do in this buzzing city.

Here we list the unmissable places to visit on your holidays to Edinburgh, Scotland. 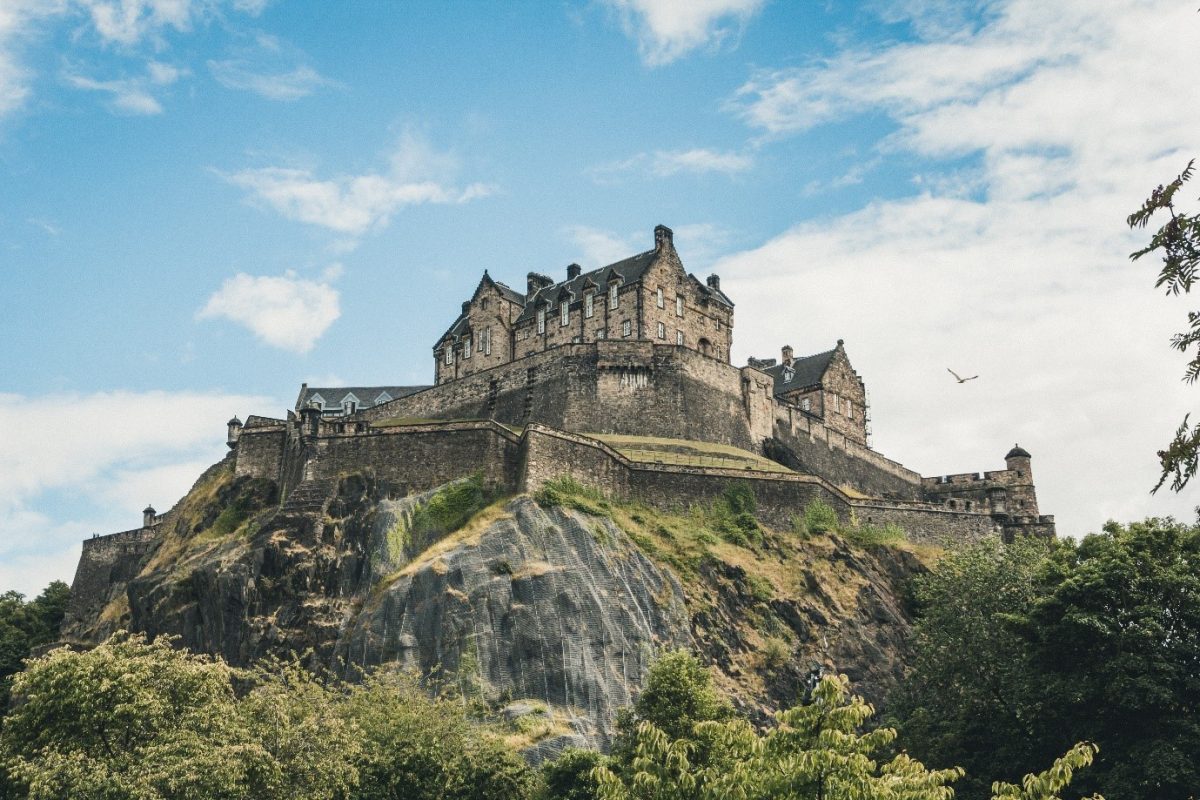 © Photo by Jörg Angeli on Unsplash

You can’t visit Edinburgh without visiting the world-famous historical icon sitting on top of Castle Rock. Edinburgh Castle dominates the skyline of the Capital and offers stunning views over the city. The oldest part of the castle; St Margaret’s Chapel, dates back to the 12th century. On the other hand, the Scottish National War Memorial dates back just after the First World War. Most importantly, the castle houses the Crown Jewels of Scotland (which includes the crown, sword, sceptor and Stone of Destiny.)

As the city’s most popular attraction, it’s advisable to get there early in the Summer season to beat the crowds. The Castle opening times are from 9.30am-6pm in the Summer months. During winter, it opens from 9.30am-5pm.

You can purchase tickets online for £17.50 an adult and £10.50 for a child. These tickets include an optional guided tour of the castle. The castle is just a short uphill walk from Waverley Train Station. 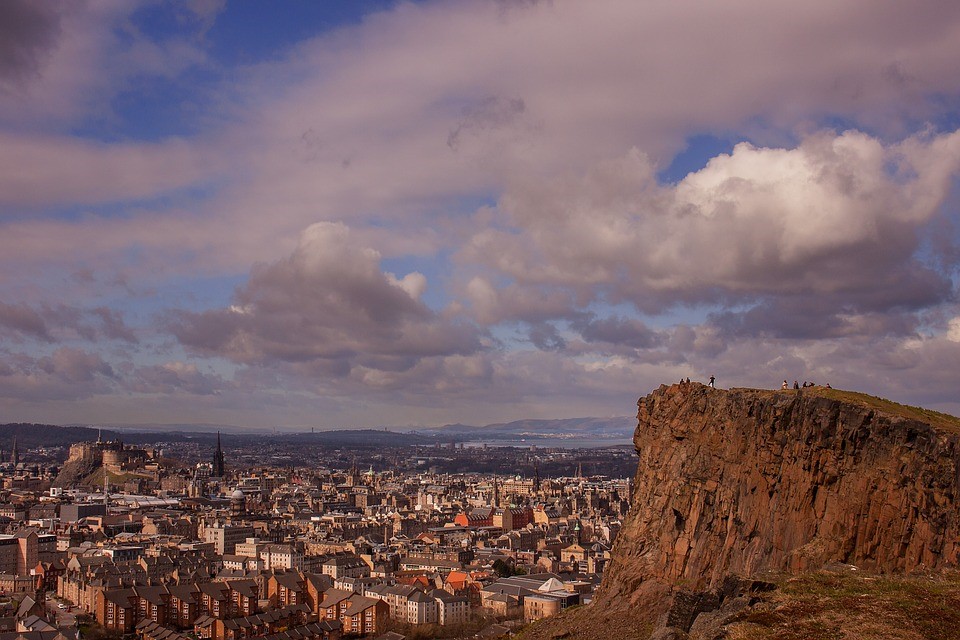 © Photo by DragonTools on Pixabay

Arthur’s seat, formed from an extinct volcano, is the main peak of a group of hills in Edinburgh, with its highest point sitting at 251 metres. The spectacular landscape offers panoramic views of the city as well as being an excellent sunrise/sunset spot for avid hikers.

The main route to the summit starts at the carpark by Holyrood and is a circular route via Salisbury Crags. The ascent of Arthur’s Seat is very steep and rocky, so it is important to take a good pair of walking boots. If you take the path which moves away from the road, you can avoid the steep path to Salisbury Craggs. For non-hikers the easiest route to the summit involves a drive or walk to Dunsapie Loch and then a 30-minute walk up a steep slope.

There is no entry fee to Arthur’s seat but you should allow at least 2 hours for your visit to go up and down. 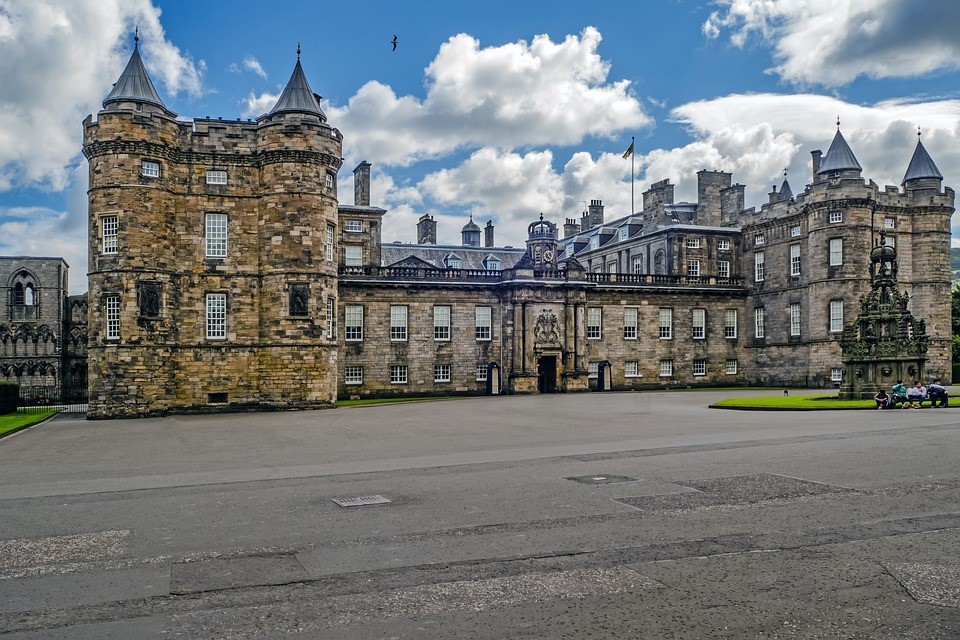 © Photo by WolfBlur on Pixabay

Situated at the end of the Royal Mile, the Palace of Holyroodhouse, most commonly known as Holyrood Palace, is the official residence of the British monarch when carrying out royal engagements in Scotland (namely Queen Elizabeth II).

Purchase your Royal Visit tickets priced at £24.50 and £17.70 respectively for adults and children. This includes admission to the Palace, The Queen’s Gallery and a Garden History Tour. A single adult ticket to the palace costs £15, with a child ticket costing £8.70. 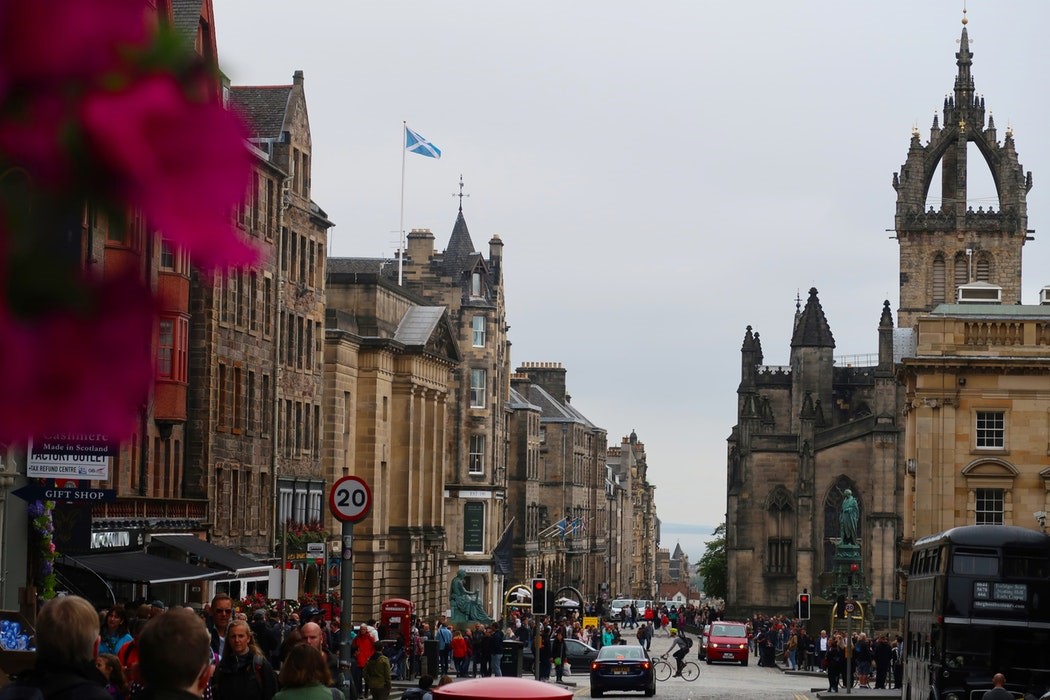 © Photo by Emran Yousof on Unsplash

The Royal Mile is a series of streets forming the Old Town of the city leading from the Castle gates to the Palace gates. The street today houses a mix of restaurants, pubs, shops and visitor attractions, and during the annual Edinburgh festival becomes the main spot for tourists, entertainers and buskers.

Approximately a third of the way down from the Castle heading towards the palace sits Parliament Square which houses both the law Courts and the old Parliament of Scotland. 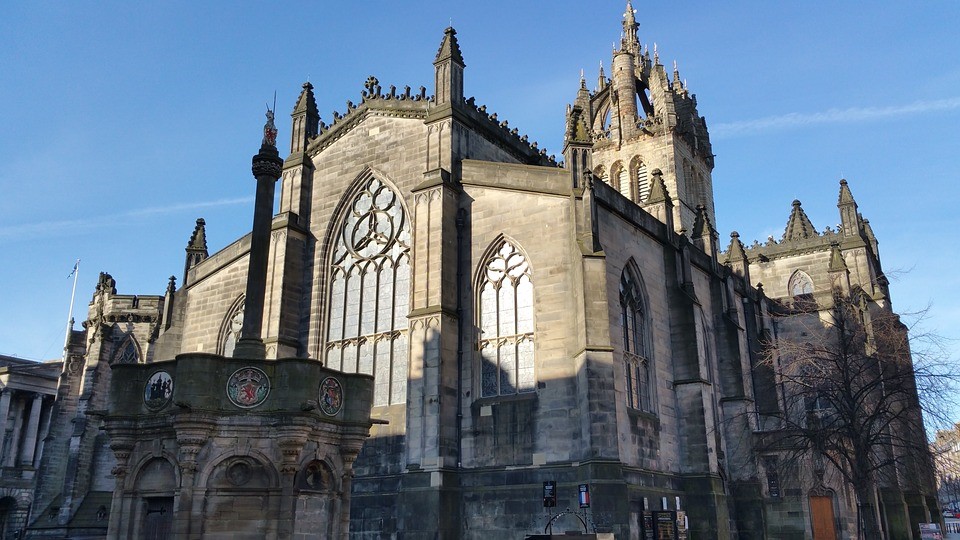 © Photo by waldomiguez on Pixabay

Standing within Parliament Square, St Giles Cathedral (also known as the High Kirk of Edinburgh) is the principal place of worship in Edinburgh, founded in 1124.  Visitors can enjoy free entry although are encouraged to make a donation. There is the option of booking a guided rooftop tour which involves climbing up the tower and enjoying stunning views of the old town as well as admiring the wooden interior of the St Gile’s clock tower.

The rooftop tours are available for up to 4 people on Saturdays from 10.30am-4pm and Sundays 1.30pm-4pm at a cost of £6 per person. The cathedral is open all year round and a detailed schedule of opening times can be found online. All are welcome to attend regular daily services at 12 noon. 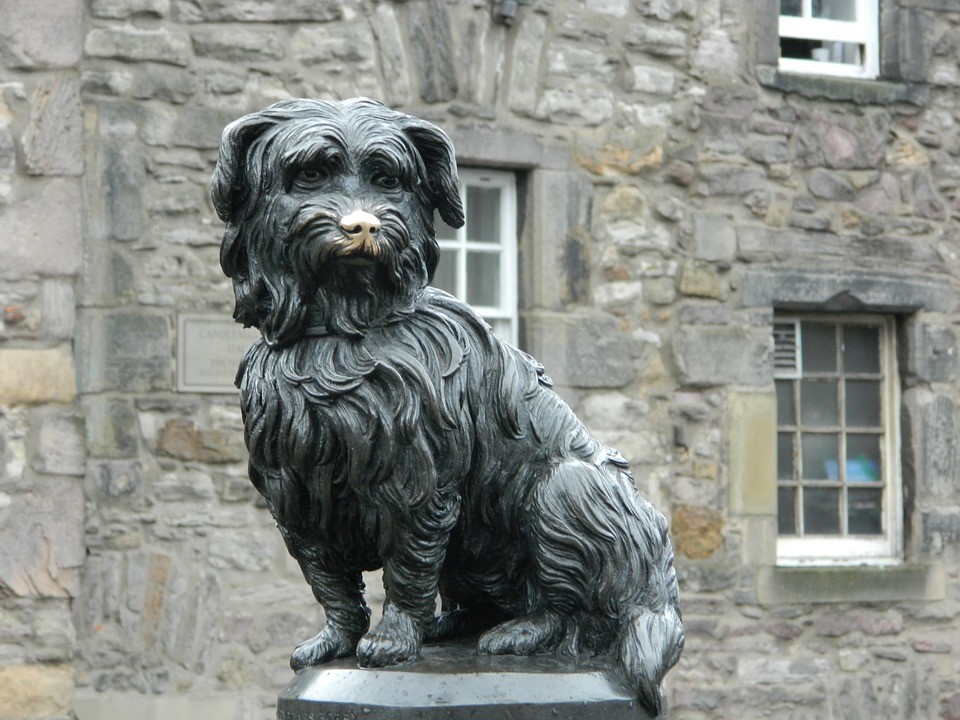 The Old Town is the oldest part of Edinburgh dating back to Medieval times, and together with the New Town forms part of a protected UNESCO World Heritage Site. It is home to the top sights in Edinburgh including the Royal Mile and St Giles Cathedral and offers visitors a picturesque landscape of cobbled streets, steep staircases and hidden courtyards, with the Castle perched at the top. Anywhere you walk in the old town, you will be following in the footsteps of former Kings, Queens and Knights.

Don’t miss the Greyfriars Bobby fountain – a bronze life size statue of a Skye Terrier who became known for supposedly spending 14 years guarding the grave of his owner John Gray (a former Edinburgh police officer) at Greyfriars Kirkyard until the dog itself died on 14 January 1872. The memorial can be found in front of Greyfriars Church and next to the National Museum of Scotland.

The National Museum of Scotland 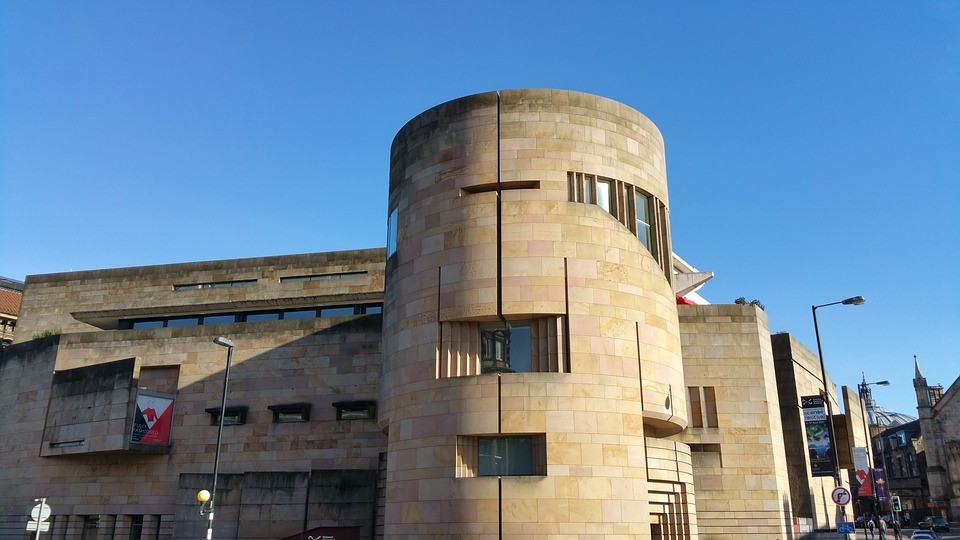 © Photo by waldomiguez on Pixabay

The National Museum of Scotland was formed in 2006 after merging with the new Museum of Scotland. It is located in the Old Town on Chambers Street and houses collections relating to Scottish antiquities, history and culture. The Royal Museum connected next door housing collections covering science and technology, natural history, and world cultures.

One of the most well-known exhibits is the stuffed body of ‘Dolly the Sheep’ which was the first successful mammal cloned from an adult cell. The museum is open daily from 10am-5pm and admission is free. 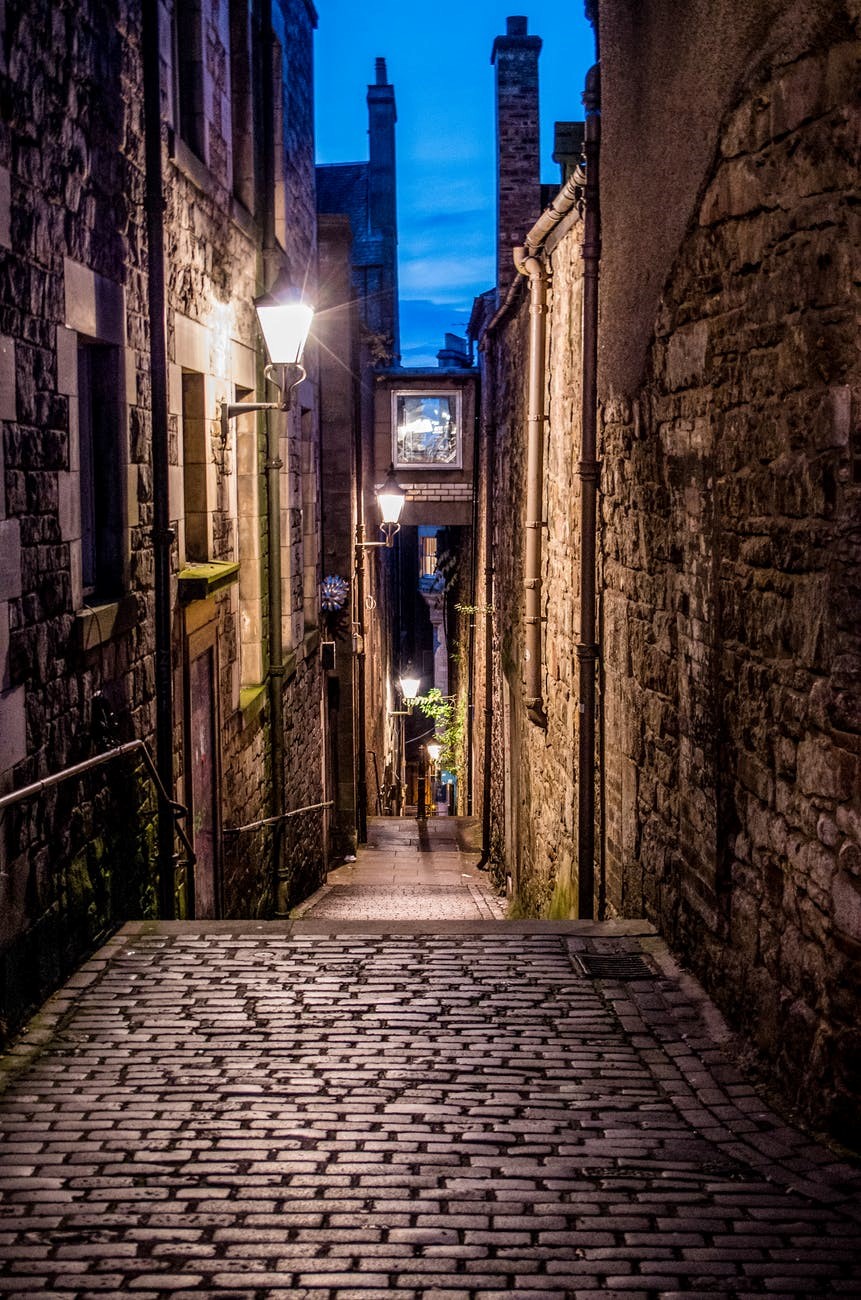 © Photo by wenzlerdesign on Pixabay

Mary King’s Close is a historic site located underground on the Royal Mile, a ten-minute walk from Edinburgh Castle and across from St Giles Cathedral. Mary King was a merchant burgess who resided on the Close in the 17th century. Today, the Real Mary King’s Close is an award-winning visitor attraction taking guests on a one-hour social history tour, using a costumed character tour guide.

To guarantee space on one of the tours, it is recommended to book in advance online. Adult tickets are priced at £16.50 whilst children are priced at £9.95. Tours start from 10/10.15am in the Winter and from 9.30am in the Summer. In the summer months, tours are available until 9.30pm. 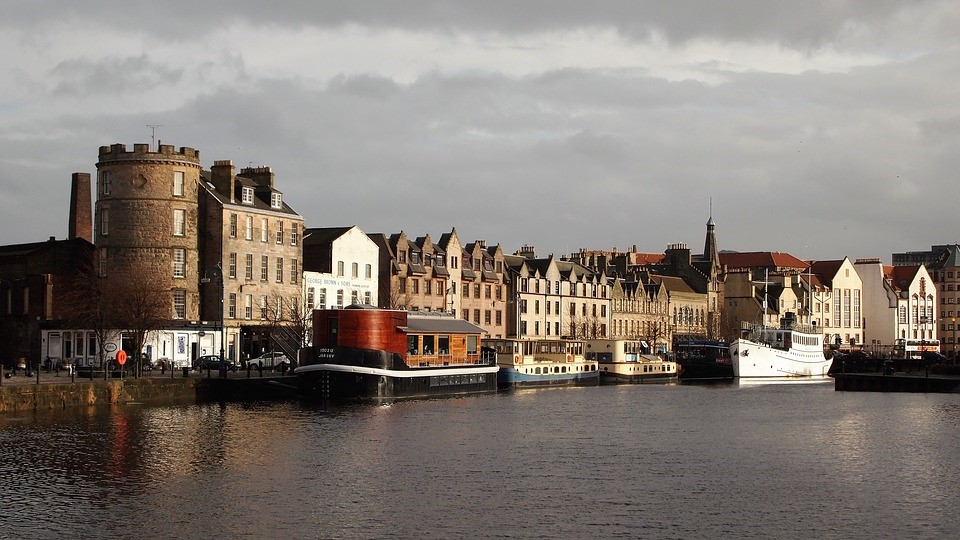 © Photo by sumulee on Pixabay

This famous ship is the former royal yacht of Queen Elizabeth II and was in service from 1954 until 1997, travelling more than a million nautical miles across the world. The Britannia was used for state visits and official receptions as well as Royal honeymoons and family holidays. Now, it is in service as a visitor attraction and a venue for exclusive evening events, located on the waterfront in Leith, just a 15-minute drive from the city centre.

Excitingly and new for 2019, located just a stone’s throw away, is the new luxury floating hotel; Fingal – a former Northern Lighthouse Board ship, where you can enjoy an opulent night’s stay. 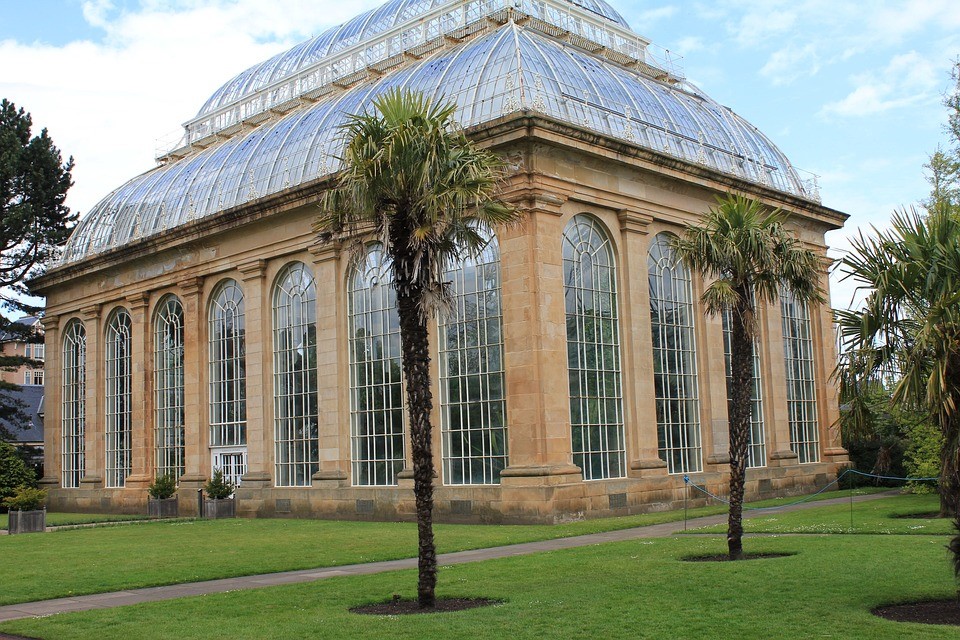 © Photo by bluebudgie on Pixabay

Located just a mile from the city centre, the Royal Botanic Garden Edinburgh is home to one of the biggest and best plant life collections in the world. The gardens offer unprecedented views of the city skyline covering an area of around 72 acres with over 10,000 plant species. The garden features 10 glasshouses in total, each with a different climatic zone, and the Victorian Temperate Palm House is one of the tallest traditional palm houses ever built back in 1858. Other highlights include the Chinese hillside, the Rock garden and the Queen Mother’s memorial garden.

The Botanic garden is a great resting spot away from the rest of the city and admission is free to the gardens themselves. Get your tickets to the glasshouseat at £6.50 for an adult with children going free. The gardens and glasshouse are open from 10am all year with differing closing times dependant on the season. 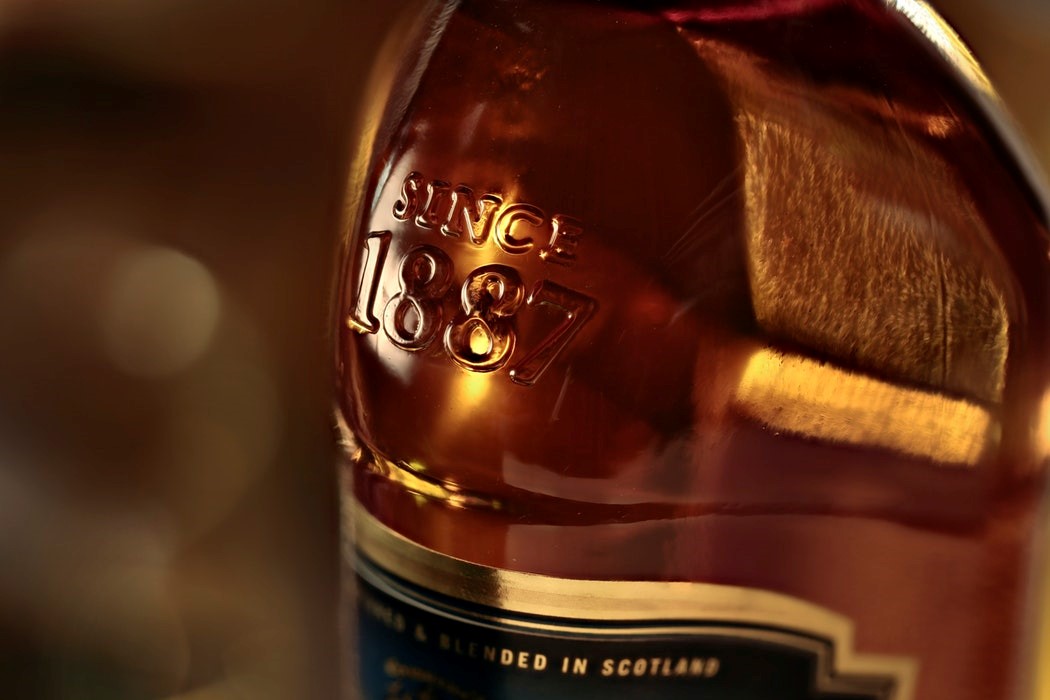 © Photo by Piotr Miazga on Unsplash

This fun and informative attraction offers a great introduction to Scotland’s national drink; Scotch Whiskey. It is located next to the famous Castle on Castlehill. Learn about how the whisky is made and produced whilst on a tour through a replica distillery.

A whisky tasting for over 18s is included (as well as a whisky tasting glass to take away) and there’s also a whisky barrel ride to entertain all ages. Various tour packages are available but the silver tour (which includes the above) starts at £16 for adults and £8 for children. 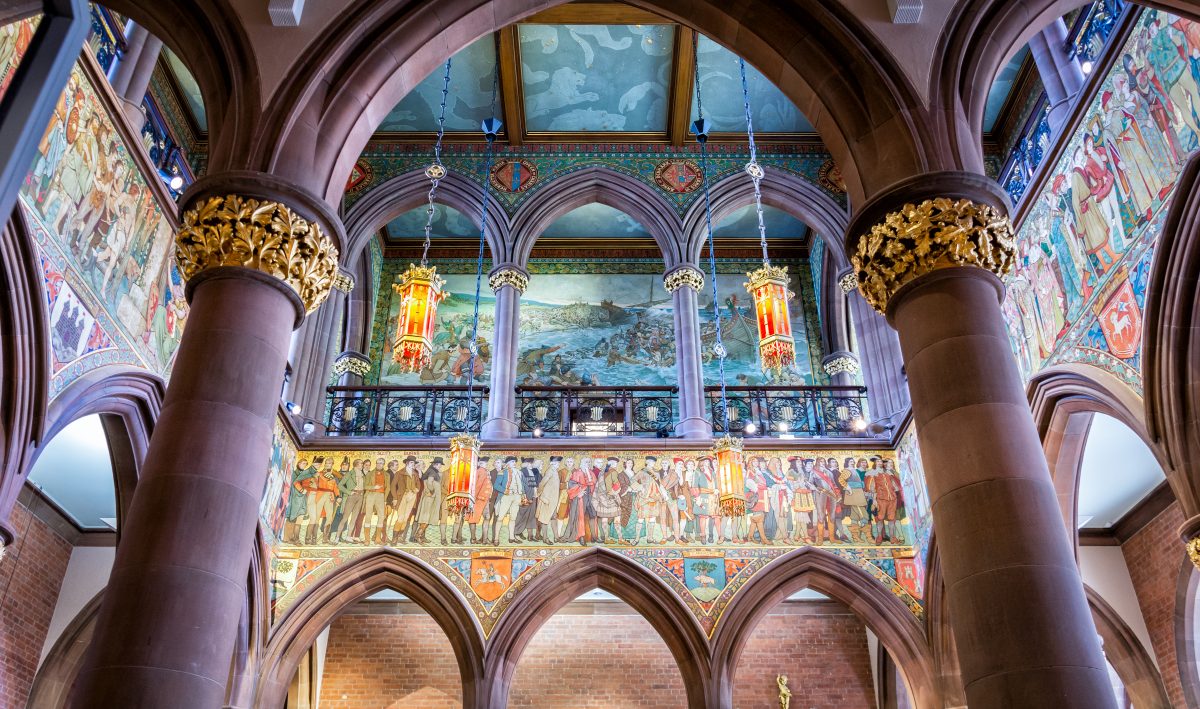 Located on Queen Street, the Scottish National Portrait Gallery is housed in a beautiful red sandstone neo-gothic palace. The gallery opened in 1889 and was designed by Sir Robert Rowand Anderson. Admission is free and opening times are from 10am-5pm each day.

Exhibits include portraits of Mary Queen of Scots, Prince Charles Edward Stuart and Robert Burns. More recent pioneers in science, sport and the arts can also be found within the Gallery, as well as the beautiful Victorian Library. 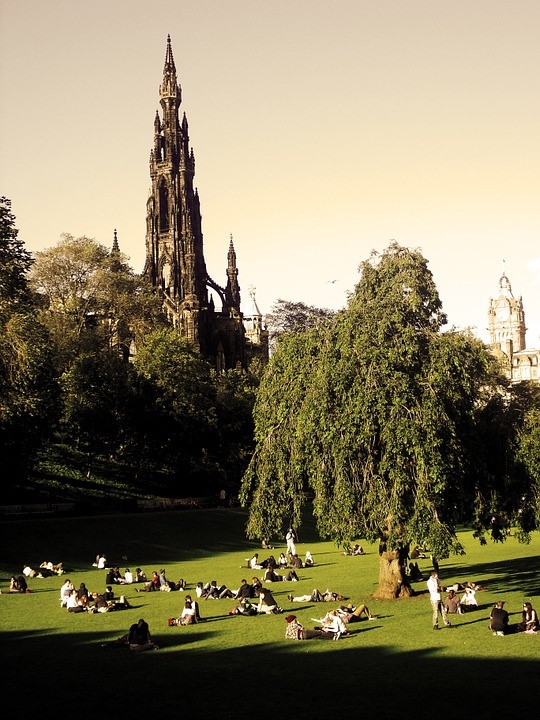 © Photo by DesignFife on Pixabay

Princes Street Gardens are two neighbouring public parks; East and West, in the centre of Edinburgh. The parks are within easy reach from Waverley Train Station. East Princes Street Gardens is home to the second largest monument to a writer in the world – the Scott Monument – a Victorian Gothic monument to Sir Walter Scott, a Scottish author. The monument itself stands at 61.11 metres high and has a number of viewing platforms offering spectacular views over the city.

Tours run each day from 10am until 4.30pm. West Princes Street Gardens are home to the Ross Bandstand and Ross Fountain, named after the Chairman of the Distillers Company Ltd; William Henry Ross. 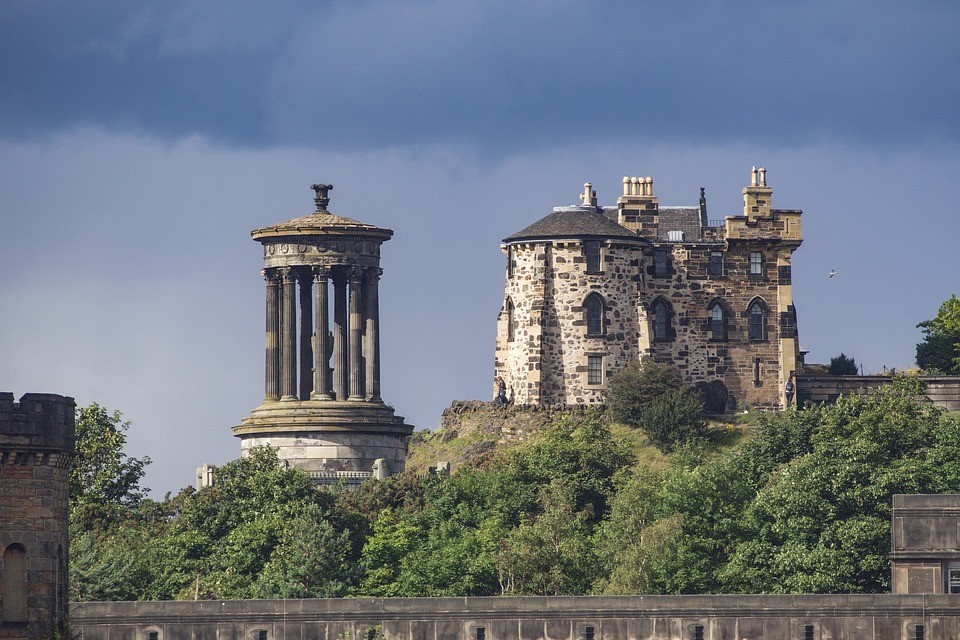 © Photo by WolfBlur on Pixabay

A hill in central Edinburgh, Calton Hill is included in the city’s UNESCO World Heritage Site. It is also home to the Scottish Government headquarters, as well as several significant historical monuments. Its claim to fame would be the Athenian Acropolis type monument standing out from the skyline. The unfinished monument was supposedly meant to be a direct replica of the famous Pantheon in Athens. Unfortunately, funds ran out and work was discontinued.

Other notable monuments include Nelson’s Monument (shaped like an up-turned telescope), Dugald Stewart Monument, the Old Royal High School, Robert Burns Monument, Political Martys’ Monument, as well as the City Observatory. The hill offers fantastic panoramic views to the city, coast and islands, rivalling the views from the steeper Arthur’s seat. The hill is also the venue for the Beltane Fire Festival, held 30 April each year.

Entry to the hill and monuments is free. 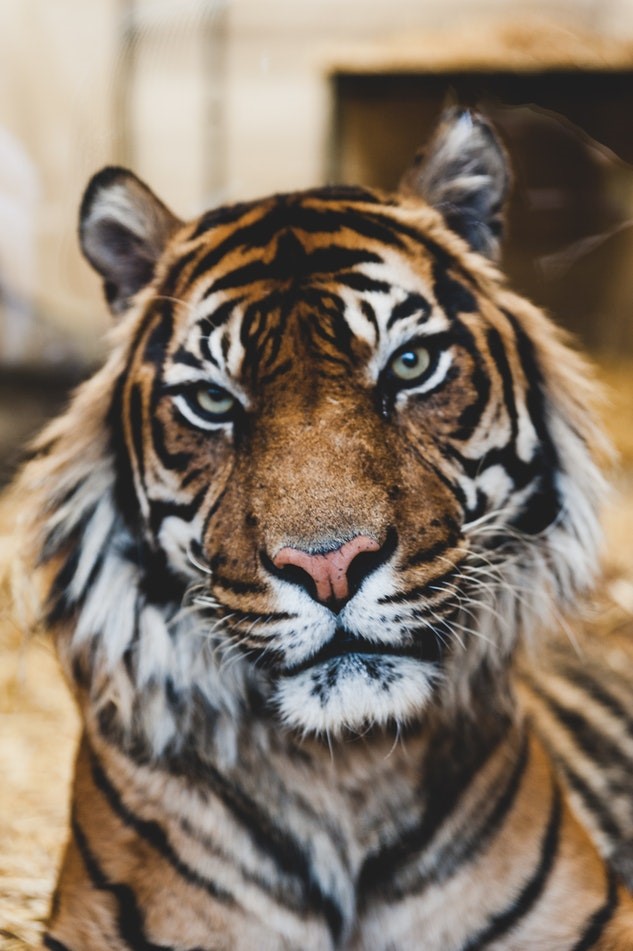 © Photo by Ian Robinson on Unsplash

A firm family favourite, Edinburgh Zoo was founded as a registered charity in 1909 and opened to the public in 1913. It is located on Corstophine Hill in a large area of wooded hillside and is home to over 1000 rare and endangered animals. Most significantly, the zoo is home to the UK’s only koalas and the first Giant Pandas in the UK for 17 years.

You can purchase tickets online at £17.95 for adults and £9.00 for children. The zoo opens from 10am every day and closes between 4 and 6pm, depending on the season.

The zoo is easily accessible by car or public transport. It is only 3 miles away from the city centre, with buses leaving from the city centre every few minutes. Do note that parking spaces in the zoo is limited but alternative parking can also be found in the vicinity.

Which tourist attraction in Edinburgh interests you the most? Let us know in the comments section below!