It’s no secret that the US is full of beautiful natural parks. There are dozens with amazing landscapes, unusual formations, and stunning views. But Yosemite National Park is special.

Winding rivers, granite cliffs, massive sequoias, and sweeping valleys work together to create scenes that are simply breathtaking. Yet, the park offers far more than just stunning views, as there are also countless species that can be observed. Bears, bighorn sheep, grey owls, trout, frogs, and many more can all be spotted in many locations.

However, the best way to enjoy all of that nature is by getting up close and personal – by pitching a tent in the great outdoors and getting in touch with one’s wild side.

So go ahead and read on to discover all of the essentials for your journey to Yosemite National Park.

The Different Campgrounds Within Yosemite Park

If you’re looking for an epic camping experience, then Yosemite National Park is definitely the place to go. Even just a few days is enough to take in unreal sights such as Tuolumne Meadows – a sweeping landscape with waving natural grasslands, a winding river, and a picture-perfect backdrop.

Best of all, there are 13 splendid campgrounds for visitors to set up camp in at Yosemite National Park. The following list gives a brief description of each, with the associated nightly costs.

Check into the Upper Pines campground to experience the essence of Yosemite National Park. The site, located in the heart of the valley, is surrounded by a wide variety of beautiful trees such as pines, firs, and cedars, as well as a gentle river.

Nonetheless, all of the modern necessities are present, such as a food storage locker, a picnic table, and a fire ring. Flush toilets and drinking water are also included.

Spend a couple nights in the lower pines campground to view some of central California’s finest nature. Splendid views of the granite cliffs linger just beyond the pine and cedar trees which surround the area. 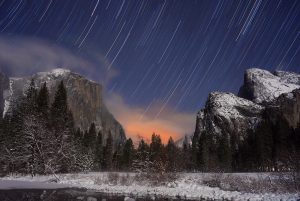 Like the Upper Pines, each campground is equipped with a fire pit, picnic table, and food storage locker. Flush toilets and drinking water are also included.

As shocking as it may sound, the North Pines campground is in fact surrounded by – yup, pines. Ponderosa pines, California black oaks, and white firs work together to create a cosy campground that is sure to keep visitors busy for more than a night.

Budget campers can mix and mingle with neighbours in the semipublic Camp 4 shared space. Six visitors are assigned to each site, in order to maximize space. However, the camp is known for being rowdier, and not a place for those looking to get a good night sleep.

Those looking for a mix of history and nature can spend a few days in the Wawona campsite. The area was once the headquarters of the national park but later refurbished into a recreational campground. Yet, Wawona is located at a moderate elevation of 4000 feet, making it one of the lower elevation sites. Furthermore, campers are just a short drive away from the beautiful Giant Sequoia trees. 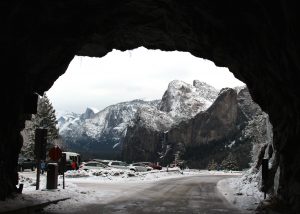 A heavy sleeping bag and blanket is a must for those looking to spend a night in Bridalveil Creek. The site is located at a whopping 7,200-foot elevation, making it one of the chilliest campsites in the park. However, the views are amazing, as visitors can peer out over a valley of junipers, red firs, and granite peaks. Best of all, Bridalveil offers facilities for those trekking the park by horse.

Peer out over scenic meadows and lush forests when you book a night in Hodgdon Meadow. Beautiful wildflowers cover high mountain plains just minutes away from the campground. 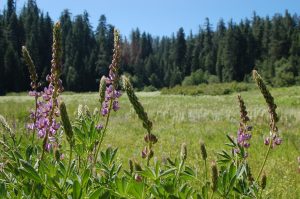 Crane Flat offers an easy and comfortable camping site to those who are novices in outdoor recreation. Though the elevation of the site is rather high at 6,200 feet, it has everything and more than a new camper would want. Aromatic pines and junipers surround the site, which also provides pleasant shade and scenic sunsets.

But what makes Crane Flat so appealing to new campers is its presence of a gas station and general store, which come in handy in case any goods were forgotten.

An authentic camping experience can be found at the Tamarack Flat site in Yosemite. The site isn’t for the faint of heart though, as it doesn’t offer running water or flush toilets.

Thus, visitors must boil water from the local streams or pack their own. Nonetheless, beautiful forests and boulders frequent the area, making the site plenty of fun for first-time campers.

Camping in White Wolf is a challenge that only a few may dare to enjoy. Due to its location being 8,000 feet above sea level, it receives quite cold weather. Nonetheless, those who are willing to brave the cold are rewarded with stunning views of nearby streams, waterfalls, and mountaintops.

Another rugged, yet majestic campground for tourists is the Yosemite Creek site. As the name suggests, the site is in fact located next to a winding creek.

The water from the source may be boiled for consumption, or used for other purposes. While the stream may be a bit too chilly to swim in, it makes for a superb backdrop worthy of any photographers attention. 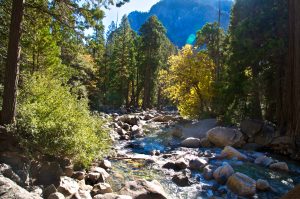 There’s no guarantee that campers will encounter wild porcupines at Porcupine Flat, but there is a guarantee that they will have a good time. Waling just a few minutes away from the campground will grant visitors unbelievable views of Yosemite’s famous Half Dome.

The highest elevation of any campground can be found at Tuolumne Meadows, which is situated at a striking 8,600 feet above sea level. However, beautiful sights can be seen in nearly every direction, as there are rivers, granite peaks, wildflower meadows, and forests as far as the eye can see. Visitors may also spend time in the nearby visitor centre, which provides an excellent history and overview of the park. 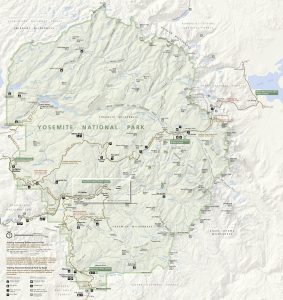 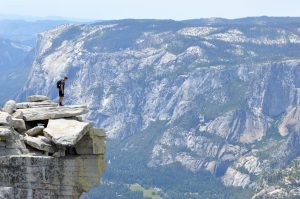 Yosemite National Park covers nearly 1,200 square miles of land, so it shouldn’t come as a surprise that the weather varies greatly. The lower valleys and plains experience fairly moderate temperatures, much like many of the other places in central California. Yet, the high meadows and plains in the elevated areas experience far colder temperatures, similar to a ski resort.

The summer months in Yosemite National Park are often quite hot and dry, due to the climate being similar to that of the Mediterranean. Tee shirts, shorts, and a light jacket are likely the best outfits to bring during the hot season.

Autumn very well may be the best time for visitors to experience Yosemite National Park, due to the moderate temperatures and lack of rainfall. With nothing more than a jacket, pants, and ball cap visitors can adventure into every corner of the park comfortably.

Though Yosemite National Park may have somewhat of a Mediterranean climate, it still manages to get fairly cold in the winter. The higher elevations accumulate a large amount of snow, and experience temperatures that regularly fall below freezing. Yet, the lower valleys still maintain a relatively bearable climate, where snow is rarer.

Spring weather in Yosemite National Park behaves very similarly to the autumn weather. Visitors touring the park in March will notice quite cold temperatures, whereas those visiting later in May will observe much more summery weather.

“Camp” In Comfort At The Yosemite Valley Lodge 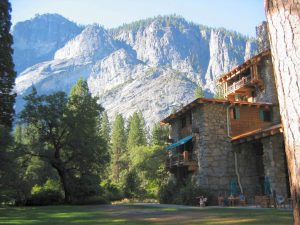 Okay, so maybe camping isn’t your thing. But that doesn’t mean that you can’t still enjoy the supreme scenery of Yosemite National Park. Thankfully, there are plenty of rooms available at Yosemite Valley Lodge.

The rustic-styled hotel is decorated with wood and glass architecture to make guests feel right at home with nature. But don’t be fooled, it also offers plenty of modern amenities such as WiFi, television, coffee machines, and much more.

Best of all, the location is just minutes away from Yosemite Falls. So if those camping plans fall through, then pack your bags and head to the lodge.

How Do I Get To Yosemite National Park?

The best way to get to Yosemite National Park is to take a flight into San Francisco International Airport. From there, visitors can take a car east on US-205 until arriving at the park. The total drive time is just over three hours.

“Feeding bears at the campground is a fun and exciting experience for all!” Said no one ever. 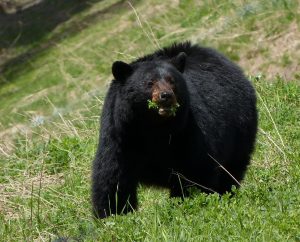 Asides from the incredibly obvious fact that feeding bears aren’t a good idea, there are also a few safety precautions campers should take.
For starters, every camper should bring a first aid kit. It may sound like something every worrisome grandma would say, but the reality is no one can ever predict when disaster might strike. So better be safe, than sorry.

Second off, it’s wildly important for campers to pack sealed containers in a storage unit such as a cooler. Bears, foxes, and coyotes all have an amazing sense of smell, which can help them sniff out goodies such as steaks and burgers. Don’t let those delicious ribeye steaks become an easy snack for the local wildlife!

Lastly, take a great precaution when creating fires in the campgrounds. California becomes a blazing inferno each summer due to an abundance of wildfires, and its excessively hot and dry weather. So put all fires out with a bucket of water and dirt – to ensure that the embers won’t ignite a ripping blaze.

Like most national parks, Yosemite National Park is open 24 hours a day, every single day of the year. Happy go lucky campers can pitch tents in rain, snow, or shine – as long as they can weather the elements. However, the entrance gates don’t follow the same rule, as they are only open during daylight hours during the winter.

Yosemite National Park charges visitors by vehicle, which amounts to $35 per car or truck, or $30 per motorcycle. So cram into that soccer-mom van, and bring all of your friends for a weekend of fun.