Cancun may be most known for its pristine white sand beaches and fancy resorts, but there is so much more to this coastal city of Mexico. Its exotic locale brimming with history gives you an abundance of ancient ruins to visit. Learn all about the bygone lives of the ancient past by visiting the Mayan ruins near Cancun.

You may know about Chichen Itza and Tulum, but there are more Mayan ruins to see than those famous ones. In fact, some of the lesser-known ruins are just as amazing and have far fewer crowds. Every single Mayan ruin has a different story to tell, and we’ve picked the very best for you to explore the next time you’re in Cancun. So, let’s take a road trip and see the many Mayan ruins in Cancun, Mexico. 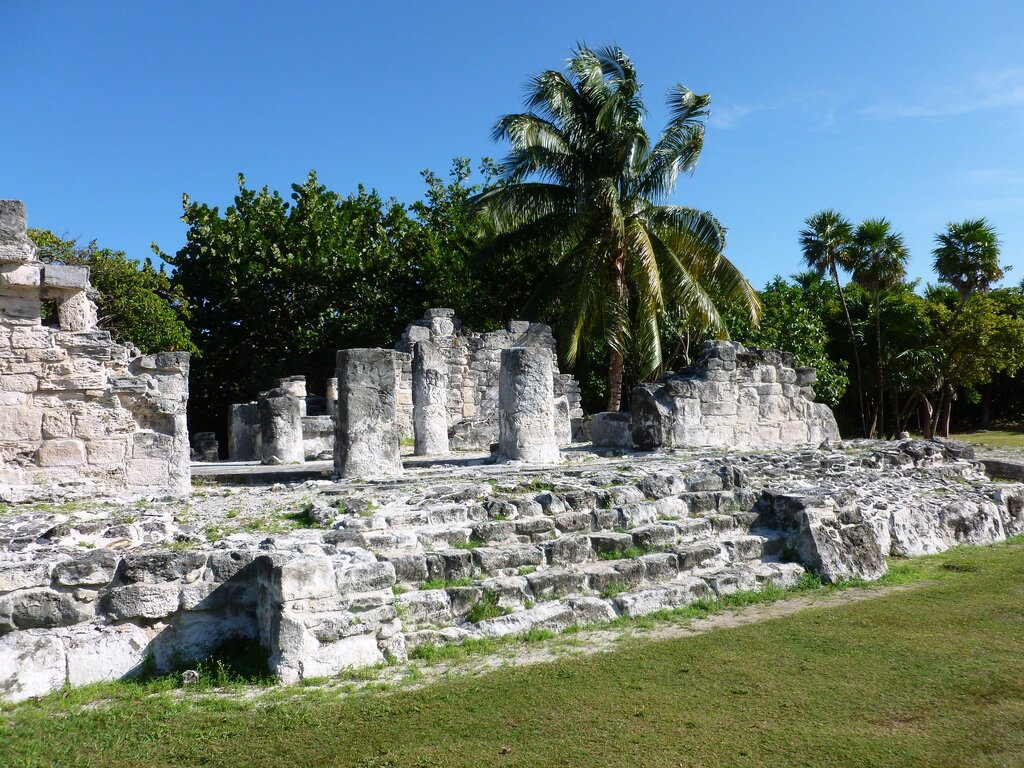 Located just within the Hotel Zone of Cancun, the ruins of El Rey may not have the grandeur of more famous ruins, but it still has many interesting things to explore. There may be few complete standing structures within this archeological site, but it is enshrouded by many indigenous plants and trees, creating a sense of natural wonder.

And because it is not as well known as others you get the chance for a more intimate exploration. You’ll also get to learn much more about Mayan ruins at the Cancun Mayan Museum nearby. After exploring the ruins, you can spend the rest of the day simply chilling at one of Cancun’s largest and yet most serene beaches, Playa Delfines. 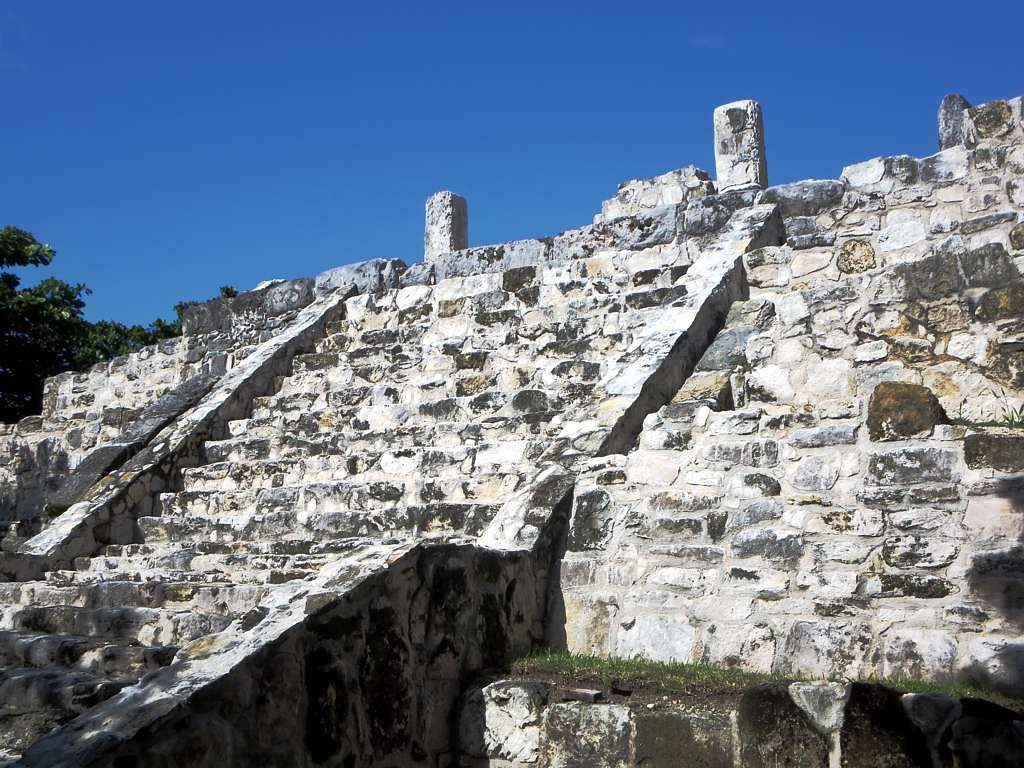 The San Miguelito ruins are located right on the grounds of the Cancun Mayan Museum. The best thing about visiting this Mayan ruins in Cancun is that you’ll get to learn more about the history of Mayans right before heading to the ruins. This site is divided into four complexes, each revealing a unique side of the ancient architecture and the past life of the Mayans.

At the heart of San Miguelito is the Chaak Palace Grouping. This complex is marked by the most iconic landmark in the site, the Chaak Palace, a magnificent 30-meter long edifice anchored by 17 columns. The North Complex features platforms and graves, suggesting its previous use as a residential area. Head over to the South Complex and you’ll see impressive structures including an 8-meter tall pyramid. Meanwhile, the Dragon Complex showcases faded murals and hieroglyphs depicting animals like birds and fish. 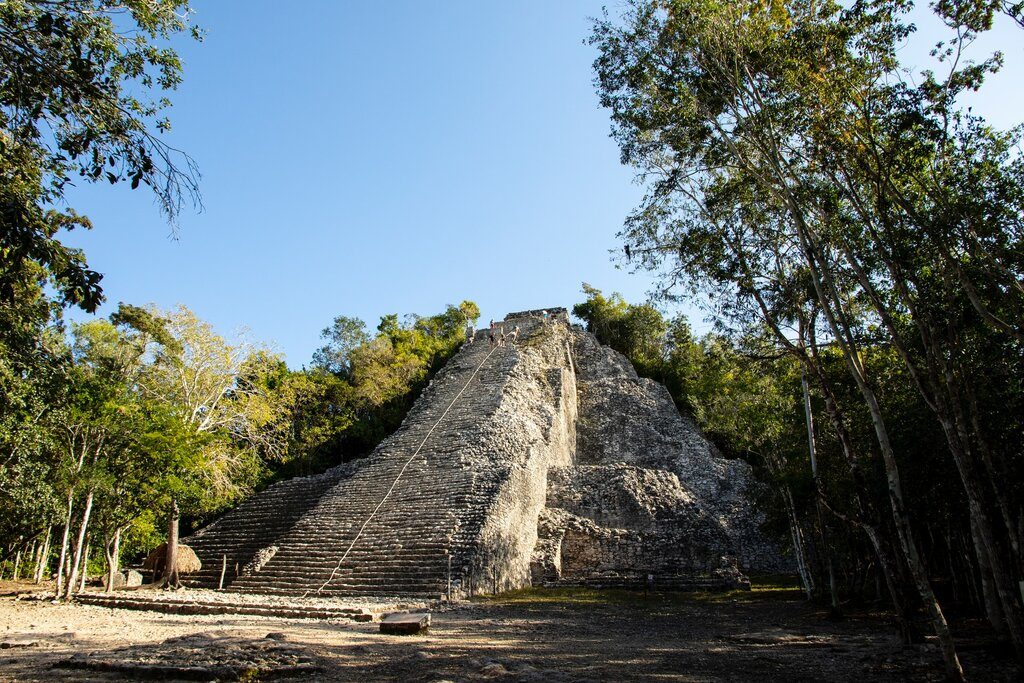 Photo by Robin Canfield on Unsplash

Coba ruins, also meaning ‘waters stirred by the wind’, is flanked by two lagoons. This famous Mayan ruins near Cancun is uniquely different from most in that it is not just one site, but rather a collection of sites that surround the main pyramid.

Reach for the sky by climbing 120 steps up Nohoch Mul pyramid, the tallest pyramid in the Yucatan at 137 feet tall. From the summit, you’ll get a wonderful bird’s eye view of the entire ruins laid right before you. Aside from the main pyramid, there are many other interesting structures to discover in this massive site. After hours of exploration, you’ll find it absolutely relaxing to take a dip in a nearby cenote. Cenote Tamcach-Ha, an underground cenote with two jumping platforms, is one of the best cenotes nearby. 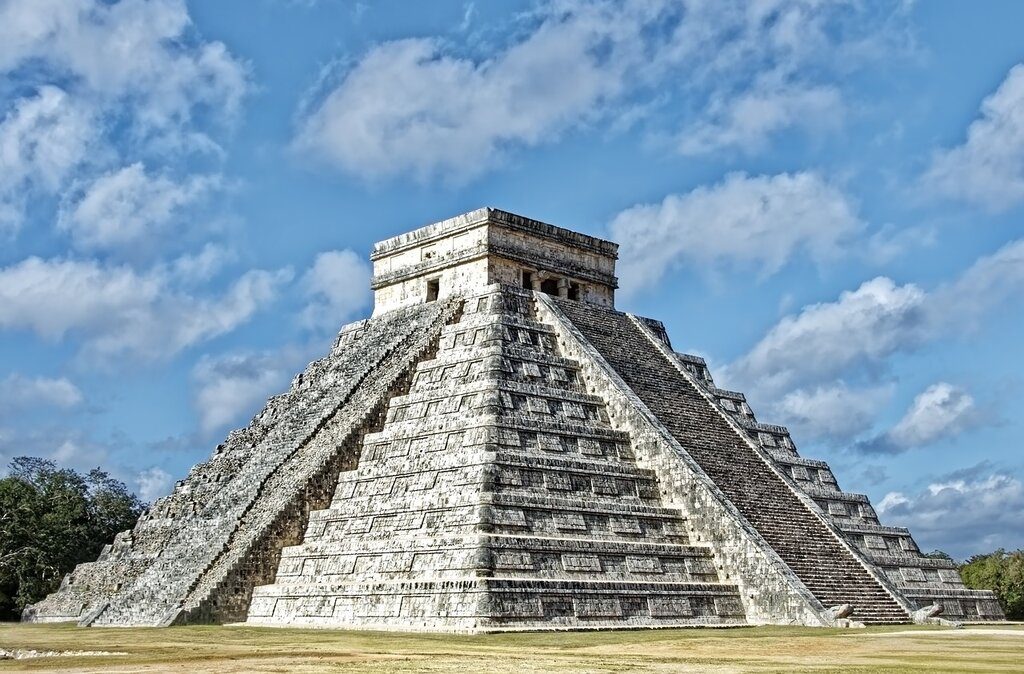 Photo by Makalu on Pixabay

One of the new seven wonders of the world, Chichen Itza is the most popular of all the Mayan ruins on our list. Like Coba, Chichen Itza is made up of many sprawling sites, and is the largest archeological site in Mexico. This UNESCO World Heritage site will most definitely give you a glimpse of a once almighty civilization with its gloriously restored edifices.

The first one you’ll encounter, and the most famous, is the El Castillo pyramid. However, climbing the El Castillo pyramid is prohibited. But the sheer grandeur and wonder you’ll get by walking in the footsteps of the mighty Mayan civilization will be enough. Just opposite the pyramid is the largest temple in the complex, the Temple of the Warriors. Also make sure not to miss the largest ball court in all Mayan ruins, the Grand Ball Court. And before heading for a swim in the nearby cenotes, pay a visit to the Sacred Cenote for a better understanding of how ancient Mayans viewed this natural wonder. 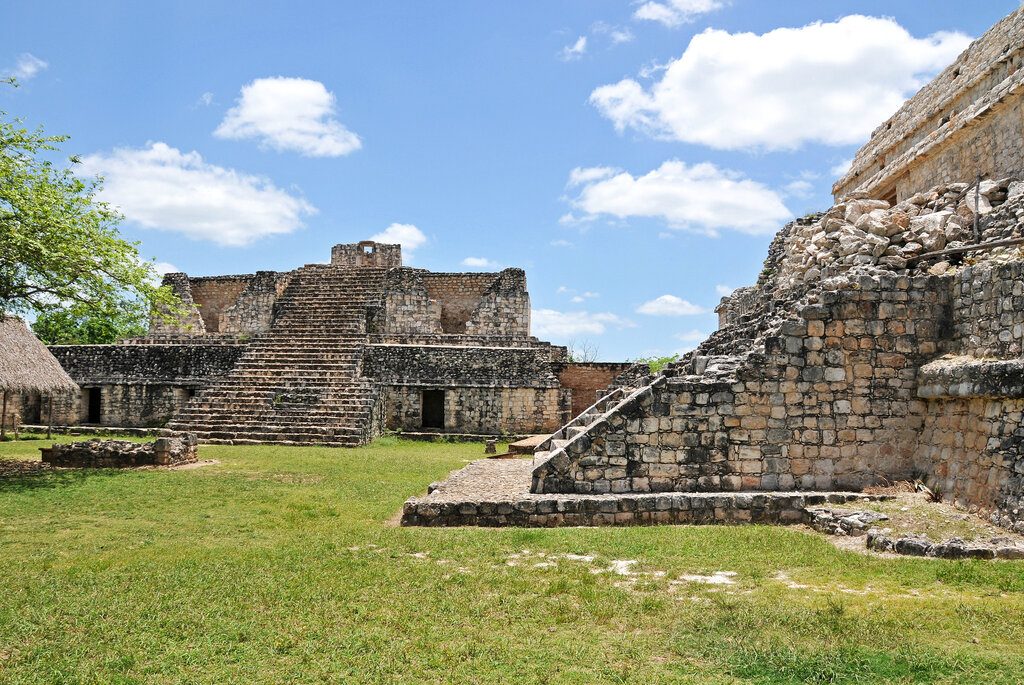 Ek Balam, also known as Black Jaguar, is a Mayan ruin near Chichen Itza. Once a mighty kingdom, you can witness the tomb of its ruler protected by a jaguar head structure. The tomb lies within the most spectacular pyramid, El Torre, at 100 feet tall. Another stunning edifice in the compound is the Oval Palace, which presents a unique round building with a temple at the summit. Unlike several of the other sites, the Ek Balam ruins can be climbed. From the top of El Torre, you can even gaze out into the temples of Chichen Itza and Coba on a clear day.

And just next to Ek Balam lies a splendid open-air cenote, the Cenote X’canche. After exploring the ruins, cool off with a soak in the emerald waters shimmering under the sunrays. 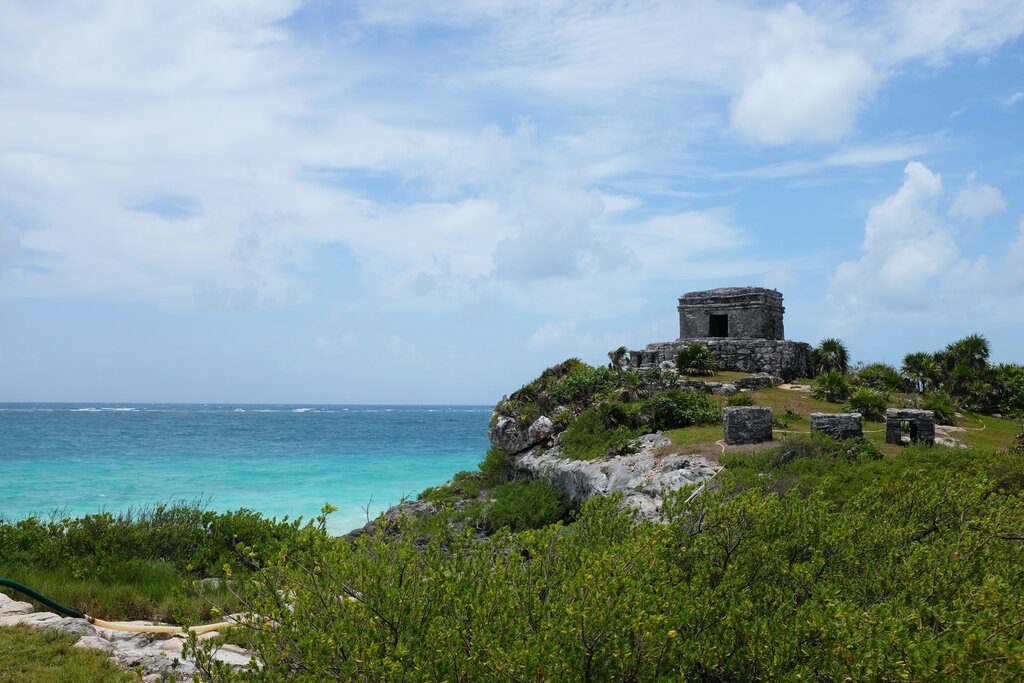 Photo by Kaan Kosemen on Unsplash

The ruins of Tulum are not as large as Chichen Itza but you’ll be rewarded with a much more dramatic view. Once called the walled city Tulum, this ancient fortress sits on a limestone cliff facing the sea. There are many enchanting structures, and the most well-preserved, The Temple of the Frescoes, even features a fully colored mural.

Are you feeling a little warm from the heat of the sun’s rays? Then you can always take a dive into the crystal blue waters behind the site. Yes, there is even a public beach right below the ruins. Swimming in the sparkling turquoise waters with the towering ruins above you is definitely an experience you’ll never forget. 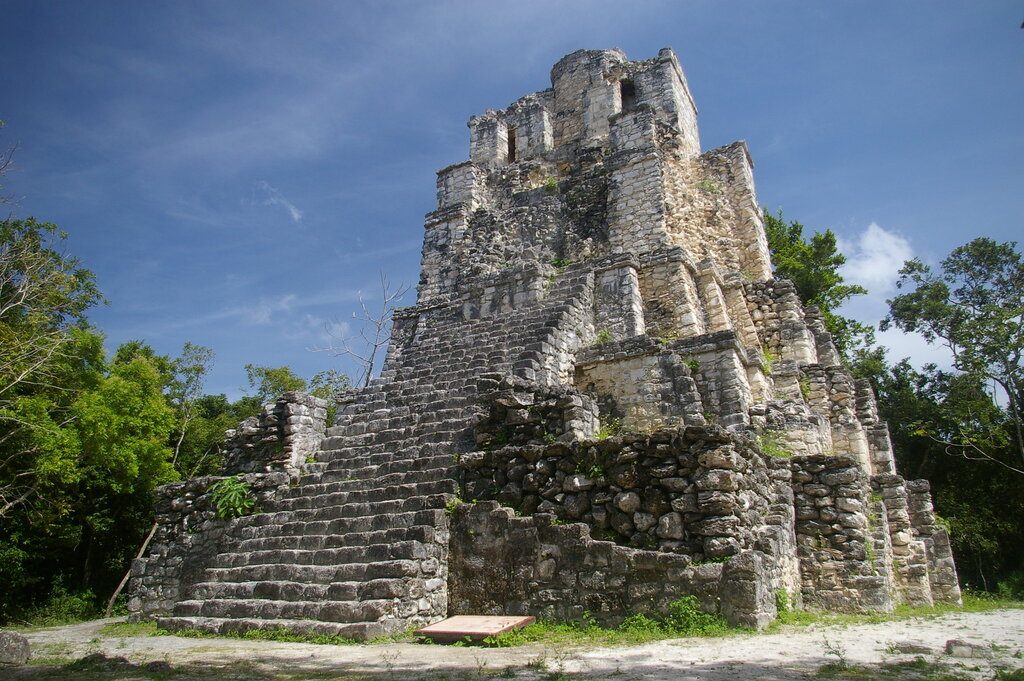 Also known as Chanyaxche, Muyil ruins is situated in the Biosphere Reserve of Sian Ka’an, 1.5 hours away from Cancun. The breathtaking Castillo, a five-tiered pyramid at 57 feet tall, is the highest pyramid in Riveria Maya. And while it may seem like a typical Mayan ruin nestled deep in the jungle, walk straight down and you’ll be greeted with a view of the brilliant blue Muyil lagoon.

It is less well-known than the nearby Tulum ruins, which is ideal if you’re looking for a ruin near the beach without a crowd. Complete this Mayan ruin day trip with a dip in the surrounding turquoise channels leading to the lagoon. 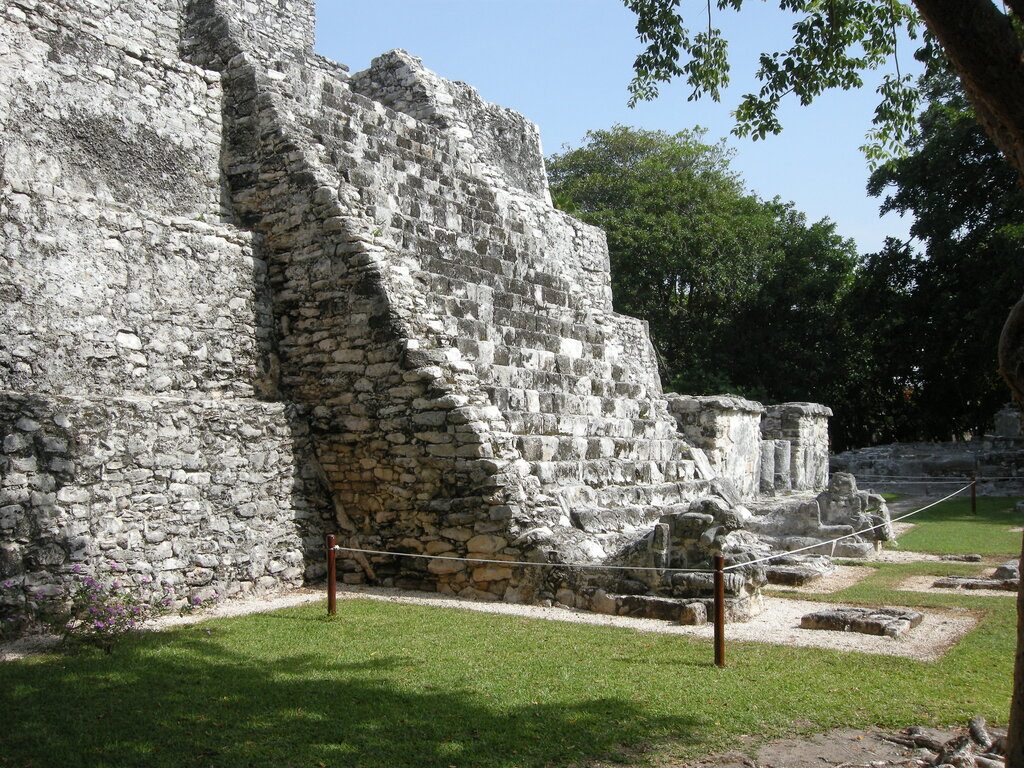 If you want to stay in the confines of Cancun but still want to check out some Mayan ruins then head over to the small site called El Meco. Despite being right at the busy Hotel Zone, you’ll feel like you’re in another world at this site. Surrounded by the green jungle and many resting iguanas, let your heart be at peace in this tiny but charming ruin.

El Meco is located just 5 km north of Cancun, making it a great place to pop by for a short visit before heading for the beaches. Its structures are heavily influenced by Chichen Itza, particularly evident in its largest edifice, the El Castillo. Right at the foot of the stairs of El Castillo are two large serpent heads, reminiscent of the Castillo in Chichen Itza. 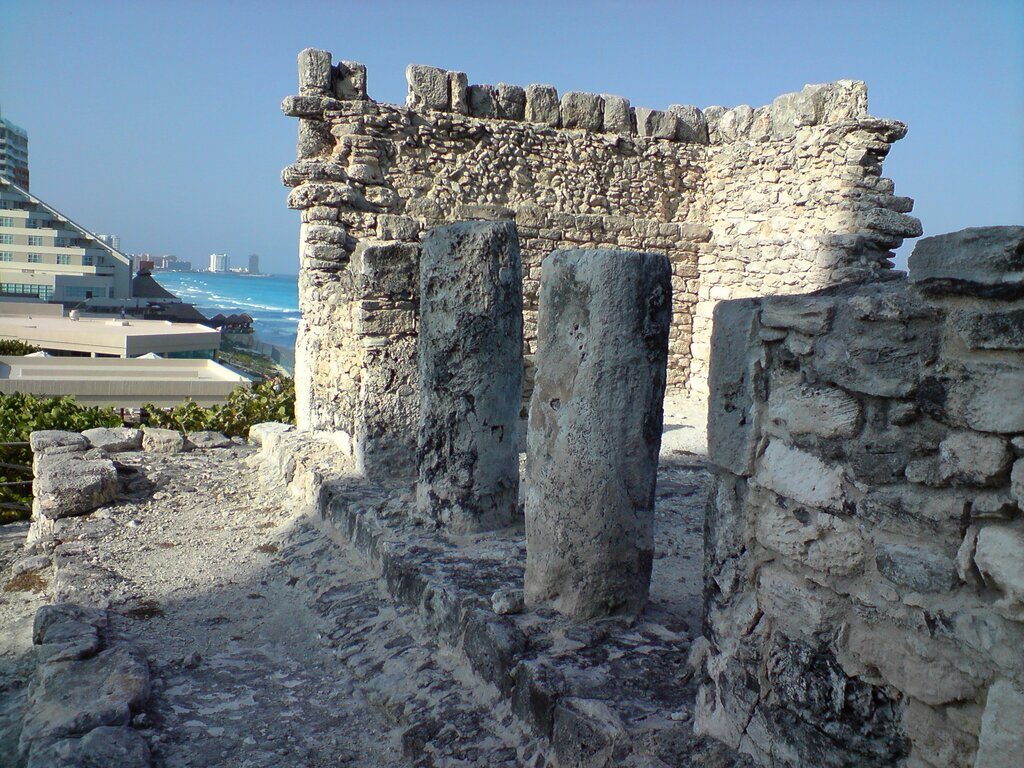 Photo by Mauro I. Barea G. on Wikimedia Commons

Yamil Lu’um is actually within walking distance from two hotels, the Park Royal Cancun Resort and Westin Lagunamar Ocean Resort. It may be the smallest of the Mayan ruins in Cancun, but its size does little to taint its beauty. Located at the highest point in Cancun, the ruins overlook the glittering oceans.

There are just two temples structures in this archeological site, but they offer an intriguing juxtaposition against the modern buildings around. Just by entering the compound, you’ll be captivated by the charming remnants of the past, a poignant reminder of how once life was for the Mayans. 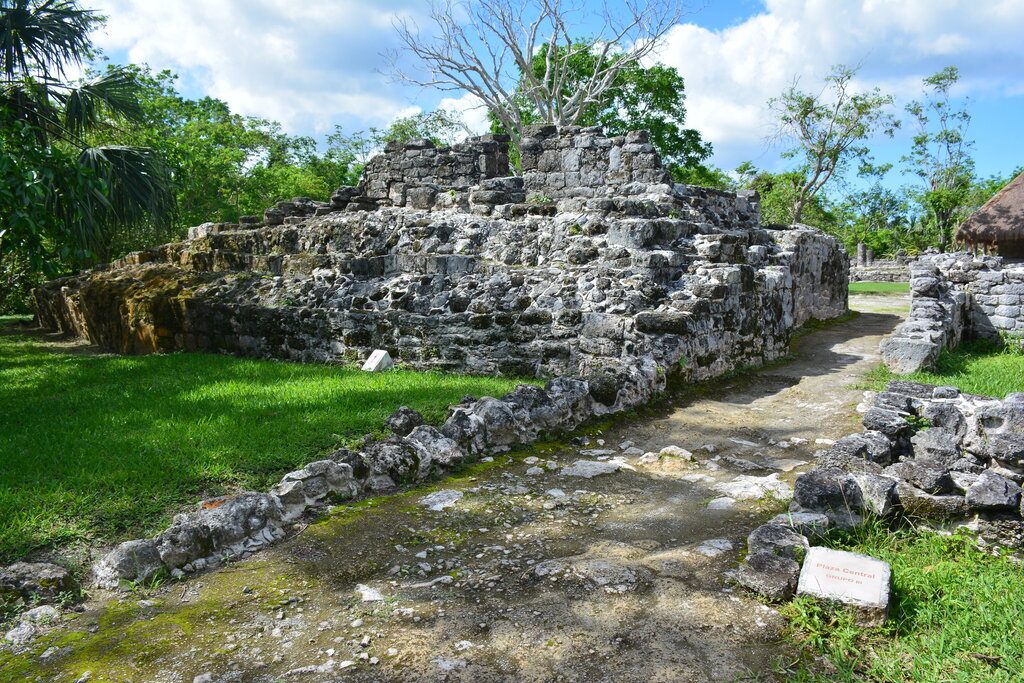 The ruins of San Gervasio is the jewel of Cozumel island. What sets it apart from other Mayan ruins near Cancun is that it was a ceremonial center, rather than a city. Dedicated to the Mayan goddess Ixchel, many women used make a pilgrimage to this holy island to pray for fertility.

Most of the buildings at San Gervasio are unrestored, so you can admire them at their natural state. You’ll see a plethora of temples and altars on this lush island, but the most thought-provoking is undoubtedly the Las Manitas. Las Manitas, translated to “The Little Hands, has imprints of small little red hands on its inner walls. 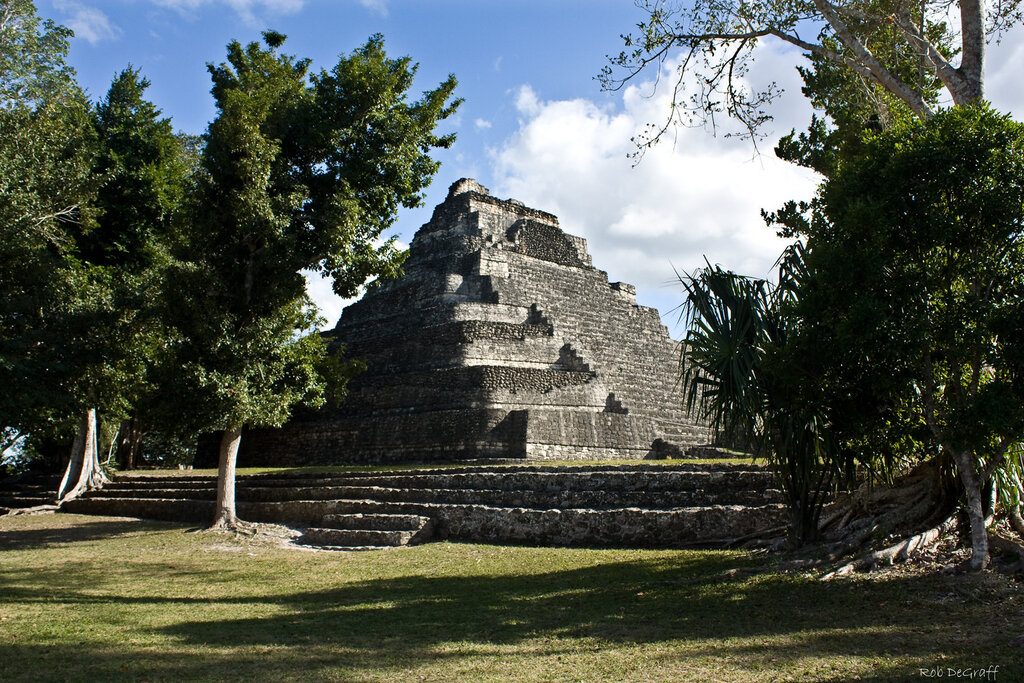 The ruins of Chaccohoben are located in the south of Cancun, in the Lake Region of southern Quintana Roo. The indigenous vegetation and wildlife surrounding the site are particularly lush and vibrant, highlighting the deep bond between the ancient Mayans and nature. At this ruin, you’ll get to enjoy the unspoiled jungle as much as the actual ruins itself, through the sounds and colors of nature all around you.

Just like San Gervasio, Chaccohoben was a ceremonial center that held many rituals, including human sacrifices. There are three main pyramids and many more enchanting temples and buildings to explore within. As Chaccohoben is near the Costa Maya port, many tourists flock to this site by cruise. So it’s best to visit this Mayan ruin early in the morning before the afternoon crowd floods in. 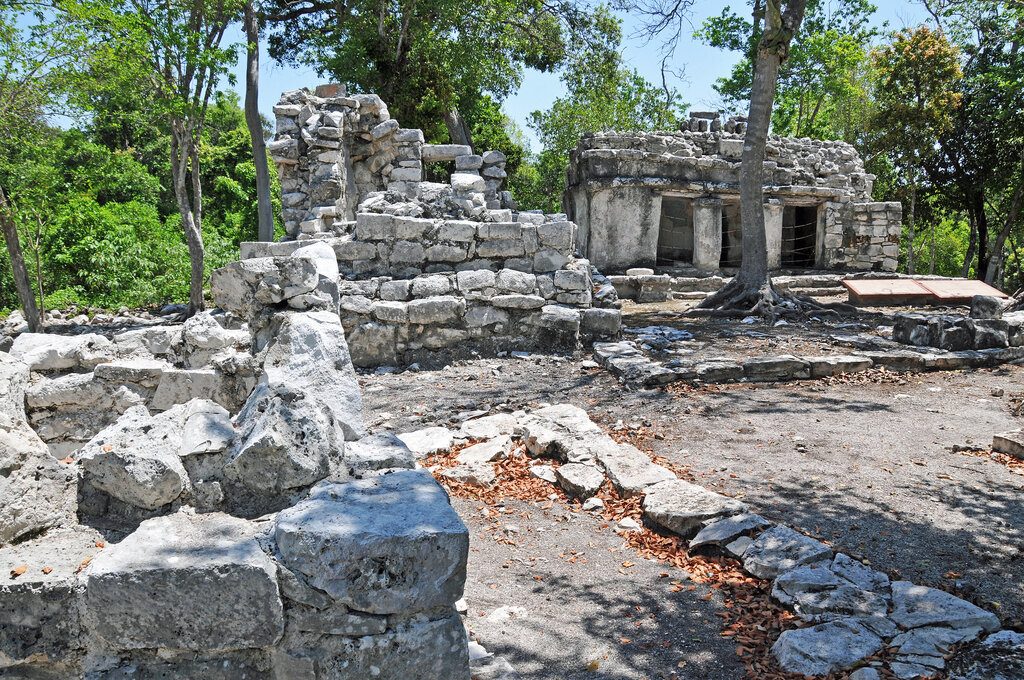 Not to be mistaken with the nearby water park of the same name, Xel-Ha ruins sits along the Maya Riveria, near the Tulum ruins. Most of the structures in this relatively small site are unrestored, but it does have are some excellent examples of Mayan murals, with some even retaining their colors till today. The color blue is peppered throughout most of their murals, as this color was considered a sacred color to the Mayan.

Apart from the colored murals, you’ll find several small stone temples and even two cenotes in the area. The larger cenote found at the west of the ruins is particularly lovely, surrounded by fascinating structure around it.

Tips On Viewing the Mayan Ruins in Cancun

It always helps when someone gives you some great advice for your vacation. So we’ve compiled a few great tips for any of you that decide to take a little jaunt out to some of these Mayan ruins.

Hopefully, these tips will help you have an amazing trip to those spectacular Mayan ruins and temples, especially if you have dreamed of seeing them forever.

Get the Most Epic Adventure Exploring Mayan Ruins in Cancun

No matter which ruins you get to see, one thing is for sure: you will have pictures that seal this magnificent adventure into your memory forever. Staying just in the confines of the party city of Cancun can be fun. But you’ll want some variety on your trip.

And what better way to get it than to explore the history of the land you’re in? So, when in Cancun make sure to take a day or two (or three if you really are into history) and take a little drive out to these magical Mayan ruins. Climb a temple and see what it feels like to stand on top of the world.

Are you hungry after a day of exploring historical ruins? Check out the best restaurants in Cancun and have a taste of the best food they offer! 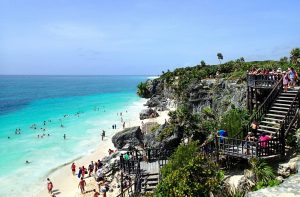 5 Ways to Get from Cancun to Tulum
Plan Your Trip 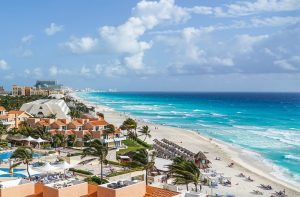 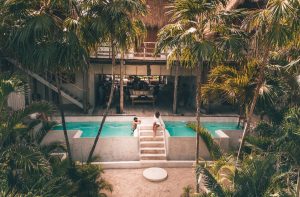 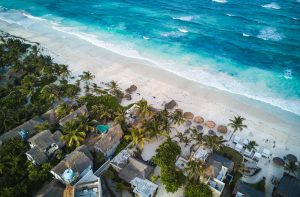 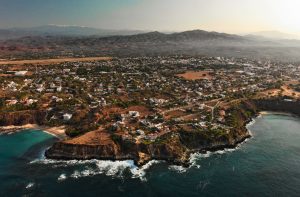 Sierra Gorda: A Guide to the Mexican Biosphere Reserve