Honolulu is located on the Polynesian island of Oahu. It is Hawaii’s biggest city as well as its capital. It is the perfect mix of nature, culture, sports, and shopping. Honolulu means “sheltered bay”, and it showcases some of the most gorgeous beaches. For this reason alone, tourists visit the state for a much-needed R&R. From scenic beaches to interesting museums and historical monuments, Honolulu has so much to offer.

Hawaii is made up of around 137 islands in the Pacific Ocean, with four main islands — Maui, the Big Island, Kaui, and Honolulu. When you are traveling to Honolulu, combine the trip with another island visit. To cover most of Hawaii, plan a Honolulu and the Big Island trip together as there are a number of unique things to do in the Big Island.

Now, let’s start our journey into the island’s best attractions. The following is a list of amazing things to do in Honolulu, Oahu.

Visit Pearl Harbor and the USS Arizona Memorial in Honolulu 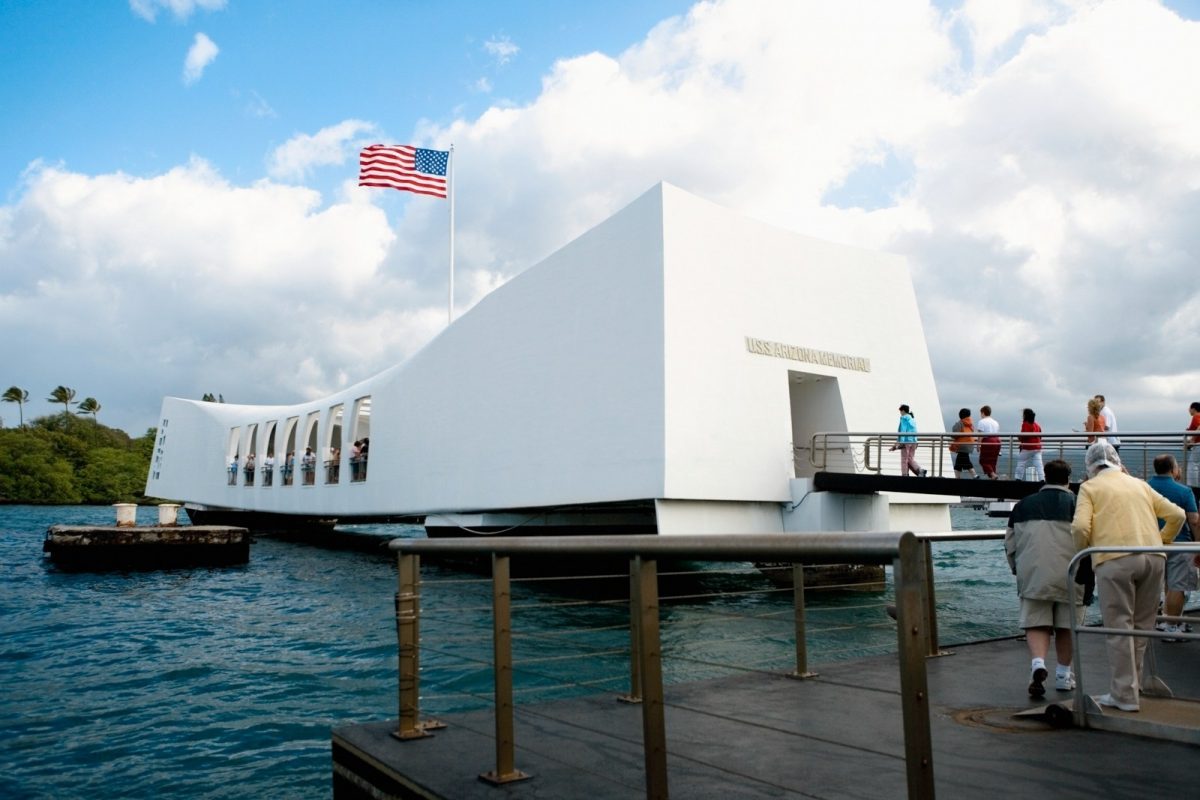 Pearl Harbor and the USS Arizona Memorial top all tourist attractions in Honolulu, Hawaii. In fact, it draws more than 1,500,000 visitors every year. After the addition of the Battleship Missouri and the opening of the USS Missouri memorial in 1999, this site has become an even more important attraction. Because of this, Oahu is often called Pearl Harbor Island.

A visit to Pearl Harbor in Honolulu is a sobering experience. Even those who were not born during the attack can appreciate and learn more about its history with a simple visit. Pearl Harbor tickets and reservations are available online at www.recreation.gov. You can book an individual or a group ticket for a free 75-minute tour at the USS Arizona Memorial.

Pearl Harbor is the largest natural harbor in Hawaii. It is both an active military base and a national historic landmark. Take time to see the galleries, “Road to war” and “Attack”, to explore personal memorabilia, photographs, and battle artifacts. The Pearl Harbor Visitor Center has a spacious bookstore, many interesting exhibits, and a beautiful waterfront promenade. 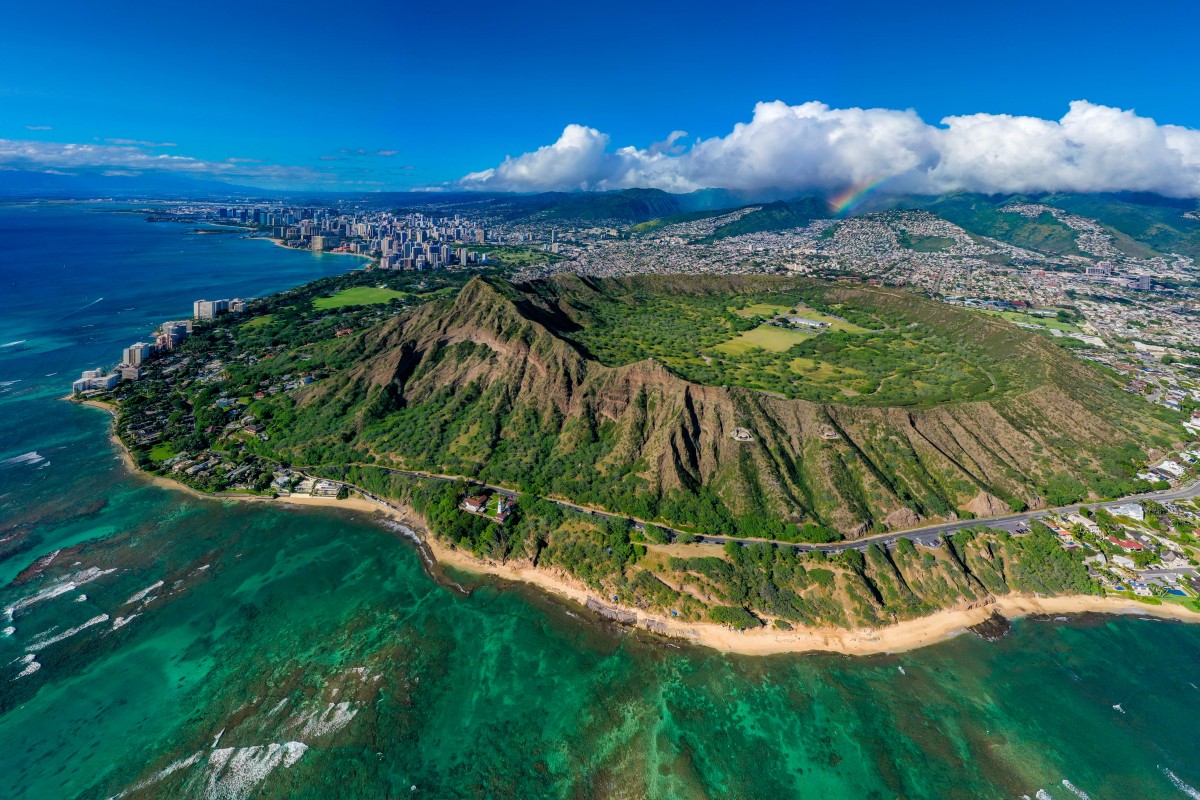 Hike up to the Diamond Head which overlooks the neighborhood of Waikiki. Locals call its crater Lēʻahi, and it is a reminder of Hawaii’s explosive beginnings. Honolulu’s Diamond Head got its name when British seamen saw calcite crystals sparkling in the sunshine and thought them to be diamonds.

Explore the historical buildings of Honolulu 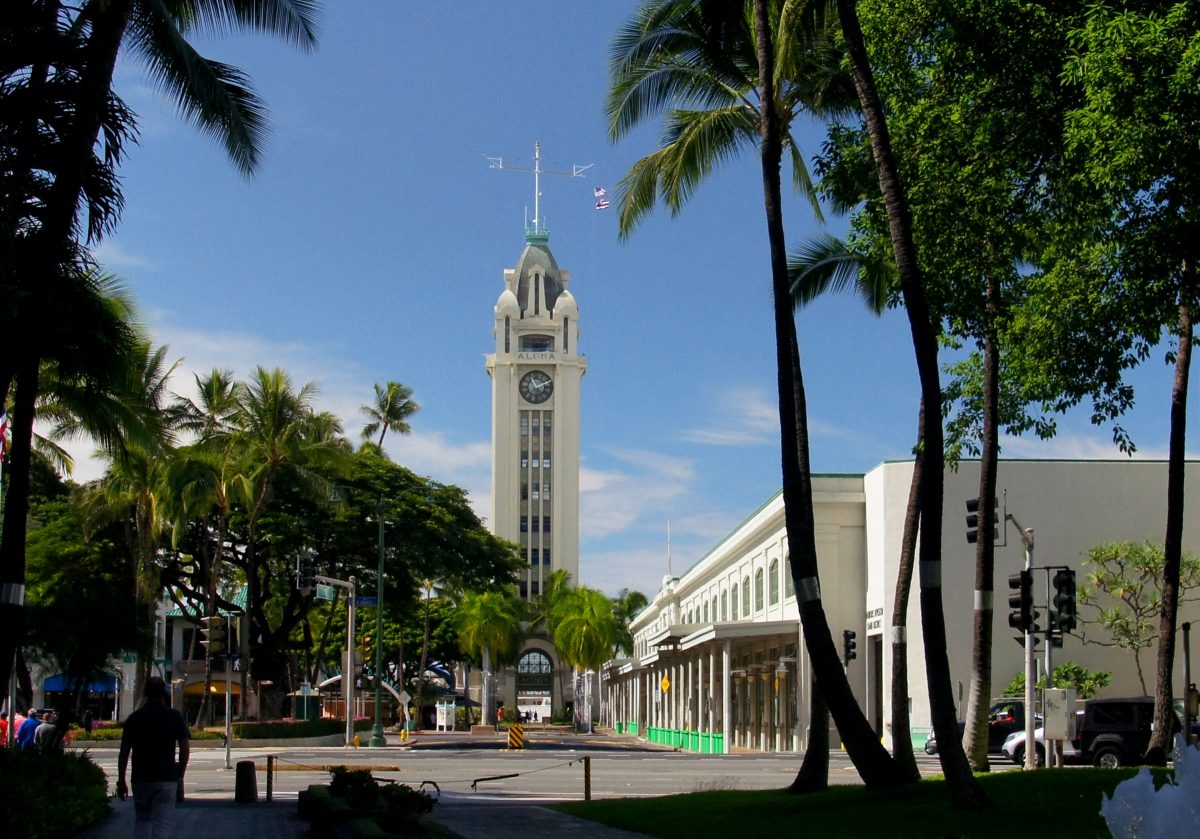 The historic side of Honolulu is a must-visit.  America’s only royal palace, Iolani Palace, is home to Hawaii’s last monarchs.

Other important buildings in Honolulu include Kawaiaha’o Church (the first church in Hawaii), the Hawaii State Capitol, the Mission House Museum, and the Prince Kuhio Federal Building.  Don’t miss the Statue of the Kamehameha I, the great warrior king who unified the Hawaiian Islands in the late 18th century. Go on top of the famous Aloha Tower and witness how this land has become a modern urban center. Iolani Palace and the Mission House Museum are free. However, they charge for guided tours to the inside of these buildings. 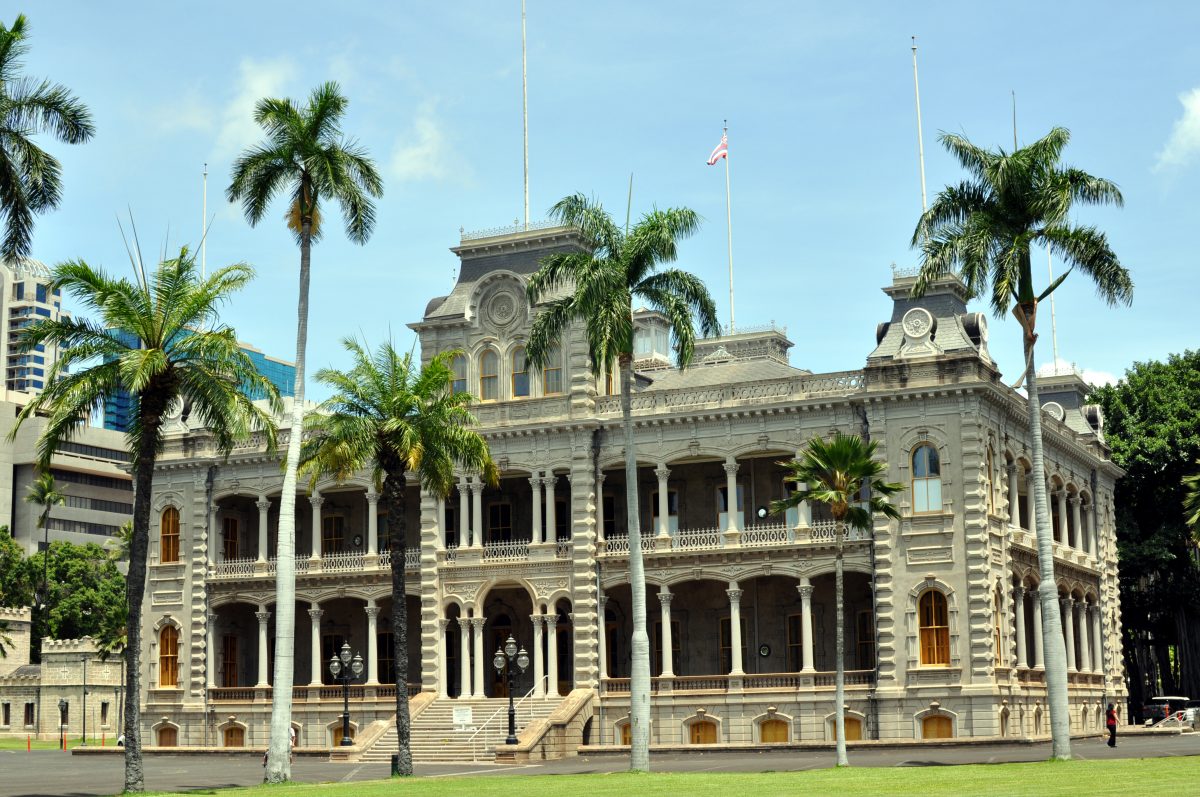 Iolani Palace is the family home of the respected Kalakaua Dynasty. It is located in downtown Honolulu. A stark contrast to the surrounding modern buildings, this 19th-century palace gives out a Francophone-cum-Italianate charm from its beautiful terraces.

The palace was built by the monarch David Kalakaua in 1879.  Kalakaua gained his inspiration from Europe, Asia, and Africa to build this charming palace. However, Honolulu’s Iolani palace later became the spot where American troops first raised the stars and stripes when they took over the island. Now, you can see the personal collections of King Kalakaua and Queen Liliuokalani inside. Moreover, several military artifacts are also on display, and regular performances of the Royal Hawaiian Band at the Exhibitions take place within. 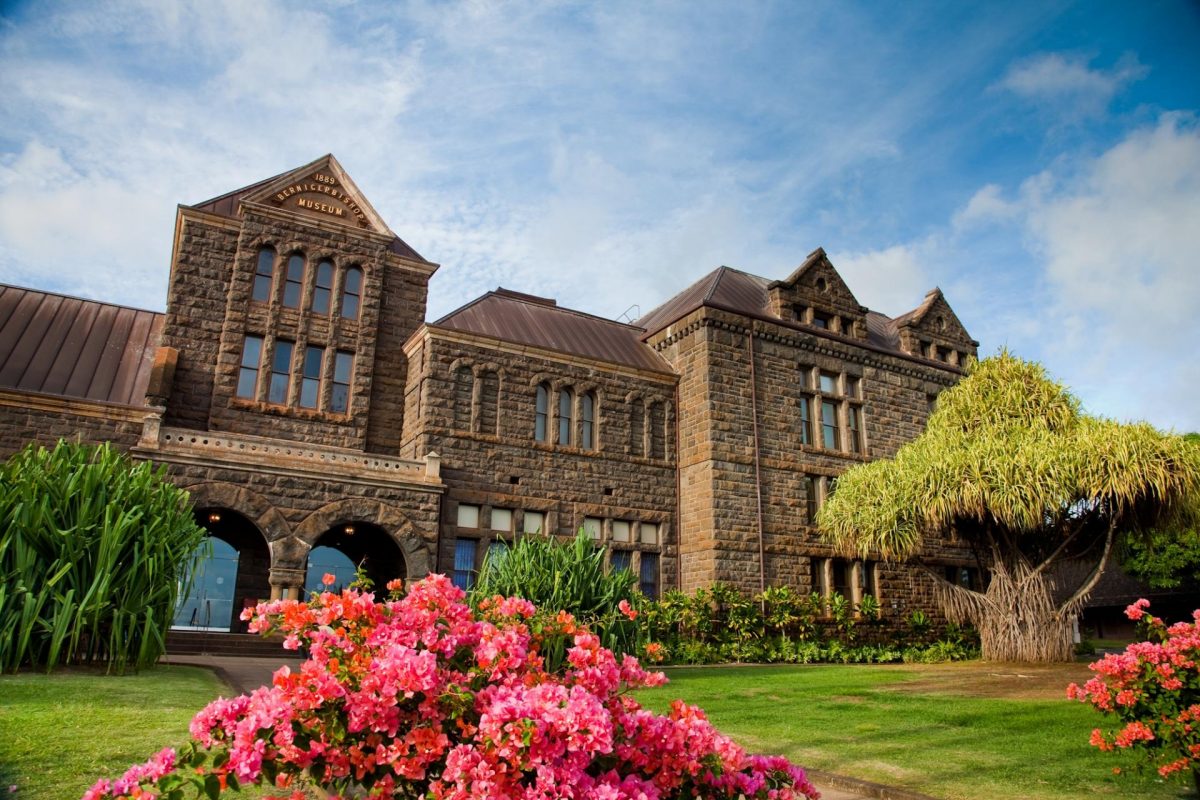 Visit the Bishop Museum which is the state museum of natural and cultural history. The museum in Honolulu was named after Bernice Pauahi Bishop. Her husband, Charles Bishop, founded the museum to preserve Hawaii’s cultural heritage. The Bishop Museum is the largest museum in the state of Hawaii. It has the most extensive collection of Polynesian cultural and scientific artifacts in the world.

Learn about the Polynesian voyagers who came to these islands long before Captain Cook dropped his anchor in 1778. The Bishop Museum has always been committed to gathering and educating people about Hawaii and the Pacific. Keep an eye on Bishop Museum events to grab a seat in one of their culturally enriching shows. 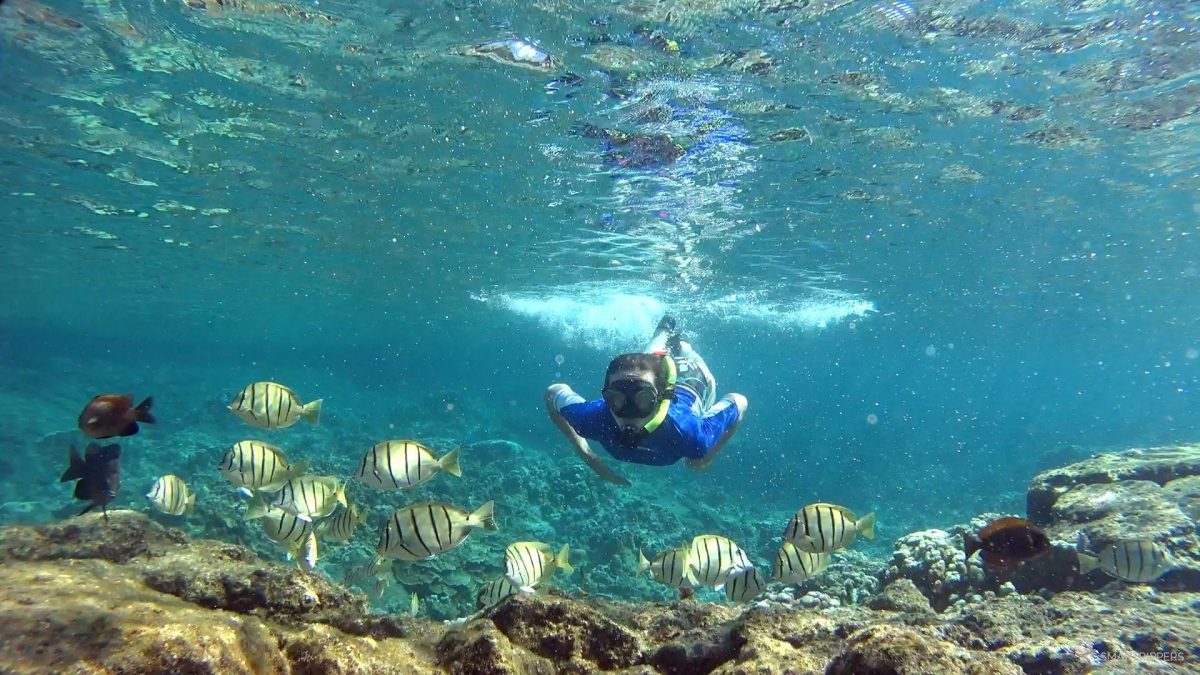 Hanauma Bay is the most famous spot for snorkeling on the island. Thousands of years ago, Hanauma Bay was a large volcanic caldera. It was always flooded and affected by centuries of wave erosion. Consequently, that turned Hanauma into one of the most visited tourist snorkeling attractions.

The clear blue waters and gorgeous reefs are home to thousands of tropical fish and green sea turtles. Hanauma Bay is both a nature preserve and a maritime life conservation district. In the Hanauma Bay nature preserve, visitors are required by law to refrain from having any contact with the corals or mistreating any marine animal.

There are admission and parking fees. Children aged 12 and below, people in the military, and local residents with ID can enter for free. On the other hand, tourists have to pay $7.50 for the entry fee. Moreover, the parking fee is only $1. If you book for the Oahu Snorkeling tour for $25, you do not have to pay for the entrance fee. Activities and services included are roundtrip Waikiki transport, snorkeling gear, and a guided tour to Hanauma Bay. 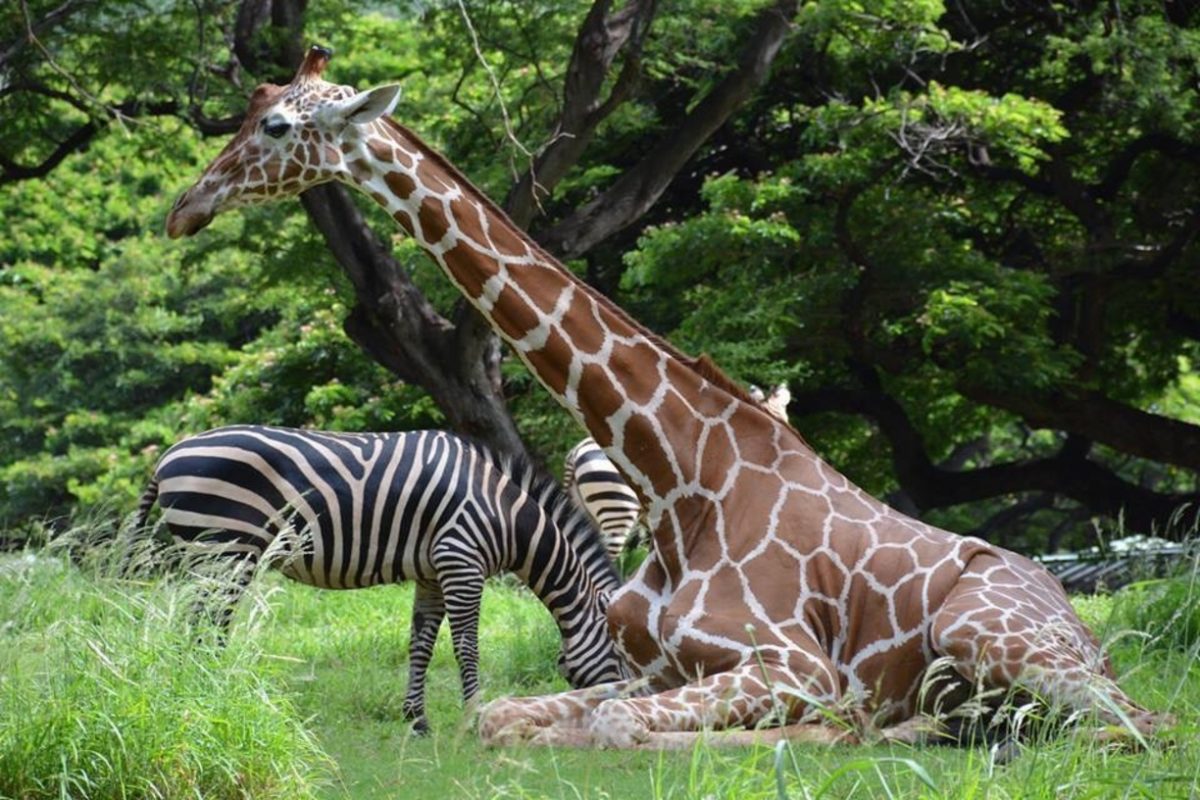 Located in Kapi’olani Park on the east end of Waikiki, the Honolulu zoo is a wonderful treat. Don’t miss the ancient banyan trees at the Kapi’olani park before heading to the zoo. The Honolulu zoo is always going through constant change and modernization. Since its opening in 1900, a number of exhibits have been redesigned to provide a more natural setting for the animals. Kapi’olani Park also has a beautiful beachfront for a family outing.

Right next to the reef on the Waikiki shoreline, the famous Honolulu Aquarium offers activities and exhibits. The facility also has research that focuses on the aquatic life of Hawaii as well as the tropical Pacific. The Waikiki Aquarium was designated a Coastal Ecosystem Learning Center of the Coastal America Partnership federal program. Now, you can see over 3000 marine life on exhibit, representing over 500 species of aquatic plants and animals in the aquarium.

Swim with sharks in the Pacific

If you want something different and exciting, shark diving is a must on your list of things to do in Honolulu. The trip begins on the northern coast which is where these scary predators reside. Divers enter into a secure steel cage and then it is lowered into the water. Though you are inside the cage, you can clearly watch everything from grey reef sharks to hammerheads. You can also spot the rare green sea turtles, exotic marine flora, and even giant humpback whales! 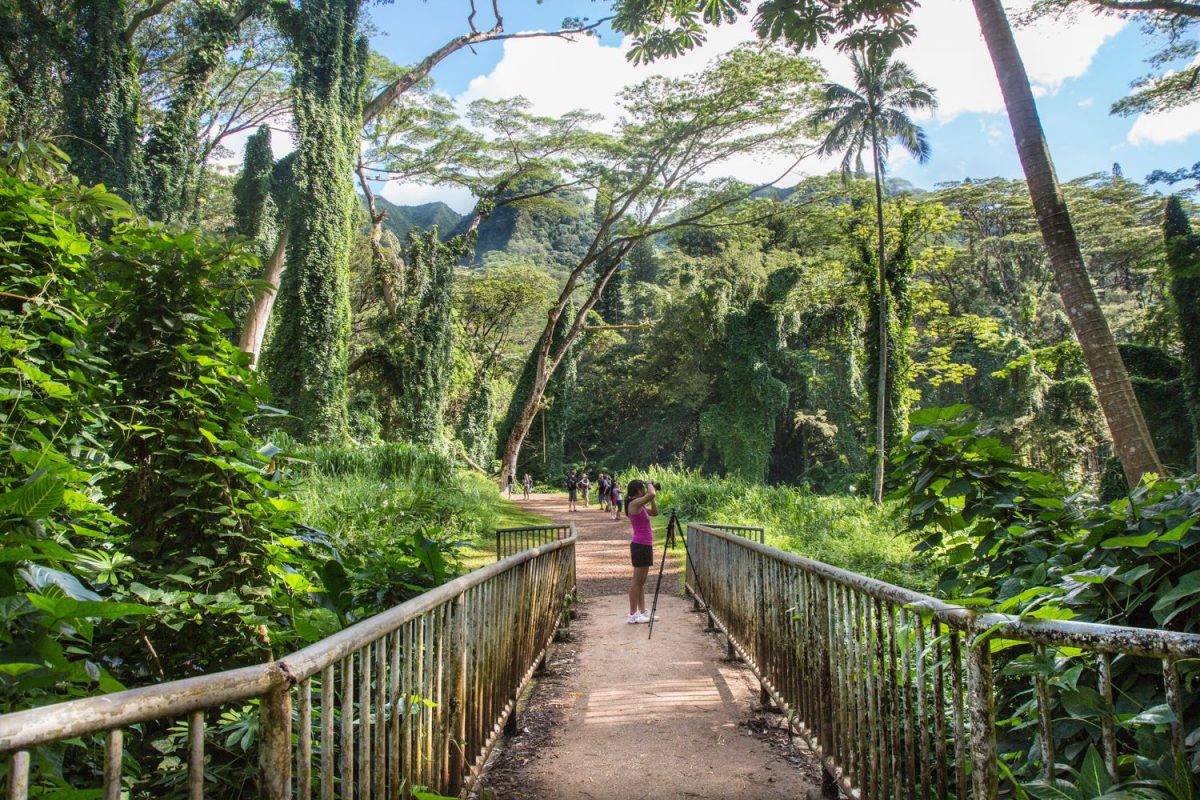 If you are planning to stay in Honolulu and Waikiki, take a day trip to the Manoa Valley. It is found on the other side of the H1 Freeway, just a short drive from Waikiki.

Manoa Valley is a residential area in Honolulu. However, it has some great attractions that draw tourists all year round. The University of Hawaii’s main campus is located within the valley. The lovely campus and the book store are worth a visit.

Drive through the fairly crowded area, lying between the university and the back of the valley. You’ll then find yourself in three of the most important attractions in the valley — the Chinese Cemetery, the Lyon Arboretum, and the trailhead to the Manoa Valley hike. Nature lovers will get a nice treat during the hike through the Manoa falls trails. Take selfies at the filming locations of Jurassic Park and the TV series LOST. 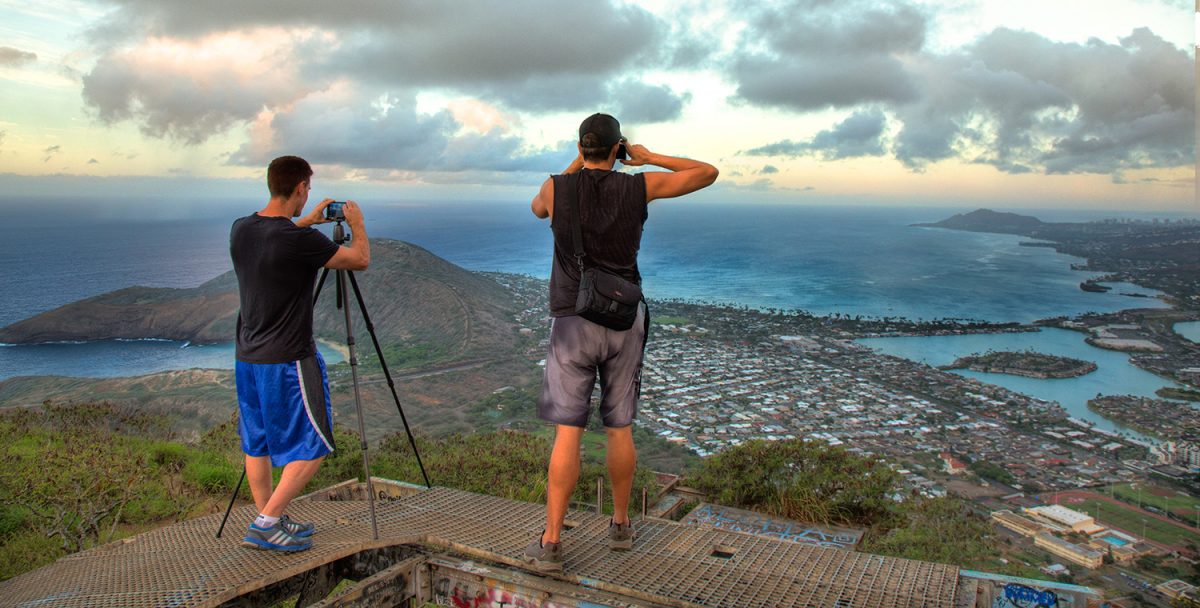 The southern area of Honolulu is the place where the trailheads of the Koko Crater begin. From there, hike up to the volcanic foothills of the Ko’olau mountains and above the waters of charming Hanauma Bay. Take a walk along the streets of Portlock, a nature reserve that is home to spiked cacti. Walk along the sun-baked paths to get a glimpse at the backcountry of Honolulu. The trail follows abandoned train tracks climbing up to the mountain ridges between the scrublands and rocks. The trail then leads to the 360-degree view of the southeastern coast of Oahu. On a clear day, you can also see the sheer-cut cliffs of Molokai Island in the distance.

Go under the sea at the USS Bowfin Submarine Museum 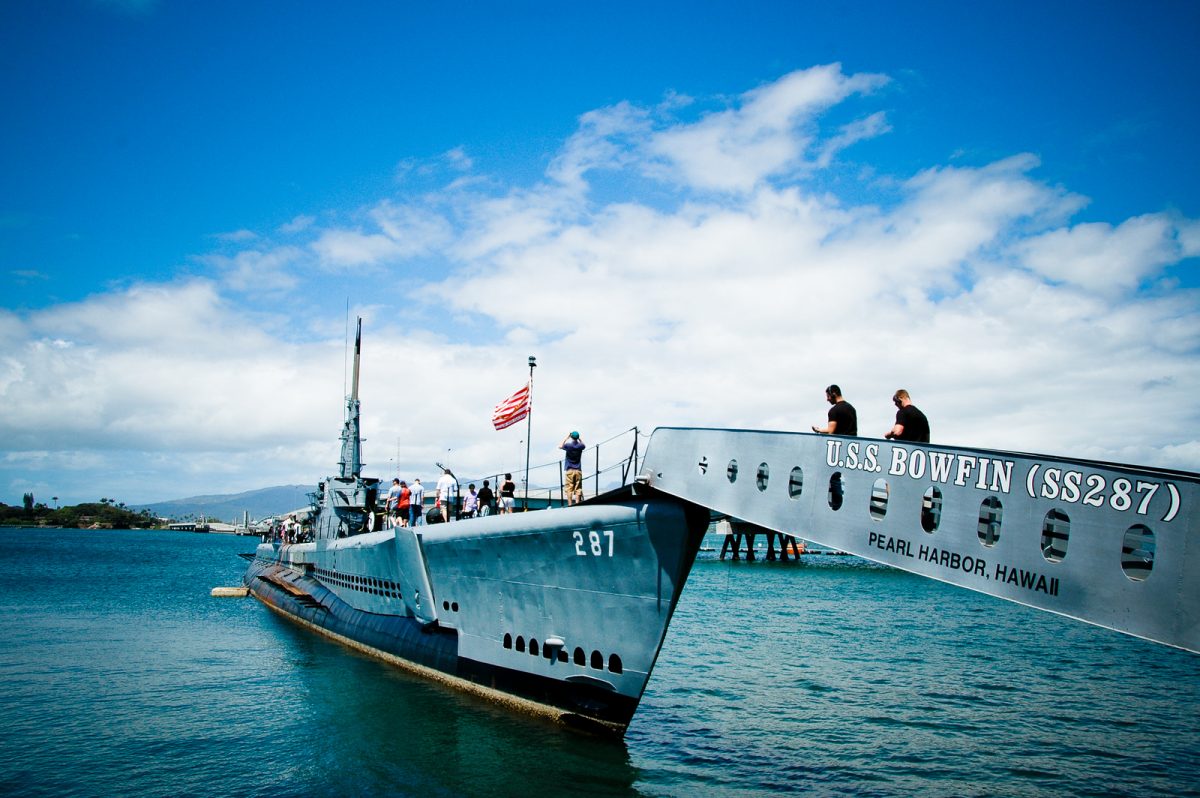 The USS Bowfin Submarine Museum & Park provides a glimpse of a US seaman’s life during World War II and the Korean War. You can take a look at pictures of all those years of struggle in this beautiful immersive museum. Walk through the corridors and the mess rooms, onboard living quarters, and control rooms. Take the recorded audio guide to explore the place up close.

Take a peek at the weapons used during the wars. It is definitely one of the most interesting sections in the collection. You can also find the infamous manned Japanese Kaiten torpedo here.  Moreover, you can catch the memorial of all those brave American submariners who sacrificed their lives in the Second World War. 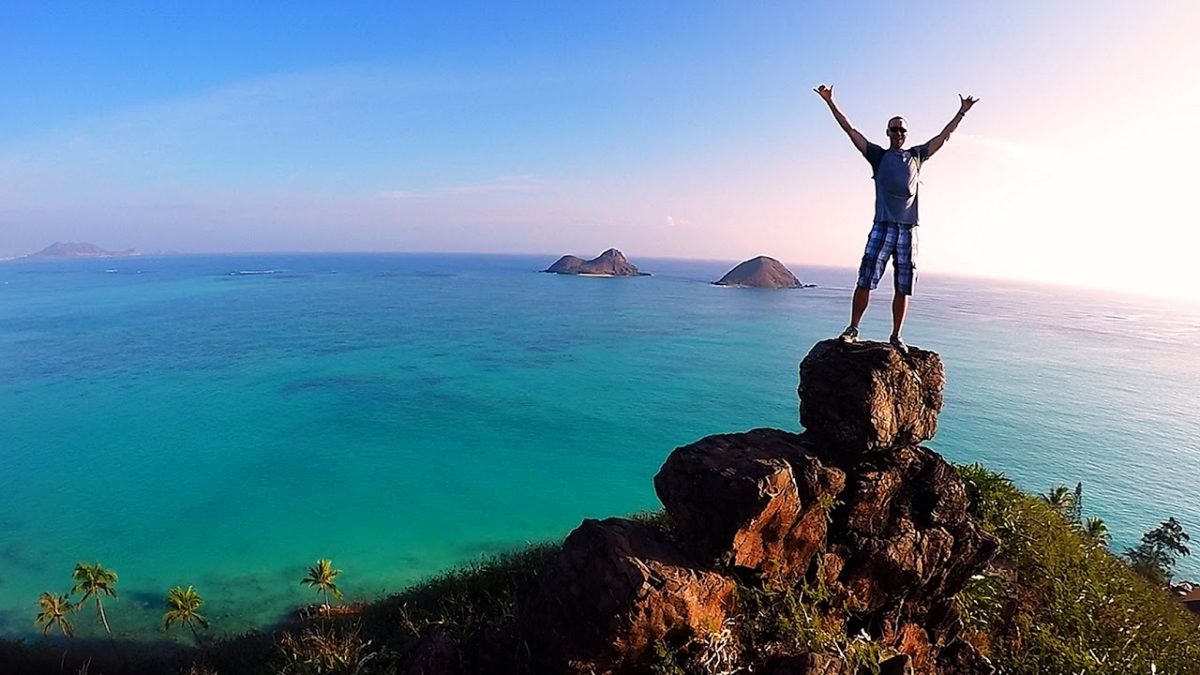 If you love trekking, you must not miss following the Lanikai Pillbox hike in Kailua. The Lanikai Pillbox trail leads to two military pillboxes. Once you reach the end of the trail, you will be greeted with one of the most amazing views in all Oahu — the Lanikai Beach.

As the trail runs above the beautiful Lanikai beach, the breathtaking scenery makes this trail the most popular as well as a favorite among hikers. The perfect time to take the Lanikai Pillbox hike is during the morning as the weather is cooler. At the end of the hike, most tourists love to sit around on the beach all day long. At sunset, the Lanikai Pillbox trail also looks amazing as it overlooks Kailua Bay.

Go surfing at Ala Moana on Honolulu 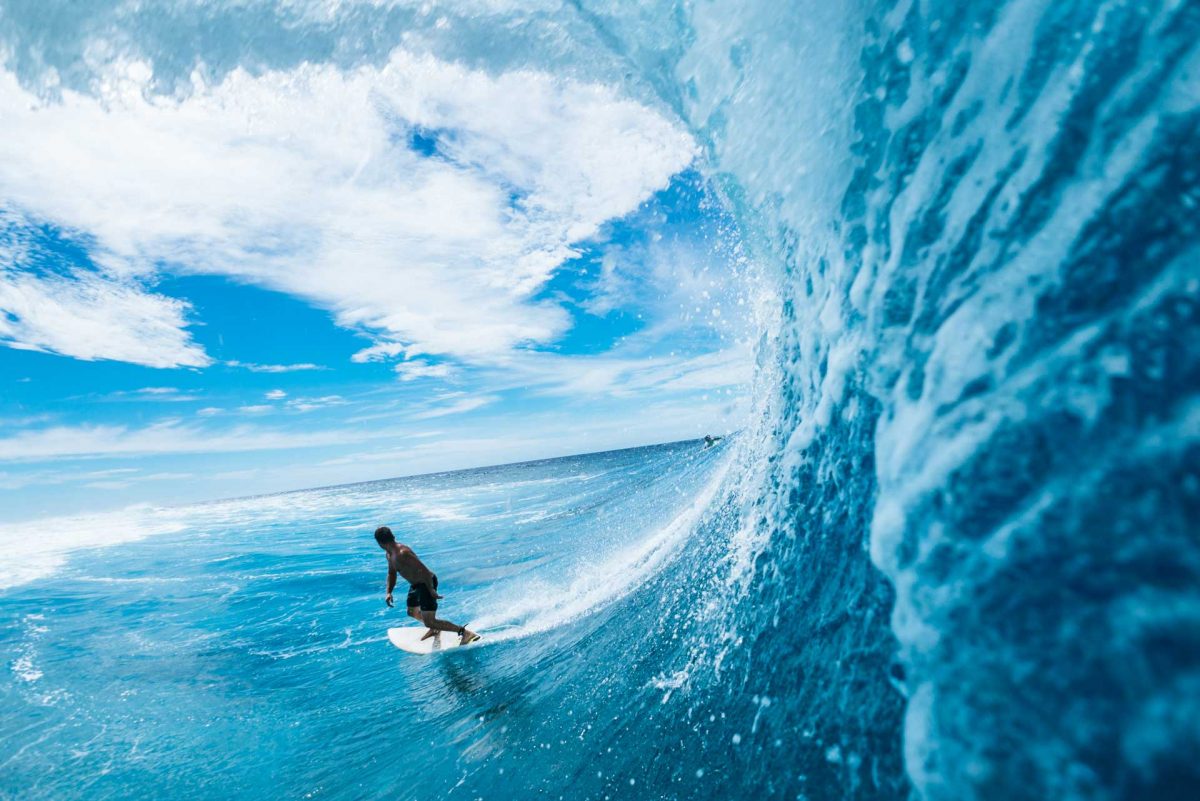 The southern coastal stretch of Oahu island is home to endless surfing spots. Most of them are famous all over the globe. For instance, you can catch surfing lessons in Ala Moana in Honolulu. Or if you’re confident enough, hit the water and surf to your heart’s content. If you are beginner wave rider, head to Waikiki for an amazing surfing experience.  If you’re a bit of an expert surfer, visit the Sunset beach of Honolulu and enjoy the tubes of the Banzai Pipeline.

The Makapu’u Point trail is part of the Kaiwi State Scenic Shoreline. Hike up to the top of the trail and reward your eyes with spectacular views of Oahu’s coastline, Koko Crater, and Koko Head.

The trail ends at Makapu’u Head. From there, you can see many offshore islands in the distance. Those islands are wildlife preserves for seabirds. You can also spot the historical Makapu’u lighthouse with its red roof in the middle of the sea. Lana’i and Moloka’i are also visible on a clear day. If you visit Makapu’u between November and May, you might even see migrating humpback whales.

A melting pot of cultures, Honolulu is a modern city with a unique blend of rich history and kind locals. It offers a number of activities — hiking through lush rainforests, surfing in world-class breaks, and relaxing on white sand beaches. So, wait no more, pack your bags, and marvel at the sights in this majestic island!

25 Amazing Day Trips from Seattle
Prev: Things To Do In M... Next: The Best Things T...