Quebec City lies on the north bank of St Lawrence River. It has many picturesque old streets full of history and interesting architecture that await exploration. From Montreal to Quebec City there is only a three-hour drive.

The attractions of Quebec City are not only located in the urban area but also in the surrounding region. 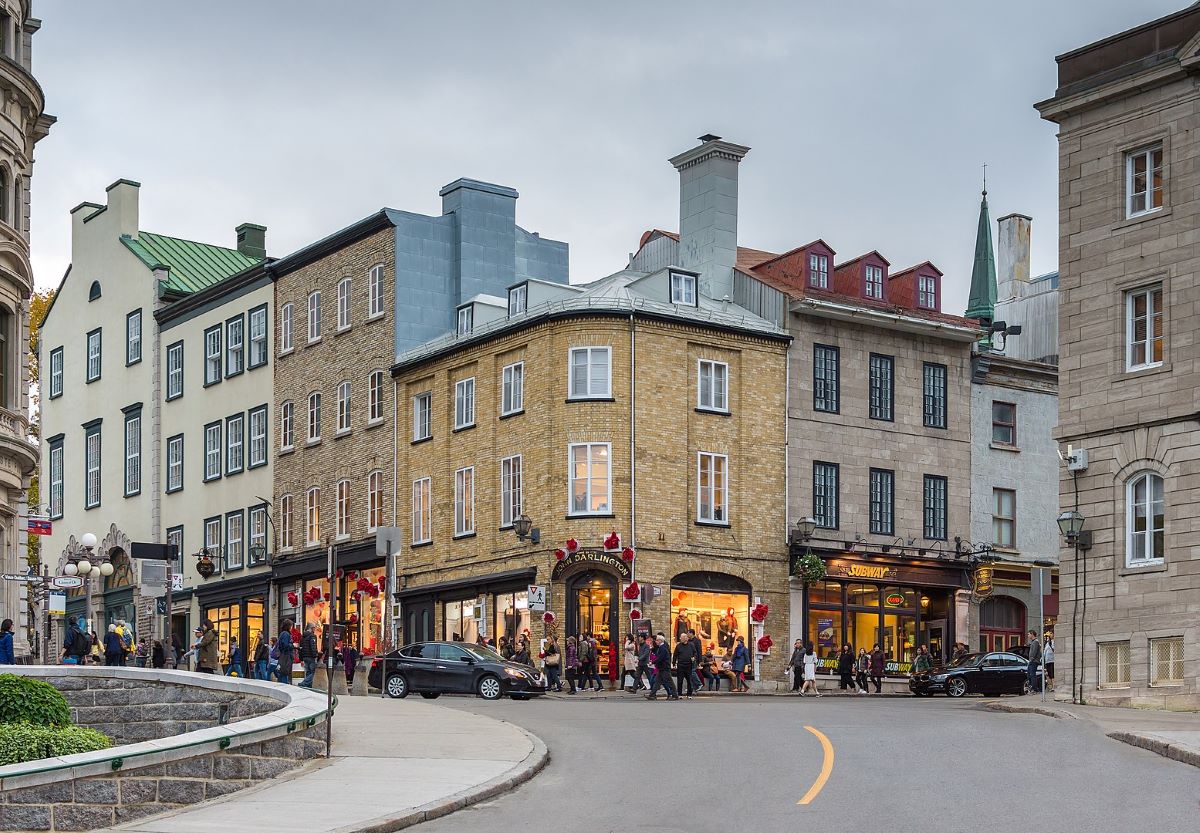 The Upper Town / Photo by The Photographer CC BY-SA 4.0 (from Wikipedia)

The historic district of Old Quebec, or locally called the Vieux-Québec, is a precious pearl that has a lot to offer. This part of Quebec City is a lovely place and it looks like an old European city. Old Quebec is formed of the Lower Town (la Basse-Ville) on the banks of the river and the Upper Town (Haute-Ville) on the hill above the river. You will immediately fall in love with the old-fashioned gift shops, the old narrow cobblestone streets and the amazing well-preserved 17th-century architecture. There are also great restaurants, outdoor cafes, lovely small hotels, many monuments and religious statues, horse-drawn carriages… Every corner of Old Quebec will leave you surprised.

Without a doubt, you will enjoy every minute of it. According to many, the summer is the best period to explore it. Prepare for lots of walking. Our friendly advice is to wear good walking shoes.

The Old Quebec is a UNESCO World Heritage Site since 1985. Most of the buildings in Old Quebec were restored in the past few years. Luckily, the Old Quebec’s defensive walls, known as the Ramparts of Quebec City, survived the passage of time. They are the only remaining fortress walls that still exist in North America north of Mexico.

Place Royale – The Place Where Quebec City Was Born 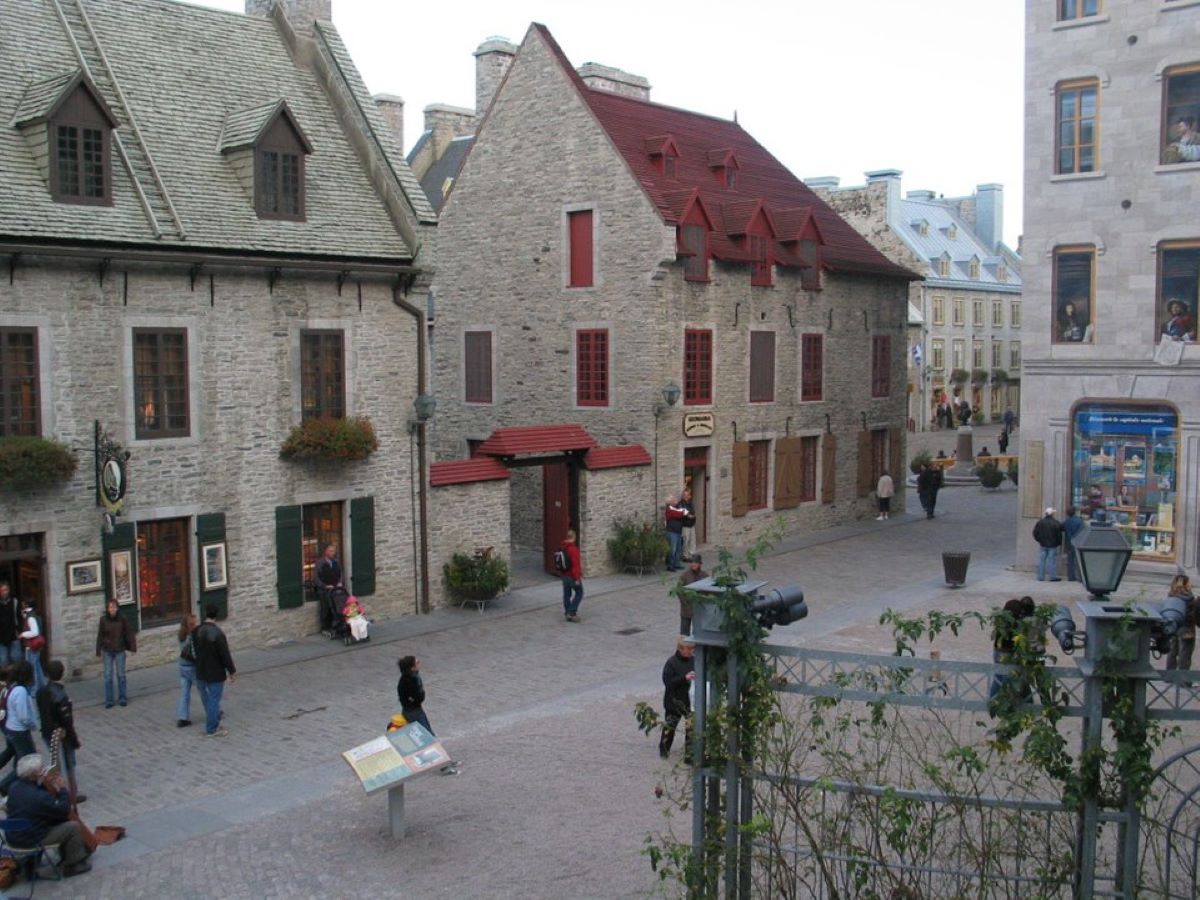 This place is literally the birthplace of the French-Canadian civilization. Here, by the river, in 1608 Samuel de Champlain opened a trading post and the story of Quebec City has begun. This small square is full of history. Take a little break and admire the remarkable New France architecture. 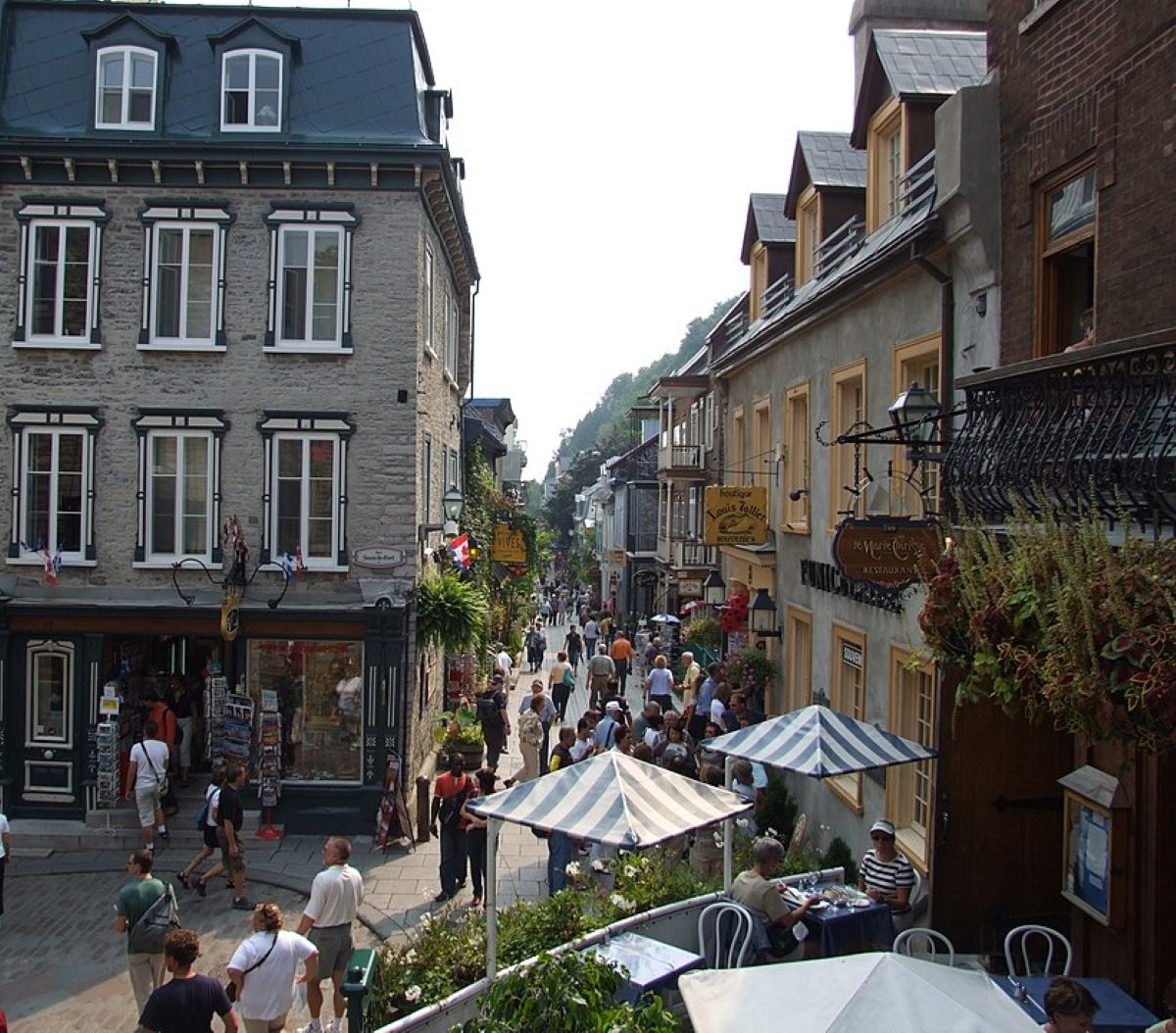 Petit-Champlain district is located between the Old Upper Town and the waterfront. The area was a small riverside hamlet in the past. Today it is a flourishing tourist destination. This especially charming part of Old Quebec has the most picturesque streets in the province. The cobblestone alleys and the old colourful houses will leave you speechless.

Throughout the years many of the houses were adapted into bistros, theatres, museums and galleries. There are numerous plaques and statues scattered around Petit-Champlain telling the history of Quebec City. Some historians believe that one of the Petit-Champlain streets is the oldest commercial avenue in Canada and the U.S. 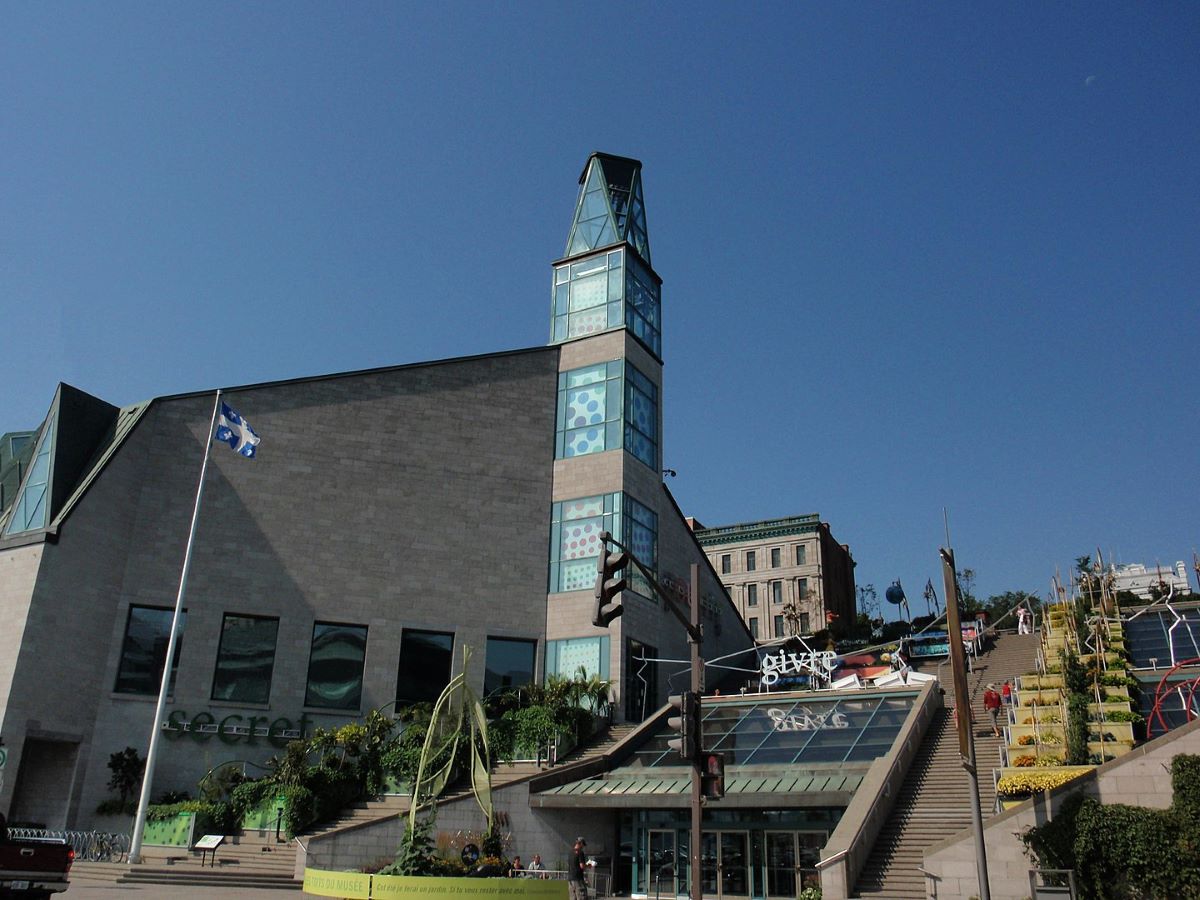 This museum is located in Old Quebec near the St Lawrence River. It is a fascinating mix of modern design that incorporates old buildings with contemporary architecture. The eminent architect Moshe Safdie designed it. Two permanent (People of Québec: Then and Now and This Is Our Story – which shows the contemporary Aboriginal art and cultures of the province of Quebec) and several temporary exhibitions are held at the museum. It is probably the only museum in Quebec City that focuses on contemporary issues and culture. Opened for the public on December 1988. 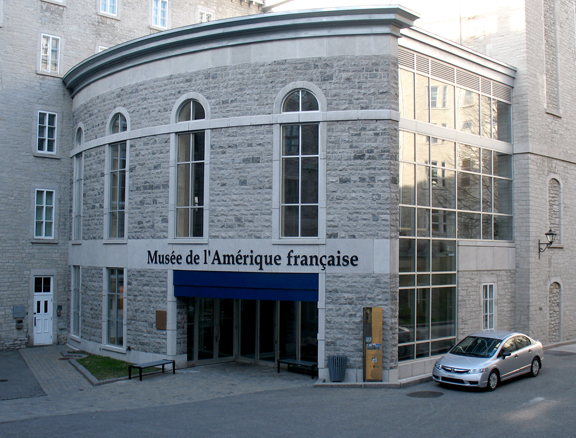 This museum mainly celebrates French culture in North America. It is placed in the heart of Old Quebec in Séminaire de Québec, which was home of the first university in Canada. Relics and other precious items of Quebec City’s religious heritage are part of the collection. Musée de l’Amérique francophone is part of the Musée de la civilisation complex. 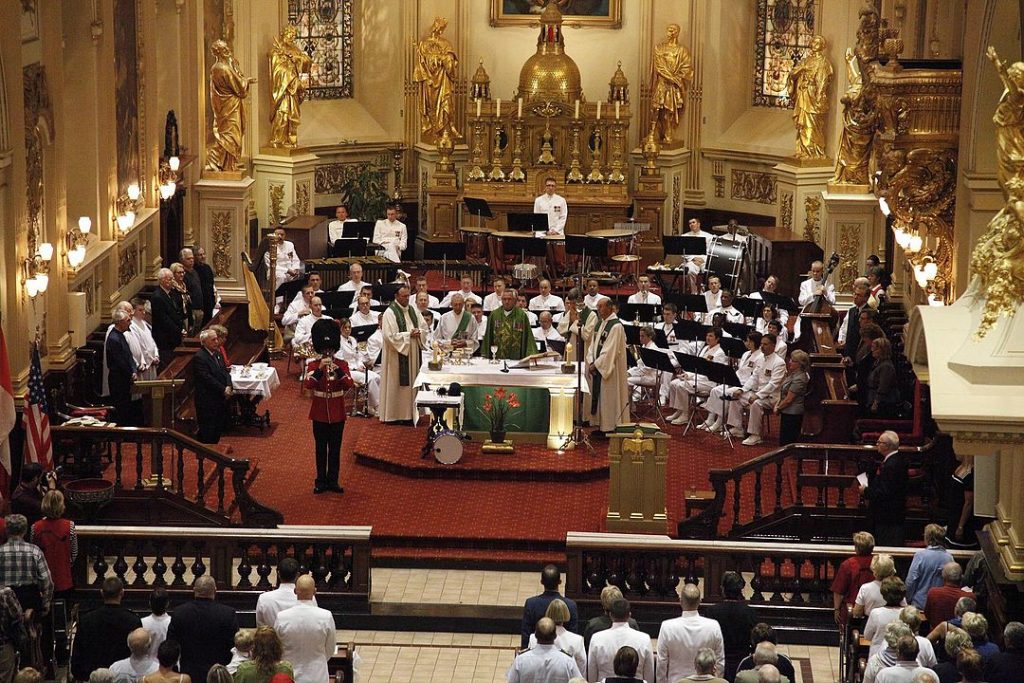 Just close the Musée de l’Amérique Francophone is located Cathedral-Basilica of Notre-Dame de Québec. It is the oldest church in Canada and one of the most important Catholic Church in the province of Quebec. In 2014 the cathedral celebrated its 350th anniversary as the first Catholic parish in North America. As part of the celebrations, a Holy Door was built. It is one of the eighth in the world and only the second outside of Europe. Building a Holy Door is an exceptional privilege authorized only by the Holy See. Quebec City’s Holy Door attracts thousands of tourists from around the world. 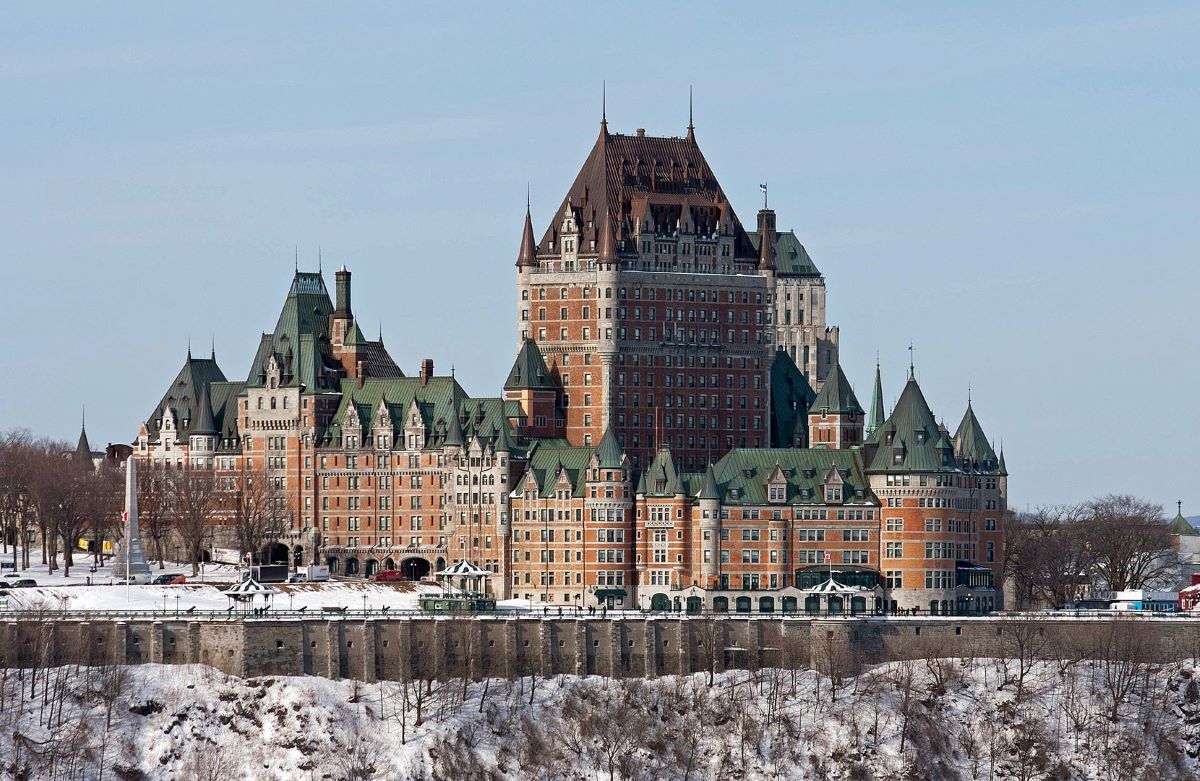 Chateau Frontenac was never a castle. In fact, the Canadian Pacific Railway constructed it at the end of the 19th century as part of its chain of “château” style luxury hotels erected throughout Canada. The American Bruce Price was the architect of this extremely original structure. It was officially opened in 1893 and named after the Comte de Frontenac, one of the first governors of Nouvelle France. Today Fairmont Hotels and Resorts manages the five-star hotel. Guided tours are no longer offered. However, you can enter inside for a drink or a meal. There are located several shops and cafes, as well as the Champlain Restaurant, one of the best restaurants in Quebec City. 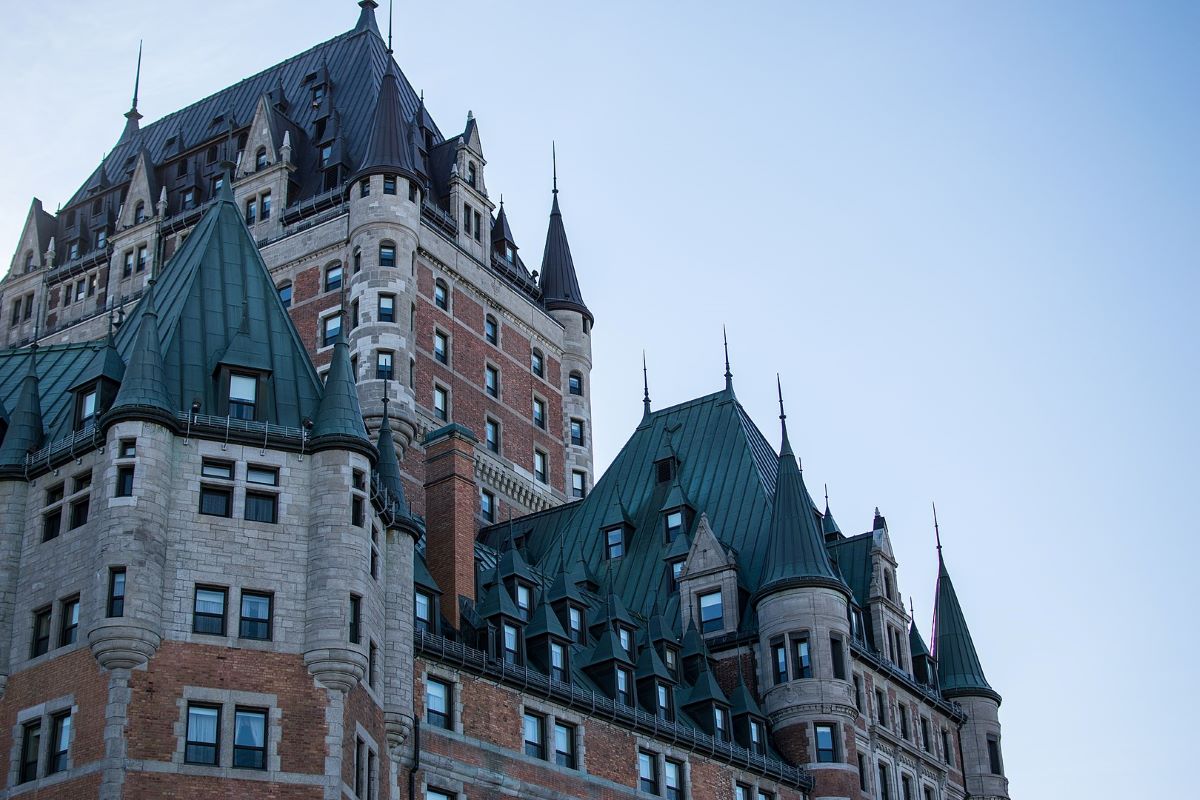 The castle and its impressive central tower sit on top of Cap Diamant, a cliff that stands above the St Lawrence River. Alfred Hitchcock chose the hotel for the opening scene of his 1953 film I Confess, starring Montgomery Clift and Anne Baxter. Actually, the legendary director used many other locations of Quebec City as filming locations for this mystery noir film.

In August 1943 and in September 1944, Franklin Roosevelt and Winston Churchill met in Chateau Frontenac with Canada’s Prime Minister William Lyon Mackenzie King and planned the final stages of WWII.

Enjoy The Panoramic Views From The Dufferin Terrace 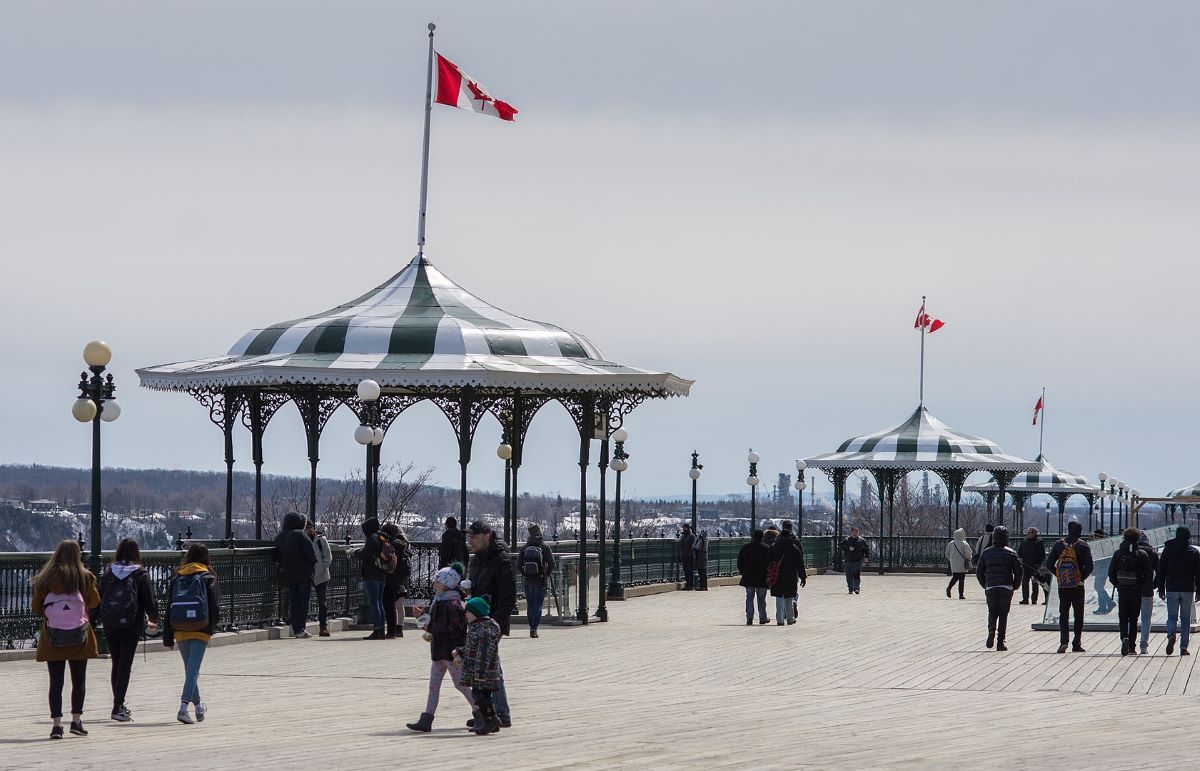 Terrasse Dufferin/ Photo by The Photographer CC BY-SA 4.0 (from Wikipedia)

In front of Château Frontenac and overlooking the river is located the Terrasses Dufferin or the Dufferin Terrace. This 200-years-old wooden walkway encircles Château Frontenac and connects the historic battlefields to Old Quebec. Just wander around the iconic hotel and enjoy the stunning views. Here you can see also several other remarkable attractions, like the Russian cannons captured by the British army during the Crimean War, as well the original fortifications of the Upper Town.

Learn About The Military History In La Citadelle De Quebec 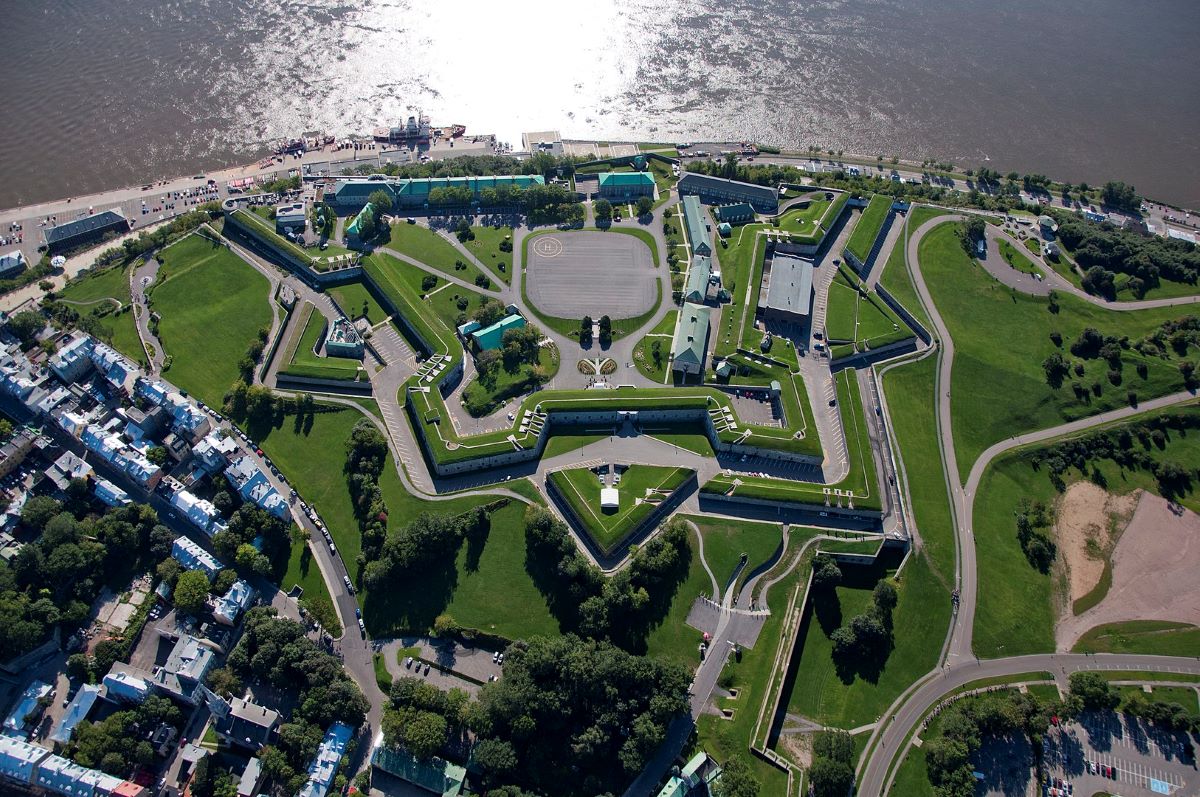 Aerial view of the Citadelle/ Public Domain (from Wikipedia)

The Citadelle of Quebec is located within the historic district of Old Quebec. It is a national historic site of Canada since 1980. The Citadelle is part of the fortifications of Quebec City. It is the most important and the largest British fortress in North America.

The Citadelle is a fascinating stronghold with more than 300 years of history. It is located on Cap Diamant, Quebec City’s highest point. The French started the construction in the middle of the 18th century. It got today’s shape between 1820 and 1850 during the British reconstruction. They strengthened primarily in order to defend Quebec City from an invasion of the Americans. However, the Americans never attacked it.

The Museum Of The Royal 22e Régiment 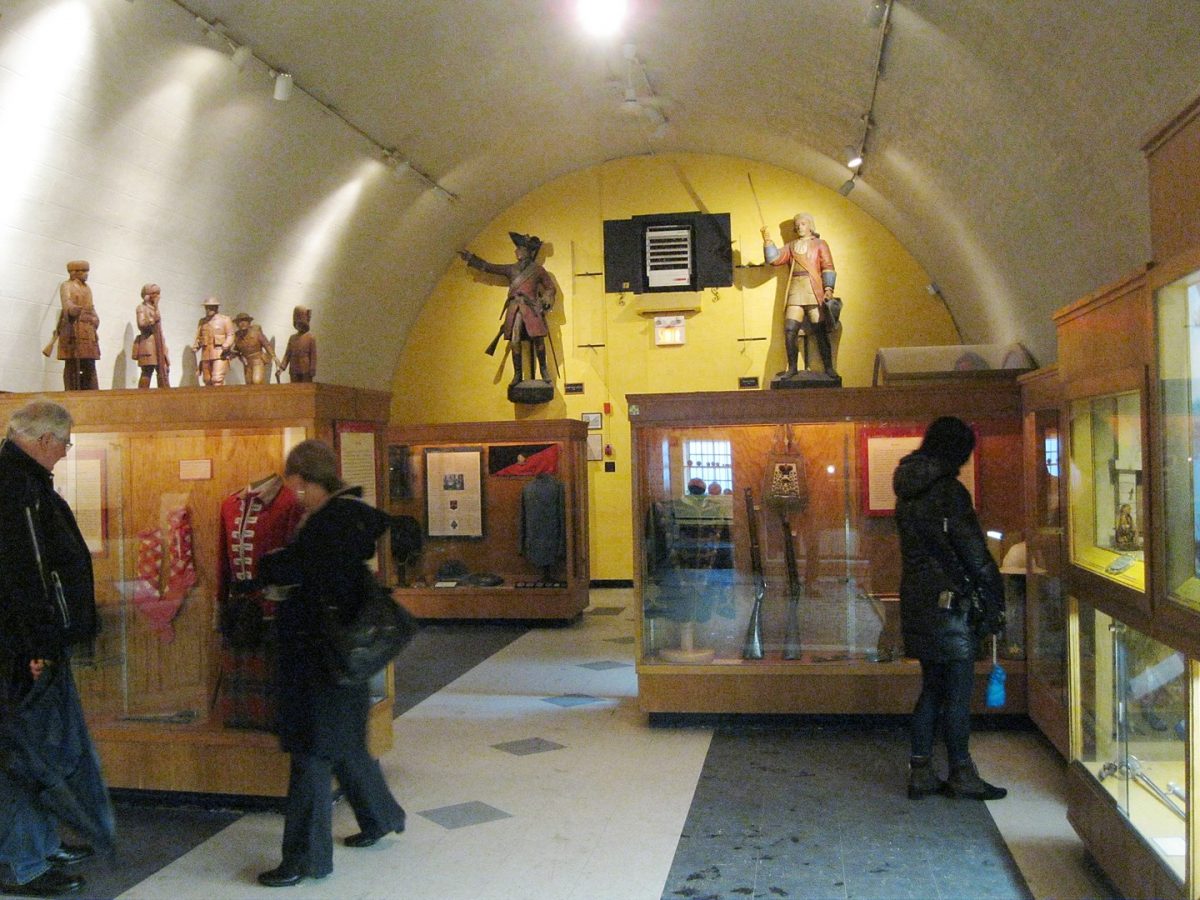 The history of the Citadelle displayed in one section of the museum of the Royal 22e Régiment/ Photo by Jeangagnon CC BY-SA 3.0 (from Wikipedia)

During the one-hour guided tour of the Citadelle, you can see numerous historical structures, like the reduit, later used as a military prison and the King’s Bastion. There is also the Royal 22e Régiment museum. In fact, the Citadelle is the base of Canada’s Royal 22e Régiment. The only French-speaking regiment in Canada was founded during WWI and earned three Victoria Crosses in WWI and WWII. 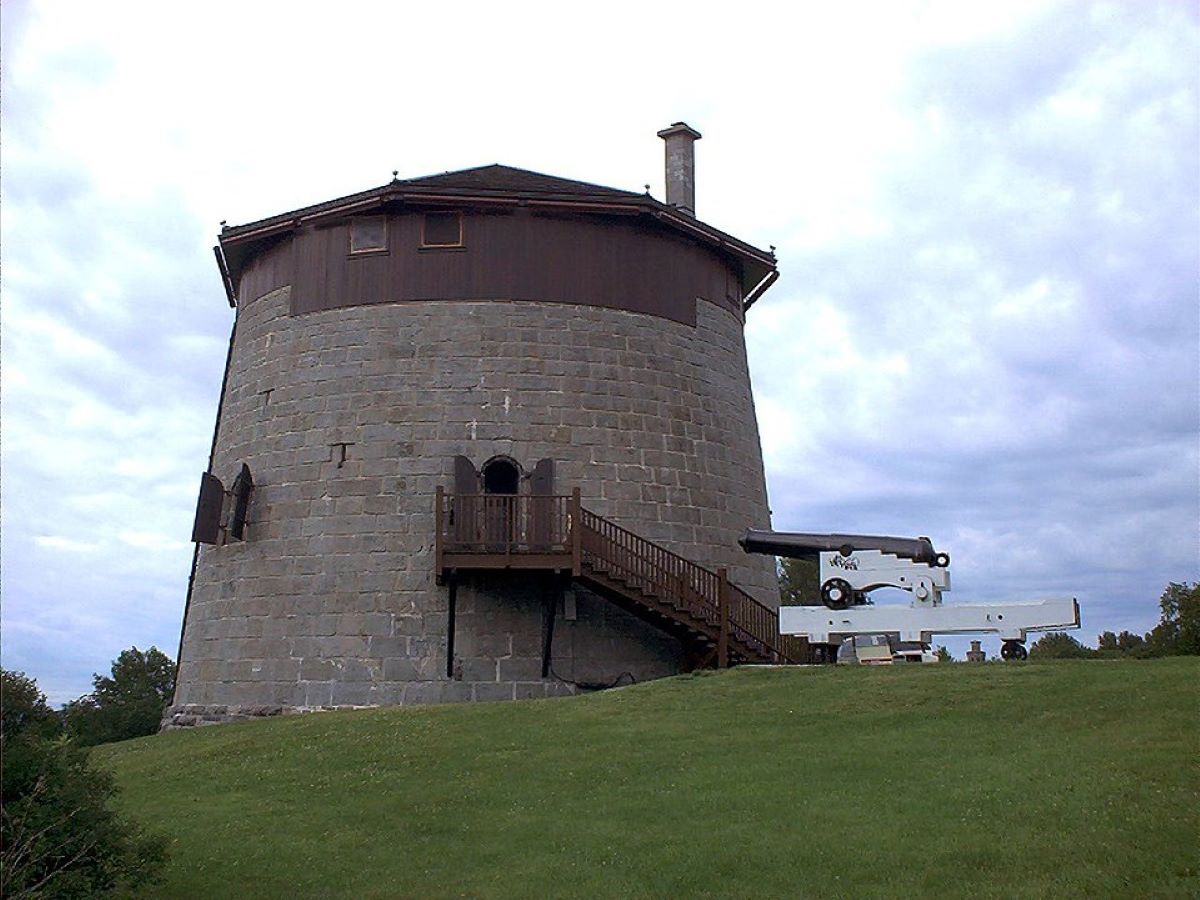 The Battlefields Park includes the Plains of Abraham and the close Des Braves Park, both located in the district of Montcalm in Quebec City. It is significant not only because of the Battle of the Plains of Abraham but also because of the Battle of Sainte-Foy, fought at the end of April 1760 on the grounds of today’s Des Braves Park. Great parts of the fortifications and 3 of the original 4 Martello towers are still visible. The British built them in order to prevent eventual American attack. The construction started in 1808 and ended in 1812. Today, this enormous urban park is mostly used for festivals and outdoor activities. The Battlefields Park is one of the several Canadian national urban parks. 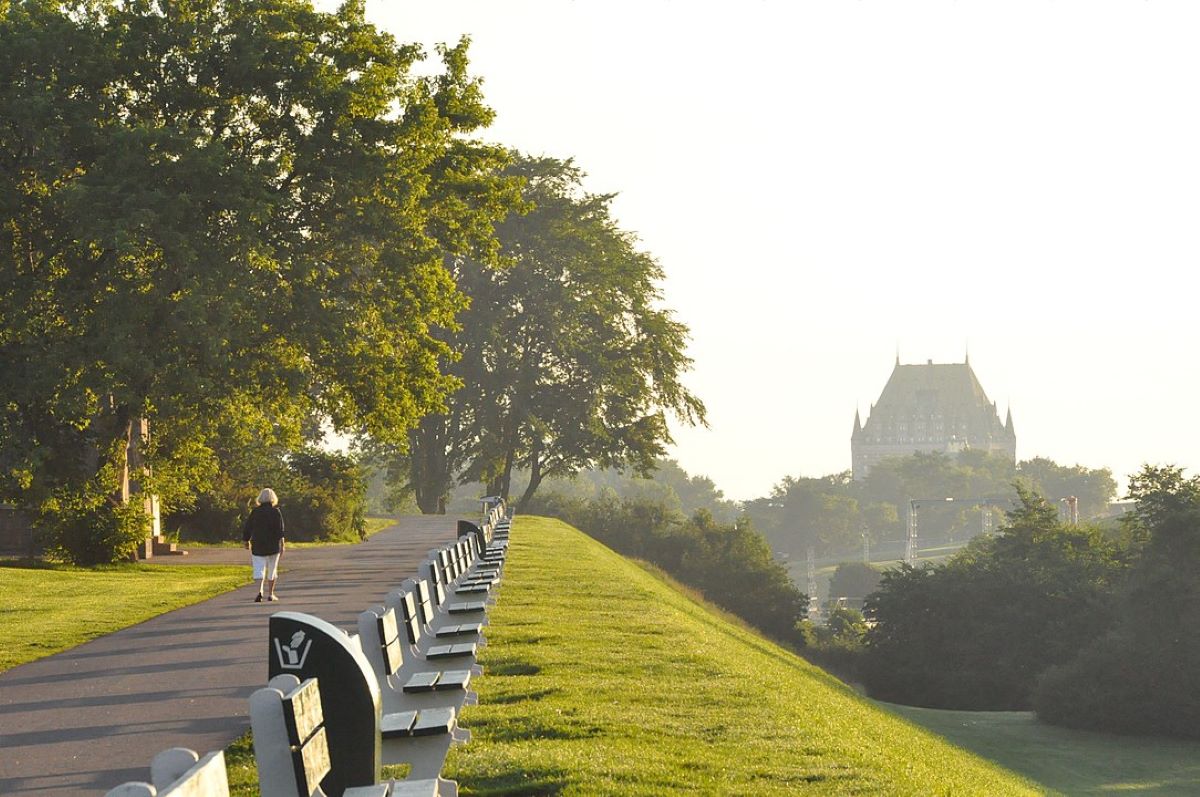 Plains of Abraham in summer/ Photo by Guillaume Cattiaux CC BY-SA 2.0 (from Wikipedia)

The Plains of Abraham is a historic area within the National Battlefield Park. It is the site of the Battle of the Plains of Abraham (also known as the Battle of Quebec) and one of Canada’s most important historic locations. In the close area, the British and the French armies fought against each other several times for the control of North America. In September 1759 on this land, then owned by the farmer Abraham Martin, took place the final battle between the British and the French Army. The commanders of the two armies both died during the battle. They are honoured on a shared monument. The battle lasted only 40 minutes but changed the fate of Canada. The British won and took control of the French colony.

A Heaven For The Art Lovers – The Musée du Québec 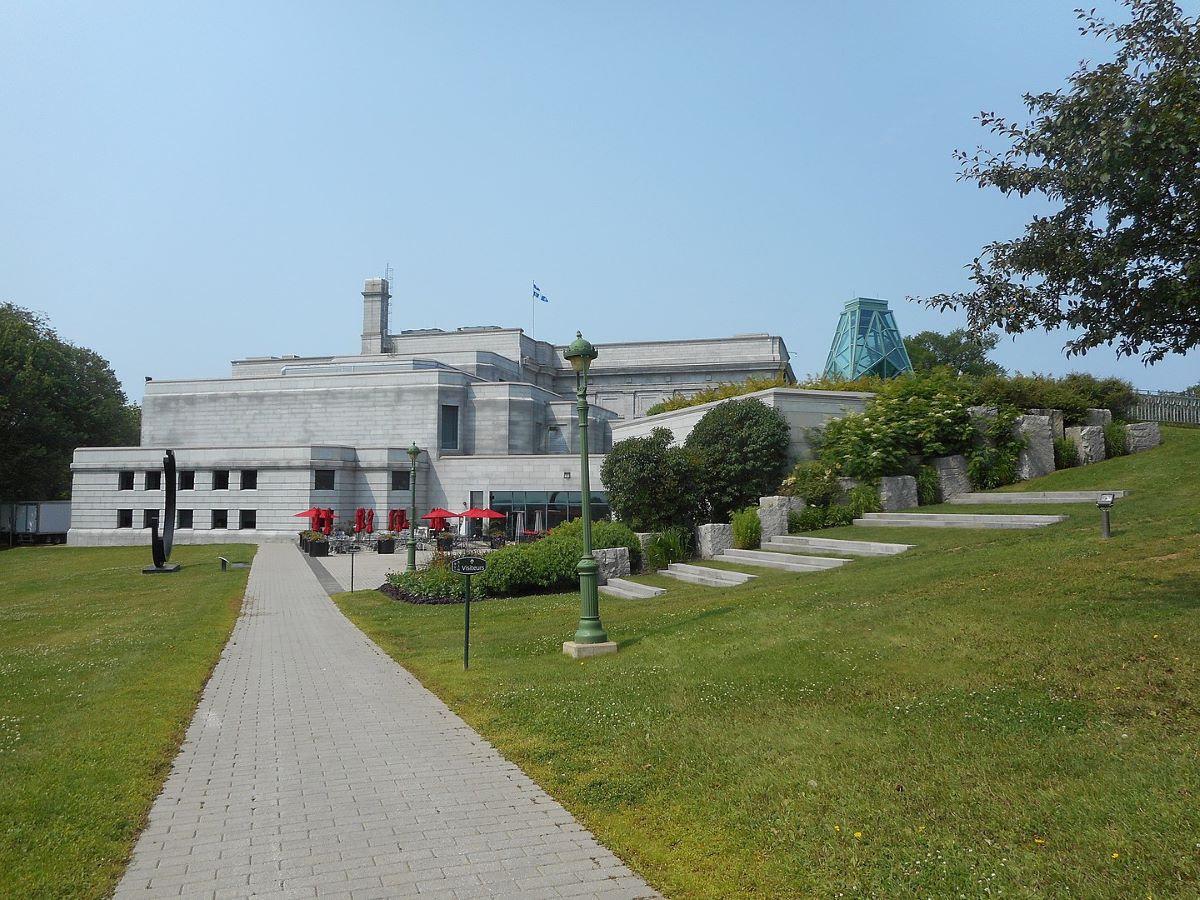 The museum is on Battlefields Park grounds. It has one of the most impressive art collections in Canada. Nearly 25,000 works primarily created in Quebec, or by Quebec artists, some of which date from the 18th century can be seen here.

Explore The Marine Life In The Aquarium Of Quebec 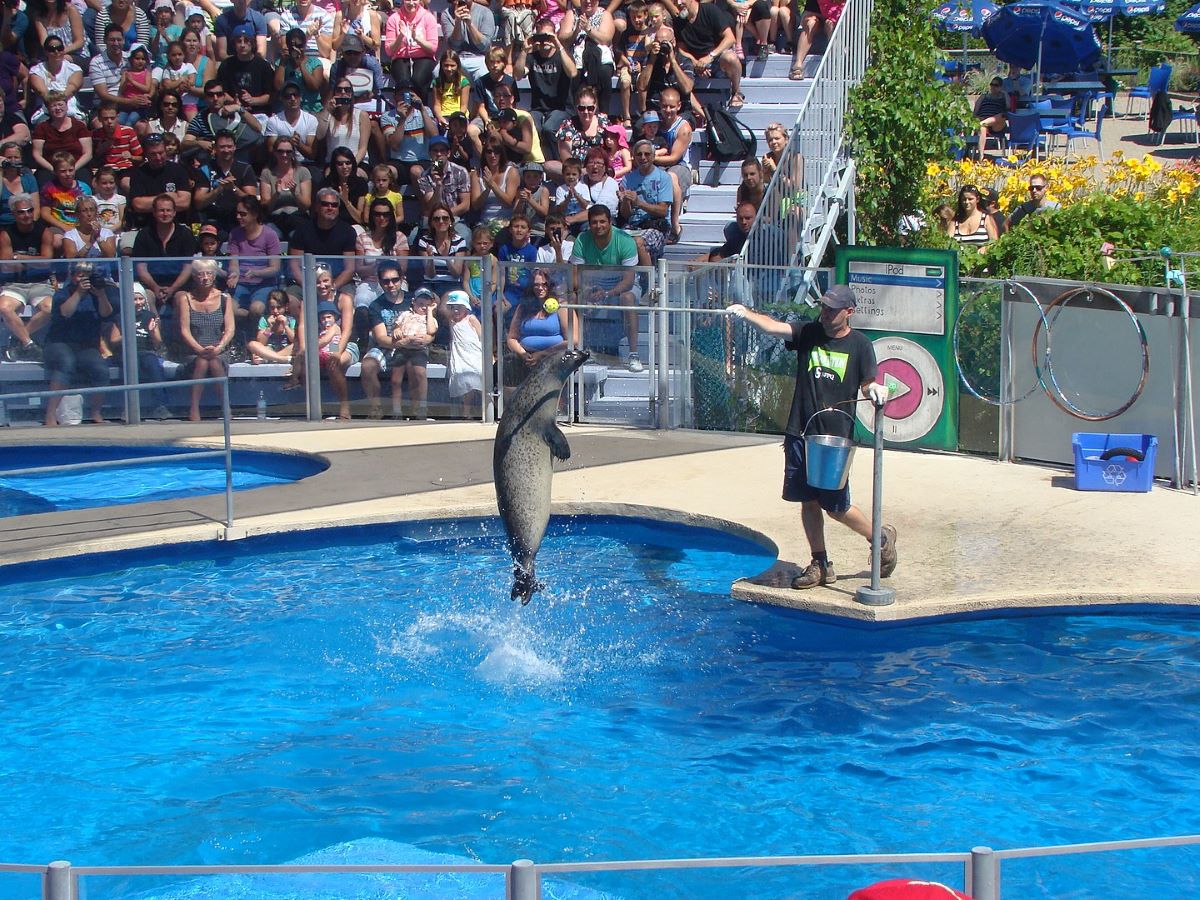 The Aquarium of Quebec/ Photo by MartianBold CC BY-SA 4.0 (from Wikipedia)

This public aquarium is situated in the former city of Sainte-Foy, amalgamated into Quebec City on 1 January 2002. The 16-hectare facility is home of around 10,000 marine animals (fish, amphibians, invertebrates, reptiles and sea mammals). The stars of the Aquarium are the walruses and the seals.

A Unique Experience in the Quebec City Ice Hotel 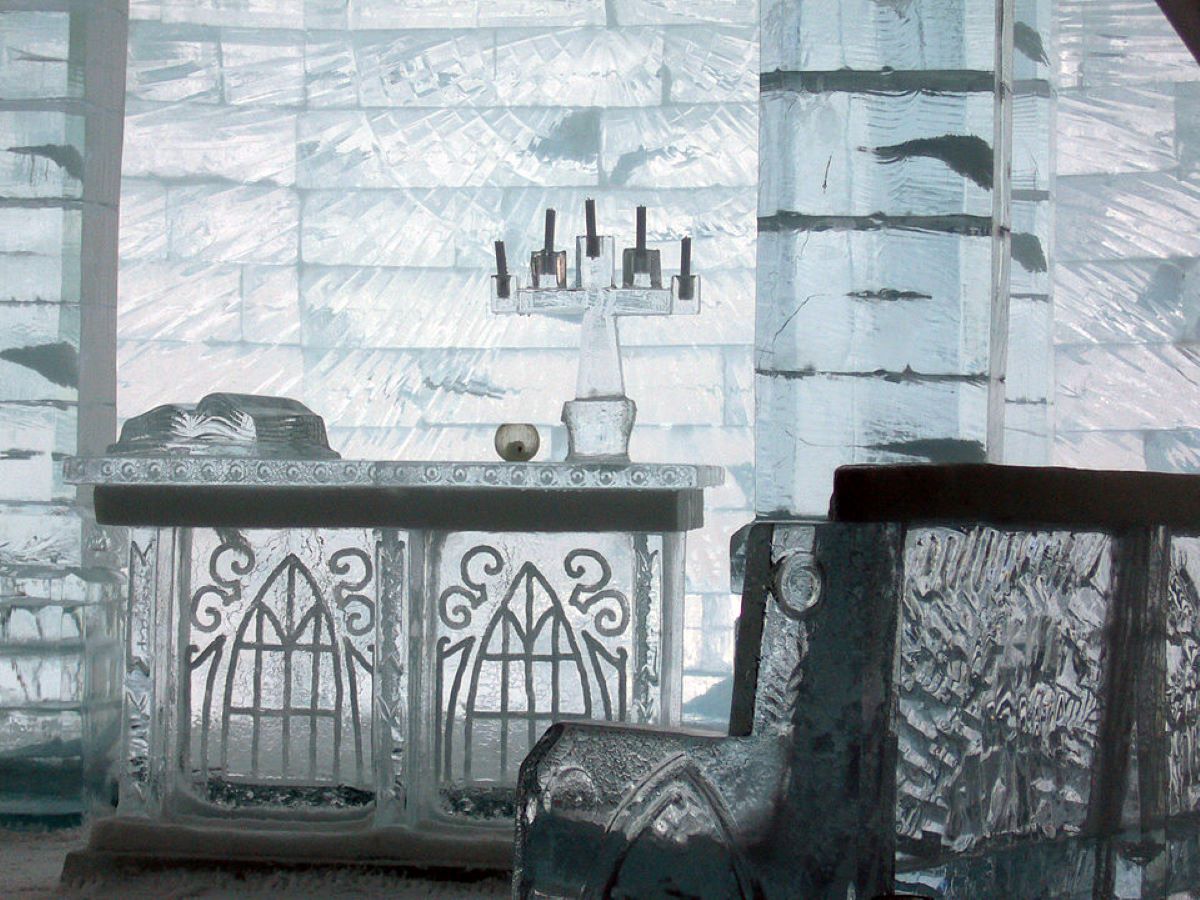 The Quebec Ice Hotel (Hôtel de Glace) is located close to the village of Valcartier, approximately 20 minutes from Québec City. It is the only ice hotel in North America. This magical world of snow and ice is open from January until March. The hotel has 44 rooms and suites completely made of ice. Also, the entire furniture and the decorations are completely carved out of ice. Each room is unique and reinvented once a year. There is even an ice slide inside the hotel. A night stay or a quick visit… It’ is up to you. Enjoying a cocktail in a glass made of ice is a must. Relaxing in the exterior sauna and hot tubs is a must too.

A Day Trip To Montmorency Falls & The Basilica 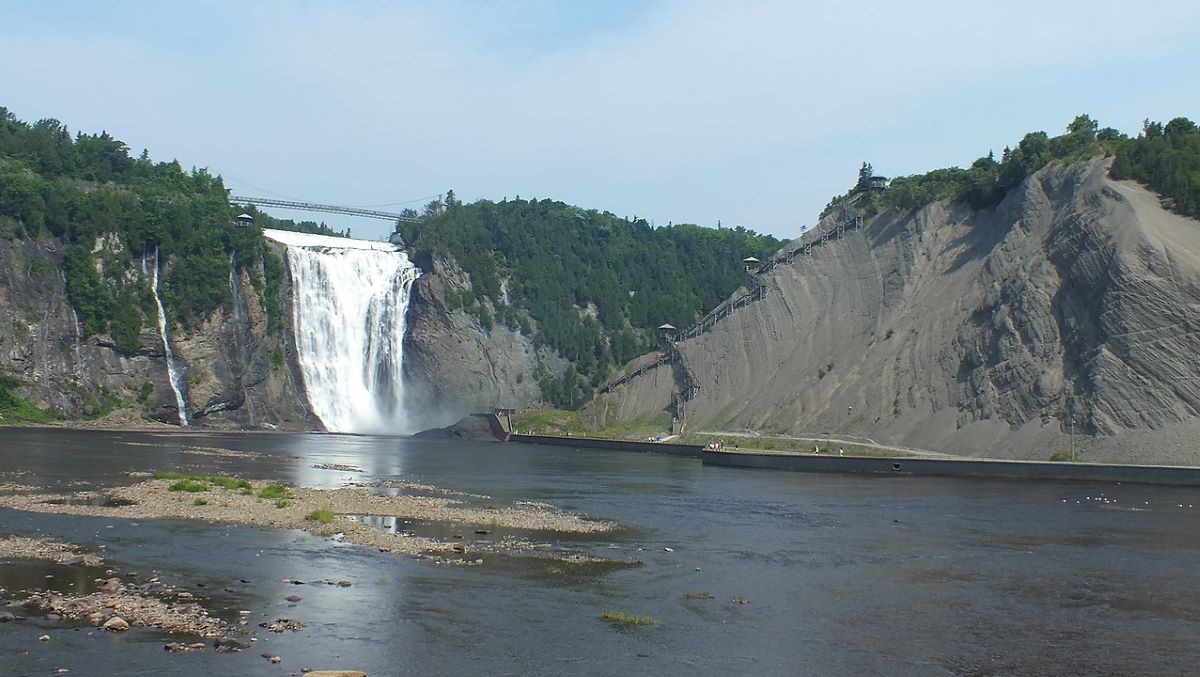 Just outside of Quebec City is located the Montmorency Falls. The 270-ft tall waterfall on the Montmorency River is nearly 100 feet (30 meters) taller than Niagara Falls. You can explore the waterfalls from a boardwalk along the side or from a suspension bridge placed at the top of the waterfall. In winter, dew from the falls creates one of the most majestic ice walls in North America. In his poem “Sleep and Poetry” from 1816, John Keats says that human life is “a poor Indian’s sleep / While his boat hastens to the monstrous steep / Of Montmorency.” 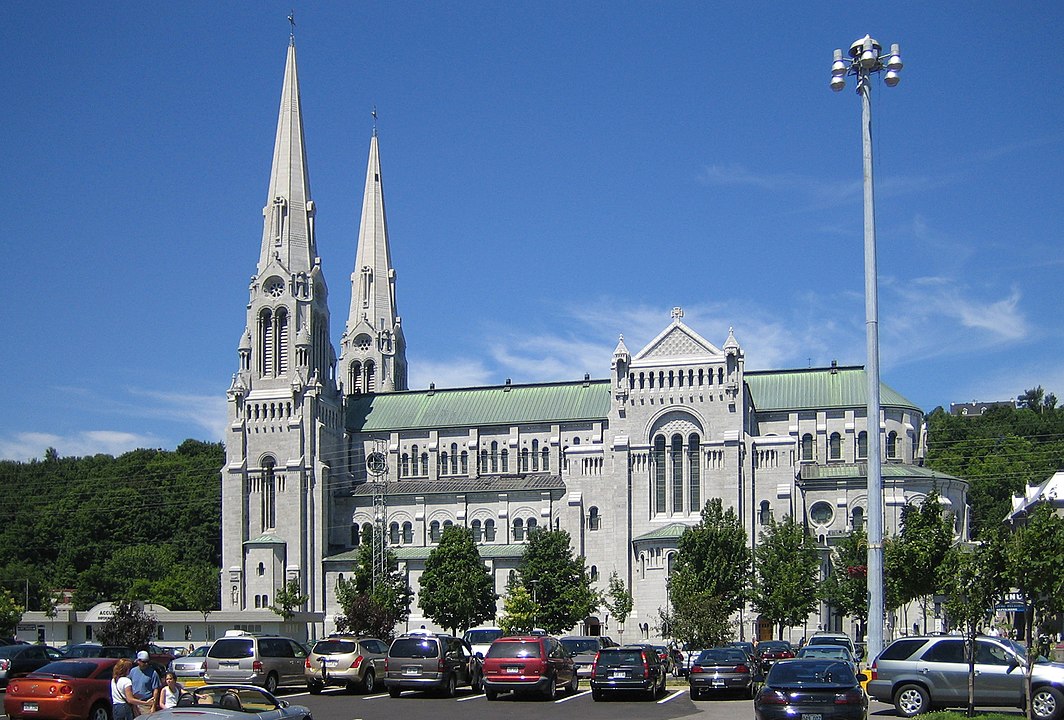 The Basilica of Sainte-Anne-de-Beaupré is a significant Catholic sanctuary. The oldest section of the church is from the 17th century. Many believe that the precious relics of Sainte Anne have healing powers. More than a half-million pilgrims visit the site each year. Just thirty minutes outside Quebec City. 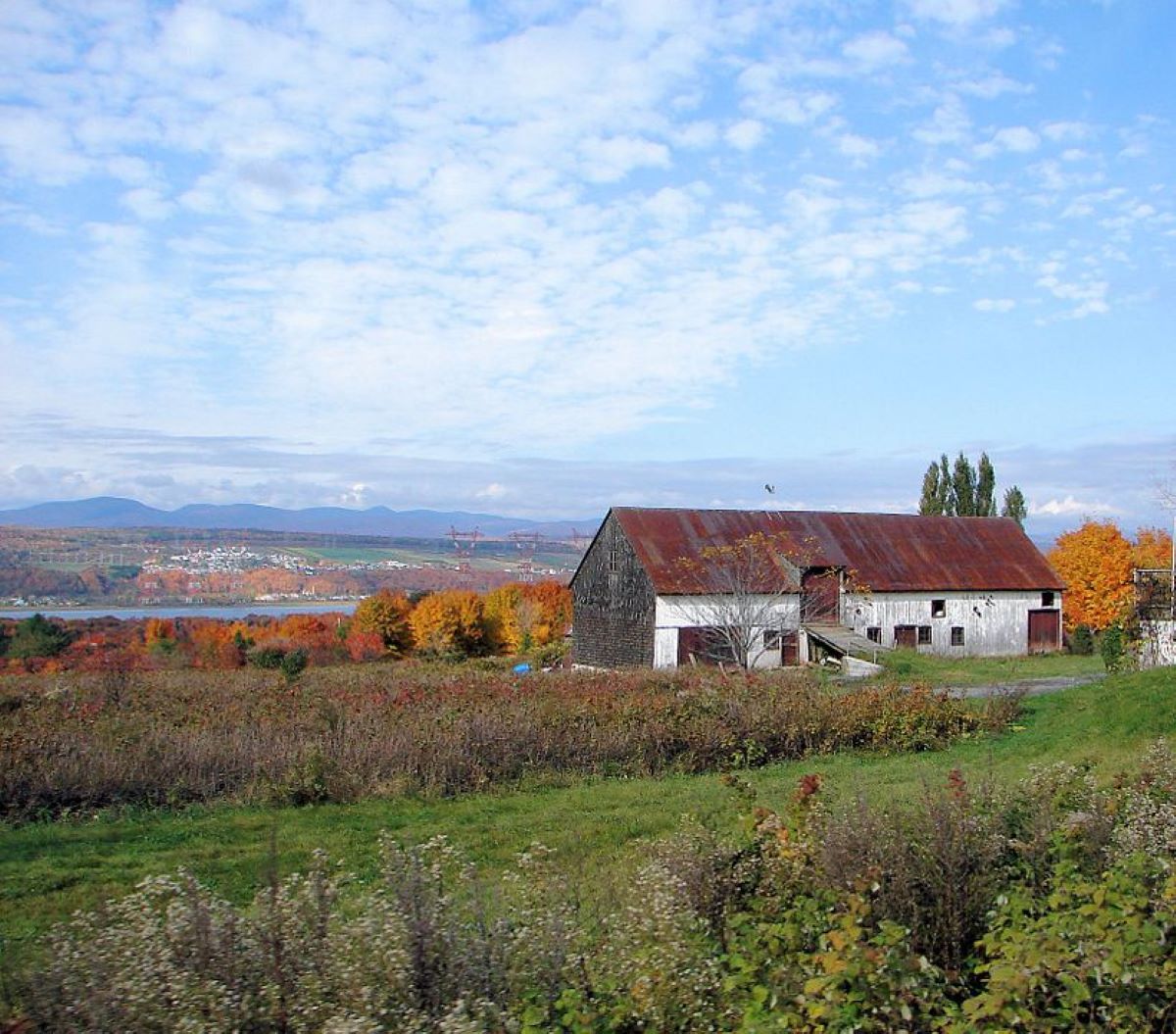 Right in front of the falls is the Île d’Orléans Bridge that leads to Île d’Orléans. This island, also known as the “Garden of Quebec”, was one of the French’s first settled areas of Quebec. Its residents still maintain a traditional way of life. A glass of local wine and cuisine made of local potatoes, strawberries and apples are on the menu. Bon appétit.