The Romantic Road in southern Germany attracts more than 2 million visitors a year. It is the oldest and one of the best known touring roads in Germany. This holiday route was established after World War II. The German authorities decided to promote the ancient trade route from the River Main to the Alps and to turn it into a popular tourist attraction. Attracting tourists and recovering the economy of the region was their main priority.

In the 1950s the German tourism industry came up with the advertising slogan “Romantische Strasse.” The legend says that the American soldiers stationed in the bases in Bavaria and Baden-Württemberg during the post-World War II occupation years named this scenic route. Actually, the American soldiers and their friends and families were the first visitors of the Romantic Road. 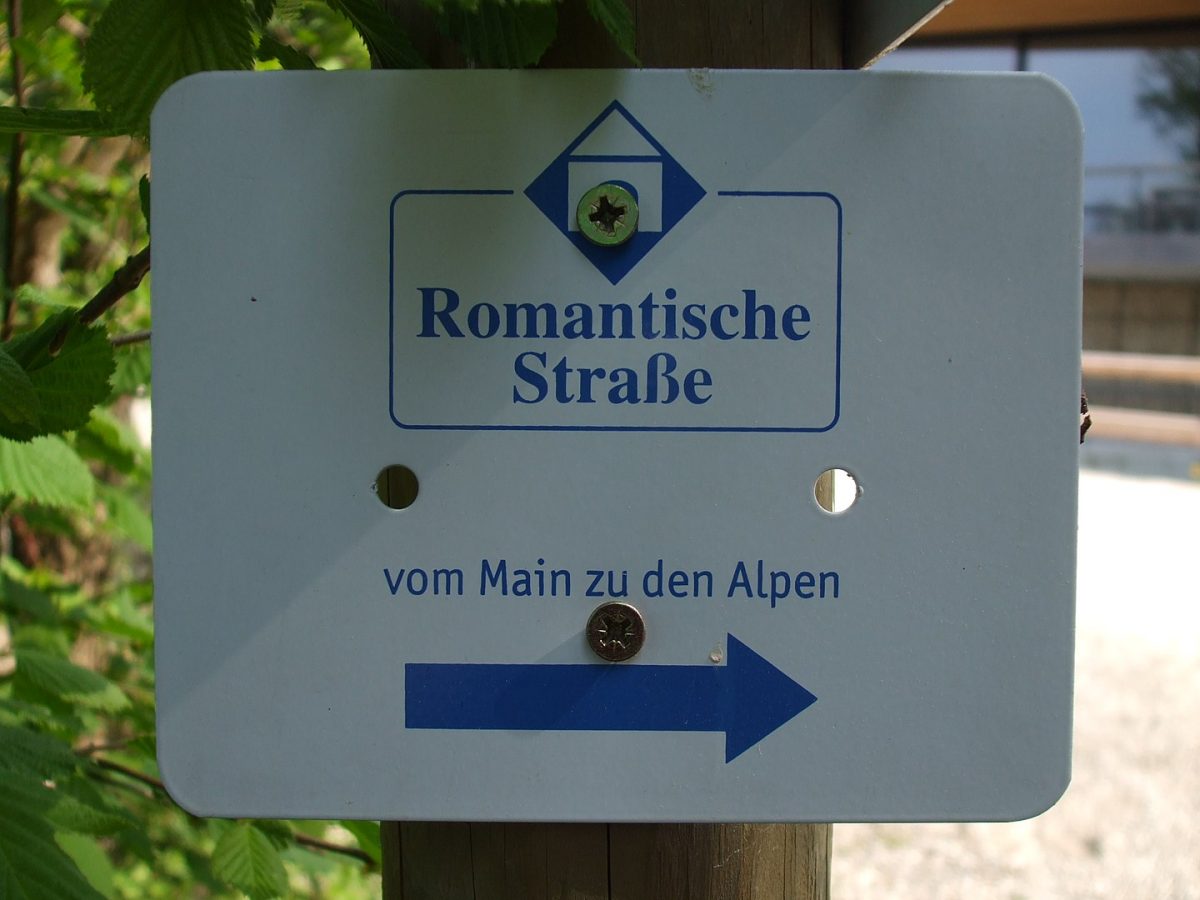 Photo by Thomas Then CC BY 3.0 (from Wikipedia)

The Romantic Road is a journey from Würzburg, on the north of the Bavaria region, to Füssen, just close to the Austrian border. The route leads through several charming medieval walled towns and villages of Bavaria. A small part of the road passes through Baden-Württemberg.

Enjoy the breathtaking scenery and explore the authentic villages and towns on the route from the Franconia wine region to the foothills of the Bavarian Alps. This part of Germany is known for its unspoiled nature, mighty towers, fairytale medieval castles, hidden monasteries, vineyards, colourful half-timbered houses with cherry-red flowers in window boxes and much more…

Without a doubt, the journey on the Romantic Road is a unique experience. Along the road, you can also see lush meadows, picturesque gardens, farms, mills, small forests, flowering fields with different colours and beautiful valleys surrounded by mountains and crossed by wild rivers of crystal clear water.

Where To Start The Journey And Other Useful Tips 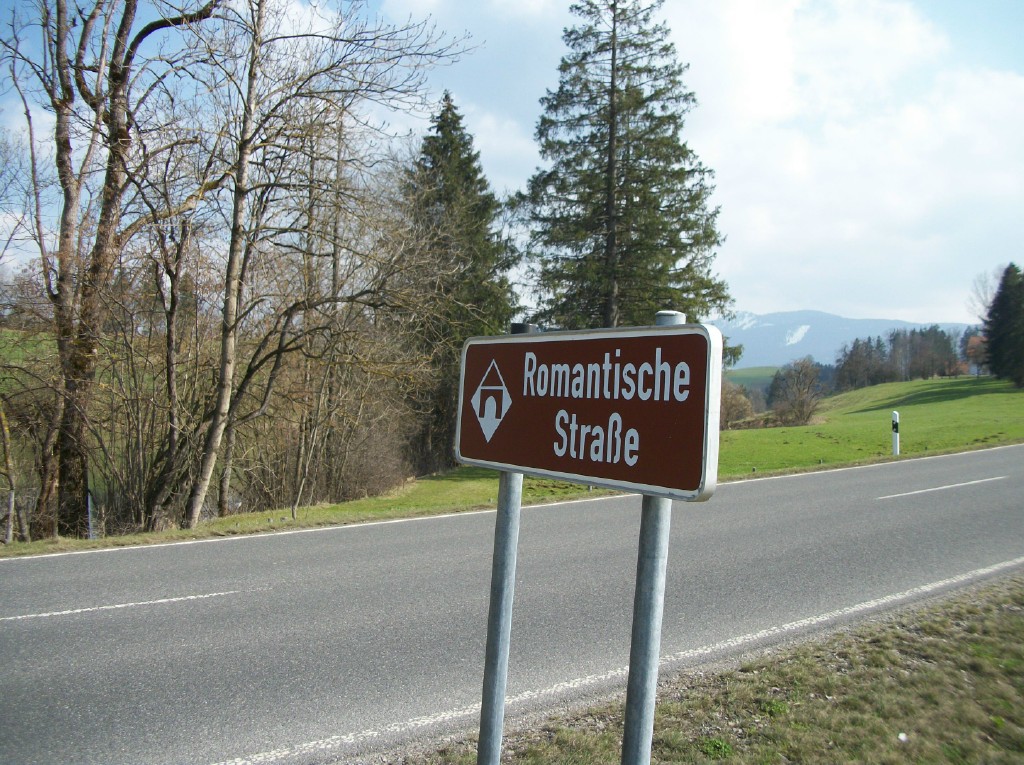 Start your journey in Wurzburg and end it in Füssen or vice verse. In fact, it really does not make a difference which direction you choose. If you go with a car, the scenic drive of nearly 413 km (257 miles) can be finished in one day, but you would miss so much. Take your time and enjoy fully the Romantic Road. Stop in a few towns and spend a night or two in one of the many romantic hotels. Drink local wine or beer and eat fantastic local food in the lovely restaurants.

You can also explore the Romantic Road by bus, on your bicycle or even on foot. Do not worry that you will get lost. There are brown signs ” Romantische Strasse” on the side of the road. Just follow them and they will tell you where to go. The regions of the Romantic Road are also well-connected with railways.

Begin The Journey In Würzburg 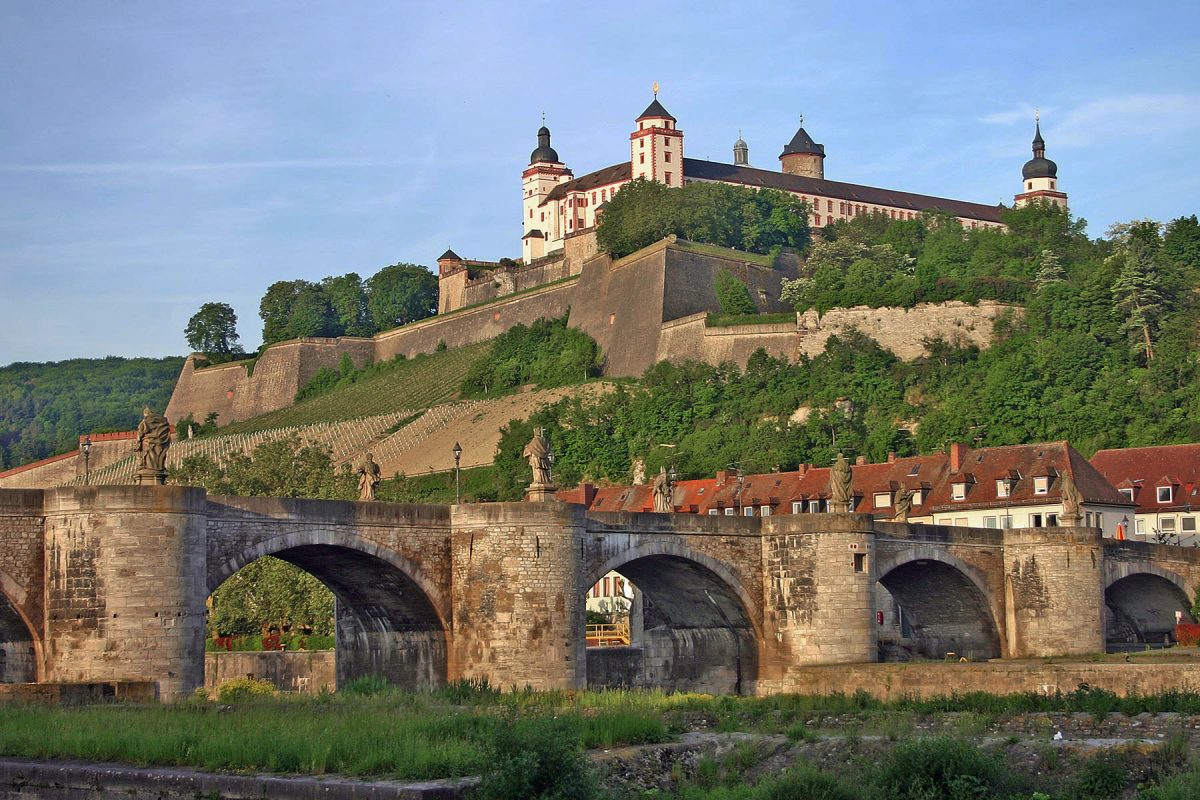 The Romantic Road starts (or ends) in Würzburg, a charming city with a long history. It was once the seat of the important Prince-Bishops. The area is also well-known for its world-class wineries. Visit the splendid Würzburg Residence, a UNESCO World Heritage site and one of Europe’s greatest Baroque palaces. Admire the several historic churches, including the wonderful Kappele, as well as the magnificent Marienburg Fortress. 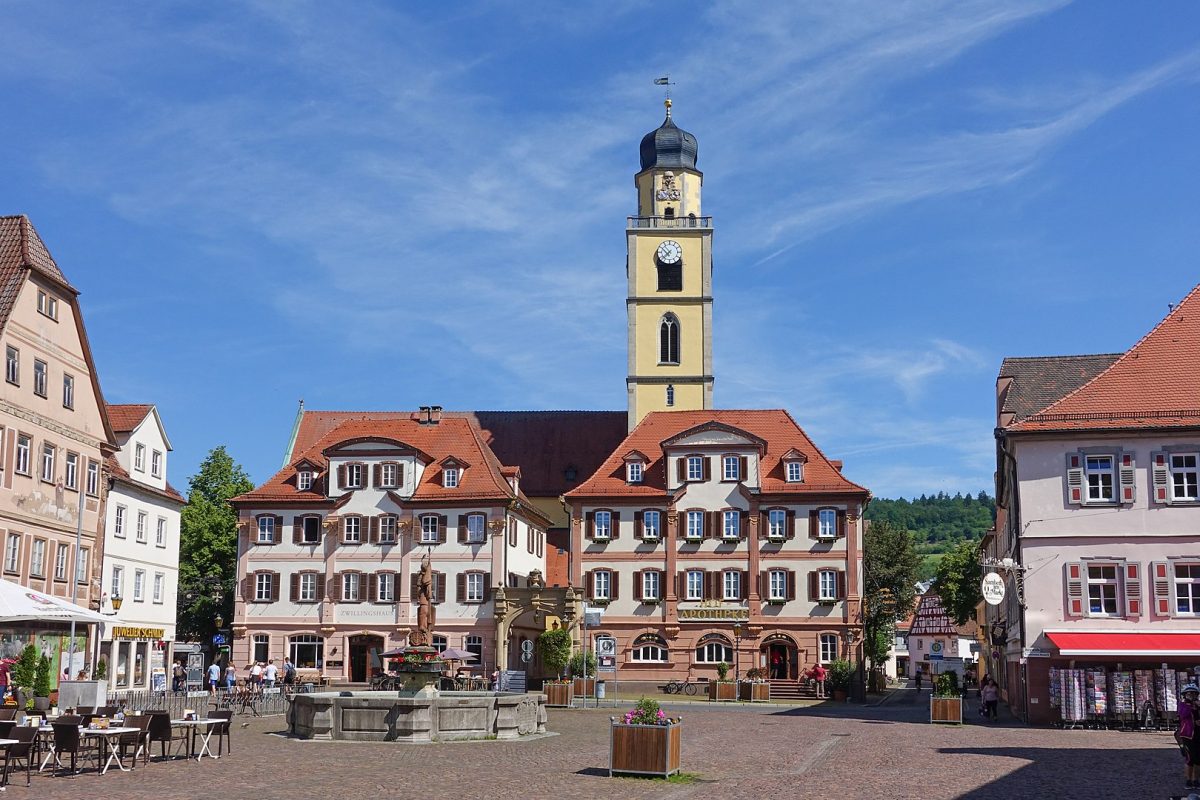 A spa town with a lot of historic architecture. Walk the charming market square (Marktplatz). Admire the medieval grand castle of Deutschordensschloss. See the remarkable artwork in Stuppach Church and Marienkirche. 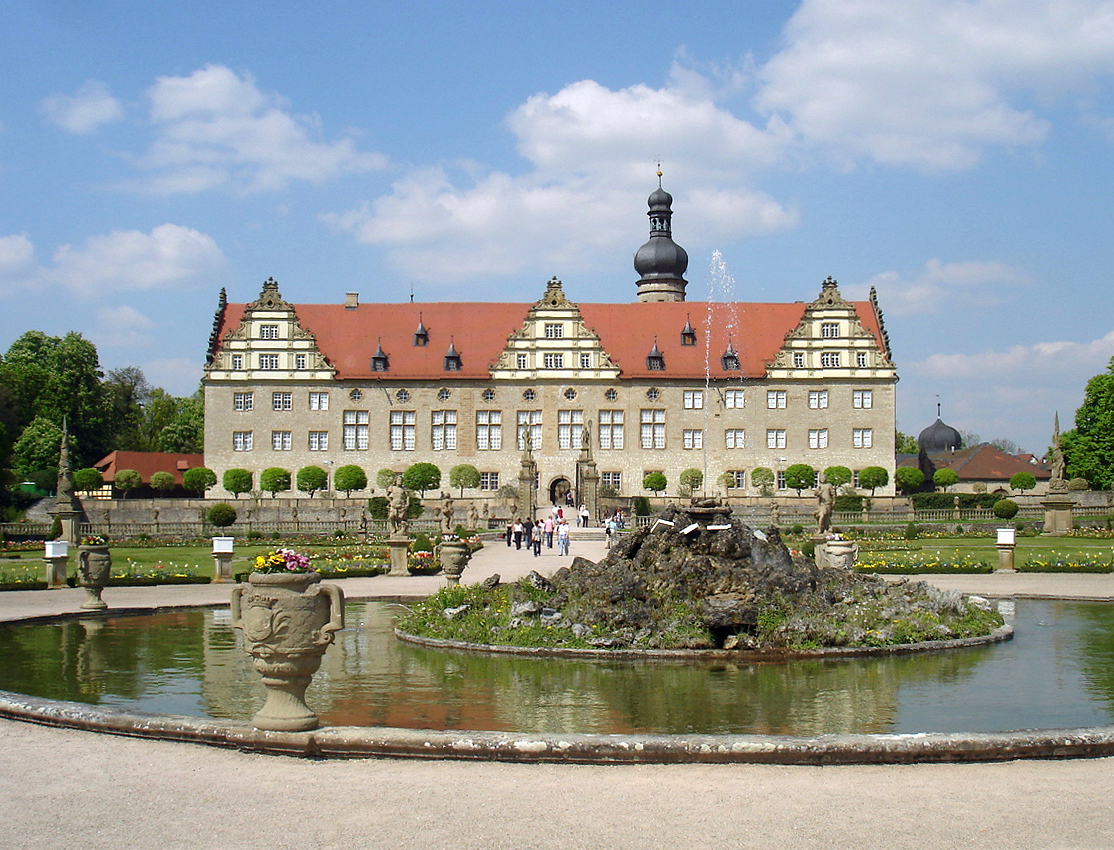 The gorgeous Weikersheim Castle (or Weikersheim Palace) was once a royal home. Enjoy the extravagance of the Great Hall and the other rooms. Walk the glorious Baroque garden and see numerous fascinating statues. There is also a double-winged, arcaded orangery. 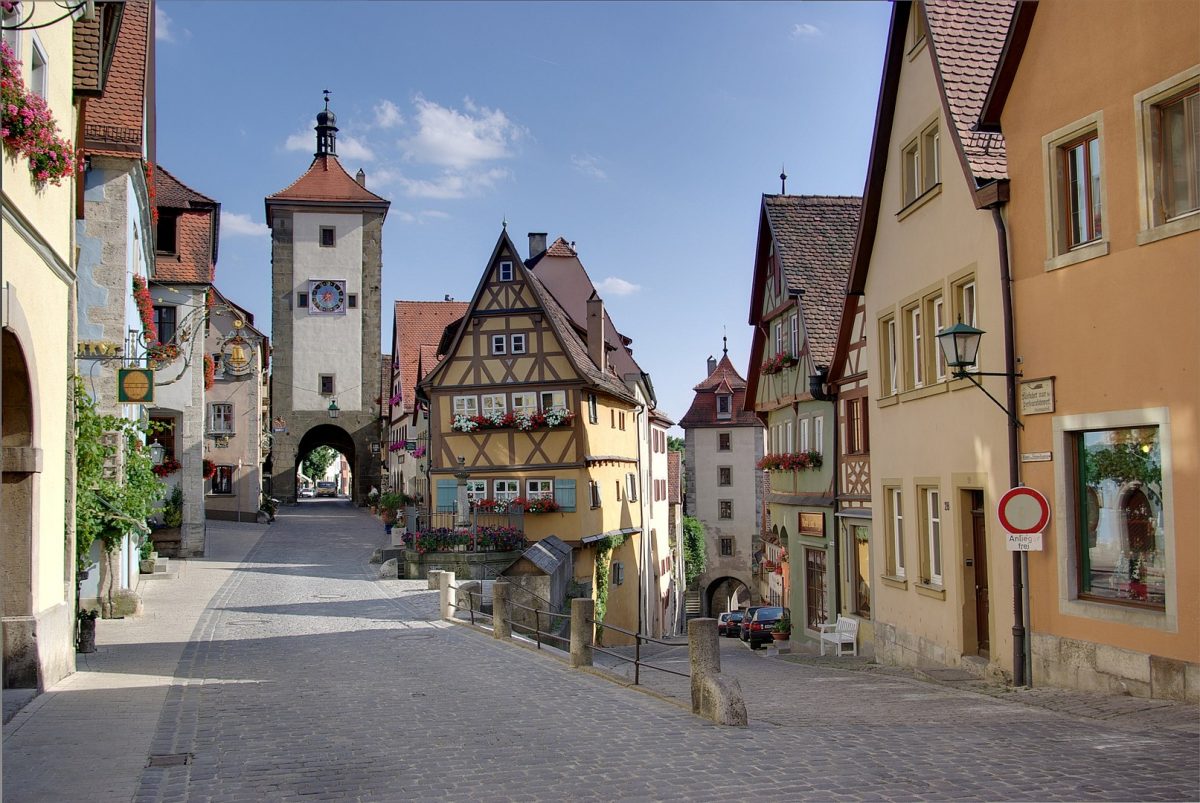 The old town of Rothenburg ob der Tauber has plenty to offer. There are numerous beautiful medieval buildings. Admire the old town hall, the old smithy, the colourful houses, the monastery, the Tauber Bridge and the several churches. Do not miss the Toppler Castle, the remains of the town wall and the Altes Brauhaus. There are also plenty of museums. Visit the Craft House, Imperial Museum and Doll and Toy Museum. Experience Christmas at the Christmas Museum throughout the entire year. According to many, it is the most picturesque town on the Romantic Road.

See What Germany Looked Like In The Middle Ages In Dinkelsbühl 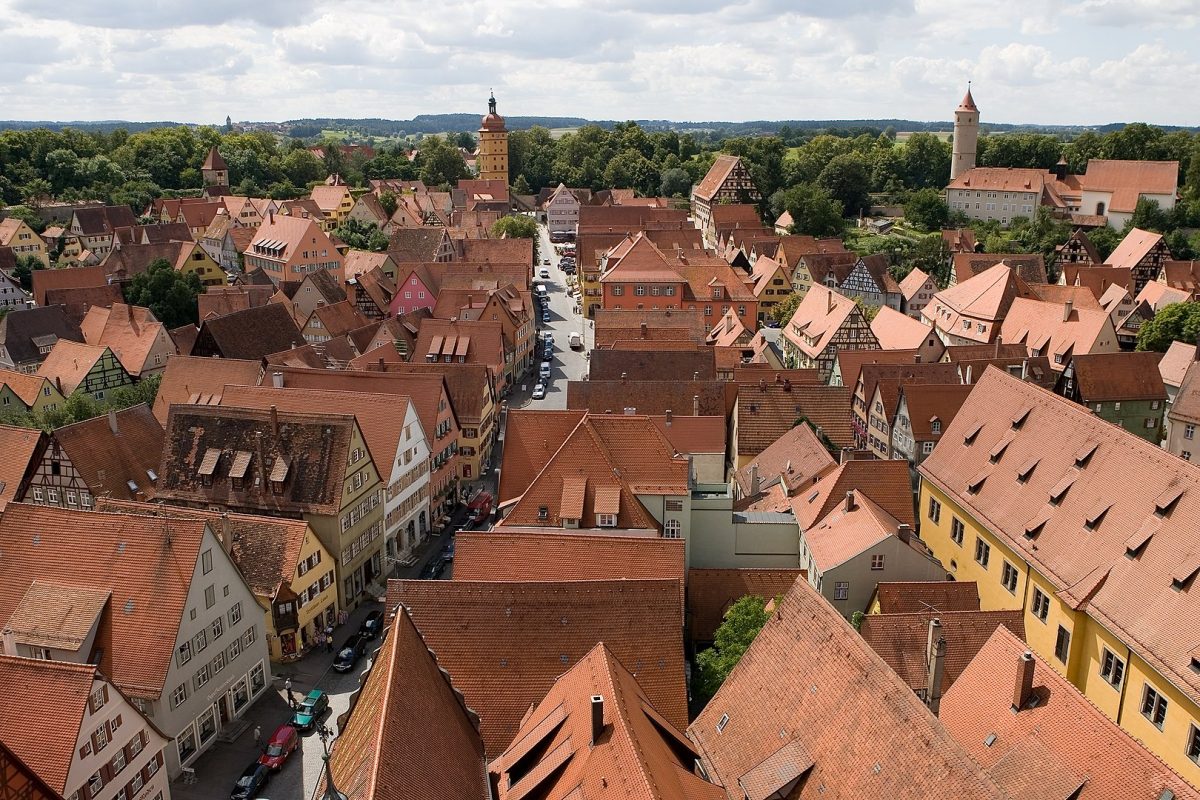 Dinkelsbühl is surrounded by an old medieval defensive wall and grand towers. Learn more about the area’s past at the Deutsches Haus and the Museum of History. Walk the picturesque streets and admire buildings like St. George’s Minster and St. Paul’s Church.

Walk The Medieval Walls Of Nördlingen 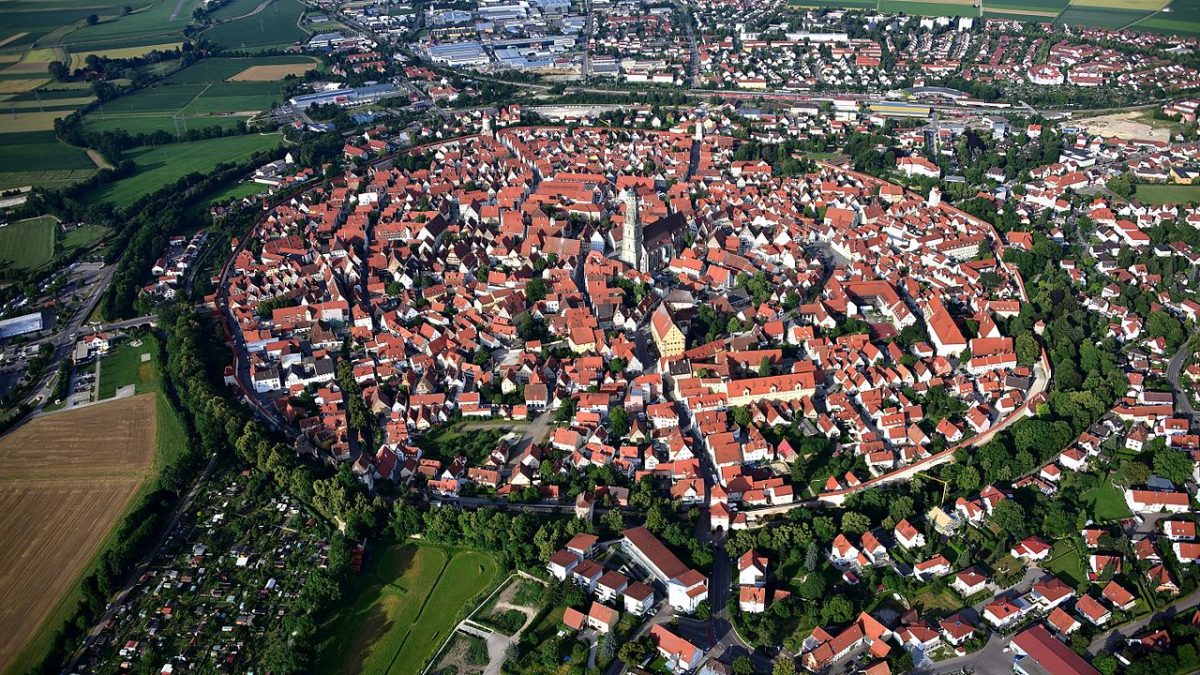 Nördlingen is another picturesque town on the Romantic Road, in which the medieval walls are still intact. Walk up the 350 steps to the top of the steeple (called Daniel Tower) of the St. George’s Church and enjoy breathtaking panoramic views of the town and the surrounding countryside. Visit the Bavarian Railway Museum, the Ries Crater Museum and Stadtmauermuseum. Walk the tanner’s quarter and see the Spital, a medieval old hospital.

Do Not Miss Donauwörth 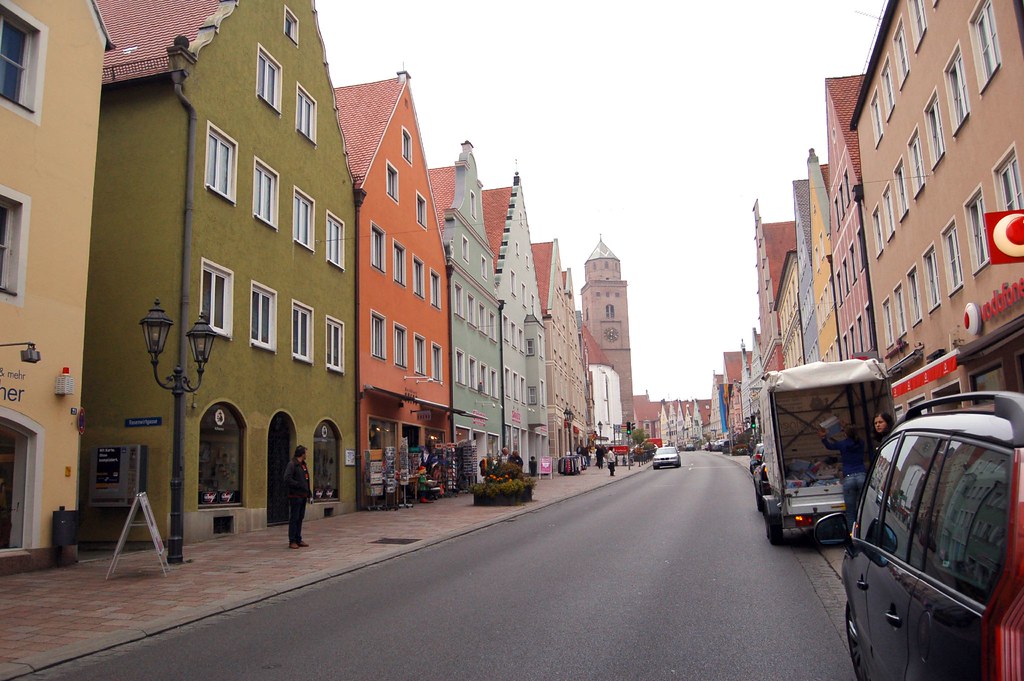 Donauwörth lies at the confluence of the Danube and Wörnitz rivers. The town is an excellent base for hiking in the surrounding areas. A visit to the Kathe-Kruse-Puppen-Museum is a must. There are more than 150 dolls and puppets on display, along with the tools to make them. Walk the charming Reichstrasse and visit the Monastery of the Holy Cross too.

Visit The City Of Augsburg 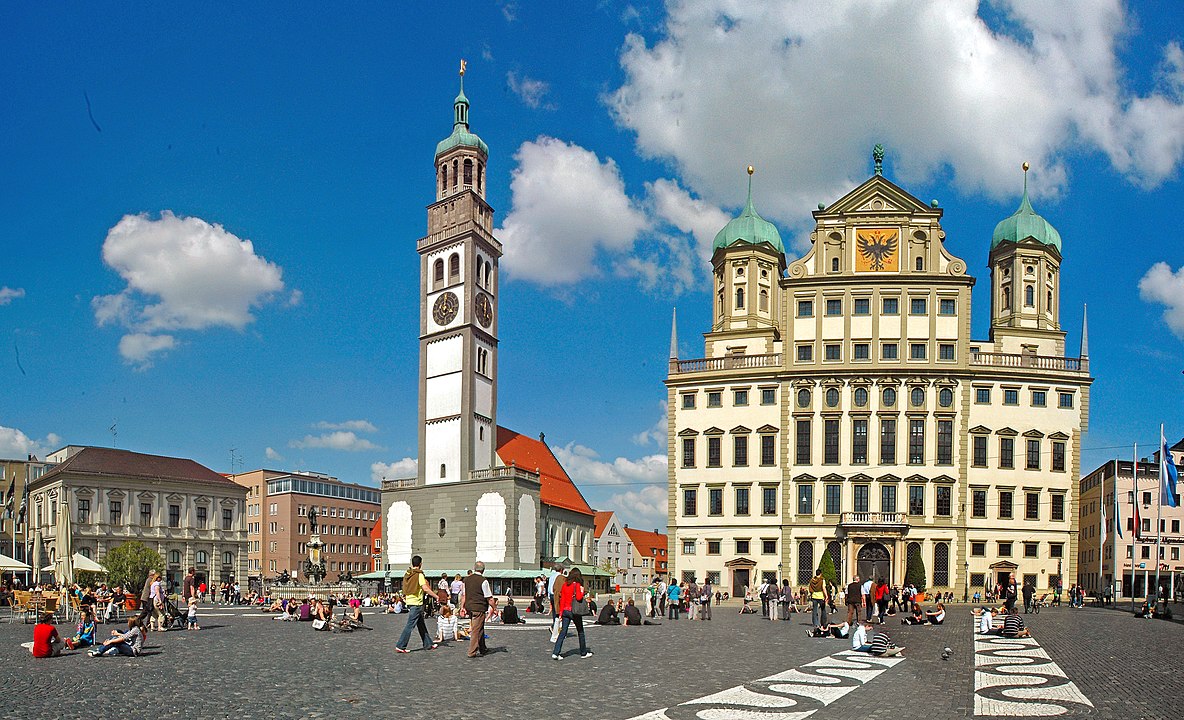 Photo by Guido Radig CC BY 3.0 (from Wikipedia)

Augsburg is one of Germany’s oldest cities. During the medieval period, it was one of the richest communities. Now, it is the largest city on the Romantic Road. Do not miss the Mozart Haus (where composer’s father Leopold Mozart was born and Mozart visited it several times), the Roman Museum, the old town hall and the Fuggerhäuser (Fugger houses).

In Augsburg, you can also see the world’s oldest social housing complex, the Fuggerei, founded in 1513 by Jakob Fugger and still inhabited by a few people.

Enjoy The Scenic Views From Landsberg Am Lech 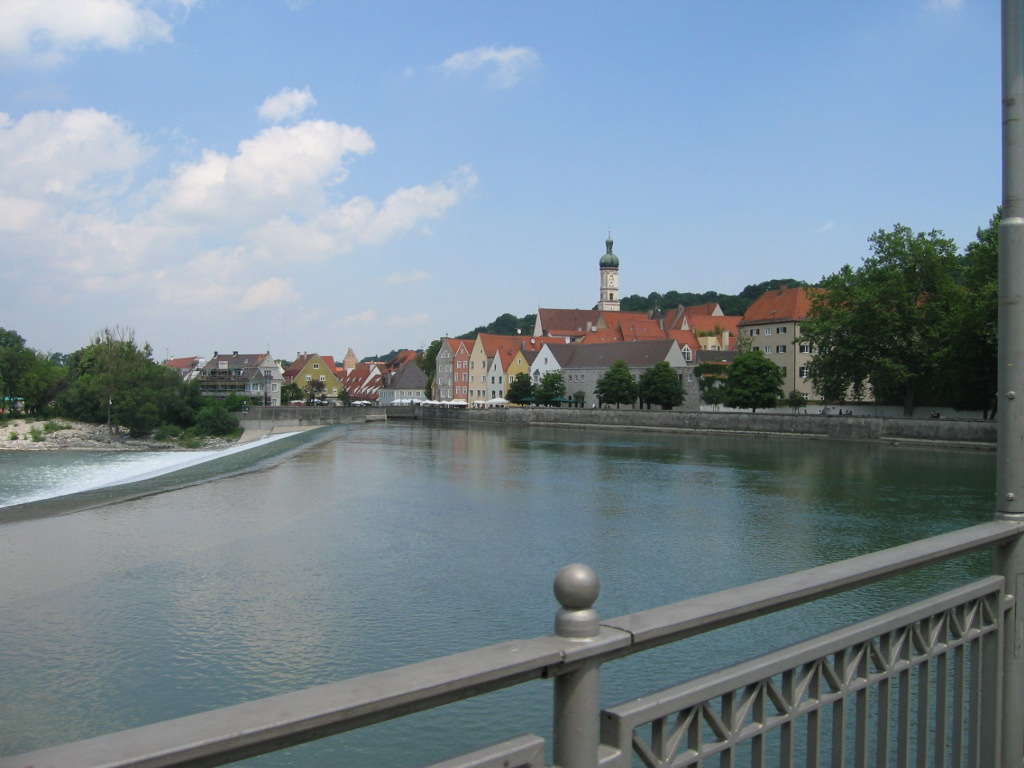 Just sit on the banks of the Lech River and admire the scenic river views. The old town’s colourful buildings add to the lovely views.

The Neuschwanstein Castle – A True Inspiration 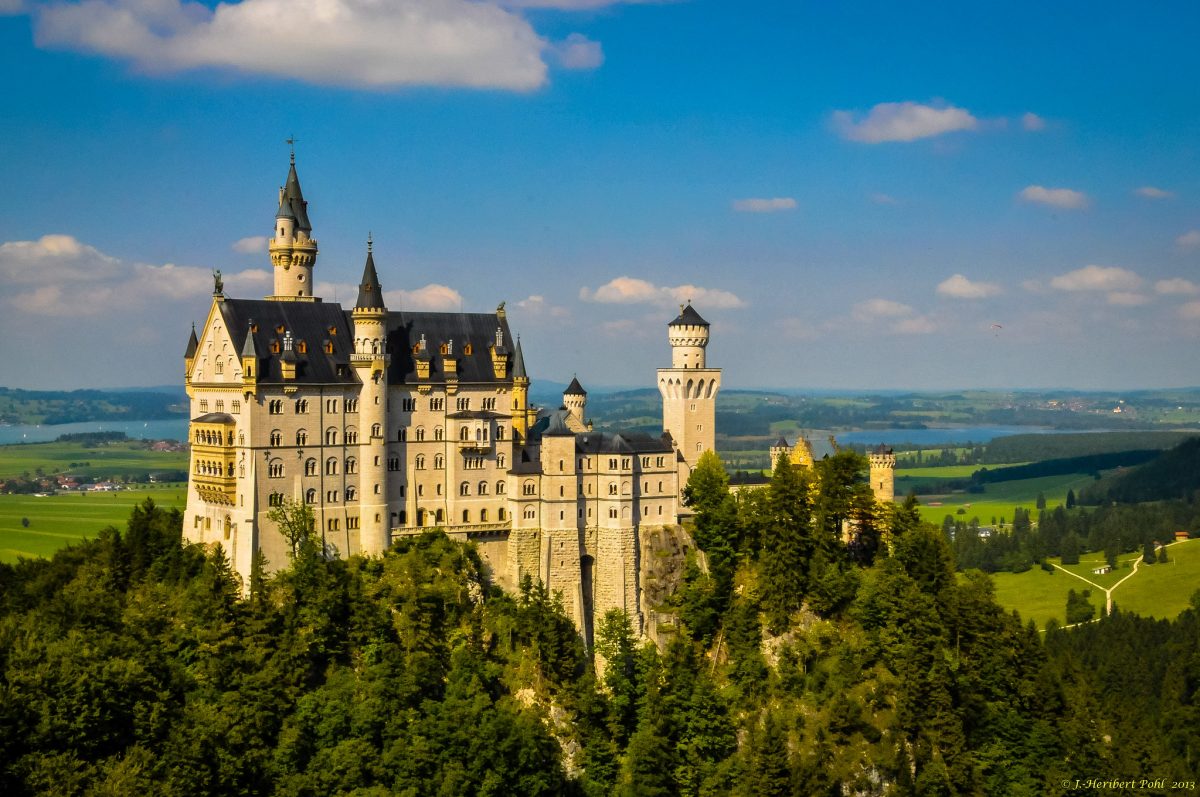 The jewel of the Romantic Road is certainly the glorious Neuschwanstein Castle, which dates back to the late 1800s. It is positioned on a rocky hill surrounded by lush greenery above the small village of Hohenschwangau (where you can visit the lovely Hohenschwangau Castle) near Füssen. The Neuschwanstein Castle without a doubt will leave you speechless. This magical castle was the inspiration for the Sleeping Beauty Castle created by Disney. From the grand walls rise mighty turrets and towers. The interior is extremely impressive too.