India is a country rich in heritage, culture, and architecture, and the Mysore Palace is one fine example. Also known as Amba Villas palace, it is an opulent mansion that stands in testimony to its rich cultural heritage. It is also one of the largest and talked about royal palaces in India.

The city of Mysore is located at the foothills of Chamundi Hills in the state of Karnataka. Moreover, Mysore is touted for being one of the cleanest cities in India. Besides, the Mysore Palace is the prime attraction for tourists in the city. Thus, if you are visiting Mysore, your trip is incomplete without a visit to this amazing tourist destination.

This majestic palace is one of the finest architectural marvels in India. But before you visit this visual treat, read all about this amazing place from its glorious past to present-day fame. I’ve also mentioned a few places to visit in Mysore, so you’ll have plenty on your travel platter. Here you go!

A Brief History Of Mysore Palace 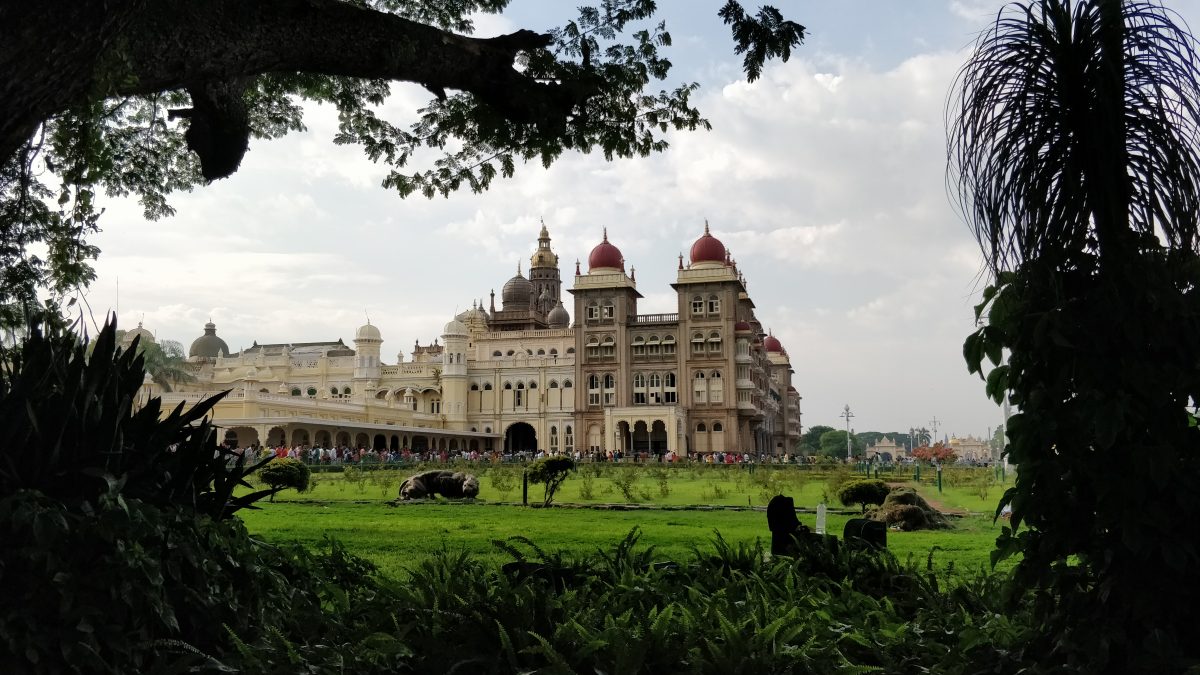 The original foundation of the Mysore Palace dates back to 14th century, by the royal family Wodeyars or Wadiyars. As per legends, it was Yaduraya Wodeyar, the first Wodeyar ruler, had built a palace at the current site. In the course of time, this palace was rebuilt from the ground up, repeatedly, for over six centuries. 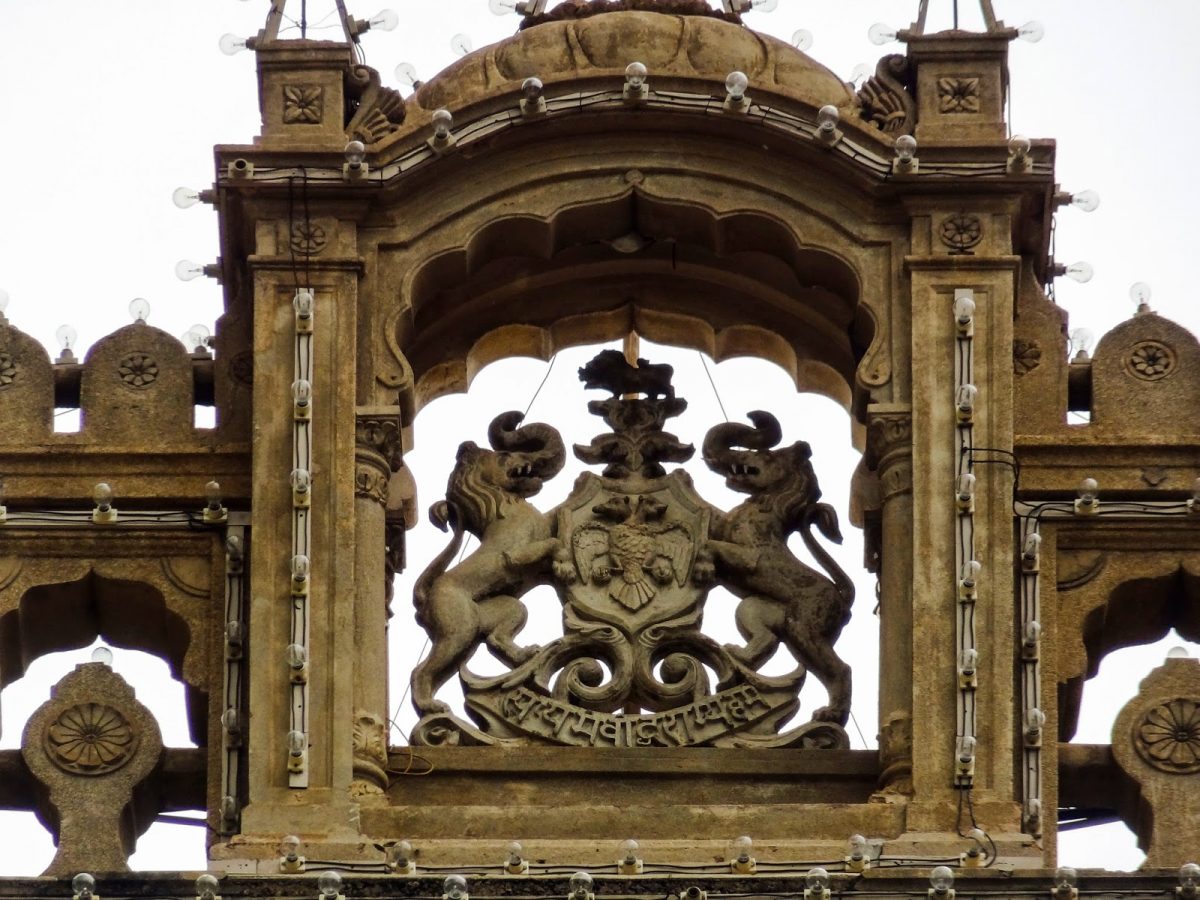 Again in the nineteenth century, the palace survived a fire, during the marriage of the daughter of Mysore Maharaja. The Maharaja then commissioned Henry Irwin, the British architect to rebuild the Mysore Palace. Henry Irwin completed the project in 1912, and the present-day palace is the masterpiece he created. Only the Public Durbar Hall wing is a later addition.

The Grandiosity Of Its Architecture 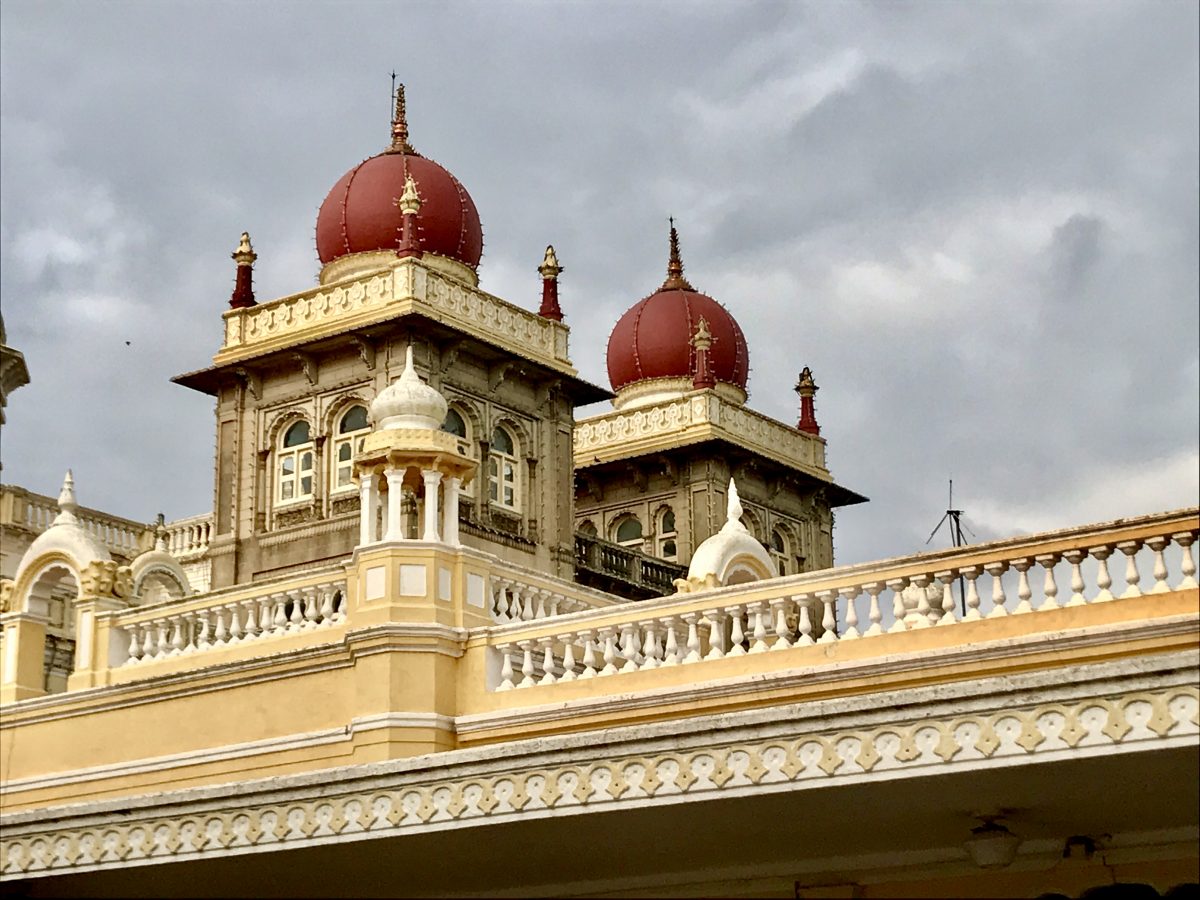 The Mysore palace will make you crave royal life like never before. Built on the lines of Indo-Saracenic architecture, it’s a decent blend of Gothic, Hindu, Mughal and Rajput styles. It has fine deep pink marble adorning its domes, while grey marble has also been used extensively.

Plus, you’ll come across multiple arches, canopies, durbars, columns, etc which are all intricately designed to perfection. The stained glass ceilings, glazed flooring, are also worth a mention. Besides, the opulent chandeliers and exquisite furnishings seem beyond this world. You might fall in love with the Czechoslovakian chandeliers.

Another interesting fact about this awesome palace in India is that it faces the Chamundi Hills. That’s because the Mysore Maharajas have been devotees of goddess Chamundi. But all in all, its simply one of the greatest places to visit in Mysore.

Things To Do In Mysore Palace 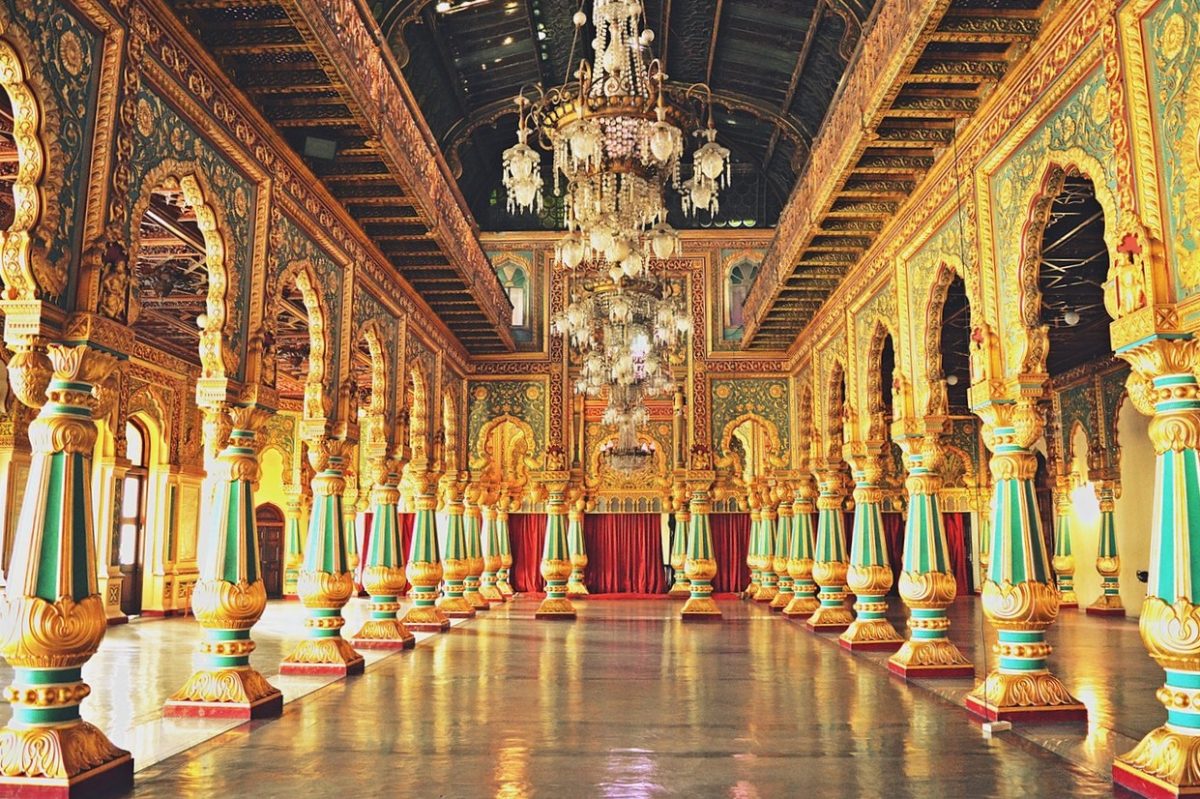 There are plenty of things to do in Mysore Palace, and probably that’s why it’s visited by millions of tourists year after year. The entrance corridor has some of the most amazing Indian and European artefacts.

Besides, there are a number of temples, rooms, courtyards, balconies, etc, with each being more splendid than the other. However, no photography is allowed inside the premises. Though your mind will never forget the exquisite beauty that your eyes will feast on.

Get Excited By The Fervour Of Dussehra Festival

Dussehra or the Vijay Dashmi is the festival that celebrates the victory of good over evil. But unlike the rest of India, it has a special place in Mysore and is celebrated for ten whole days. The main attention-grabbers are the elephants that march during this fest on the streets of Mysore.

Inside the palace, a special ceremony is partaken by the royal family and their guests. Besides, the entire Mysore Palace is bathed in lights and becomes a sight to behold. As per tradition, the royal sword is taken out on a procession, on the second last day of celebrations. 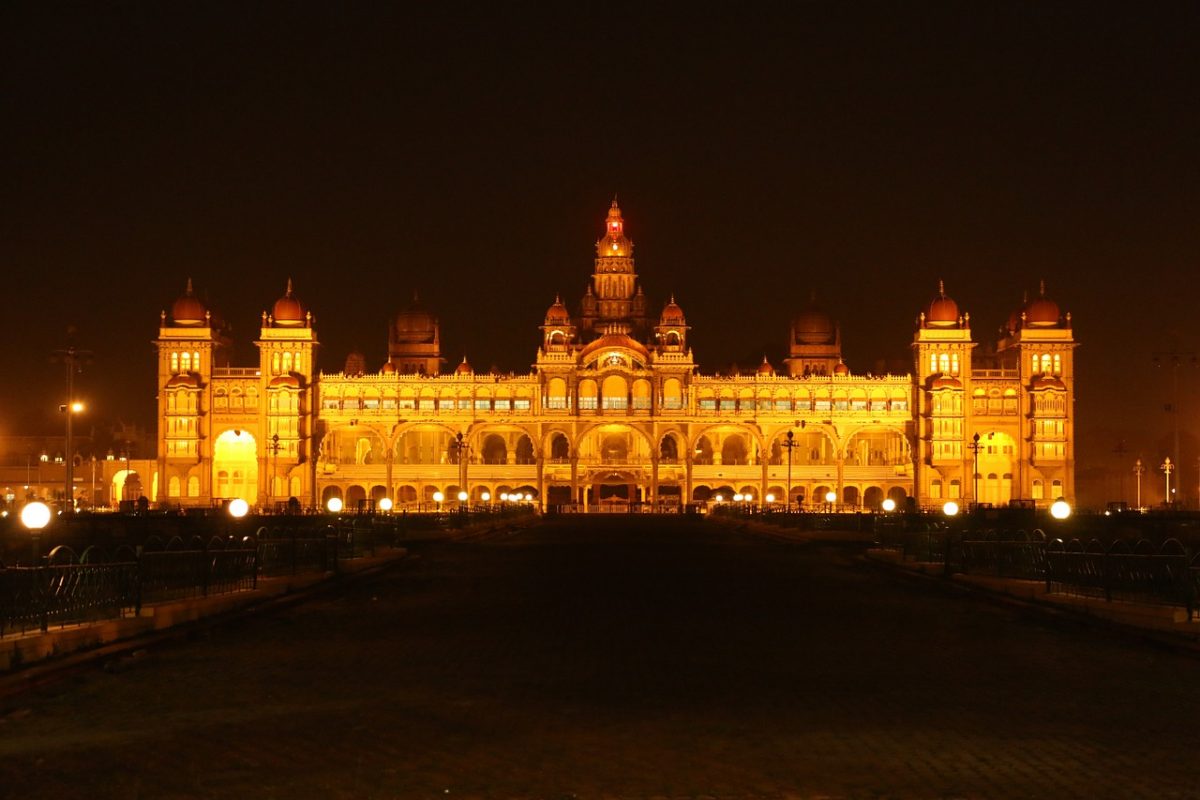 Image by abhijit1540 from Pixabay

All tourists are smitten by the awesome light and sound show that portrays the history of Mysore Place. One of the best royal palaces in India, this show is usually houseful. In addition, its held every day, except Sundays for around 45 minutes.

Adore The Amazing Collection Of Dolls At Gombe Thotti

The main gate of the palace is adorned with traditional dolls and carved elephants, embossed in gold. The name of this gate is Gombe Thotti or the Doll’s Pavillion. While whenever the facade is illuminated in thousands of lights, it’s hard not to fall in love with it.

Get Spellbound By The Darbar Hall 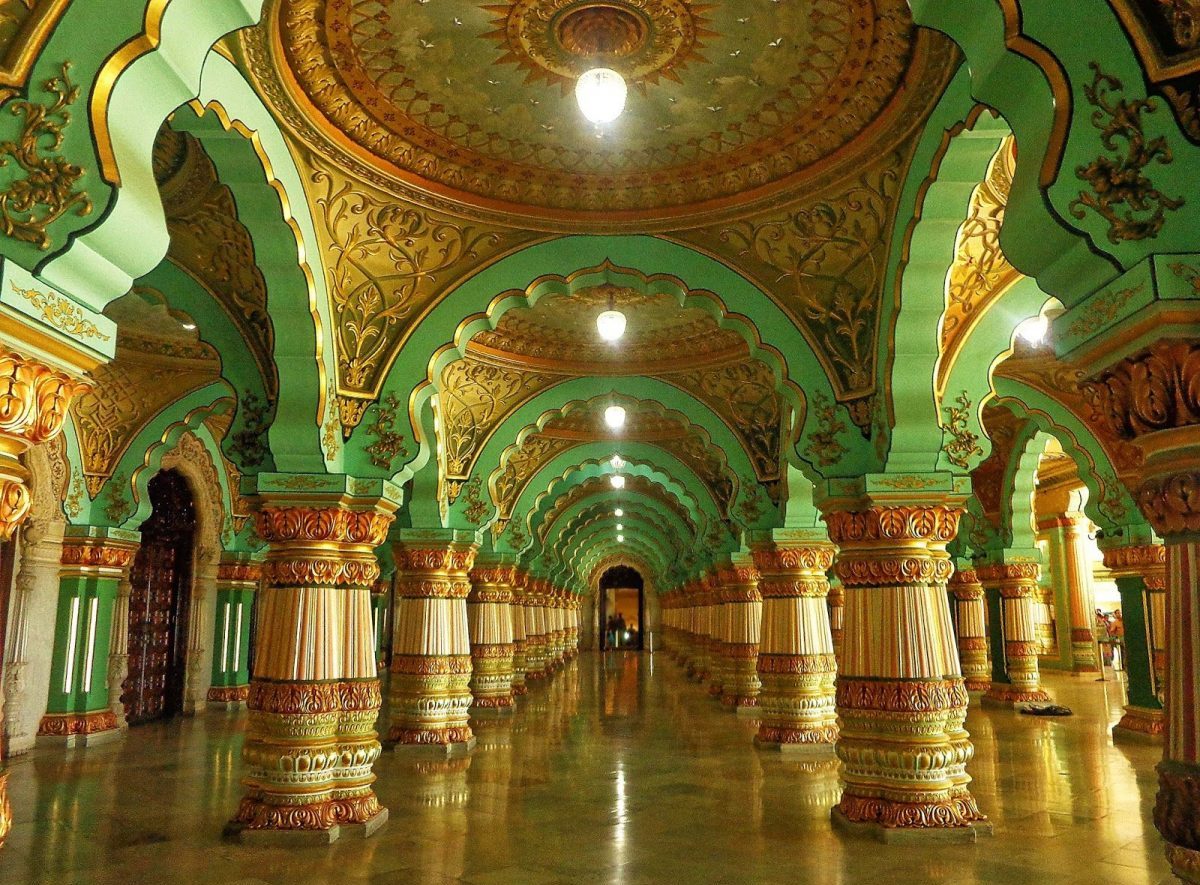 In the kingdom of Mysore, the Darbar Hall was the place where the Mysore Maharaja addressed the public. Feast your eyes on the beautiful hues of pink, turquoise, yellow, and whites. Besides, its walls are host to some of the most regal paintings.

Be Overwhelmed By the Luxury Of Ambavilasa 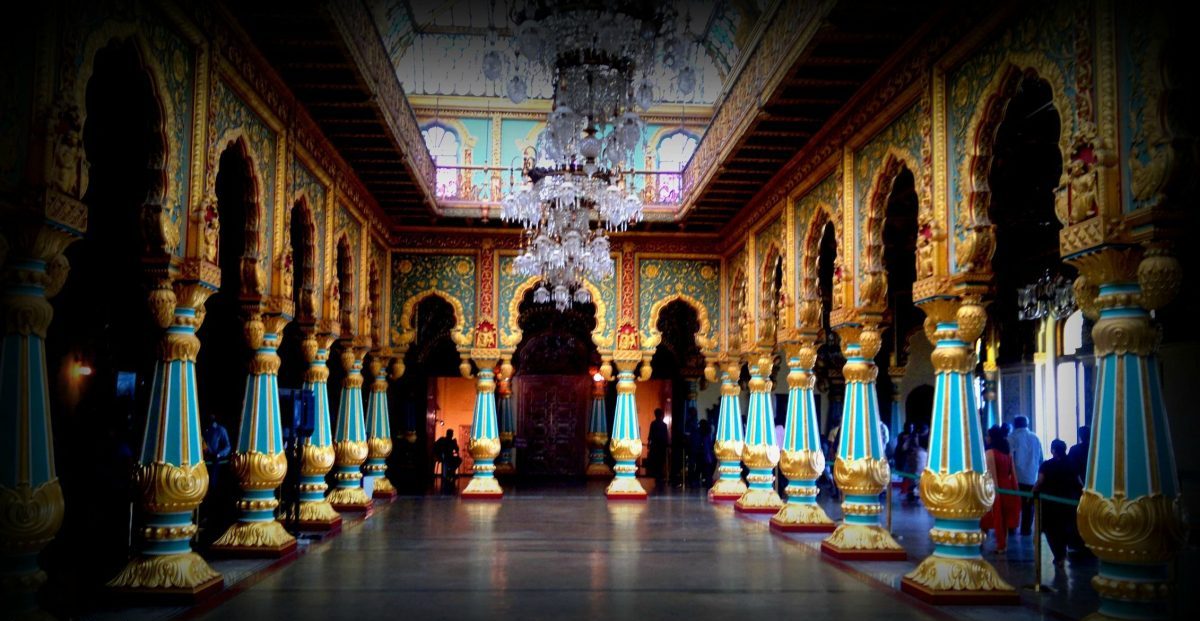 Another hall in the palace, this one is an epic highlight of this astounding Mysore attraction. Every nook and corner of the Ambavilasa Hall is bathed in gold, ivory, and everything majestic.

Lose Yourself At The Kalyana Mantapa 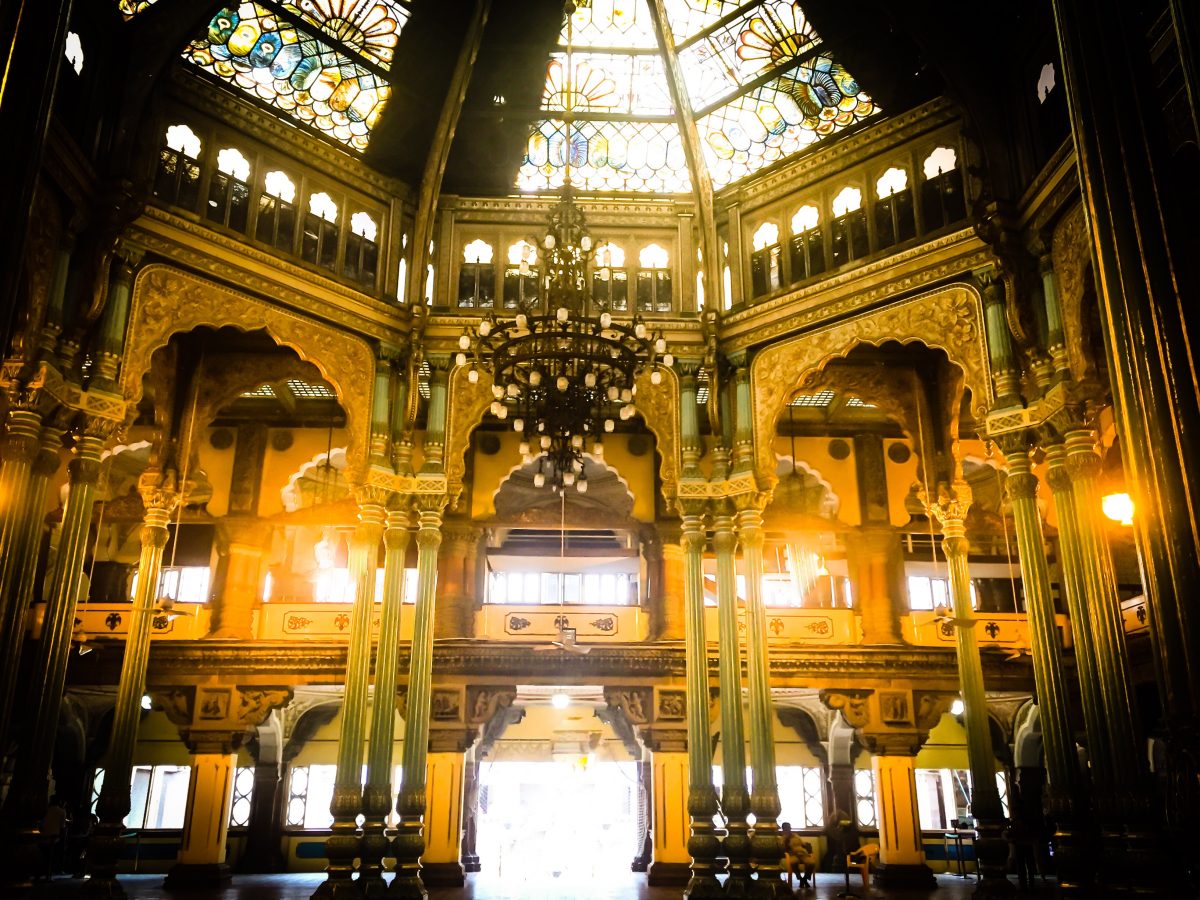 A traditional marriage hall, this place has hosted multiple royal marriage ceremonies. The last such ceremony was held, just back in 2016. Its octagonal shape and stained glass ceilings and the floors with peacock motifs will leave you in some fantasy world.

Places To Visit Near Mysore Palace

From the days of the Kingdom of Mysore till date, the city has been adorned with many places that you must visit on your trip. These include the Dodda Gadiyaara, Badsha Bazaar and the Devaraja Market. While if you are willing to go little further, Philomena church, Karanji Lake, Railway Museum, etc are some amazing attractions.

How To Get To Mysore Palace? 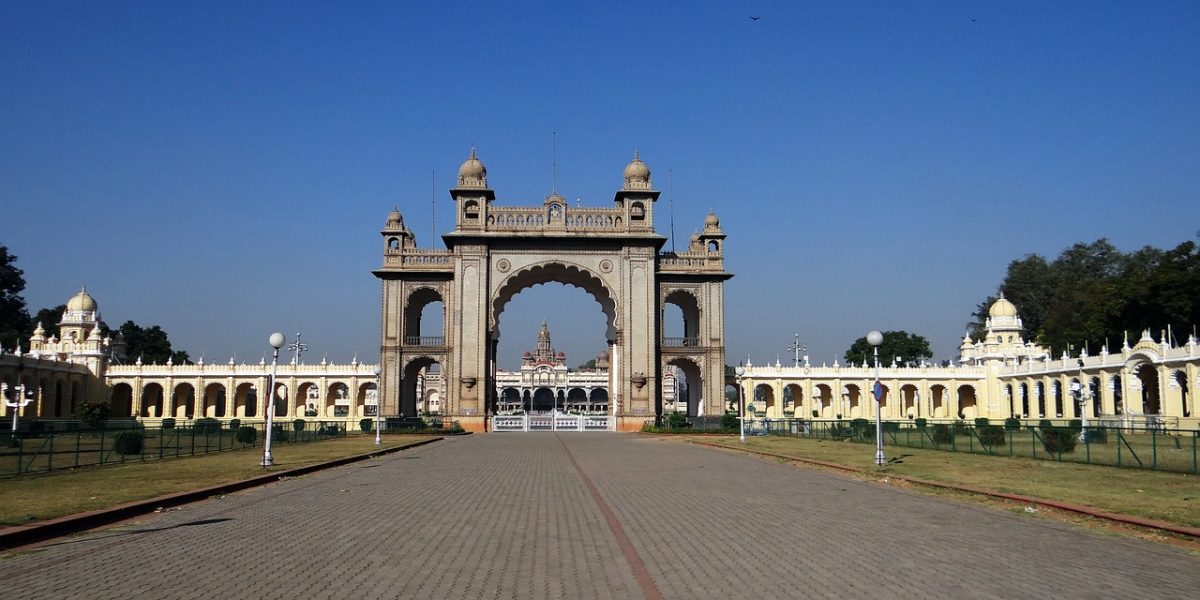 Image by Bishnu Sarangi from Pixabay

Mysore Palace is located in the centre of the city. Most commuters reach here via Bangalore since it has good connectivity by road, rail and air transport. Further, you’ll have to reach the Mufesal Bus stand, which is at a stone’s throw.

To reach here, either take a KSRTC bus ride or book a cab from Bangalore. Plus, if you require, you can also book an auto for reaching the Palace gates, instead of walking. 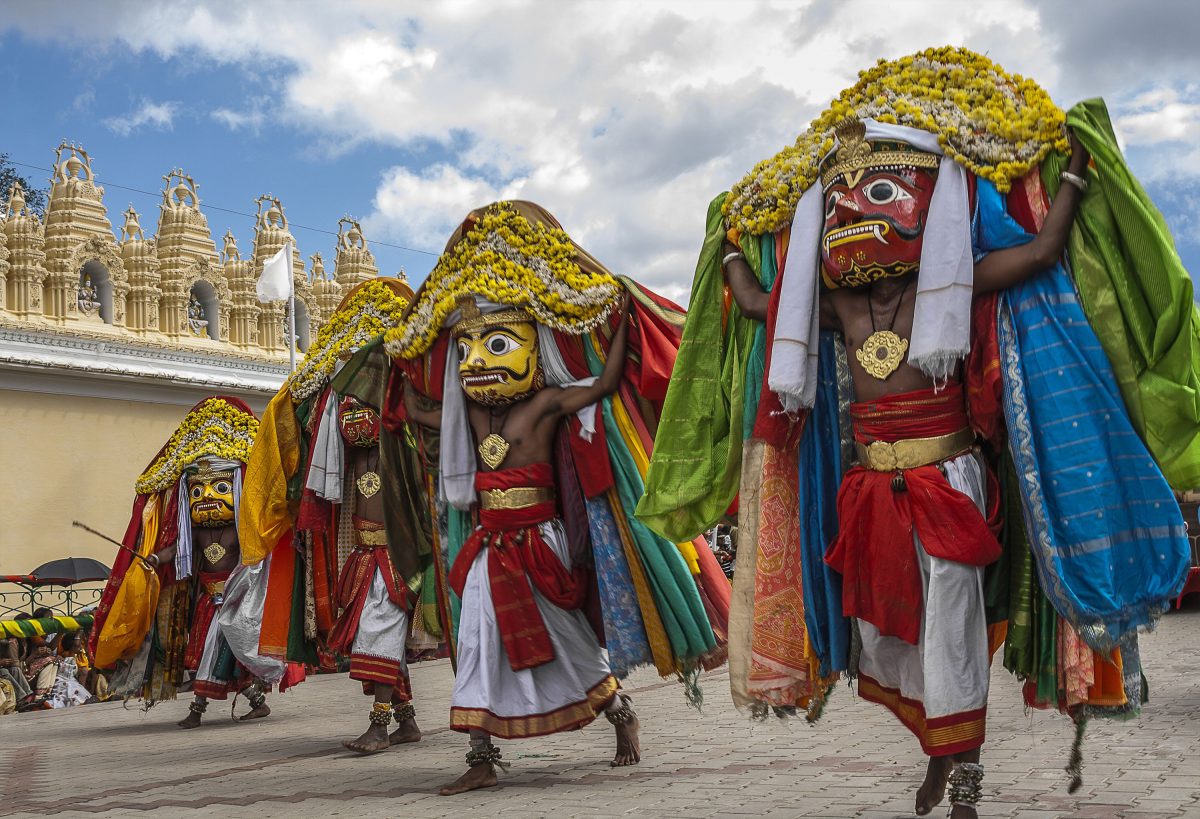 You may visit the palace all year round. However, the festival of Dussehra is the best time of the year to be at this royal palace. Though the palace gleams in lights on Sundays and other special occasions. But, the fervour during Dussehra knows no bounds.

This festival falls in the months of October or November. So check the calendars, before you plan your trip to Mysore Palace. You won’t wish to miss this opportunity!

The Mysore Palace is currently under the Government of India. However, it is still the official residence of the Wodeyar family, and usually brimming with royal guests. Besides, the current Mysore Maharaja is Yaduveer, an MIT graduate. One of the few remaining royal palaces in India, it’s a visual surprise for one and all. Are you ready for the trip?