Dolmabahce Palace in Istanbul is an opulent royal villa, that stands as a prime emblem of the great Ottoman rule. Touted as the most extravagant palace in the world, its yester glory is still unimpaired. Studded with countless precious gemstones, gold, and whatnot, there’s a richness in every nook and cranny of this historic palace.

Moreover, it houses some of the outrageously expensive Doma furnishings, artefacts, and decor that’ll surely make your jaw drop. Besides, it has 285 rooms, 46 halls, and 6 baths, all dripped in luxury. So, brace yourself to feast your eyes and soul with the most fantasizing views, that seems beyond the human realm.

Also known as the Dolmabahçe Sarayı, it served as the palace as well as the administrative centre of the empire. While the name, Dolmabahcestands for ‘filled-in garden’. Built on one of the picturesque bays of Bosphorous Strait. So there’s plenty to explore and indulge into at this amazing tourist attraction. Come, let’s explore a few.

A Little Brush Up With History Of Dolmabahce Palace 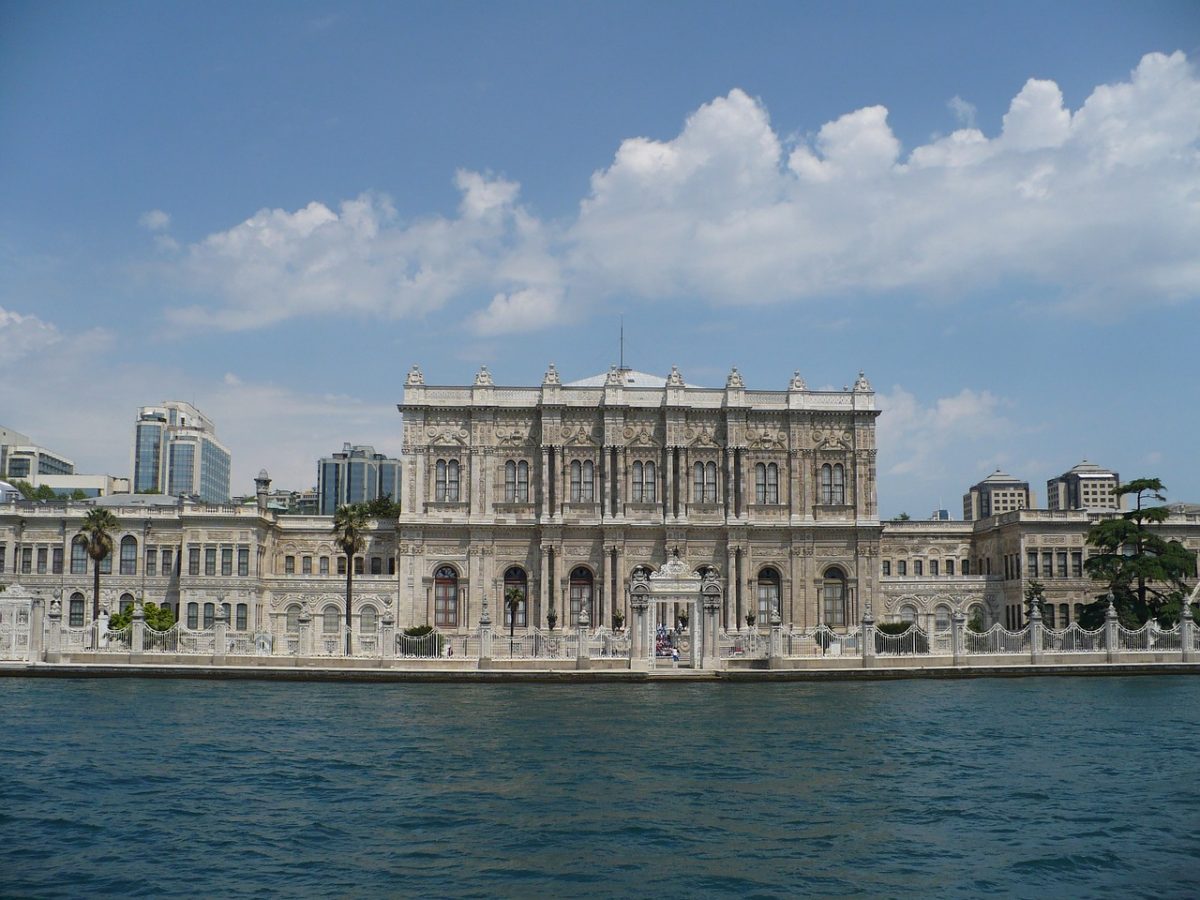 An Ottoman Architectural Marvel, its construction bill amounted to about $1.5 billion in today’s value. Scholars claim that this huge expenditure placed a lot of strain on the empire, which somewhat contributed to its downfall.

Dolmabahce Palace in Istanbul was commissioned by Sultan Abdülmecid, and took 13 years to complete. Karabet Balian along with his son were the chief architects of the Turkey Palace. In fact, five generations of the Baliyan family were chief court architects. And multiple structural marvels of the Ottoman Empire, in Istanbul (then Constantinople), are credited to this family. 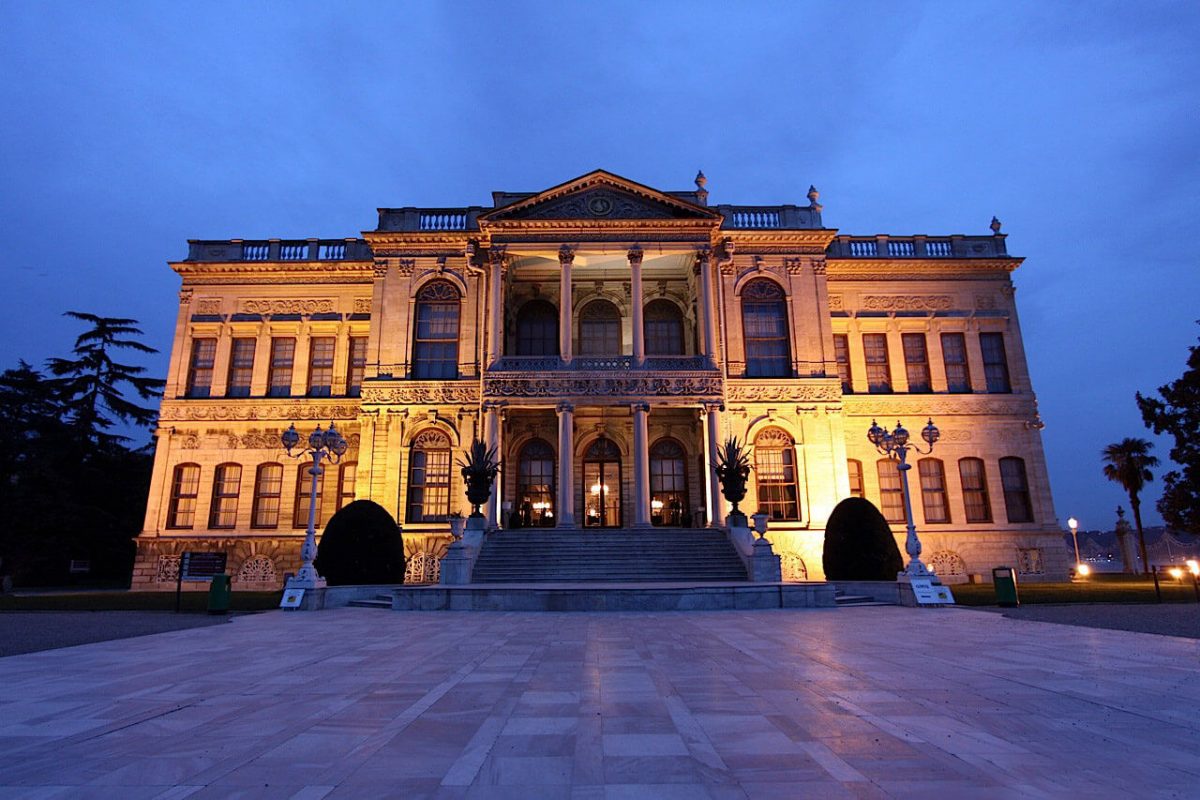 Dolmabahce Palace was home to six Turkish Sultans, until the fall of the empire in 1924. Later, it also served as the residence of the first President of the Republic of Turkey, Mustafa Kemal Atatürk. Since he died here, the palace has great significance for the Turkish population.

Things To Do Inside The Dolmabahce Palace 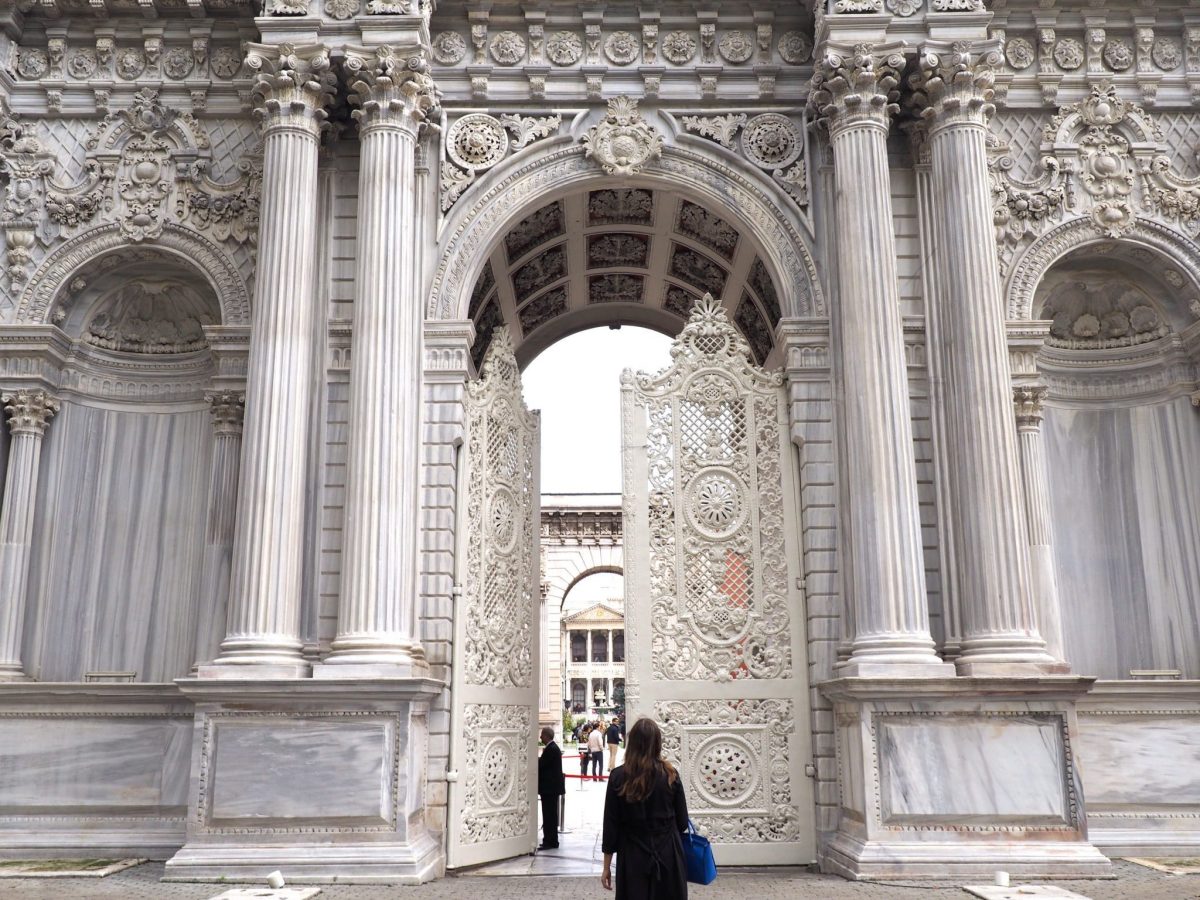 The design of the Turkey Palace embraces eclectic components of Baroque, Rococo and Neoclassical styles. Besides, these have been mingled with traditional Ottoman architecture to create a new synthesis.

The Palace floors also feature a large collection of Hereke carpets, which were naturally produced by the imperial Hereke Factory. Plus, you’ll also come across a 150-year-old real bearskin rug, which was a gift from Tsar Nicholas I to the Turkish Emperor.

However, there’s much more to visit and do here. The top six best things to do in Dolmabahce Palace are listed below. 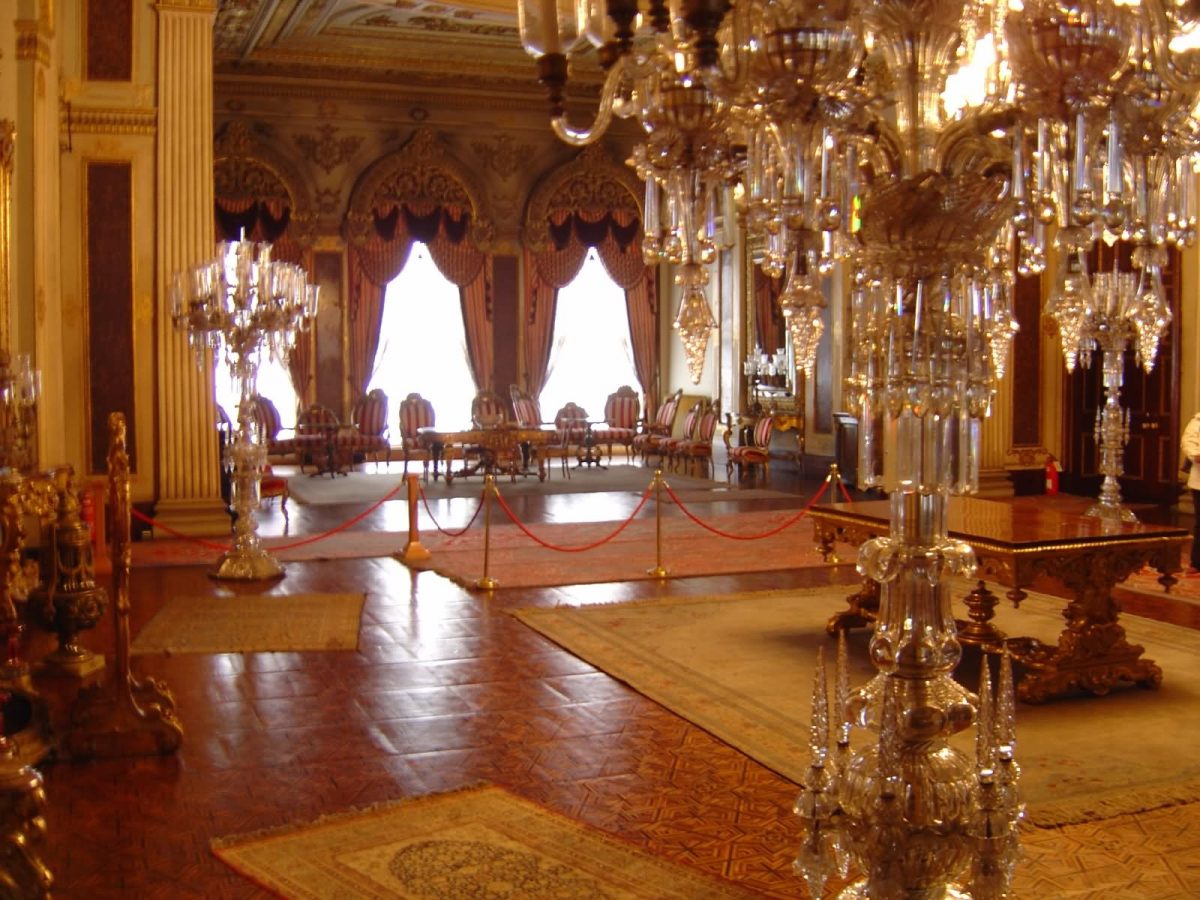 The main entrance of the Dolmabahce Palace in Istanbul, the Medhal Hall has a charming appeal. The rooms connected to the hall, are either sea-facing or land facing. Most of these were used by the empire’s administration. A striking feature of this hall is the lovely English chandeliers and Turkish lights.

Inside this royal hall, you’ll come across Boulle tables, which bear the monogram of one of the Turkish Sultans. Similar monogram can also be found on the fireplace. Besides, the Turkish Hereke fabrics have been put to use for the upholstered furniture. While the tall hanging draperies look chic in royal red.

Get Floored By The Beautiful Art Collection In Clerk’s Hall 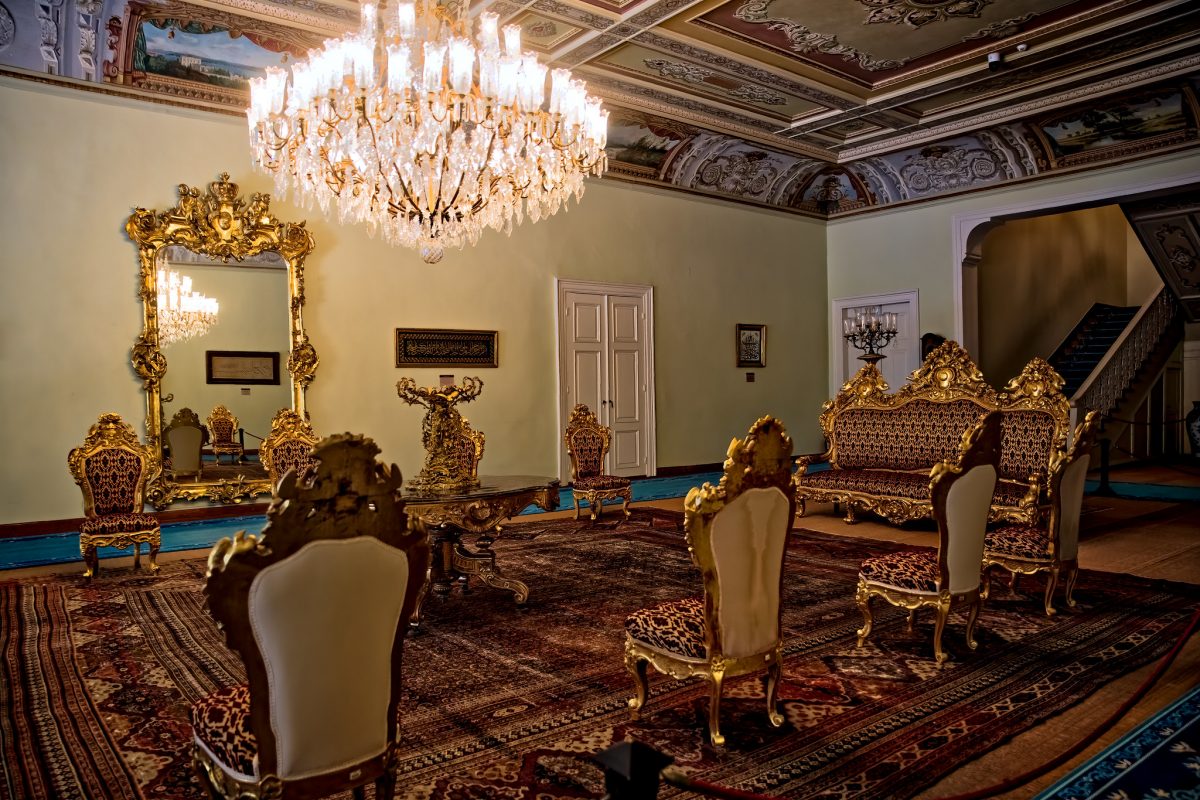 Also known as the Tiled Room, visiting the Clerk’s Hall is another amazing thing to do in Dolmabahce Palace. It has a priceless collection of ceramic vases, apart from some excellent French furniture.

However, the attention grabbers in the hall are the stunning paintings on its walls. One of them is the picturization of Surre Procession by Stefano Ussi. Others include paintings of a Dutch Village Girl by Delandre and Paris Municipal Theater fire by Rudolf Ernst.

Be Awed By The World’s First Bohemian Gold Chandelier 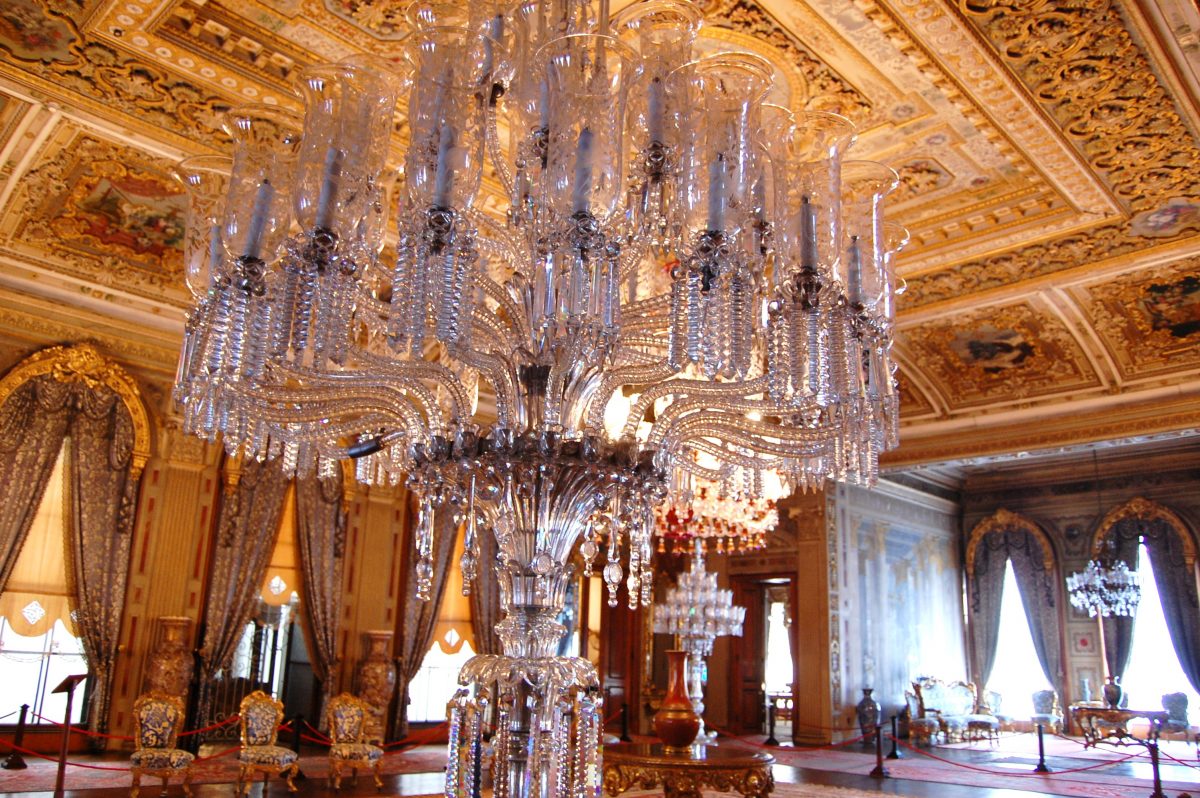 Yes, it exists, and yes it is quite an example of excellence. With 750 lamps its one of the main attractions in the palace. For the curious souls, it weighs around 4.5 tonnes. So no messing around!

This gold chandelier is said to be a gift from Queen Victoria to the Turkish Sultan. However, it was recently discovered that full payment was made for this chandelier. You will find it in the Ceremonial Hall.

Pay A Visit To The Atatürk’s Room 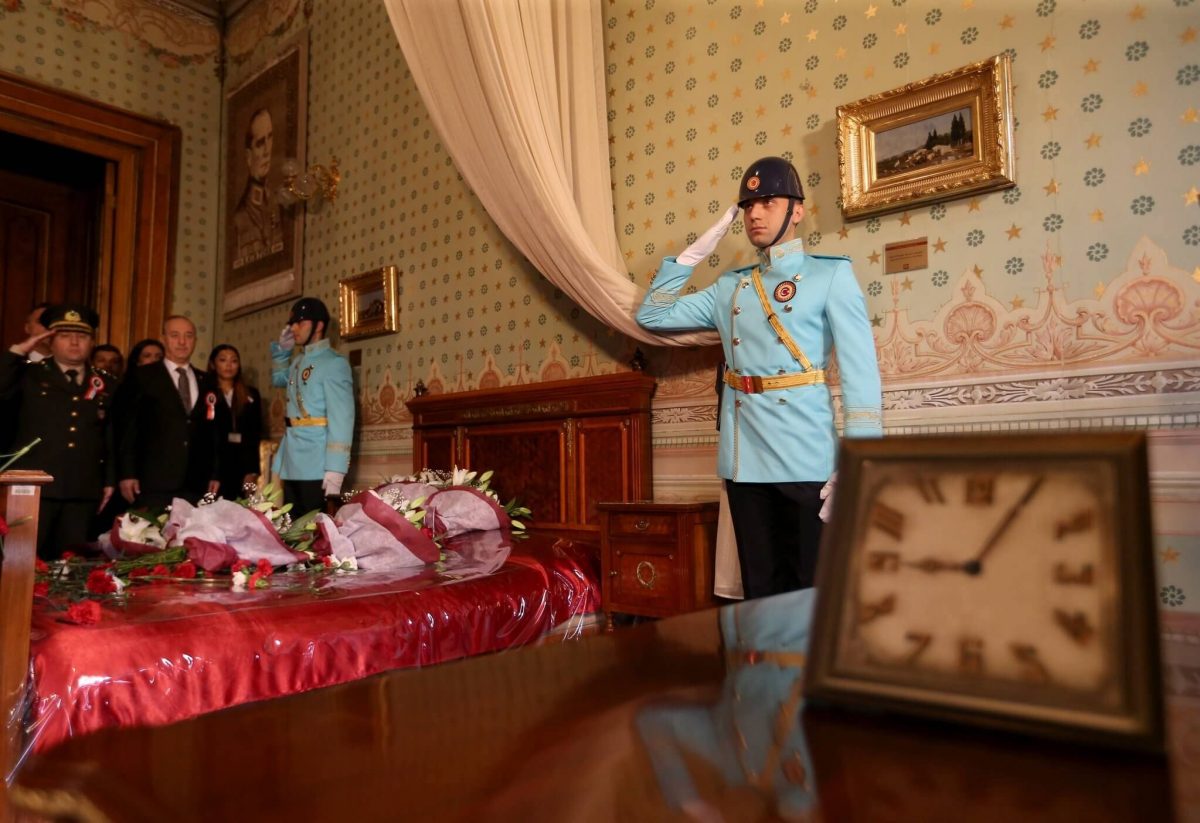 This is the room where Mustafa Kemal Atatürk, the founder of the Republic of Turkey, took his last breath. A revered leader, when he died at 9:05 AM, all the clocks in the Dolmabahce Palace were stopped. However, as of now, only the clock in the Atatürk’s Room stands still 9:05 AM. The rest run as per Turkish routine time. 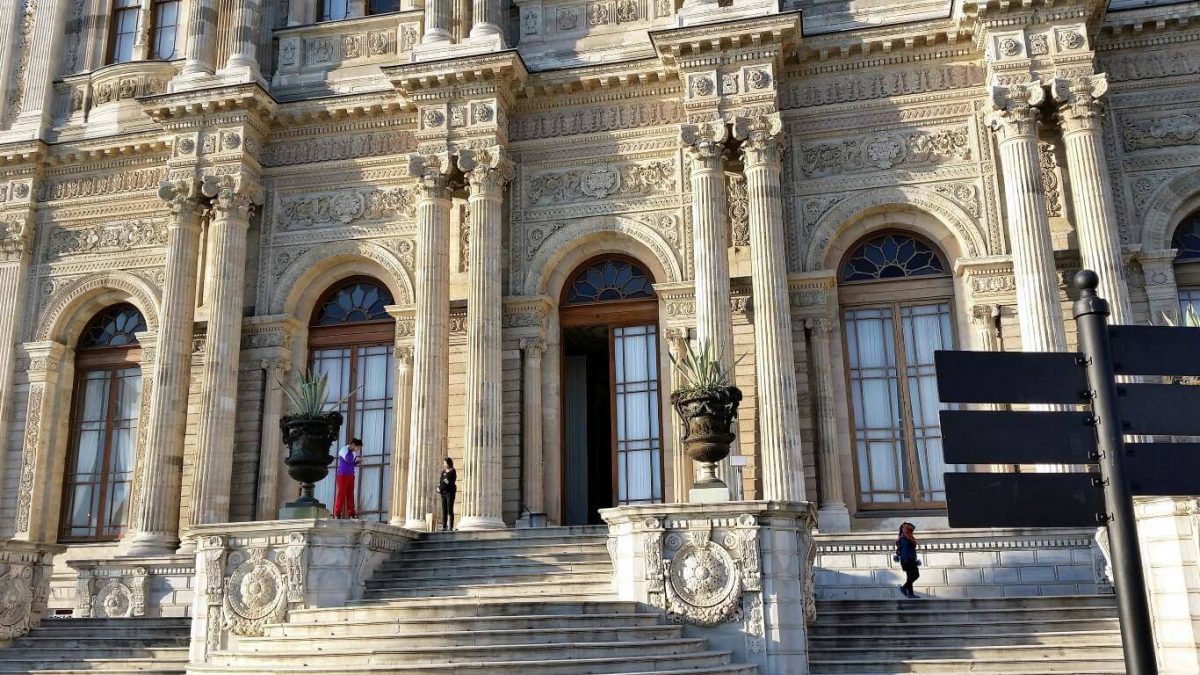 National Painting Museum in the Palace is adorned with some of the most exquisite oil paintings. Sufficient to make any soul feel artsy. There are more than two hundred paintings, with a majority of them being by Ivan Aivazovsky, a court painter. The other paintings are by prominent artists, including many internationally acclaimed painters. Yet, all are framed in gold.

Behold The Majesty Of The Palace Gates 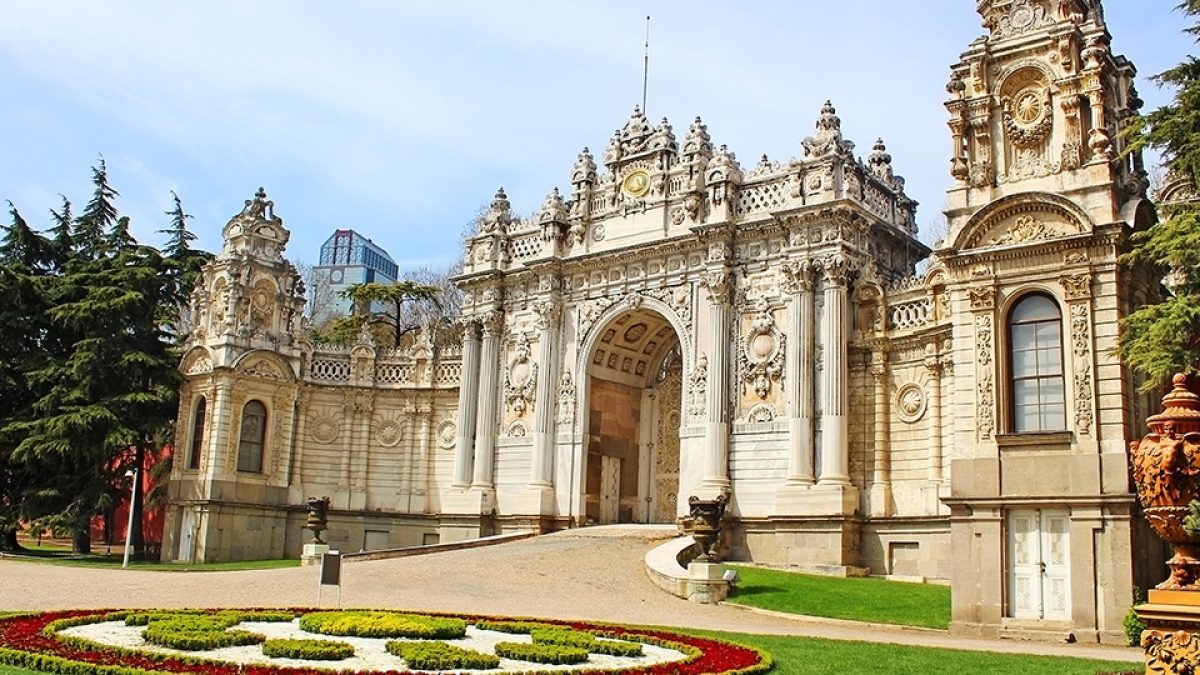 The three main gates that will take your breath away are the Gate of the Sultan, of the Treasury and that to the Bosphorus. The first two are grand, elegant and mighty, and worth clicking from every angle.

The gate to Bosphorous seems somewhat magical. Not too huge, or wide, it seems like nothing short of a doorway to heaven. I bet you’ll never ever forget the view in your lifetime. Doubt it? See it for yourself! 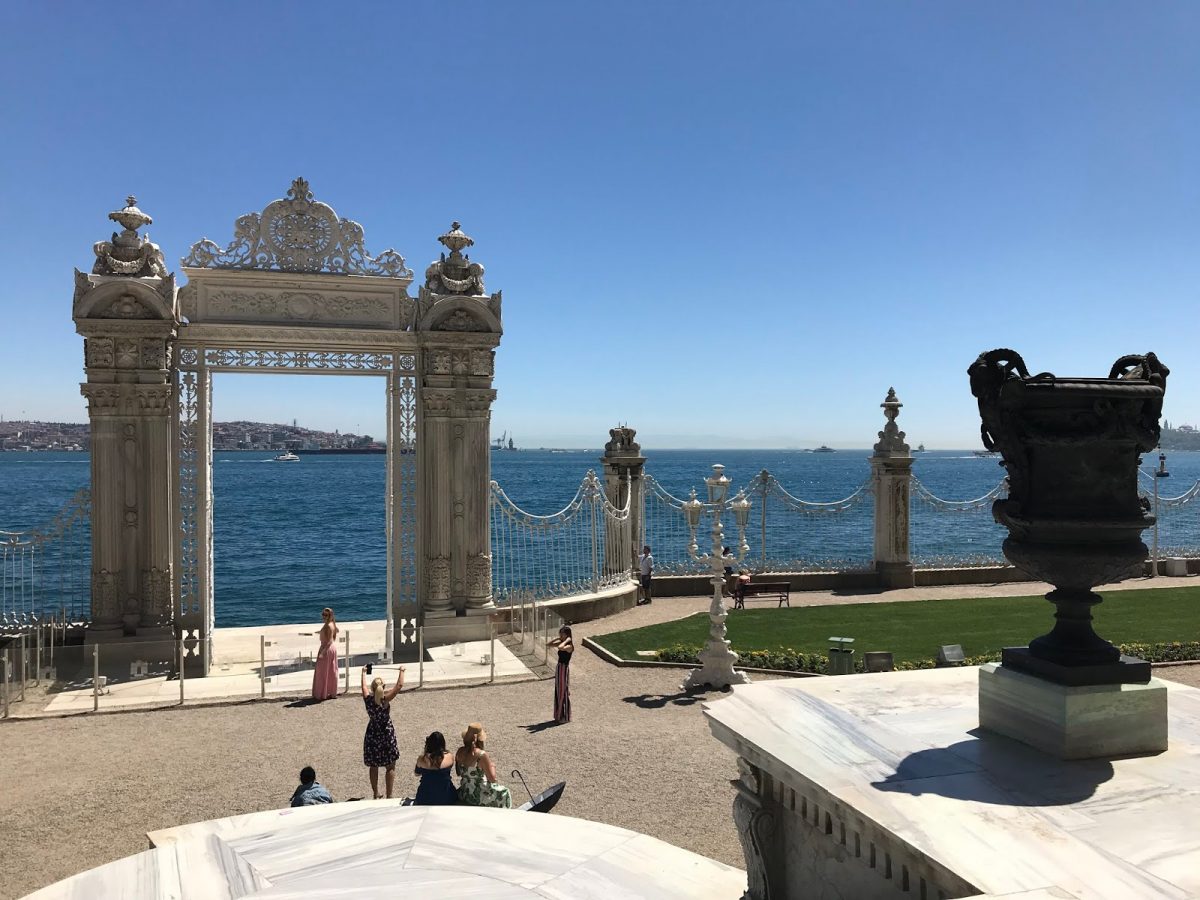 A small tip – there’s an elegant cafe at the rear of the Dolmabahce Palace Istanbul. So you can sip on some hot chocolate, with enchanting views of the Bosphorous.

When To Visit The Dolmabahce Palace in Istanbul? 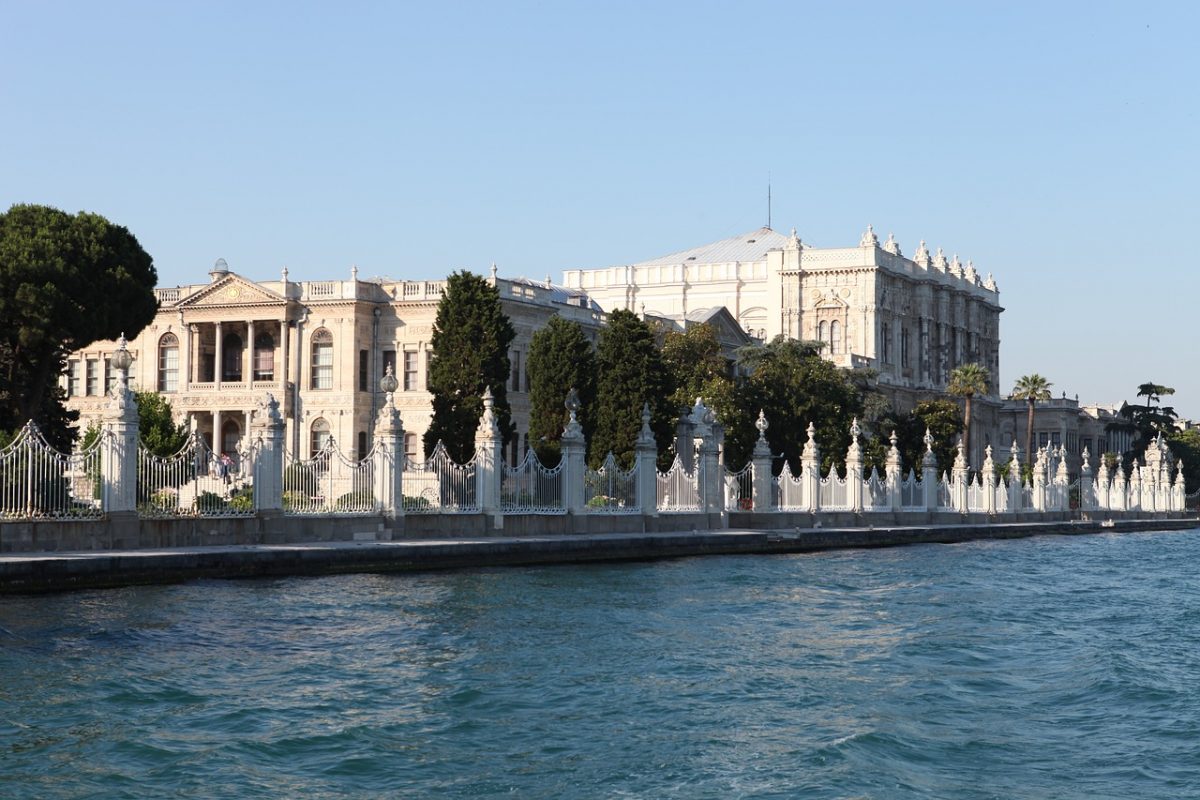 Photo By Footsuat From Pixabay

You can visit the Palace any time of the year. Just check for any national holidays in Turkey. The opening hours of this grand palace are 9 to 4 pm, except that it remains closed on Monday and Thursday.

The entrance lies next to the clock tower which has remarkable handiwork. Please note that summer months witness long queues at the ticket counters. And if that’s when you are visiting, you better be early my dear.

How To Reach Dolmabahce Palace? 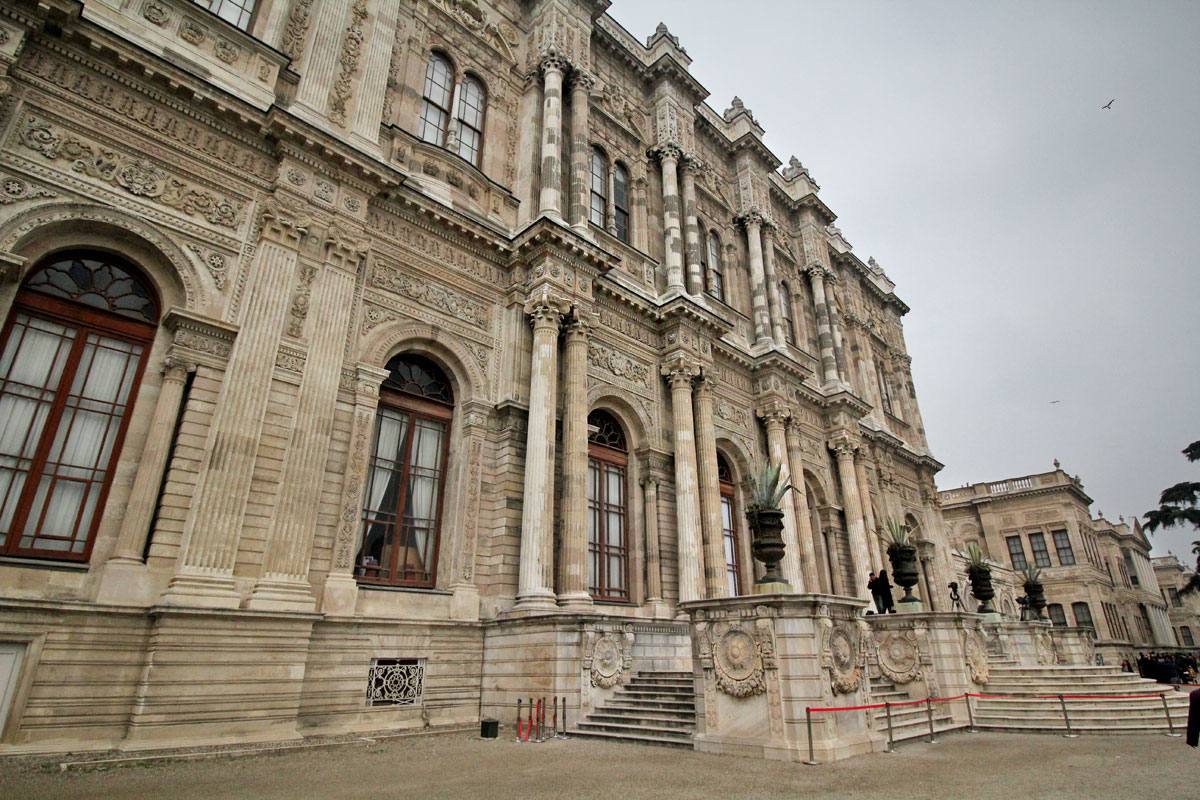 Being the centre of attraction of the Istanbul city, reaching the Palace is an easy task. You can easily get here through the Kabatas tram, which is a short stroll away. Moreover, Kabatas trams are the cheapest and most convenient way to reach here.

The bus stops, and ferry docks are also at walkable distance. So you can pick the transit of your choice, though depending on your source location. Taxis are easily available in Istanbul. Thus travelling is never an inconvenience in the Turkish capital. 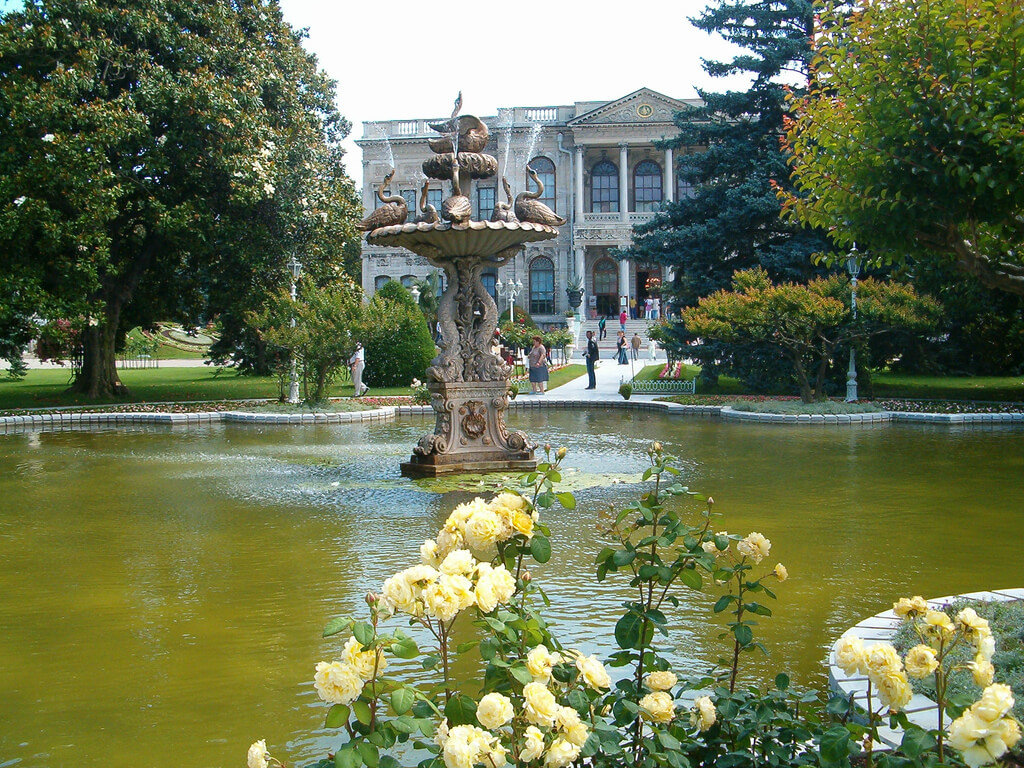 The Dolmabahce Palace is a majestic structure with the backdrop of an equally elegant sea. Everything from its floors to ceilings, furniture to tapestries spill off luxury. Besides, the intricacy that has gone into the detailing is no match for the present-day architecture.

Hence, its grandiosity awes millions of tourists without fail and doubt. It’s also an ideal tourist spot for luxury architecture and history buffs. And if you haven’t yet booked your tickets, hurry up! The great Turkey Palace is definitely worth a glimpse.