Banff beckons all sorts to its little crevice in the Rocky Mountains. People have been flocking here since the Victorian age to get their R&R in the hot springs. Others, more recently, have come to whiz down ski slopes. And summer always proves a doozy, with hiking routes and mountain biking galore. Yep, this one’s a true outdoorsy playground, which means there’s never any shortage of adventurous things to do in Banff.

If you’re passing through for just 24 hours, then you’re going to want to be certain you get it right! From hot springs to stunning vistas, gondolas to scenic driveways, there’s stacks to consider. This list of the very best things to do in Banff can help, though. It ranges across the Rocky Mountains, out to ski pistes, and into historic parks, just so you can have the day trip of a lifetime… 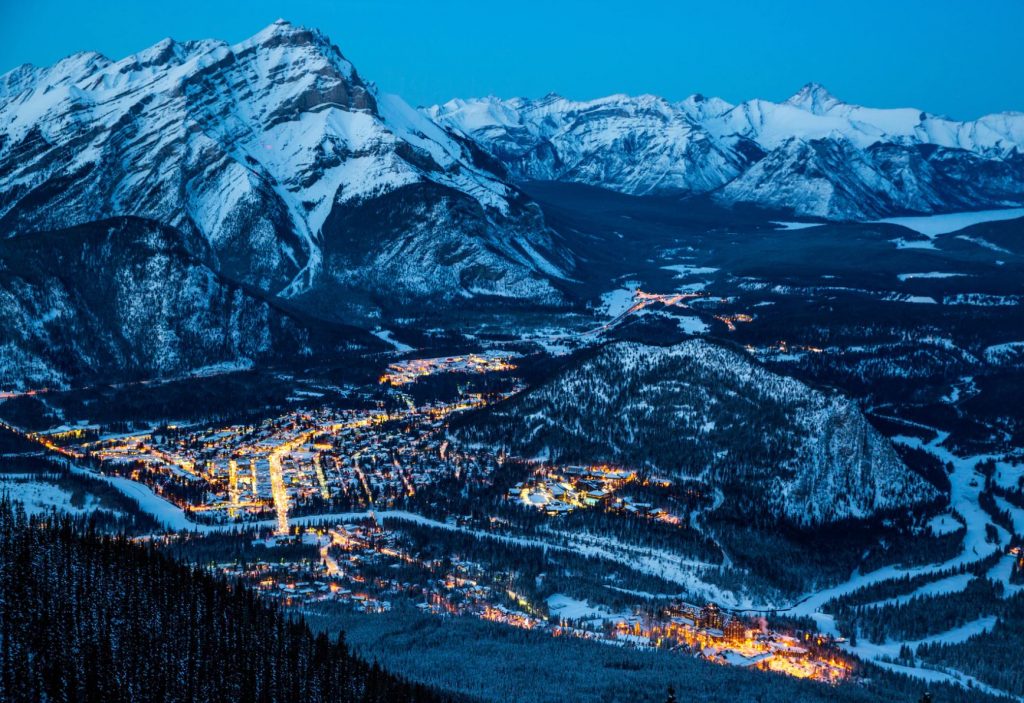 Do a guided tour around the Town of Banff, Canada

When it comes to things to do in Banff and you’ve only got a day, where better to start than right in the center? Yep, Banff town isn’t your usual mountain resort. It’s got history bursting from every seam. Its roots are in the railroad days of the 1880s until Victorian-era holidaymakers came in search of sublime mountains and hot springs, that is.

A guided tour of the downtown will unravel all those stories and more. It should also give you a chance to get a feel for the vibe of the place. Lively and loved, it’s packed with everything from whiskey pubs to steakhouses. You’ve got the heritage-rich King Edward Hotel to learn about, along with oodles of local art galleries and spas. In short, this one’s the perfect activity for those who prefer to rest and rejuvenate and learn in the mountains. 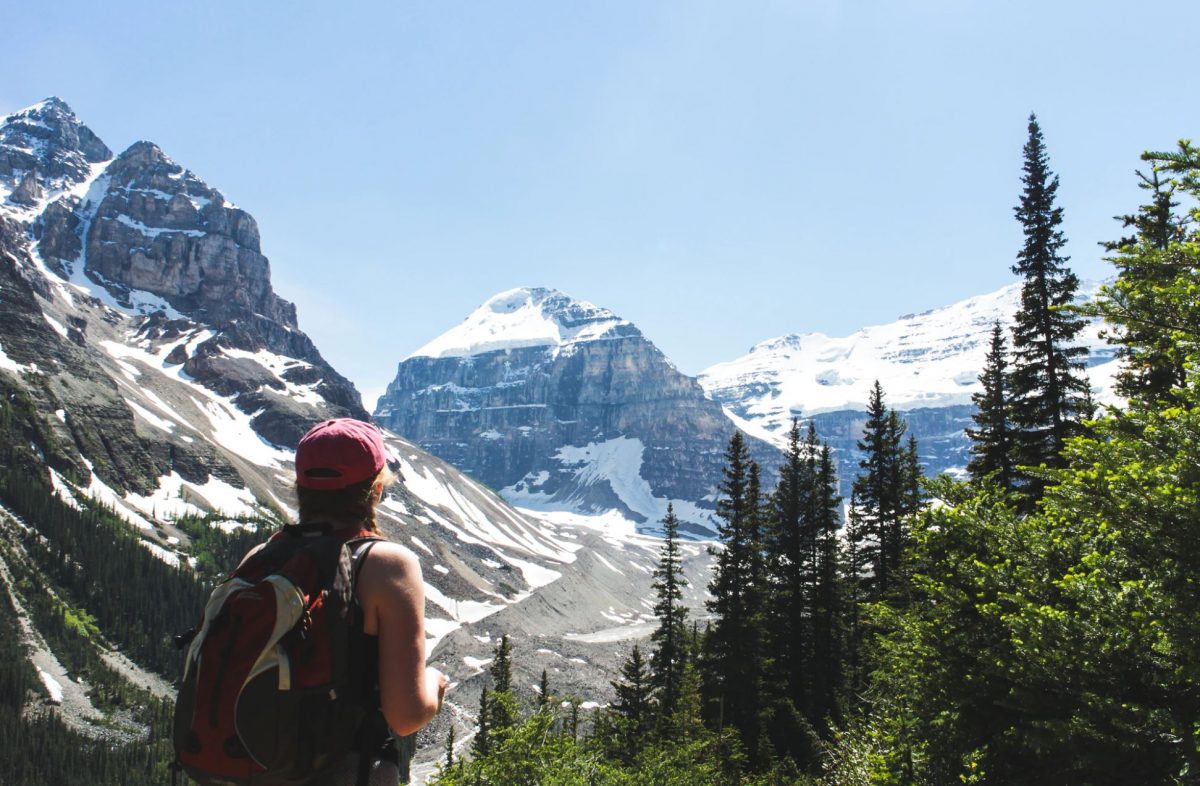 Looking for adventurous things to do in Banff? There’s certainly no shortage of those! This town sits on the cusp of the Banff National Park, Canada’s great wilderness area. That means mountains and lakes and ski fields and hiking paths abound. However, there’s one possible day outing that always promises to get the adrenaline pumping: Heli Hiking.

It goes like this…You hop on a helicopter. Then you whizz out across the soaring mountaintops of the Banff National Park. Your qualified trekking guide picks a spot to touchdown. And then you pull on the boots to hit trails other ramblers could only dream of finding.

The real upshot here is that you get two adventures in one. There’s the flyover of the great Rocky Mountains – be sure to keep an eye out for gleaming Lake Louise as you do that! And there’s the trekking itself, which could take you to some seriously hidden corners of the region. 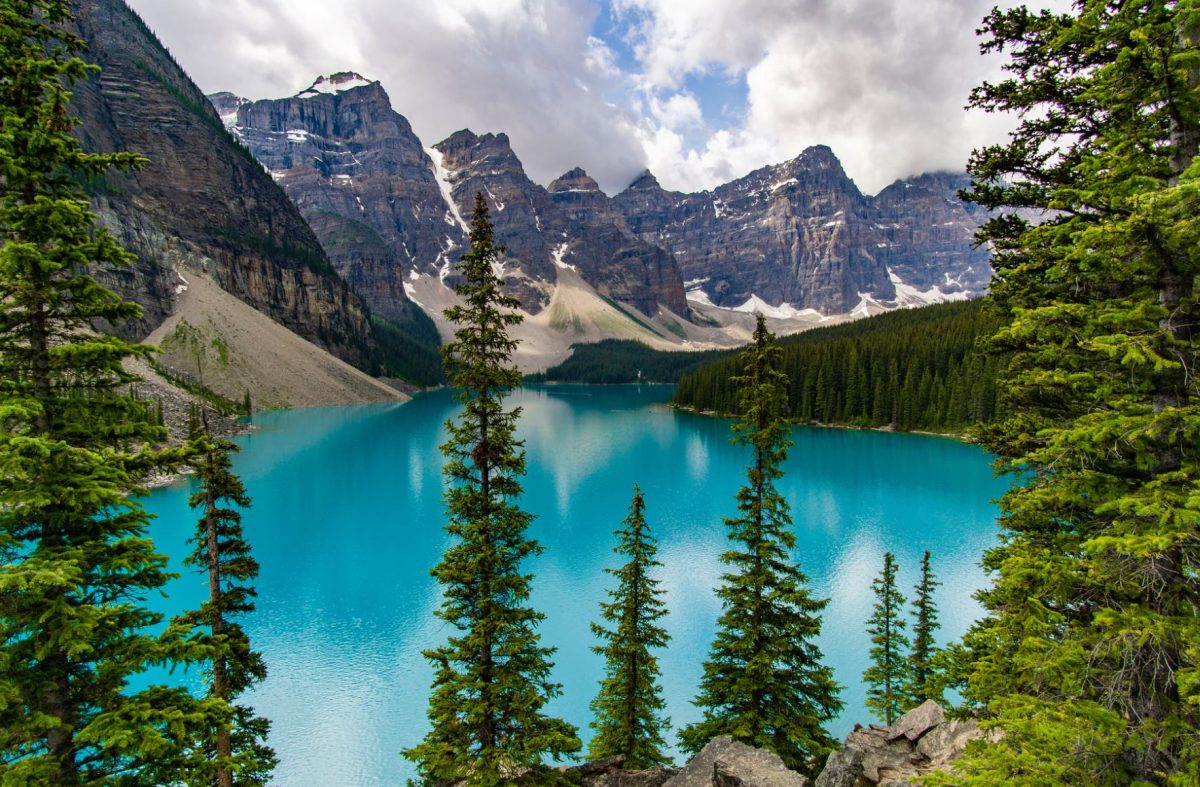 Being based in Banff gives you the power to pack much more into those day trips. Yep, while visitors from Calgary and Jasper can only dream of seeing so much, you can check off oodles in a single sitting. The upshot? Your Rocky Mountains adventures don’t have to end at just one lake! They can include whole swathes of the backcountry and more. In fact, some of the most celebrated day outings of all here count Lake Louise and Moraine Lake on their itinerary.

Lake Louise is perhaps the best-known of the lot. It’s considered one of the most beautiful features of the whole Canadian Rockies. It glows turquoise blue between a fold of rugged mountains just outside of the town of the same name. Overhead, the Victoria Glacier crashes over the ridges. Spear-like pine trees pop up all around. This is true alpine country.

After that, you can move onto the glorious Moraine Lake. It’s pure drama from the get-go. Think walls of peaks jutting into cloudless skies. Imagine dashes of evergreen forest meeting waters dusted with rock flour. Consider bobbing canoes by jetties and clusters of driftwood and pinecones. Photo opportunities abound in both lakes, and Banff is a prime location to organize day-long tours. 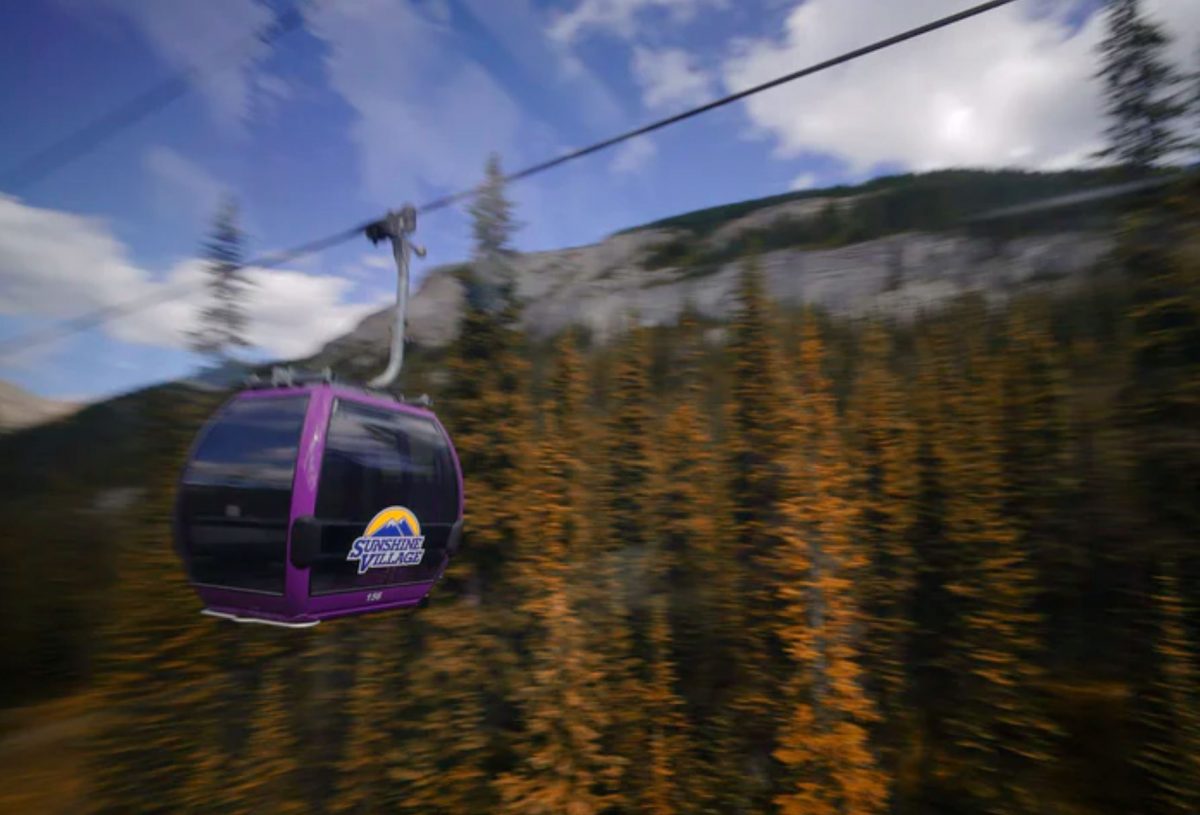 Come winter, Banff transforms into arguably Canada’s finest ski resort. Yep, if you’re lucky enough to be here when the snow is falling, there’s perhaps no more adventurous things to do than slipping on the salopettes and making for one of the nearby ski fields. There are certainly plenty on offer…

The closest to home is surely Mount Norquay. It’s got a snow-reliable top elevation of over 2,100 meters. There’s a dedicated snowboard park, night skiing, and a whopping 60 separate runs with dedicated snowmaking. Along the valley, just a little is where you’ll find Banff Sunshine Village. It’s another world-class resort, touting a kilometer of vertical drop and a mega 120 marked runs.

The furthest afield, but still within reach for day-trippers, is Lake Louise. The ski field there has a truly jaw-dropping setting, what with the ice-caked waters of Lake Louise itself unfolding across the way. The skiing, meanwhile, is draped over Whitehorn Mountain. It clocks up nine modern lifts, 145 pistes, and a huge total terrain area of more than 17 square kilometers! 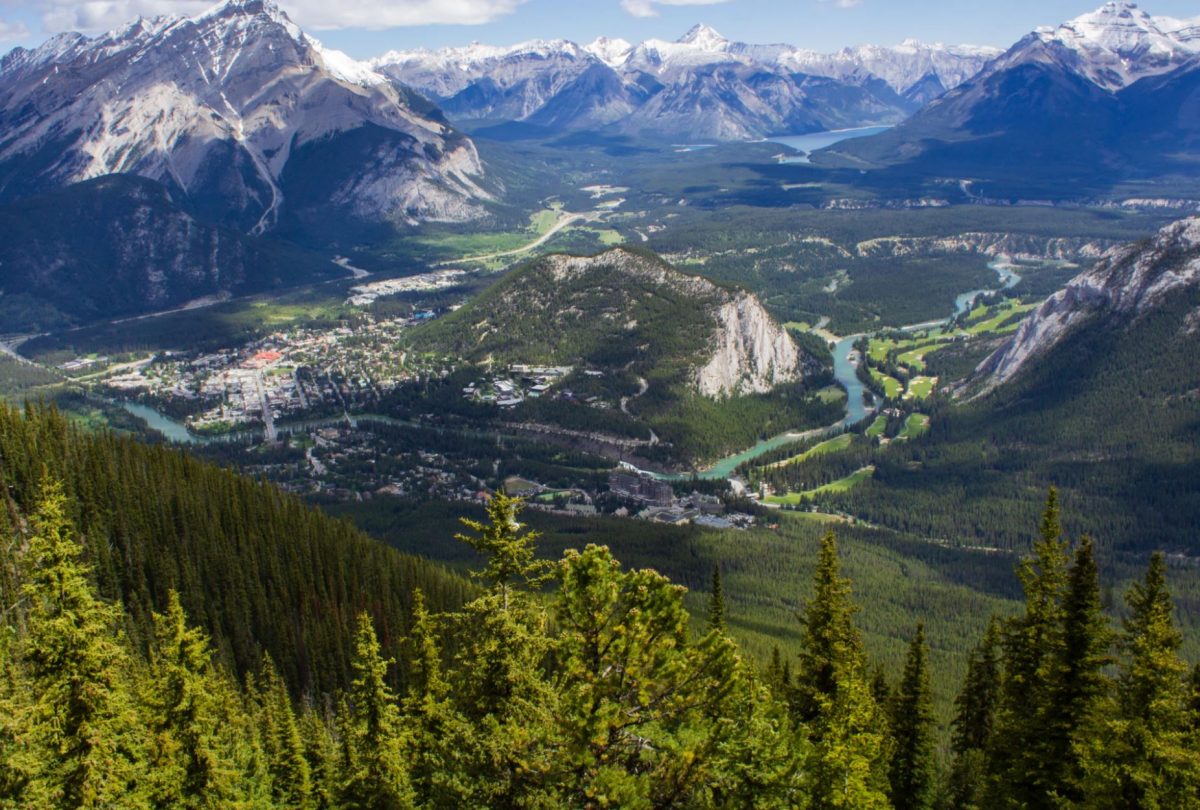 The Banff Gondola links the base of the mountains to the city. It leaves just south of the center of Banff itself, soaring more than 2,400 meters above sea level to the summit of Sulphur Mountain. Up there, the views are the obvious draw. But you can also delve into a multi-faceted entertainment complex with all sorts for all sorts.

First, though, be sure to swivel around. There are panoramas from the pinnacle of Sulphur’s peak that are to die for. You’ll be able to see Banff huddled around its little creeks below. It’s possible to spot the shimmering azure waters of Lake Minnewanka to the north. The rock-ribbed backbone of Cascade Mountain fronts up like a sleeping giant right ahead, too. It’s camera-drawing stuff, for sure.

And when you’re done staring at the view? A duo of enticing restaurants done in the alpine style beckon. They serve hearty North American cuisine and boast crackling log fireplaces to boot. It’s also possible to hoof it across the high-perched Banff Gondola Boardwalk, to discover the next summit at Sanson’s Peak.

Get your fix of pre-history at the Cave and Basin

Just a whisker to the west of the town center is where you’ll find the Cave and Basin. It’s surely one of the top things to do in Banff for those interested in the rich history of the Rockies region. Why? Well, the site that you’ll find there is now a dedicated National Historic Site of Canada. That means it’s wrapped up in the local human story.

In fact, it’s thought that people found the Cave and Basin complex more than 10,000 years ago. They were probably drawn to the area by the steaming hot springs which you can still tour within. The first modern discoveries of the same springs come in the late 1800s. That’s the period that took Banff from the backwaters to the front page of the travel brochures!

Inside the Cave and Basin National Historic Site, you’ll be able to learn all about the unique history that’s occurred here. And you’ll get up close and personal to the pungent sulfur pools that broil beneath the hills. 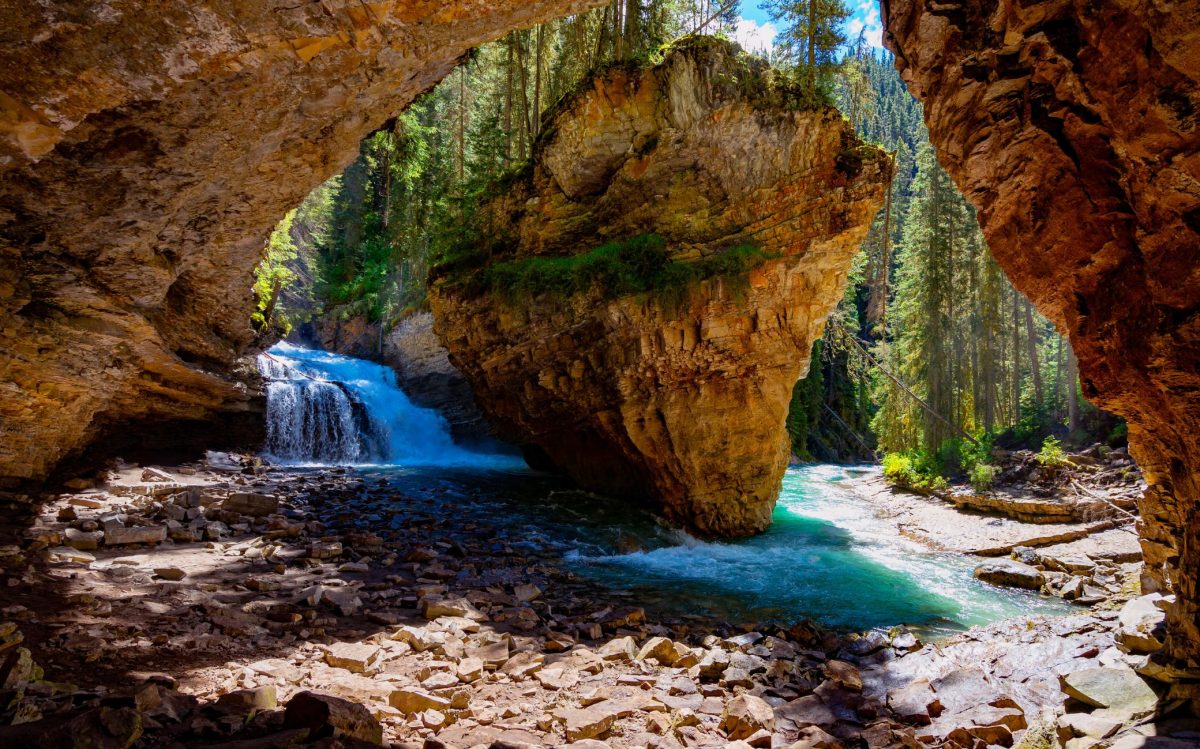 Go in search of waterfalls

Not all of the hikes around Banff take 10 hours and need crampons, you know! In fact, there are oodles of accessible trails where you’re rewarded with visions of peaks and glaciers, lakes and summits. Others will open up gorges and canyons that gush with babbling waterfalls.

If that sounds like one of the sorts of things to do in Banff that tickles your wanderlust, be sure to set your compass for the walkways of Johnston Creek. They join the Bow River just a stone’s throw from the town itself. That means you can easily reach the trailhead by morning and get a-going.

The journey starts on elevated pathways that wiggle and weave through a narrow gorge. They’re lofted over emerald pools and babbling streams, sometimes dipping in and out of woodlands. Soon, you’ll reach the Lower Falls, gushing steadily over a break in the rock. The route gains height after that, eventually leading to the Upper Johnston Falls – the more dramatic of the two.

Conquer the whitewater rapids of the Kicking Horse River

If you’re on the hunt for truly adventurous things to do in Banff, look no further! The Kicking Horse River can be found rushing headlong through the Rockies within reach of the town. What’s more, it’s widely considered to be one of the meccas for whitewater rafting trips in the world.

If you’re keen on high-speed chases through roaring sections that challenge the muscles, they can be organized. In fact, the hardiest packages can include up to 28 rapids in a single outing, with speeds going up to 25 miles per hour! But there are also gentle family lengths of the Kicking Horse, where you’ll drift serenely through the countryside watching as the spruces move on by.

Oodles of tour organizers can offer to whisk you away from Banff for water-based Rocky Mountains adventures. Typical prices for day outings on the river are between $140 and $170 per person. There are often special rates for families and larger groups. 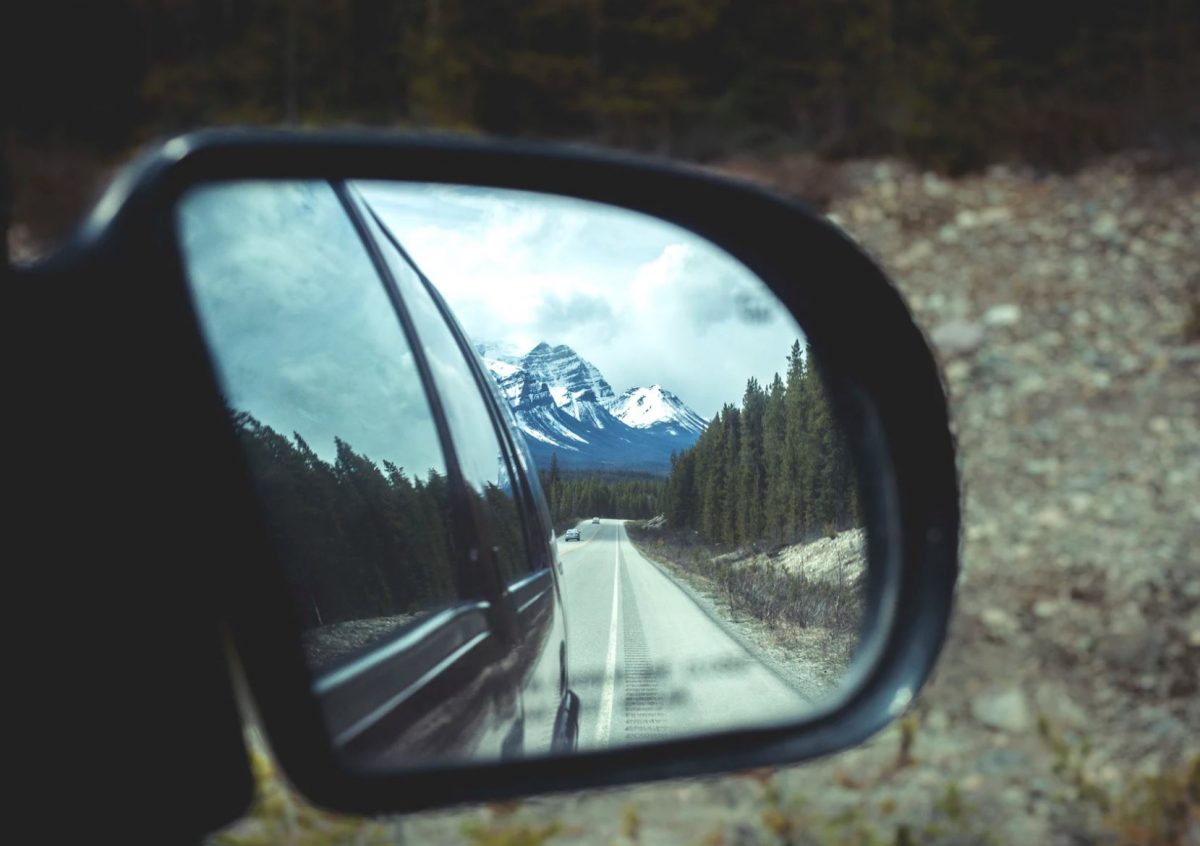 You might only have a day to check off all those things to do in Banff, but there is an argument to say you should spend it in the car. Yep – stick to the saddle and you could find yourself cruising along one of the most awesome scenic byways on the continent. It’s called the Icefields Parkway, and it runs northwards out of town to the region of Jasper.

In total, the trip should take just three hours. That means you can make it there and back again before having to hop back on your transfer. Along the way, you’re sure to see stacks of wonders. There’s the azure Bow Lake. You’ll whizz over the famous Saskatchewan River Crossing as Mount Murchison glowers down from above. And you’ll even pass the majestic Columbia Icefield, complete with glass walkways over its sun-gleaming glaciers.

Of course, you’re free to complete just portions of the drive. You can also stop off wherever you like. In fact, it’s highly likely that you won’t get far – this combo of the Banff National Park, Canada wilderness, and the Jasper National Park is well-trained at getting you to pull up the handbrake to explore a little more! 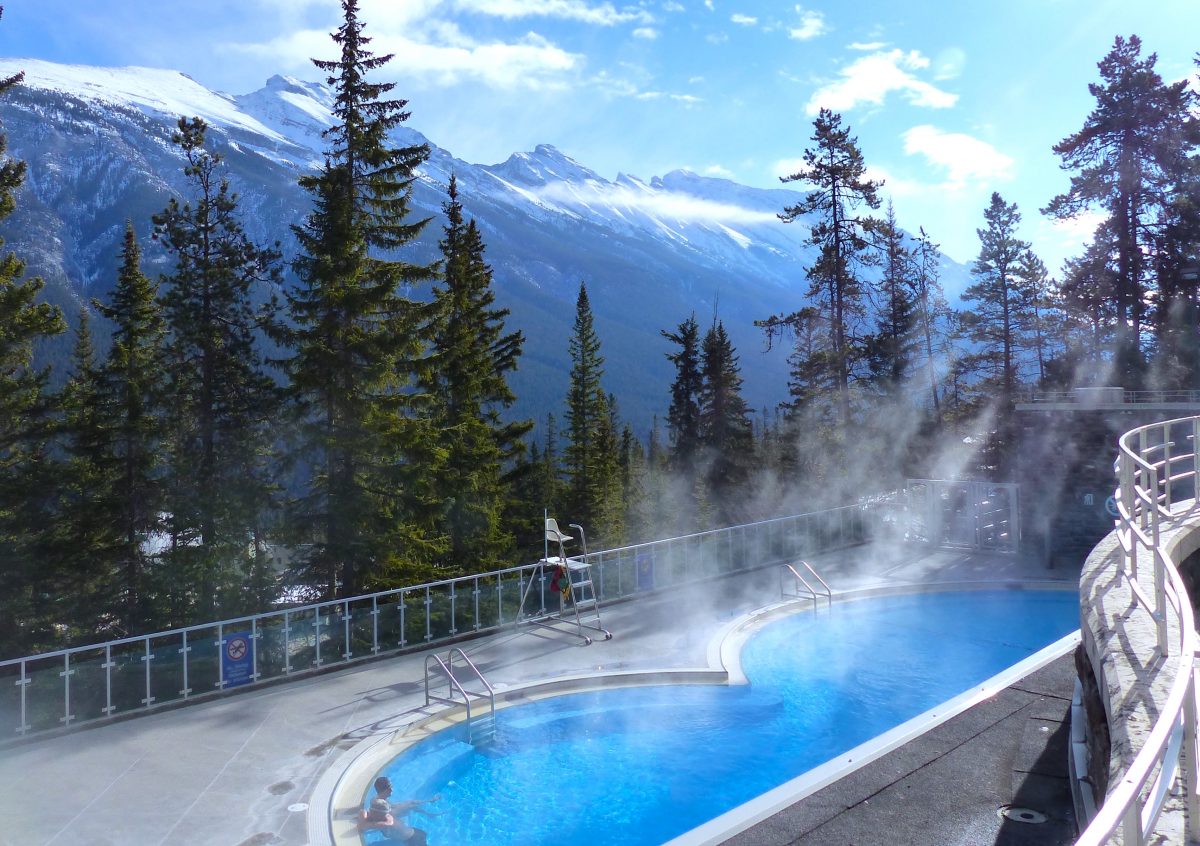 Soothe the muscles in the local hot springs

The whole region around the Banff National Park, Canada, is fed by hot springs of all shapes and sizes. It’s what first put the town on the tourist map back in the Victorian age of exploration. And it’s probably what kept pre-historic settlers here all those millennia ago.

To sample that heritage for yourself, there’s arguably no better place than the Banff Upper Hot Springs. They sit right by the base station of the Banff Gondola, just a smidgen to the south of the resort itself. There, you’ll see the waters steaming and bubbling in the colder months, but they remain warm throughout the year. Within, each pool has tailor-made combos of minerals to sooth particular ailments, with sodium and calcium options and more.

Banff elevation at offer 1,300 meters means these are among the highest commercial hot springs in the world. That also means the glacial water here is some of the cleanest you’ll find. And it means – of course – that the views from the poolside are nothing short of stunning!

Want to know more about Canada and what else you can do here? We got you covered. Check out our latest post related to Canada here. And if you want to the best spot to catch a glimpse of the Northern Lights in Canada. Here’s everything you need.