Many films have been filmed here and of course, there is an endless stream of Instagram needs to be filled with this beautiful baroque masterpiece. Therefore, something like 1200 people per day crams themselves into this small square. All of them crowding to toss the traditional coin (or two) into the fountain.

The Trevi Fountain is located centrally and close to several of the other must-see attractions of Rome so it is easy to get to on a day of sightseeing through the ancient streets of Rome. But to truly feel the entirety of this fountains majestic grandeur you must know a bit of its history.

History Of The Trevi Fountain In Rome… 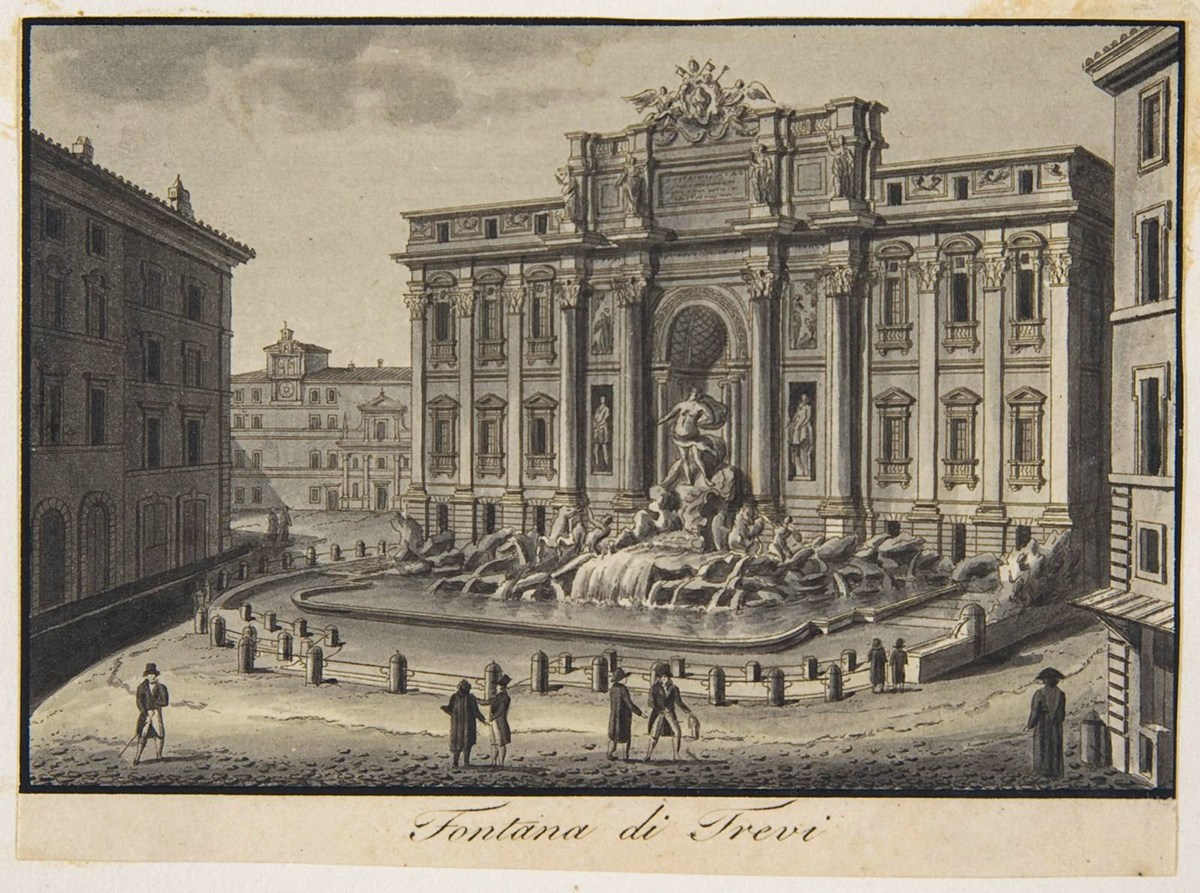 The city of Rome is chock full of ancient ruins and buildings that have stood the test of time. In retrospect, the Trevi fountain is quite young. Built in the 18th century the fountain began as a commission from the Pope of that time.

Pope Clement XII wanted to create a beautiful fountain over the Acque Vergine and decided that the best way to figure out who should e the artist to do so set up a competition. After all, the fountain over this aqueduct that had been bringing clean water to the citizens of Rome for almost 2000 years needed a majestic fountain.

So, the race was on. Many famous artists submitted their labs and waited patiently for the Pope to make his decision. This is where controversy stories. In the end, a Florentine artist won the competition but wanted to keep it local was pushed aside for a local architect, Nicola Salvi. The winner announced the construction began.

The burning influenced the baroque interpretation of the ancient god Oceanus and the gifts that water brings the citizens of Rome was finally finished in 1762. Though not by Salvi. He dies 11 years earlier and left the project in the hands of fellow architect Giovanni Pannini.

Things To Do At Fontana Di Trevi

There are thousands of people daily maybe even hourly during peak season that stream through the small square where the Trevi Fountain is located. All looking to do one of three things (or all three depending on the person). There are just some things that you must do: 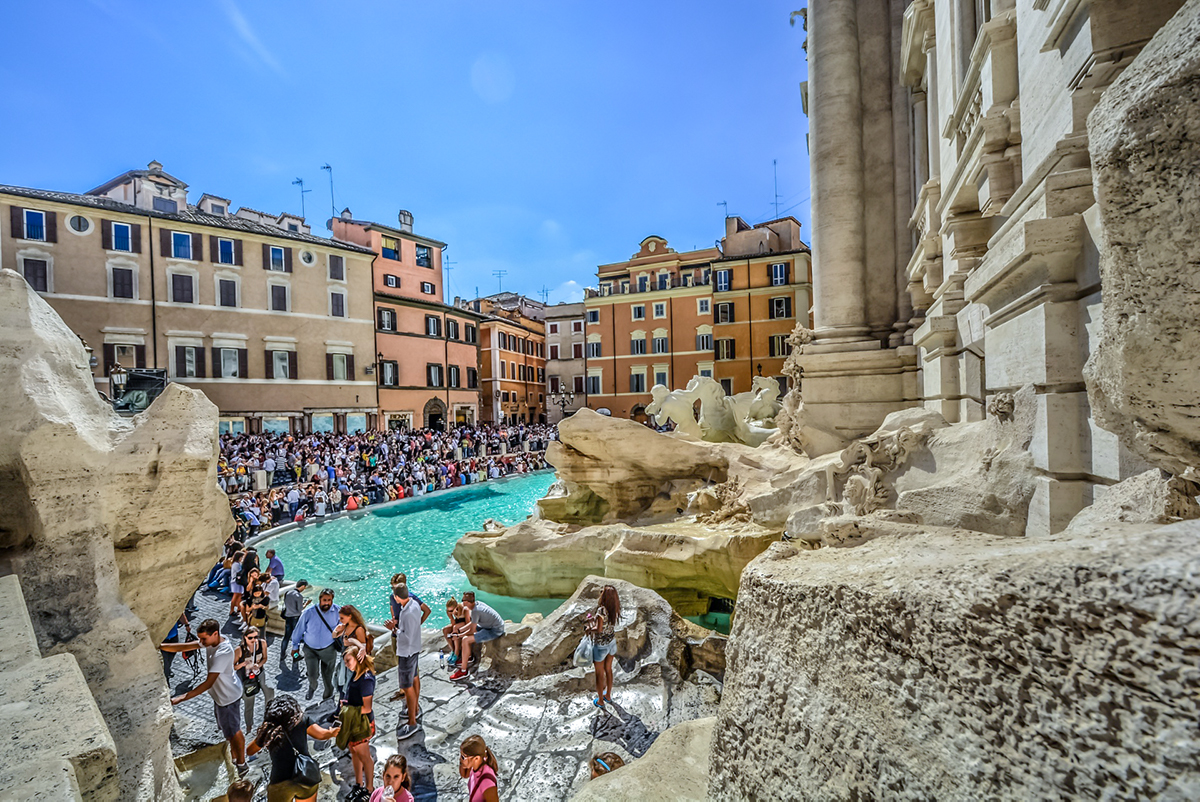 Photo by Kirk F from publicdomainpictures

Toss A Few Coins in the Fountain…

It is a tradition to toss one or two coins in the fountain each meaning something different but both having to be done in just the right way. So, when getting ready to join the army of people tossing away a few euros make sure you do it right. The correct way to do this is to stand facing away from the fountain.

Then with the coin in your right hand, you toss it into the fountain over your left shoulder. The first coin you do this with is to ensure that you return to Rome someday and the second is all about finding love. (Now for those that have an extra euro to spare you may want to try the third one if you are looking to find Mr./Mrs. right and get your walk down that aisle.)

If you are into films, you may want to take the tie to marvel at all the famous scenes that have been filmed in the spit you are now standing. This fountain has been the site of many classic scenes directed by some of the most famous and iconic directors.

Directors like Fellini have found themselves drawn to the beauty and grandeur of this amazing piece of artwork. So, take some time to think about how many times you have seen these statues and these waters in films through the decades.

First off you are in Rome! That is amazing and probably one of those things you have always wanted to do and now you are standing in front of this iconic monument. So, take a moment and live in it.

Smell the smell of the restaurants and the water that permeates the air. Listen to the hustle and bustle (and sometimes street artists). Just take that moment and then stare in awe at the magnificence of the detailed baroque statues. You are in Rome!

Things To See Around The Trevi Fountain… 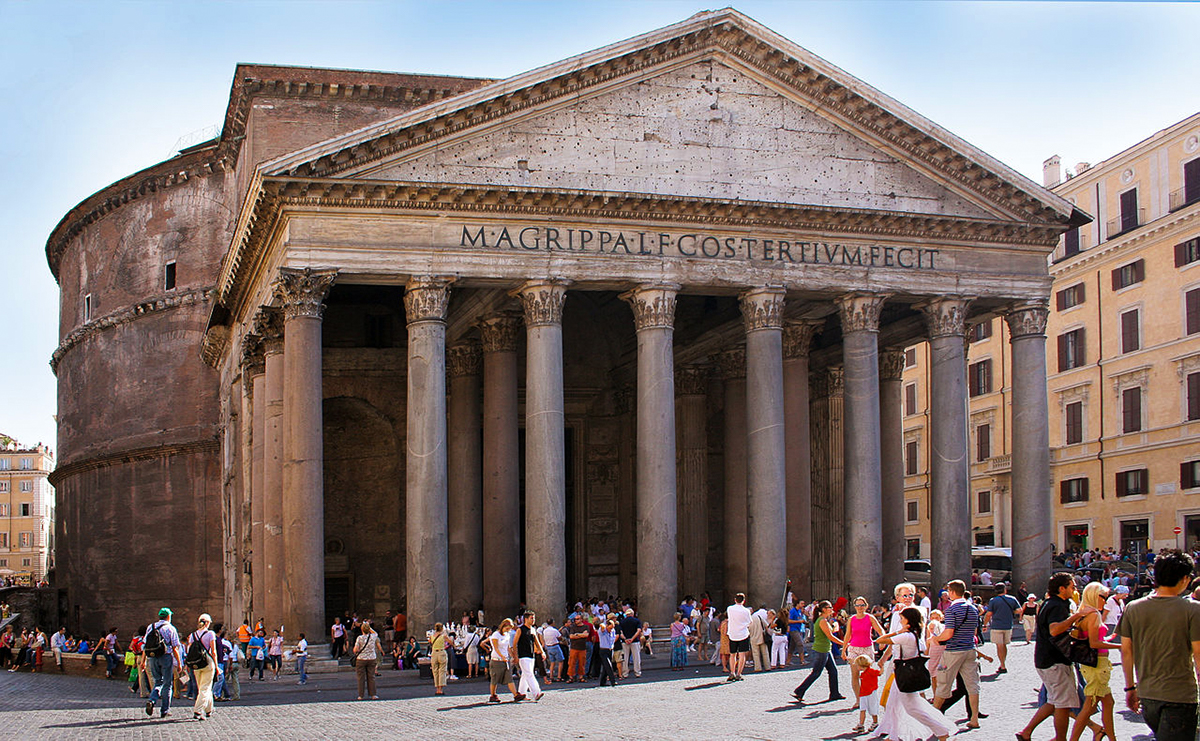 The Trevi fountain is situated central and close to many other sights that you should take in as well. Here are a few of the big monuments you can check off your list and marvel at that are within walking distance from the square that houses this fountain:

This great stop on your walk around Rome is a staircase of 138 steps that is topped by Trinita dei Monti church. At the bottom of this staircase lays the fountain of the ugly boat fountain designed by the son of the famous sculpture Bernini. There are plenty of shops around this square as well as some amazing restaurants.

This piazza is surrounded by restaurants and local vendors, but the star of the show is the fountains that are in the center of this popular square. One of which is the Fountain of the Four Rivers sculpted by Bernini himself.

This building began as a pagan temple in the first century A.D. It is now a church. This building is built with a rather large cement dome.

Places To Eat Near The Trevi Fountain…

There are many great restaurants throughout Rome, so finding a great restaurant is never that hard. In the area surrounding the Trevi fountain, that is no different. With restaurants ranging from Gelateria;’s to fine dining to cafes, you will not be at a loss when your stomach begins to growl.

Here are a few of the best restaurants around the fountain: 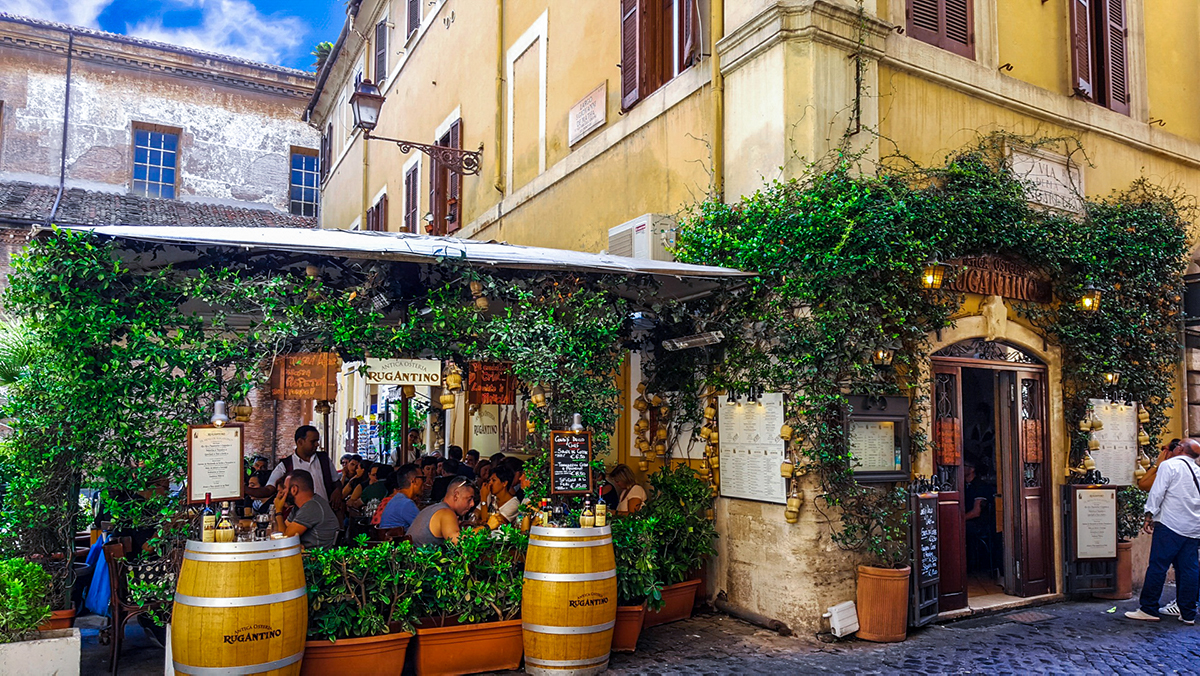 Photo by Kirk F from publicdomainpictures

This is a great place to grab a glass of wine and a Charcuterie plate for a nice mid-afternoon break.

This is a very traditional restaurant family owned establishment. A little bit of a hidden gem this restaurant is only open Tuesday through Saturday.

Another traditional small restaurant that specialises in classic Roman cuisine as well as Mediterranean dishes.

These are just a few of hundreds of restaurants that you can take time out of your sightseeing to grab a traditional plate-like Cacio e Pepe, an antipasti plate or even just a quick snack like Bruschetta. Pair it with house wine and sit outdoors to enjoy the ambiance of Rome.

How To Get To The Trevi Fountain… 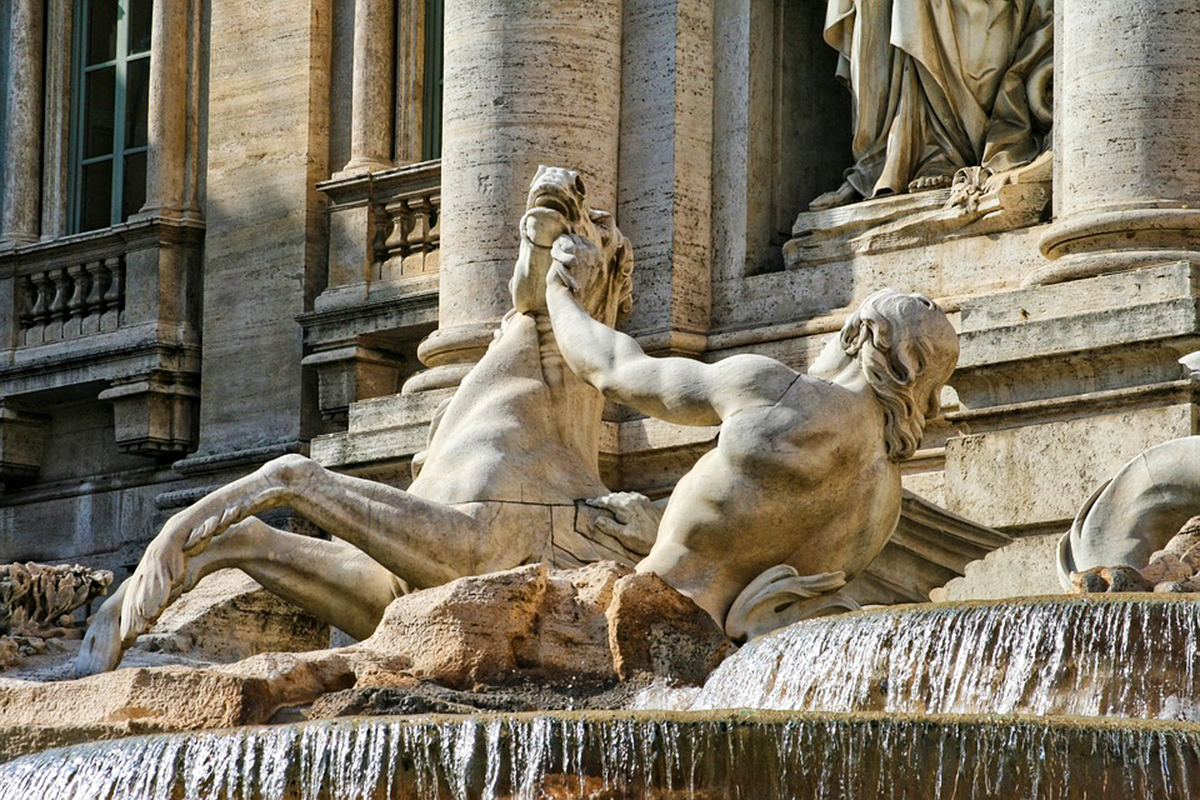 The Trevi fountain is situated near the intersection of Via Della Stamperia, Via del Lavatore, and Via di S. Vincenzo. Close to the metro stop at Barberini.

Walk southeast on Via di Sant’Andrea Delle Fratte and then take a left onto Largo del Nazareno. Once you reach Via Della Panetteria takes a right. Walk a little while and when you get to Via della Stamperia and take another right. Keep going and you will find your way to Piazza di Trevi.

Hop on the red line and head in the direction of Barberini station. Then hop off and walk 8 minutes to the Piazza di Trevi. 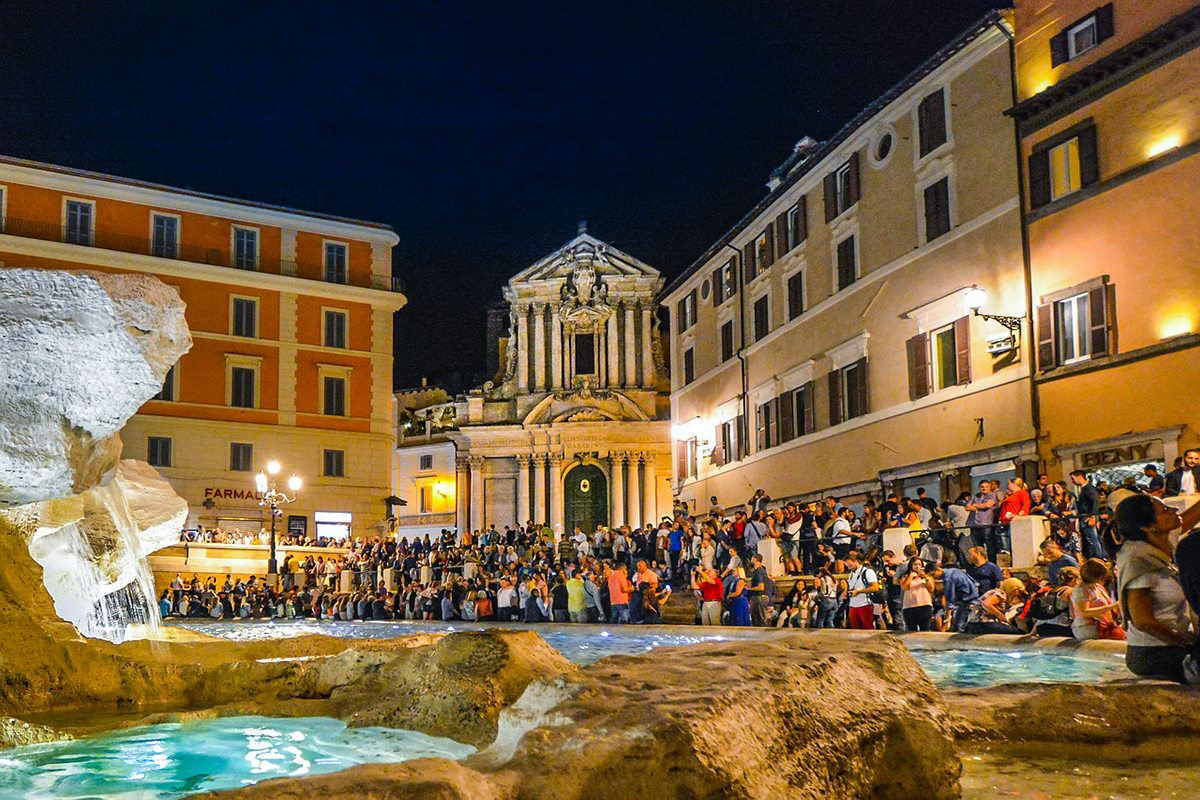 Photo by kirkandmimi from pixabay

When dealing with the crowds that surround the fountain day and night there are some great tips you can use to make your experience that much better.

Visiting Rome is magical and is made more so by visiting the sights and experiencing the history of this iconic city. The Trevi fountain is just one of many but is perhaps one of the most beautiful.

Now that you’ve seen the Trevi Fountain, take the time to revel in everything else that Rome has to offer.