Guangzhou, sometimes called Canton, is located along the Pearl River in Southern China. It also happens to be one of the most prosperous cities in Mainland China. This fascinating metropolis is known as the largest trading port in the world as well as the third-largest city in the country.

As such, there are tons of sightseeing and entertainment options for everyone. Whether you are a solo traveller, an adventurous couple, a group of friends exploring China or on a family vacation, you’ll definitely find something here. Here are 15 things to do in Guangzhou, the City of Five Rams. 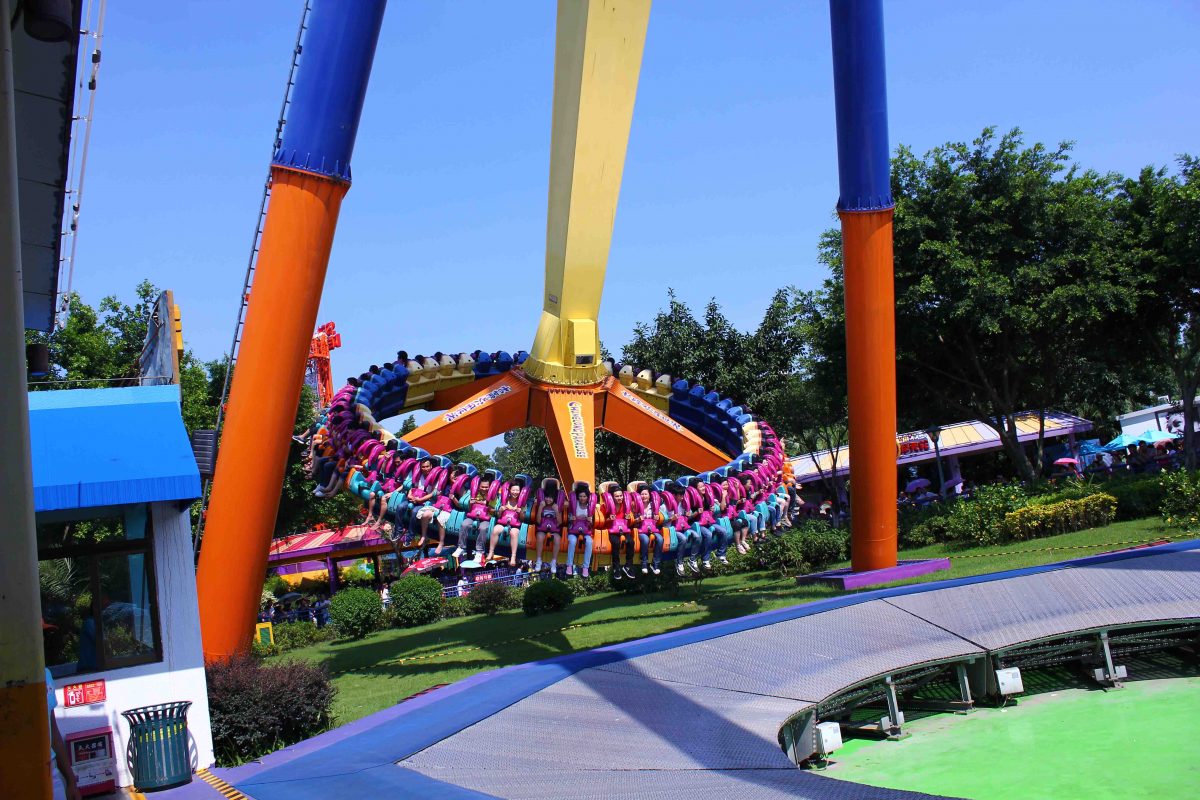 Photo by Zhangmoon618 on Wikimedia Commons

Comprising of a series of theme parks, a safari park and a water park, Chimelong Paradise is sometimes considered as the Chinese equivalent of Disneyland. This massive amusement park was established in 2006. It includes over 60 attractions including bungee jumping facilities, rollercoasters, and carnival games.

Chimelong Paradise’s safari park includes many species of animals including Pandas, Giraffes and White Tigers. Visitors can also attend fantastic circus performances in the circus area such as light shows and slapstick comedies involving clowns. The water park is a must if you visit the resort during the summer. While under the hot sun, you’ll get to cool down in its many pools and water slides.

Be aware that during weekends and holidays, the park gets particularly busy. For more information, visit Chimelong Paradise’s official website. 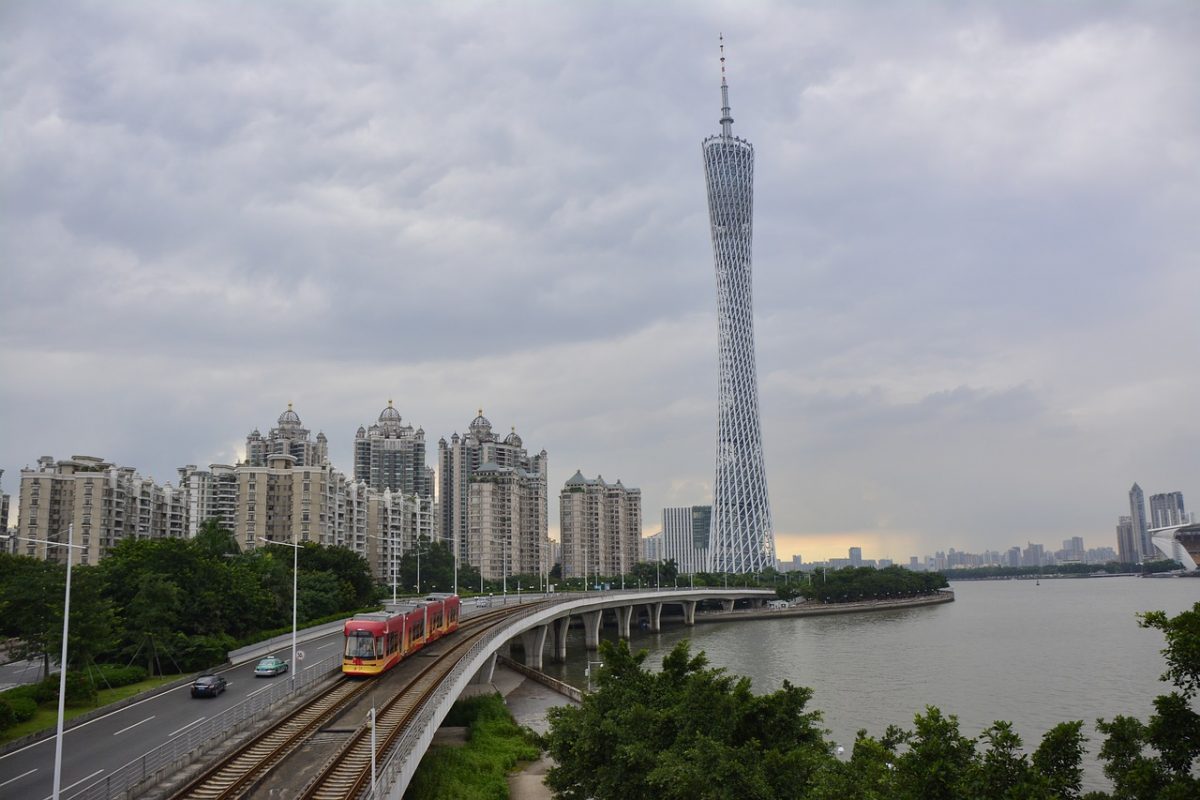 Photo by Andy Leung for Pixabay

A landmark of the city, the Canton Tower is the highest structure of China, at a height of 600 meters (1,968 feet). Therefore, a must-do in Guangzhou is ascending this tower to enjoy an all-encompassing bird’s eye view of the entire city. The view is especially beautiful at sunset.

All you have to do is take the elevator up to the observation deck. From there you’ll get to enjoy a fascinating view of the city as it gets lit gradually when the sun goes down. The tower also includes the Sky Drop. It’s a thrill ride where you can experience a 30-meter free-fall at a height of 485 meters. The Bubble Tram at 455 meters high is also another ride wrapped around the outside of the building. 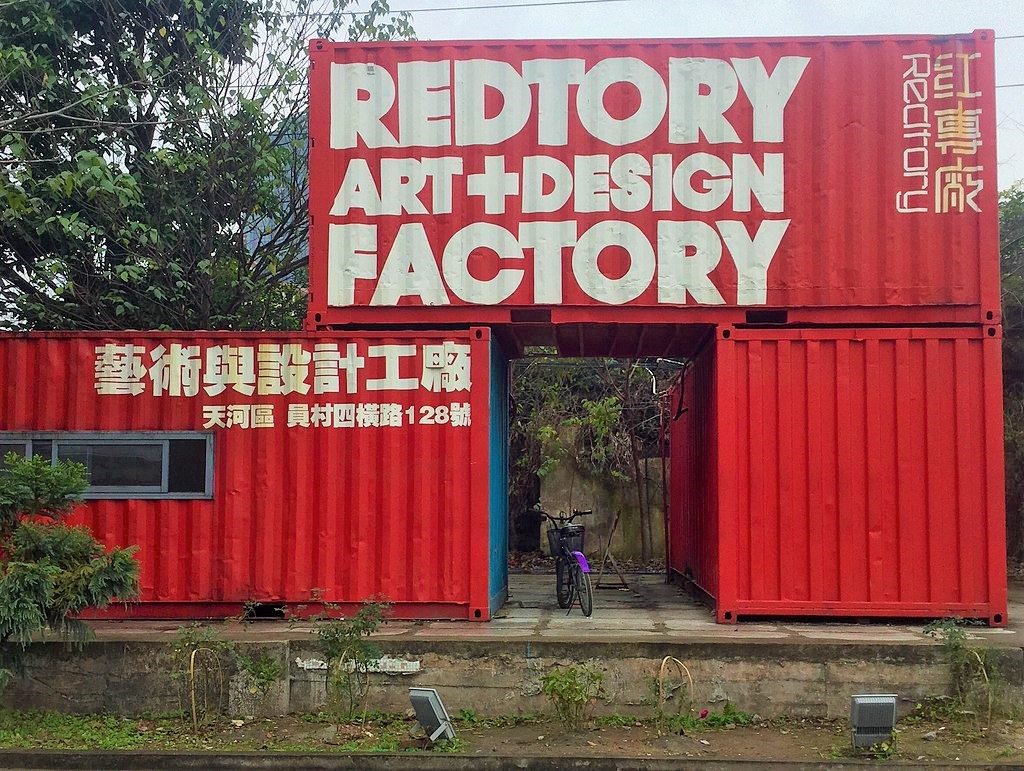 Photo by Ngtm813 for Wikimedia Commons

For all the art lovers visiting Guangzhou, Redtory is a must-visit! Originally built in 1956 as a canning factory, Redtory is an art park where the city’s heritage mingles with cutting edge fashion and art. The compound was once the site of industrial factories. Now, art galleries and spaces, artist studios, fashion stores, and artsy coffee shops occupy the entire site.

Redtory is freely open to visitors. Many have come here for art exhibitions but some have also come to dine and relax in a creative environment. 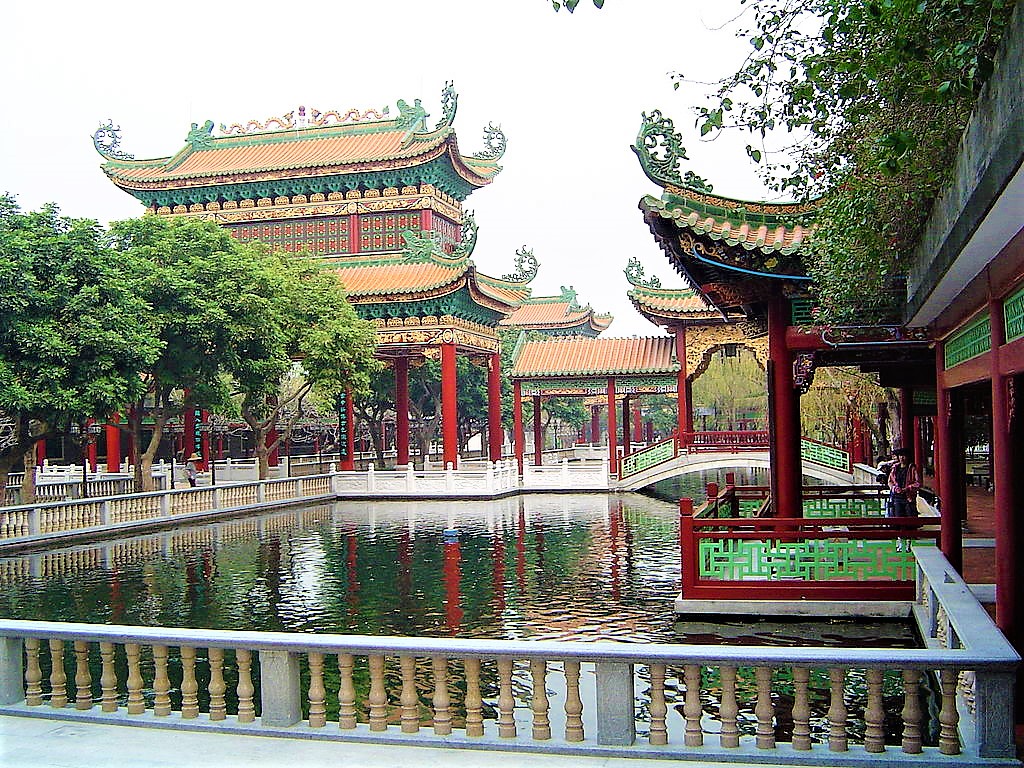 Baomo Garden is located in the village of Zini near Shawan town in Panyu, an hour outside the city centre. The garden was built at the end of the Qing Dynasty. An example of Southern Chinese architecture and the local art of gardening, Baomo Garden was originally built as part of the Temple of Lord Bao.

While the original garden was destroyed in the 1950s, it was reconstructed a few years later back to its former glory. The garden is divided into several areas and features statues, sculptures, stone and wood carvings. You will love strolling around this lush green space with its scenic corners. You can also admire the stunning art, lovely flowers and different plant species as you walk by. 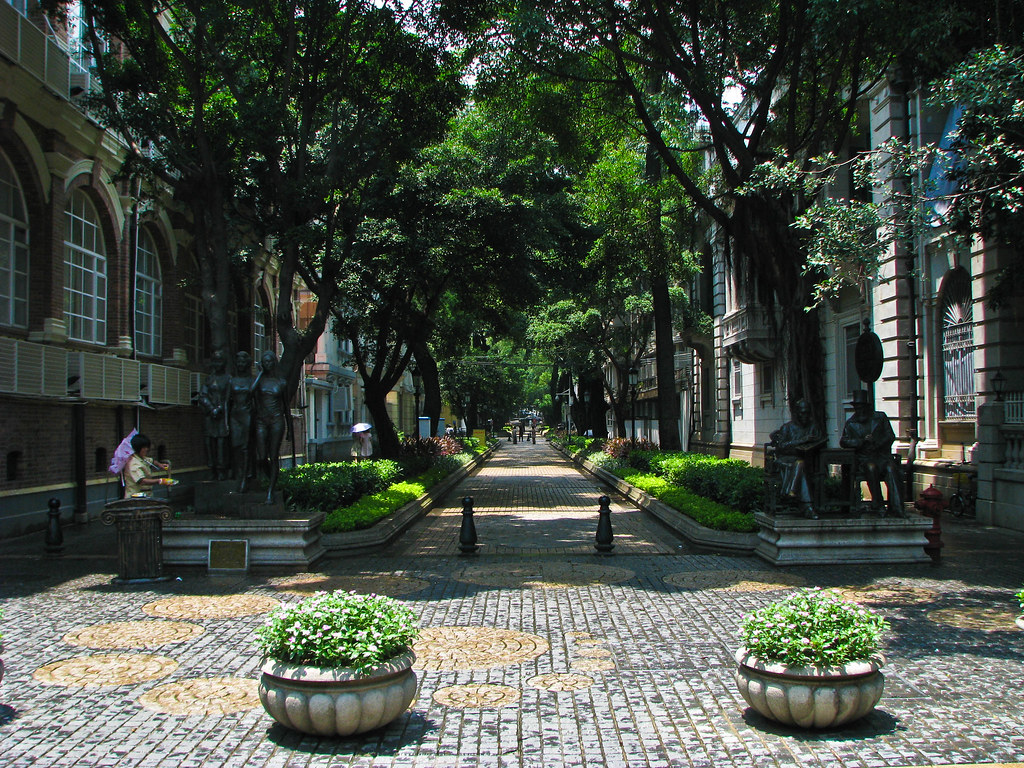 Located in the Liwan District of Guangzhou, Shamian Island is the ideal destination to escape the busy streets of Guangzhou. From the Song to the Qing Dynasties, this island played an important role in foreign trade as a port.

The island is easily accessible by public transport and by taxi from downtown Guangzhou. Shamian island boasts more than 150 buildings dating from the colonial period especially from the 19th century. In fact, it is known as a “museum of world architectures”, with a wide array of buildings done in Baroque, Gothic or even Neoclassical styles. The island also includes many restaurants, museums and shops which makes it a great destination for a day trip that will please everyone. 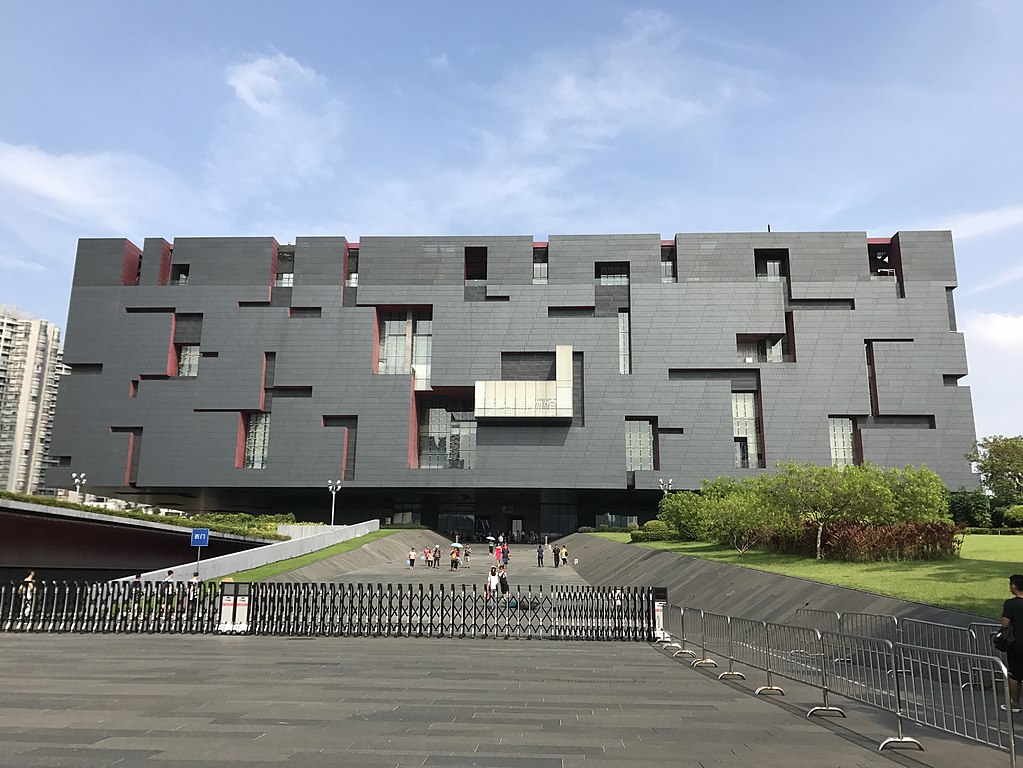 Photo by Fxnn for Wikimedia Commons

If you are interested in learning more about the history and culture of Guangzhou, the new Guangdong Museum, located next to Huacheng Square, is the perfect place. A massive, modern building in the Pearl River New Town (Zhujiang New Town), the museum is spread out between five floors and boasts a diverse collection of Cantonese art, culture, and history.

There are also temporary exhibitions within its premises that offer locals an opportunity to discover foreign artworks. To find out more about the exhibits and opening hours of the Guangdong Museum, be sure to check their official website. 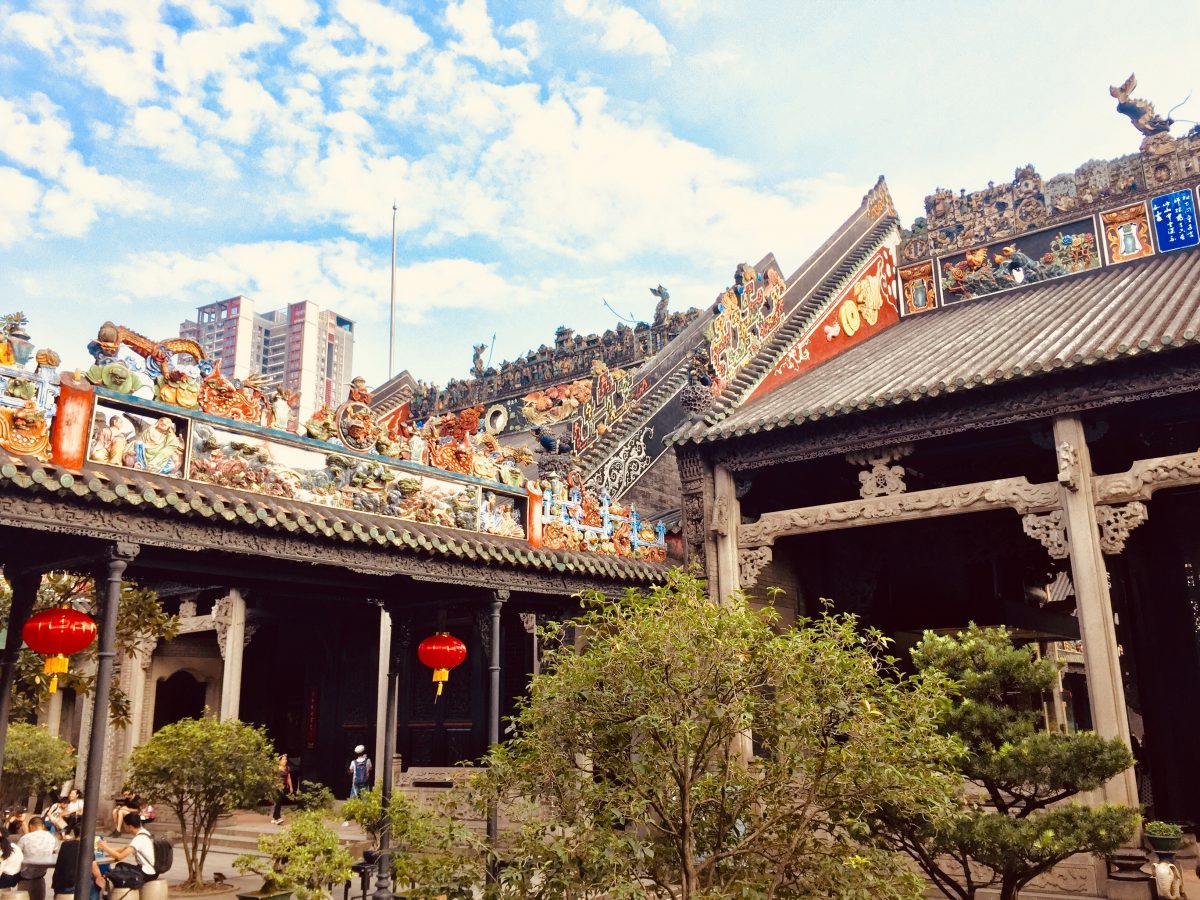 Photo by Ting Wei for Pexels

Today, it houses the Guangdong Folk Arts Museum. The Academy comprises of about 19 buildings, 9 halls, and 6 courtyards. The museum itself houses several Chinese artefacts including pottery, wood art, and other craft items. The building itself is am impressive work of art as it’s made up of traditional Guangdong architectural structures. If you’re visiting the Chen Clan Academy, make sure to plan at least an hour to have sufficient time to see everything the museum has to offer. 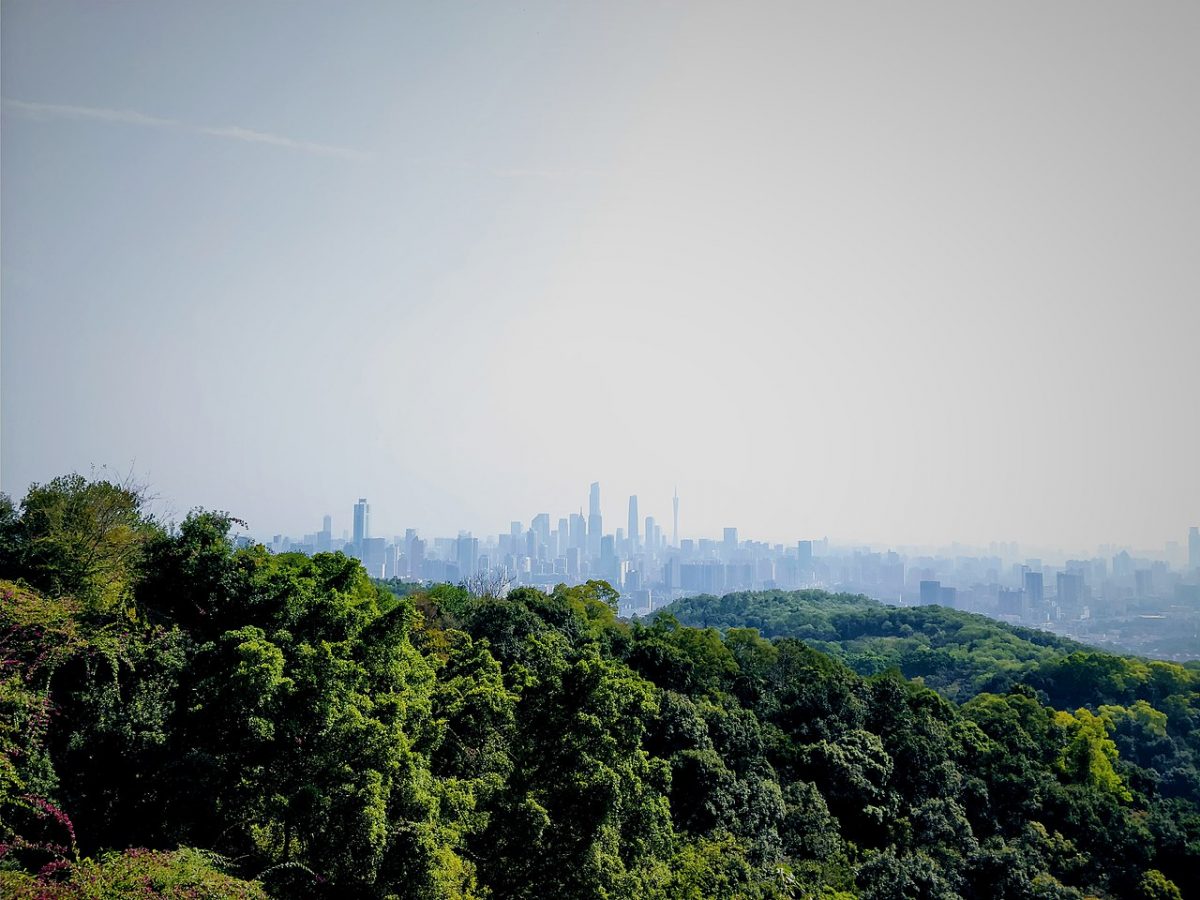 With 30 peaks, the Baiyun Mountain, also known as the White Cloud Mountain, is a beautiful place to visit when you’re in Guangzhou. The mountain is named after the white cloud that floats above the highest peak which is about 382 meters (or 1,253 feet) above sea level.

The mountain serves as a perfect platform to enjoy scenic views of the city. It also offers a plethora of hiking routes. In total, 7 scenic areas, with parks and gardens, are available, with the convenience of electrical cars for those who cannot hike for long. To really enjoy the mountain, make sure to visit the region in the spring when the flowers are in full bloom and the fresh mountain air will invigorate you.

Temple of the Six Banyan Trees 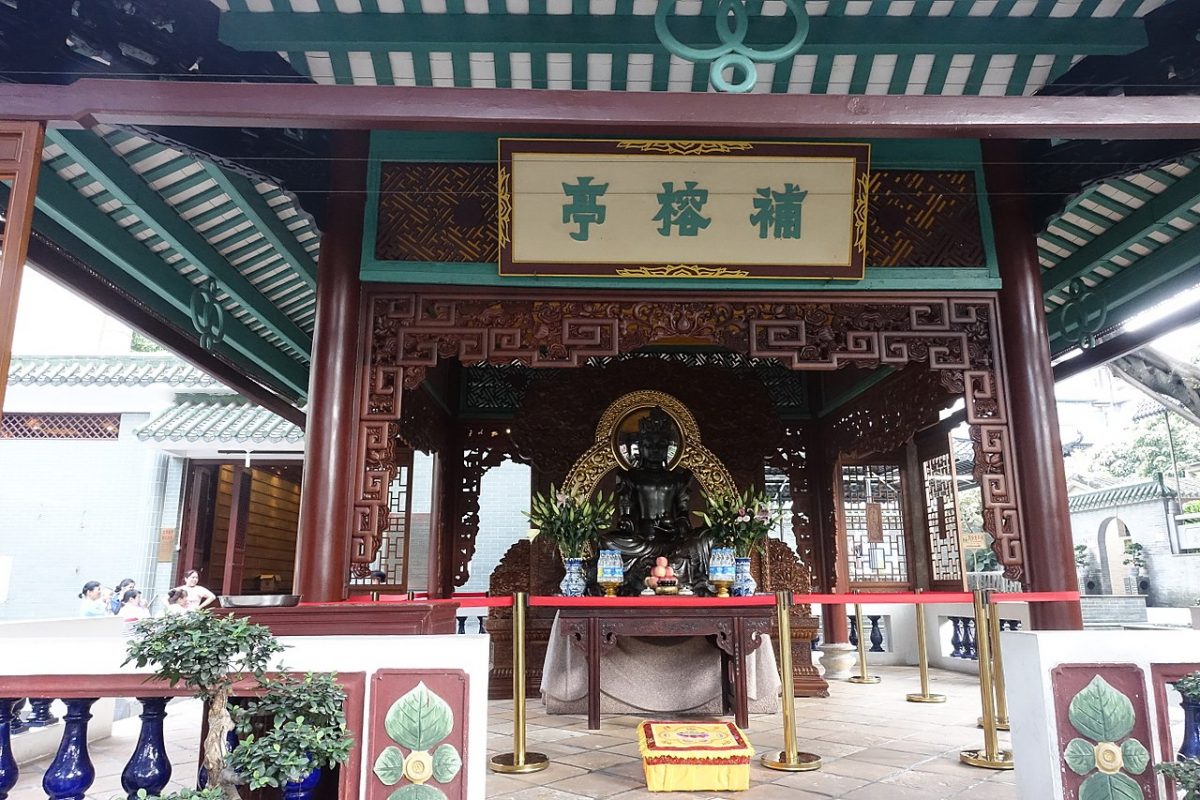 In this sacred place, visitors will admire astonishing historical relics, including a magnificent Flower Pagoda that’s about 57,6 meters in height. Visited by huge crowds of Buddhist believers, the temple is a fascinating place where one can enjoy the marvellous natural scenery and experience spiritual peace.

Listed among the top ten tourist attractions in Guangzhou, you can take a bus or taxi to downtown where the temple is located. 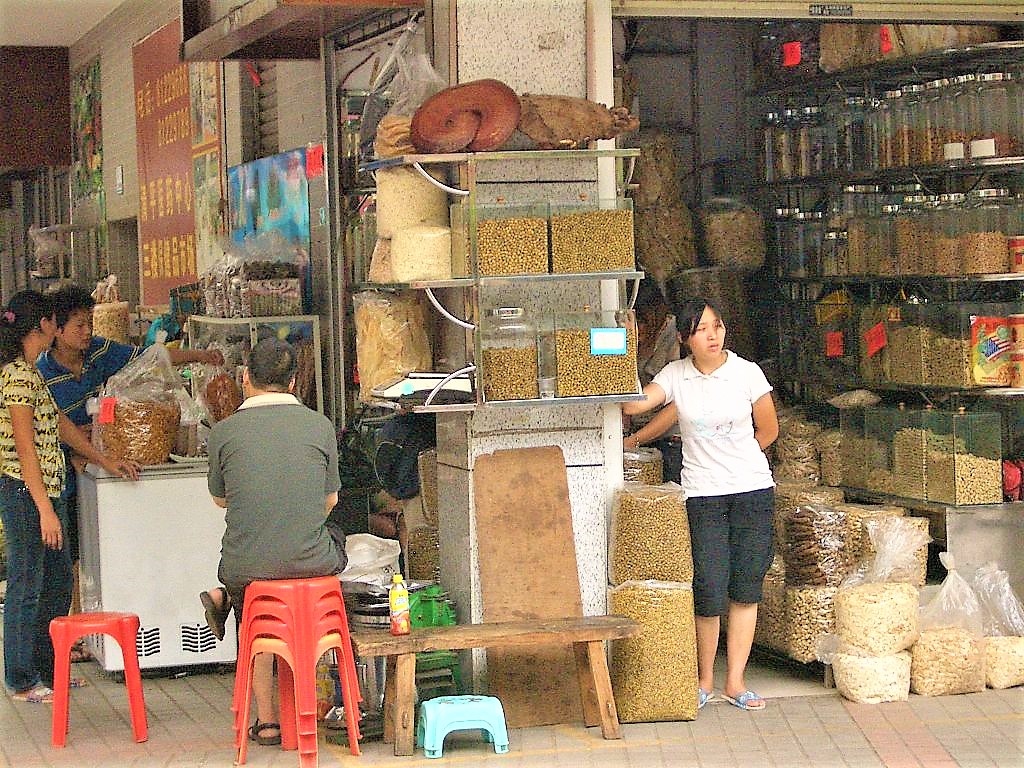 Photo by Vmenkov on Wikimedia Commons

If you have an interest in Chinese medicine or simply are intrigued by how locals live, the Qing Ping Market is an interesting destination for a visit in Guangzhou.

This place offers an interesting insight into the authentic life of the locals. Here, you will find an insane amount of traditional Chinese herbs, preserved food, dried seafood, and other interesting ingredients. If you really hope to score something, you can get a local guide to walk you through the place and find little treasures to bring home with you.

Featured as one of the top 80 museums in the world, the Museum of the Mausoleum of the Nanyue King is home to the tomb of Zhao Mo, the second King of Nanyue State. This 2000-year-old tomb was only discovered in 1983 and over 1000 rare relics and burial artefacts were found inside.

These rare wonders are on display in the exhibition room next to the tomb. The king’s burial suit itself is even made up of 2291 pieces of jade crystals. They include objects such as jades, weapons, everyday utensils, and even musical instruments.

These objects help paint a picture of what life was like during Zhao Mo’s reign. A treat for history and architecture lovers, the museum is an excellent site to discover the history of Guangzhou. 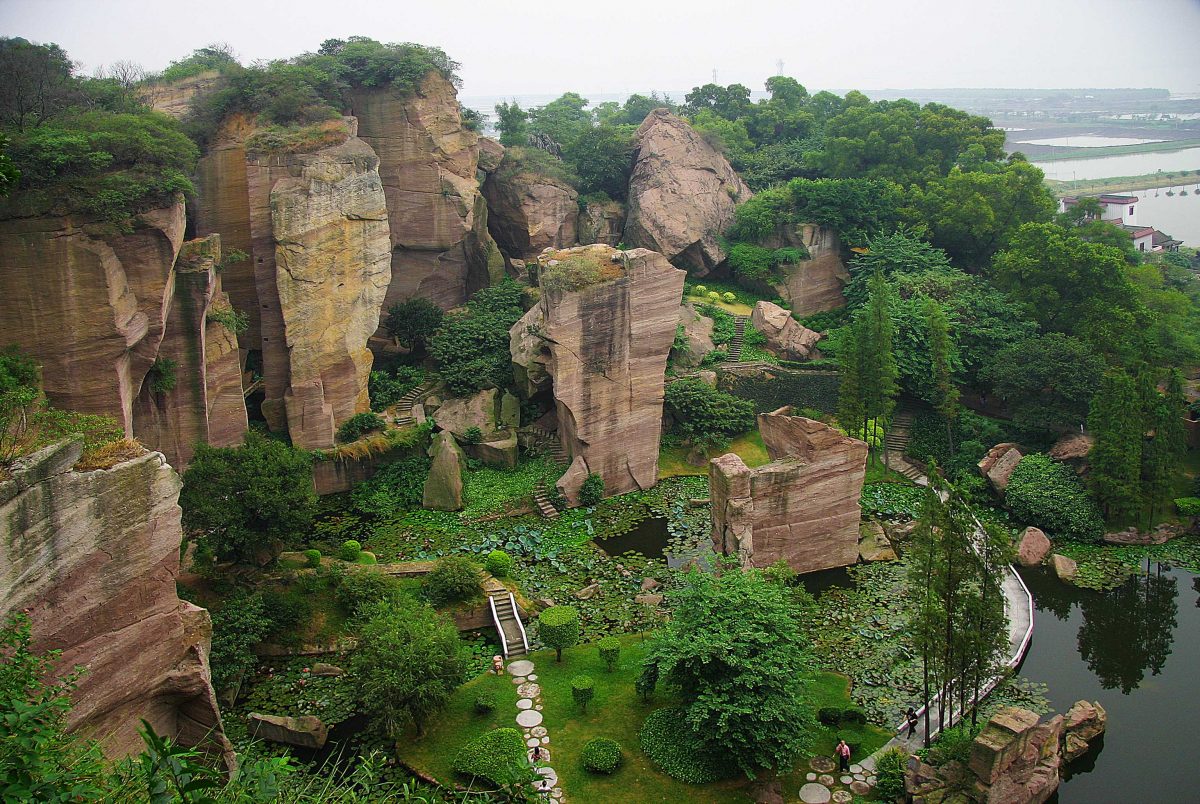 Lotus Hill is a beautiful place located in Panyu, Guangzhou, sitting net to the Pearl River Delta. Blessed with beautiful scenery and gorgeous landscape, Lotus Hill is the perfect day trip destination. The site is only 45km south-east away from Guangzhou. The site comprises of four attractions. These are the Lotus Tower scenic spot, the Lotus City scenic spot, the Kwan Yin Fairy Land and the site of a stone landscape. The hill features steep cliffs, strange rocks, and unique caves for visitors to discover.

The period between June and August is an exceptionally magical time to visit Lotus Hill. The reason is that over 100 kinds of lotus flowers will bloom during this period. The Lotus Festival also takes place during this period where you’ll see huge parade floats drive by.

Photo by Akeyvip on Pixabay

While the river may not be much by day, a night cruise is certainly a nice way to explore the city. Enjoy beautiful views of Haizhu Square, the famed Canton Tower, as well as the surrounding skyscrapers when they are lit by neon lights. 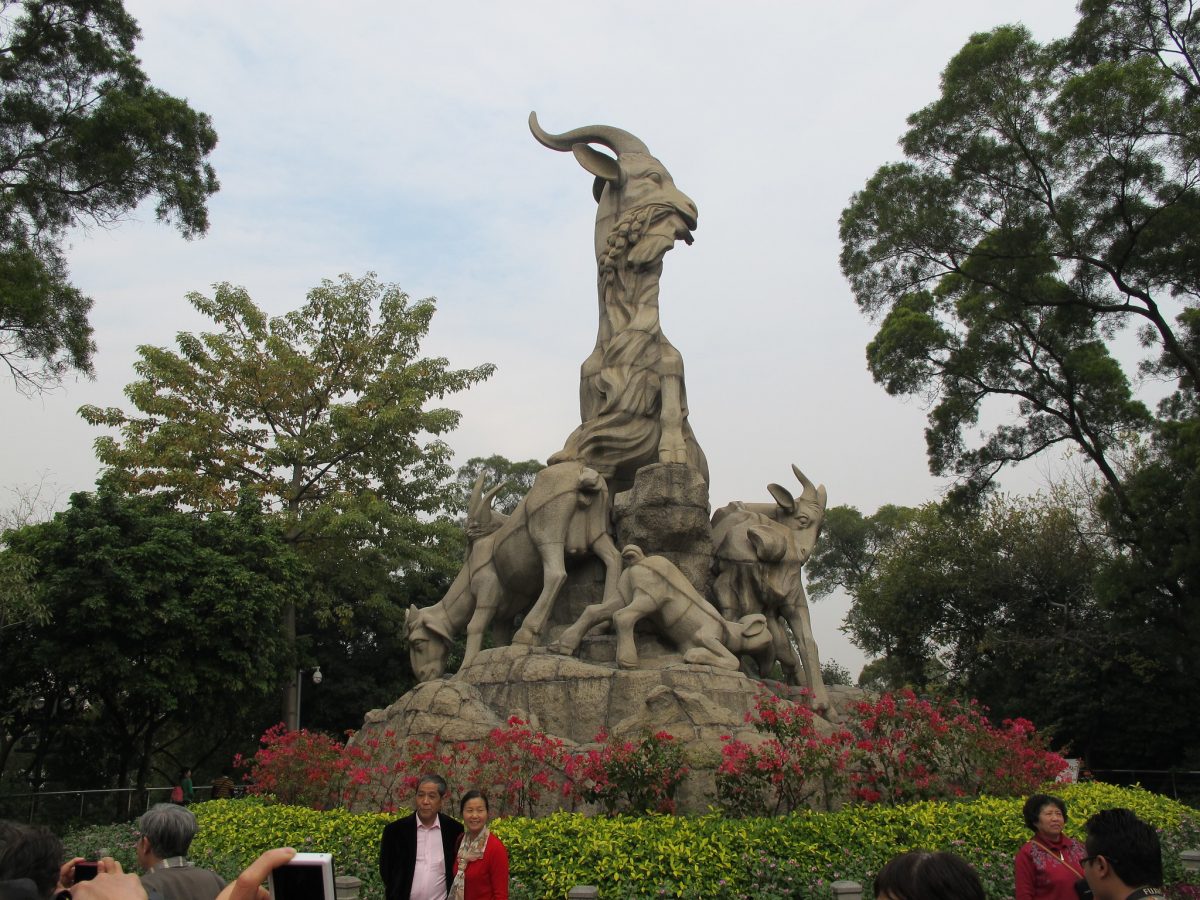 Covering an area of 860 000 square meters of land, Yuexiu Park is definitively one of the best places you can enter for free when you’re in Guangzhou. This vast urban park is home to the Five Rams Sculpture, the symbol of the city. Take some time out and enjoy the fascinating landscapes. You can indulge in the laid-back atmosphere while taking a leisurely stroll around the towering trees, artificial lakes and the small hills.

The Guangzhou Museum is also located within the park, so make sure to drop by. There you can admire the impressive collection of historical and cultural artefacts. Furthermore, the park houses an amusement park, a swimming pool and gymnasium making it perfect for a day out with the family. It also has several restaurants and food stalls. 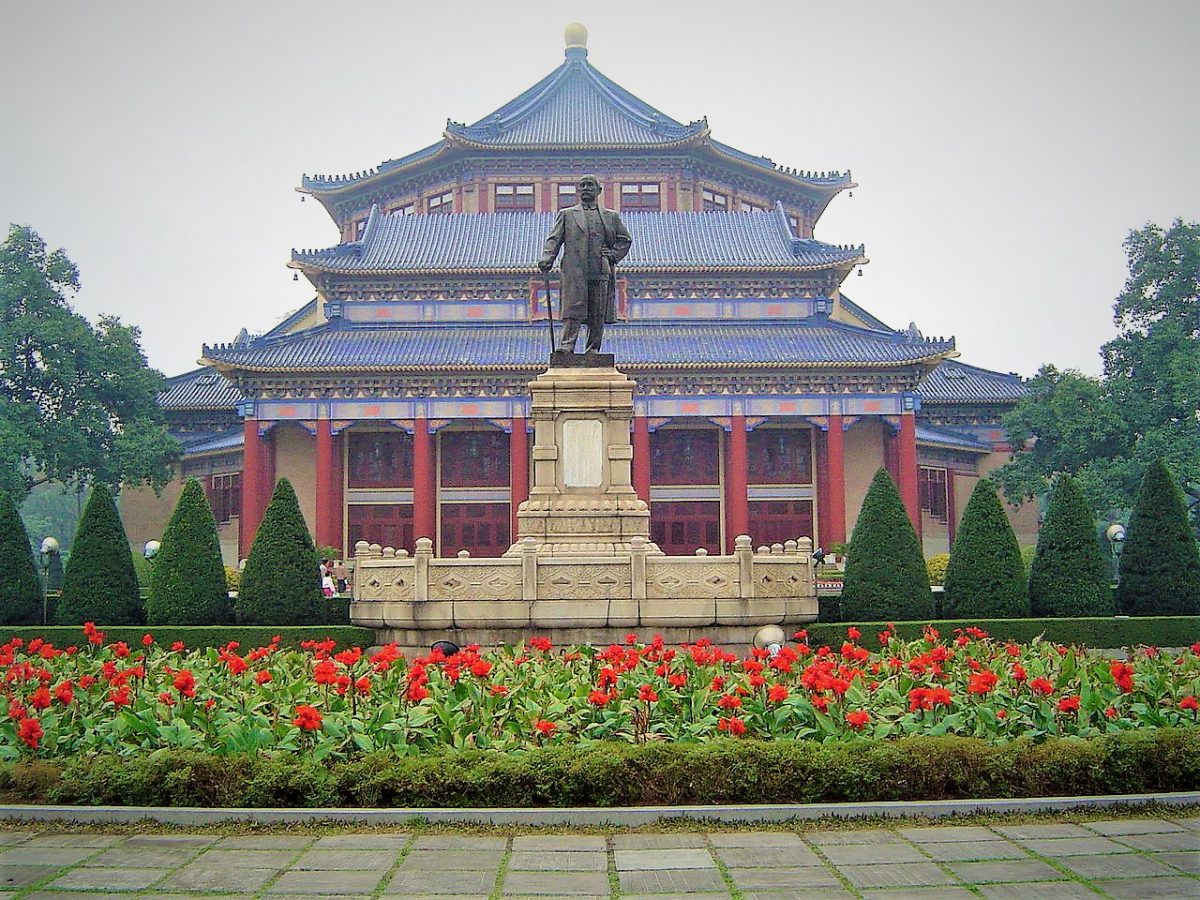 Visitors will find the Sun Yat-sen Memorial Hall, another landmark of Guangzhou, within a short distance from Yuexiu Park. This memorial hall was constructed to commemorate the deeds of Sun Yat-sen, the man behind the Chinese democratic revolution.

Here, one can find a huge quantity of materials, historical artefacts and records, as well as a magnificent bronze statue of Sun. The main building of this memorial hall is also quite impressive. Its floors are designed with blue glazed tiles and its pillars are made of red terrazzo. Accessible via public transports, visitors can enter the memorial hall for a price.

Find out more about the Memorial Hall, you can check for more information here.