Wales may be the second smallest country in the United Kingdom, but it compensates its compact size with plenty of things to see, including its many castles. In fact, Wales has often named the Land of Castles. No less than 400 of these medieval monuments dot the country.

Part of the local history and landscape, these castles vary in terms of purpose and size. While some have successfully endured the test of time, others are only mere ruins. Nonetheless, a visit to Wales is incomplete without exploring them. Join us on a tour of 10 of Wales castles you should definitely visit. 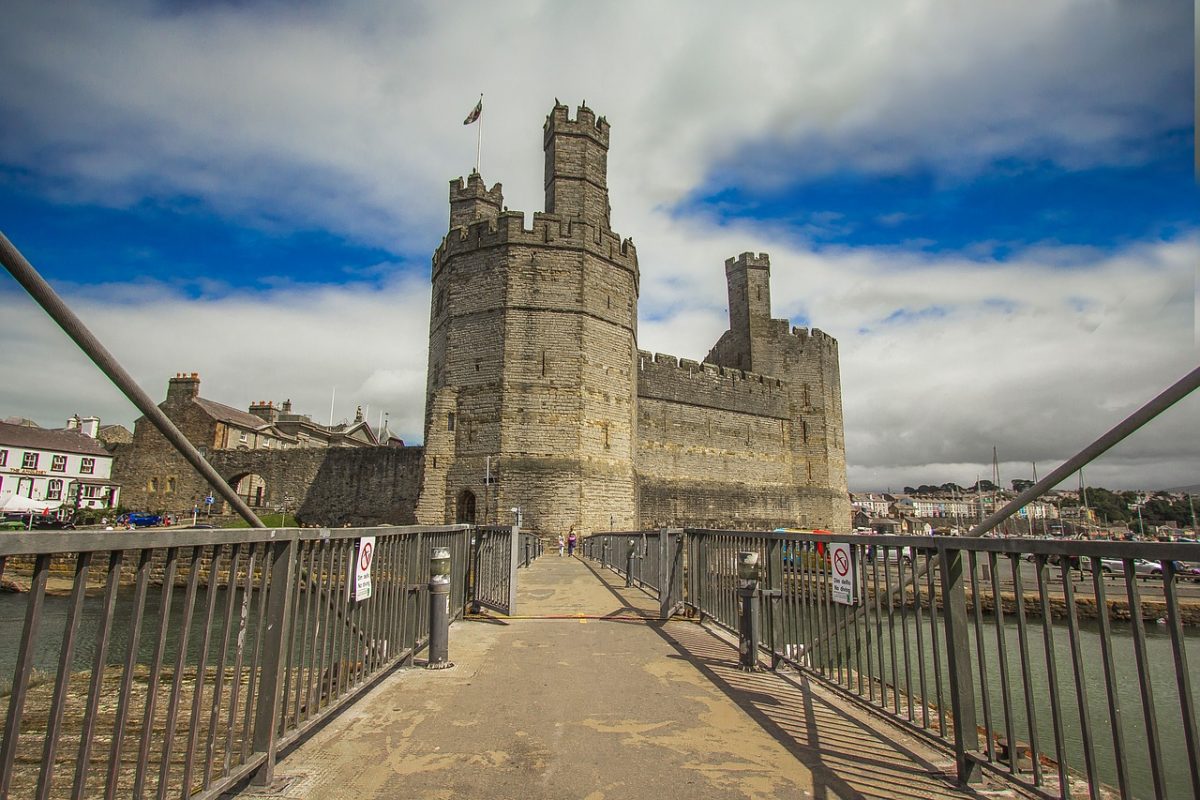 Photo by Diego Torres on Pixabay

One of the top tourist attractions in Wales, Caernarfon Castle, is undeniably one of the most impressive castles in the UK. It’s situated on the mouth of the River Seiont in the Northwest of the country. A prime example of the Edwardian castle, its construction started in 1283 with the outer wall bordering the entire settlement still standing today.

Epic in scale and grandeur, Caernarfon Castle bears strong historical importance. It was the administrative centre of North Wales under King Edward I of England. It was also the birthplace of King Edward’s son, who was dubbed the Prince of Wales, a title that is given to the heir to the throne ever since.

The castle lost its importance by the time the Tudors came to power and slowly fell into oblivion until the 19th century despite how imposing and gigantic it was. 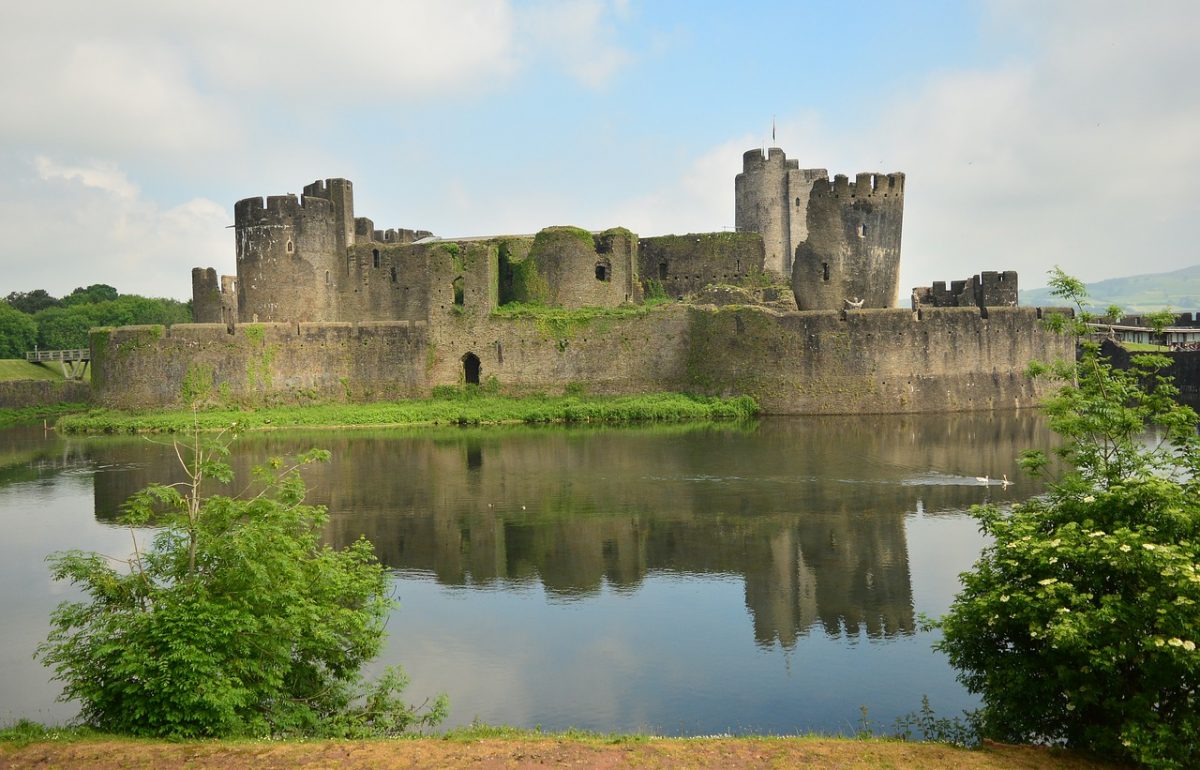 Photo by Caohuyensa on Pixabay

Situated on an island on a massive estate in the county of Gwent is Caerphilly Castle. Many have considered it to be the first truly concentric castle built in Wales. A fully-flooded moat encloses the whole complex. The inner ward with its corner towers is surrounded by an outer wall with an attached guardhouse.

Construction of the fortress began in 1268 by lord Gilbert de Clare, who built it on the site of an ancient Roman fort. Covering over 30 acres, the castle is actually the largest castle in Wales, and second in the whole of Britain, behind Windsor.

This magnificent fortress stood tall for several centuries although, by the middle of the 16th century, it was in ruins. One of the main highlights of the castle is the leaning south-eastern tower, which leans at a 10-degree angle. 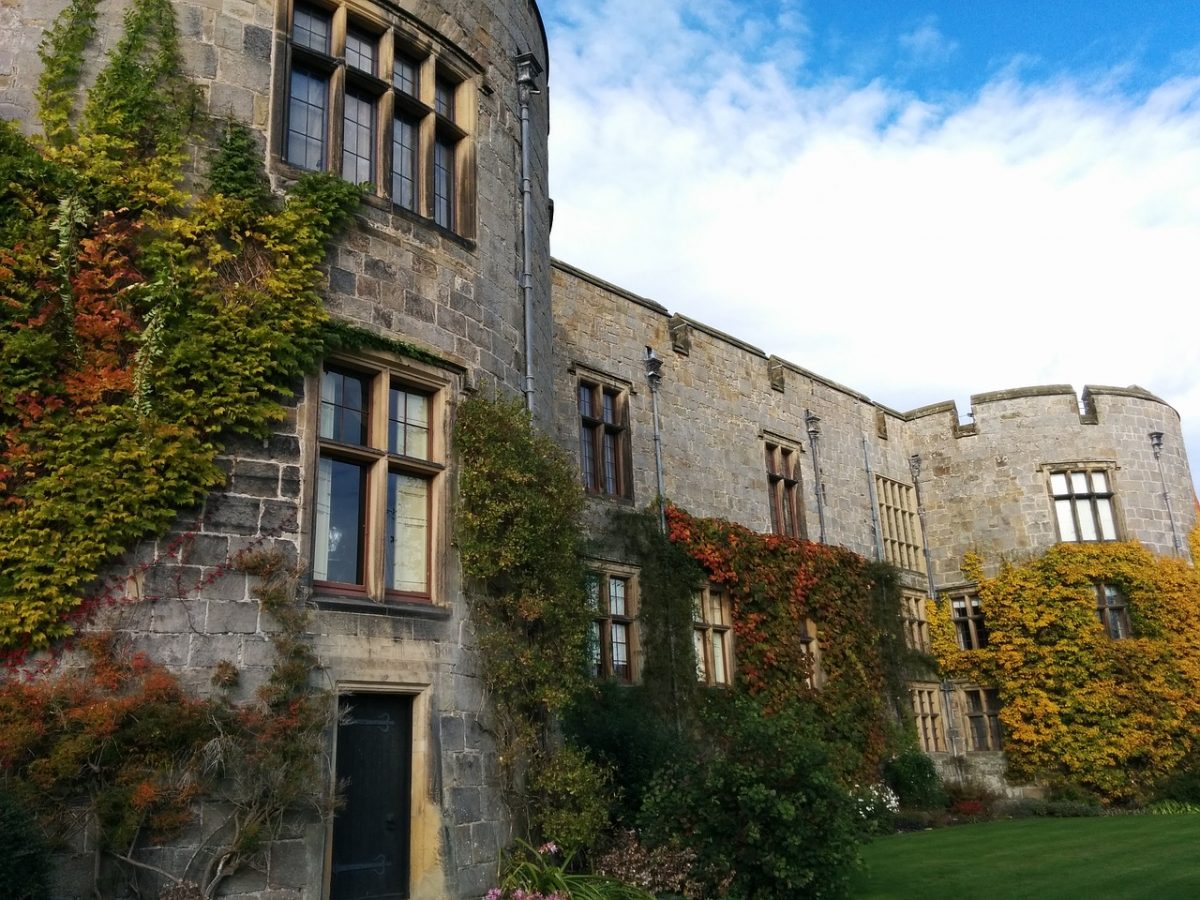 Photo by Chrispritchard on Pixabay

Chirk Castle was first constructed in 1295 by Roger Mortimer de Chirk. It’s part of King Edward I’s chain of fortresses across the north of Wales. The castle was located on purpose on a strategic position overlooking the entrance to the Ceiriog Valley, on the Welsh and English borders. As such, it always had an important role in keeping the Welsh people under English rule. The castle main features are the rounded towers and 5-meter thick walls that made it impregnable.

To this day, Chirk Castle is the only Edwardian castle that is still inhabited. It has been the family home for the Myddelton family for nearly 400 years when they took ownership of the fortress in 1595. In 1910, Thomas Scott-Ellis fell in love with the castle and negotiated a lease with the Myddelton family. The lease lasted until 1946 when he returned to its Scottish estate and passed away later the same year.

Today, Chirk Castle belongs to National Trust and is open to the public between March and October. During this time, visitors can explore the impressive fortress but also its famous gardens.

Learn more about Chirk Castle on the dedicated website of the National Trust. 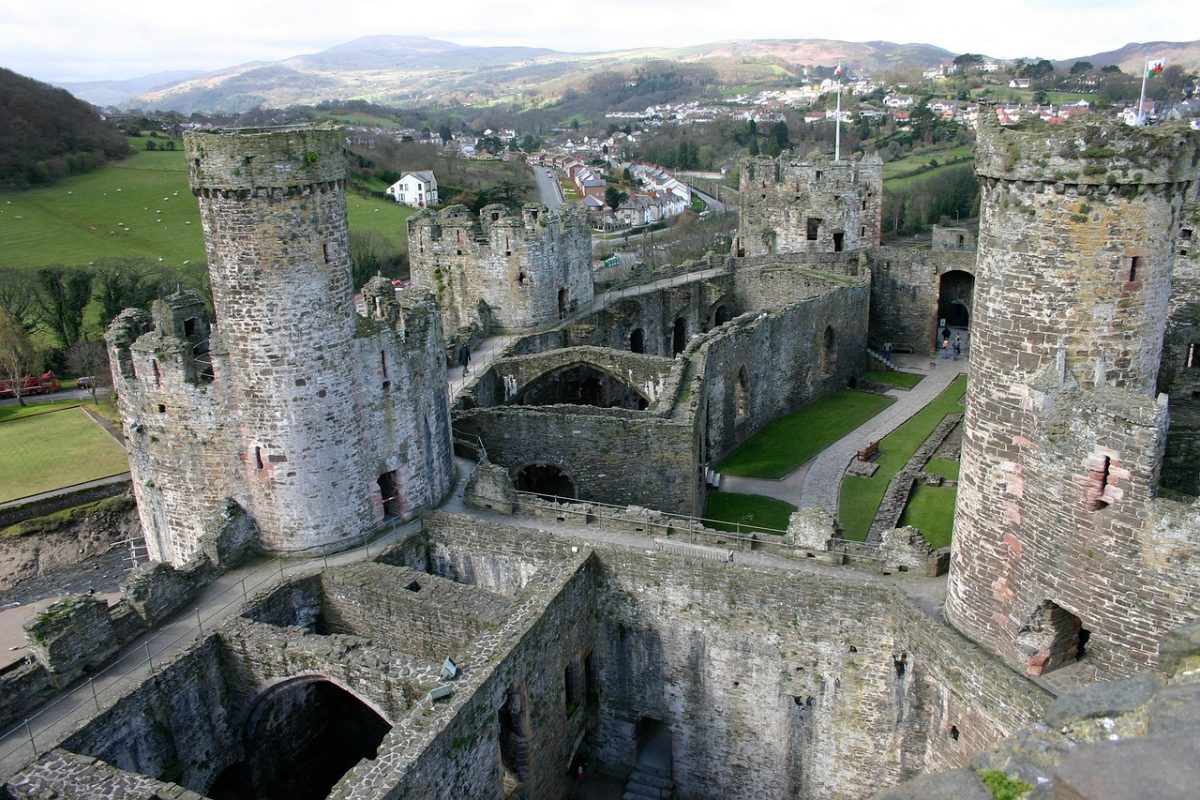 Another Edwardian castle, Conwy Castle is located on the northern coast of Wales, in the quaint village of Conwy. Built between 1283 and 1289 by architect James of St. George, it sits on a rocky hill by the Conwy river.

Conwy Castle is another example of the medieval defensive architecture, with 2 fortified gateways, massive walls, and 8 massive towers. The castle played an important role in several wars. This is the reason why it’s considered one of the great fortresses of medieval Europe.

As Conwy Castle features a fantastic set of royal residential anywhere in the UK, visitors will get a strong insight into the life of the medieval monarchs.

For more information about Conwy Castle, have a look at the dedicated page on the Welsh Government’s historic environment service website. 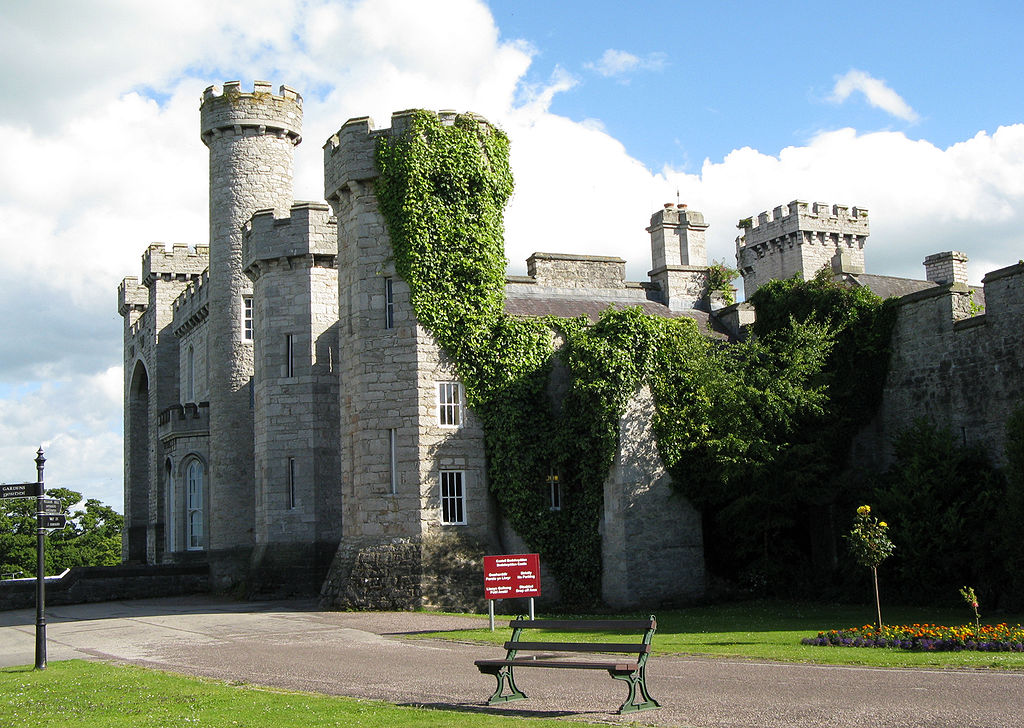 Located in north-east Wales and surrounded by a vast area of parkland with elegant gardens is Bodelwyddan Castle. Constructed around 1460 to serve as a manor house, Bodelwyddan Castle was unlike the majority of castles in Wales which were built for defensive purposes. The castle was bought by Sir William Williams in 1680 after it was commissioned by the Humphreys family of Anglesey.

The castle that stands today is actually the result of a refurbishing and extension work of the former castle by a descendant of Sir William Williams during the 1830s. Furthermore, during the First World War, the castle was turned into a hospital for wounded soldiers.

A girls’ private school leased the castle sometime in the early 1920s until 1982. The county council bought the castle a few years later to serve as a museum and an independent registered charity known as the Bodelwyddan Castle Trust was later established. However, in recent years, the castle was put on the market. Although the manor and art gallery is now closed, the parkland and gardens of the castle are open to visitors. 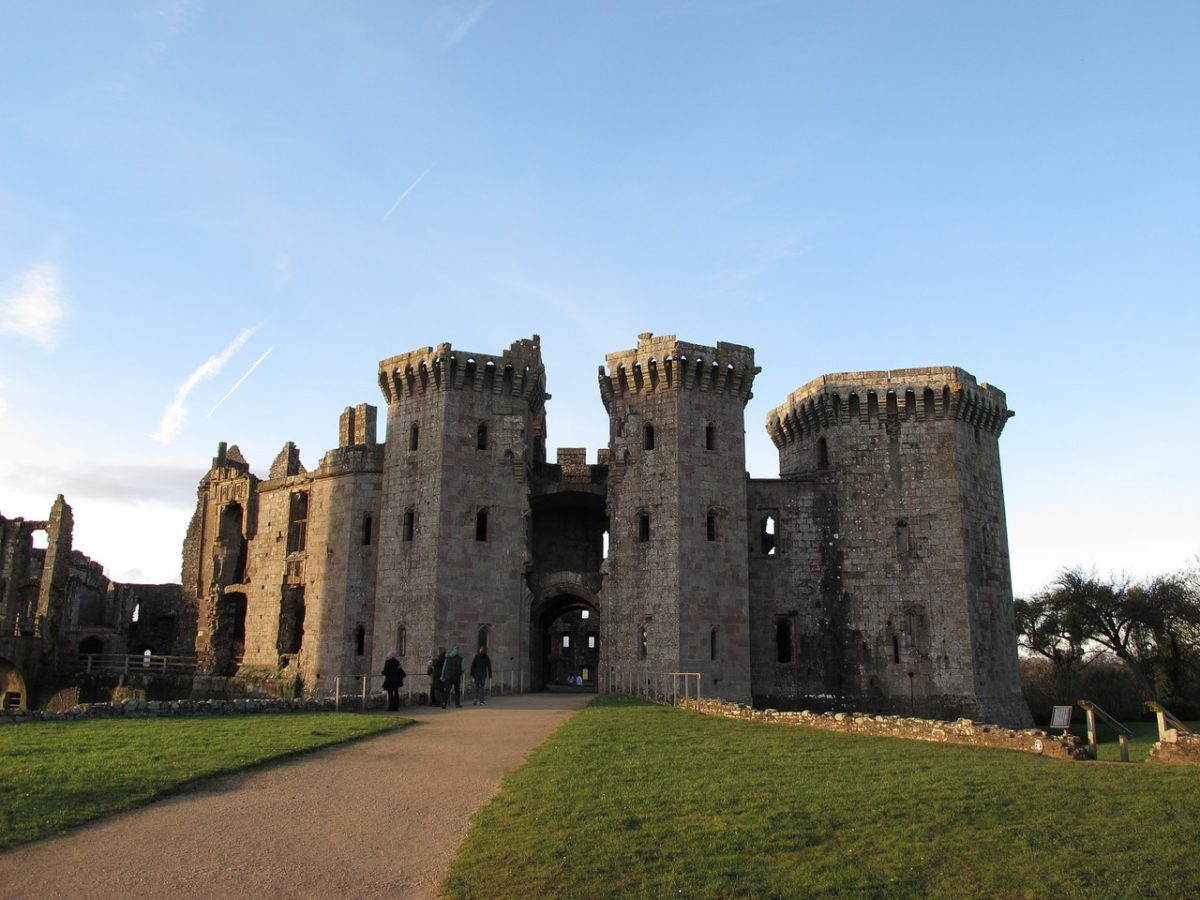 Photo by Allie Photos on Pixabay

One of the last true medieval castles built in Wales, Raglan Castle is located in the county of Gwent. The castle was built by Sir William ap Thomas in the 1430s. Upon his death, the castle was passed on to his son Sir William Herbert, who added a gatehouse and a set of residential quarters. Machicolations were also built on top of the gatehouse. This allowed people to drop objects onto attackers below. The castle was finalized in 1525.

But it didn’t stop there. In 1589, the castle entered its last phase of construction under William Somerset, who had inherited the castle. He added the Long Gallery and reshaped the gardens to give them a Renaissance style.

In 1646, parliamentarian forces during the English Civil War took over Raglan Castle. As a result, the castle suffered serious damage. Minor renovation efforts were made during the 18th century and in 1938, Henry Somerset entrusted the castle to the Commissioner of Works when it became a permanent tourist attraction. Today, visitors can explore the ruins and visit the gatehouse, the hall, the cellar as well as the long gallery and south gate.

Learn more about the Raglan Castle on the website of the historic environment service of the Welsh Government. 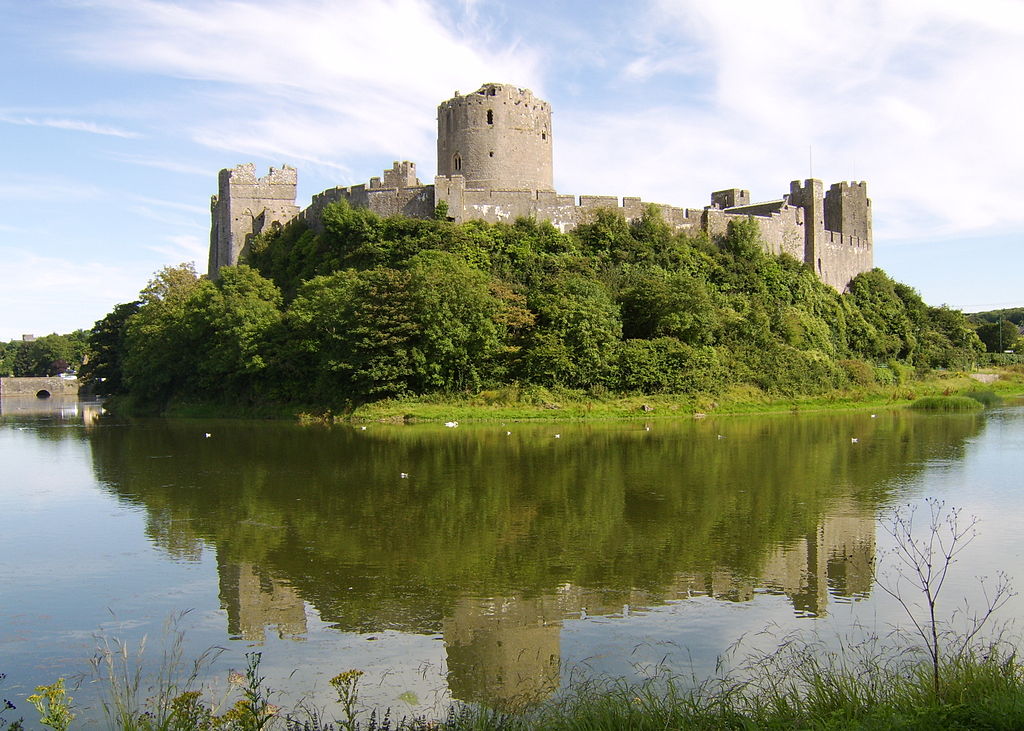 Photo by Athina on Wikimedia Commons

Pembroke Castle, situated in the county of Pembrokeshire, is the largest privately-owned castle in the country. It was first built in 1093, therefore, it can claim to be one of the oldest castles in Wales.

The castle is known for being King Henry VII’s birthplace. During the 15th and 16th centuries, it was a place of peace until the English Civil War, when Pembroke sided with the Parliament, unlike the rest of Southern Wales.  The parliamentarian forces saved Pembroke Castle after it was besieged by Royalist troops.

In the 17th century, the castle fell into decay. During the early 1900s, it was fully restored and was opened to the public. In fact, visitors can learn about the fascinating history of the castle through a series of staged tableaux. Pembroke Castle is often used as a filming location due to its well-preserved state. 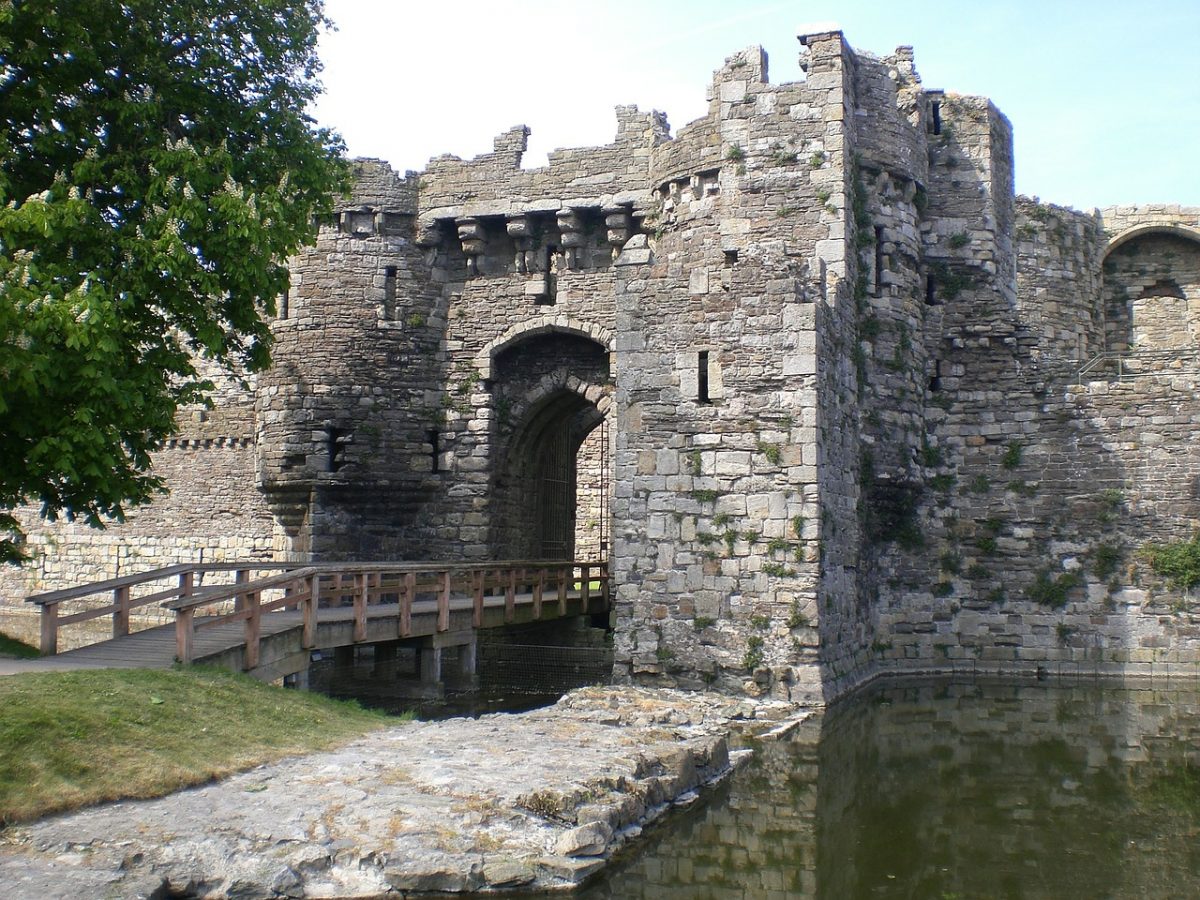 Photo by Cee Kay on Pixabay

Built-in 1295 and located off the mainland’s northwest coast on the Isle Anglesey, Beaumaris Castle is a fine example of the concentric castle design. Constructed by architect James of St. George for King Edward I, the castle features a moat connected to the sea, as well as round corner towers, staggered entrances and portcullises.

The castle, despite never being completed due to a lack of resources, remains an imposing medieval fortress with symmetric concentric walls. As the last of the castles built by King Edward I’s favourite architect, Beaumaris Castle includes a smart system of docks and water-gates which allow the castle to be supplied by ship during a siege.

Today, visitors can explore the grounds and admire the ingenious design of the castle defences. Beaumaris Castle may have never served its defensive purpose but it still remains an impressive sight to behold.

Learn more about it here. 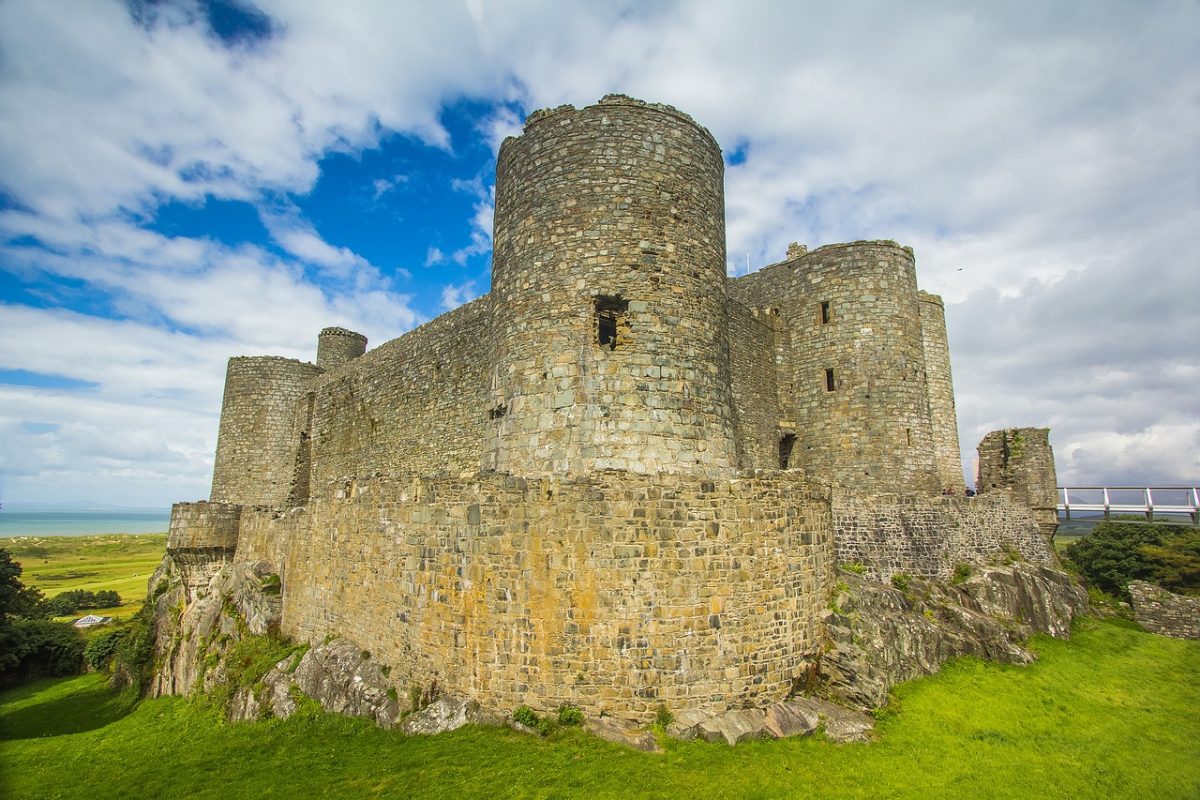 Photo by Diego Torres on Pixabay

Located in the northwestern part of Wales, Harlech Castle is located amidst the breathtaking landscape of Snowdonia. The castle is yet another project of King Edward I whose purpose was to secure the English rule in Wales. Constructed near a cliff, Harlech Castle serves as a natural barrier. It was built between 1283 and 1289.

Harlech Castle played an important role during several wars over the centuries following its construction. The castle was used during the English Civil War for military purposes. Despite the Parliamentary forces ordering its destruction, several parts of the castle survived to this day.

Harlech Castle is open to the public with special events organized during the summer. It is certainly a place that children would enjoy as they get to explore and roleplay as knights from a time long gone.

Find out more about the opening hours of the castle and the many events here. 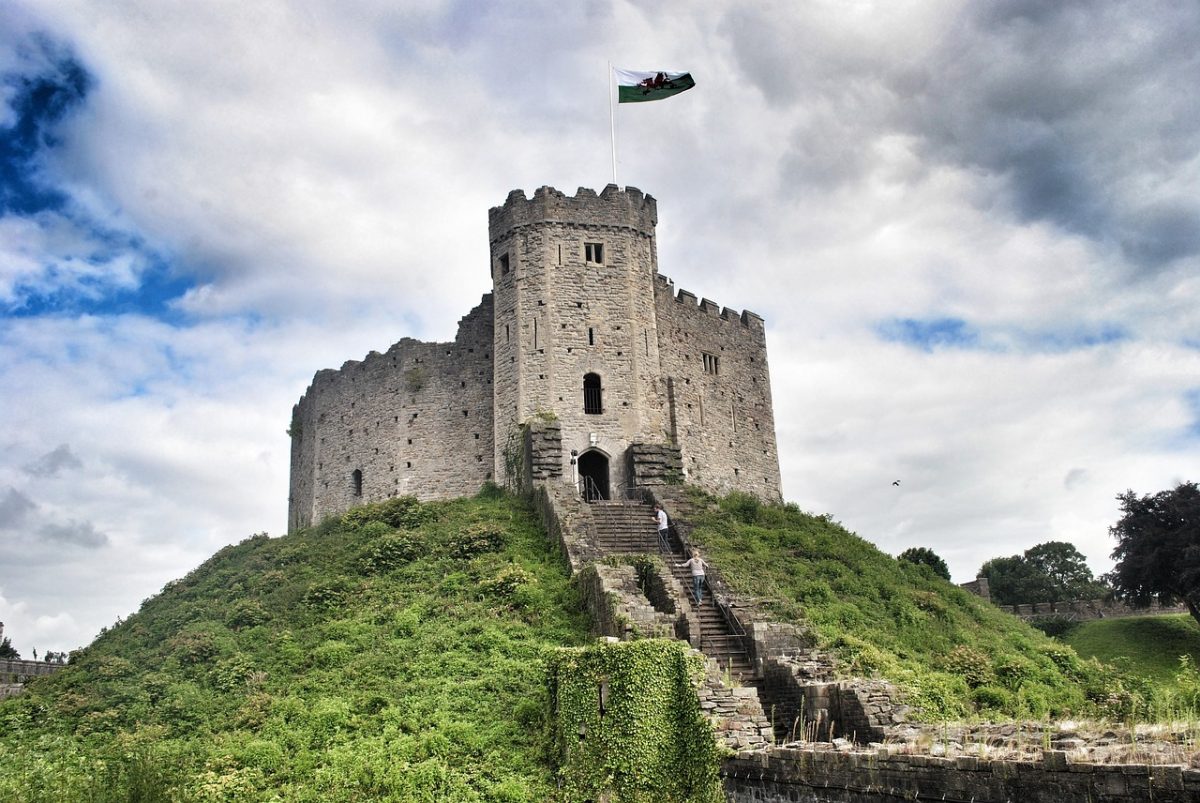 Photo by Joshua Miranda on Pixabay

Finally, if you are in Wales, chances are you will visit Cardiff, the capital. And even there, you will be happy to know that there is even a castle in the city. Erected on the banks of the Taff River, Cardiff Castle has a history that dates back to the Roman occupation when the castle was in fact a fort.

Over the centuries, it had several uses, including a Norman castle, a medieval fortress, and a Gothic residence. Now operating as a tourist attraction, the Cardiff Castle is actually one of the most popular sights in the capital. Classed as a grade I listed building and as a scheduled monument, the Cardiff Castle invites visitors to explore the elegantly refurbished apartments and explore the beautiful parks on the castle grounds.

A wide range of cultural and social events takes place in this castle. These include various musical performances, with the capacity to accommodate over 10 000 people.

Plan your visit and learn more about the castle here.

Visiting Wales castles is certainly one of the best ways to understand and get to know the country’s rich history. While we only share 10 of them, the country counts around 400 castles, some in good condition and some in ruins. But it shouldn’t stop you from visiting them. Besides, it is a great excuse to explore the country and admire its variety of landscapes. So make sure to include a few of these when you plan your visit to Wales.

Ultimate Guide To Planning A Trip To Komodo National Park For First-Timer
Prev: 7 Reasons To Pick... Next: Korean Food ̵...