For 780 years, Spaniards fought to expel the Muslim invaders that had taken control of most of the Iberian peninsula. That period, from 711 to 1492, is called La Reconquista, a time where the battles to control and defend the land were constant.

It was during La Reconquista that most of the castles that today remain in Spain were built. There are around 2,500 fortified buildings left and visiting a few of them is a wonderful experience.

Without further ado, here’s the list of the top 10 castles in Spain that you should visit. 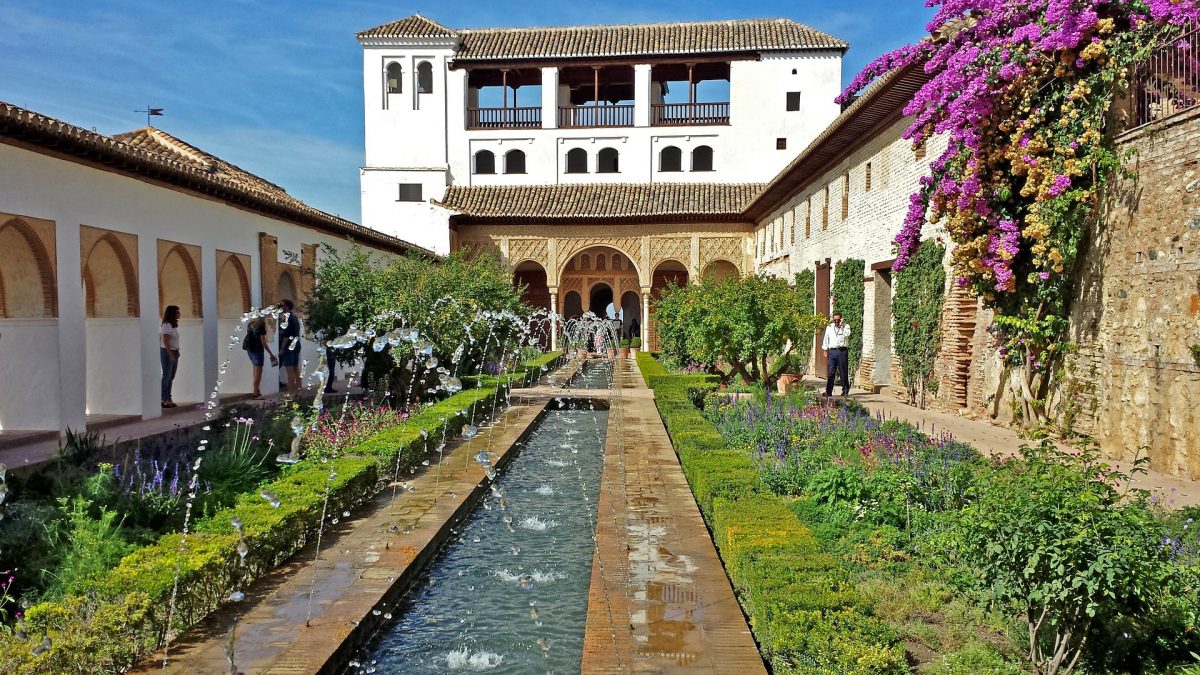 Photo by Ralf Kronenberger on Pixabay

Located in Granada, La Alhambra is undoubtedly the most beautiful of all Spanish castles. It is both a fortress and a palace that has evolved over centuries from a small Roman fortification to the full splendorous building we can enjoy today.

It was during the 13th century that the Emirate of Granada built its current palace and walls. La Alhambra became the Royal Court of the Catholic Monarchs, Ferdinand and Isabella, once the Christian Reconquista was completed in 1492. A new palace was erected in its place during the renaissance period.

Its current structure comprises two main areas. The first is the Palatial City which is made of six palaces and two tower-palaces. The second is the Generalife which was built between the 12th and 14th centuries and used by the Muslim royalty as the place to rest.

A UNESCO World Heritage Site, La Alhambra is one of the most visited sites in Spain. Therefore, it’s advisable that you book your visit ahead of time. For additional information, visit La Alhambra’s official website. 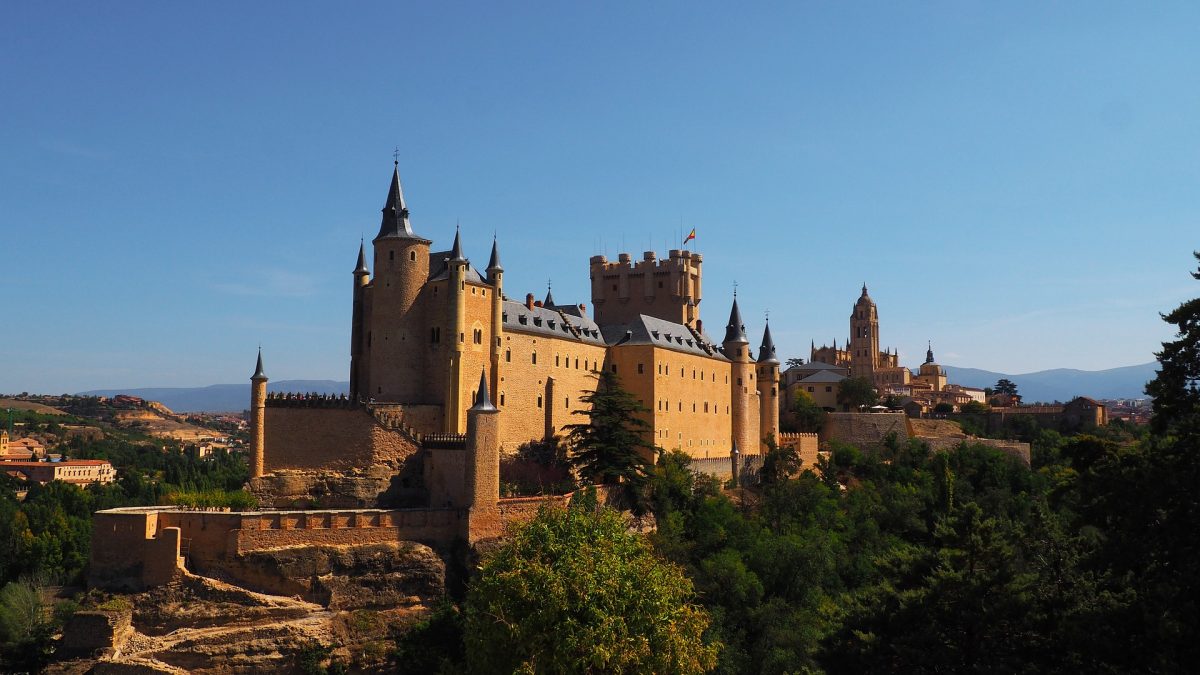 Built on a rock formation above the confluence of two rivers, El Alcazar is one of the most distinctive castles in Spain. Its bow-shaped design inspired some of the castles seen in many Disney movies. Viewed from afar, it really looks like something out of a fairy tale.

The Alcazar is located in Segovia, a wonderful medieval city which itself is a UNESCO World Heritage Site. During your visit, make sure you don’t miss the Roman aqueduct in this area.

Just like El Alcazar, Castillo de Coca is also located in the province of Segovia. The castle was first built in the 15th century and has incorporated both Moorish and Gothic styles.

One of the few Spanish castles not constructed on a hilltop, a moat surrounds all its perimeter. Visitors can visit some of the castle’s main attractions including the chapel, the weapons room, and the Tower of Homenaje. 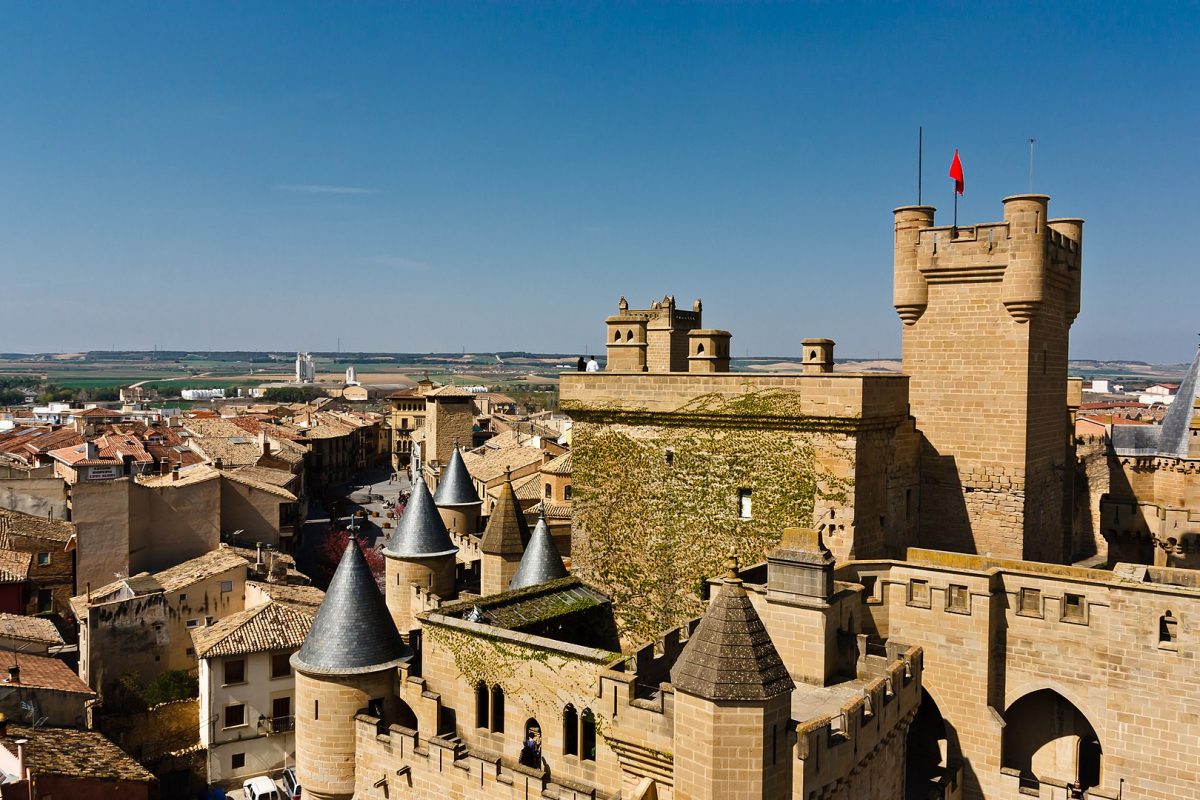 Also known as the Royal Palace of Olite, Castillo de Olite is one of the most majestic medieval castles in Europe. It was the seat of the Court of the Kingdom of Navarre until its union with Castile in 1512.

As the palace was never conceived as just one building, one of its charms is the somewhat chaotic design. It comprises of three core sections: the Old Palace, the New Palace, and the Church of Santa María La Real. The Old Palace was converted into theParador de Turismo, one of the 97 state-run luxury hotels set in historic buildings such as old castles or monasteries. 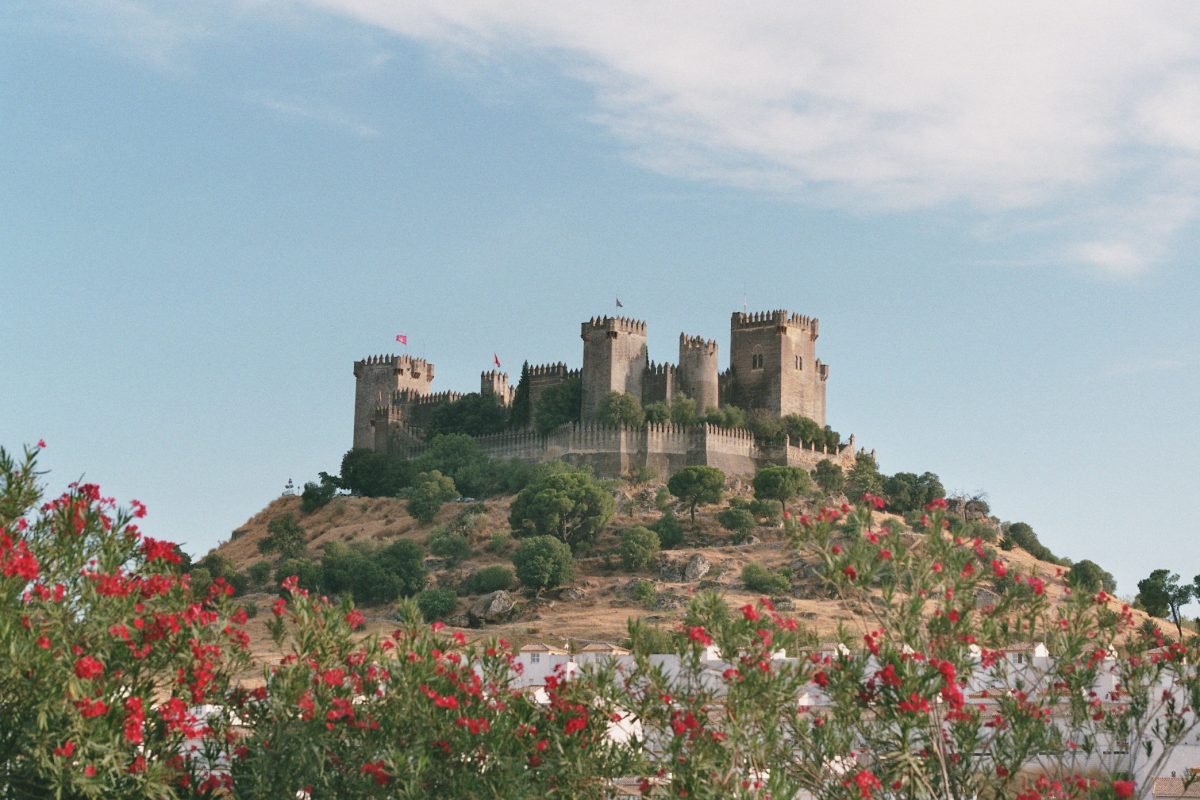 Photo by Rabe! on Wikimedia Commons

Its location on a hill 250 meters high near the Guadalquivir River gives the Castillo de Almodóvar del Río its strategic value. Previously a Roman fort, its current structure dates to the 8th century, although it has undergone several restorations since then. In 756, this fortress became the estate of the Moorish Prince Al’delMalik Ben Qatan and from 758 onwards it passed into the hands of the Emirate of Cordoba in the reign of Abderraman I.

These days, visitors can explore the castle either through self or guided tours. Fun Fact – parts of Season 7 of the HBO series Game of Thrones was filmed at the castle. 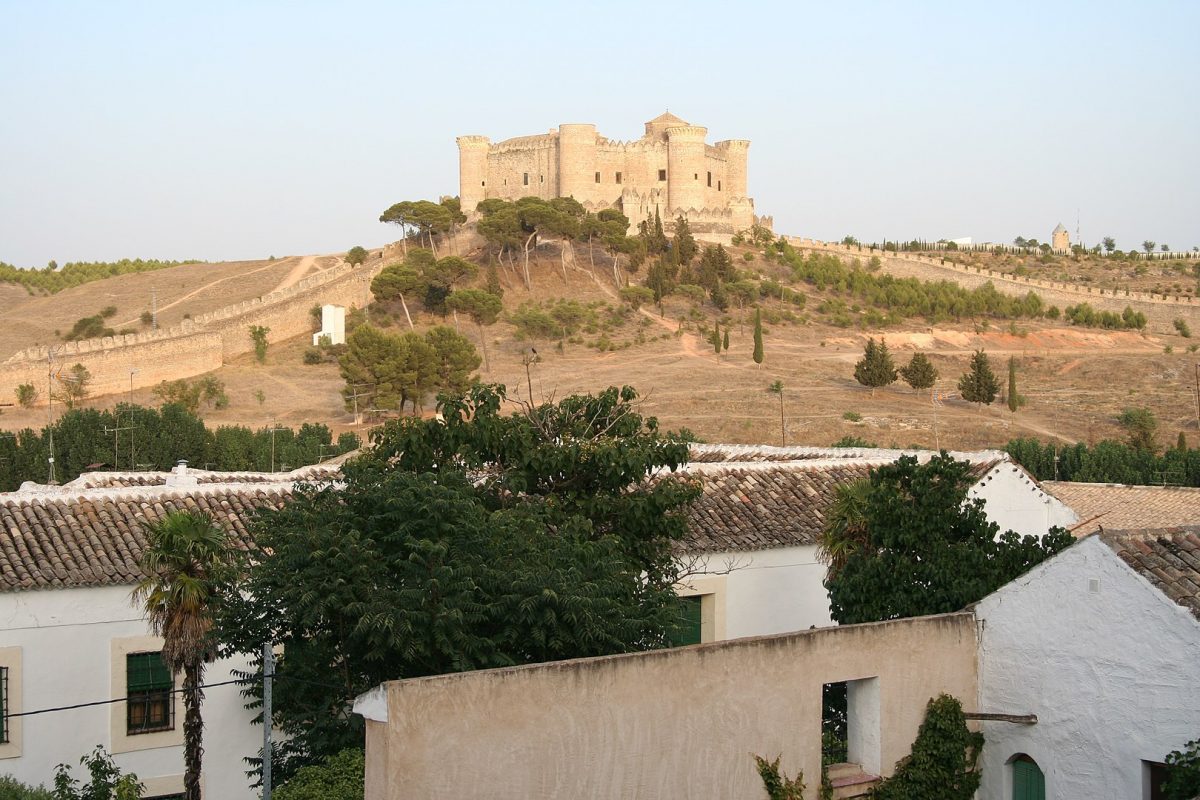 Photo by Josemanuel on Wikipedia Commons

Castillo de Belmonte is a medieval castle on the hill of San Cristobal, just outside the village of Belmonte in the province of Cuenca. Don Juan Pacheco, the first Marquis de Villena, ordered the construction of the castle during the second half of the 15th century. He built it during a time of convulsions and infighting in the Kingdom of Castile.

The fortress was practically abandoned between the 17th and 18th centuries and was more or less ruinous by the early 19th century. The heiress of the house of Villena, Eugenia de Guzman, better known as the Empress Eugenia de Montijo, began a restoration project in 1857, keeping the exterior in the original style but updating the interior to fit modern tastes.

In the 1980s’, Director Paul Verhoeven shot several scenes of the 1985 film, Flesh & Blood at the castle. Visitors can take a tour around the castle and enter several rooms. 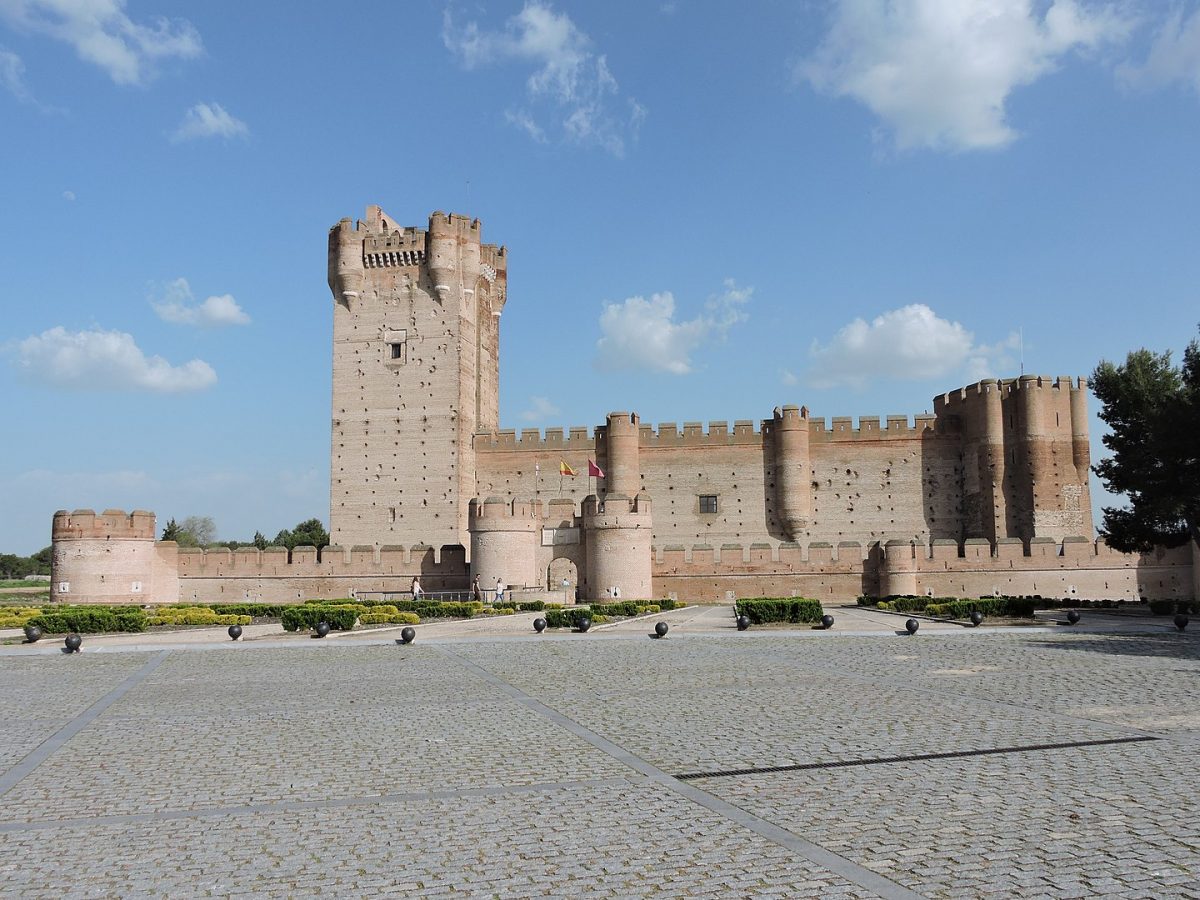 In Medina del Campo in the province of Valladolid lies Castillo de la Mota, one of the biggest castles in Castile.  The keep (the largest tower of the castle) contained part of the archives of the crown during the reigns of Enrique IV and Juana I.

The castle has a trapezoid floor plan. It’s made up of two great walls, one outside which served as a barbican, full of underground shooting galleries, and one inside with a wide parade ground. The coat of arms of the Catholic Monarchs of the year 1483 is visible above the arch of the main gate. The keep is 130 ft high. Additionally, the chapel of Santa Maria del Castillo is also on the ground floor.

Inside, there are interesting works of art such as the Hispano-Flemish triptych and a beautiful ivory crucifix from the 17th century. A large-scale copy of a map of 1500, by Juan de la Cosa, can be seen in another room. 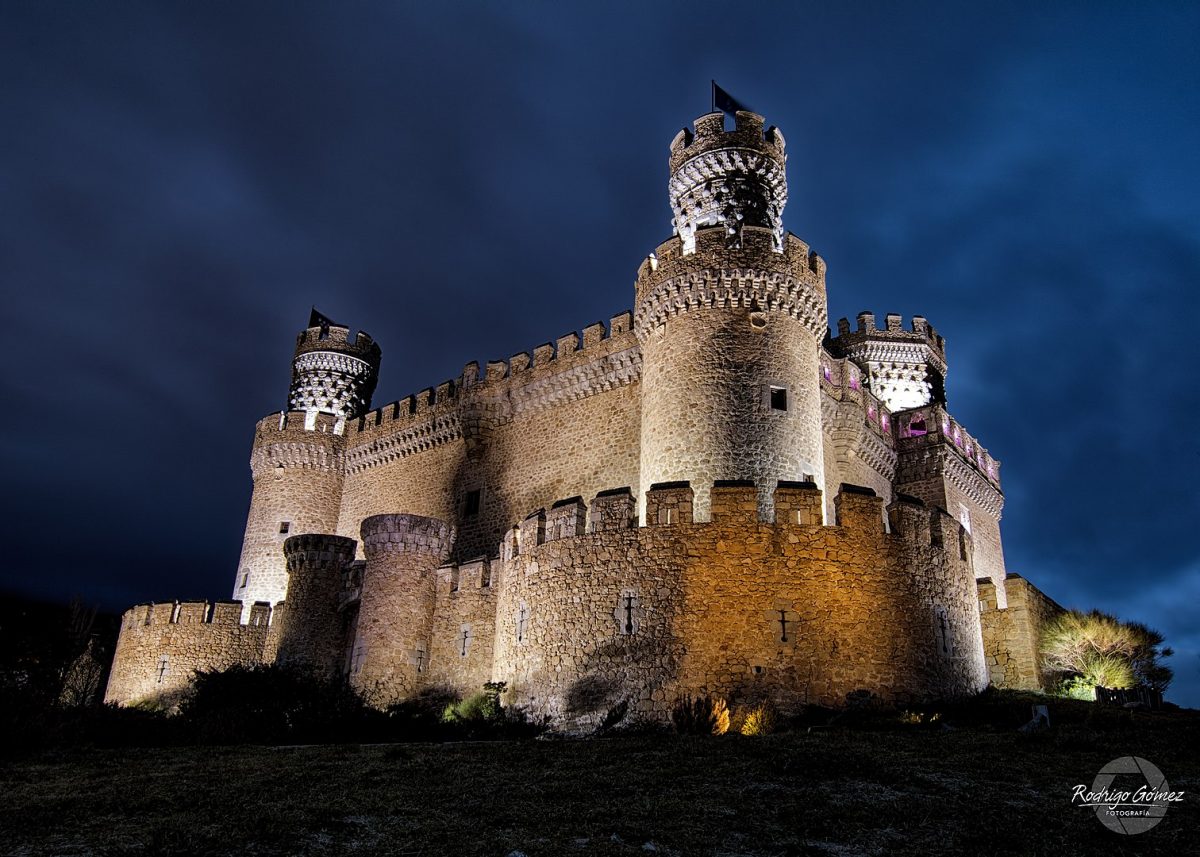 Also known as Castillo de Los Mendoza, it is a palace-fortress erected in the 15th century in the town of Manzanares el Real, at the foot of Sierra de Guadarrama mountain range north of Madrid.

Robust curtain walls encase the palace within. An imposing gatehouse protected by flanking towers gives way to the interior after crossing the old moat. This quadrangular castle is constructed entirely of granite stone. It has four circular towers and its vertices are designed in the Isabelline Gothic style. The main hexagonal tower is one of the highlights. Additionally, the Gothic gallery on the first floor was considered a fine example of Spanish military architecture.

Guided tours are provided for visitors to the castle. Visitors can also take a self-guided tour so that they can explore the castle at their leisure. if For additional information, visit the castle’s official website. 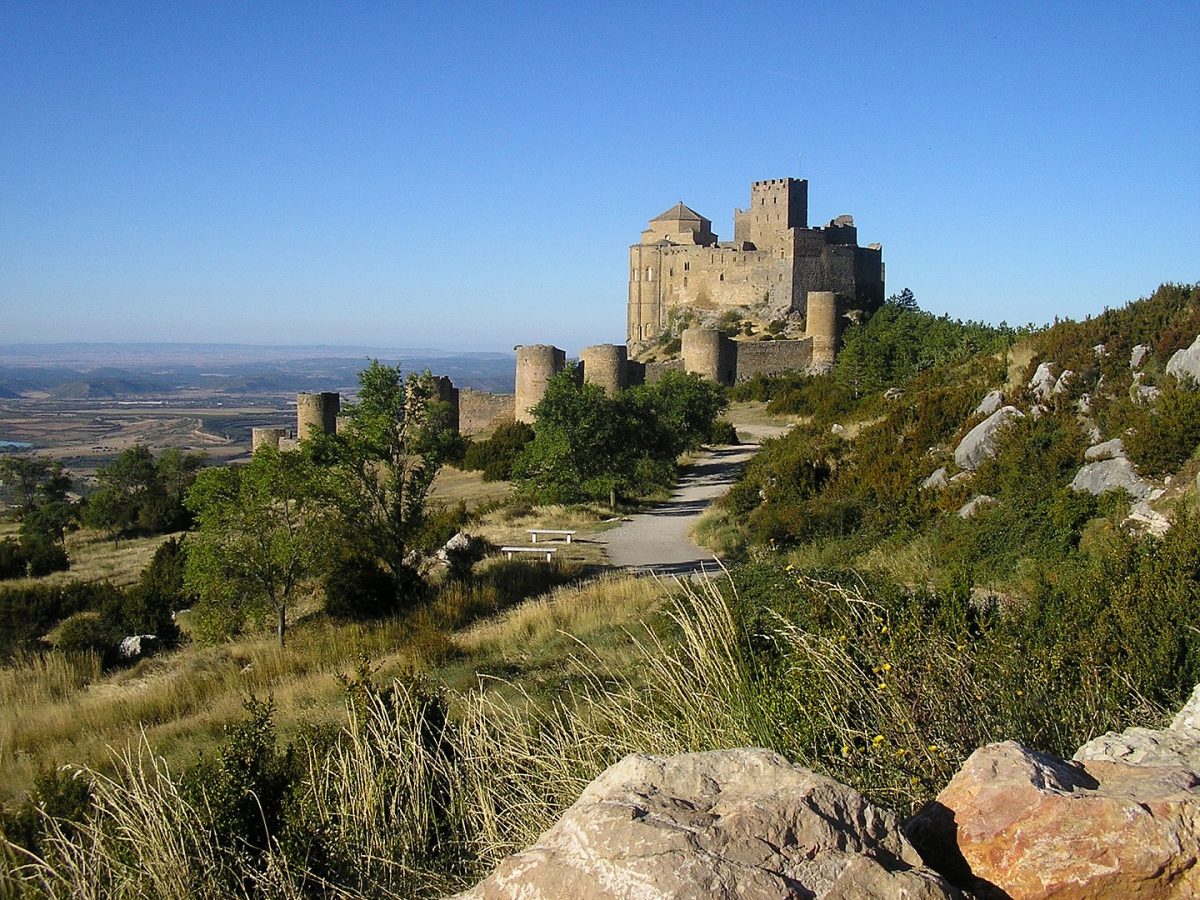 Photo by Juango on Wikimedia Commons

Castillo de Loarre is a Romanesque Castle and Abbey in the province of Huesca, in Northern Spain, and one of the oldest castles in the country. First built during the 11th and 12th centuries, it was positioned on the frontier between Christian and Muslim lands. This gave the castle strategic importance. The first of the two major building programmes began around 1020 when the surrounding lands were reconquered from the Muslims by Sancho el Mayor.

Due to its location on a rocky outcrop, Loarre could not have one unified structure. Instead, it’s a collection of buildings with curtain walls surrounding it. Towards the end of the 11th century, an additional chapel was built in the Romanesque style just outside the castle walls. During the 13th or 14th century, the castle had eight towers and outermost walls were added to its vicinity.

The 2005 film Kingdom of Heaven starring Orlando Bloom, Jeremy Irons and Liam Neeson had several scenes shot at the castle. Today, visitors can explore the many buildings within the castle such as the Church of San Pedro and the Queen’s Tower. For additional information, visit the castle’s official website. 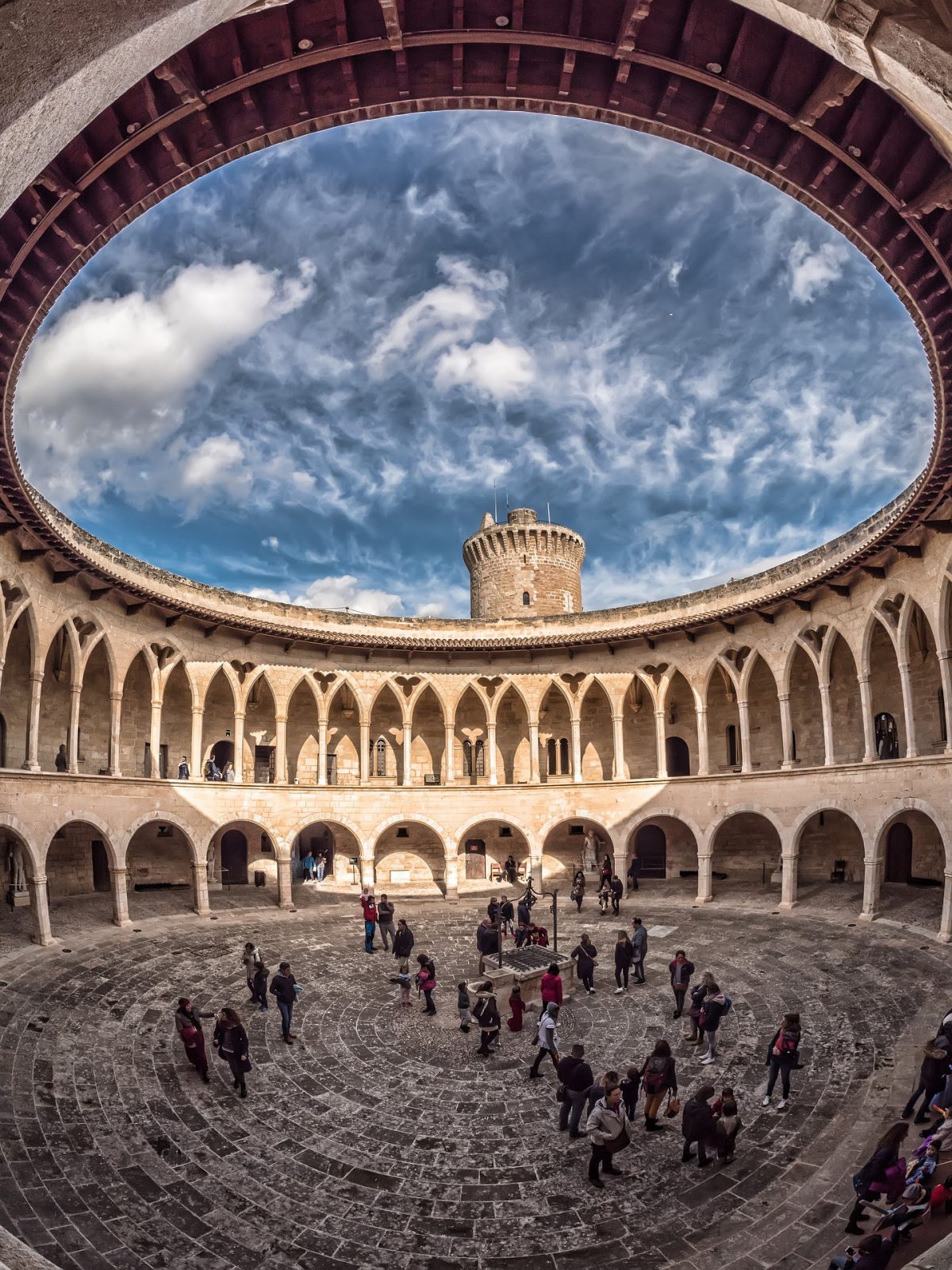 Built in the early 14th century on the instructions of King James II of Mallorca, this magnificent castle is located in the outskirts of the city of Palma, on a hill some 112 meters above sea level. Its design was unique at the time: a Gothic building that forms a perfect circle around a courtyard of the same shape with four big towers facing the four cardinal points. It is the oldest circular castle in Europe.

The circular inner yard is a magnificent sight to behold. All its dependencies face this yard through a gallery of gothic semi-circular arches. The castle also served as a prison for many years. Today it serves as Palma’s History Museum attracting visitors from all over the world. For additional information, visit the castle’s official website.

No matter where you are travelling to Spain, a medieval castle would be near awaiting your visit. This list has taken you to some of the most stunning and well-preserved castles in the country, but there are also more castles worth considering. Do not miss the opportunity to travel in time to medieval Spain.

25 Amazing Things To Do In Chiang Rai, Thailand
Travel Destinations